TLOK is a cell shaded action adventure beat em up game where you get to fight with various bending fighting combinations and to top it all off you get to control an animal which controls just like Crash bandicoot’s animals do in the first PSone games.

First impressions of the game were mixed, i mean, it is smooth and moves like a dream but it felt stale and boring and definitely not like a typical Platinum Games type of game. Luckily i decided to fire the game up again and gave it a second chance and once i got into it and started learning combos and bending tricks, well the game started to become fun.

You start off with all (4) the bending powers but as soon as you have fun they take them away and you will have to play for hours without them. Well, it takes about an hour or so before you get a proper combo move, bold move by Platinum as the game ain’t all that special until then.

I must admit that i had no idea who Korra was before i tried the game and i am not sure if i really want to get to know the universe any better after the game either but i can safely say that the style is awesome albeit very clean.

TLOK is filled to the brim with cutscenes and yet i never felt them being boring i still decided to skip them all in my second playthrough.

My second playthrough was basically a speed run as i just wanted to snag a few more trophies really so that was one of the reasons why i skipped the videos but still…..

One of the things with Anime games is that they tend to feel quite “clean and empty” and TLOK is no different here. When there are no enemies to fight then all you do is run around in clean and “dead” environment with absolutely no activity what so ever.

Oddly enough it works even if the only thing you do is run to the next enemy or try to reach a hidden treasure or whatever.

Boss fights, a major letdown really. They tend to be very same’ish and most of the time it is just to block and counter-attack, skill is required although not needed as you can grind your way through them.

The worst thing about the boss fights is that there is only like 3-4 of them and they include the same type of enemy or style of the former one you fought.

Most of the time (even in the second playthrough) i ended up just going crazy on them, bending is fun and all but in boss fights it becomes tedious fast.

You will eventually meet up with a dog/polar bear animal thing named Naga, the animal companion stages are quite reminiscent to the Crash Bandicoot animal stages of the first PSOne games. Exciting right? well, sadly the stages in this game are boring and quite annoying.

The reason why i am not that huge of a fan to these sections is that they involve some sharp turns and the overall design simply do not fit its speed, it is too fast without powerups and when you use the powerups then you will die in a heartbeat. (maybe it requires some special Asian superpowers…)

the game is packed with various stuff to equip but you can only equip 4 of them at the same time. These things cost a lot of game points and to be quite frank here, most of them were useless to me so i ended up using the first 4 i bought throughout my 2 complete playthroughs.

Platinum included a combo map which was a good idea as it made me try to get them all, still got 1 to do but they all were quite ok to do albeit not something you will pull off in an instant. 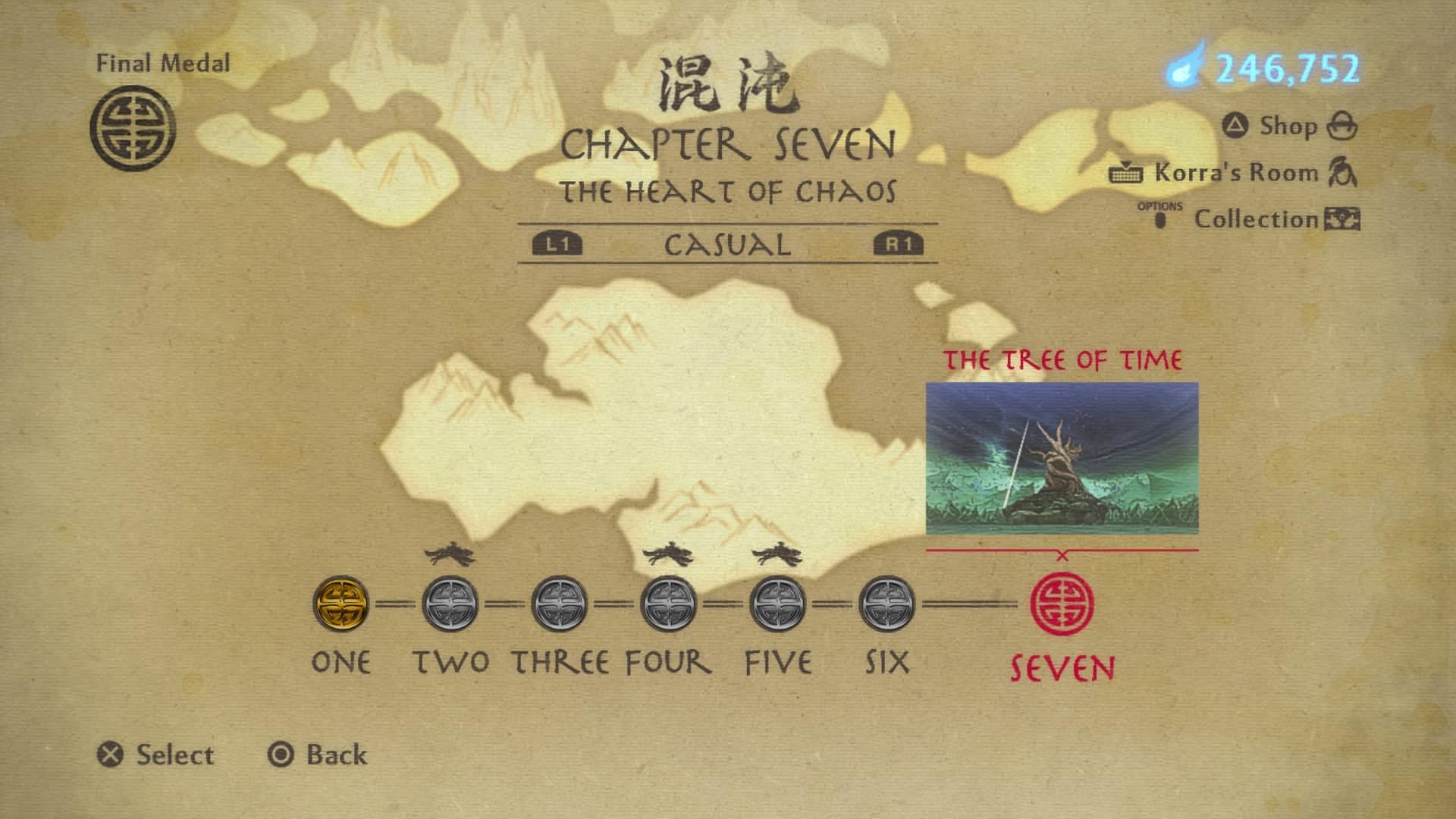 Picture from my first playthrough which i did on casual, there are 8 levels (only) and they are quite small too and completing the game is fully possible in 3 hours (on casual anyway).

3 of the levels include that ride the animal thing stage.

And here you can see screenshots of something of an extra called Pro-Bending tour, it is a mini game thing and i guess this is an event that plays a huge part in the series. It plays ok enough but i keep getting sore fingers (and hands) after the endless button mashing, i guess there is a way to play this properly but taking it slowly did not fit my patience or style for sure.

You will have to play this arena thing in the story mode too but luckily that one game ain’t all that hard really so it was passable without my hands aching too much.

The Legend Of Korra is definitely worth £7.99, it is quite polished and fun and has an ok length too, you can get far worse games than this for its asking price. It is quite obvious that Platinum had a tight budget and that they had very little room for turning it into something AAA.

I had fun while playing it and it is not often that i bother with a second playthrough in games like this one but do not get me wrong here, the game has lots of flaws and is far from a must buy.   Instant buy, if you’re into Anime or cell, shaded gfx.

TLOK is as far as i know a download exclusive.

4 thoughts on “A Look At: The Legend Of Korra”