The guys at Abyss Cooperation launched four “tiny labeled” games in a year, all huge titles back in the 80s and now recreated for the Amiga, I reviewed TinyBobble a while back which is an arcade-perfect version of the Taito Classic Bubble Bobble. I never got around to reviewing TinyInvaders and TinyGalaga for various reasons but one of them was I somewhat waited too long before doing it and then forgot all about them due to the high amount of solid games coming out on the Amiga at the time.

I must admit that I never expected the fourth game to be an Arcade-perfect version of Nemesis/Gradius really, but yes Tinyus is exactly that. 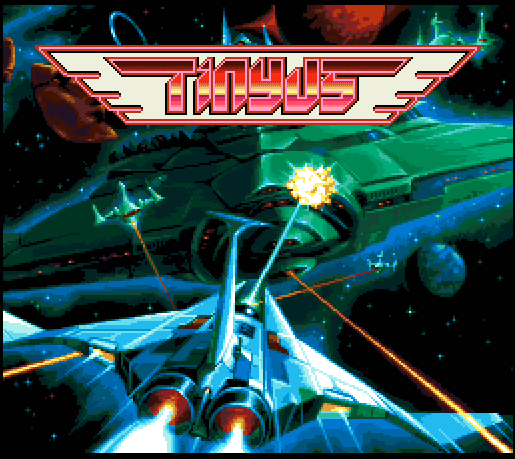 WTF HAS NEMESIS TO DO WITH SEX GAMES?

First of all, let us take a trip back to 1986 and my first encounter with Nemesis:

Imagine that, Nemesis is back in my life after all those years since I played it more or less the whole summer of 86 together with my brother and my nephews in Stavanger while having one of the most memorable summer vacations ever, it was that summer vacation my youngest nephew got to see Sex Games for the first time and his mom came into the room due to the amount of crazy laughter and racket going on, he had the Comp Pro 500 stick between his legs and waggled that stick like crazy and it all looked like he was doing something completely different, 1 minute later what was the funniest moment ever turned into one of the most awkward moments in our whole life.

Needless to say, we stuck to non “Rated R” stuff from that time until…like forever…

Updated: Want to try SEX GAMES? No Problem, it is actually playable in your browser, direct link here.

Yep, We Were Damaged For Life And For The Totally Wrong Reasons :p 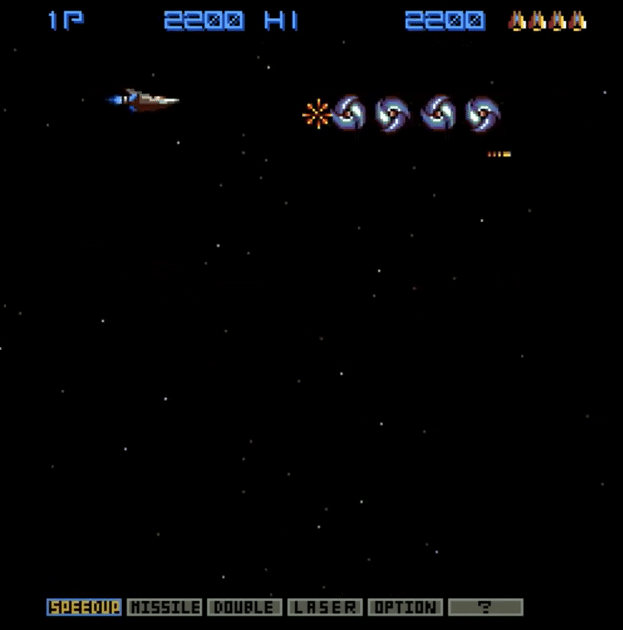 We went to the shop and decided to buy a new game and Nemesis looked fantastically good (the box and screenshots) so we asked to try the game in the shop (damn I miss those days when we got to test games before buying), and it didn’t take long before we decided to buy it, the music, and the graphics were like absolutely REAL LIFE like and little did we know then that the playability was even better.

We must have played the game the whole summer of 86 and all four of us had two goals, to beat it individually and to beat everyone else’s score, the race to completion was hard for some and not so hard for others but one thing was sure, we all got extremely good at Side Scroller Shoot’Em Ups that summer

To this day I still prefer the Commodore 64 version over the Arcade version and I know many would never agree with me on that but this is most likely down to this very summer and how it all turned out because of this game.

Do You Remember When We Could Ask The Shopkeeper To Try A Game Before Buying? 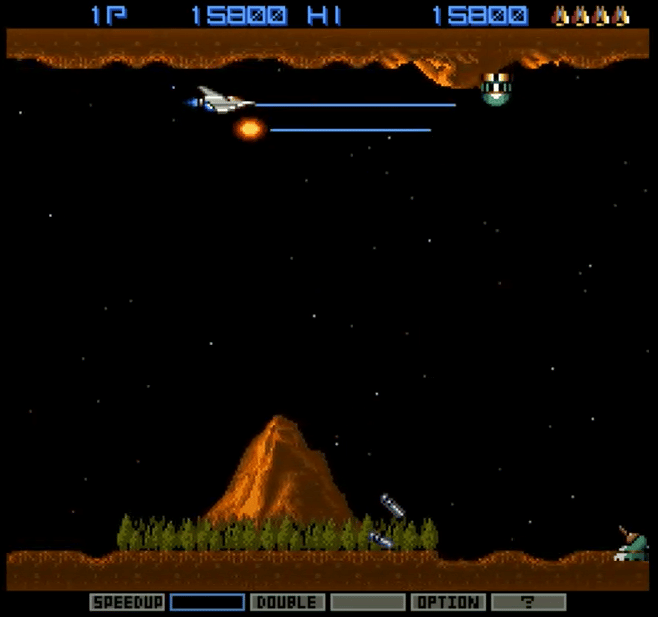 What About The Tinyus Review Then?

Tinyus is exactly the game I wanted on the Amiga back when I had played the C64 version but (as you most probably know) there weren’t all that many games of that genre on the Amiga at the time and those that were there sucked balls.

From the moment I loaded up the game till I switched It off hours later left me with a feeling that this version would have blown me out of the water back in the 80s, it is as near perfect as it could be and while it runs a bit slow on the Amiga 500 it is still not a problem gameplay-wise and as yes, the arcade also got slowdowns which mean most won’t even notice it.  That said, the framerate on the Amiga 1200 is like a dream and most certainly the best version I have seen of Nemesis ever. 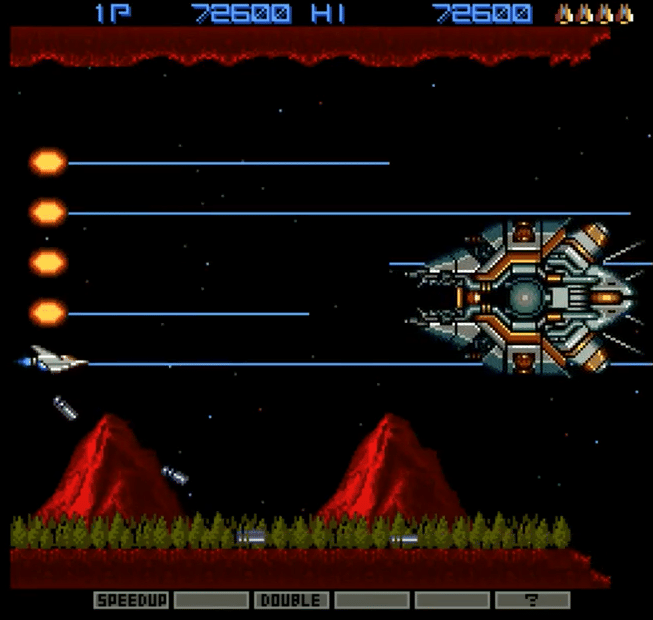 The boss fights are pixel-perfect and I just can’t get over how good this port is, it is running in 50 frames per second, it has sound fx and music at the same time and the number of colors and objects on the screen raises a few questions why we had so many shitty sidescroller shooters in the 80s on the Amiga, it might be a bit unfair to many Amiga 500 games but in my opinion, the first good sidescroller was Silkworm and after that, we got a few other really good ones like Agony, Project X and finally Disposable Hero. 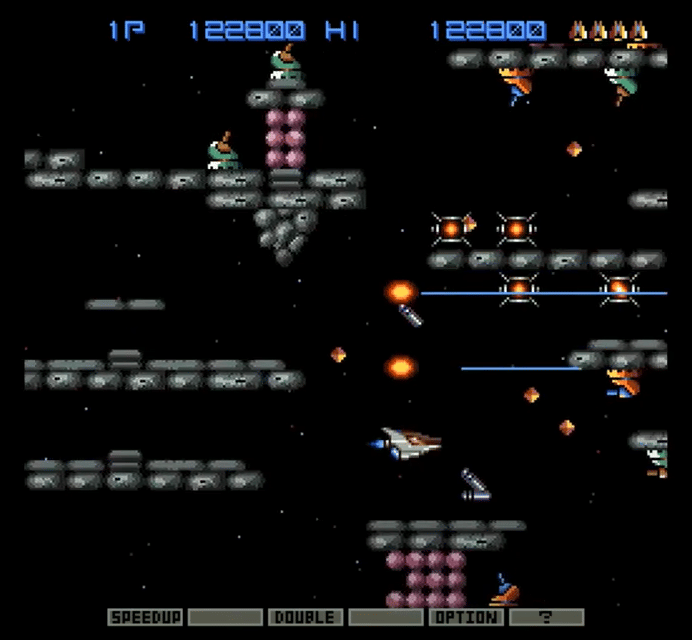 Is This Port 30 Years Too Late?

Tinyus By Abyss is yet another fantastic example of what the Amiga is capable of and how most developers either had no idea or were not capable enough to do a port thanks to the horrible developer tools and even more so how Konami, Capcom, Taito, and the likes never handed out assets to aid the projects and therefore we got horrible ports of many games on the Amiga, another thing was also that Atari ST thing that they continuously decided to have as the lead platform even though they knew it made their Amiga ports rather shitty compared to  (WTF)…

The reason for not giving the game a 10/10 is that I never liked the Arcade music sound at all and since the Amiga version uses that, well, let’s just say that I wish they had used the Commodore 64 music instead.

The last few years have brought fantastic ports of Super Sprint, Rygar,  Bubble Bobble, Amidar, Pacman, MsPacman, Metal Gear, Knightmare, and now Nemesis, and there are loads more to come like Double Dragon, GunSmoke, Robocop, Wonderboy, Jackal, Green Beret, and so on.  The Amiga future looks fantastically bright again, what a time to be an Amigan, praise it, love it, and support it and it will last forever.

Try Tinyus Yourself, It Is FREE And Available At This Link Right Here, Right Now, Enjoy!

I have attached a video by Saberman playing Tinyus below, this is the best channel for new Amiga games on YouTube and in my opinion, you should subscribe to his channel right away.