I first played Bubble Bobble on the Commodore 64 and it didn’t take long before both myself and my brother was hooked so much that it eventually led to us completing the game, this was back in 1987. That very port is still in my top 10 games on the machine and well little did we know back then that that port was maybe one of the best out there and that the upcoming Amiga port was a downgrade in many ways to the sublime C64 version.

A few years went by and we finally got the Amiga version and it didn’t take long before we loved that one to bits too and yes we were gobsmacked by the fantastic arcade perfect graphics, the sound and how it played etc, it was good but…

Little did we know back then that it wasn’t as arcade-perfect as it could have been, the Amiga could easily do a 100% arcade-perfect version it seems, well that is what this new version by legends from the Demoscene group called Abyss has shown this year with Tiny Bobble which is a near arcade-perfect version of Bubble Bobble for your OCS Amiga (and above), more about that after the unboxing. 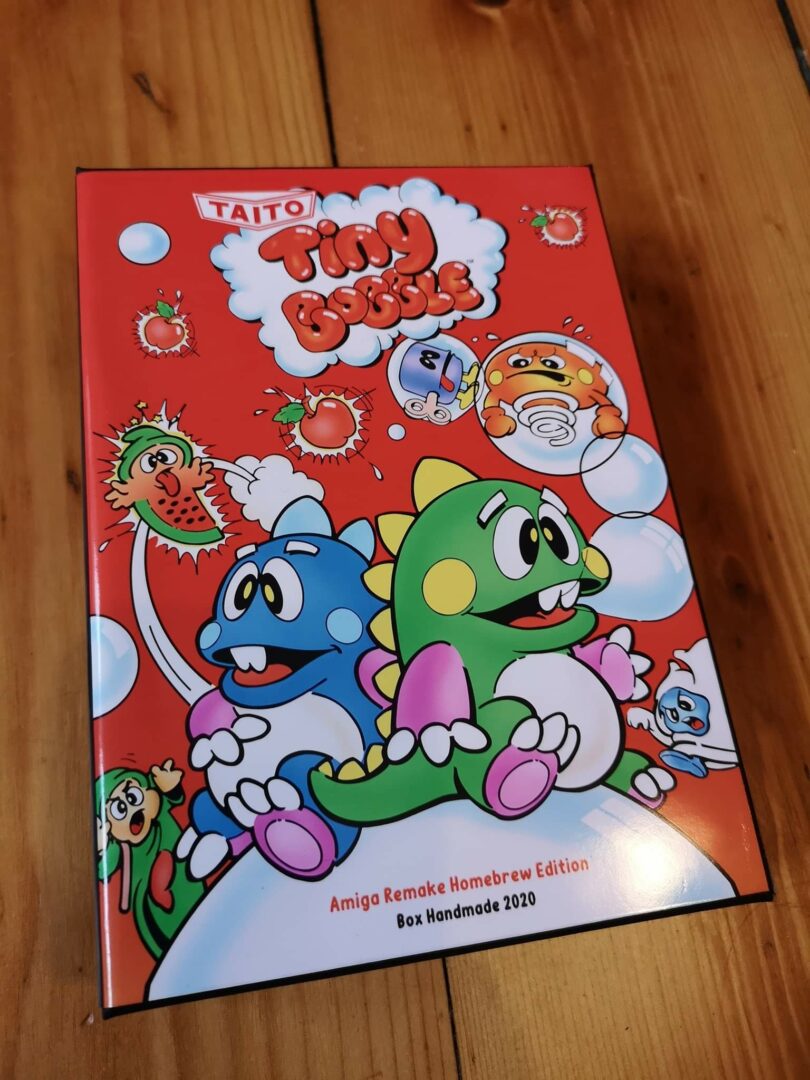 Tiny Bobble is so good that it didn’t take long before people asked for a box and our friends at Retrophase came to the rescue with yet another unofficial box (or bootleg if you may) which is not a cash cow product but more of a fan service thing and yes they are only made on-demand to collectors or whatever who want a box for their free download game etc, that said they have done an excellent job of doing complete editions of games too and this is one of them. 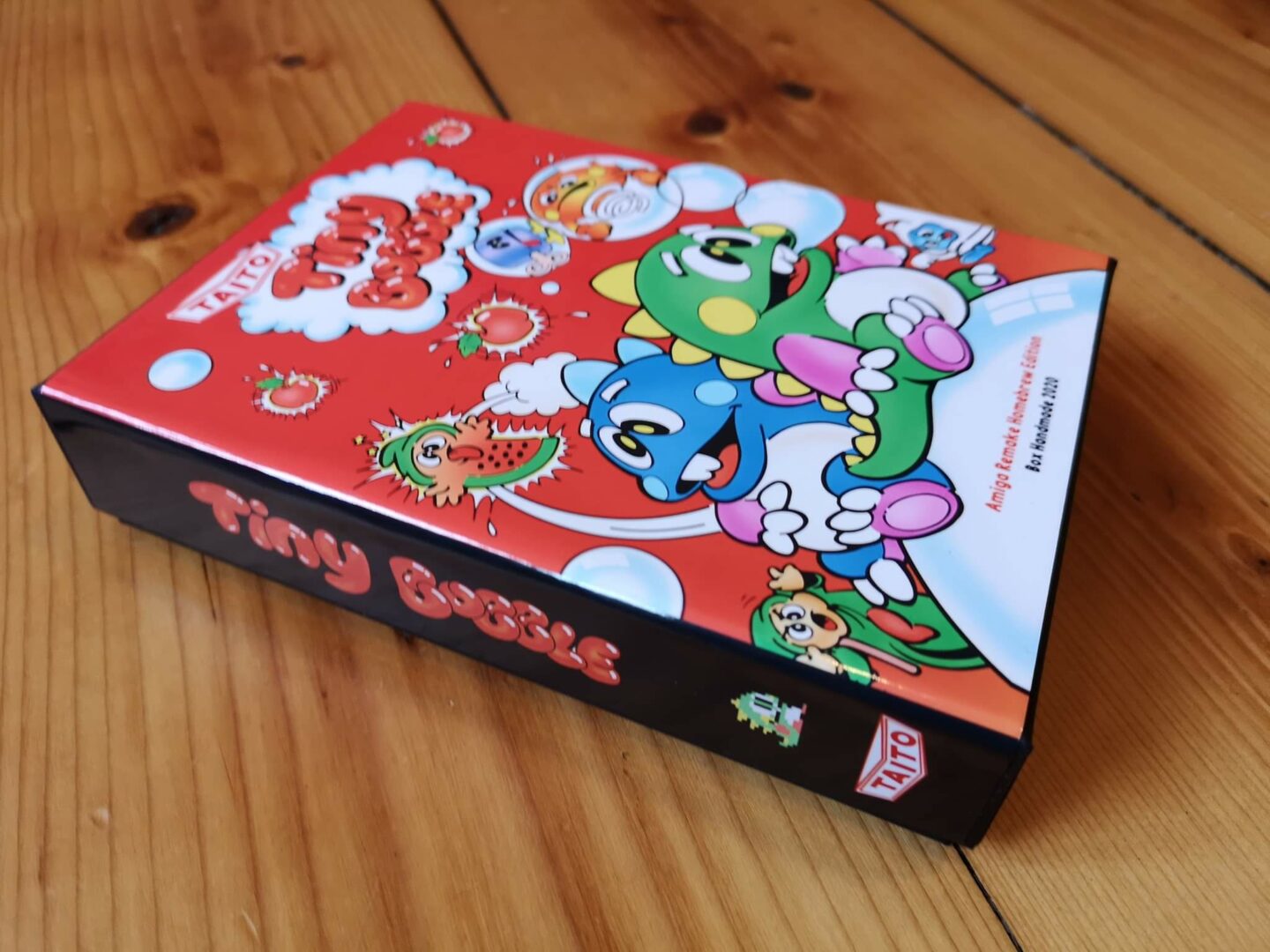 The box is not the traditional cardboard box stuff as they use a “sticker slapped on the box” type of approach and they make sure that it is impossible to miss that this is a fan service box with various design choices as well as text that explicitly say it is a reproduction or whatever so those collector zealots out there (like me) won’t go apeshit. 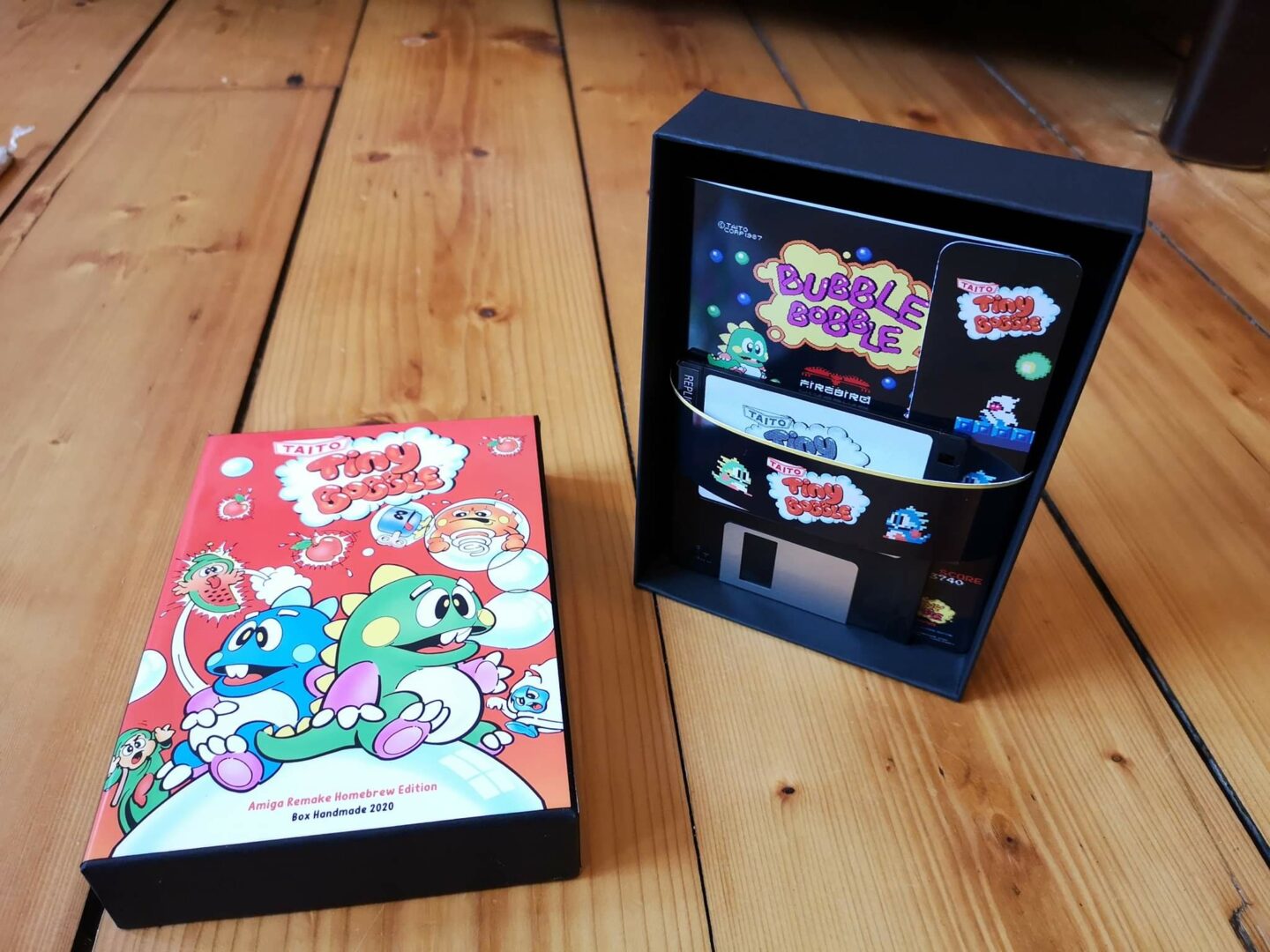 The presentation of the box is great, it looks like the real deal until you realize that it actually says Tiny Bobble and not Bubble Bobble and yes when you pop the lid it actually gets even better,  a floppy disk with the game is included as well as other stuff and everything is perfectly laid out and secured in the box. 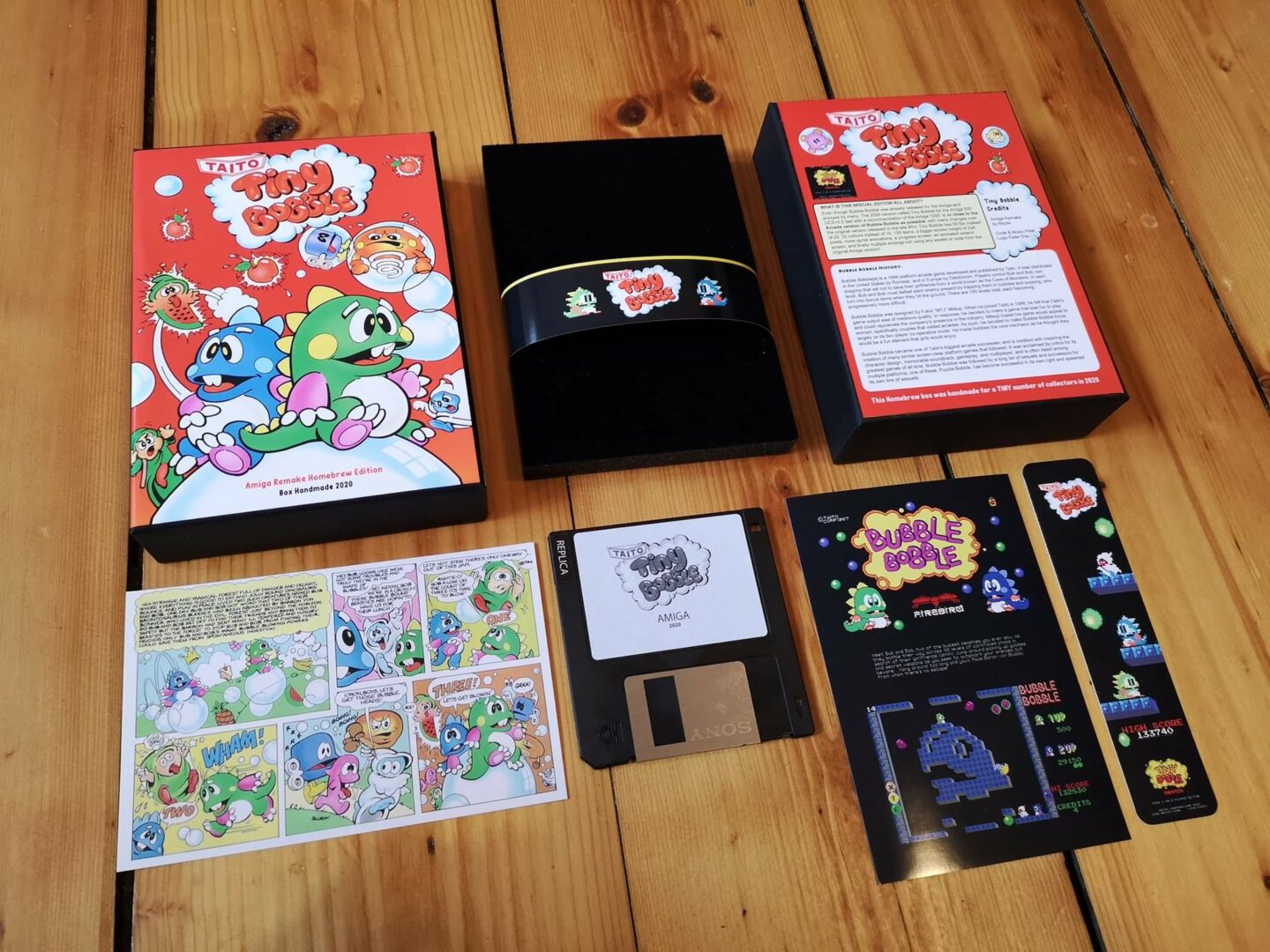 The original comic is reproduced on a small glossy card (instead of the newspaper styled one from the original release of Bubble Bobble), the box insert is a nice idea along with other tidbits that makes the box look and feel like a real release from the yesteryear. 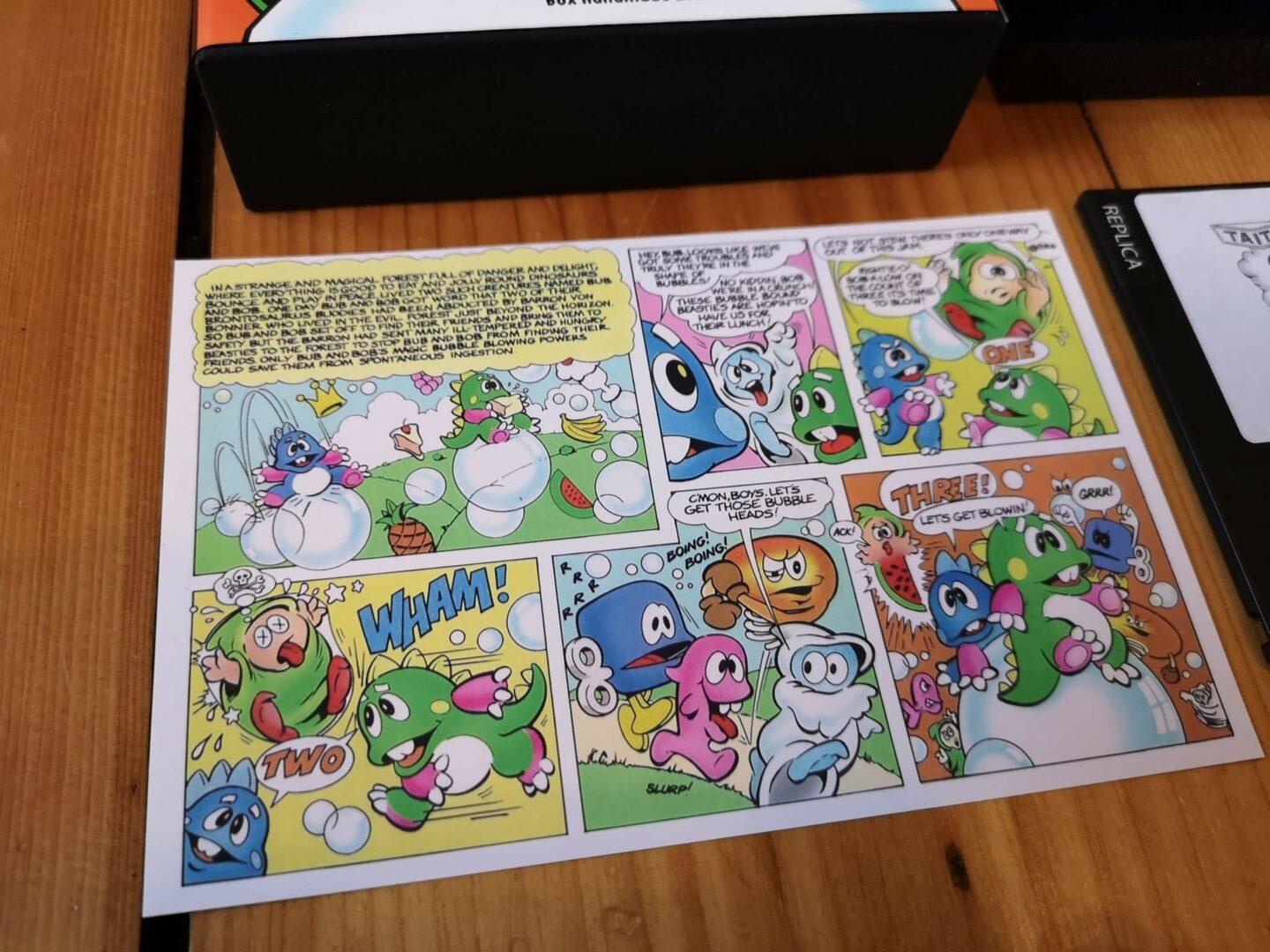 A closer look at the comic if not a tad hard to read.

A really nice box for what it is worth, it is fanservice and for a few select people only and while you might find one on eBay these things are normally only requested from the guy(s) making them on demand.

Ok so that was the box, what about the game then?

Well, first of all, it is safe to say that this version is the best port/*conversion out there (of the ones that I have played anyway) and that it is indeed true to its name “Tiny Bobble” as the file size is only 178kb and yes it is single-file too which means there ain’t any loading either to talk about. 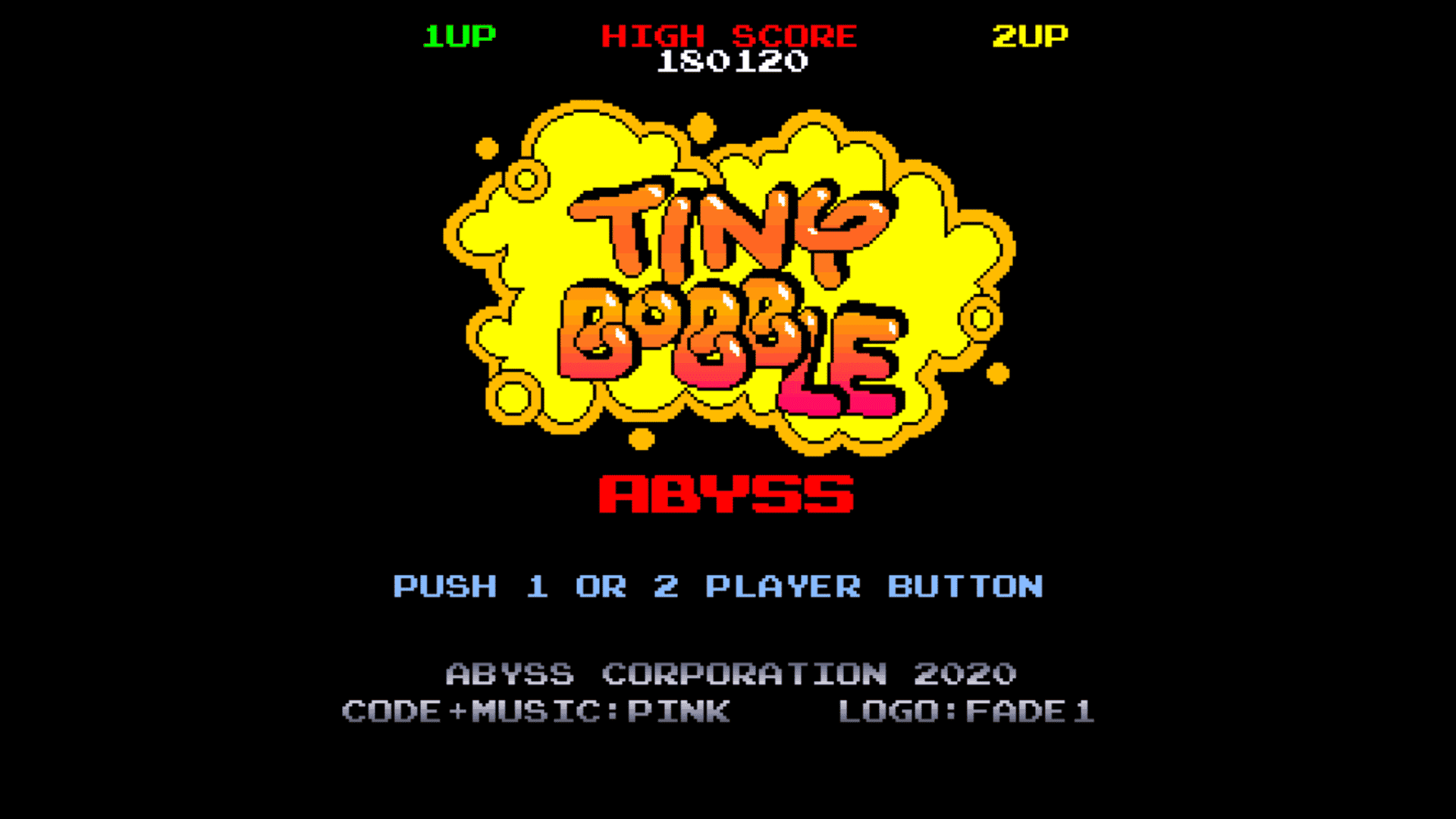 At first glance, everything looks and sounds like the original game and it can easily be mistaken for the original 1988 version by Software Creations.

Interestingly enough this new version use no code nor assets from the original Amiga game and that alone is more than enough reason to be really impressed with this version.

As soon as you press the fire button is when you realize that this is a greatly improved game as the frame rate is superfluid now (50 fps instead of 25) as well as it looks better too thanks to 32 colours on-screen (instead of the original 16) and yes it just moves so good that if you fire up the old game after this one then you won’t bother to play for very long for sure.

Tiny Bobble got a lot of other things that were omitted in the original game too and while most never probably noticed that back in the day they will certainly notice it now if one compares the two versions against each other, bonus levels, pickups, amount of stuff going on at the same time and so on.

I always loved the Arcade, C64 and Amiga music and while I did prefer the C64 version I still never had any issues with the other versions really and same goes for the new music in this version which is actually done in PreTracker which is a tool for PC to make Amiga music and yes this is also an Abyss product.

Tiny Bobble is fanservice at its best and quite possibly one of the best ports ever done on Amiga in terms of how true it is to the original anyway, the game is a free download and one that every single Amiga owner (or BB fan) should have in their collection for sure. The box is not a necessity but boy is it nice to have such a fine game in a handmade box made out of true love to the game (and franchise).

Do you want to give the game a try?

Want the game box? I fear the only option would be eBay for now (maybe the creator can give more info in the comments section?)