2021 has been a superb period as far as Amiga games release. Not only did new games appear on the horizon, but the time was ripe also for retrieving great titles of the past. In particular, thanks to a very dedicated fan (and user), we were able to put our hands on an unpolished gem which story is surely well worth being told. The protagonist of this endeavor is also a writer for AmigaFuture Magazine and we are more than pleased to host him today on these pages: my fellow Amigans, let me introduce Mr. Martin Schaf.

I have been a writer for Amiga Future for the last few years. Also, I am not only a collector owning a few thousand Amiga Originals, but I am also supporting the Shareware Games if I find good ones. So, thanks to a friend of mine who was the owner of one of Germany’s biggest PD-Publisher, I put my hands on a Full Shareware Versions. Legend of Falconia was one of the titles I found. 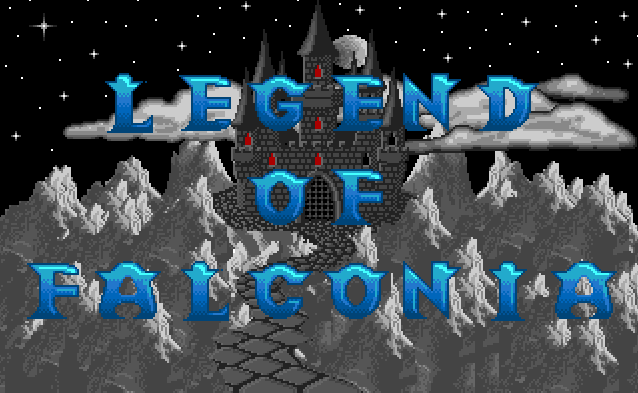 Frank Röchter, the programmer, coded this game when he was only 17 years old. Despite his young age he managed to realize a really good German adventure with 4 Disks which played a little bit like the old Lucas Arts Games. Not so professional, of course, but very good. There was also a 2 sided review in a big german Amiga Magazine in 1995 with very good critics, but since they published it in their Public Domain Corner, nearly no one (about 10 people) bought the game. The English version was never released because NO ONE wanted it at the time. The game was nearly going into oblivion, the only traces being a Demo Video on Youtube and an entry in MobyGames related to the Dos Version.

At a certain point, Andreas [Amiga Future’s editor] asked me if I knew some old games from which he could possibly get the rights for the magazine so, with this game in my mind, I tried to find Frank over the internet to ask him what he would think about a release for AF. He was of course very surprised to hear about a request for his game 25 years after. Sadly, he did not have the Disks any longer but he still had some files on his Harddrive. He gave me the files and I was able to translate the rest from the unreleased English Version. That’s how I finally managed to have the original German Disk version and a harddrive version able to play both in German and English. 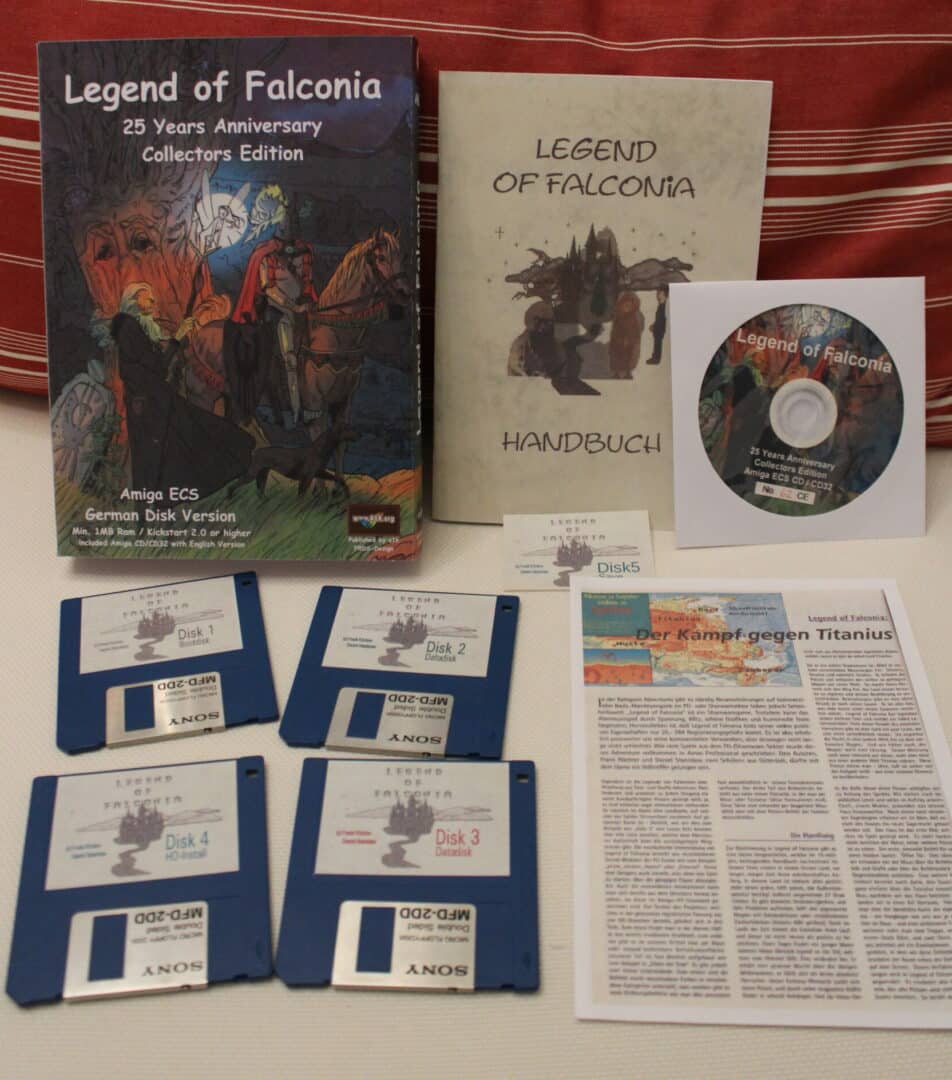 The initial plans about the making of a boxed edition directly connected to AF were too expensive and complicated to achieve, but this game was too good and too rare just to give it up as a free download version: this game deserved more! So I planned the 25 Years Collectors Edition by myself and made it alone, but I wanted to turn it into a nonprofit project. I decided to make it an a1k Fan-Project from which the a1k website gets 3€ per Game. The other 5€ were originally planned as a reward to Frank, but he didn’t want the money as well since he was just happy with the good support of his old game. We then decided to give the money to charity. I made a box with the 4 Disks of the German version using the old design of Frank’s original Disklabels. I made copies from the Handbook and wrote some additions because the Hard drive version in English and German never existed before. I made a printed CD for all versions (ADFs and Harddrive version) and I also got the game capable of directly booting from a CD32. So this was also a never-released version. As Gimmicks, I gave away a copy of the original review from 11/95 and an additional Jewelcase Cover for the CD with an additional sticker for a 5th save disk. I made a box with a really good-looking cover and made about 80 Copies of the Boxed Edition. Outside Germany, just my Italian friend Livio and Tony got a box. [Well, I have one too, now 🙂 ] 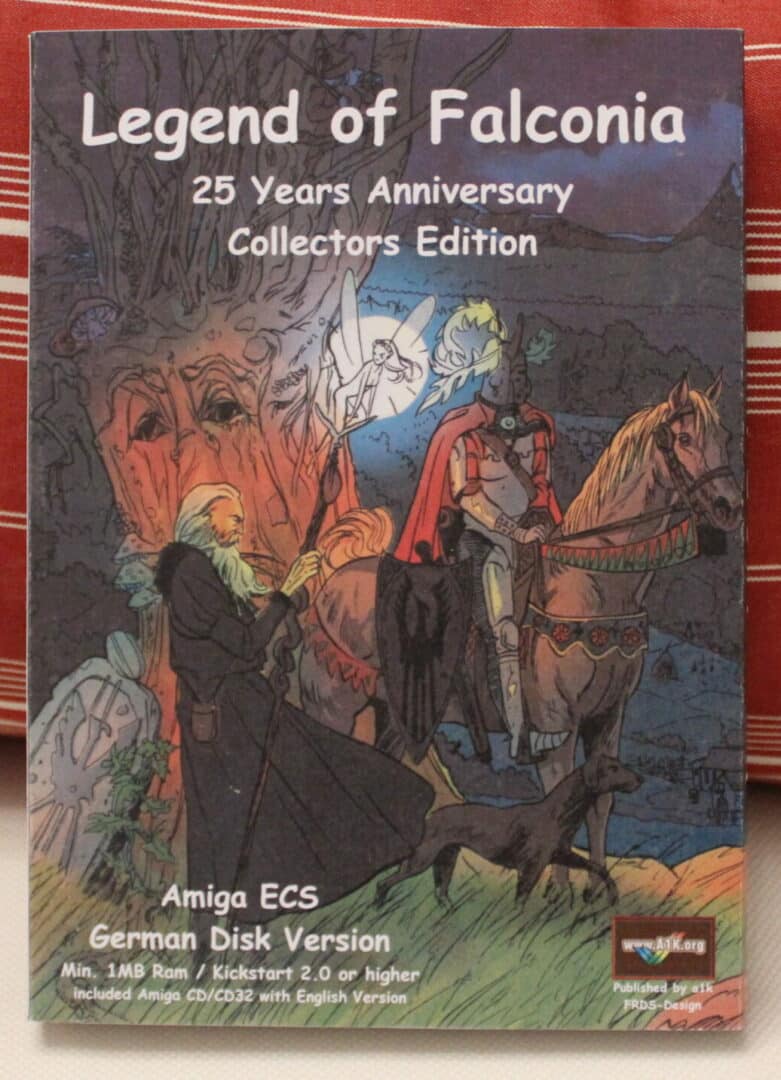 So many people here in the a1k are happy to have this boxed Game now because they never heard of or played this game before. An a1k user just made a Let’s Play from this Game in German via Youtube.

I am not a Designer in computer graphics, but I had to find a cover!! It is at this point worth saying that I am not only collecting Amiga Games, I also have nearly 300 Board Games. Since Falconia has a story with dragons, magic etc, I chose a cover of an old Board Game from 1990. It was called Kalahen and it was published by the Belgian publisher “Flying Turtle Games“.

Because of copyrights, I had to ask if I could use the cover for my project and during my researches I found out that in 1992 the big “Ravensburger” Publisher bought some rights from Flying Turtles. So I asked them if they have the rights for Falconia and if they could allow the usage. After months and various phone calls, I got the answer that they cannot give me any authorization to proceed because they didn´t have the rights for Kalahen. In the meantime, though, also I found out that this cover was used on a Music LP from the Belgian rock band “Dragon” from 1976 and this LP was re-released by the Italian record Publisher “Golden Pavillon” in 2011. Therefore I thought they must have the rights and emailed them.

I just got a straight nice answer: they would like to help my project but they also just had a license from the former manager of the band which was now in France. So I emailed the manager in France and asked. He gave me the answer that he designed the record in the 70s with the former songwriter and guitarist of the band. And he had created this cover. He lives in Canada now. The strange thing was that the name of the cover designer was Henri Jean Vanaise. And this man was the same which was the creator of my Board Game “Kalahen”. So this man was a real multi-talent: songwriter, guitarist, painter, and Board Game creator. He also created the Board Game “Shark” for which he was nominated for the Game of the Year in 1987 in Germany. Finally, I wrote to Mr. Vanaise: he was very kind and supported me to give the rights for the cover for free. Great isn´t it?

So, my fellow Amigans, this is how a 25-year-old unpolished gem was finally brought back to light in order to shine on our beloved Amiga machines. I ran into Martin mainly by chance, but I am sure glad it happened since this is, once more, the living proof that you can’t kill the Amiga: we are here to stay, but you must do your part, as Martin did in such a passionate way. Please support indie devs and help us to keep the flame alive!

Finally, I would personally like to thank Martin for his work, a1k website and users for making this possible and AmigaFuture for letting us write about it as well.