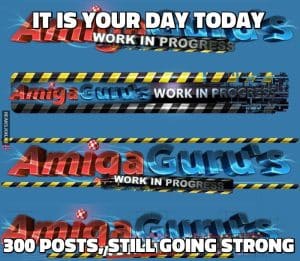 Yup, this very blog has now passed the magic number 300 and that’s quite a milestone for me and the others around the world who read the blog daily, I would never have reached 300 without you guys and the other writers who’ve helped me have certainly helped a lot on the motivation to keep the blog active, thanks a lot of guys!.

2,5 years now and the visitor numbers are still going up and same with the regulars and I wish there would be a better account system on the blog as well as the option to do it all from their side but the blog has its limitations and I am trying hard to get help to get the new blog interface up and running. There’s been a few new features since 200 now, the youtube script and the picture scripts have been modified and upgraded a lot and there’s a lot more to come soon (I hope) , date stamps are on its way with a calendar front end and there’s also gonna be the option to get emails every time there’s been an update/new blog/comment and so on.

I have the recording stuff ready but my streaming account and youtube account have not been updated as I have a really hard time getting used to using Windows tools to edit the movies and so on so, I am stuck with FFmpeg on the Amiga and a lot of software which crash all the bloody time so you can safely say that motivation ain’t really at top yet…. that said, I will get it running but I refuse to use a PC to do so so bear with me on this.

Other updates are that I have still not got myself a Playstation 4 and while I do want one just to play Infamous Second Son I still think that I should wait until after summer time as by then Drive Club and The Crew might get released too.

My backlog of games have reduced by over 60% since January and by 60% I mean over 50 games, probably more as counting PSN games can be a tough nut hehe.
Returning to old games have been both fun and horrible boring but some games have been absolutely amazing so it’s been worth it (and then some).

The most read/viewed post in 2014 has been the Ride To Hell review which was part of the most crappy games series I was running around new years but sadly the count has been nothing near the stripping promotion for Gangs Of London which is still going strong!.

Ok, thanks for your time and I hope to see and read you again for at least the next 100 posts.