I’m a “product” of the seventies, and as such, I grew up with the first home computers that reached Europe and all the relevant TV-shows in mind. At that time we were only “imagining” about technology power since internet (and even BBS) were still fairly distant from us, yet Sci-Fi were “invading” our TV-sets every night.
Computers and science fiction have always played a major role in my life so it came naturally that, in time, cyberpunk literature became one of my favorite genres.

This article pays a tribute to that. This is for William Gibson (who, together with Bruce Sterling, invented cyberpunk); for Jay Miner (who invented Amiga); for the Amiga computer itself that still lives in our hearts (and on my desktop as well :-)) and for Tony, who always keeps the faith alive!

I am so “celebrating” my tenth article on this blog by reviewing the Amiga version of “Neuromancer“, published by Interplay in 1989 and inspired by the first William Gibson’s novel (1984). 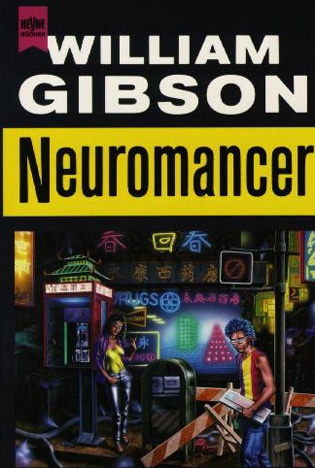 To be honest, at the time this game came out I didn’t have an Amiga (I bought my first one in 1992), so I actually played it a few years ago when I got the AmigaForever emulator by Cloanto (www.amigaforever.com). The pictures inside the article have been taken during the last few days after I installed AF2013.

Gibson invented “cyberpunk” after having coined the word “cyberspace” in his short story “Burning Chrome” (1982). The term refers to a dystopian future in which a powerful and omnipresent technology (high tech) as opposed to a decaying society (low life) in which most people are forced to live in shanty towns, often selling parts of their bodies to have the money to afford a new piece of equipment. (Who’s the next of you willing to give an eye for the latest iPhone model?)

Interplay’s game took inspiration by the novel, using pretty much all the names of people and industries depicted in the book but it did not follow the original storyline (nor the artists were particularly inspired). The result, unfortunately, was a game that didn’t use the superior graphic and sound systems of the Amiga computers and it was not that fun to play.
Despite that, I think it is still a valuable product for historical reasons, depicting how cyberspace was conceived at that time. The “grid navigation concept” used during cyberspace battles was later exploited in many other productions like “Johnny Mnemonic” (another Gibson’s short novel and well known movie), “Ghost in the Shell” (the Mamoru Oshii’s anime masterpiece), “Max Headroom” (an American TV show named after the UK program) and even “Jurassic Park” (the part in which the survivors are trying to reboot the entire computer system after the hurricane hit the island).

You start the game in Chiba City, Japan, broke and unable to jack-in inside the cyberspace since you pawn you “deck” and lost all your “warez“. The first half of the game needs, therefore, to be spent in search of those “basic” things and the story unfolds in the “low city” – a bunch of ugly small streets filled with pawn shops, illegal computer resellers, lousy hotels and “massage parlors”. 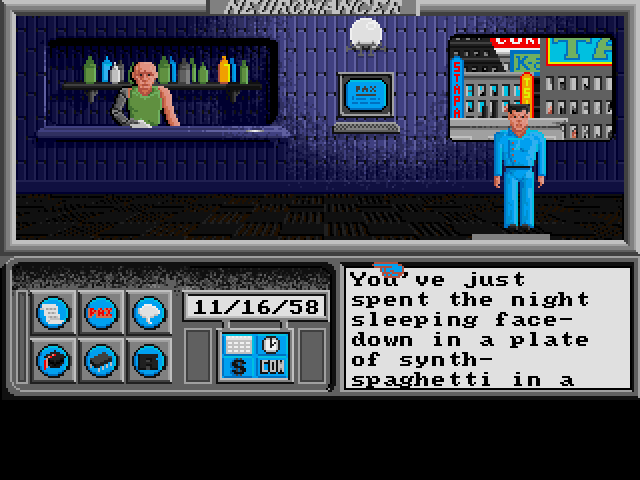 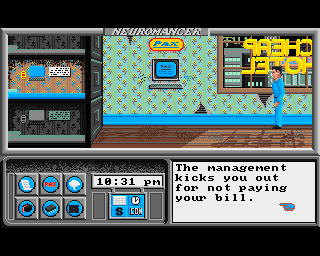 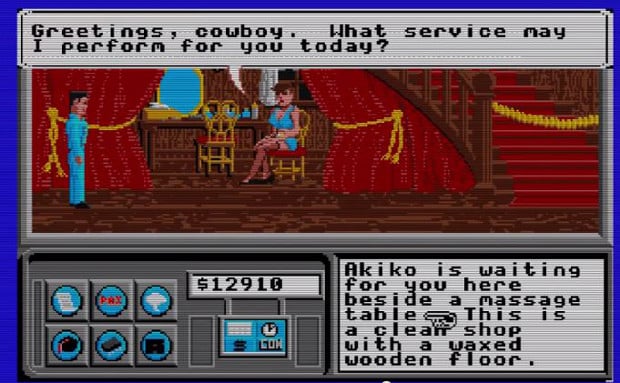 The game is basically a point-and-click adventure, where you have a very limited interaction ability necessary to connect to a computer system from which you can manage (or hack) your bank account, read the daily news or reach a few pirate BBSs to download “useful” software.
Before proceeding, you will also have to get (or acquire) “micro soft chips” that, implanted in your brain, will give you all the special abilities you need to get into the cyberspace and battle the AI’s, after having destroyed their defenses by “ICE breaking” their relevant databases. 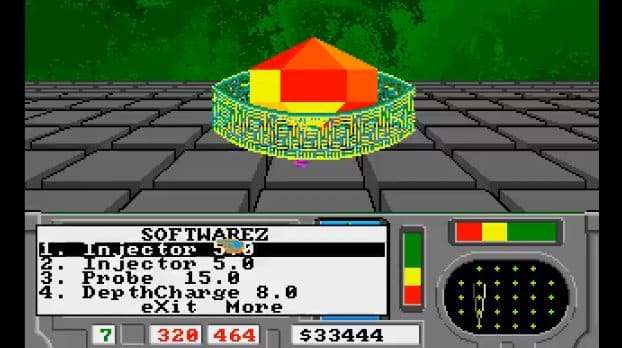 As a matter of fact, when you finally get able to enter cyberspace “in full” (in the beginning you are just able to connect to a few servers in a very “ordinary” way), the game features a very unpleasant increase in difficulty which can often end up in your character being “flattened-out”.
Basically, the AI kills you and you’ll end up in a “Body shop”, where some doctor will kickstart back your brain after having pocketed all the money you are carrying. Going around with only a few credits is not a solution since you need money to connect (weren’t hackers supposed to be able to navigate WITHOUT having to pay a telecom fee?). 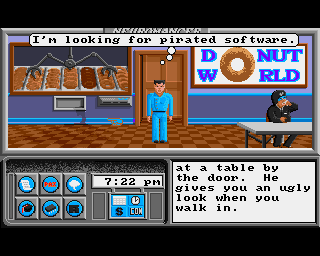 From time to time, talking to NPCs will depict a smile on your face, but Interplay fails in mimicking Infocom’s sarcasm and “Neuromancer” never feels like “Zork” or other classic adventures.

Despite its many flaws, I enjoyed playing this game again (you can find the ADF file by searching on www.lemonamiga.com) because it brings back so many memories. If you are a cyberpunk fan, give it a try. All the others can pass this one.
For those of you interested in my crossovers, I suggest reading the book and watching “Nirvana”, an Italian made movie that captures the original cyberpunk spirit MUCH better than the “Matrix” trilogy. It stars French actors, Christofer Lambert and Emanuelle Seigner, together with Italian actors that you may not know. To anime fans, I also suggest Masamune Shirow’s “Ghost in the Shell” (both the movies and the TV series “Stand Alone Complex”).

Follow Us... Inspire Us To Get Better... Keep The Flame Alive
Tags: cyberpunk