Finally, one of the best platform games ever made got a remake, we’ve seen Sonic, Mario and many others redone but as an Amiga guy, i always preferred Superfrog, Brian The Lion, Addams Family. Mr. Nutz and Ruff’n Tumble over the hedgehog and plumbers.
Superfrog was actually a game i hated at first and it took some months for me to like, i mean… i just shelved it and luckily i gave it a second chance.

This is one of the first levels in the Amiga version but on the PlayStation versions this level (nor anyone else) is actually not part of the main game as the developers decided that the game needed new levels, same graphics but new levels and at the same time easier levels because today’s gamers are not able to handle the original’s difficulty level.

Luckily they added the Amiga levels as a bonus that you can unlock via this slot machine, it will require quite a bit of luck to win all levels but you will get them in time.
When you play the Amiga levels then you unlock graphics\brushes for the level editor included in the game (no idea why there is a level editor as… whats the point?)…

Here you can see the labels Original which is the Amiga version levels and the ones that say Level 1 etc is the “new levels”.
I am not sure what to say really, it looks good but the whole new menu and frog design look make the game feel wrong, more about that later on.

Always loved the look of the levels in the original game and the charm is in this new version too even though i still think they should have stayed “retro” as the zoom in\out gameplay ruins it at times, that said, it also fixes the game with it.
The screen zoom in and out all the time when you move fast, cool feature and made it easier but some of the challenges is lost because of it but most of all it made some of the levels lose its feel.

Here’s a thing they added to generate replayability of a game that already has tons of replayability, you get stars based on how many lives you lose and score and coins you pick up as well as finding secret area’s.
Finding all of these things is a nightmare but it’s fun to explore the levels as the game has a time limit on all the levels so you have to be fast and structured and thanks to the actual game and design this is not impossible but yet challenging.

Egyptian theme, absolutely fantastic music in the new version, the best new song in this game.

What is a platform game without a slippery ice level? still hard but much easier compared to the original thanks to removing spikes and various traps all over the place.

This is the part where the Amiga game rules, this very level…. guess what?… it’s gone in this new game (and also not included in the original levels either)… why they removed it is beyond me but maybe they forgot about it?..maybe they couldn’t get a coder to do it? , maybe it required a special license?
Anyway. Project-F, a clone of Project-X is not in this new game.

Finally, a level which actually made me lose a life or 2… it’s the last level and it was the first time i died, shame really as the game would have lasted me more than an evening if it had been harder.

EDIT: Due to i lost all pictures i had to steal some, but finding the ending pictures for the end video was a living hell… so i decided to use the Amiga version instead… which looks amazing anyways 😀

So, this is the end of the game, it took me a few hours to complete but the ride was awesome but i found it to be extremely easy and nothing like the original which was not an easy game really.
The game deserved a good remake\port and just like the Alien Breed Remake Team17 did earlier this year they did just what they should have done, they crafted a damn good game and one that will not be forgotten by its fans.
The scrolling is as smooth as its original, the music is great although i do prefer the original sound and music over this remake nonetheless it’s still damn good.
Graphics has lost some of its special feels and look but still great even though i miss the old frog design and funnily enough backgrounds throughout the game has the original frog design but not the frog itself.

I have only tested the Vita version and i did complete the game and met no bugs or slowdowns or any game breaking things and while i have not tried the PS3 version yet i still think that version will still be ok too and i will grab that one soon. 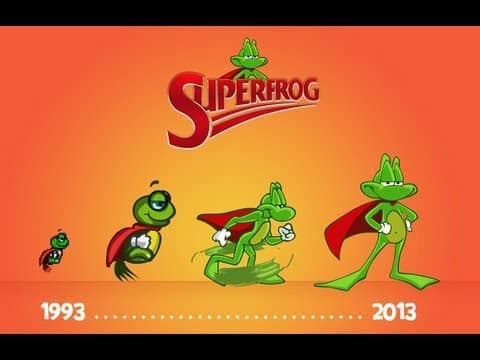 Sidescrollers is perfect on the VITA and i hope to see Giana Sisters on it soon.

EDIT: 2017, and as we know today, a new Giana Sisters came out a bit later although not on the VITA, only the PS3.  I have edited the article quite a bit since i lost all screenshots and had no plan to play it again anytime soon… my backlog is insane.

5 thoughts on “I Give A Flying Frog… – Superfrog HD”