The head of Insomniac Games have really put an effort into the naming of this game, sadly it is not just the name that is dull.

Insomniac Games used to be the number 1 in 2nd party game development for the Sony PlayStation, they used to get the developer stuff way before many others and they also had opportunities to help and develop the software further but somehow they lost the ball as they haven’t been getting enough attention from Sony’s market division so games like Resistance 3 got in the shadow of games like Killzone 3, it was almost like Sony stopped bothering with the guys behind Spyro The Dragon and Ratchet & Clank. 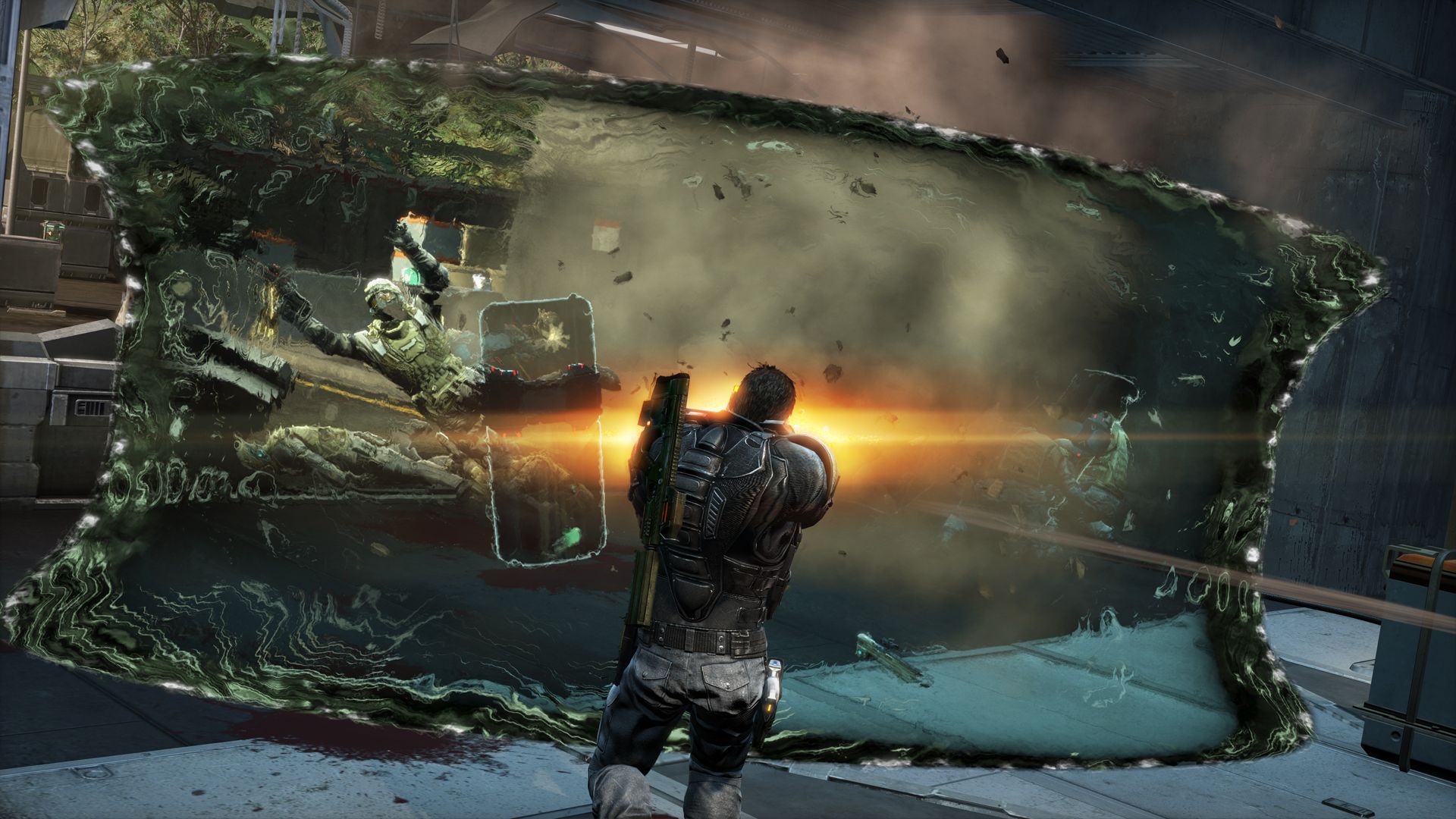 Up till now in the PS3 cycle, Insomniac Games have a record in releasing the most games and they also have the record for milking a franchise the most ever in the history of the PlayStation brand, yes the Ratchet & Clank franchise and sadly it shows as the games have been a rollercoaster of highs and lows….

Resistance 1,2 and 3 are great games and they show great potential but every game seem to replace new stuff and replacing it with stuff that worked better in the past game, a few things like the 7 player CO-OP from the 2nd game, the health packs from the first game and the graphical design of the 2 first games vs the 3rd game…. 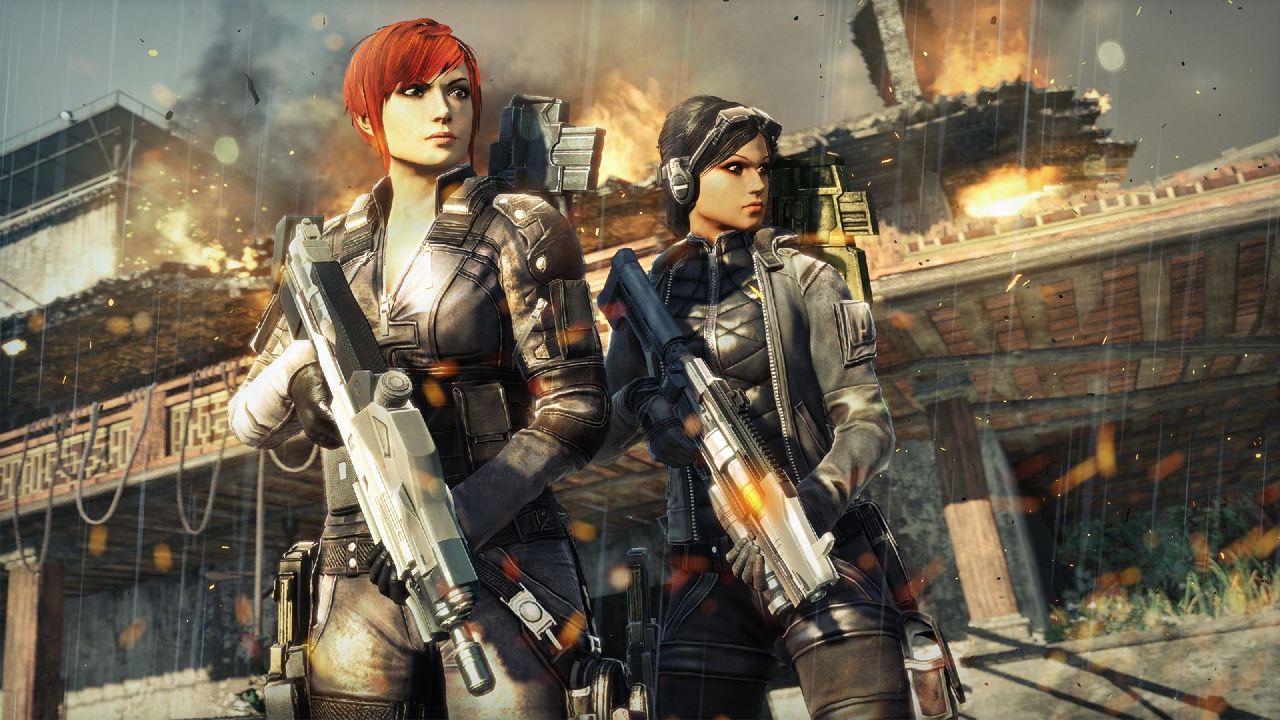 Picture Above: It’s almost like they took the picture straight out of a Hollywood movie.

So over to their new IP, FUSE.. marketed as a 4 player co-op action adventure game,
and yes it does have a 4player co-op and it does have local and online co-op, awesome stuff and that was the reason i went for the game…a game i basically had told myself to not buy…
This is the first 3rd Party game ever from Insomniac Games, they decided to jump ship from Sony and do a multiplatform game but at the same time not support the Wii-U nor the PC so basically all they did was to release an Xbox360 port of a PS3 game or actually it feels a lot like if they ported it to the PS3 in terms of sound, graphics and so on which are mediocre at best, especially if you know the track record of earlier games from the same team. 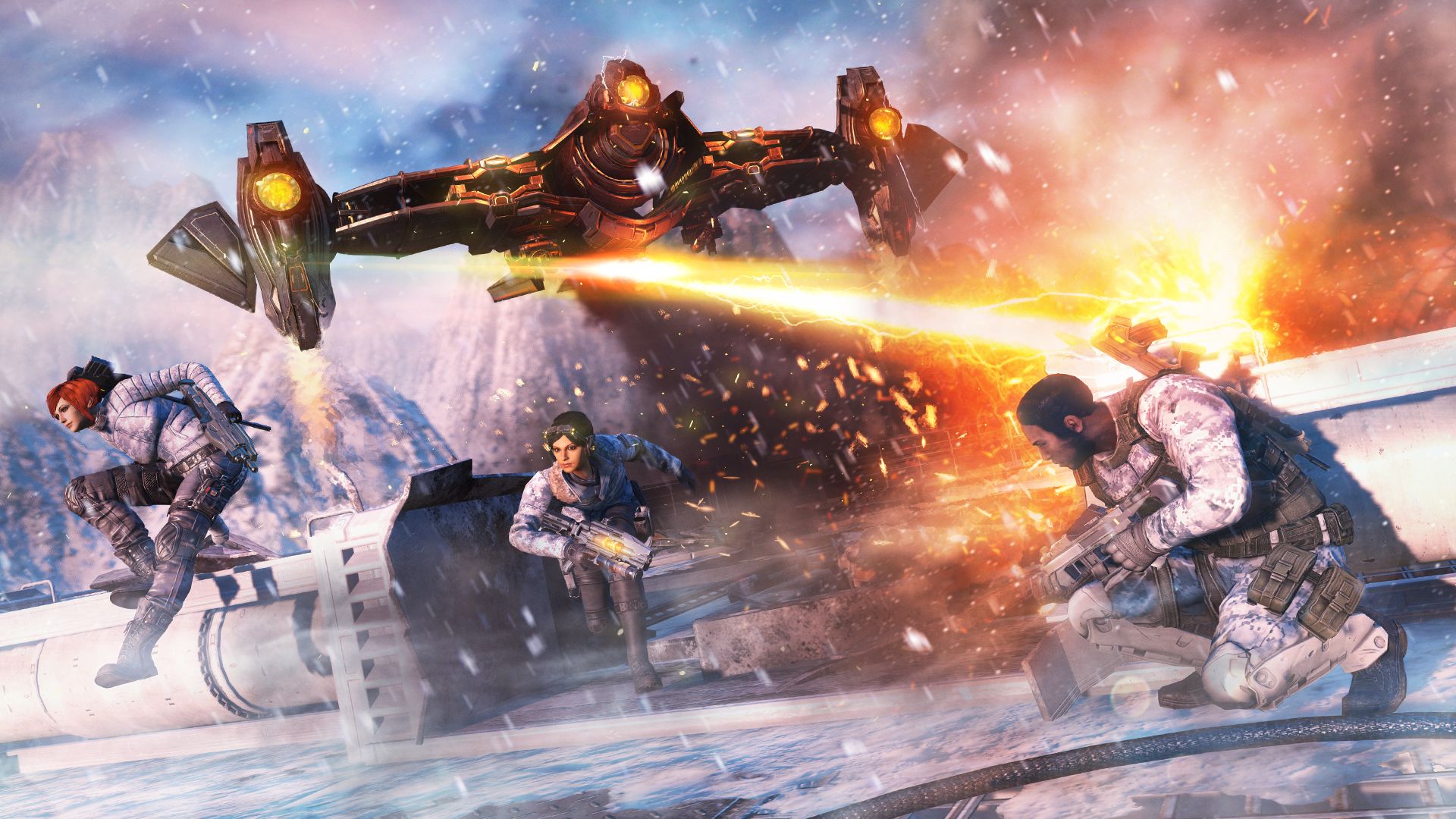 This FUSE named thing was supposed to be their breakthrough game into the multiplatform universe, a place where you would get twice the money and get the game out to all gamers out there and also get the chance to work with the worlds biggest publisher ever… Electronic Arts, the IP deal covers a series of 3 games with EA. 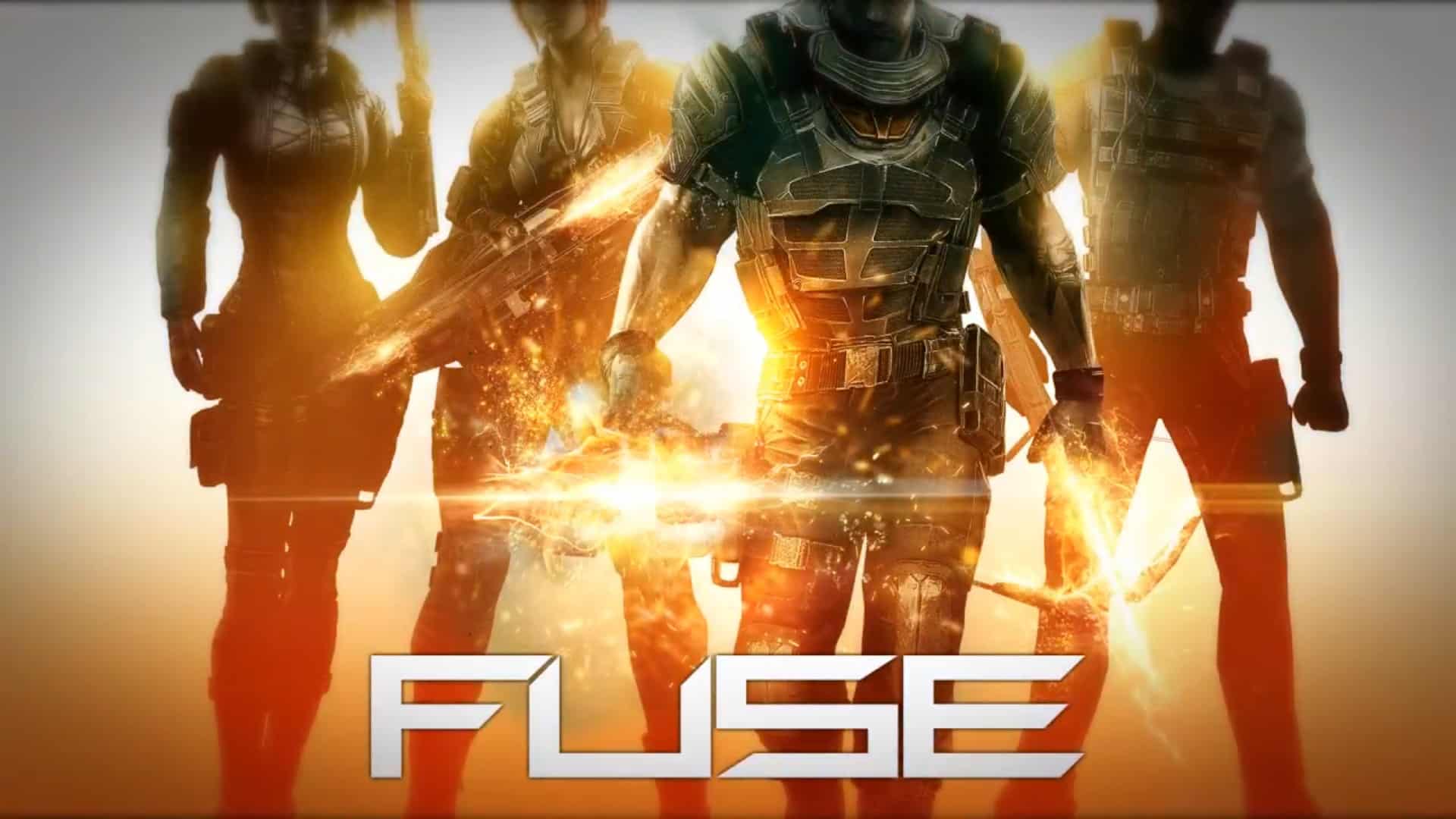 Picture Above: who said naming their creations matters?

A lot of gamers know the game as Overstrike or Overstrike 9 but for some reason they decided to change the name just a few months before release and that into the name FUSE, a really brilliant move there and best of all is that this very name is used like a million times throughout the game as the whole thing about this game is about something called FUSE… fuck you Insomniac Games, you guys used to be fantastic with names with incredible titles names like “UP YOUR ARSENAL”, “SIZE MATTERS”, ” QUEST FOR BOOTY”, “FULL FRONTAL ASSAULT” and many, many more…. FUSE… WTF ?? 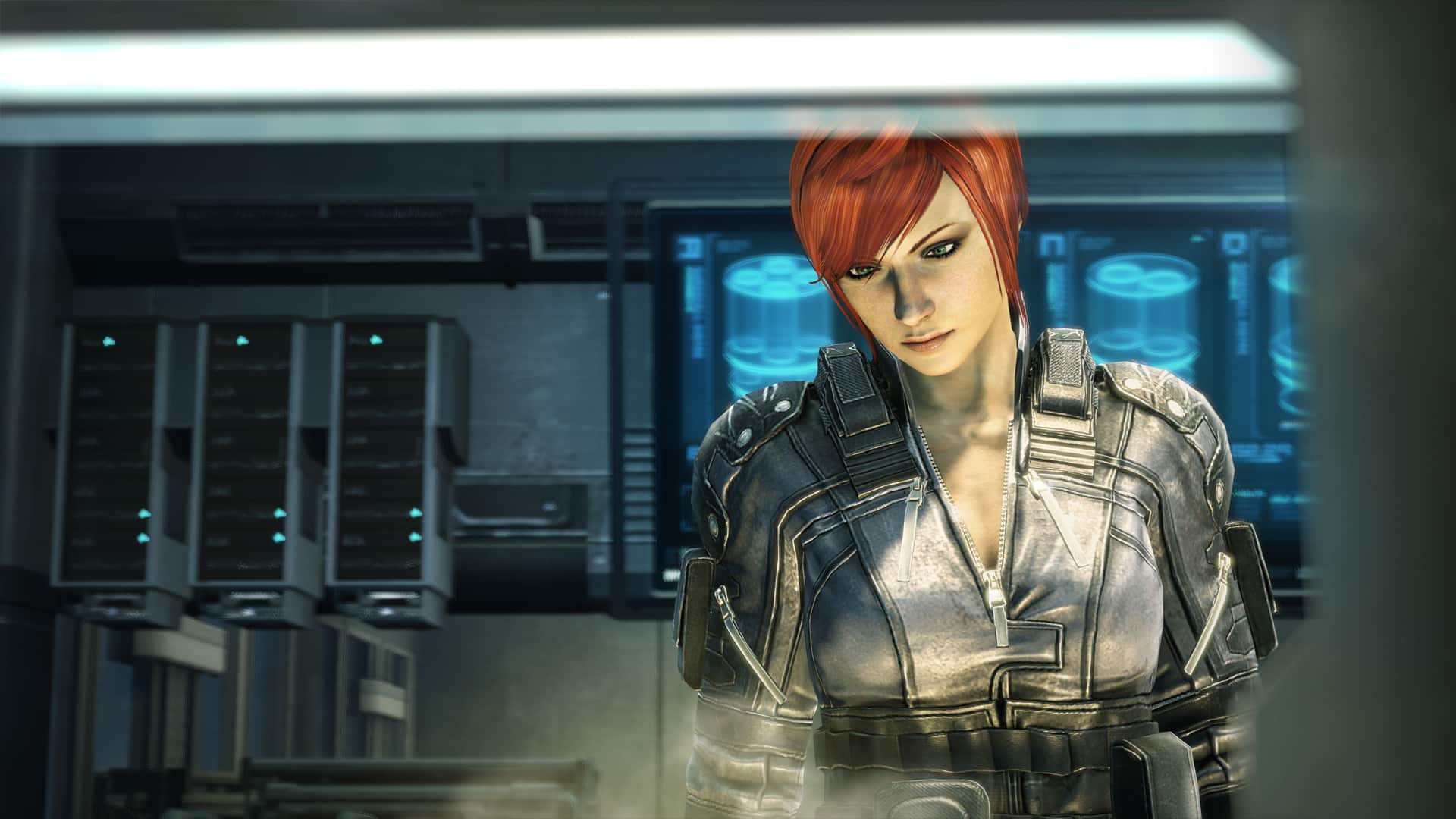 Picture Above: With screenshots like this you would never have believed it was from the same guys who made Ratchet And Clank and Spyro The Dragon…or even Resistance.

Seriously, this game looks rubbish, the graphics are all Brown and Grey and pixelated, it is obvious from the first second you lay eyes on it that this game is multiplatform and also from someone who has no idea what makes a game sell anymore… Sci-fi,Brown,STEREOTYPES…seriously?.
The models look like early PS3 times, really boring and bland and all the settings in the game feels overused, there are a few times in the game that makes you go oooh looks good but then 1 hour later you realize that it is the very same location that you played earlier or it looks identical to it may it be snow, forest or inside some boring hangar or whatever.

I have to make it clear to everyone here that i used to be a big fan of Insomniac Games but after the endless Ratchet And Clank games and Resistance 3 i somewhat grew bored of them as they have gone all “safe” on us and just try to make a game that will sell and not innovate or blow your mind or whatever….. that said, them doing a multiplatform game and worst of all name it FUSE certainly made me love them less which is quite sad as their latest Ratchet game was pretty darn good (Into The Nexus). 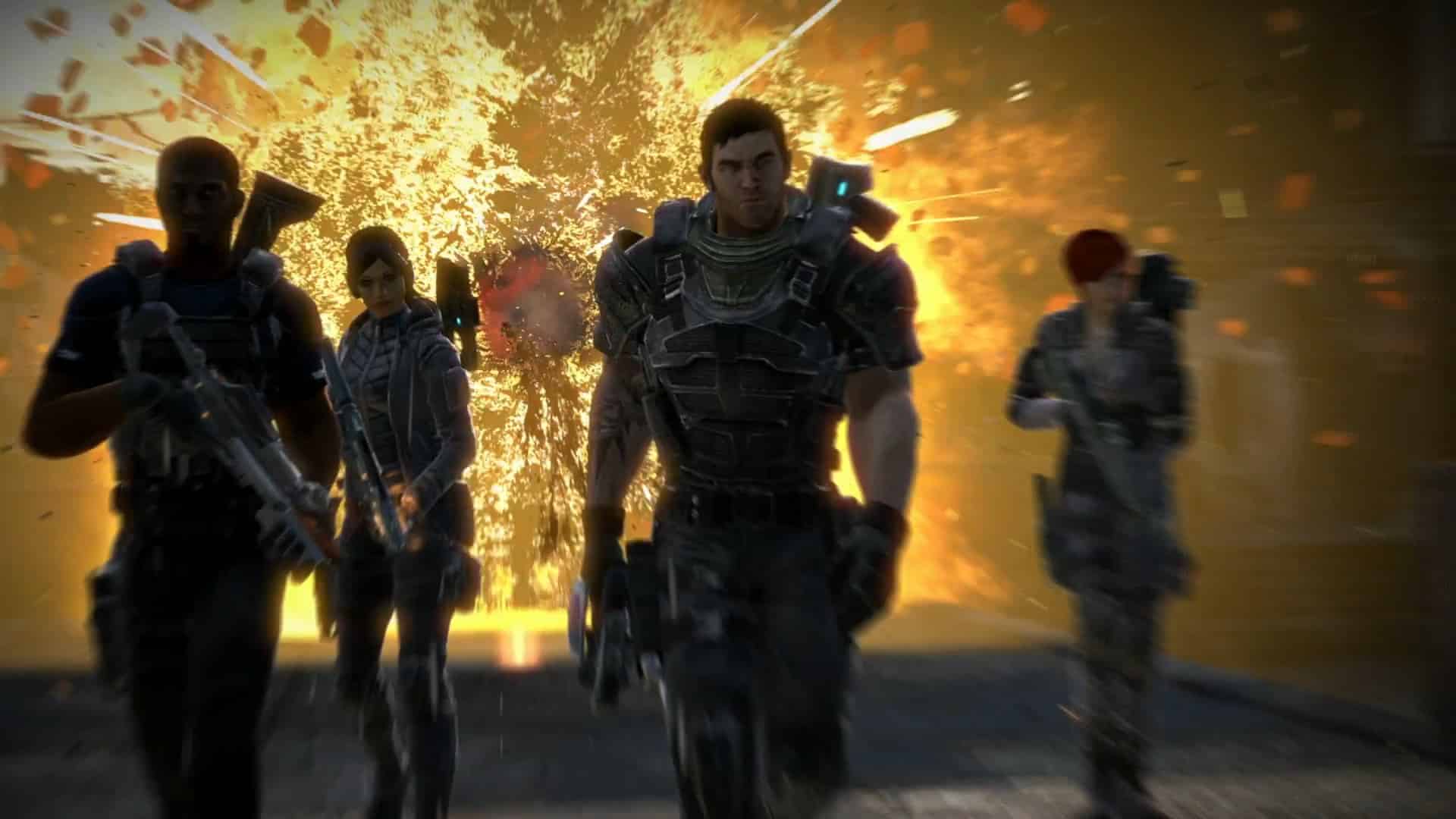 Picture Above: No this is not Starhawk… it’s FUSE… and that shield is so annoying that i nearly smashed my TV because of it!.

Don’t get me started about the spawn points, the game is very easy so you won’t die a lot but at times you will die and if all 4 team members die then you start at an earlier spawn point and of course this is BEFORE a movie starts so you have to watch it again and of course hit that switch again and then watch the next video again………..hello?.. i have no words… as it’s not like the video matters at all, it is just the typical B Movie script style “YOU KILLED MY blah blah” or “I GAVE HER THE TECH AS I WAS IN LOVE WITH HER!” yadda crap.

What a major letdown this game has been and i can relate to why no one seems to play it on my friend’s lists as this game is nothing more than a wreck and certainly not worth the time unless you want a co-op game just for the sake of a co-op game (like i did..). 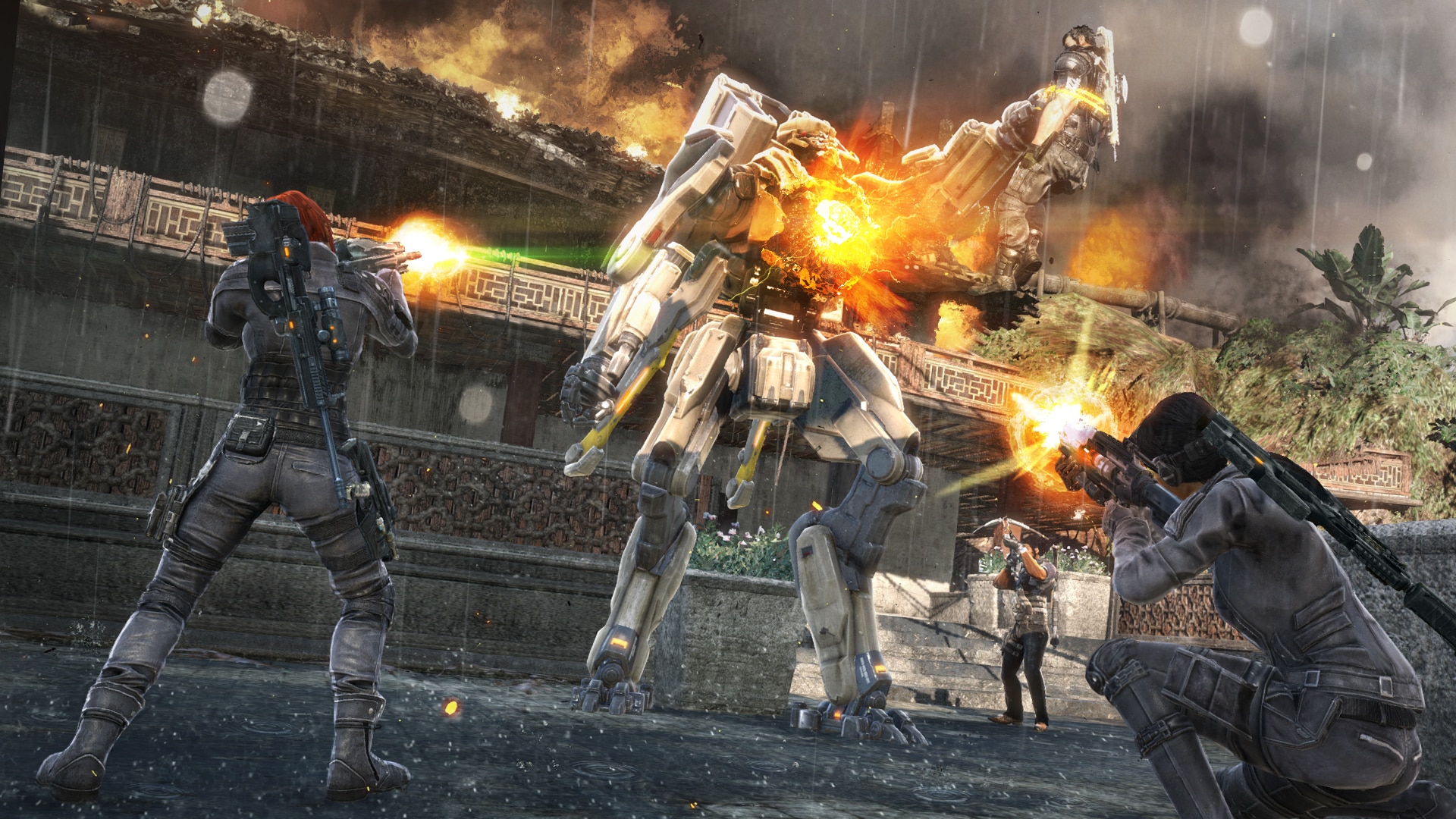 Picture Above: When the game works then it really works, fun, hilarious and more fun!.

Believe it or not, this game can be fun and quite good but only a few places where you get to use in the area where Insomniac Games have always excelled at, WEAPONS!, the weapons can be upgraded (doh!) and you have a “fuse tech-based” weapon which is the best part in the whole game and each of the 4 characters have their own special weapon.
The Warp gun being my favourite sends the enemies into another dimension…or maybe not as i have no idea really but the whole concept of shooting with the weapon is just brilliant and best of all is that you can do chain/combo kills with it, sounds strange i know but it works exceptionally good and that goes for the 3 other characters weapons too.

Another thing that is pretty cool in the game is that you can leap between the characters in the game, if you run low on health or bullets then you can jump to another one and let the AI take over the one you jumped from, works really good but i just end up forgetting all about it really and same goes for my co-op partner, sad really as the feature should have been used more but with that said it might be more used when we play the game in the legendary (hard?) mode later on…. that is if i can manage to go through the game again without getting too bored.

Final verdict? , the horrible name goes with a horrible game and horrible style, stay away and let’s hope Insomniac Games and EA forget all about this game.

Follow Us... Inspire Us To Get Better... Keep The Flame Alive
Tags: co-op, FUSE, insomniac, resistance