The Games We Never Talk About (But Should) (TGWNTABS) is back again and this time we will talk about a rather new title (by Amiga standards), it came out back in 2000/2001 and it sort of never got the attention it deserved thanks to a very dwindling Amiga community.

Land Of Genesis was developed by a very small “first timers” team and at first that is most likely rather hard to believe when you play the game, as from the very get-go the game is filled with technical achievement and trickery that one would normally never expect from inexperienced game developers, the reason for the technical level is because they were demosceners of course and good ones too.

Ok, Over to the game then…

After a rather simple intro but yet very effective (back then at least) you get to the main menu, a really good menu picture with more options than most Amiga games over the years, interestingly there’s even a difficulty selector although that one is broken before you patch the game (I put the official patch/updater online here) , or at least that is how I see it so make sure to update the game (or use this trainer from Stingray). 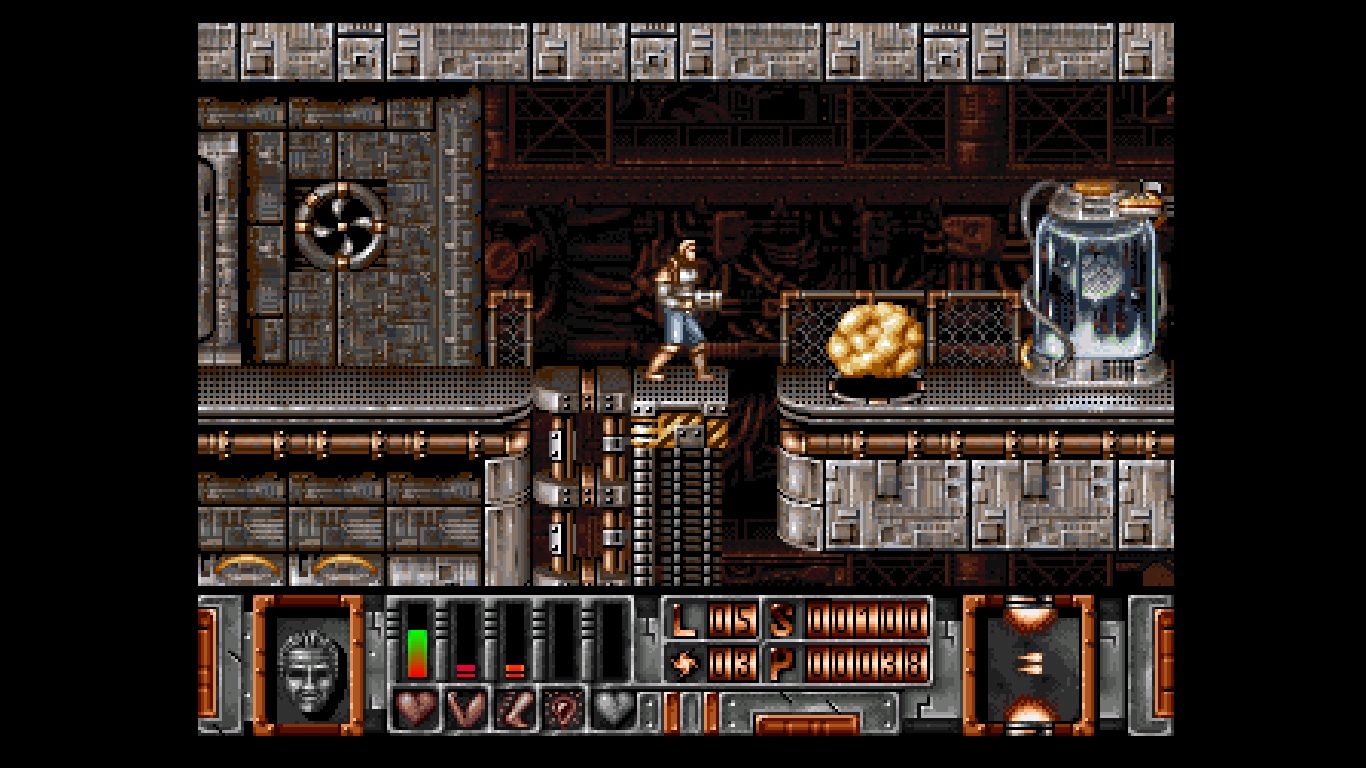 Once in the game, it ain’t hard to see which games inspired the developers to make Land Of Genesis – It certainly feels like a mix of Turrican and Project-X and other high profiled games from the heydays of the Amiga.

The first thing you will notice in the screenshots are the excellent graphics but there is more to it because if you play the enhanced version (68030 CPU and up) then you will get a wonderful parallax scrolling as well as some nifty transparency effects as a bonus.

It looks really good, some might think it is too brown or whatever but it fits and the game design is consistent with colors and setting.

The first level can be a bit confusing at first as you have to look for keys to open doors, these keys are spread out over the level and you will have to look around a bit to find them but once you figure out how it works then it is more or less a “walk in the park” for most seasoned gamers.

You will meet lots of enemies and you will find a lot of coins too, you get quite a bit of weapons and power-ups throughout the game which helps on the variation and pacing of the game which is rather good for such a big game although there are some annoyances to be found in the level design that will throw you off your path. 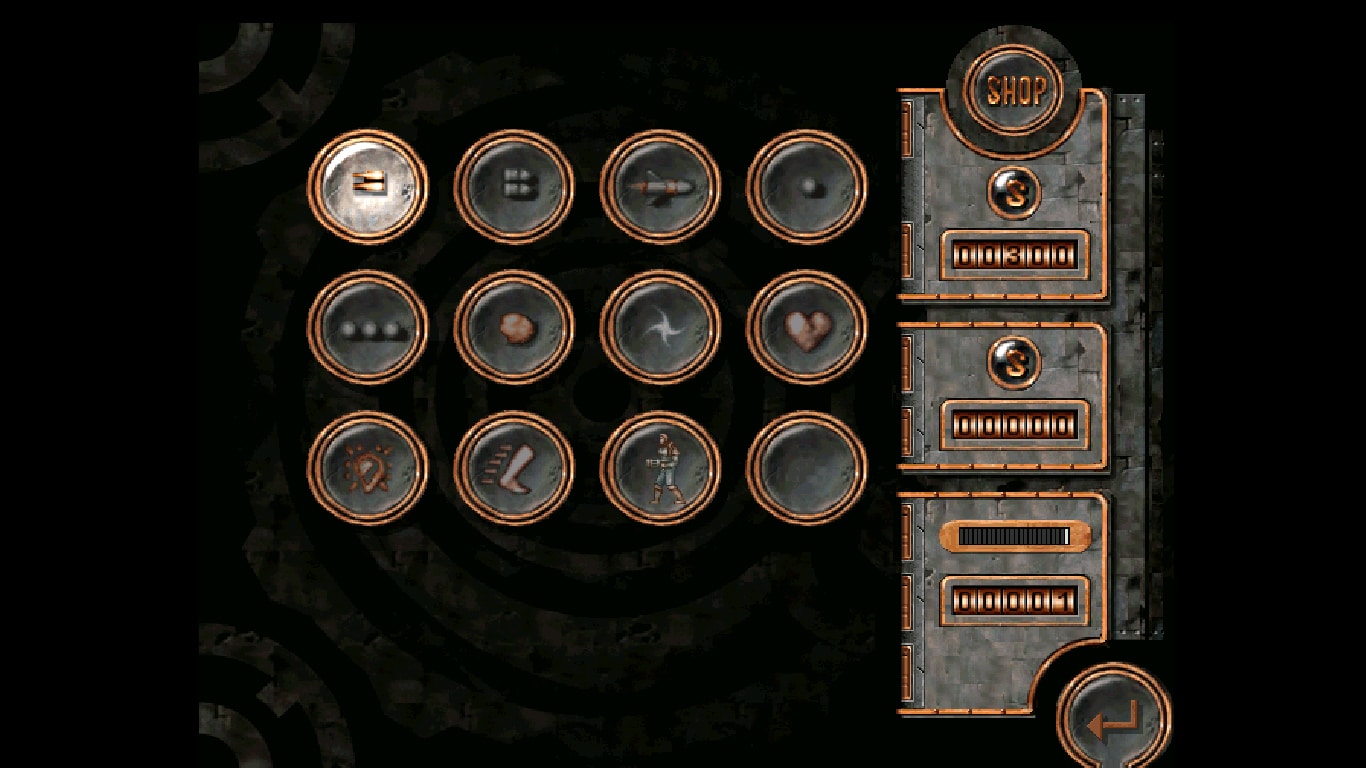 After you beat a level you get to the shop, I mostly go for life and health upgrades here as the game can be rather brutal on them, nonetheless, there are loads of stuff to buy and as you can see in the shot, it looks great too. 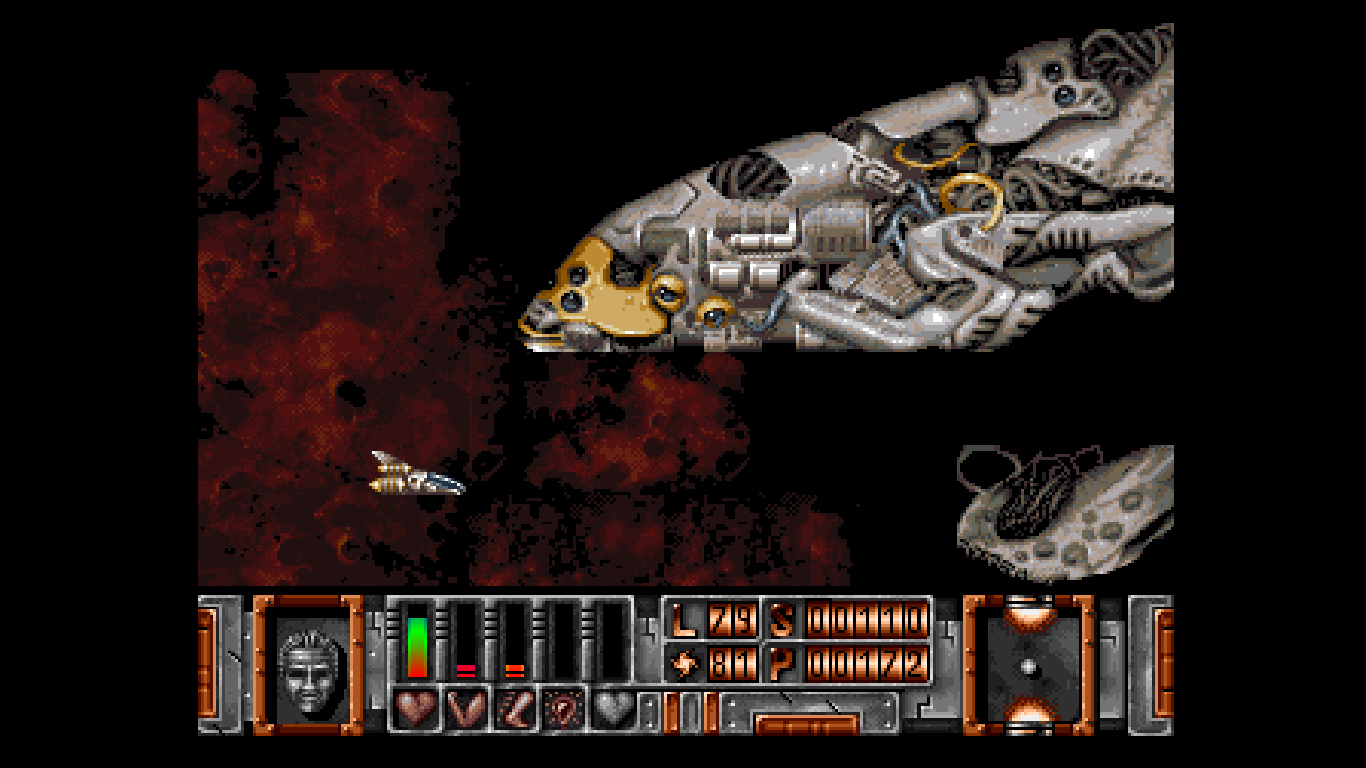 Once level 1 is over the game turns into a rather excellent Horizontal shoot em up game, utterly brilliant graphics and effects all over the place with huge enemies and loads of things to shoot.

The music helps to set the mood here, Andreas Sturmer really did wonders here with his music (in the whole game really).

Dodge, shoot, kill and have some great fun at the same time, the speed of these levels go up and down in a progressive way which helps to make the game really difficult at times but never so hard that you want to give up.

Things pick up the pace for the next levels, the graphics changes dramatically too and yes it looks even better moving than in still shots, especially on my 1084S CRT monitor.

The graphics, sound, and gameplay work wonders together with all the hardware trickery that is going on in the background. 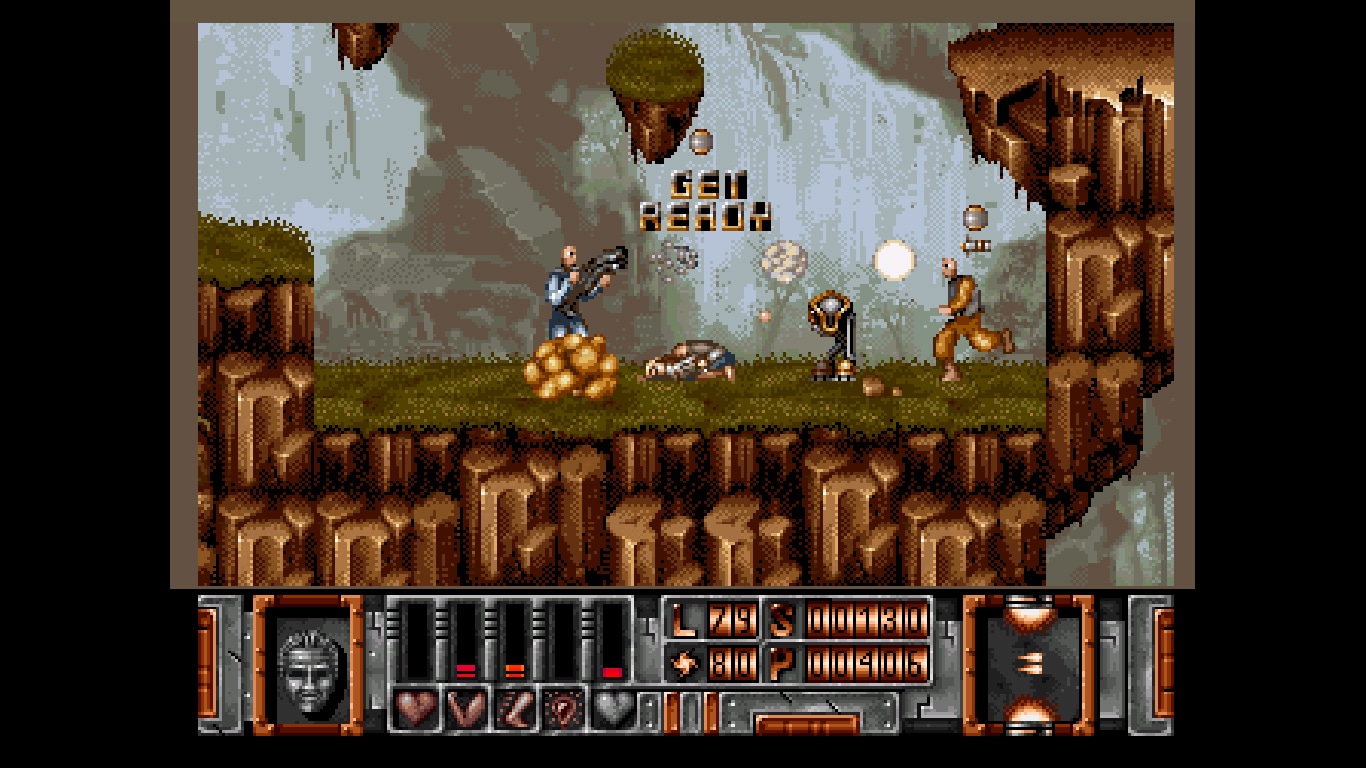 The game goes back into a walking game after a few flying sessions and yes the game manages to change the looks once again, this time it is inside a forest with some buildings and stuff and it just looks and plays very Console-Esque.

The jumping mechanics feel good enough and there is quite a bit of shooting while jumping to be done but it never gets annoying as you can do most things with high precision.

The parallax scrolling is very effective at this level. 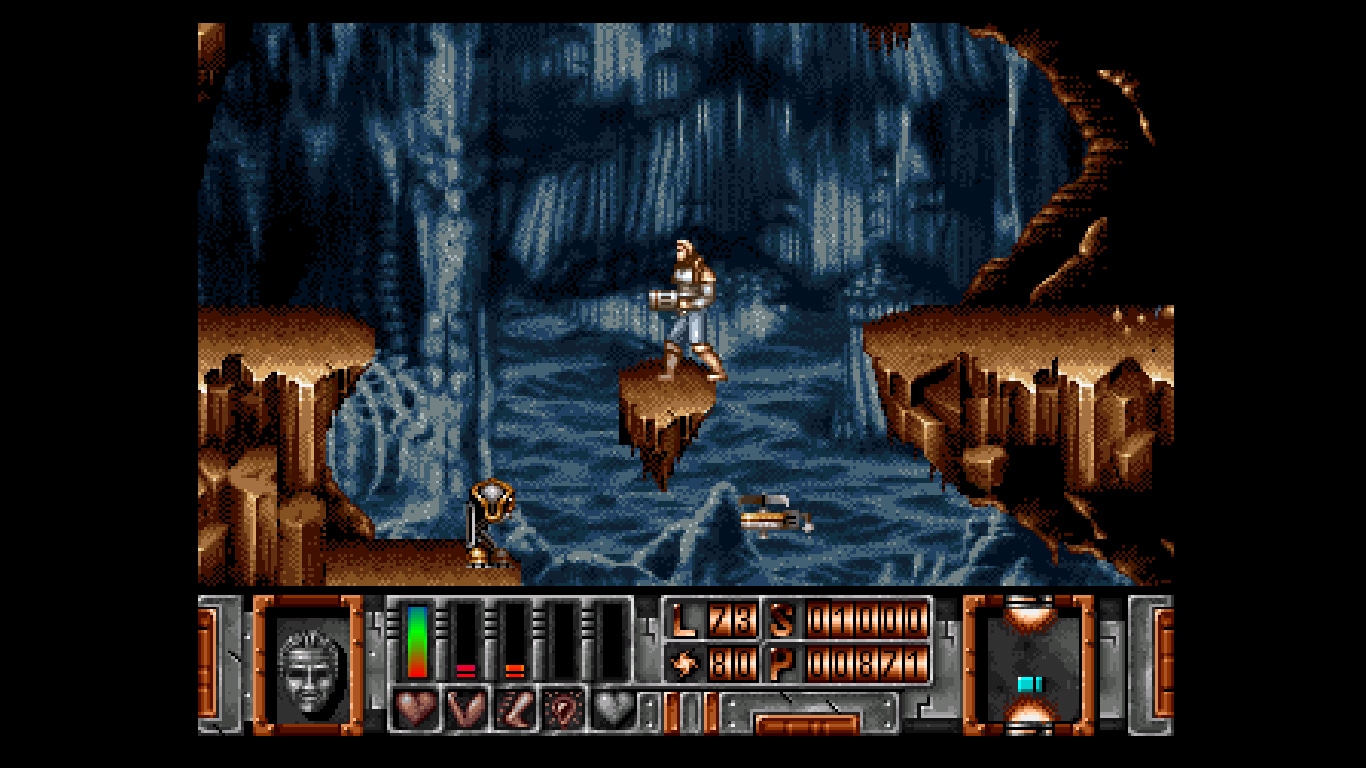 Just when you thought it couldn’t get more varied this happened, the cave level. Yes, you still hunt for keys for the locked doors but the new style really helps to set the mood for the level, as before this level also looks gobsmacking in the enhanced version (if you got a 030 or higher).

Loads of precision jumping is required here too but by the time you have reached this level, well, let’s just say that you are most likely a maestro in jumping by now.

Really varied graphics and sound, well worth your time and money, that said the game is actually free now thanks to Amiga future and the developer who decided to give the game out a few years back (link further down below).

Sad part though is that they never really made any money on this game, but then again who did make any money on Amiga back in 2001 except for Apex Designs game Payback… 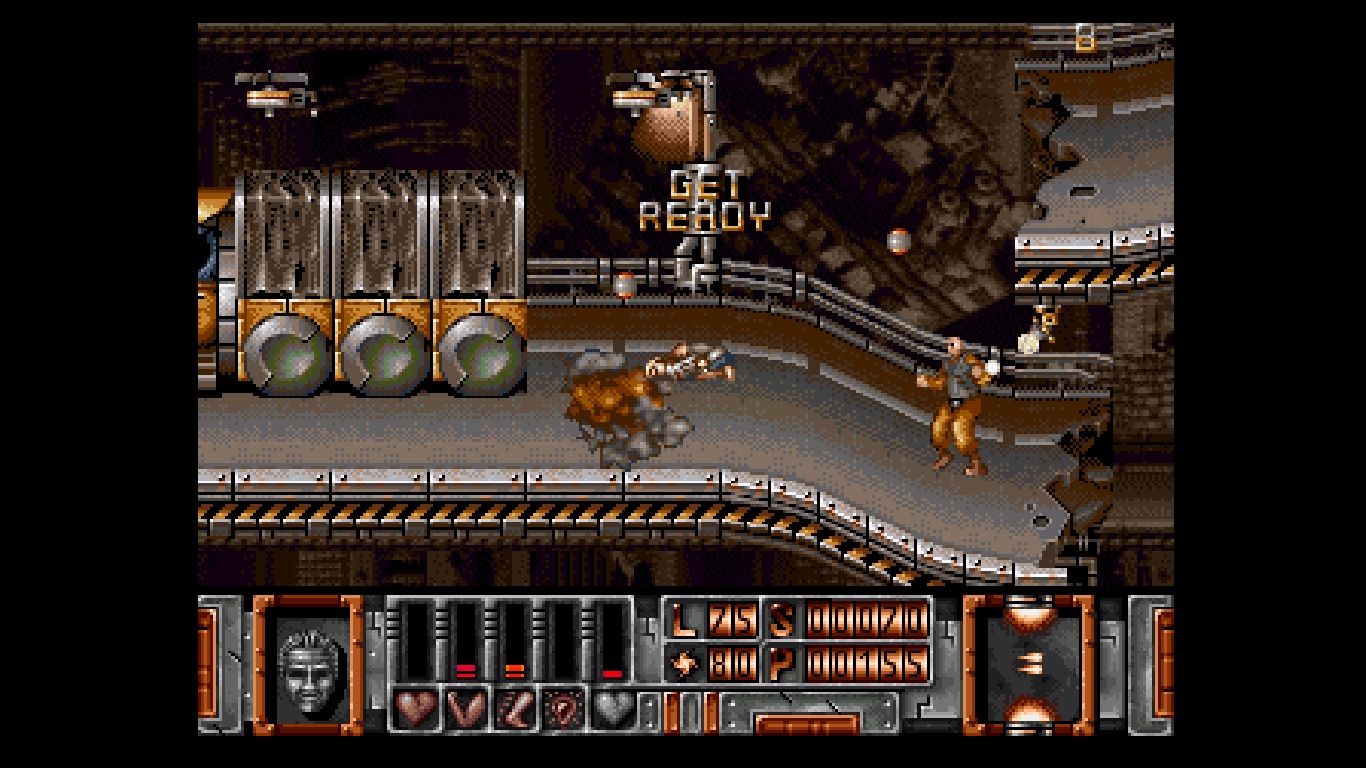 And yes, it keeps on getting better and better, here you see one of the more open levels where I certainly had to adjust myself to, a lot of running back and forth and all over the place but do you know what? It didn’t bother me at all because the game is fun and the music and graphics helps to make it bearable even though when you have to walk all the way back to do something you forgot or whatever (the last level is a bit of a pain).

Anyway, if you want to give the game a chance then go grab the free download version right away (you have to log in to be able to download it) and maybe, just maybe send the developer a message thanking him for his wonderful work?

The strangest thing about the game release is how much they cut corners on the actual production of the CD and Box design, if I had not bought it straight from the developers/Publisher on the release day then I would have thought this was a counterfeit/bootleg release.  The CD ain’t pressed and it is just a White Verbatim CD-R with a printed label on it, the actual print of the cover is a tad better although far from anything professionally done (like their Bubble Heroes release a year or so before).

I pre-ordered the game before it came out and I enjoyed the music so much that I even went out and bought the OST release, yes it is basically the same audio CD that is included with the game but I did it because I wanted to support the team and I won’t ever regret that even though I expected better print quality on the CD and a proper printed cover etc.

It is a shame that Crystal Interactive or ClearWater Interactive never got their big hit on Amiga, both games they published (the former one was the utterly brilliant Bubble Heroes) was of excellent quality and well worth anyone’s money, they went on to publish other games for PC and Gameboy Advance over the next years but I can’t say I really found any big hits there either, well, except for Gilbert Goodmate (demo on Aminet!) which is awesome and one that was originally meant to be an Amiga game too.

Thanks to RoarTJ for the screenshots, Box shots are from my own collection as always.

6 thoughts on “The Games We Never Talk About: Land Of Genesis”