Simone Bevilacqua (RETREAM) contacted me a while back regarding plans of running a second print of his Amiga OS4 games “Huenison, BOH and BOH Advance” and if I wanted to pre-order it as he knows that I collect Amiga games, and yes I am one of the guys which never got around to order them in 2018 which meant that I had to say yes right away of course.

The games popped up about a month or so ago now and since I have had a long vacation means that this post is a bit outdated now but maybe not too much as this is an Amiga site after all.

The thing with these games though is that I bought both BOH and Huenison on release ages ago and played them quite a bit too, especially Huenison but I never saw much hype or talk on the internet about them over the years, that said the Huenison article I did on the blog here has had several hundred thousand views over the six years or so now, but most activity seems to come from STEAM or such and not Amiga related sites in general. 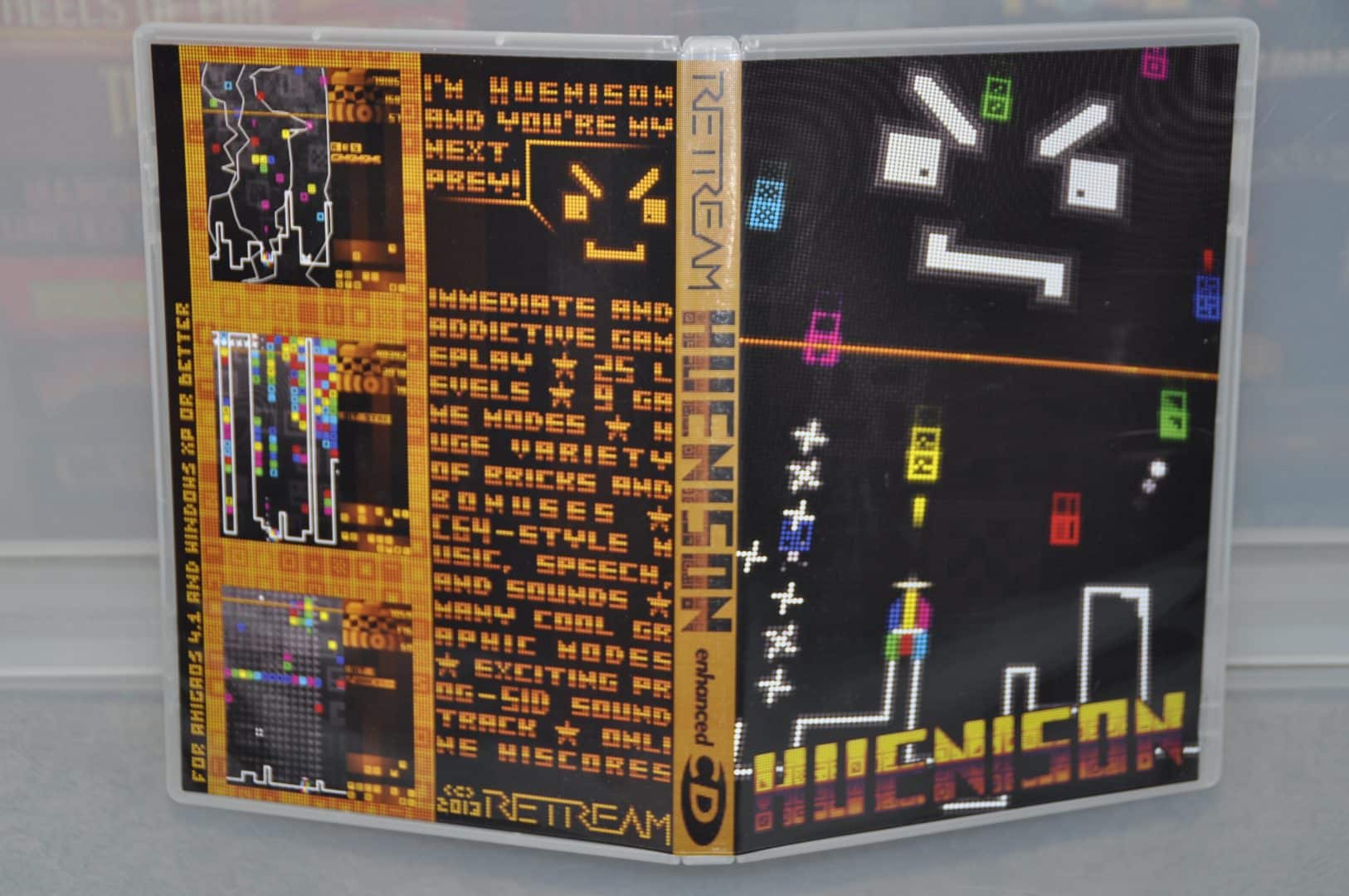 Huension is a multiplatform game but I am only interested in the Amiga version of course but one of the reasons why Amiga people ain’t talking about the game might be because it is an Amiga OS4 game which means people with Classic Amiga’s have never even heard of this game and that is sad as Huension is actually a rather good game and one that many might have enjoyed thanks to the mix of new and old-styled game mechanics.

The box itself is chaos at best, I get stressed just by looking at it but for some reason, it also makes me calm 😀 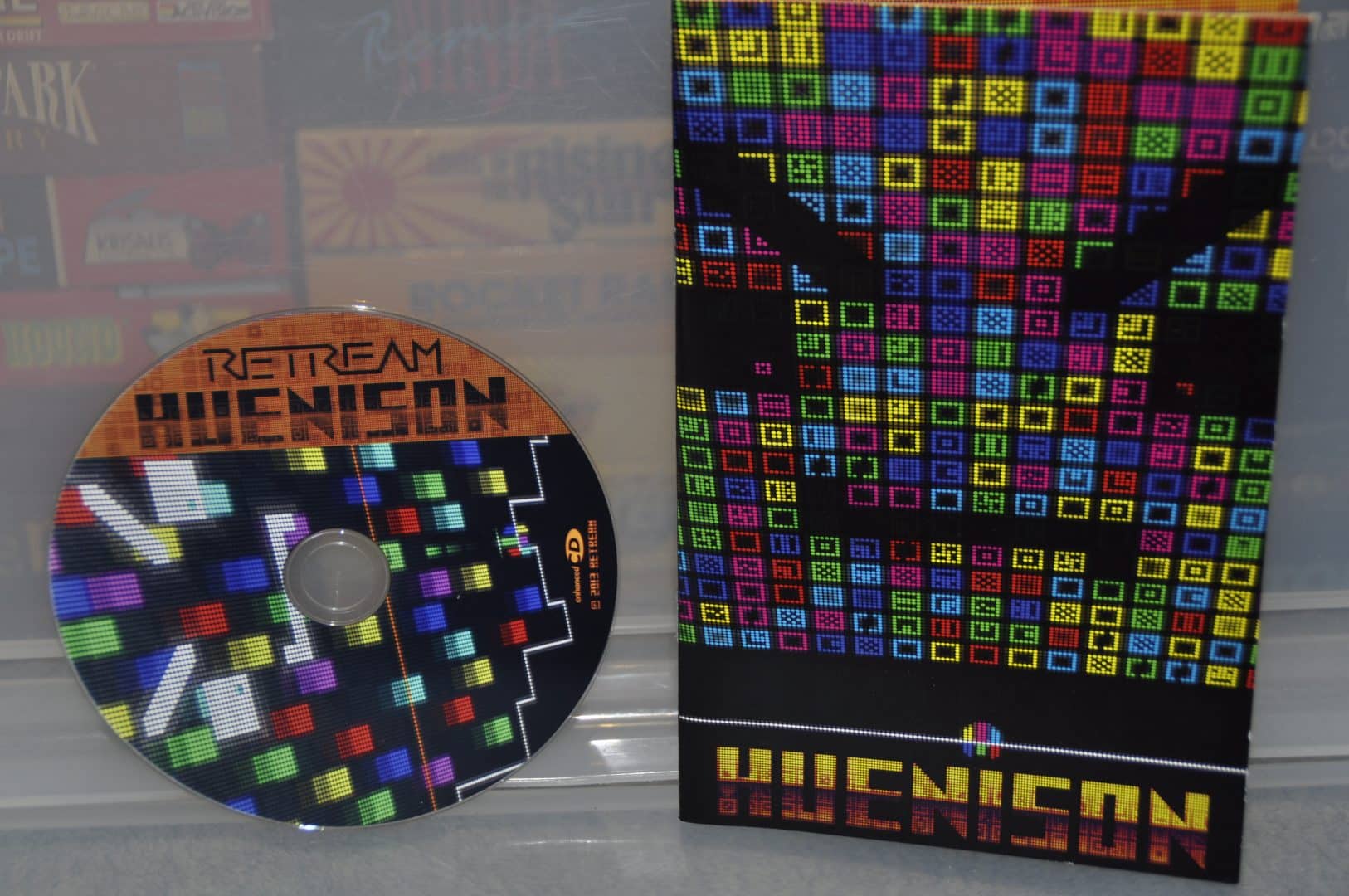 The CD and the front of the manual though are much better, lovely colours and a quite nice overall look. 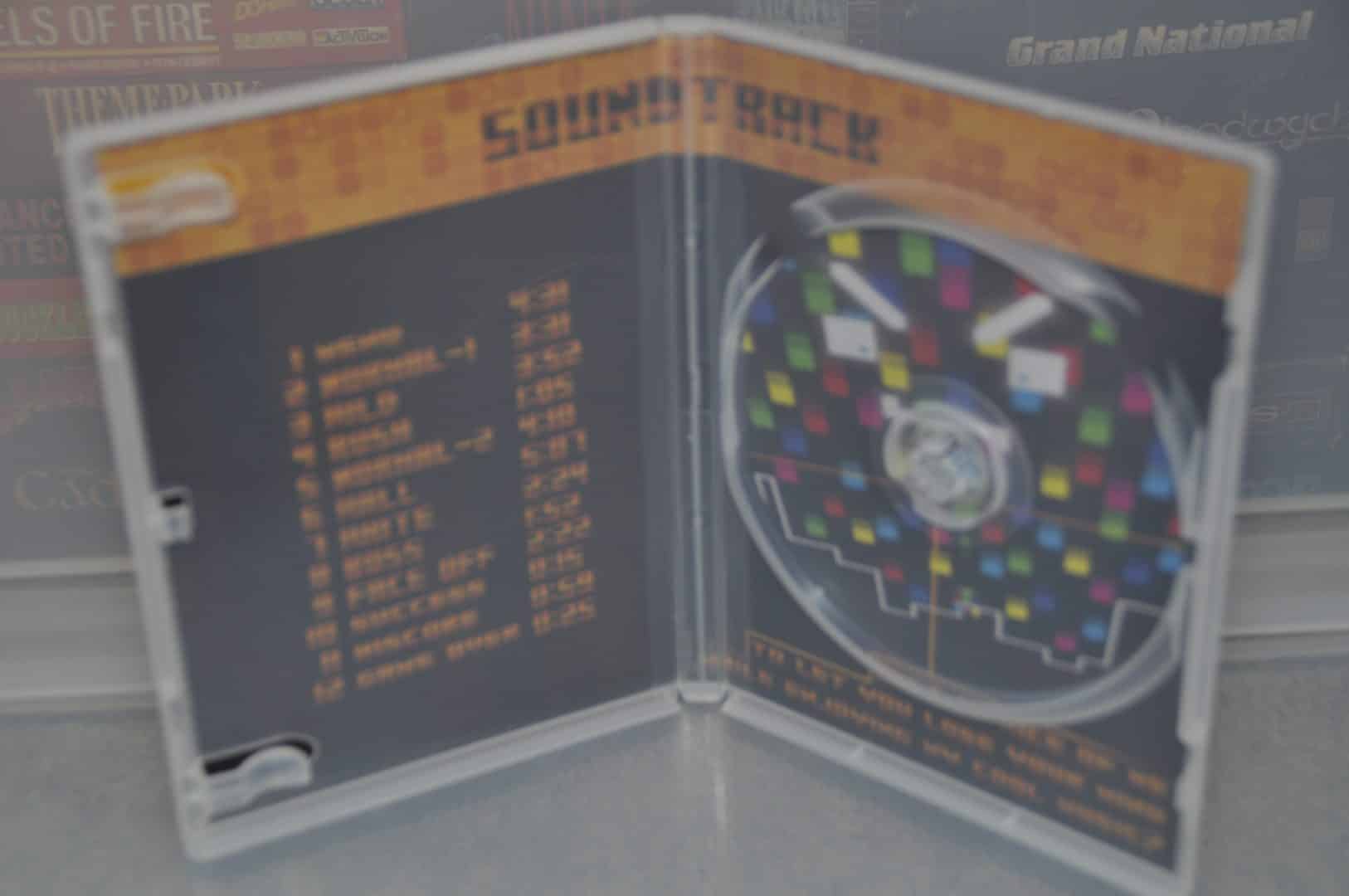 The clear DVD cover used is there for a reason too as you can see above, the soundtrack list from the game is listed there, nicely laid out and presented in a good style.

I must admit that I can’t say I remembered the music from the game but when I tried the game again then all came back to me and the soundtrack of Huension is definitely not a bad score at all.

As with all of Retream’s games, there’s a big manual included and yes it is very nicely laid out (although not as good as the Skillgrid PDF/insert one) and easy to read which is very important as the game is difficult to grasp without some sort of instructions.

The Huension Enhanced CD release is as far as I can tell one of those items every Amiga OS4 owner out there should’ve had in their collection, that won’t ever happen as this was a very limited production run and while the market may be small it certainly ain’t as small as the Huension run.

Where to buy it? , Download version costs $4.99 USD can be found here.

A word of advice, grab it while you can or be stuck forever with the digital download version. 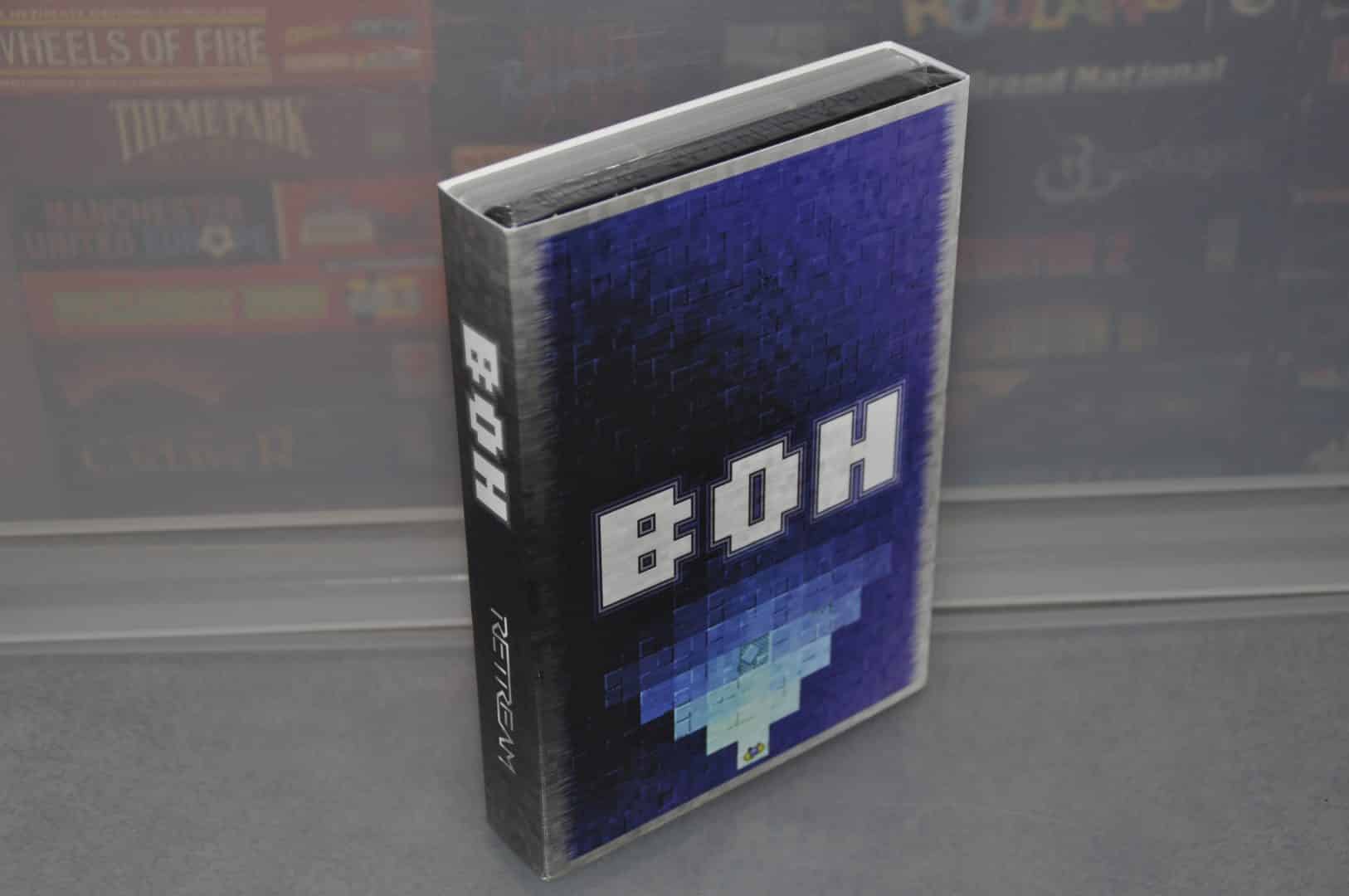 The second game in the package is actually 2 games packed in a dual box type of sleeve which includes both BOH and BOH Advance.

BOH by now is on its 10th anniversary and I already had this game from earlier (2013 or something?) but I never got around to review the box or anything, typical me…busy bee.

Happy to have this pack-in anyway as it stands on the shelf as a nice collectable, and best of all they come from a good friend.

Love the look of the paper sleeve, very simple style but the colours and design work good. 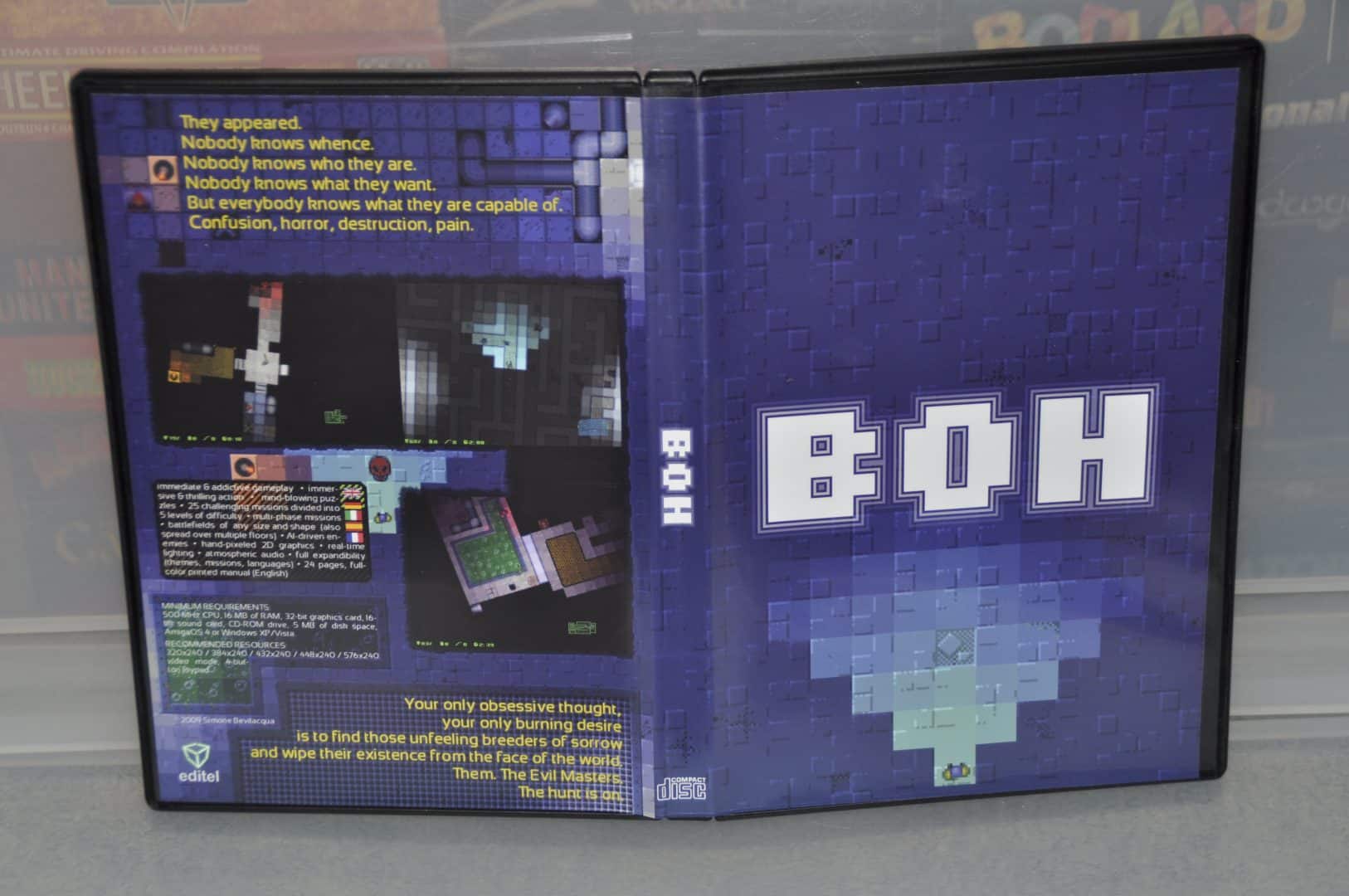 BOH is most likely the game from RETREAM that is most known outside of Amiga land, I seem to remember that Eurogamer covered it as well as other big sites out there, heck i wish they would have covered Skillgrid too as that certainly deserves some attention out there.

The BOH game box doesn’t look as good as the paper sleeve thingy but it does the job nicely with its colours and design. 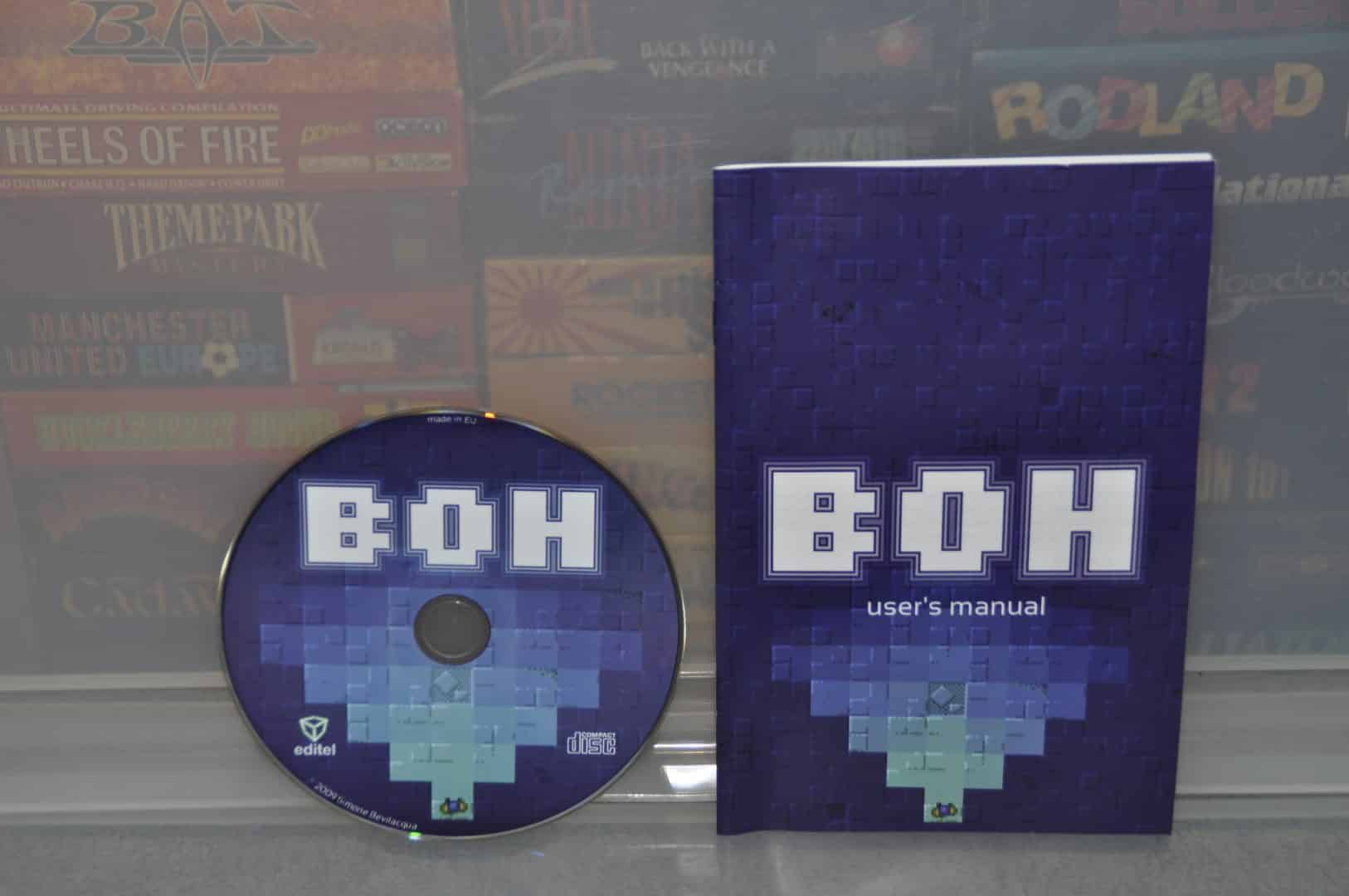 The manual and CD looks exactly like the front cover (sadly) but for some reason, they look better than the cover.

A very detailed manual is, of course, included, loads of pictures and the quality and design is top-notch.

BOH sits on my shelve begging to be played more, I will return to it one day for sure.

Now, over to the last game in the bundle…

Where to buy it? , Download costs $5.99 USD version can be found here. 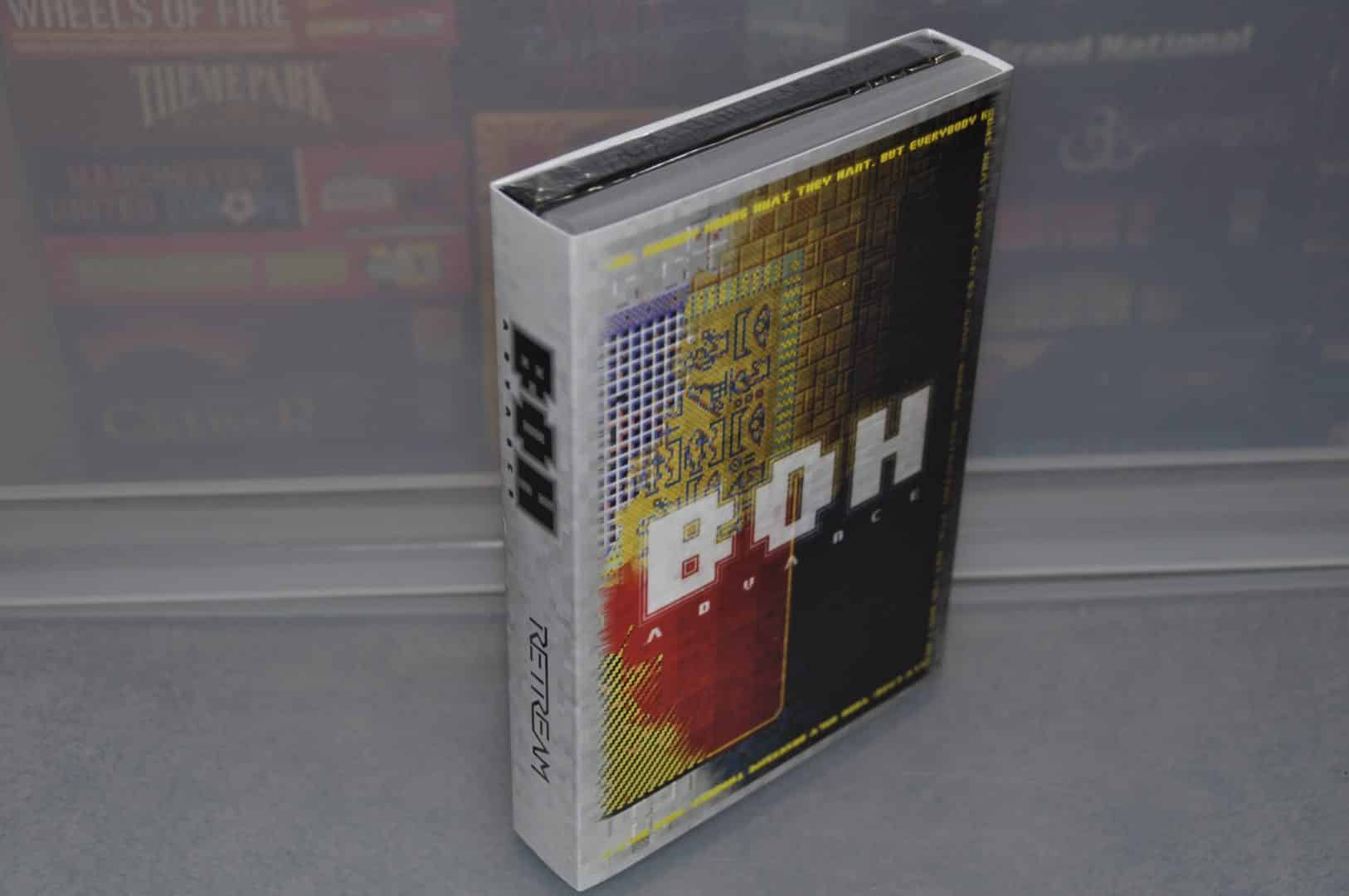 BOH Advance is the second game in the bundle, it ain’t a sequel to BOH but more of a name upgrade after the nearly 10 years of updates added to BOH.

This is most likely the game we all should be playing right now and I hope to find time to play a dungeon crawler again sometime into the future.

This collector’s edition is yet another hint to me that I need to focus on some of the more obscure titles on the Amiga. 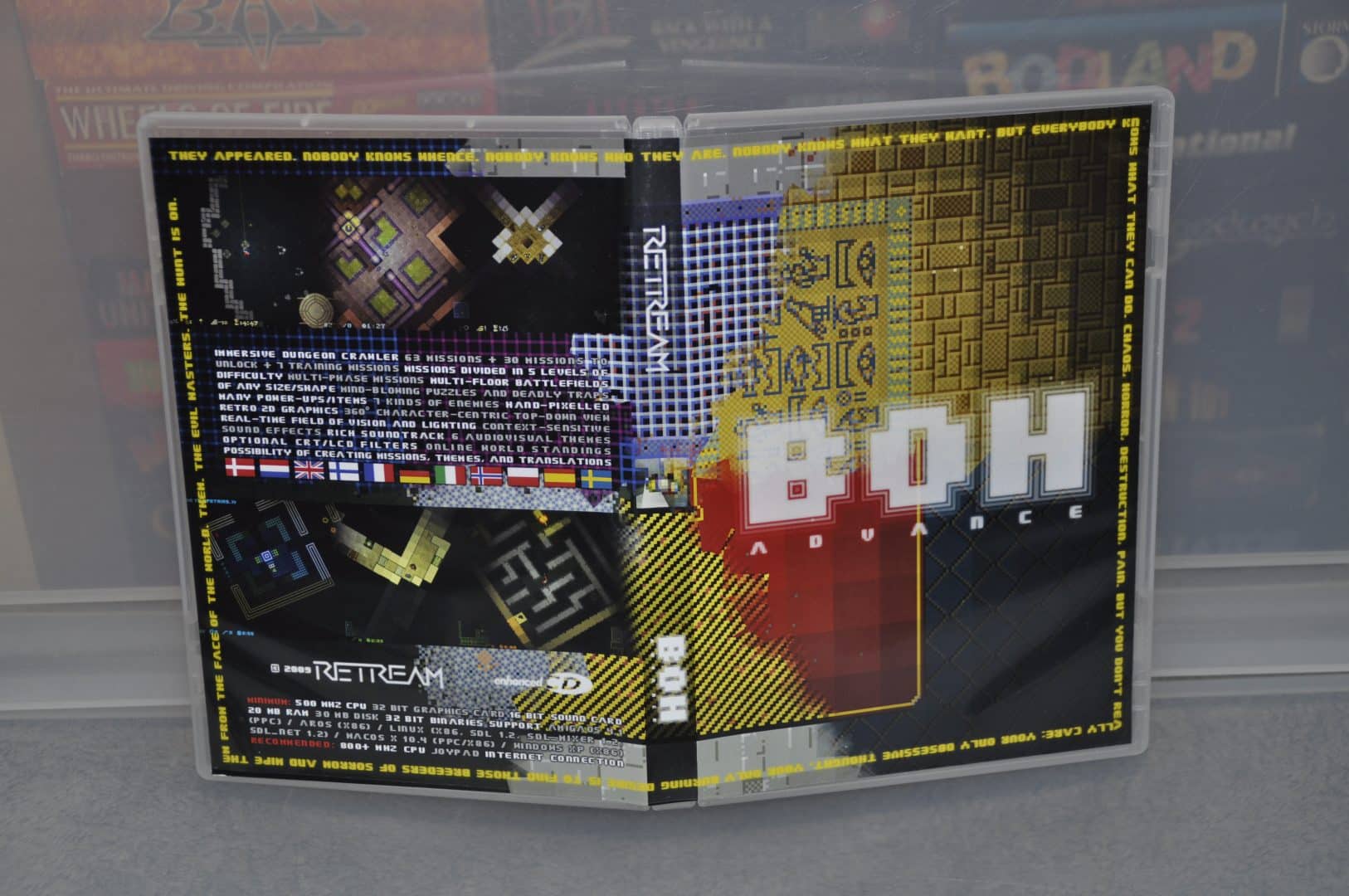 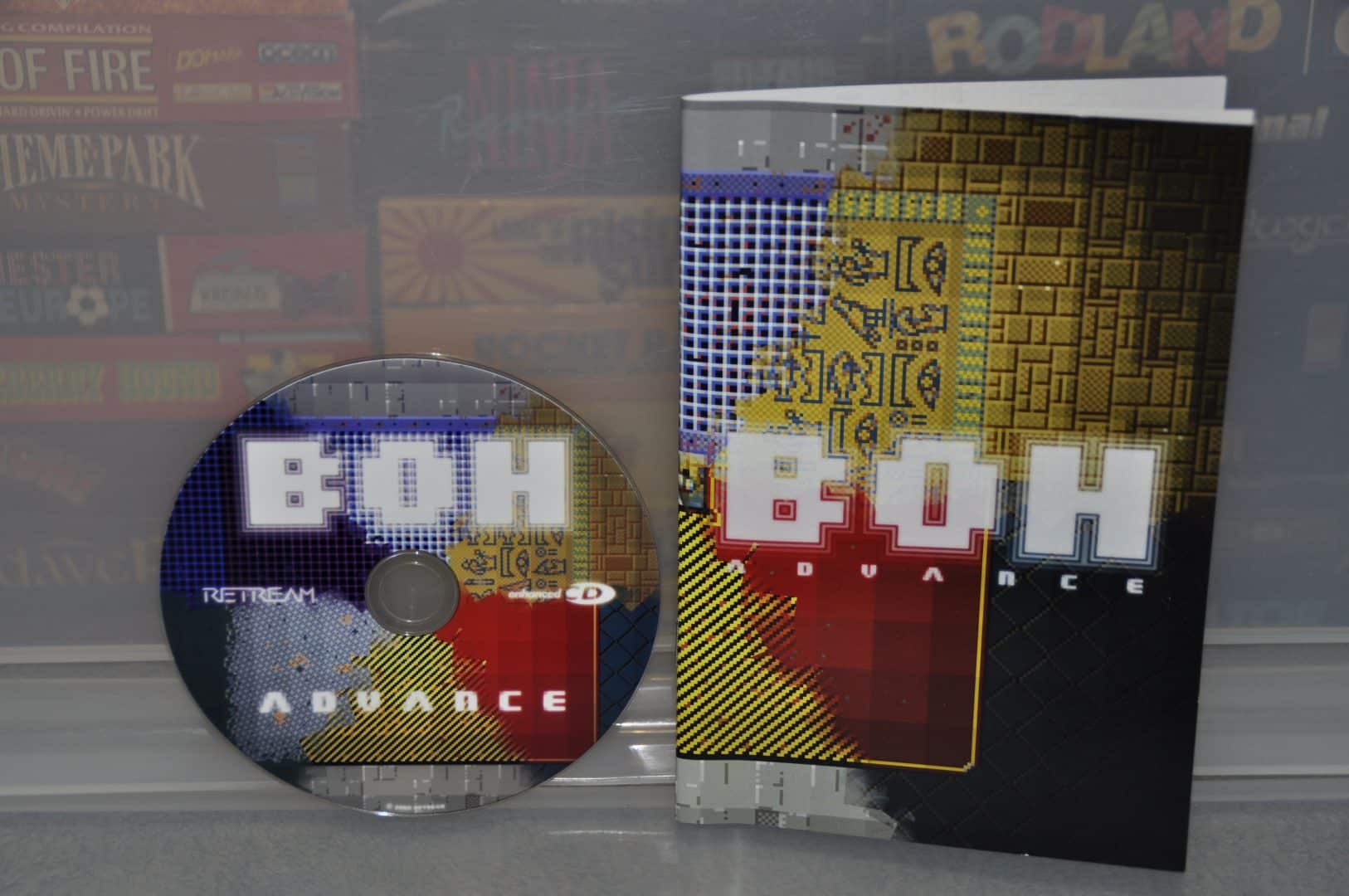 The CD and manual use the same design as the front cover but it ain’t identical.

Gotta love the inside of the DVD case, a good idea and it works rather well.

The manual is very similar to BOH (obviously) and one that you have to read to understand the game and nothing beats a well-designed manual when you actually have to use it.

Where to buy it? , Download costs $4.90 USD version can be found here. 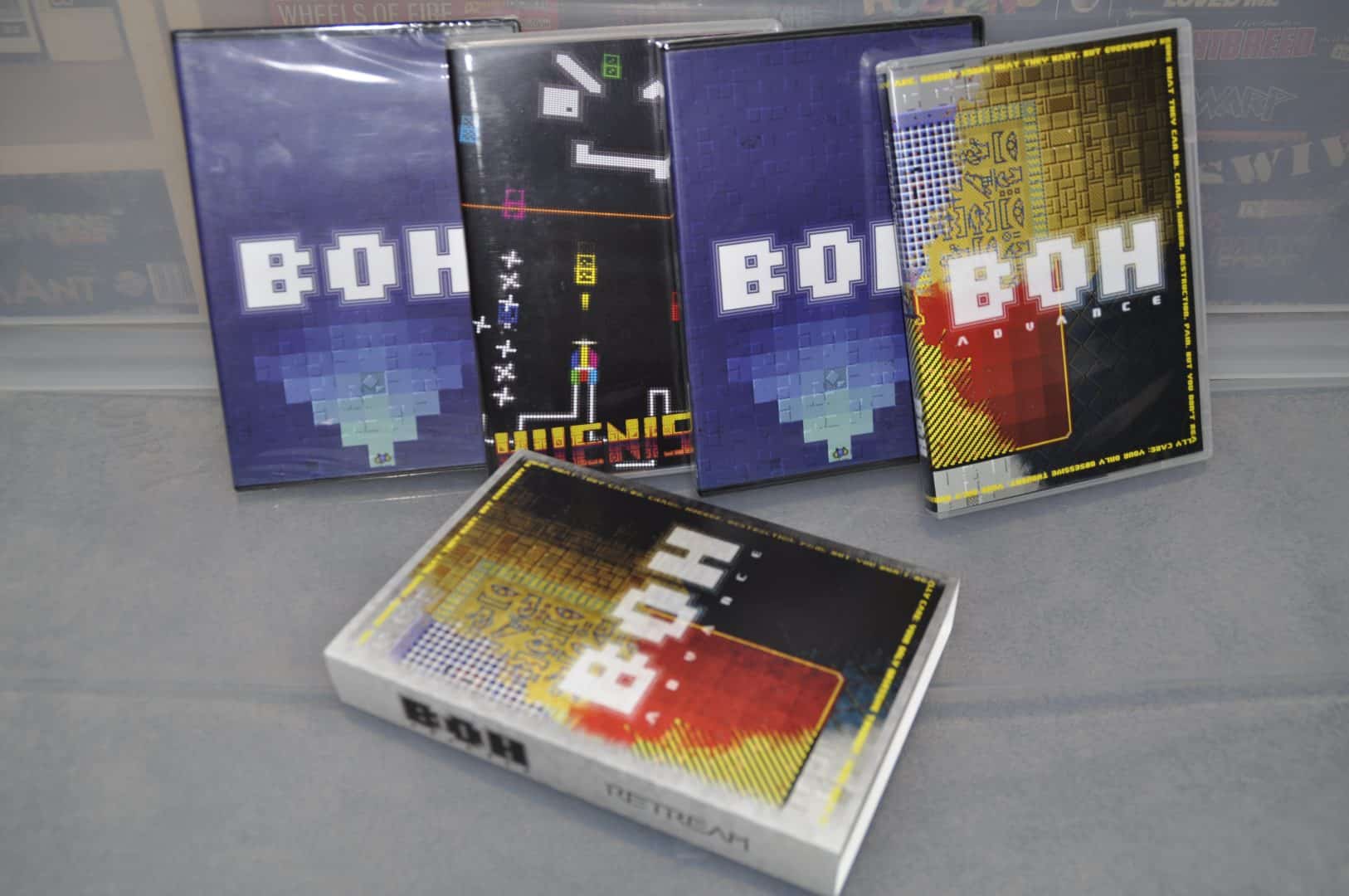 Here you can see the collection of games, one double just to “show off” and yes you won’t get all of these in one package either, it’s either BOH or Huenison Collector’s editions. Luckily you can buy all of the games very cheaply via digital download at the Itch.io site which many of you probably know of already, that said you might still be in luck getting these in physical form but to do that you must contact Simone/RETREAM directly either via the website or on Twitter.

Support Amiga developers, it’s worth it and yes spread the word too as every single sale does matter.