The odd thing with the shoot ’em up genre is that there’s probably more of them on the PlayStation 4 by now than there ever was on the PlayStation 3, one of the reasons for this was that Xbox 360 had some sort of an exclusive deal with several of the big Asian companies that make these kinds of games. 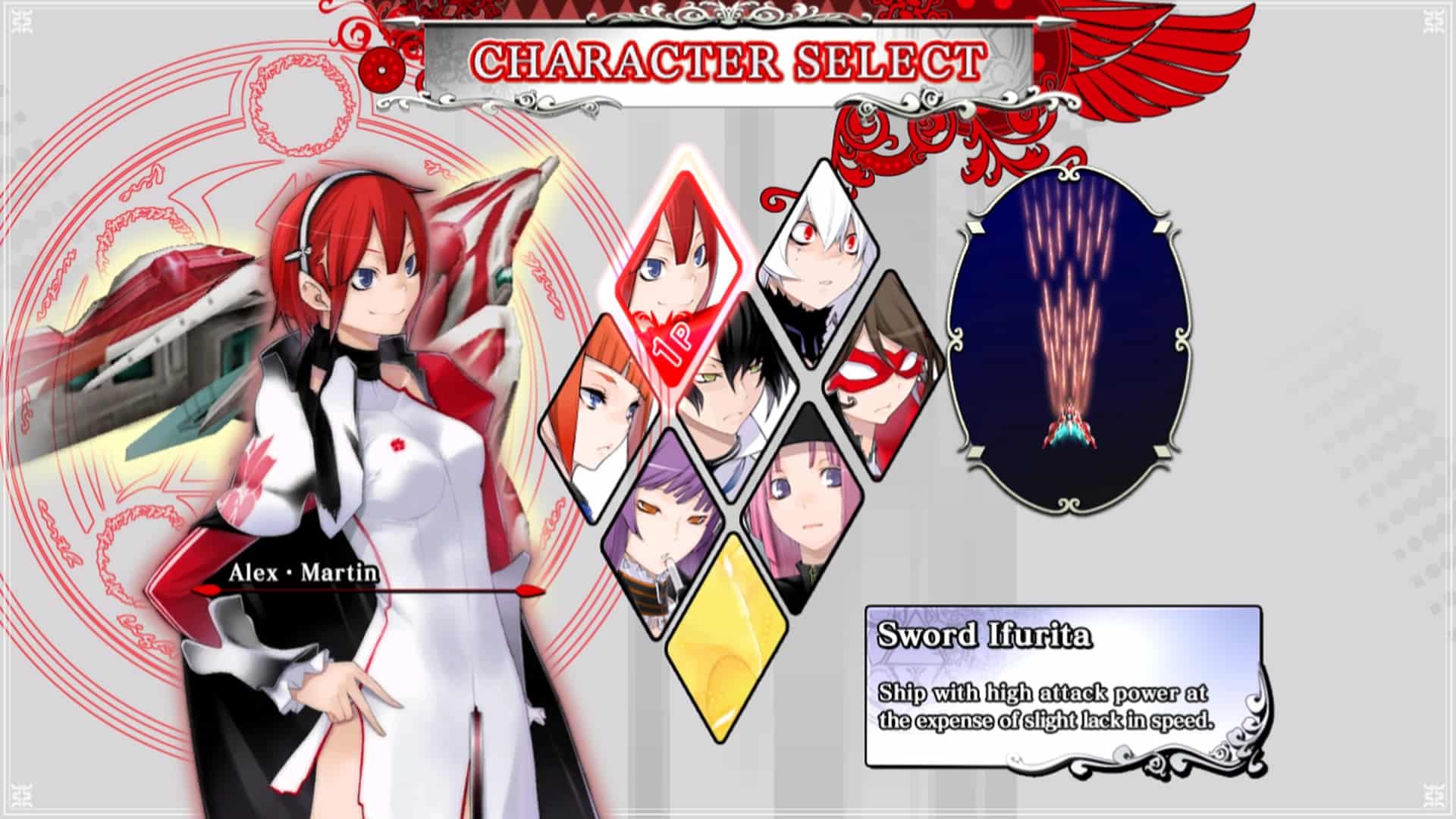 The style in Caladrius Blaze is of typical Asian style, beautiful character design with good use of colours and style and there are lots of characters to chose from too, which are quite focused at, well i don’t know but… to look SEXY but let’s talk more about that later on. 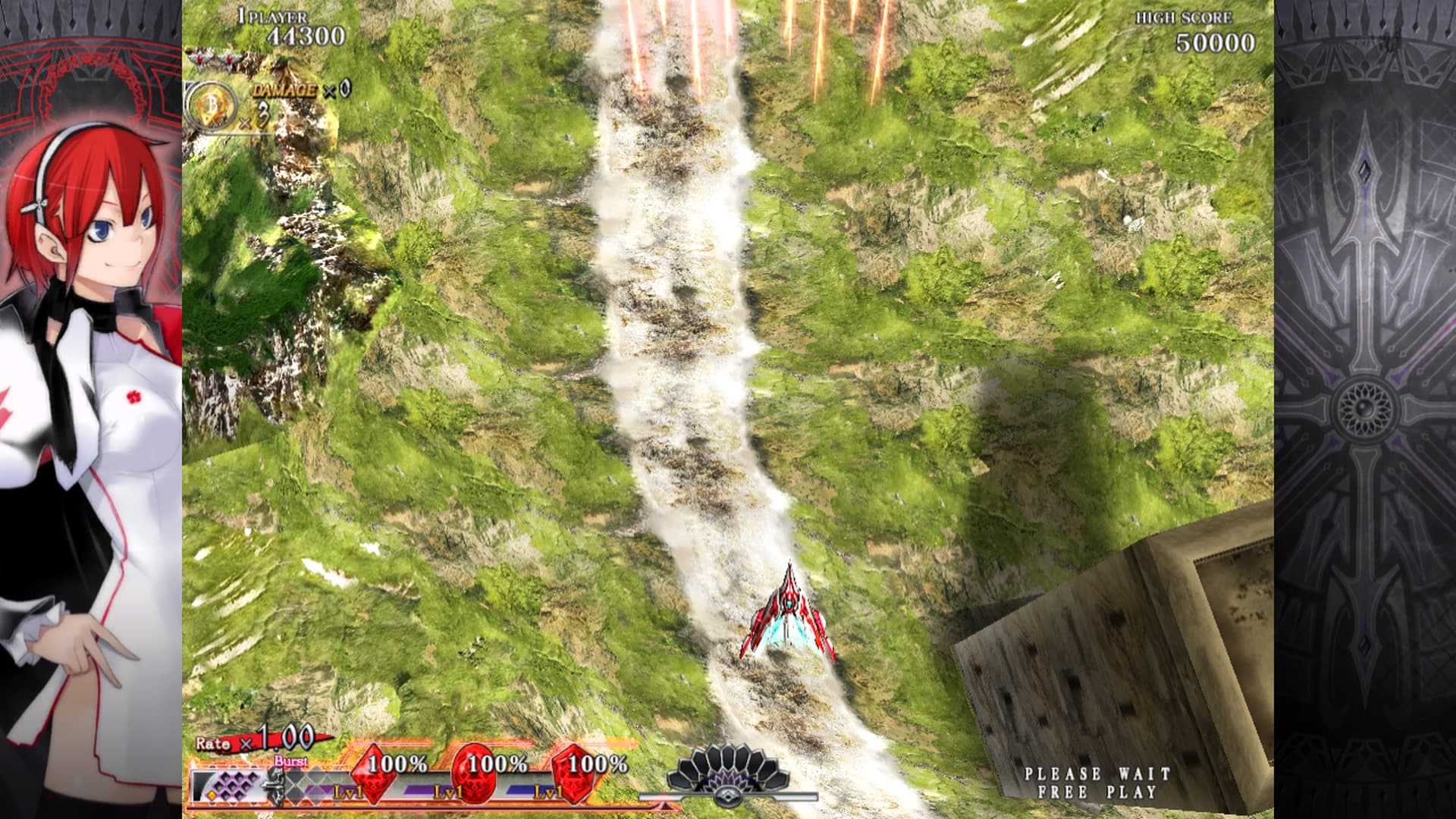 The graphics and gameplay feel very 1989 at times which is not a bad thing at all, everything is 60fps and polished in a way that makes games like Raiden V look like a turd from hell.  The game uses the typical gameplay style that came with Radiant Silver Gun (and others) which means that the backdrop is basically just a bunch of animations thrown at you.

Have no fear, the game ain’t impossible to play or master like those two because Caladrius Blaze got an easy mode where you’re more or less invincible after a certain amount of deaths/time.  The mode works great and together with the difficulty settings means that even old people like us can play the game and have fun at the same time. 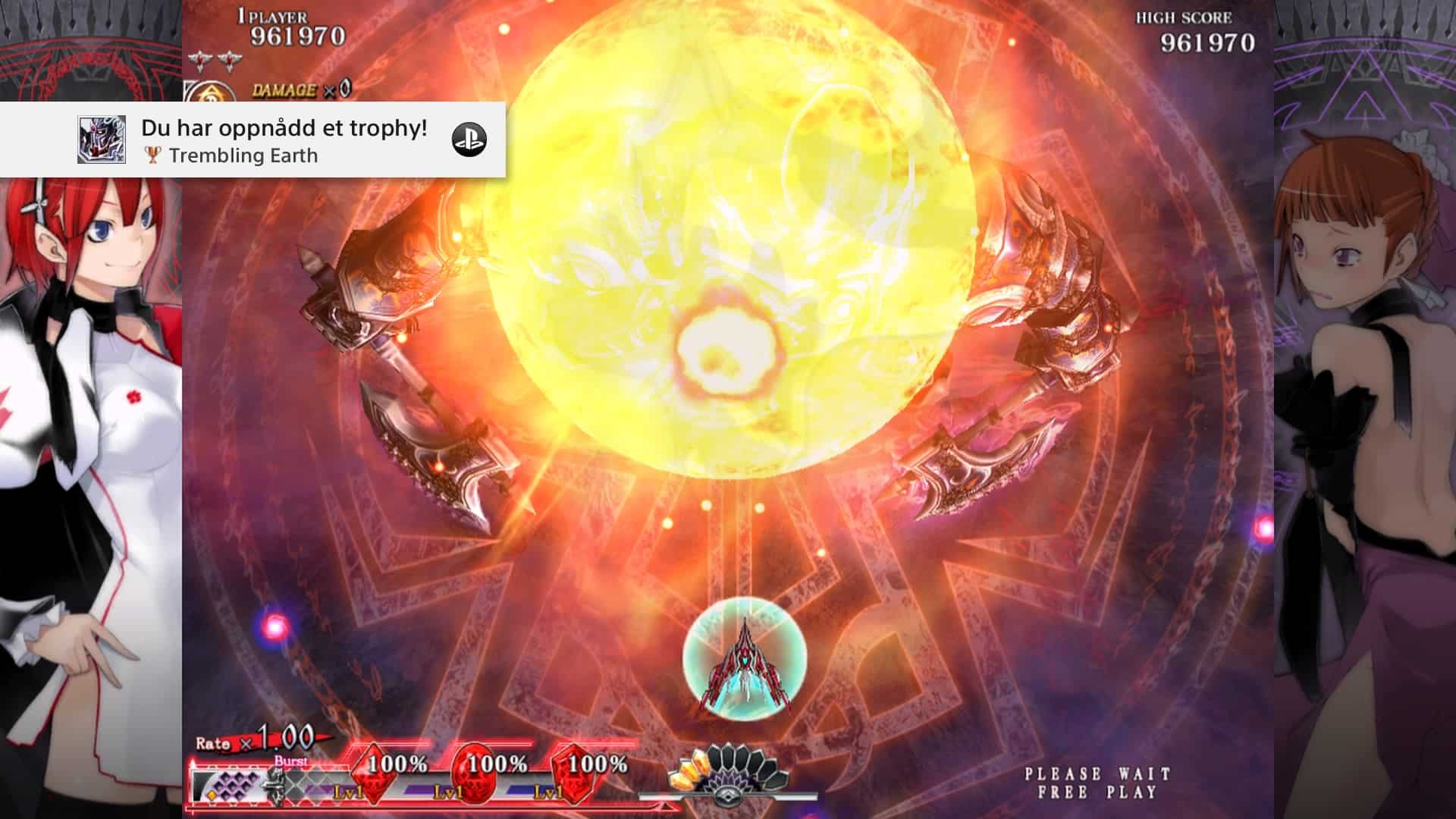 The gameplay and mechanics are pretty much standard stuff although there’s one twist that is somewhat new (not really!) for me here, boss fights are all about undressing (yes!) your enemy, the energy bar is actually a metaphor for clothes (WTF!), ONLY IN JAPAN…

The boss picture to the right, more below in the next picture. 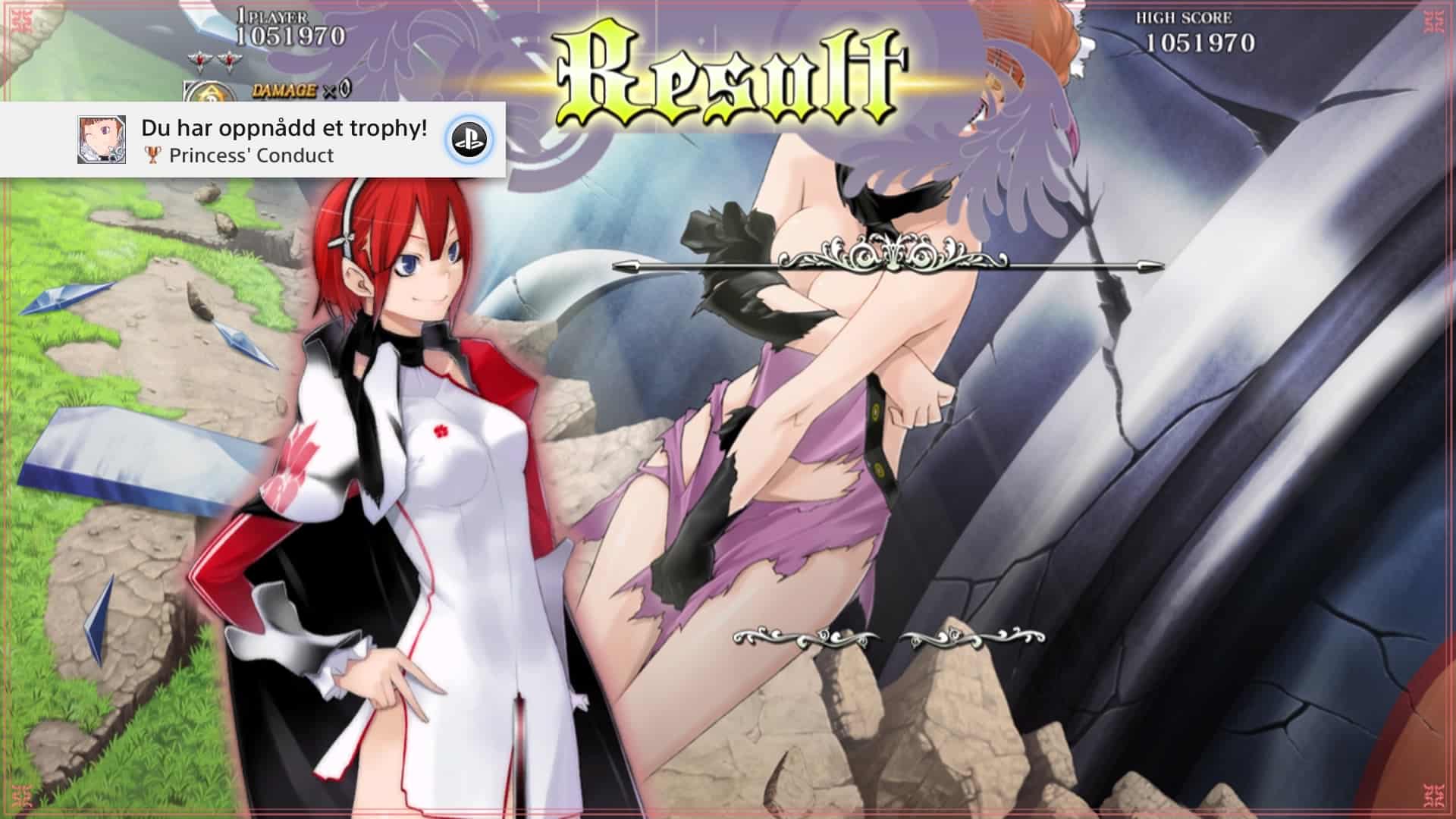 I won because i shot my enemy’s clothing off her, there are some sideboobs to be seen through the game but there’s never any (offensive) nudity or whatever to be seen (maybe :p)…

If European’s had made games like this then i am sure there would have been an insane amount of media (over)reactions and a shit load of stupid comments all over the internet, but since it’s an Asian game and an old-school shooter means that it fly straight under the radar without anyone noticing it at all. 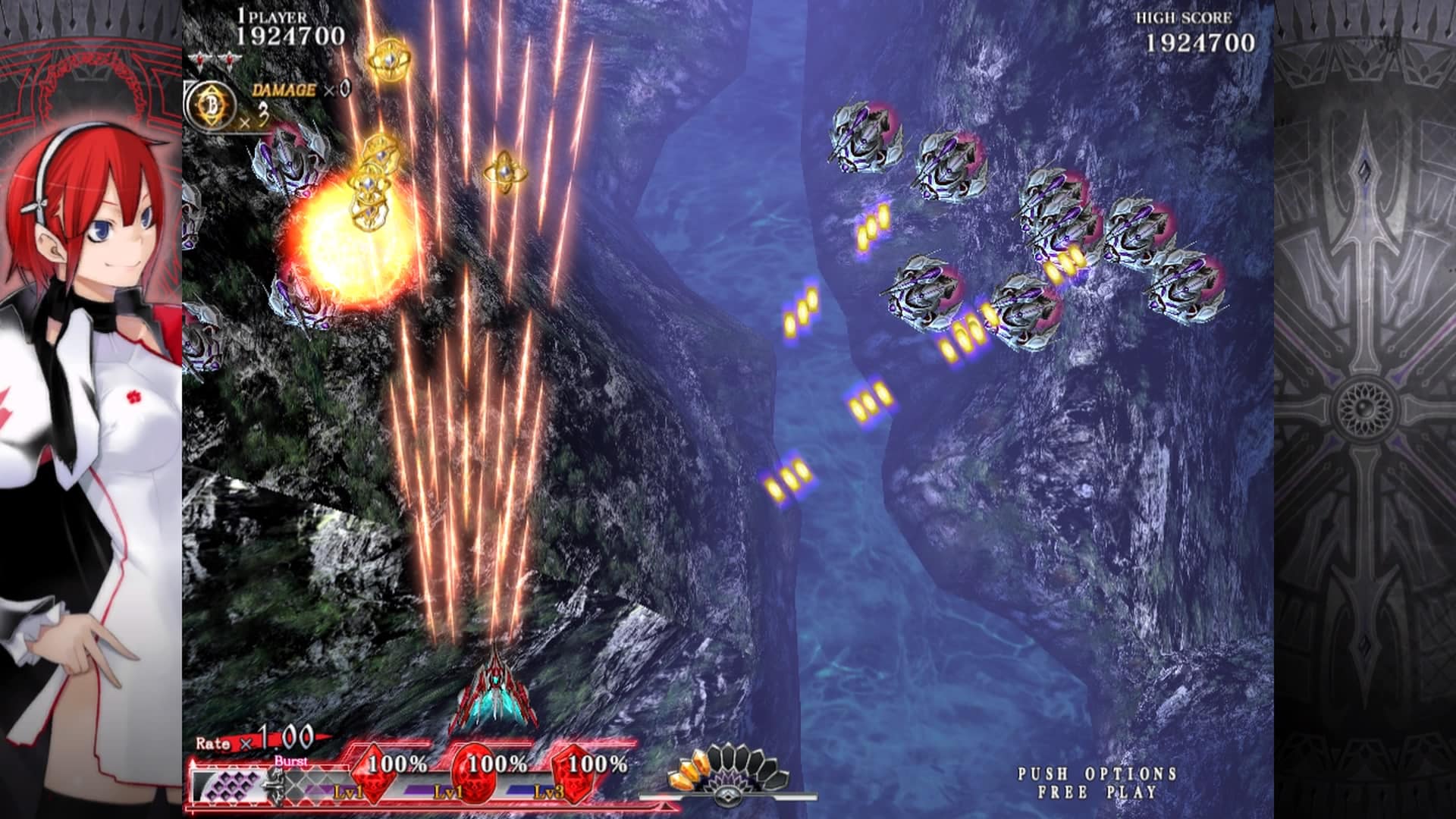 Caladrius Blaze looks and moves rather brilliantly, a proper top-down shooter with an insane amount of stuff going on and more weapons to use than you will ever figure out how to use.

The game consists of 3 main modes, original arcade version and an EX version and a mixed one, they’re almost identical to each other although there are a few new missions to be found here, that doesn’t change the game all that much in the end.

You will eventually also unlock a Boss Rush mode, i unlocked it after completing the game two times, what the goal exactly was is unknown though. 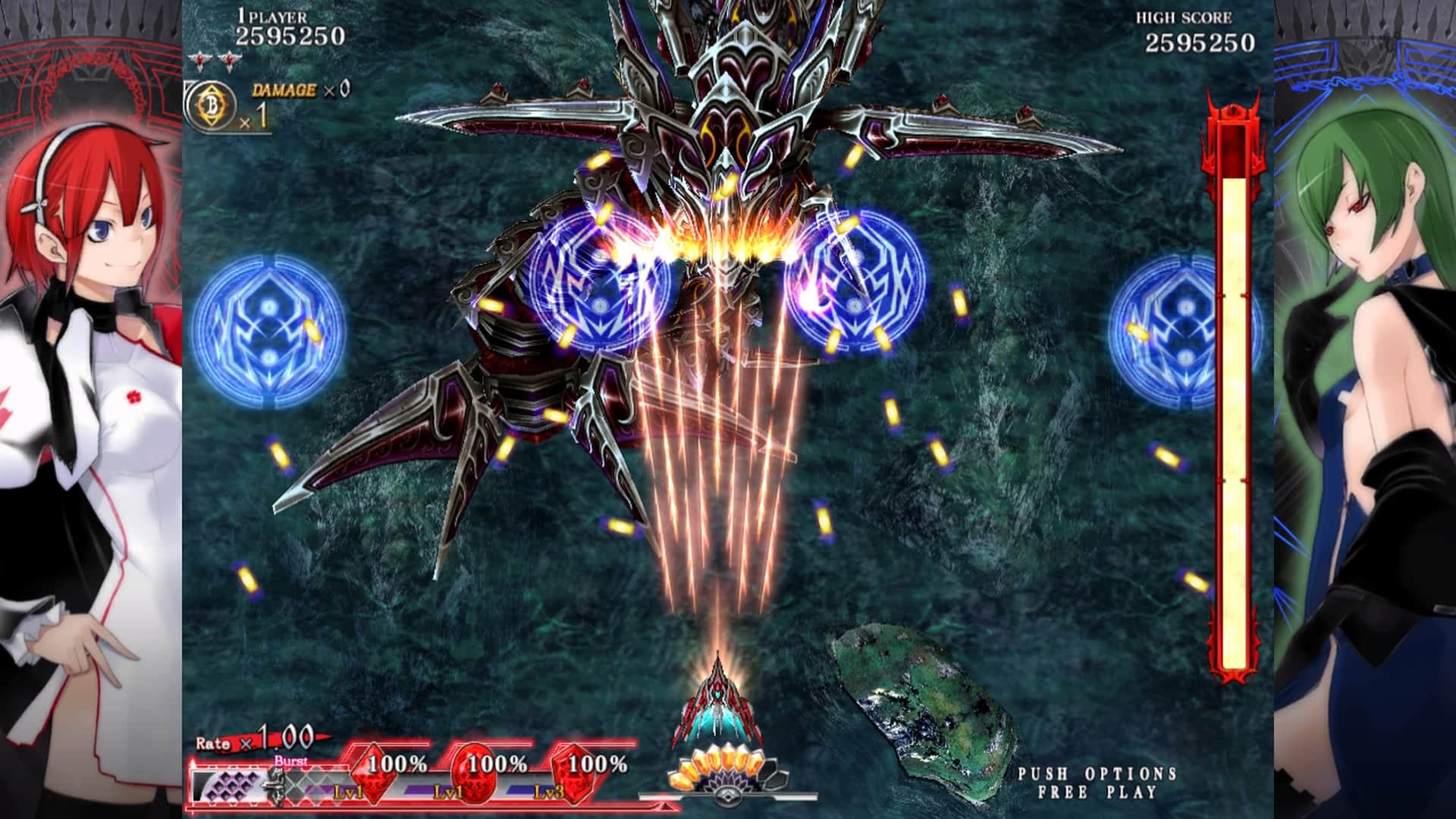 As with most shooters from the east, the boss battles screams epic and the best part with Caladrius Blaze is that no battle feels the same here.  Excellent use of colours and design, the bullets seems well spread with a pattern to it all too.

The weapon system is pretty good too, you got not only one superweapon in this game, you actually got five of them, but half of them are also so-called Elemental weapons (Circle, triangle, and square button) and finally, you got a Smart bomb thingy on R2 and something very special on L2. 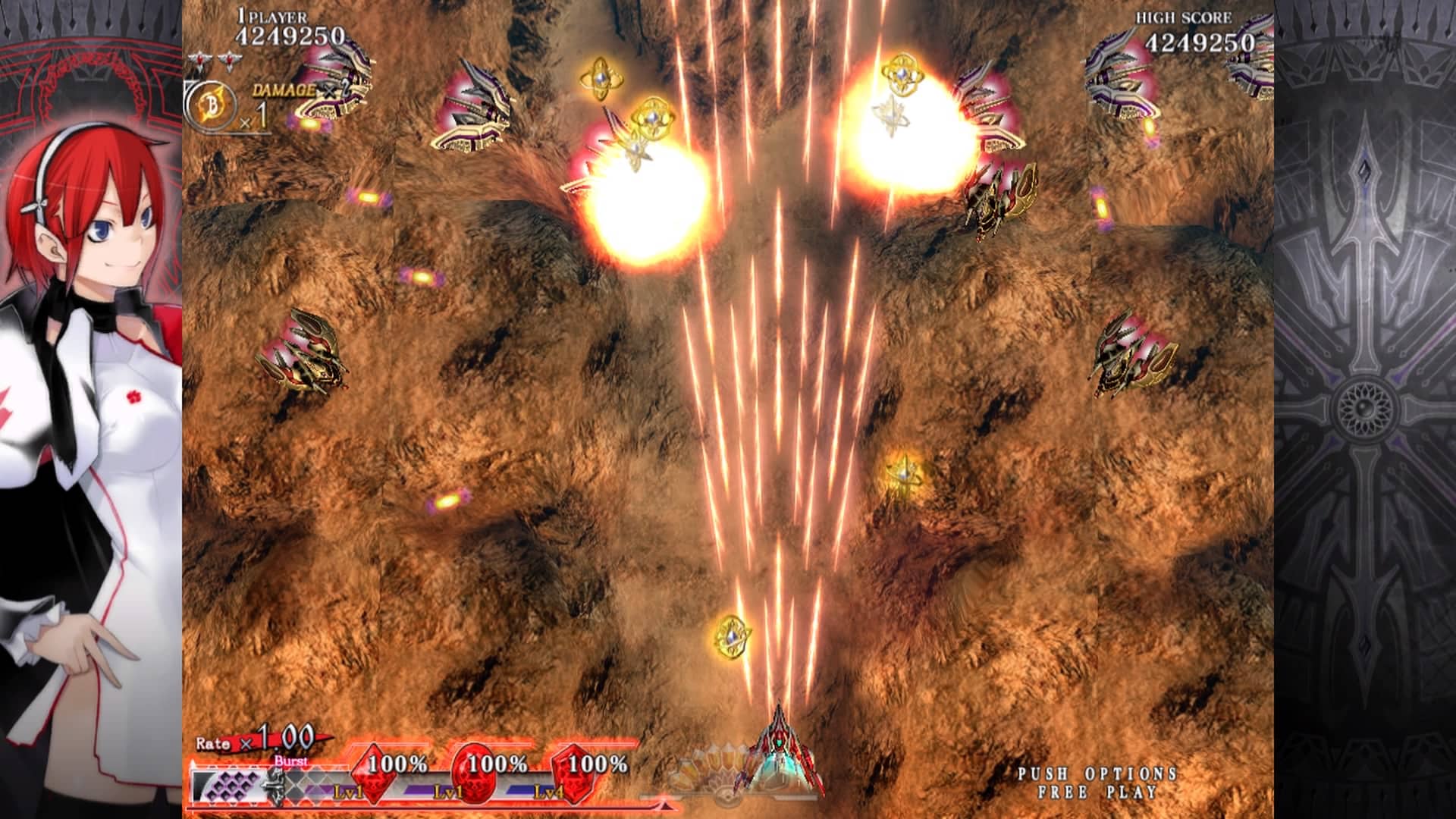 Unlike so many other shooters of late, Caladrius Blaze never feels like its work, the levels are a breeze due to the controls and graphics and sound, a proper arcade game for sure.

Everything just works and for some reason this game managed to do something Raiden V didn’t and that was to make a fun game to play, i might have had too high hopes for Raiden V indeed but my god, it was such a bore to play and with those tiny graphics and messy design just made it a drag to play. 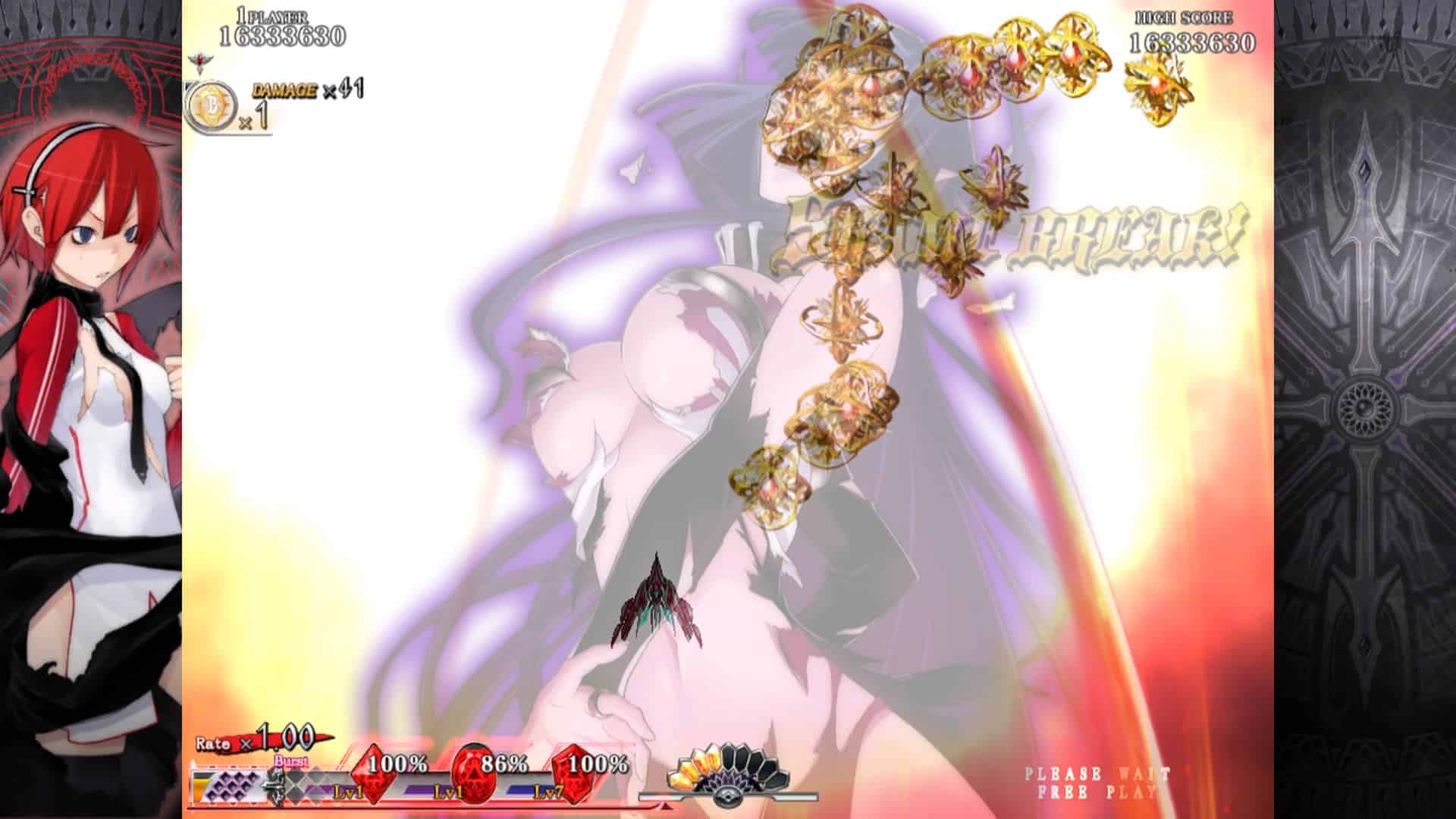 Yes, i see it too and this is why i included the picture!… BOOBS!

This was the final battle in the game and i removed a few screenshots here as i didn’t want to spoil too much of the good stuff for you guys, the final battle was pretty good alright and i must admit that things like “I wonder what she looks like naked ” never crossed my mind, i guess it’s because i ain’t 12 years and not into nude cartoons…

I like the game for what it is but i am not sure why there are nude girls in it at all. 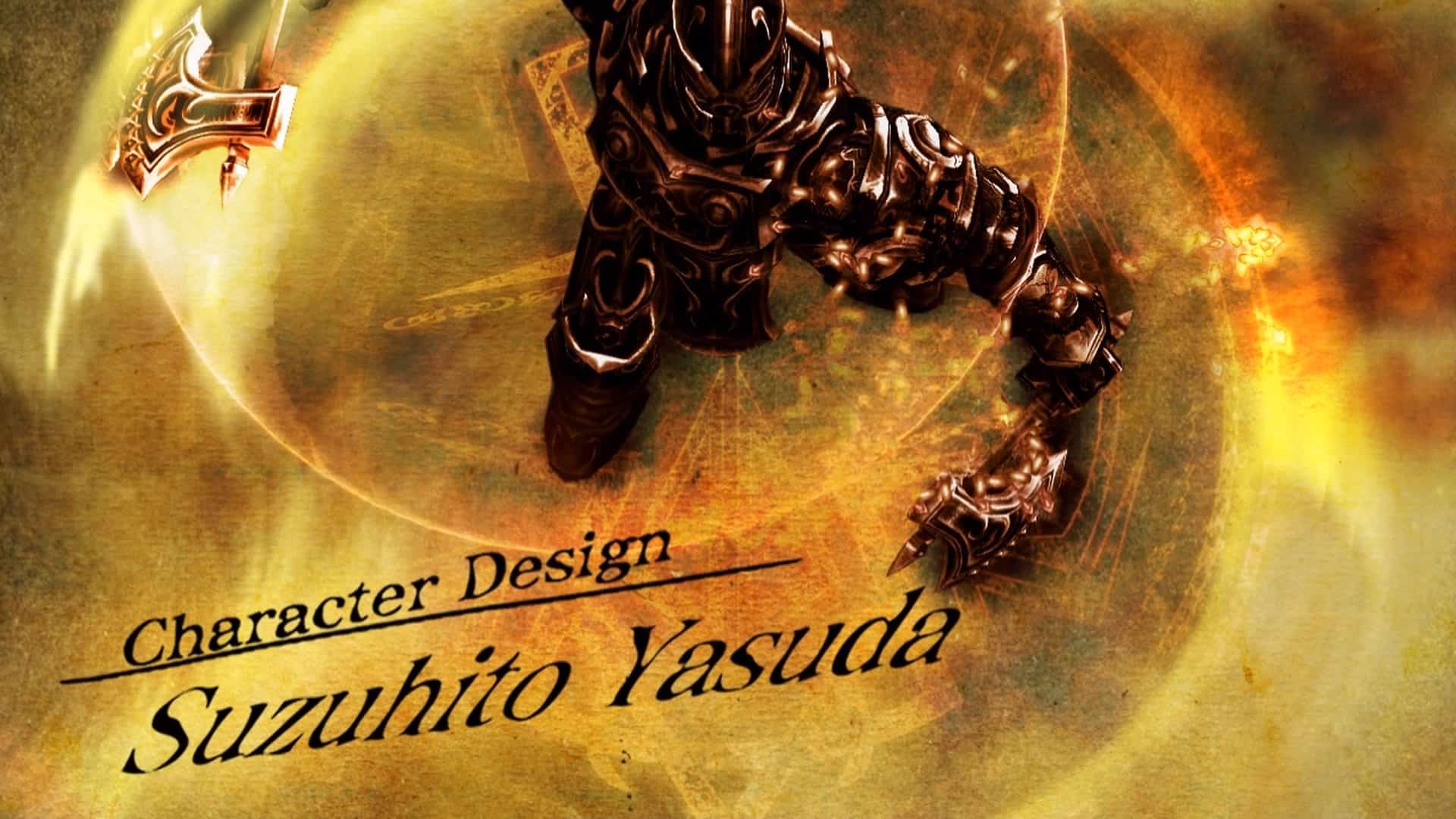 The game is quite short (one hour or so)  but there are ways to unlock more stages by doing missions and a mechanic called blocking(?) which i haven’t really figured out yet. The game is fully playable in PlayShare (online co-op) and as with most shooters from the past, co-op makes the game easier.  Caladrius Blaze is a solid vertical shooter which popped out of nowhere for me and the only reason i found it was because of a recent sale where it was dirt cheap. This is well worth your time if you’re into these types of games – Go get it now!.