The masters of the 90’s are back,  it ain’t an Amiga game this time around sadly. It’s another PlayStation 4 release although this time with a brilliant 2D sidescrolling beat em up which is reminiscent of the quality stuff Team17 did back in the Amiga days.

Team17 never made a sidescrolling beater indeed, but just about every game they made back then was of very good quality and style and this game bear that same quality feeling. 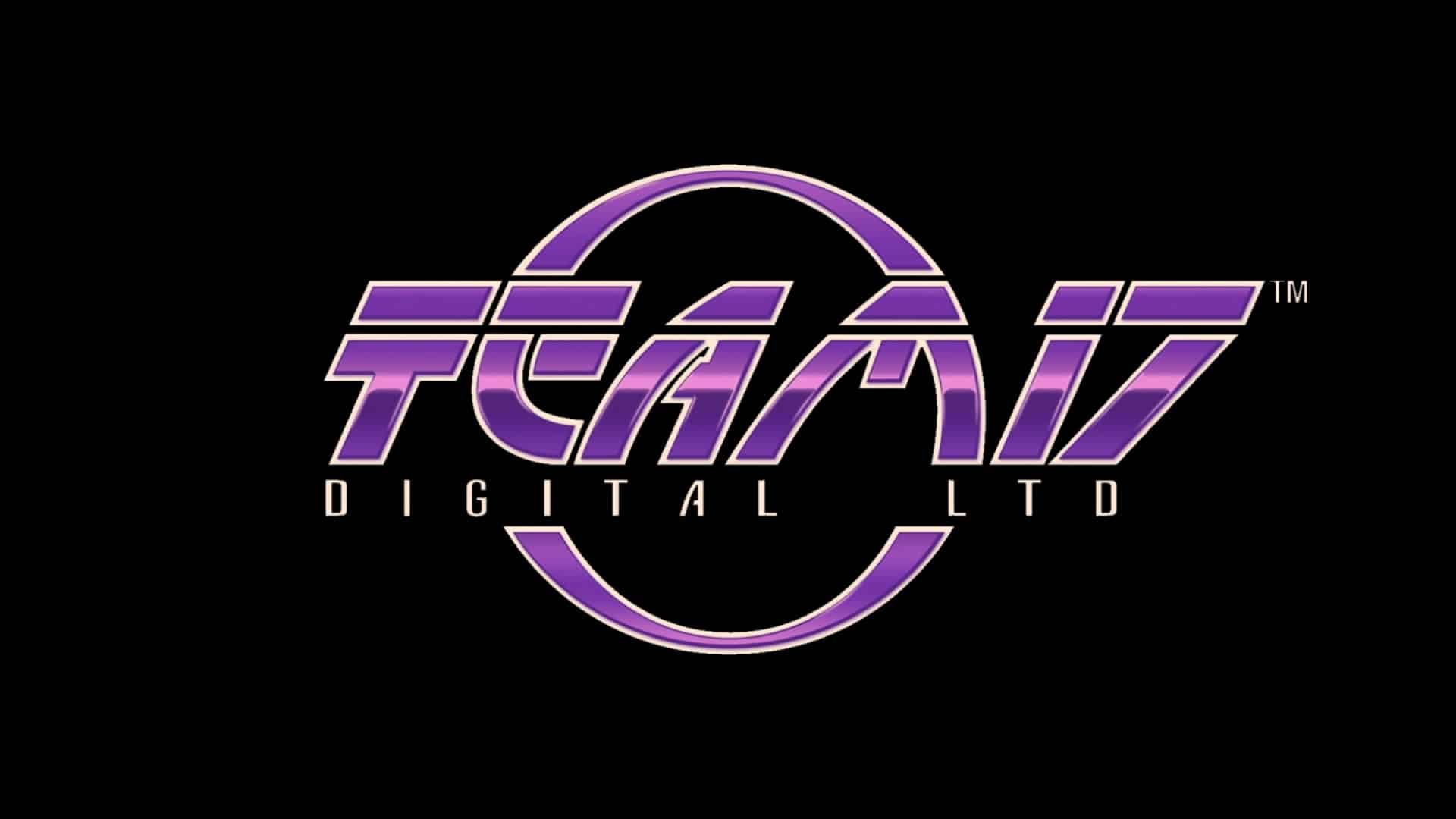 I am a huge fan of Team17 games from the Amiga days and while i did like a few of the ones from 1997 to 2017 like Worms Pinball and Project X2 but i have to admit that most of the games they made or published in the non-Amiga era never reached the quality of the past.

Did they struggle to deliver the quality? Was it just that the PSone, PC, PS2 etc required them to do new and a different style that never made them glow beyond the endless Worms games? Who knows, but it’s really sad as they have been trying really hard to be the king of the 3D consoles too.

Not everything is bad though, Superfrog HD (& here’s another link to my Superfrog HD review) was quite good at times and well worth my time, another good PS3/PSVita title was Alien Breed. 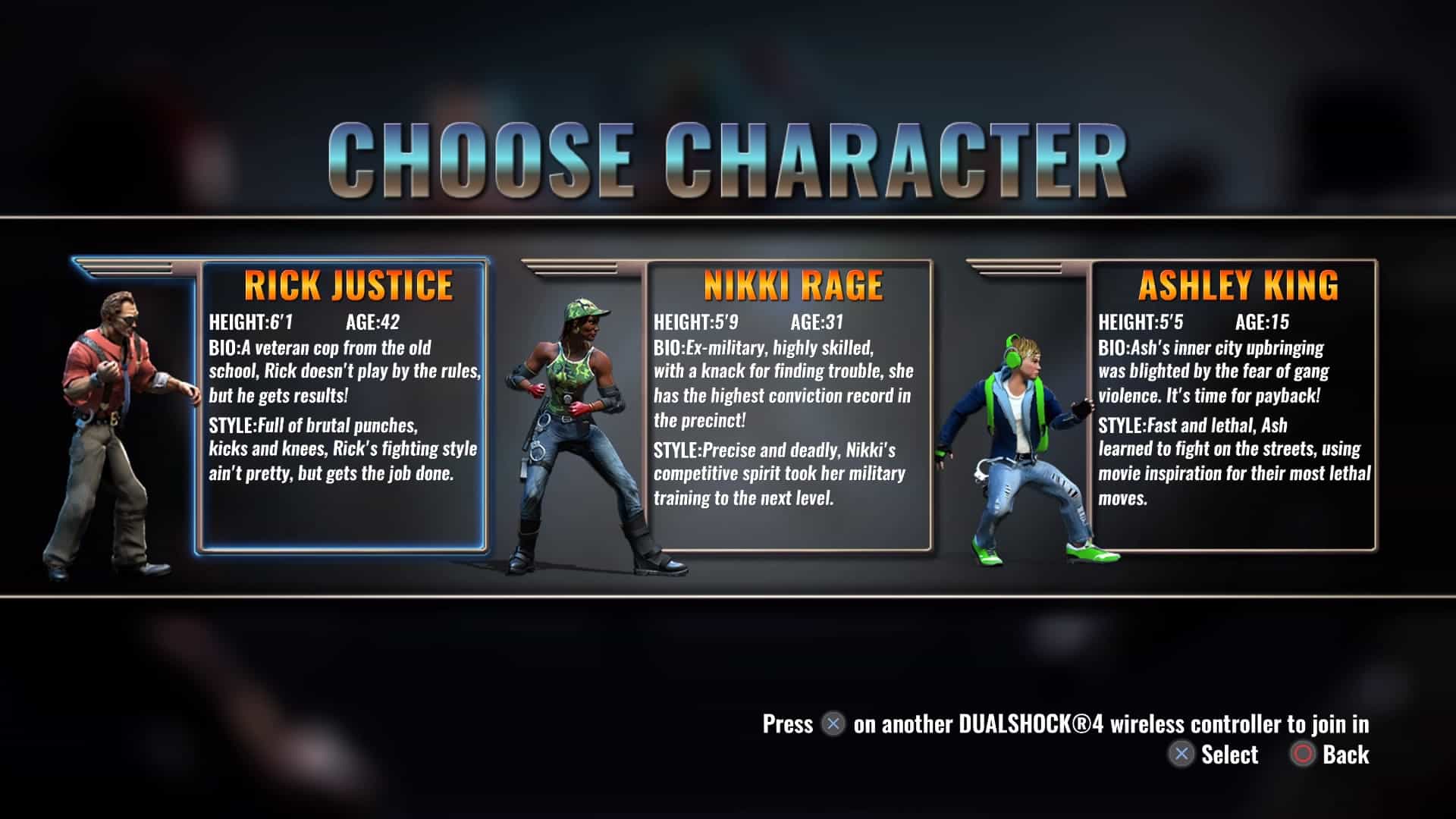 So, over to the review of what i like to call the return to the past, one of the best Team17 titles since Worms DC back in 1996, Raging Justice , a 2D Sidescrolling Brawler/Beat Em Up like Double Dragon, Final Fight, Streets Of Rage, Turtles Coin-Op and many, many more.

I know some people (Kim Justice among others) out there claim this game ain’t like them, i have absolutely no idea what the hell they are on about really, the first thing i felt while playing this game was that it felt like a sequel to Final Fight and it’s PlayStation 2 sequel Street Wise among others, and i know quite a lot of Amiga fans say the same.

Raging Justice is a 2 player Local Co-op game where you can choose from 3 different characters, for some reason the game hasn’t got an online mode and there ain’t a 3 player mode either.

The 3 characters feel a lot like a tribute to other games, the big guy Rick Justice looks almost like a photocopy of that huge lad in Final Fight.

The second one (Nikki Rage) is a girl with the most annoying scream ever, i found it funny as hell but Roar whom i played Co-op with more or less told me to either stop or he would kill me.

I and Roar played online Co-op thanks to PlaySHARE function on the PS4, no lag what so ever and as always everything went smooth, this PlayStation 4 feature never get enough credit if you ask me. 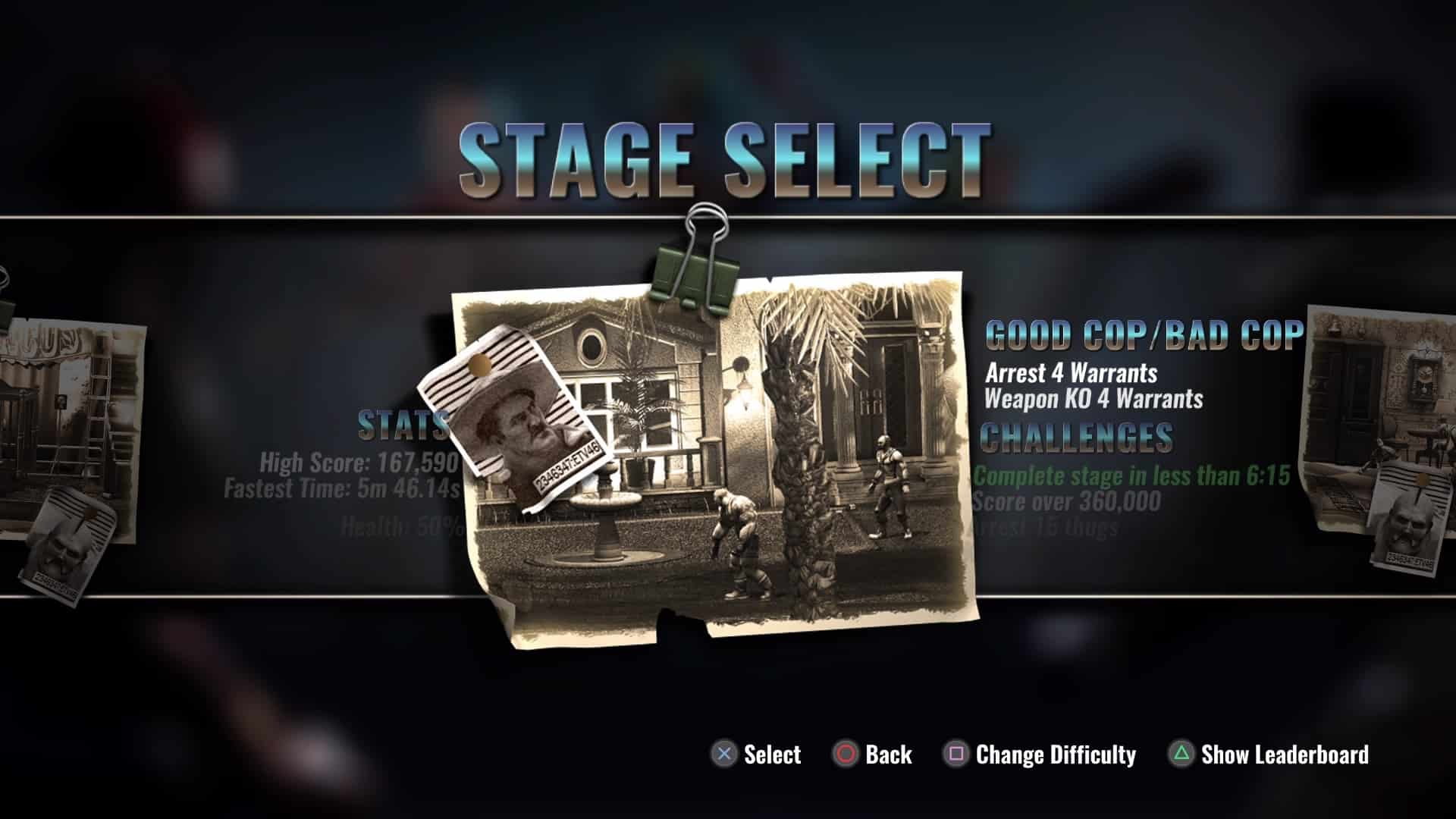 Most games back in the day was either too hard and short, or too easy and long, Raging Justice is like most hard ones and once you manage to master it, well then it ends up being a wee bit too short with its 8 levels.

With that said, it ended up much easier for two reasons, we played in co-op it and we played at Easy as we wanted to have fun and get better at the game before getting our ass kicked.

Raging Justice got a feature i must admit that i fell in love with, within every level you get lots of challenges to pull off, these will eventually rank you up towards Bad Cop or Good Cop.

There’s a unique feature in it too, arresting criminals, knock them out until they see stars and then cuff em, best of all with this feature is that it gives you a much-needed health boost.

The challenges can be everything from beating the level within a time limit to arresting bad guys, more about that later on. 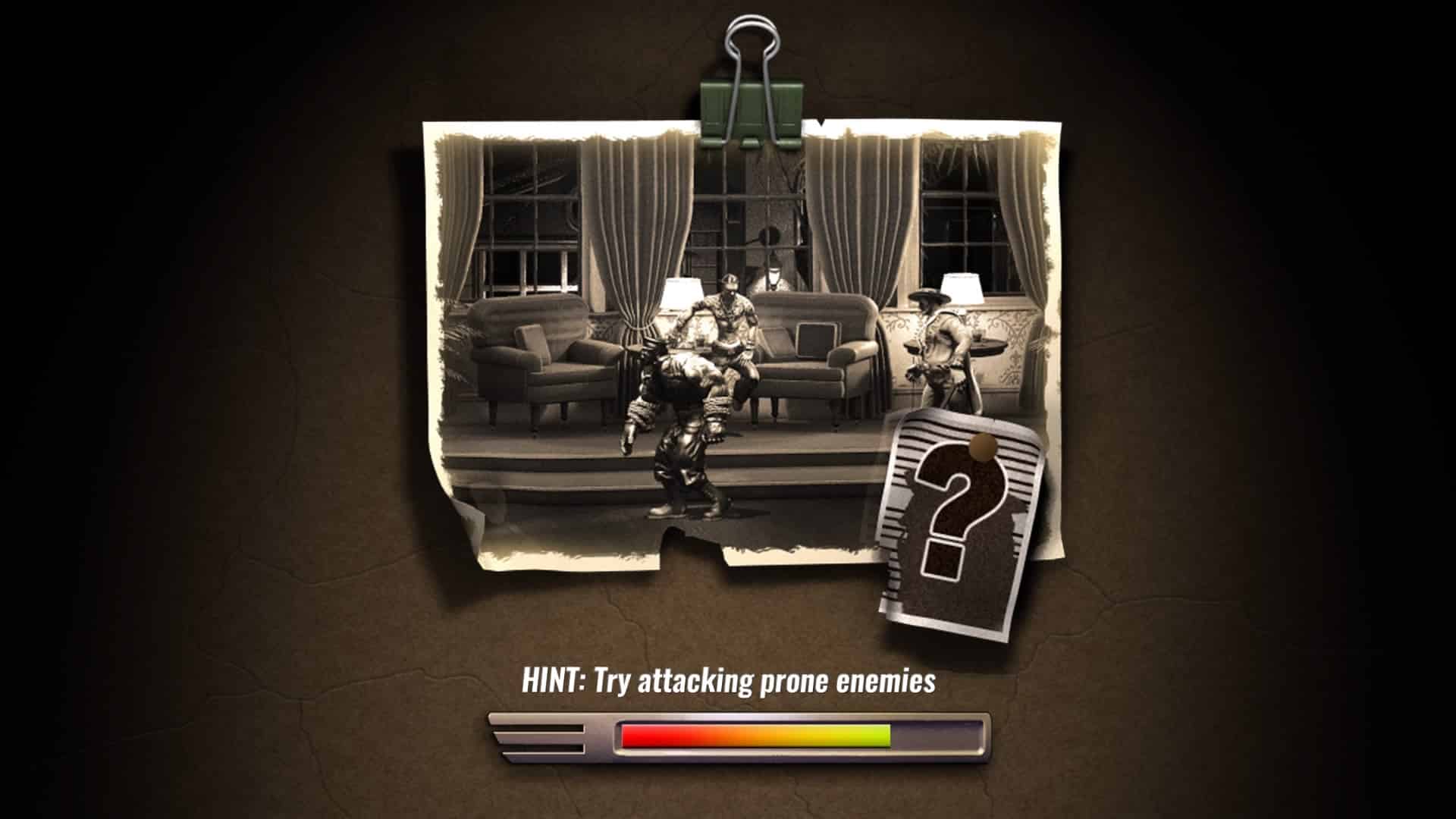 You always get hints while loading the levels, most are just silly but yes there are some good ones too if you pay no attention to your co-op partner while he instructs you what you need to do, right Roar? :p

I and my good (gaming) friend Roar completed the game over two evenings while doing so led to many hysterical moments where we ended up beating each other instead of the enemies. There’s one level in the game that had like a gazillion enemies on screen at the same time and i swear to god that we probably spent 7 (out of 9) credits on that level alone, and yes most of them was probably because of “friendly fire” and we were extremely unfocused due to laughing like crazy while hammering the buttons.

Me and Roar basically went like, no we don’t want friendly fire switched on(it can be switched off too)  in the game but in the end it is one of the best things about the game, hah, yes it might sound strange but we certainly felt it was one of the reasons for the game to be really good. 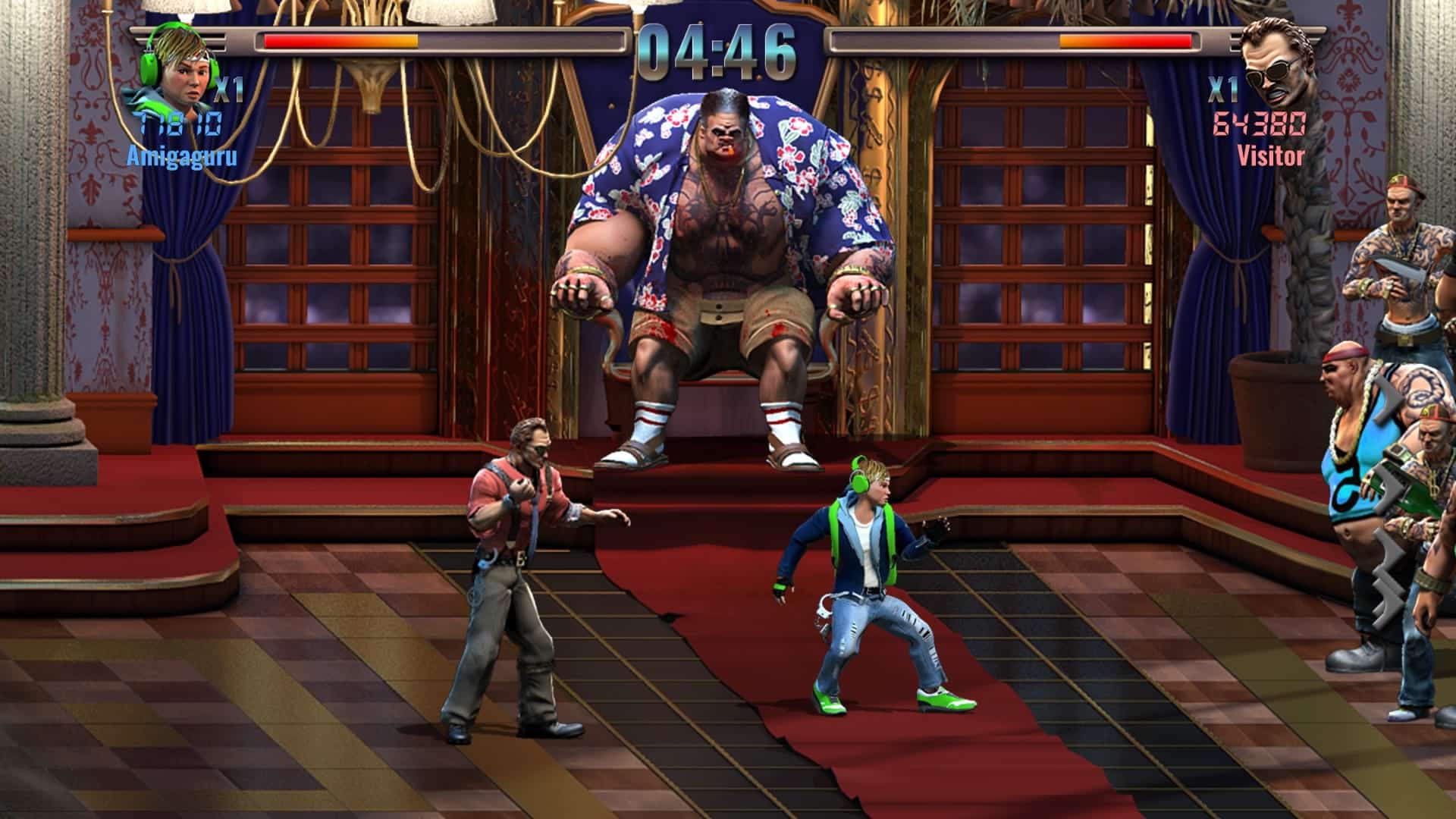 The locations in the game are quite standard in terms of how they looked like in the old days, you got the streets, the bar, the fancy house, the scrapyard and so on.  It basically delivered all i asked for except for a subway section really.

I felt that the transitions between each location were logical and never boring or whatever, there’s a story in there too but admittedly we skipped that faster than i could say dog poo in the gazebo.  Sorry but, WHY IS THERE EVEN A STORY IN THIS GAME? 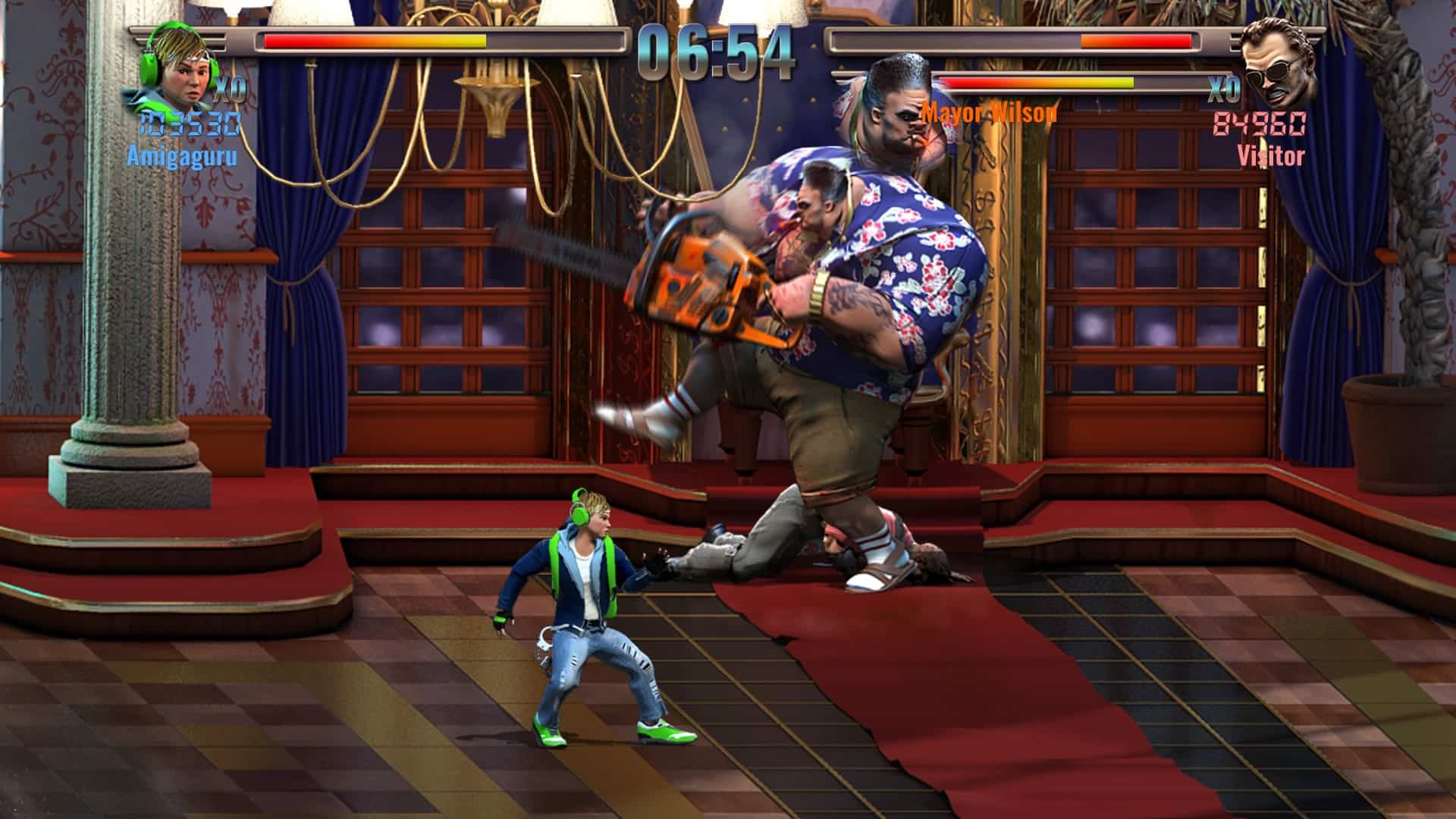 The boss fights in the game can be very hard at first, but as soon as you figure them out and work with your co-op partner then it becomes much easier and not annoying or whatever.

Bosses come in various incarnations and they’re varied enough to be enjoyable, we went like “OH THAT’S COOL”  and so on when we met them the first time.

Most bosses and minibosses recycle throughout the game, you kind of unlock them in a boss fight and then, later on, they turn up as minibosses or whatever. 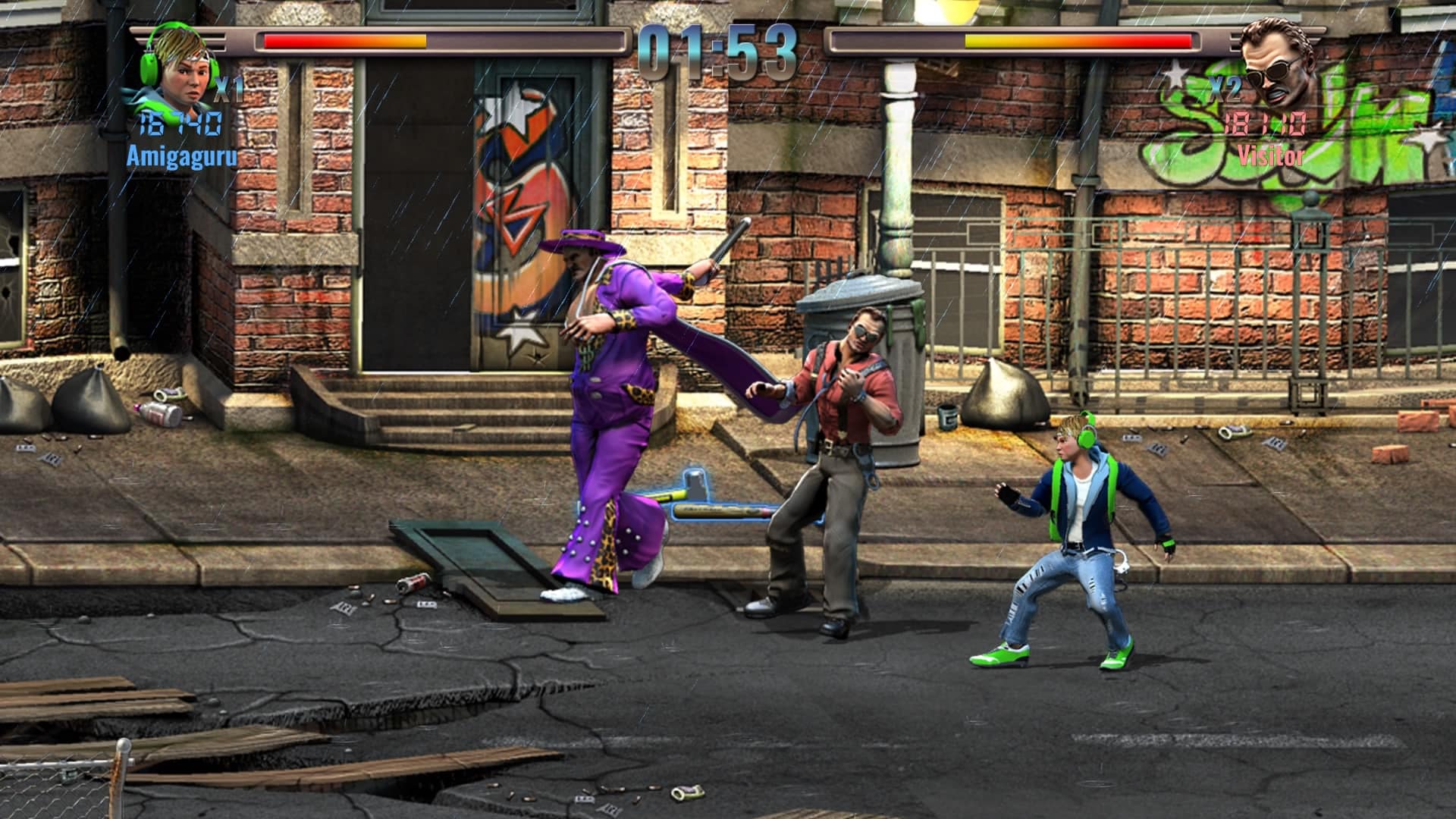 This boss has to be the most annoying one in the game, especially in single player due to him calling in reinforcements all the bloody time, and once he does then you can’t hit him so you end up taking forever to kill him.

It’s much easier in Co-op though, especially with weapon pickups… more about those later on. 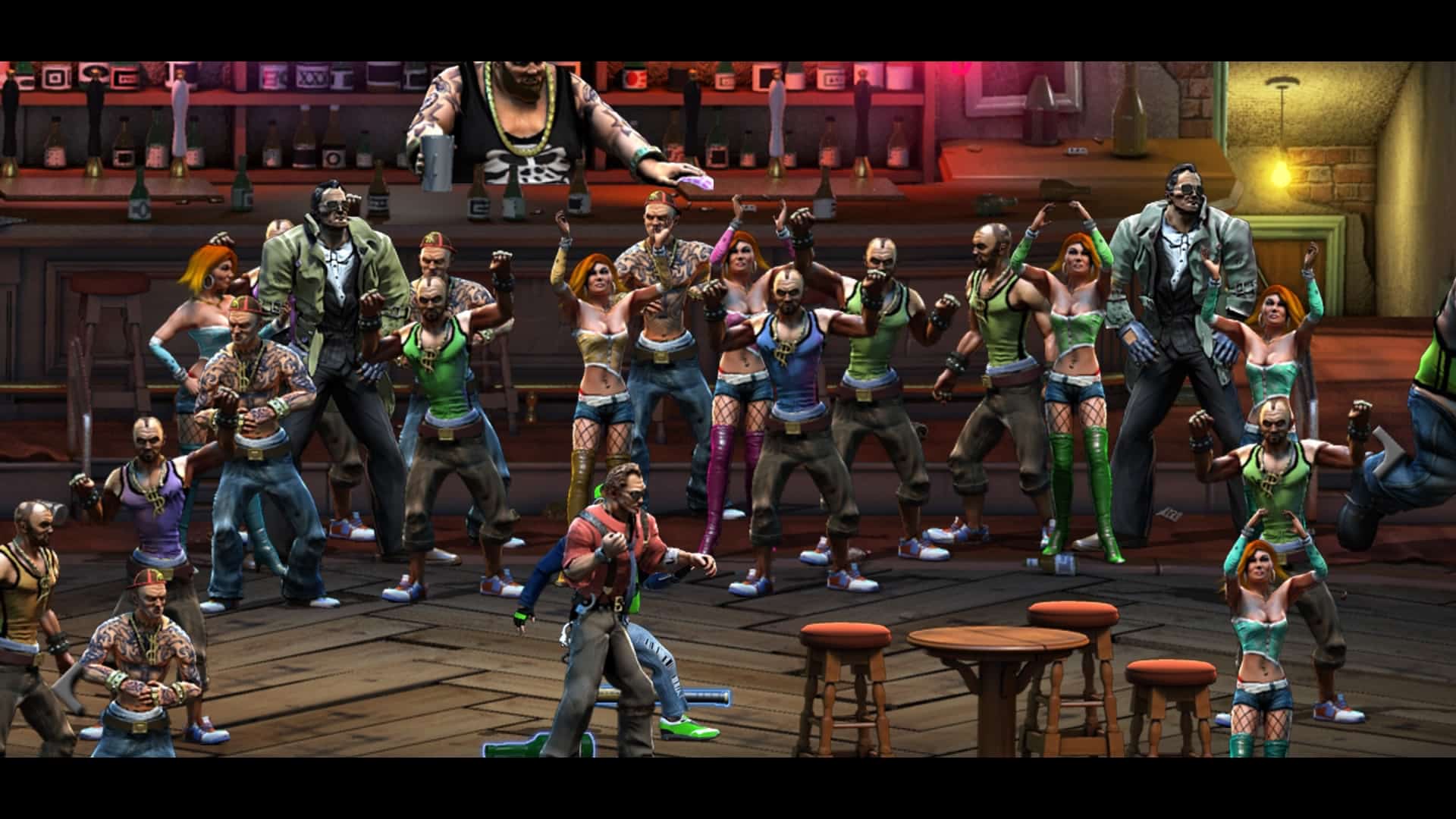 This place was nothing short of hysterical and this is the place i mentioned earlier in the review, amazing amount of enemies and tons of weapon picks up meant that this was probably the best part of the whole game.

One would think that such a bar fight would end up as a mess and freaking horrible, but everything just worked, everything felt planned and while chaotic it still never pissed me off. 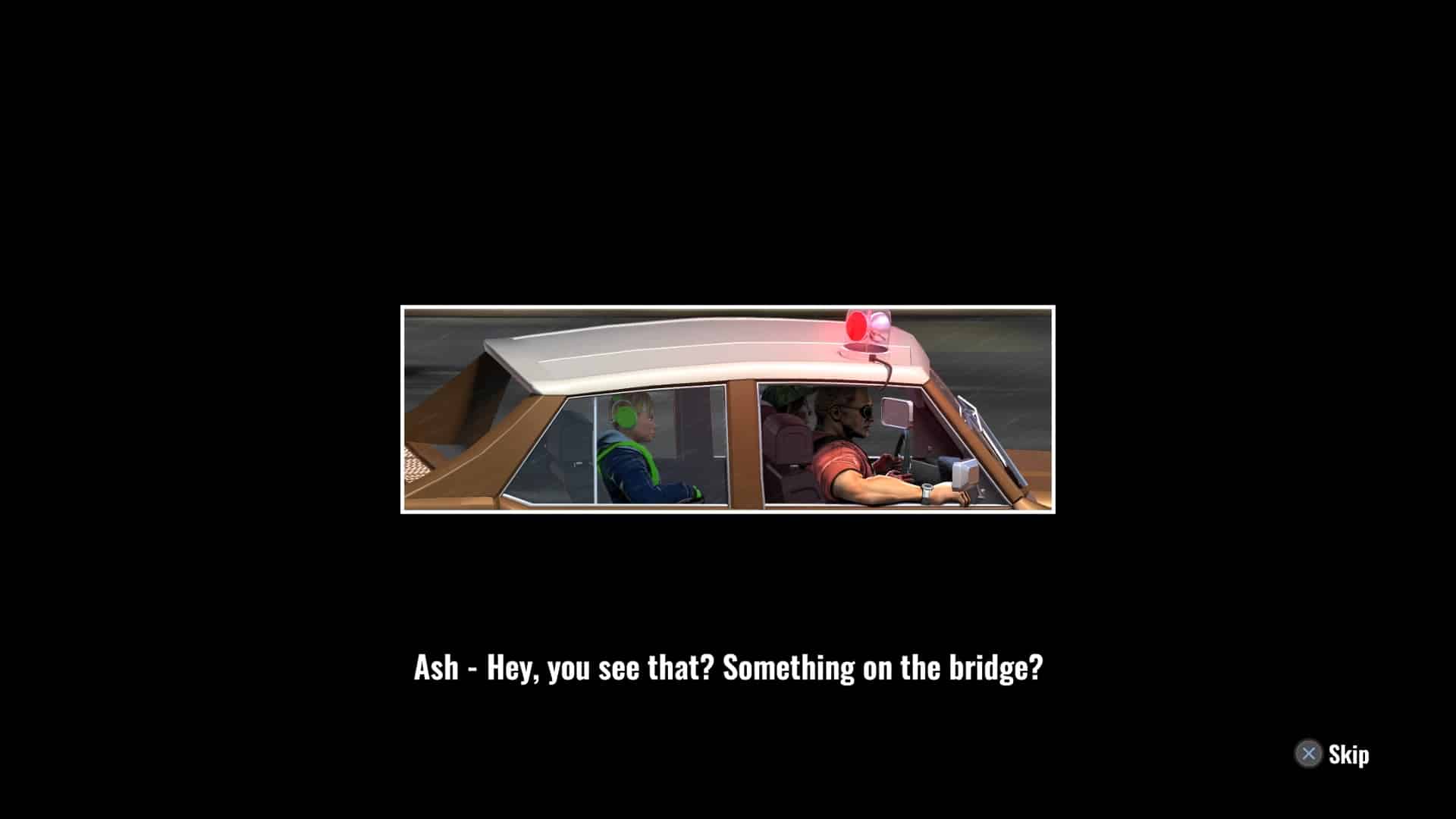 This is the first part of the game, a neat intro with that boring story, it works well although i have no idea what the hell its on about as i just looked at the animation and art.

Sorry, but i feel that stories in games like this ain’t needed at all, especially later in the game when everything is just text boxes.

And with this funny picture ends another review.

Raging Justice might be too hard for a lot of people out there but try it in Co-Op and you will change that opinion rather quickly. The graphics in the game is beautiful, the sound fx works good but the music left a bit to be desired. The fighting works good and there are quite a few moves in here that we haven’t seen in games since the early 90’s. Raging Justice is another MUST HAVE game for all the fans of the genre out there.  Go grab it now, you won’t regret that.

Imagine if this was a real title, that would have set the Amiga world on fire for sure.

5 thoughts on “Team17 Returns with a Rage In Raging Justice”