I’ve always been a diligent student, so my parents never complained if I was spending too much time in front of my Commodore 128. After all, it actually was the mid-’80s and I was attending a tech school to get a diploma in computer science. Other kids were not as lucky since it is indeed a fact that loads and loads of parents saw computers (being them a game machine or not) like demonic devices responsible for taking their kids away from homework. Well, those parents should have studied a little bit of history themselves, so they would have learned that it all started on big mainframes in the best universities. Zork, for example, saw the light between 1977 and 1979 on a DEC PDP-10 computer. Its coders were members of the MIT Dynamic Modelling Group and some of them, some time later, went on to found Infocom, possibly the highest expression of those good old times and their amazing text adventures.

Also, the very first text adventure game we know about happens to be Colossal Cave Adventure (aka ADVENT), coded in 1976 by a spelunking enthusiast (Will Crowther) who, by the way, was at the time employed at BBN, a technology company involved in the making of ARPANET. As you may know, ARPANET was an early packet-switching network, and the first one to implement the TCP/IP protocol suite. Eventually, those two technologies evolved to become the foundations of the Intenet. So, my point is, how do you like that, Mama? Is this enough homework for you? 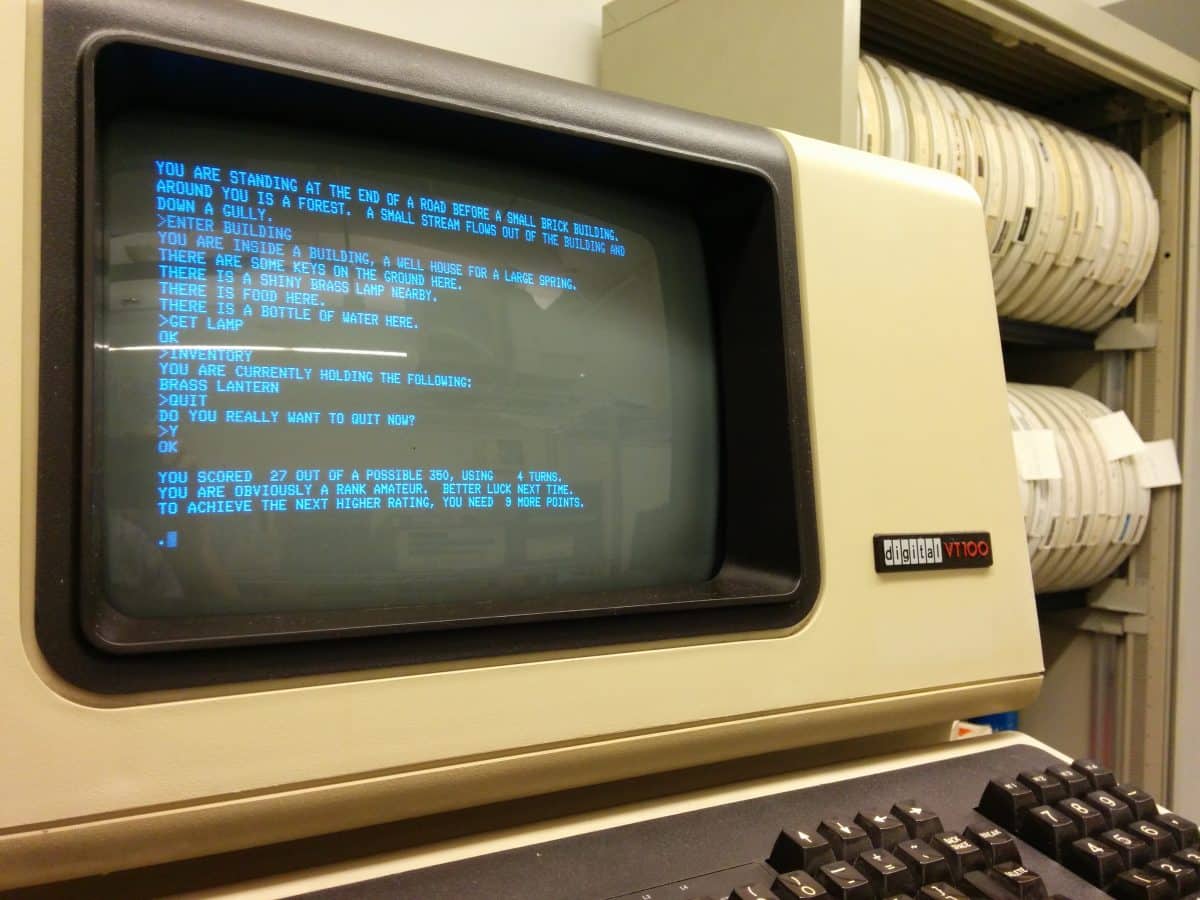 Historical notes aside, this game is my second entry in the section “My Amiga Milestones” and, like Leather Goddesses of Phobos, it’s a game I finally manage to complete only a few weeks ago. The reason why I decided to go back in time with such a peculiar game genre like text adventures is because they really set up standards which, although in a very different form, are a reference point even nowadays.

The Amiga version of Zork came out in 1986, followed right after by the other two chapters of the trilogy which, at that time, was already complete. Unlike the first text adventures, Zork distinguished itself as a very rich and sophisticated game: the storytelling part was sustained by a very high-quality narrative; the level of irony was always on the spot, giving the player the feeling of interacting with a (fairly) real “dungeon master“, like the one you could find playing the board game “Dungeons and Dragons” for real; finally, its text parser was not limited to the simple verb-noun commands (“kill thief”), but recognized some prepositions and conjunctions like “kill the thief with the nasty knife” or “get all but garlic and lamp”. 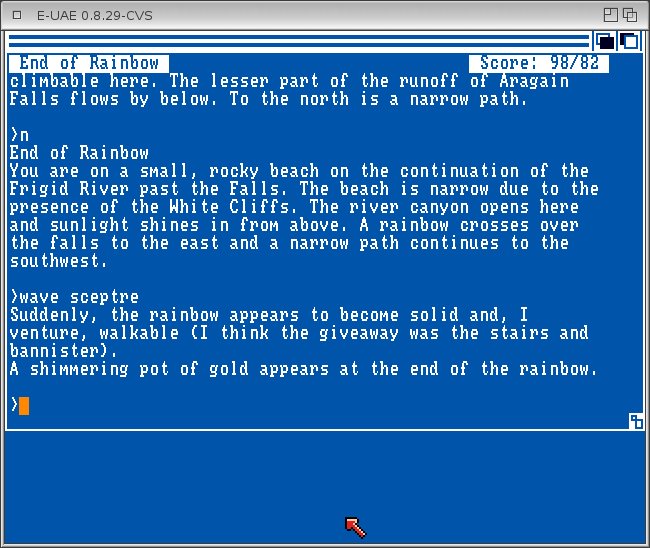 This advanced text parser was a joy to play with, and it was a real driver during my IT studies about symbolic languages and compilers, to the point that I wrote a game engine and parser myself to develop and play some simple games.

Anyway, Zork is set in a fictional underground world that the player have to explore retrieving treasures, while avoiding to be killed by weird creatures. The interesting part is that all the games of the series (and possibly even other Zork’s inspired/related Infocom games) share many core details, like the grues (light-fearing dungeon-lurking creatures), zorkmids (the local currency) and so on. By the time the game was published for the Amiga it already had a well established fan base, which produced manuals and maps, like the awesome ones you see depicted in the gallery below. 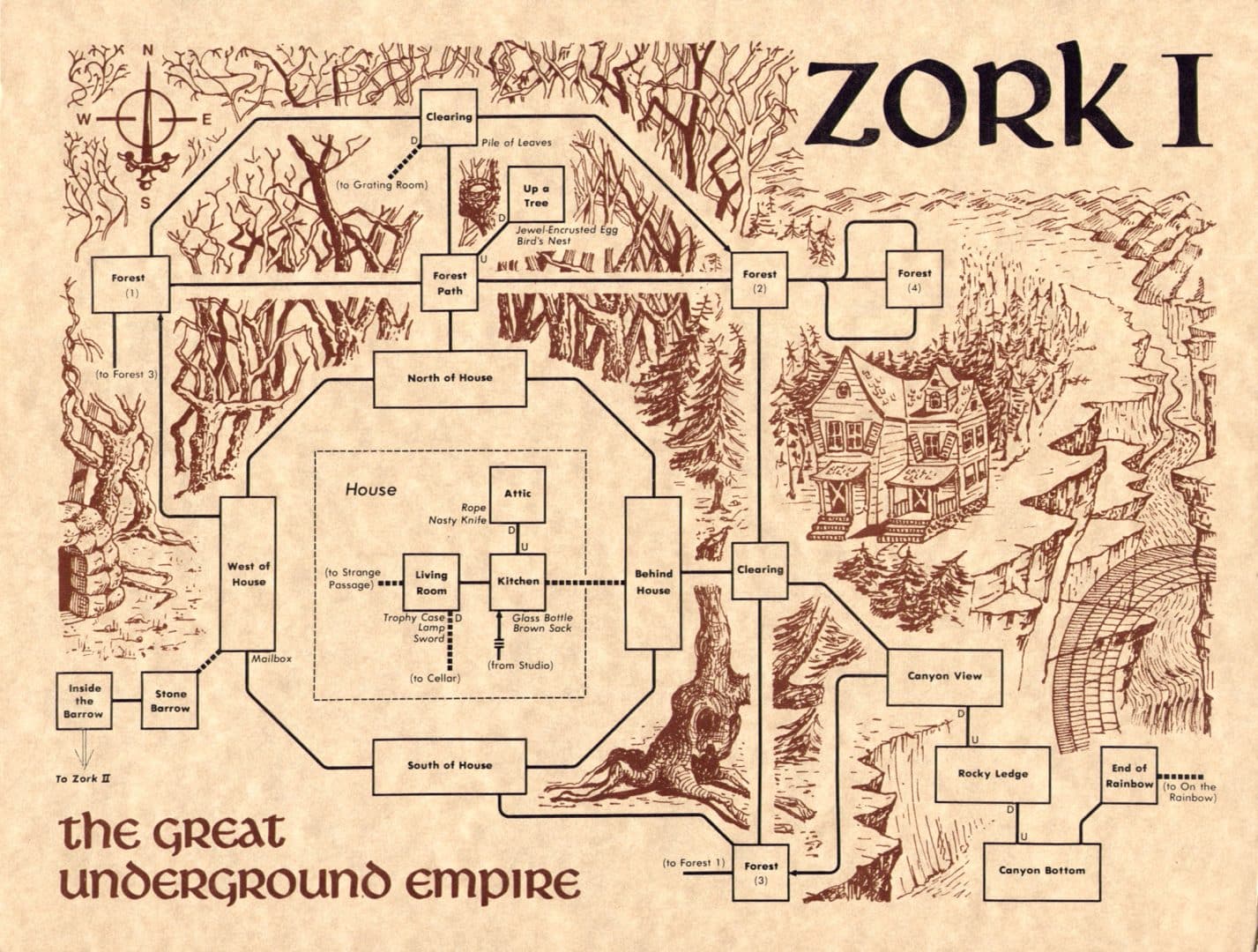 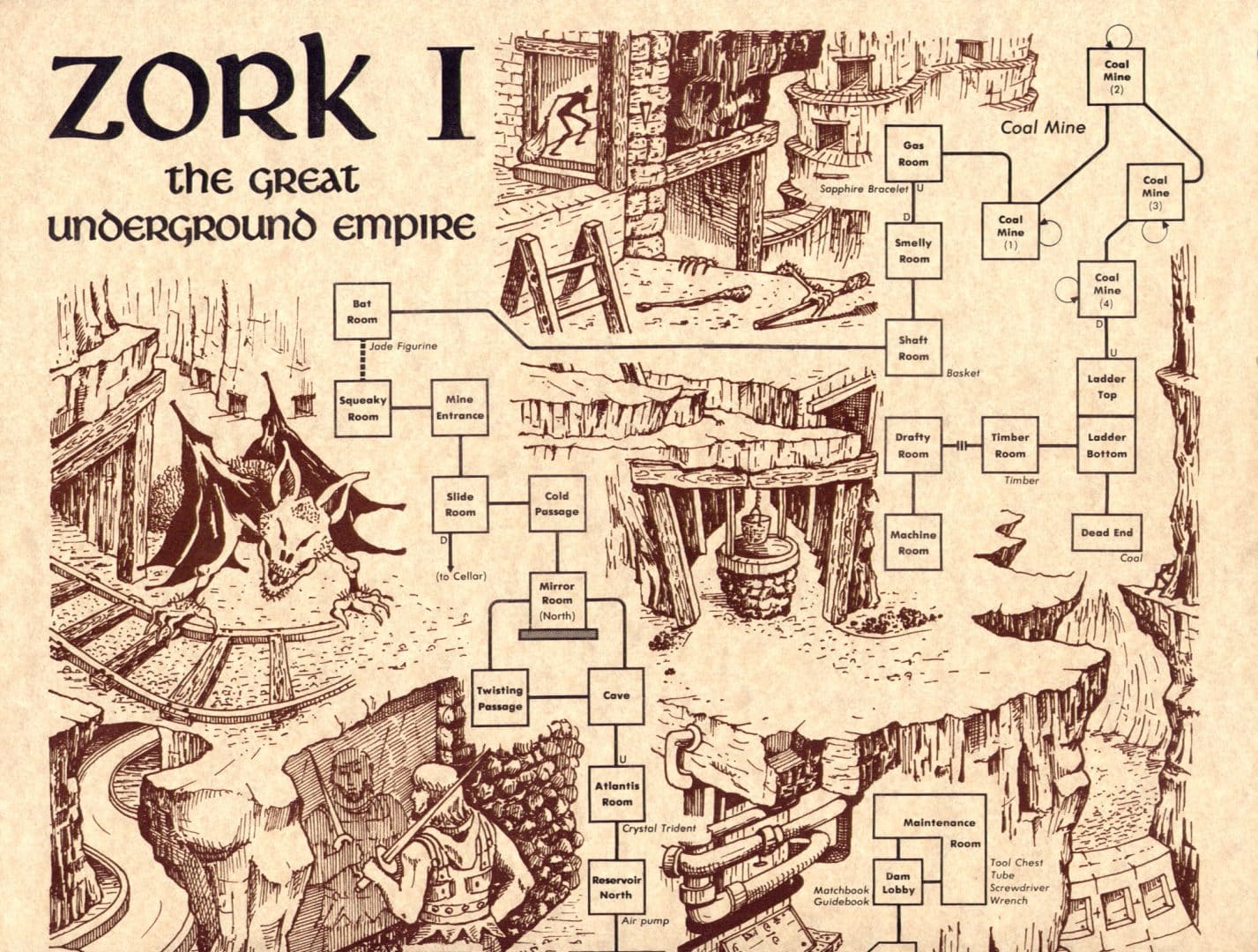 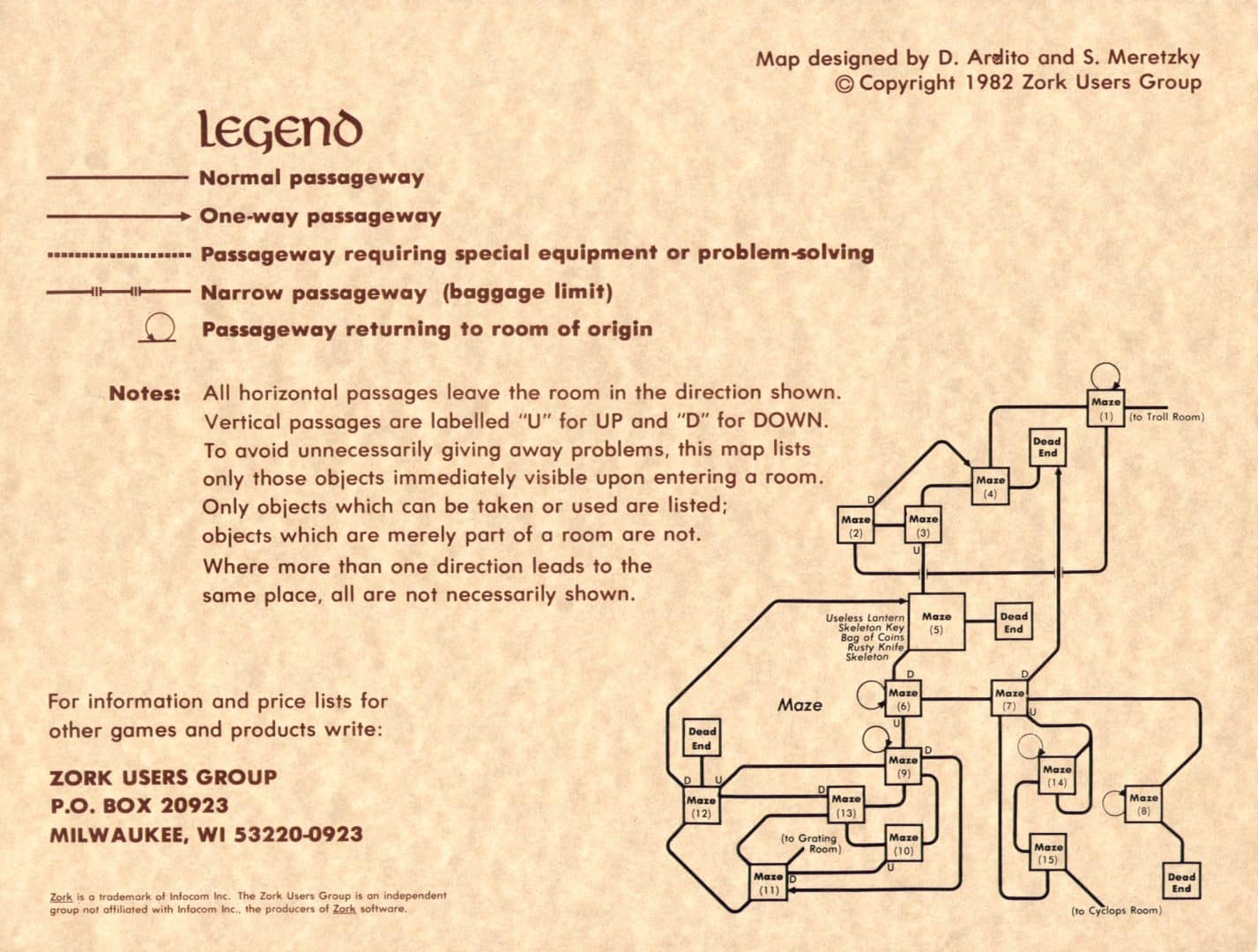 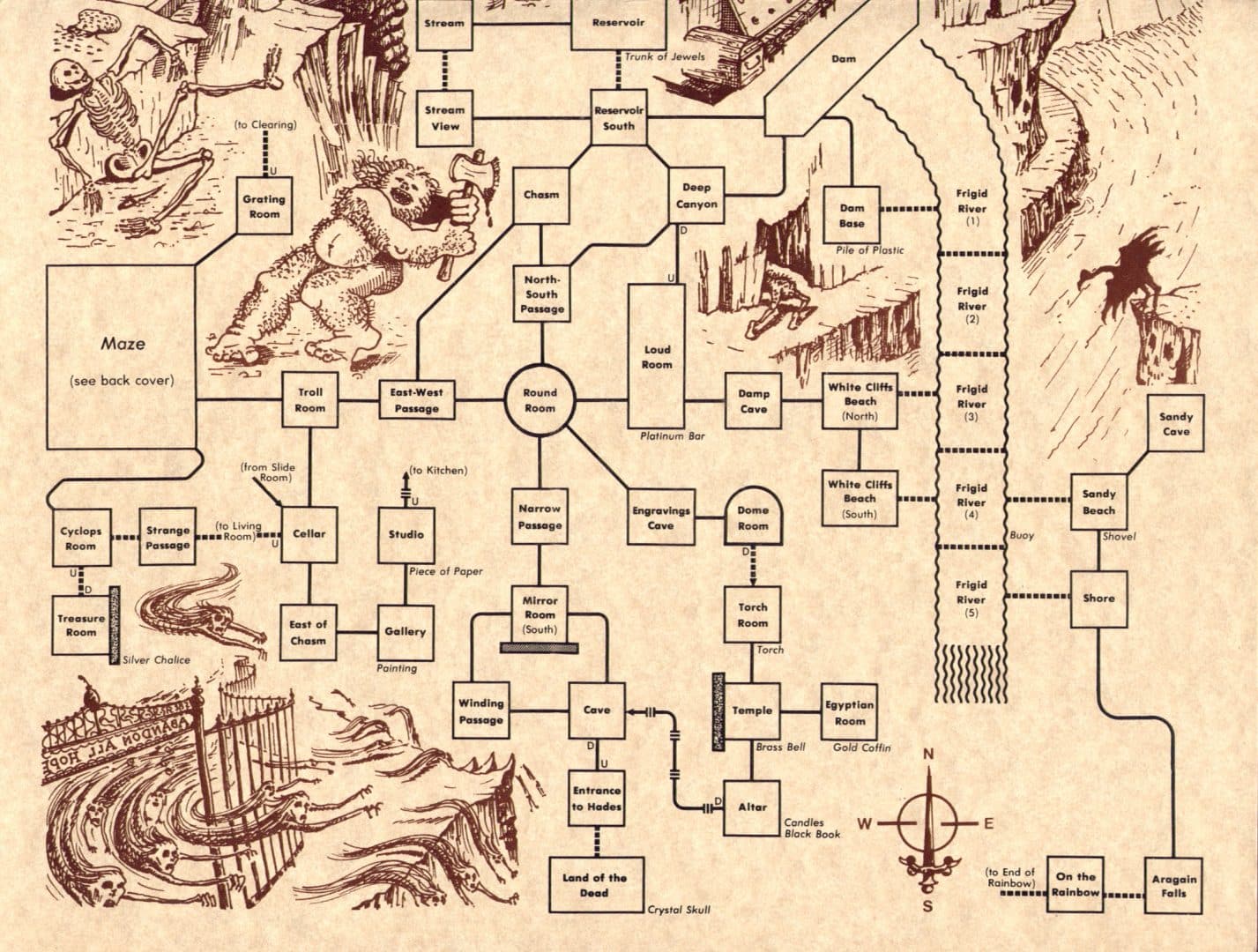 It’s clear as the sun, if you are an old adventurer, its relationship with the already mentioned “Dungeon and Dragons” saga and its beautifully illustrated manuals. The game was extremely well received by the critics and public, ending up in selling a considerable amount of copies (over 680k across 1986) and generating sequels and prequels. 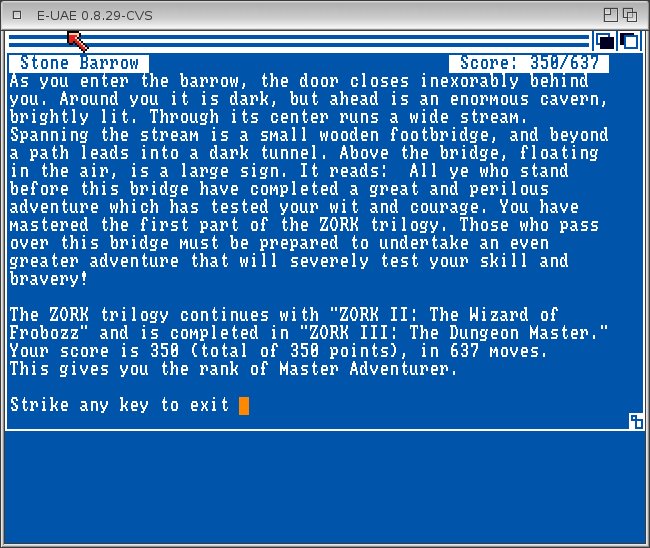 Despite being a trilogy (the last location of each game takes you directly inside the following one), the first installment is probably the one players love the most, so for the time being there won’t be any other Zork-related articles in this section. Anyway, before moving to other game genres, there is at least one more text adventure I’d like to cover: the utterly brilliant Steve Meretzky’s A Mind Forever Voyaging.