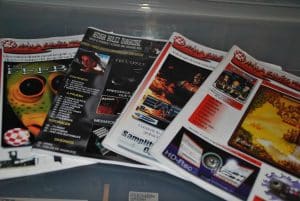 This is the second part of the very popular post from yesterday, in this post i will write about 3 other magazines from the same era.

Amiga Rulez Magazine was a Spanish magazine which was only available in very limited numbers, and after a few issues, the magazine went quiet.

It was said that it would be resurrected but as far as i know, this never happened.

I personally know one of the guys behind the magazine and this is why i got the released issues as he sent them to me when they came out as a gift to me and my collector mania.

I can’t read or talk a word Spanish but it was still a cool present and they’re good to have in my collection. 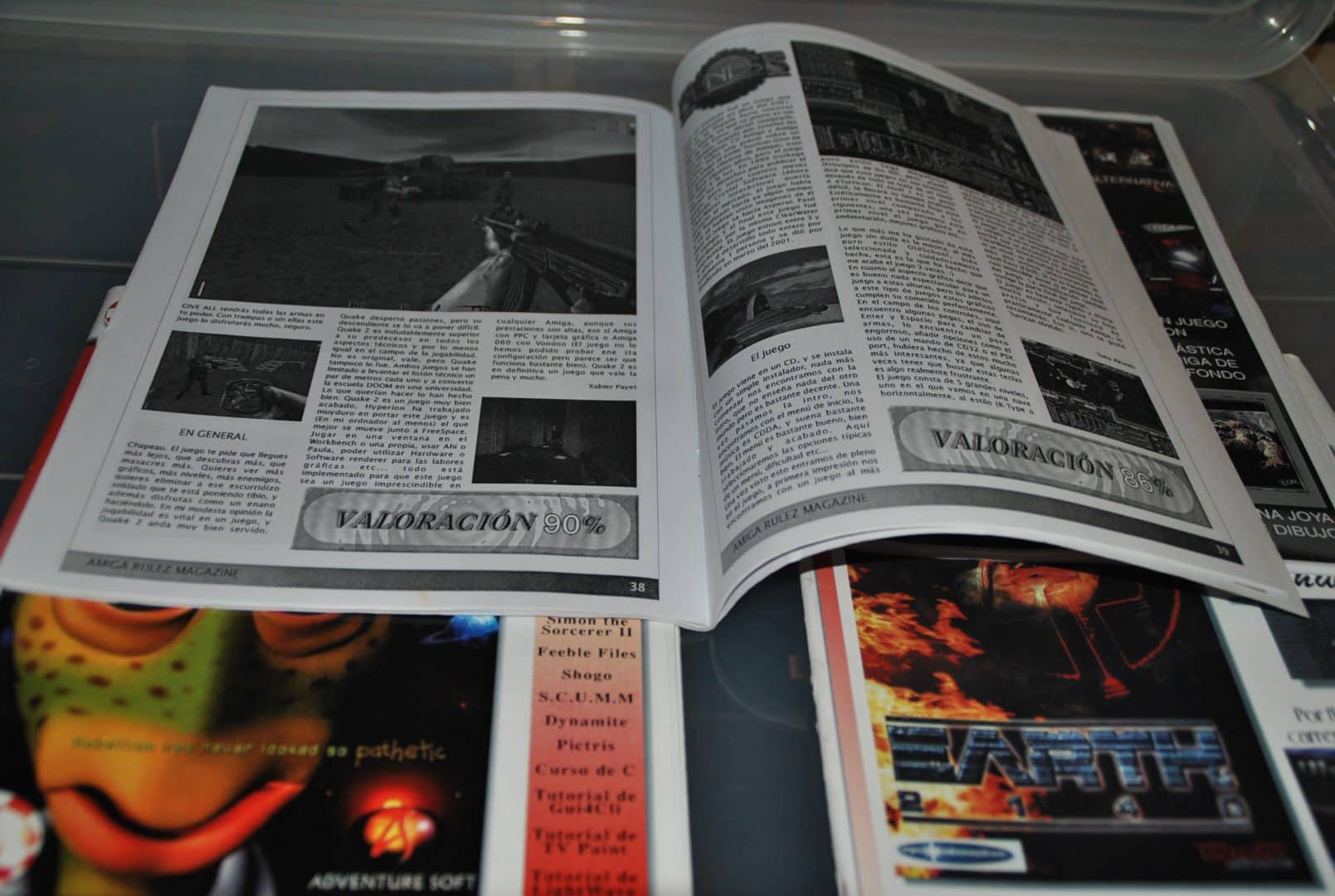 The magazine was far from professionally done, but it had a great design and easy to understand, with enough pages in it too. Very kind scores on most reviews in it, maybe too nice?.

It was clear from the start that this magazine was created by gamers and that they wanted to contribute with something, great start and i wish there would have been more issues and maybe even an English version of it.

Based upon screenshots and my chats with the editor in the past the magazine was heavily focused on everything Classic Amiga, Hardware expansions, upgrades and so on as well as information about the best patches and so on to get the best possible experience of the hardware.

Thanks, Anarka/Amipuzas for the collectibles. 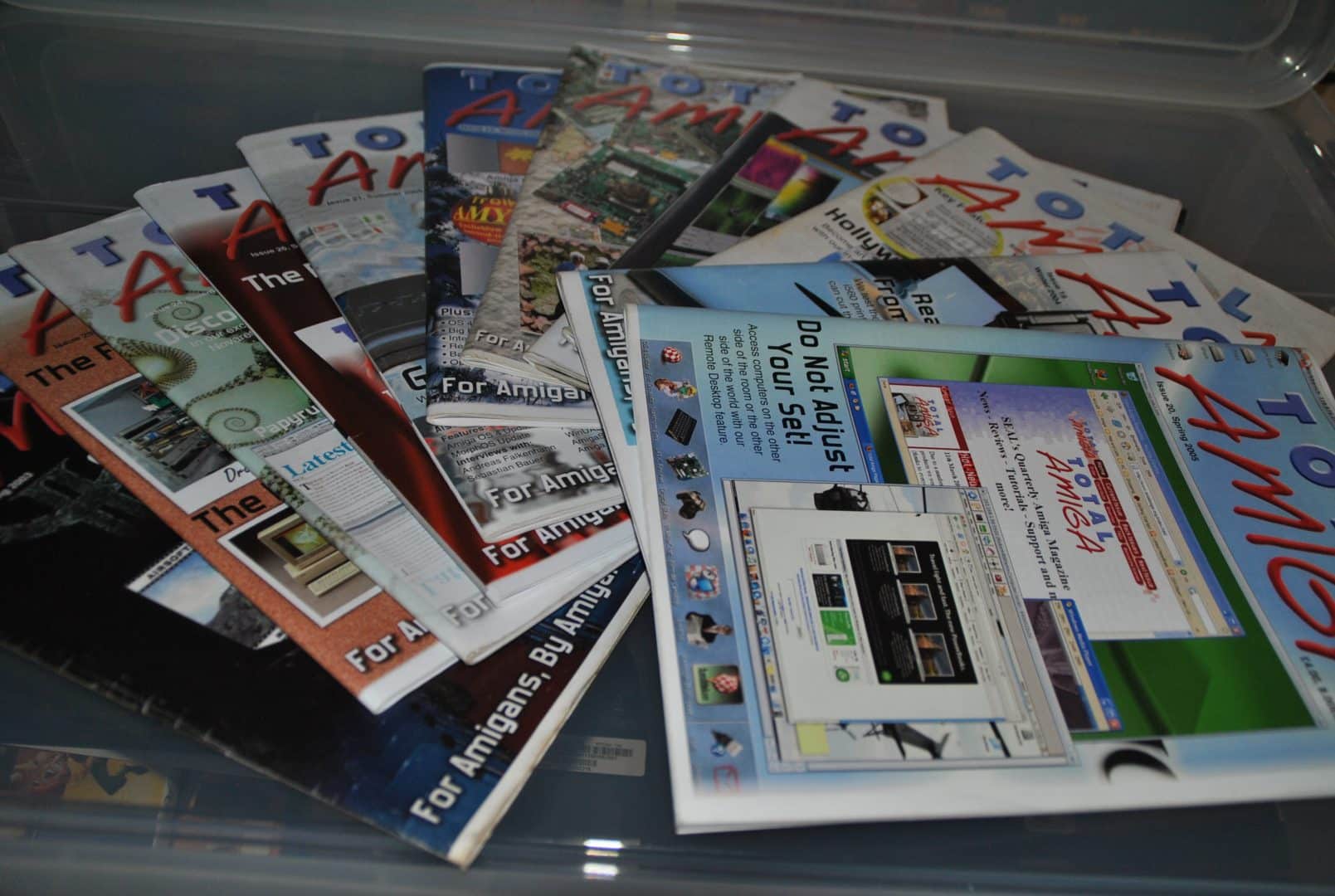 Total Amiga was yet another of those Amiga Club magazines which went from a small leaflet to quite the success. The day the magazine was put to rest was a sad day on the forums. I can’t remember exactly the main reason for its demise but it was kind of expected since the Amiga community grew smaller by the day.

I contributed a few times to this magazine albeit not as much as i should have i guess, back then i had very limited time and to be quite frank, i was busy trolling (and helping)on the forums.

It was always a magazine that i was looking forward to reading, everytime a new issue came in my mailbox felt almost like Christmas.

The best thing about Total Amiga was that it was a very personal magazine, it is kind of hard to explain but it felt like if the people who wrote it knew how and were to connect with its readers. One of the reasons behind this was most likely down to its roots and being an active club at the same time. 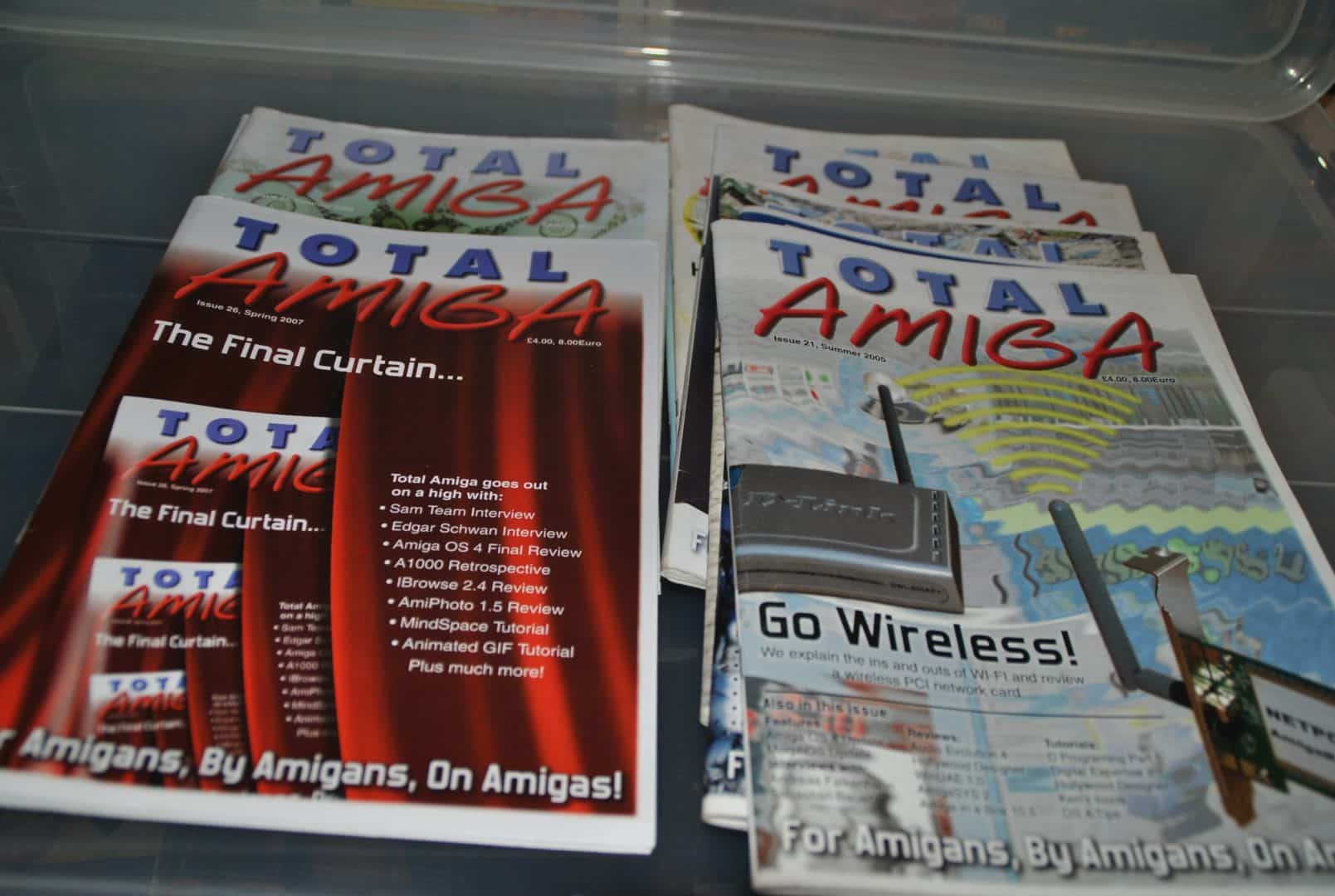 The magazine on the left hand here was the very last issue and ironically enough the magazine was full of good articles and much-awaited programs like iBrowse.

In general content wise the magazines were packed with good articles, many from personal experiences and how and why and where to make the best of them.

I was a very active Amiga user at this time (i am still though nothing like back then) and i basically knew my way around most things so it wasn’t all that much to learn from the magazines yet it was a great read and they always accepted feedback too. 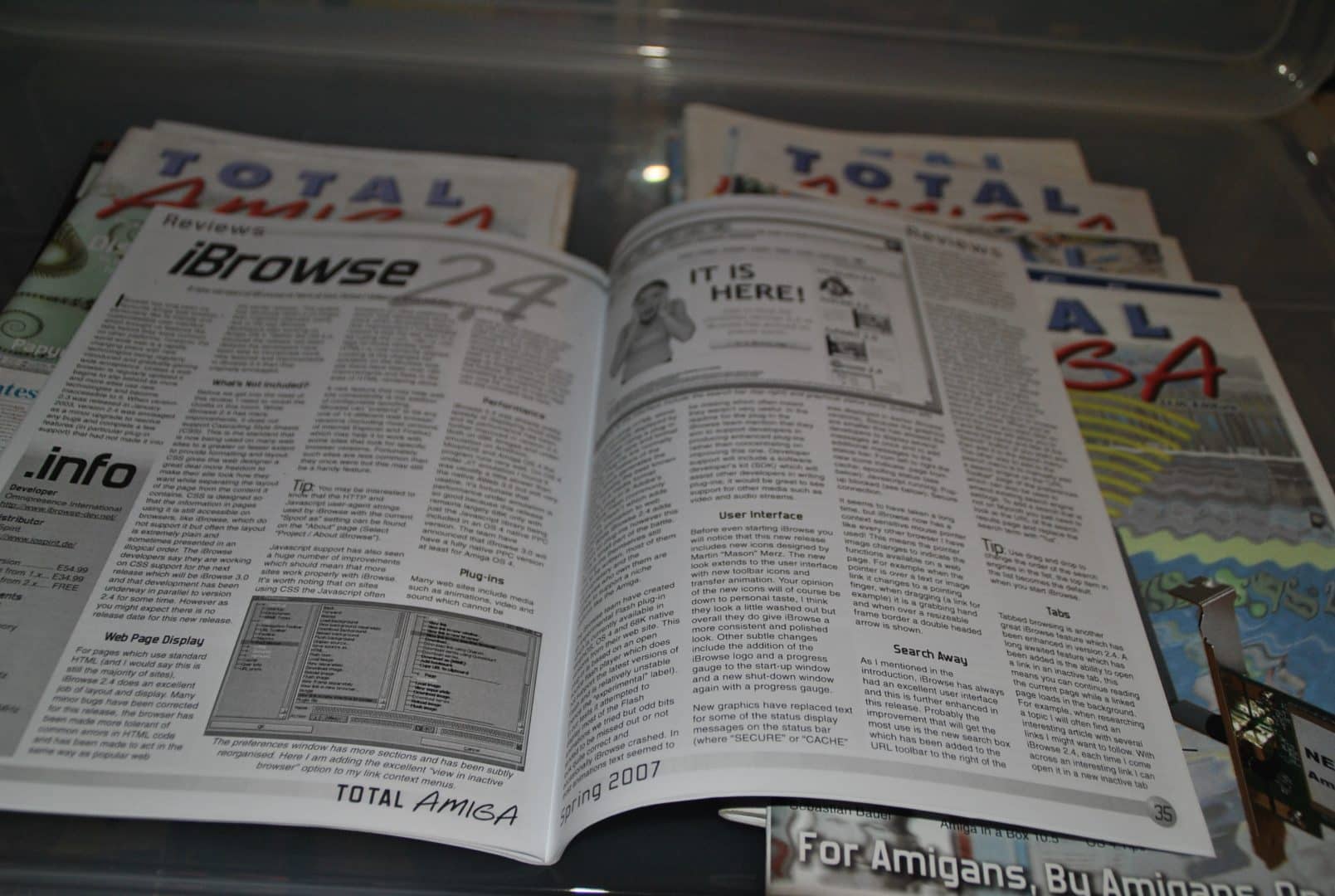 The editors took the feedback seriously and responded with better articles and so on.

The last issue might not have been the best issue but it was certainly way better than what was to be expected for a magazine that said bye bye on the front page.

If my memory serves me correctly both guys in charge of the magazine left the Amiga shortly after, in favor of Apple Mac’s.

A few years back one of the editors came back to the Amiga but he never managed (so far) to bring the magazine back. 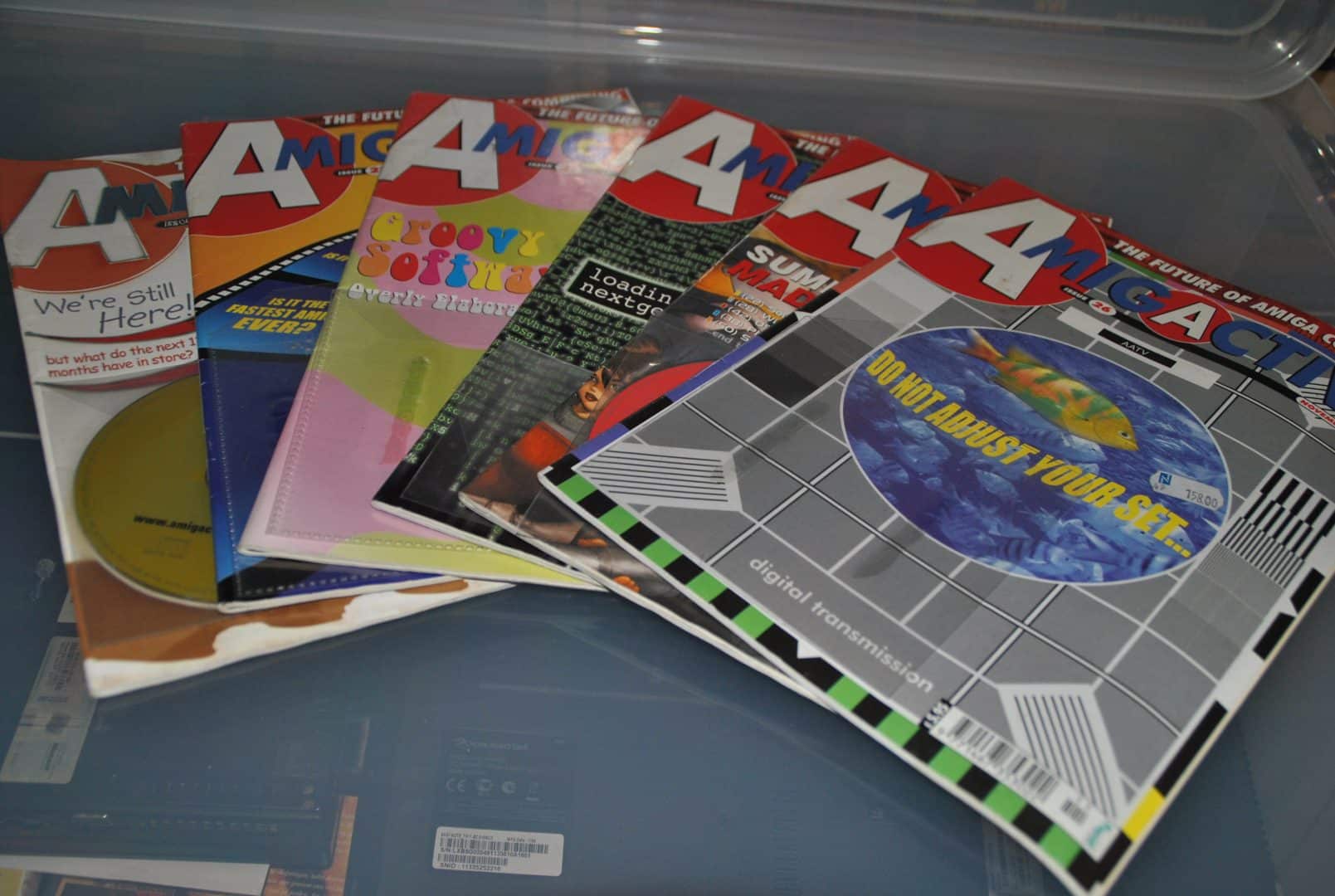 Amiga Active was the very last Amiga magazine out there that was sold in normal bookstores and such, the last issue hit in early 2002, a mere 2 years after the first issue. The reason was that there was too little to write about and that there had been too many disasters and it was very hard to follow just rumors and forum banter.

Around the time that AA left us was a time where there were quite a few things in production and there was hope, yet just about everything failed, well except for AmigaOS4 and MorpOS.

Amiga Active was a very fresh magazine for its time, it was professionally done with well-done articles and by proper Amiga people or previous Amiga celebs anyway. 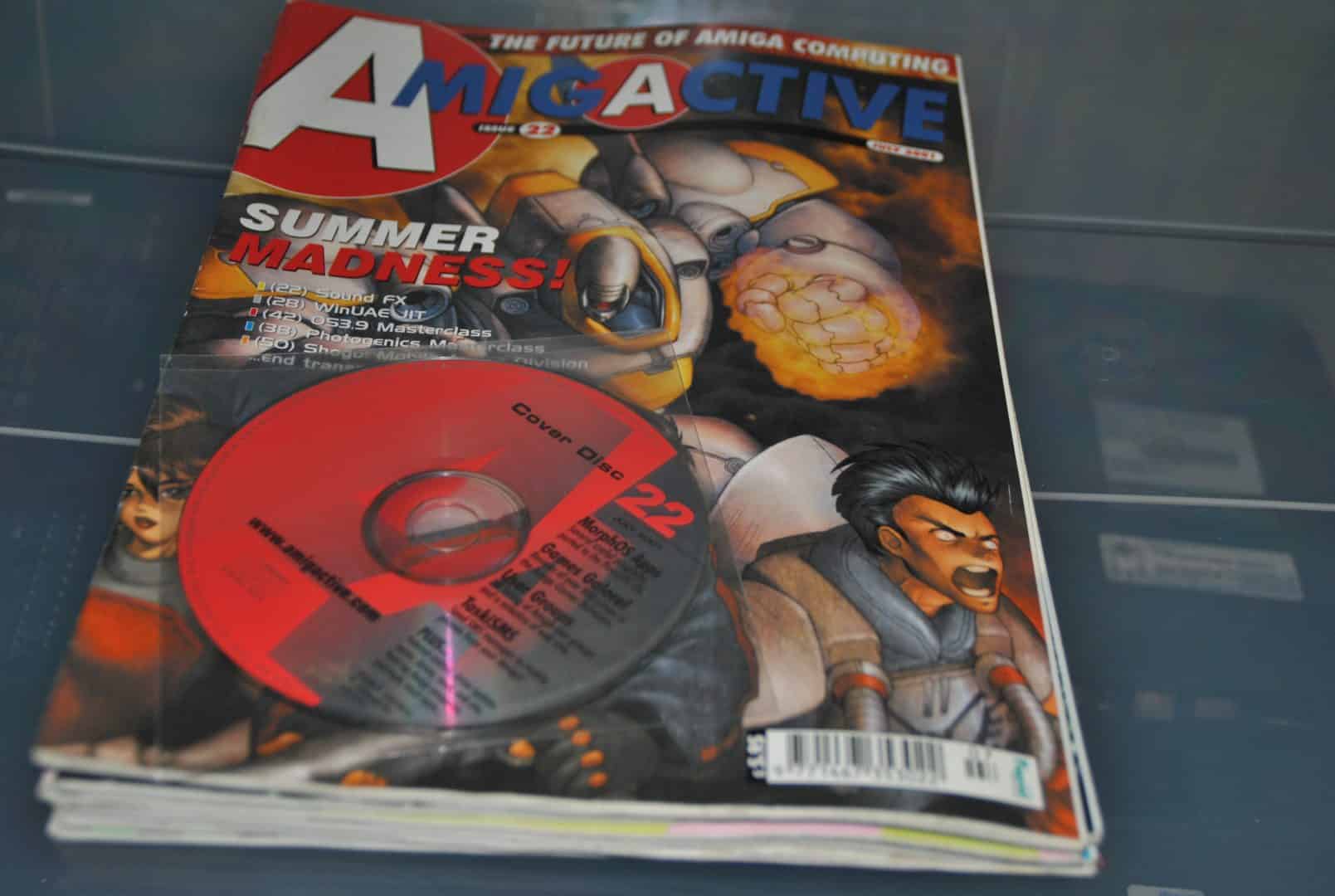 The magazines were quite thin and this is one of the reasons for their demise, not much to write about at all. Games production had gone from low to very low and sales were so low that those who did manage to get out a game never wanted to do a new one again.

I used to support the team with various files and upgrades and luckily i managed to get them to store a few updates that would have been lost by now if it had not been for their CoverCD’s. 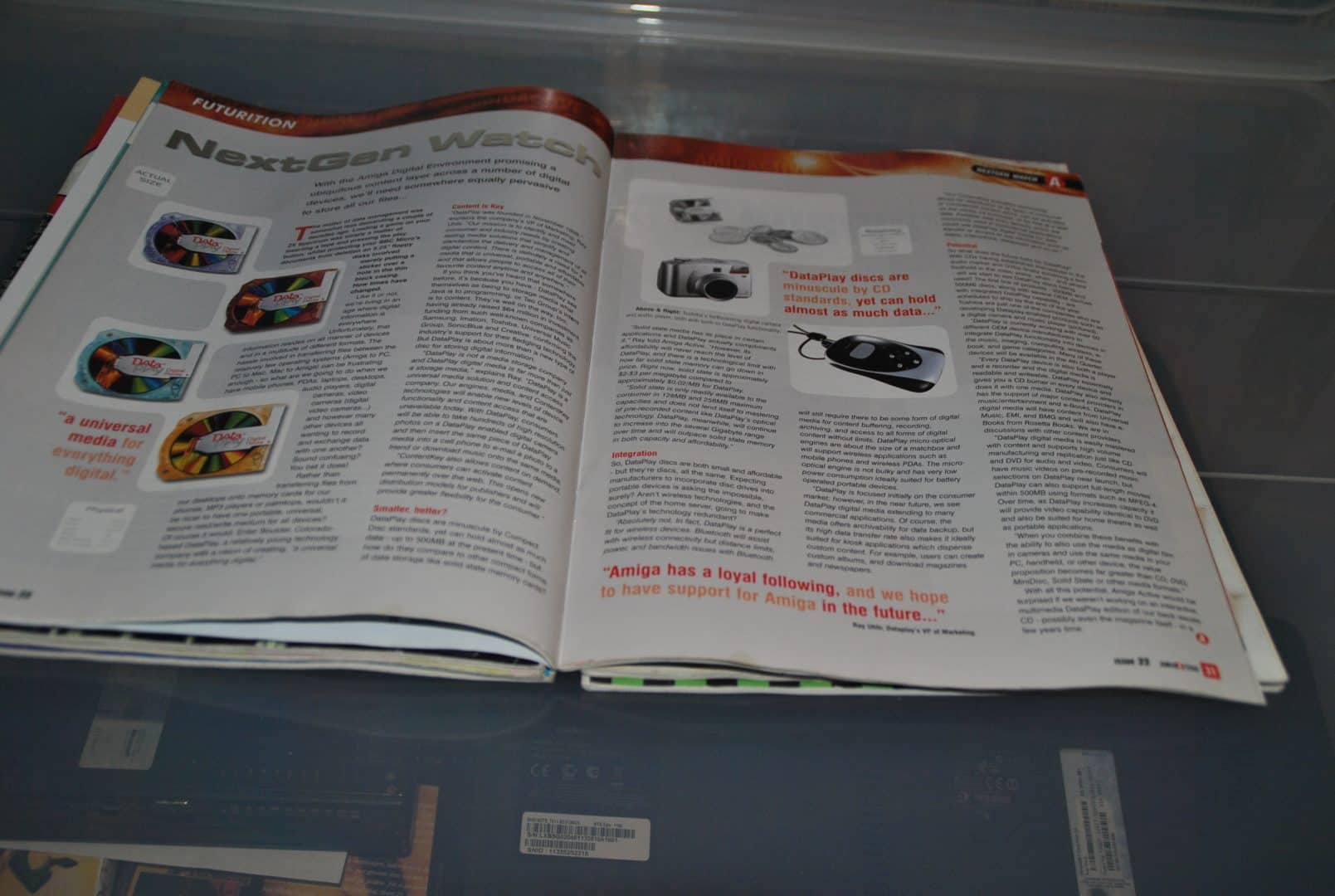 As the games and programs marked stooped and not much to write about, except for internet rumors, of course, their only chance to survive was to add a lot of adverts and fillers like hardware info, stuff that was for all general computers and daily use like Camera’s, mousemats and so on.

When i look at the magazines today i have to say that they look darn good even by today’s standards.  Amiga Format and CU Amiga, for instance, looks good too but dated.

Filler or not, AMIGA ACTIVE looked good and was always a great read. It never came as a surprise that these guys went from Amiga to Console magazines or such afterward working at AA.

I find it very hard to believe that its been 13 years already since the very last issue of AmigaActive, an issue that i had to look everywhere in my town for.

Amiga news sites like Ann.lu, Amiga.org, and Amiga news was, of course, one of the reasons why magazines died out as they covered most things, but these sites also managed to nearly killing the Amiga as there were so many fights and things going on that just about everything felt like a god damn lie. Reading AmigaActive after a session on Ann.lu felt like you had gone from hell to heaven and yes the magazine painted nice roses and such with their articles, but i doubt people would bother reading their magazine if they had stooped down to the level at the troll sites.

Content wise the Cover CD’s fulfilled what was going on in the scene, but that is where it stopped, not much was happening so the content was poor and if one was online a lot then most contents had already been downloaded.

Reading a 15 year old magazine today is like using a time-traveling machine for me, it feels unreal and many of the articles nearly make me cry, it was a mental test back then but today when you know more (Amiga Lawsuit etc), well let’s just say that it is amazing that there are still people involved in the Amiga today.

Edit: 2018: The first post in this series is listed above, have a look there as well.  A new AF follows up might happen soon as it’s still going strong and a very popular magazine (end of the edit, the reason for the edit is that Google for some reason never found it, hopefully, it will work now (in search).