This article was supposed to be out a few weeks ago but summer vacation and all sorts of other excuses made this article impossible to finish up and publish on time.

The wait is over and this is probably one of the first surprise releases for me this year. There aren’t all that many Karting games out on the PlayStation 4 and the only one I know that is coming in the near future is Sonic All-Stars Racing 3 which was just recently announced few a months ago. 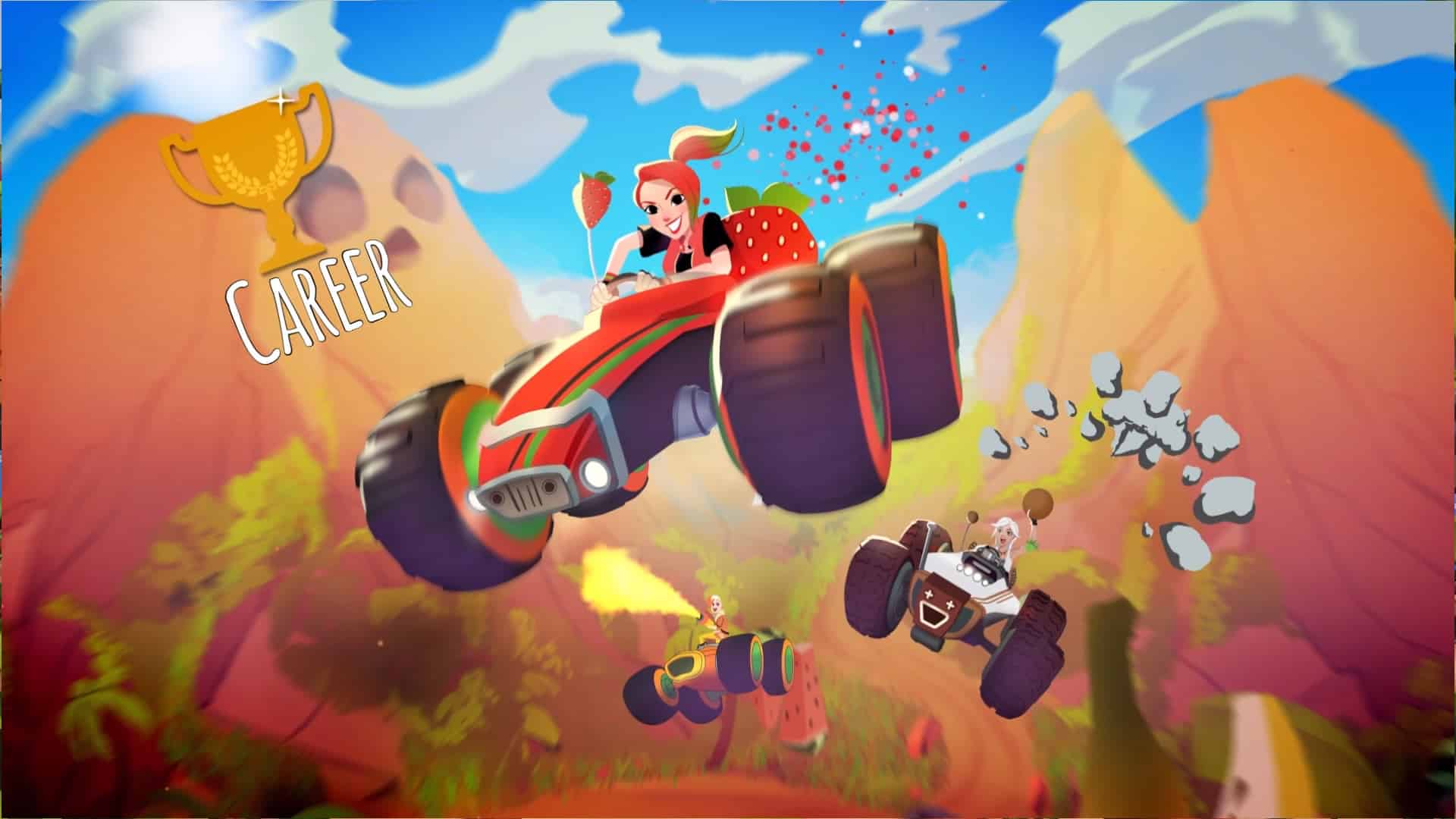 All-Stars Fruit Racing is published by PQube and developed by (the startup company?) 3DClouds.it and it’s a hybrid take on the Driving, Drifting and Karting genre where seasonal fruit is the key ingredient for both weapons and art style.

The first impression you get while playing the game is how lush and colorful everything looks like but everything is hampered with a very tedious but optional tutorial thing, once you have played through that (and most likely learned nothing from it) is when the fun starts.

The tutorial is about one of the key features of the game – the weapon system.  The weapon system is a bit cool but in the heat of the battle/race, you will most likely never focus on the weapons and just fire whatever you got anyway.

I have done this review a bit different this time as most of the play time I had with this game was with my son (9) and his friend (8) and I will try to include some of their comments while playing and other things that they did while playing with me. 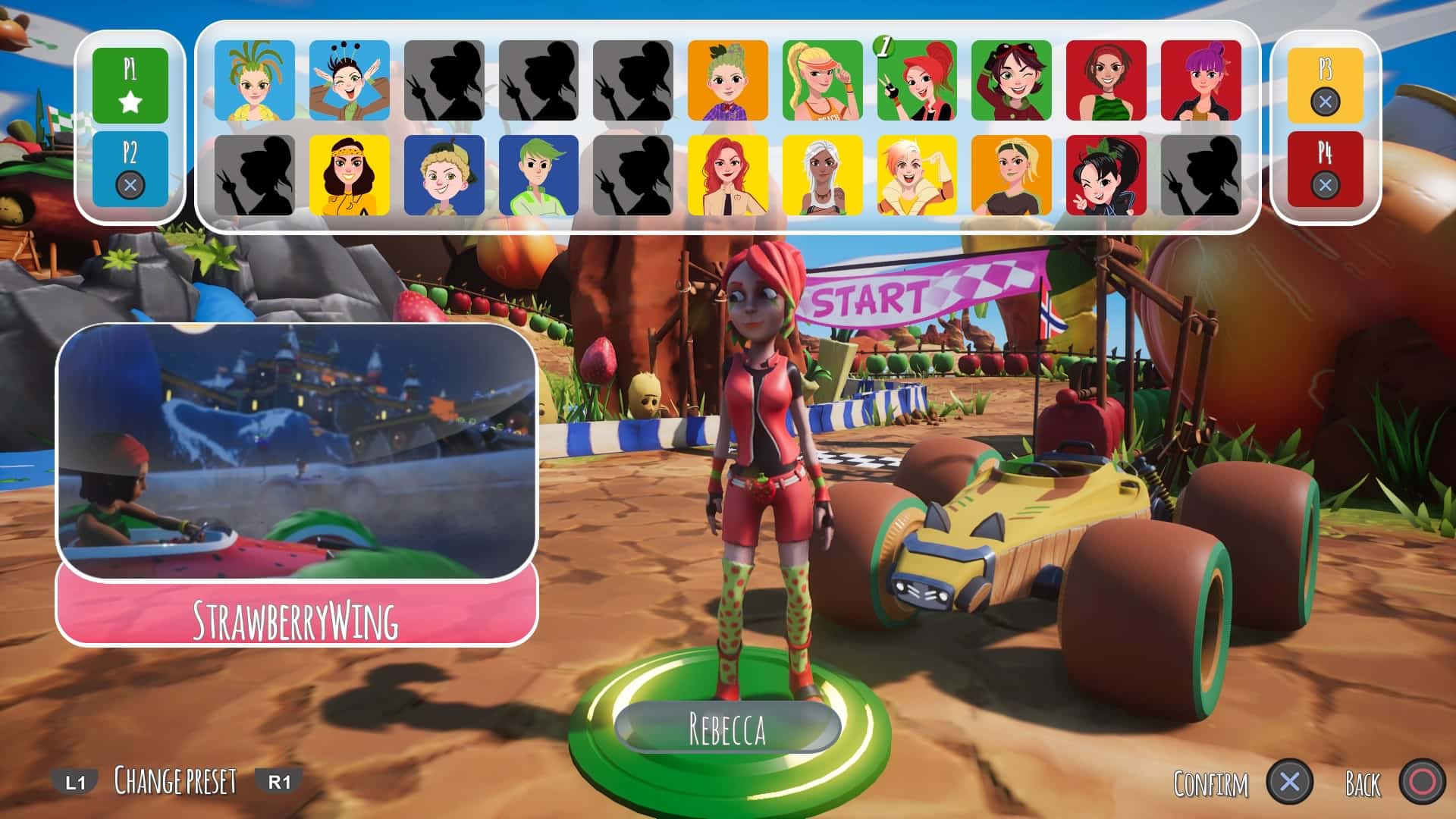 There are loads of characters to chose from in the game, most are locked from the start but you unlock new ones as you play. The only bad part with the amount is that there ain’t much difference between any of them in both gameplay and style although there is that MEGA power up/weapon that is supposed to pull you towards selecting the one you like the most.

Strawberry is the one I have used the most as that got a special power-up that gives me a boost.

The kids just took random ones and had great fun with just about all of the characters, screamed of joy when they used the power-ups and so on, typical them I guess (based on how they play Sonic All-Stars on PS3).

There are loads of things to do in the menu and yes neither of the options are confusing nor unneeded or such, pretty special to see such a game without a bloated menu really.

The garage lets you modify your vehicle a bit, you need to unlock these mods in races and while everything is just cosmetics it still was a bit fun to put on a Norwegian flag on my vehicle and yes the kids loved adjusting everything even more. 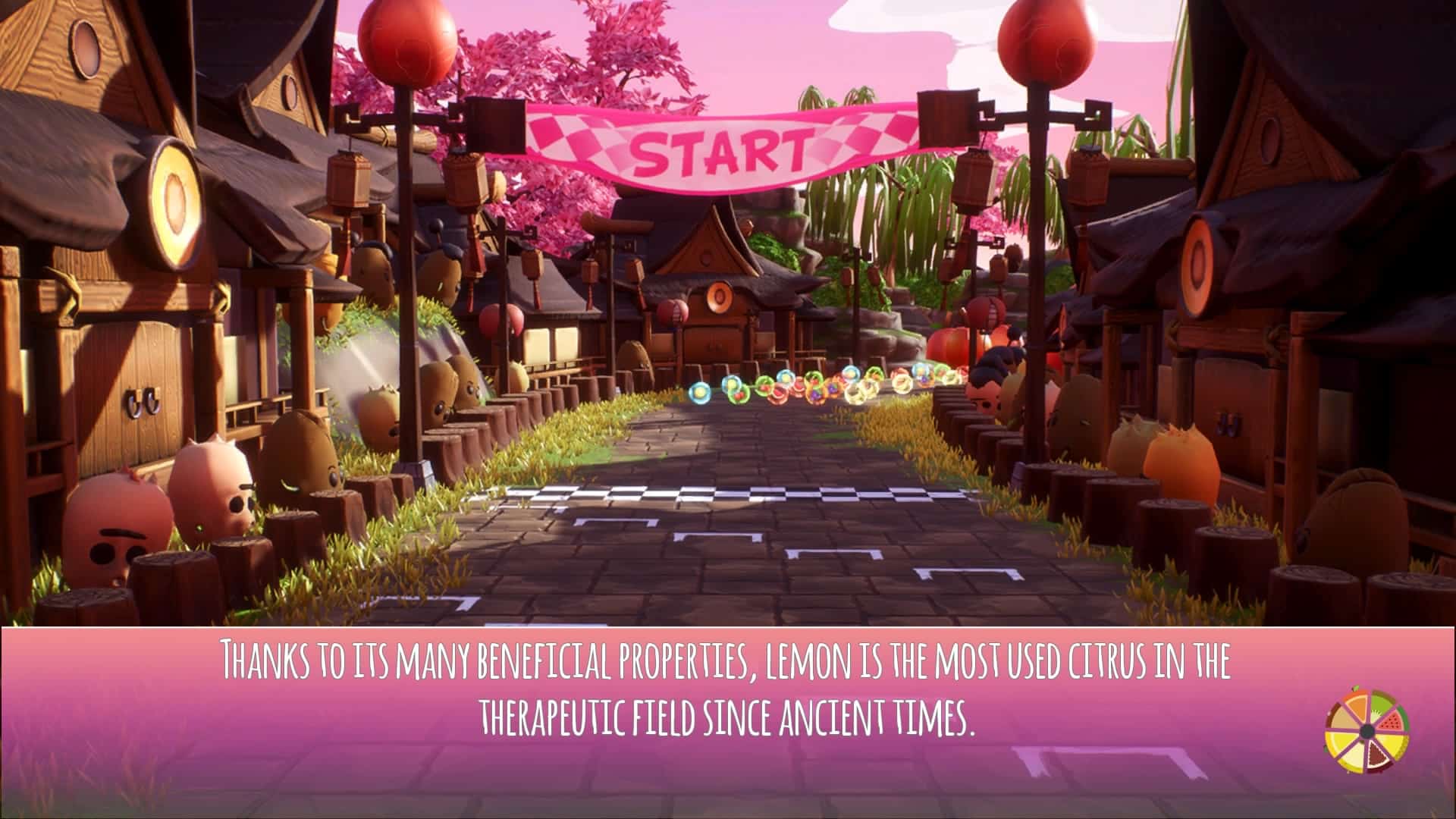 There are some pretty lush loading screens from time to time and while most of the game got very short loading times it is still better than looking at a black screen. The young boys in the house kept talking about these screens and how much they loved this track before they had even tried it.

There are loads of tracks to chose from and the variation in them are actually pretty good although there are some bad ones in here for sure although the good ones make up for those easily.

Colorful, bright and pretty much one happy fruit race is the thing all tracks more or less got in common.

The kids kept on saying how similar some of the tracks are to the first Sonic All-Stars Racing game and I must admit that this is indeed something I said to myself several times too.

The tracks are mostly laid on in a way that you can either drift your way through most turns or you can brake and go a bit slow in them which means that most races will be tight if the players are good and yes this is yet another typical lead the whole race and then get shot in the last turn and get 8th place type of game. 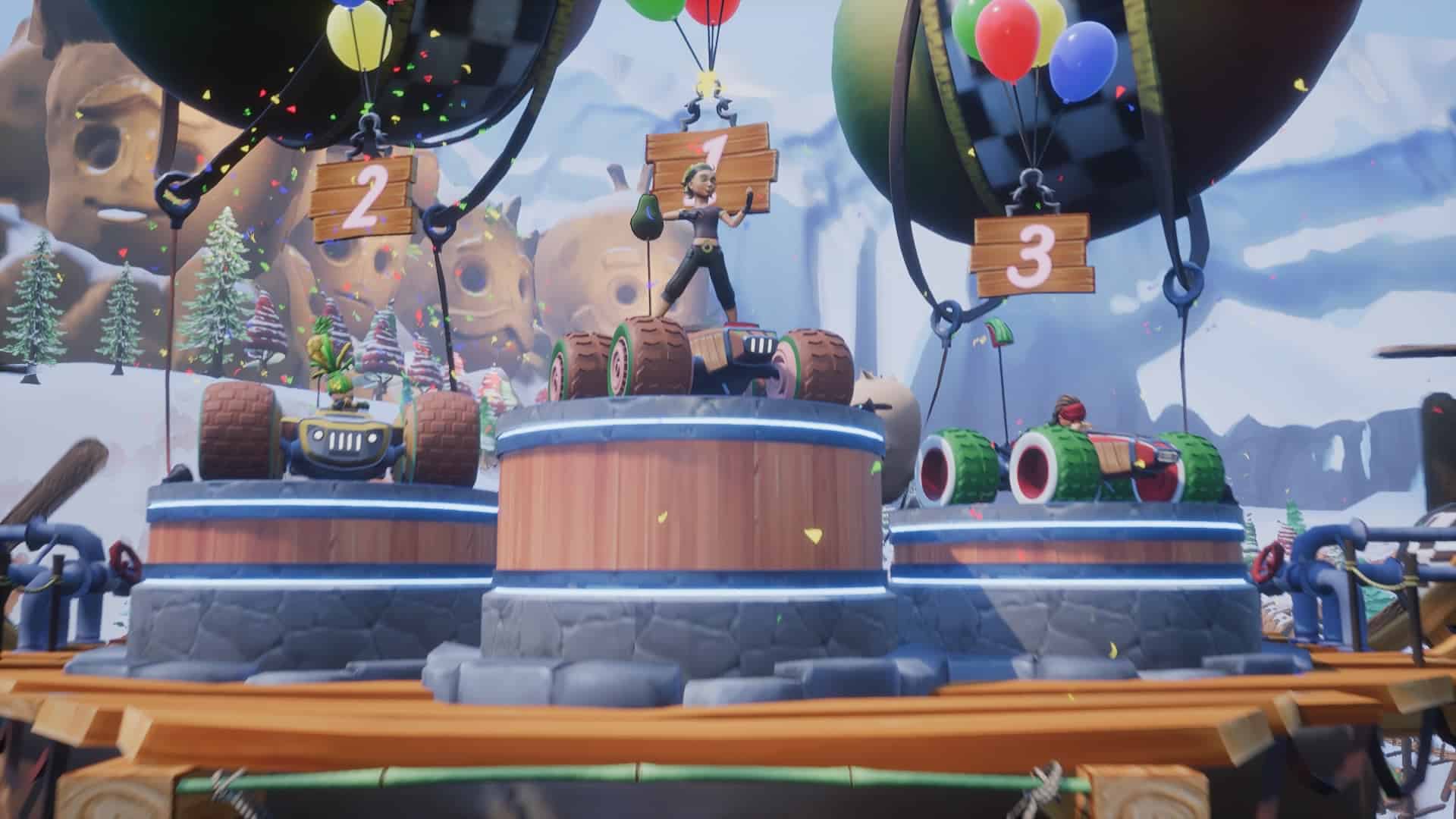 Once you finish a race is when you get this screen, I’d go as far and say it’s unneeded in many of the races and it only makes the loading times longer. The music used here is one of the few bad things about the game sadly, more about that soon. 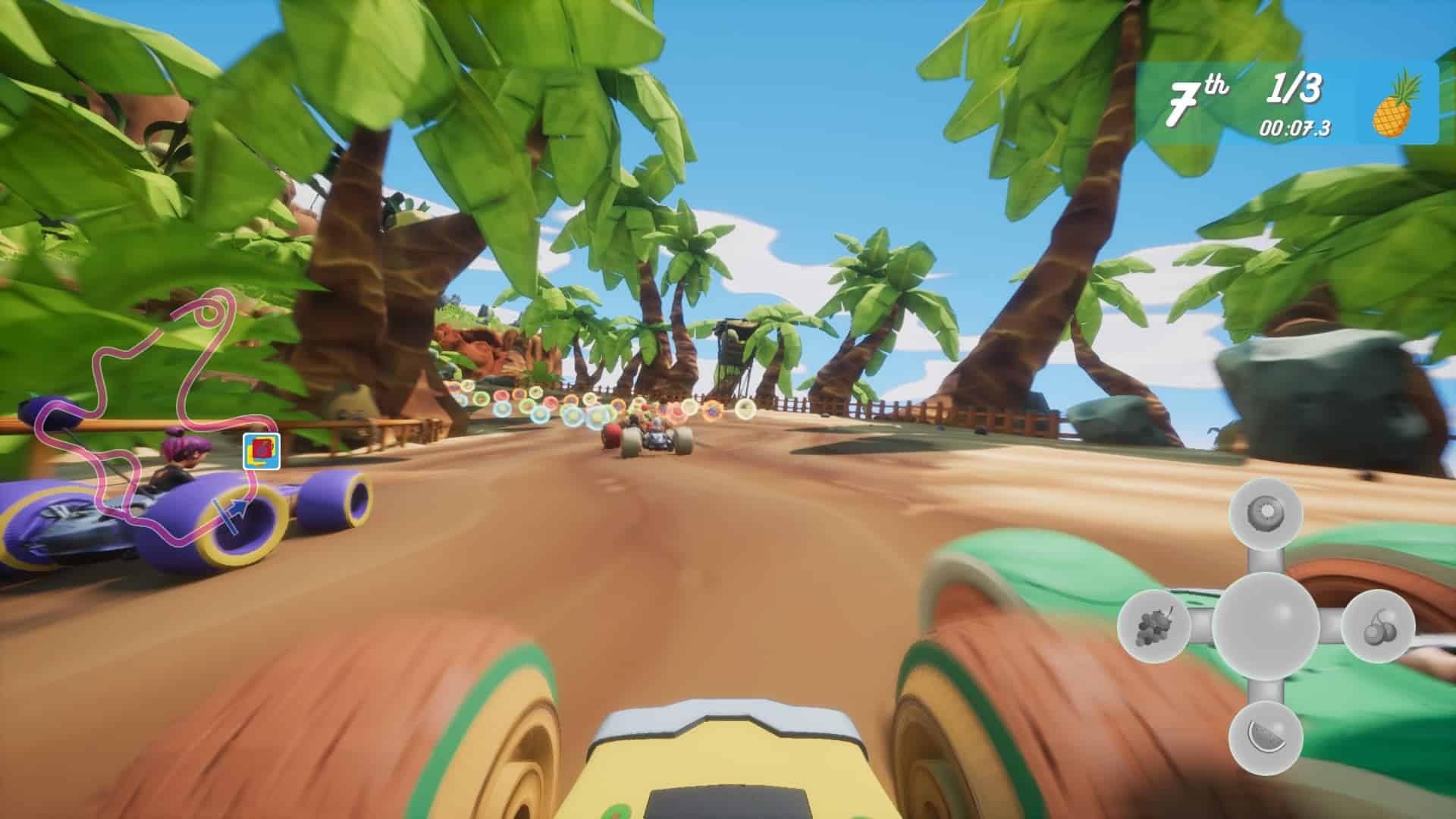 This is a bit uncommon in kart racing games, yup its a first-person view and yes it does look cool and fast but I never managed to master it and every race I tried this view in I came last.

The kids went WOAAH! when they first saw this and asked which button did that! , they did it like once themselves and after that… not seen them doing it again.

Cool stuff and they deserve some credit for doing this mode and I am certain that there are people out there who will prefer this mode over the other more traditional karting views.

The Career mode is spread over 5 different themes/islands which totals up to 11 very challenging cups and the reason for them being challenging is down to the luck factor and how aggressive the A.I all of a sudden get, in other words – very random.

The races seem to be a bit random really as some races can be near impossible while the one after that was very easy, for me this can be a very infuriating thing and if it had not been so fun to play then I would have stopped playing the game for sure.

The bad thing about these cup races is that it’s only single player which means my son and his friend won’t play this much, I find the single player only mode very strange for a game that got a 4 player split screen option and a pretty solid online component on just about everything else in the game.

There are some crazy long jumps in the game, the track design, in general, ain’t flat and boring that’s for sure but those long jumps are just like a breath of fresh air and add something to the game that makes it less “common”. 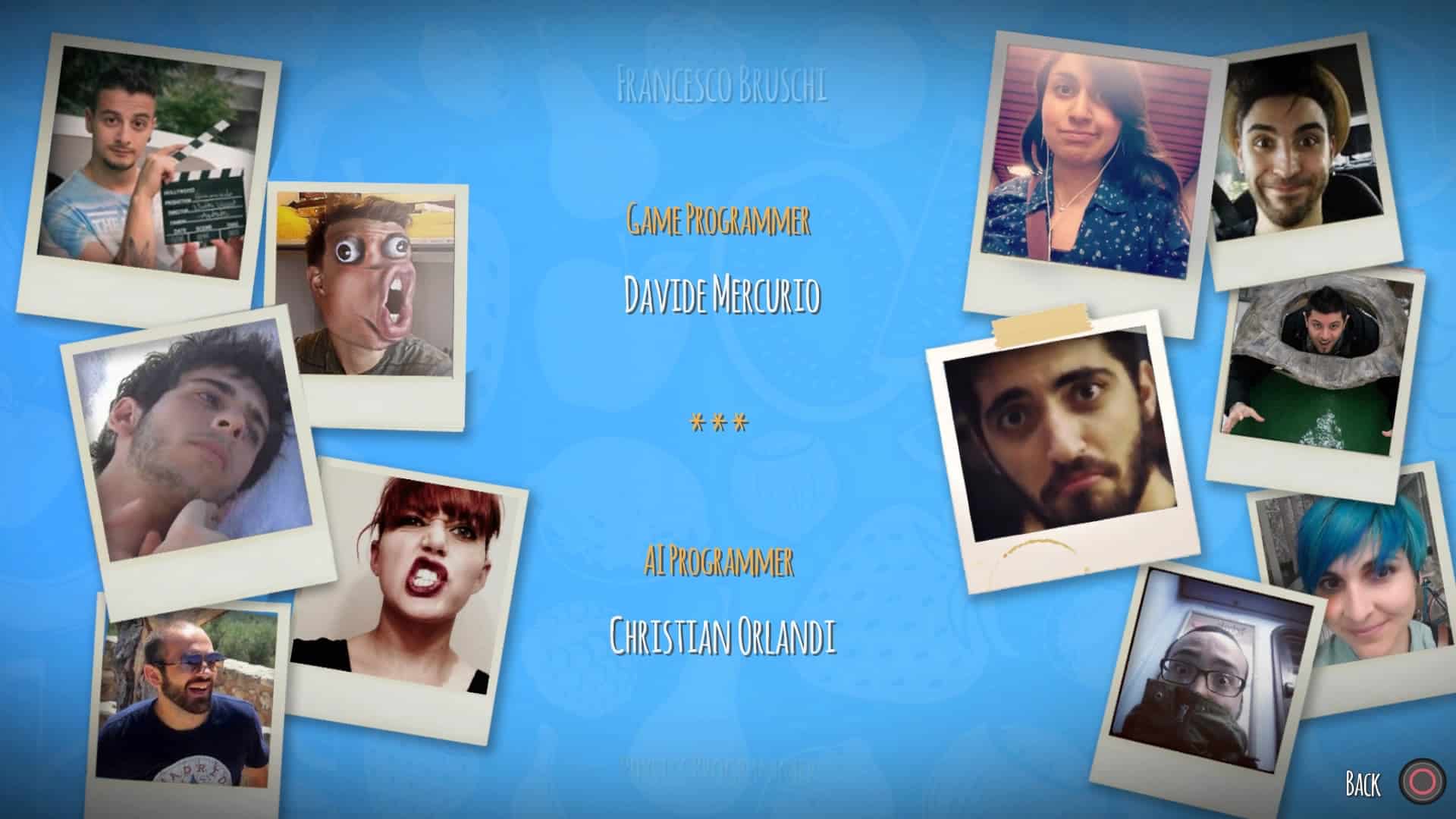 The credits screen is done in a way that made it entertaining to watch, they sure had fun making the game and wanted to show that to us.

Ok, now over to the bad part of the game… and yes it’s so bad that it nearly destroyed the game for me.

The music in the game is not good, 99% of the tunes in it is just noise to me and while I guess someone out there might like its jazzy funky fruity something style it certainly made me stretch for the mute button more than once.

There is a volume slider for the music in-game luckily, I turned it off and played most of the game without any music but I also tried to use Spotify a bit too and yes even my worst playlist there managed to be better driving music than the tracks included with the game.

The kids though, said stuff like listen to this cool music while doing a small dance move… OH, NOooooooo oo o! … I AM 100*% SURE THEY ONLY SAID THAT TO PISS ME OFF!

There are some tracks where the music is actually good though so it’s not all bad. 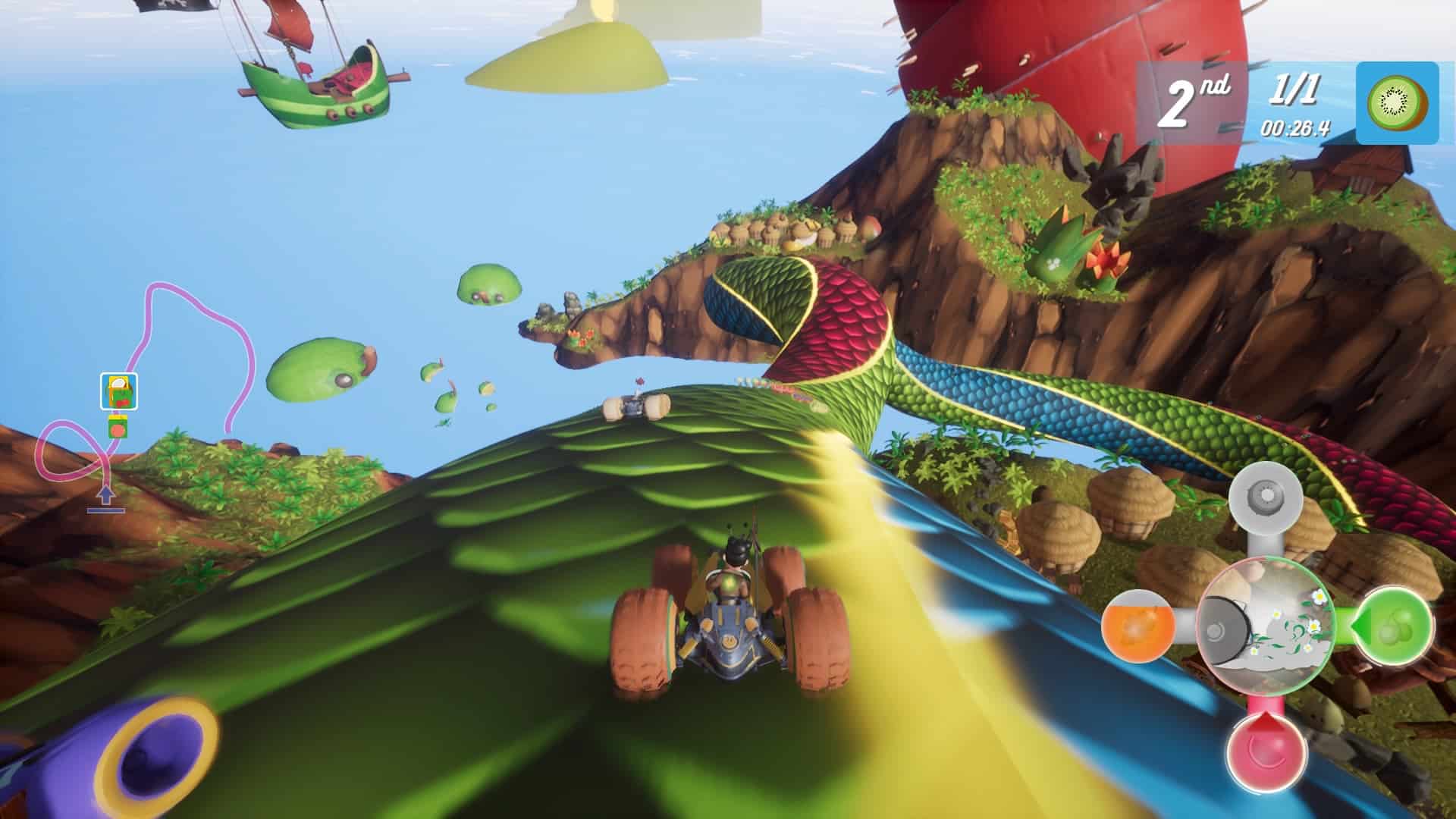 This is my favorite track in the game, brilliant stuff which was both hard to control and very fun to drive.

The kids went like DON’T DRIVE IN THE BLUE STUFF! and there was lots of screaming and laughter going on which is always a good sign if they like something or not.

The performance of the game could have been a bit better although it ain’t a big problem at all although there are sadly some random frame drops and small hiccups that destroy something that could have been a really smooth racing game.

The controls are twitchy and accurate enough and after 20+ hours of game time, I can say with ease that there was never once that I wanted to blame the controls (or framerate for that matter) when I crashed into something or whatever.

All-Star Fruit Racing is one of those games that offers maybe too much stuff for its own good with a shedload of both Offline and Online modes as well as a really good time trials section (and a very good trophy/achievement list too) , its definitely one of those games that will be played a lot before being replaced with other similar games on my children’s Console.

The kids in the house never said it was the best game ever nor did they not want to play it either, generally very positive to it and as always – If it’s multiplayer, customizable and fun then it’s a winner in their eyes.

3 thoughts on “A Look At: All-Star Fruit Racing”