This is another title where the naming convention 101 should have stepped in for sure, it probably sounded amazing in Chinese right? HIDDEN DRAGON LEGEND (Insert screaming Chinese voice here) but in English, these words don’t go too well together.

The Legend Of Hidden Dragon does sound better does it not?

My point with this opening is that this game was nearly skipped because of the name. Luckily the summer sale on PlayStation Network made me interested due to the super cheap price tag of $3.99.

Hidden Dragon is one of those 2D/2.5D old-schools styled beat ’em up brawlers with platforming elements that we used to love back in the day, one of the first game I played in this genre was called Ninja / Ninja Mission on the C64/Arcade and Amiga.

The concept is pretty straightforward as you basically fight your way through each location and after that, you will do some climbing and jumping and so on and then you will get to a new enemy encounter, you keep doing this until the end of the stage where you will encounter a boss.

Yes, at times Hidden Dragon Legend does indeed feel like one of those old classics, for better and for worse sadly. 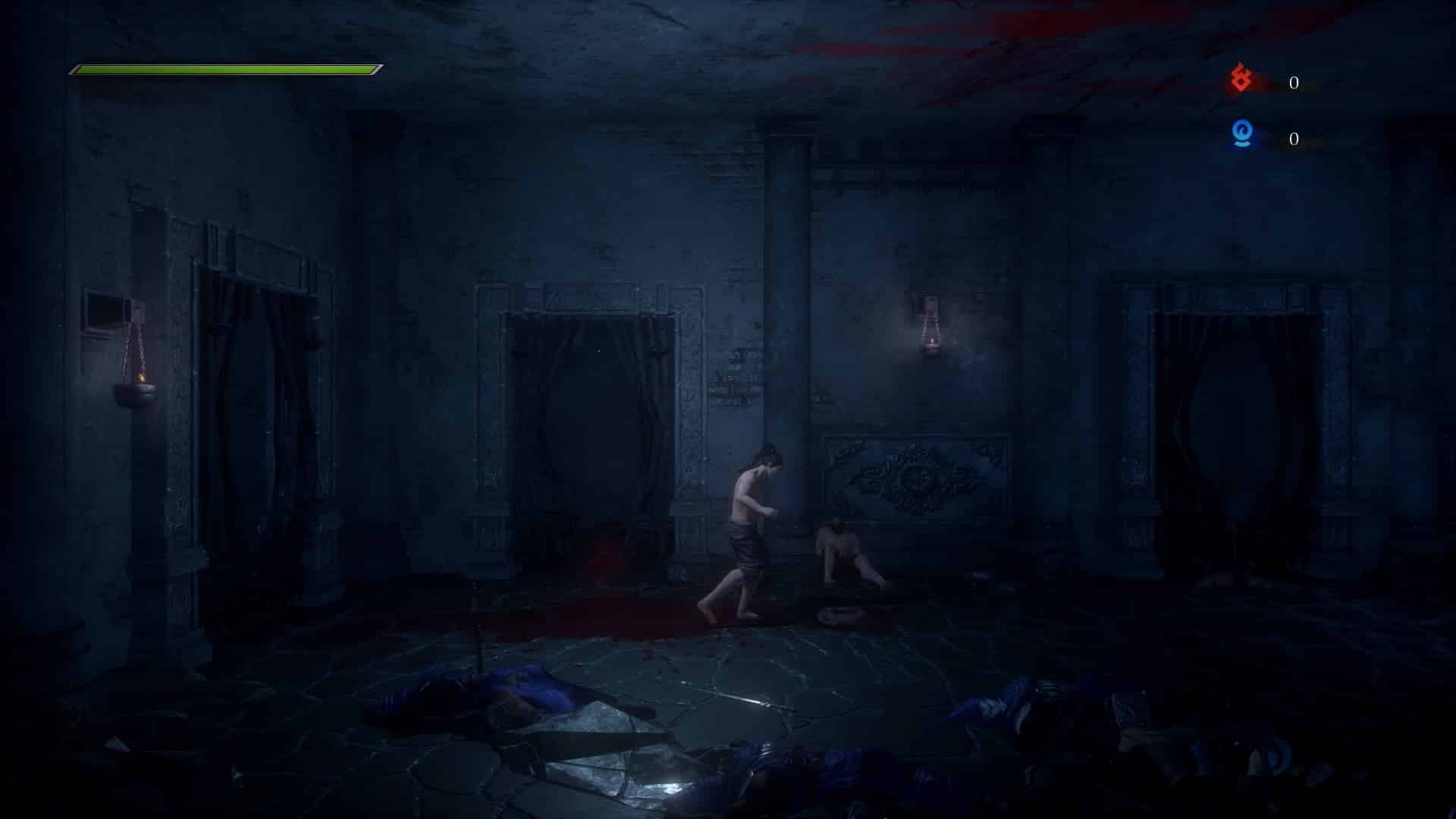 Hidden Dragon Legend starts off really bad, I’d go as far as saying that this is almost a game breaker and the reason for that is simple, the general feeling of movement and controlling your character in the prologue is stiff and unresponsive.

The prologue is short and while it does have a meaning it must be said that this could have just been a video instead, it would have been better to just start when you get into the action.

Playing a Ninja(?) with a limp is NOT FUN.

To everyone: Just play through it, try to forget the opening and start enjoying the game from the first chapter instead.

When the game start to get fun is when you get to show your combat and button skills, the game will get very difficult at times and you will have to learn how to fight to stand a chance.

The way the levels are built up works great as a motivator to keep pushing on, most battles in the first few hours are set up against everything you have learned early on although some boss battles can be downright unfair until you start checking your weapons, skills and potions menus, more about that later on.

Hidden Dragon Legend does look very dark and boring in the screenshots here and yes you shouldn’t expect a visual explosion at all in the game but there’s something about the style that “just works” better when you actually play it.

One could go as far as saying that there ain’t enough enemies in the game and that most battles will feel repetitive at times, but this is an old-school type of game and this is a typical and common feature right?.

The number of enemies ain’t a problem at all, all of them are different to each other with sometimes a very different type of fighting style too which means that you need to actually think when fighting several types of enemies at the same time. 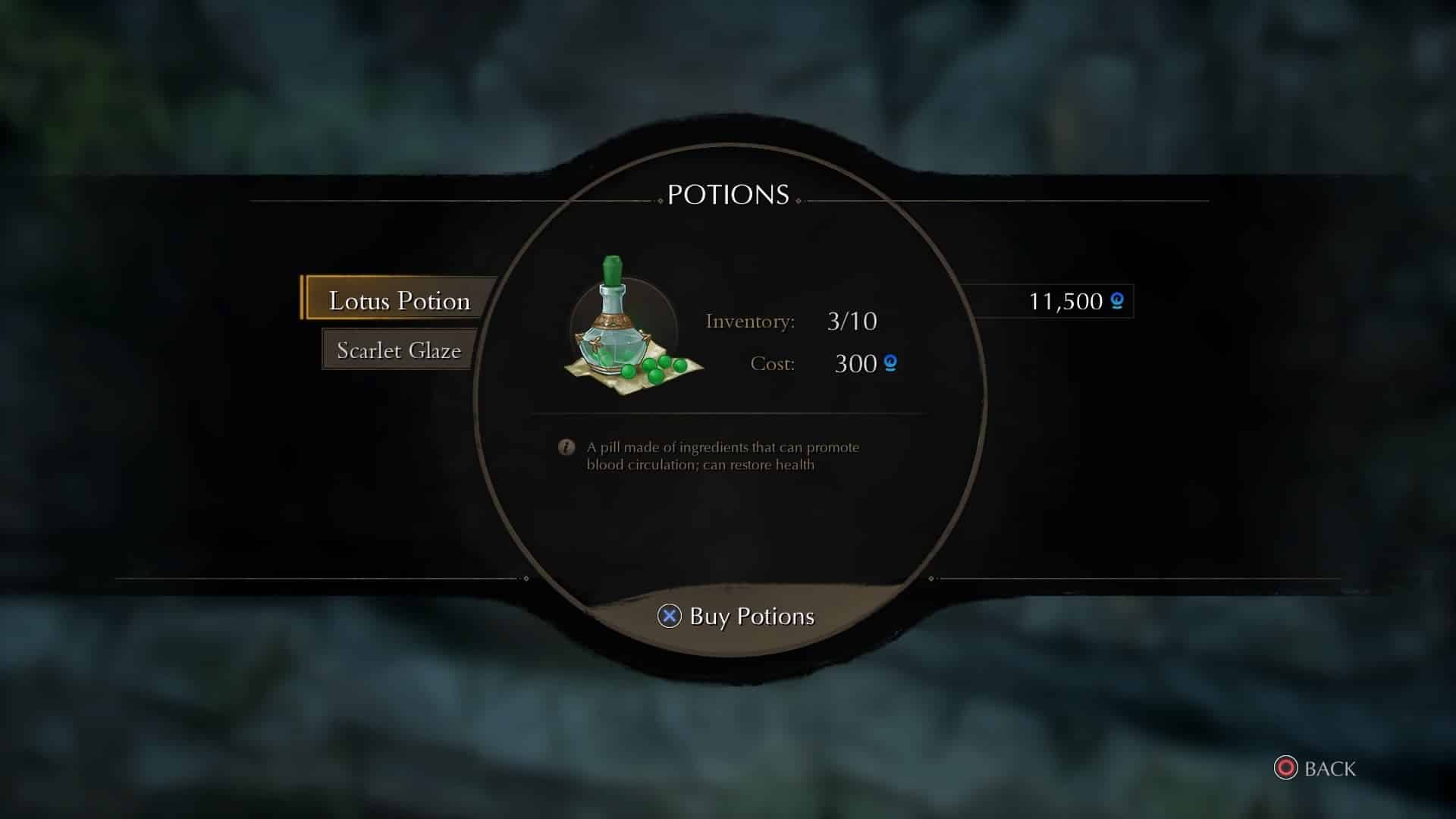 This is the most important menu in Hidden Dragon Legend, without this you will be literally f*ck*d, it took me quite a while before I realized that there was such a menu in the game.

How hard can it be right?, press Options and select Potions and then Buy Potions right?.  Well, for some reason this little tutorial went past me and it nearly broke the game for me (read, an awfully difficult boss battle ahead!). So this is my best tip for YOU: There’s an buy potions menu that you can access before any battle in the game, make sure you got 10 Potions there. 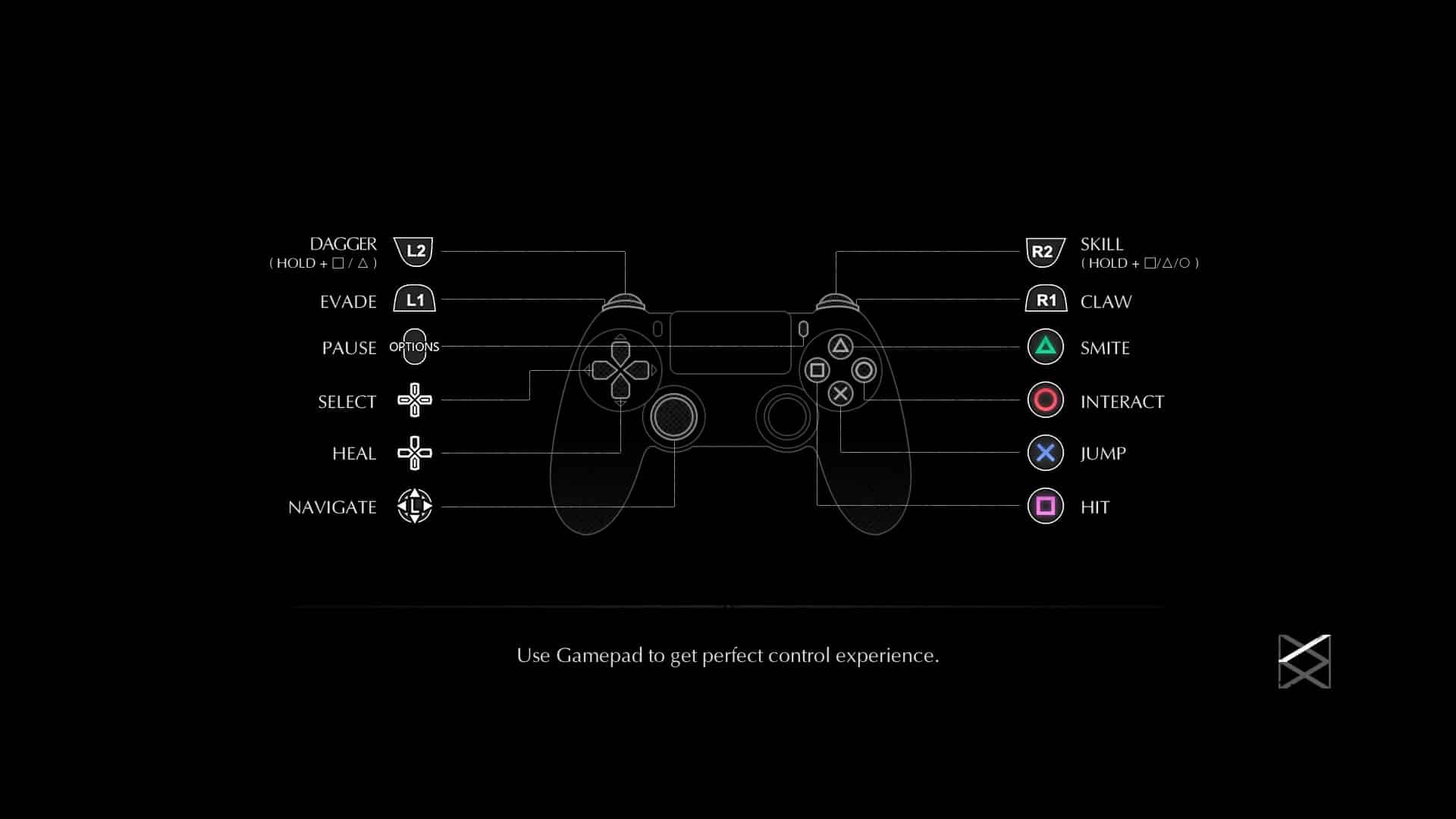 It seem’s that this game ain’t a console exclusive right?, USE GAMEPAD to get perfect control experience…  OK, but this is a PlayStation 4 game and I doubt this game actually works with a steering wheel.

Hidden Dragon Legend ain’t a huge game or anything, I used 5-6 hours to complete it on standard difficulty but once you complete it is supposedly when it gets even better as there’s a level system for weapons and skills that you will bring with you into a NewGame+ mode.

The length is never a problem with the game and it felt like it was a good time to quit when the game end scroller ticked in.

This boss battle was nothing short of epic, imagine if a game had this in 1988, this battle reminded me a lot of a certain boss battle in Ninja Spirit, well not really but there is something about this boss design that made me think of Ninja Spirit from IREM nonetheless.

One thing though, the game tries too hard to be old-school here so the battle is pretty much not as epic as it looks like. 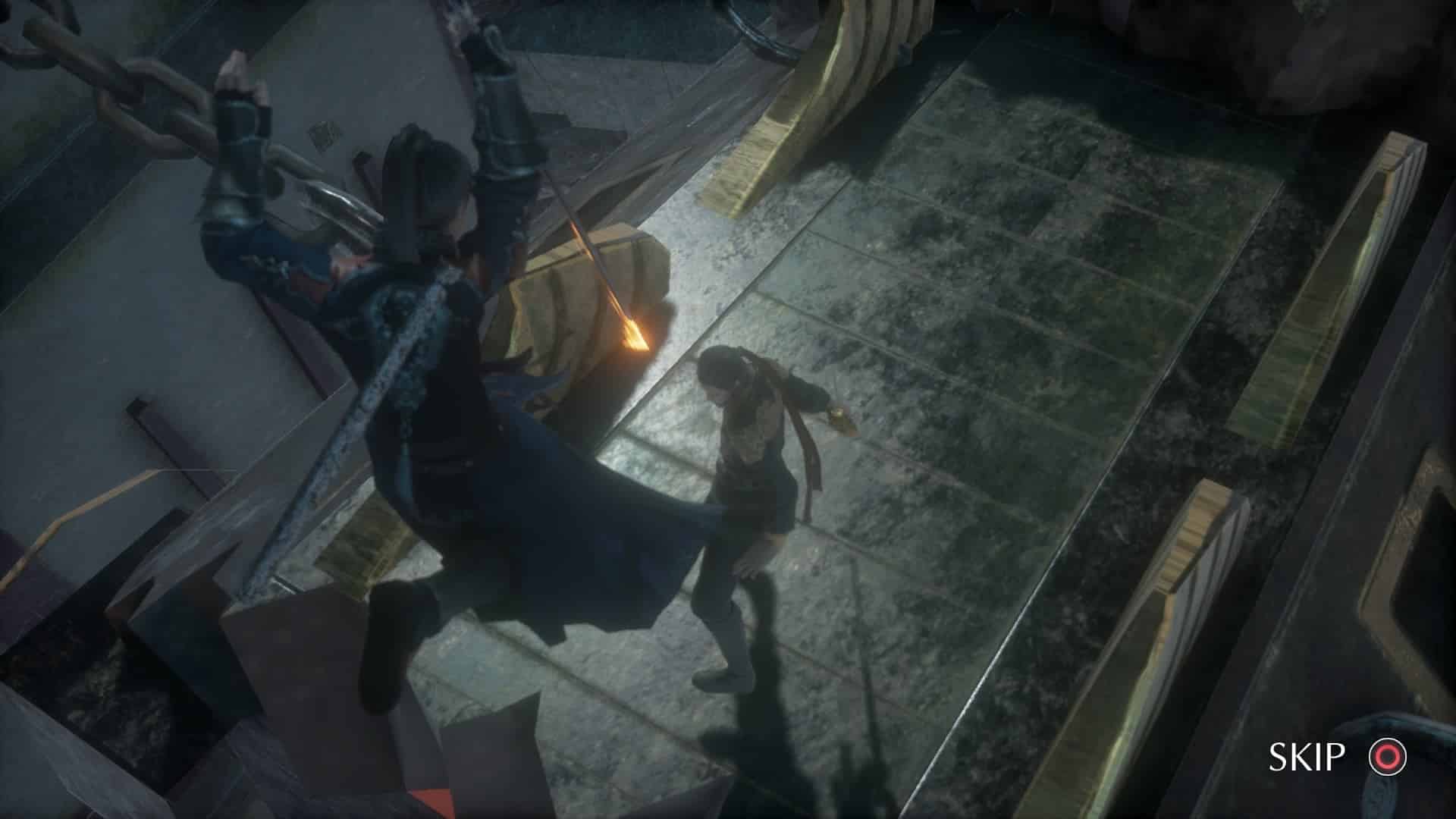 There are quite a few of these videos in the game, you can skip them but then the game will most likely crash on you, so just watch the videos and do the Quick Time Events that pop up every now and then, the scene in the screenshot above is one of them that crashed several times for me.

Some of the videos are pretty damn cool, some not so much and the horrible voice acting is there for a reason, yes it tries very hard to emulate old-school gaming and those Ninja movies from the 80s and for me, it succeeded just that. 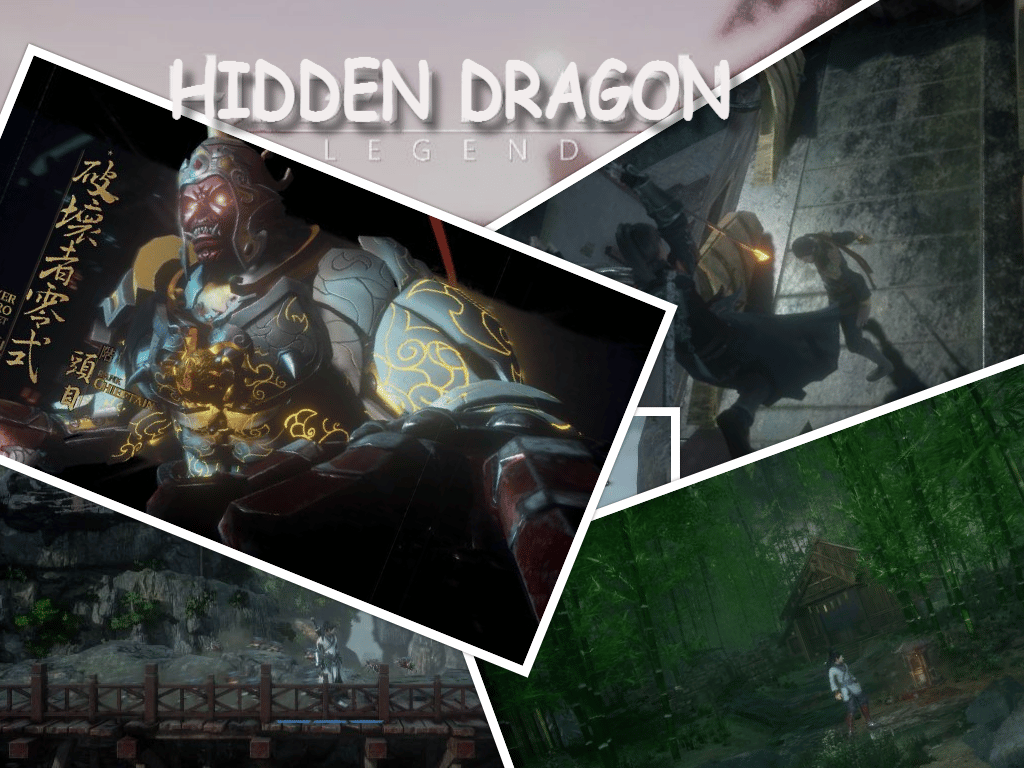 Is Hidden Dragon Legend a good game? , for me, it’s one of those “works for me” type of games where they could have been much, much better and still not got any higher score as this ain’t a classic and it will be forgotten over time too for sure. They could have polished it more, they could have made it more epic too but this is an Indie game which tries to emulate what we loved in the 80s and early 90s, this game would even have struggled on the PlayStation One as it’s an acquired taste. I really enjoyed this game and can easily recommend it to fans of the genre, but that’s where it stops.  Passable, wait for a sale, enjoyable but nothing to write home about.