AmiTen is most likely best known for the controversy around their game releases the last few years, I won’t dwell too much into that as all I can say is that the Amiga scene can be a horrible place when you get enemies.  I’d go as far as saying that I am quite surprised to sit here with 2 full game releases from AmiTen today, most people would have given up way before there had even been a beta release.

I wasn’t all that fond of The Dream Of Rowan really, I sort of expected more after the first few previews and for some strange reason I thought they would iron out all the problems before releasing the final game, to be honest, it felt like if they had not even looked at the problems at all so the preview was more or less identical to the final product (and this resulted in me not writing a 3rd and final article about the game).

Now, a few years later and one much nicer looking game is out, it is yet another platformer game and while it looks a lot better it still uses much of the same basic mechanics and so on from Rowan, my biggest fear was if this game would just be a reskin of Rowan…

At first glance, the game looks much better than Rowan, there’s a nice parallax scrolling which lifts the game quite a bit, there are loads of enemies too now, the game is “at best” more of how i expected Rowan to play which means they have learned from that project. 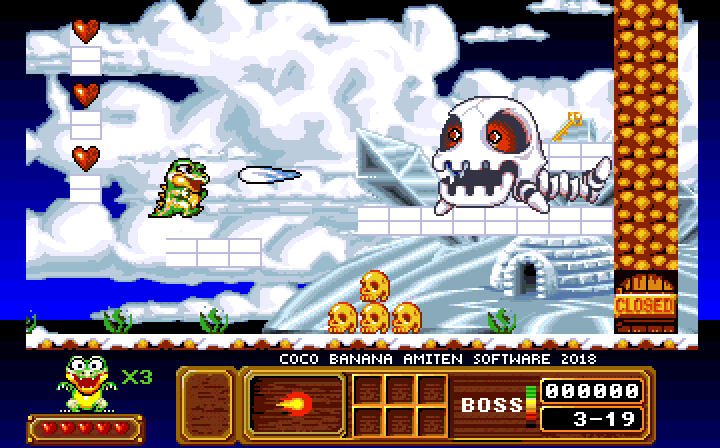 There are a few odd things with the game and more so the game mechanics, the music tries really hard to be something it ain’t and therefore it ends up being a mostly bad and a bit ok (world 3 music is one of them), the boss fights, for instance, plays ok enough but the music there made me reach for the mute button.

The thing with Coco Banana is that yes it might look good in pictures and in videos but it just ain’t fun to play, not as fun as it should be anyway.

The reason for it not being all that fun to play is down to how the game is laid out, you scroll a few screens, then you scroll a few more and all you do are shooting enemies and picking up stuff, yes that doesn’t sound all too bad indeed but there ain’t any missions except for finding a key and maybe most of all there ain’t any player feedback to what you are doing which means you will most likely just go into zombie mode while playing it until going bored of it. 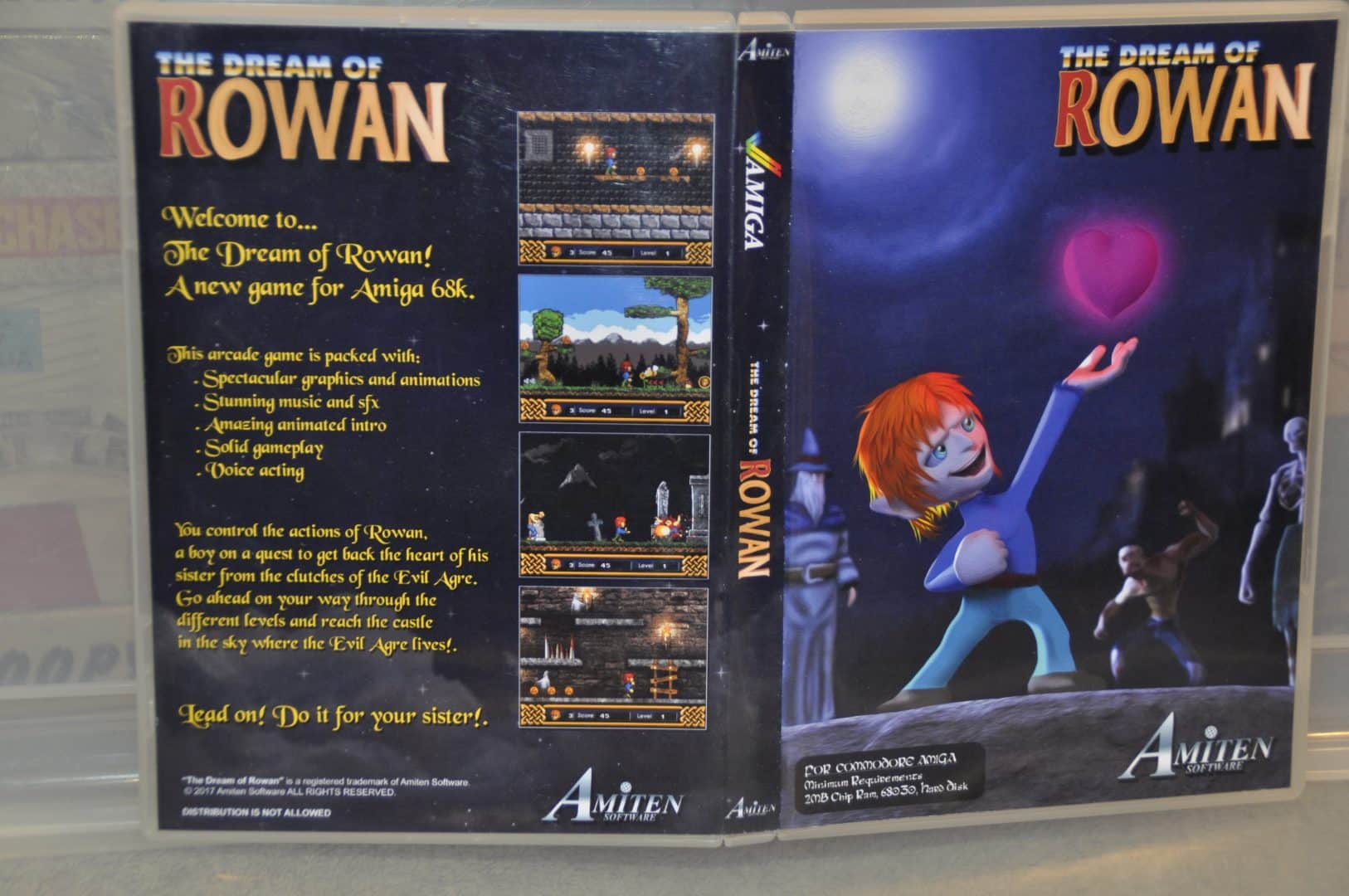 What about the Box then? Well, first of all, it has to be mentioned that the Dream Of Rowan Box was pretty decent really, a nice DVD box with a good mix of colours and it looked rather good all in all. 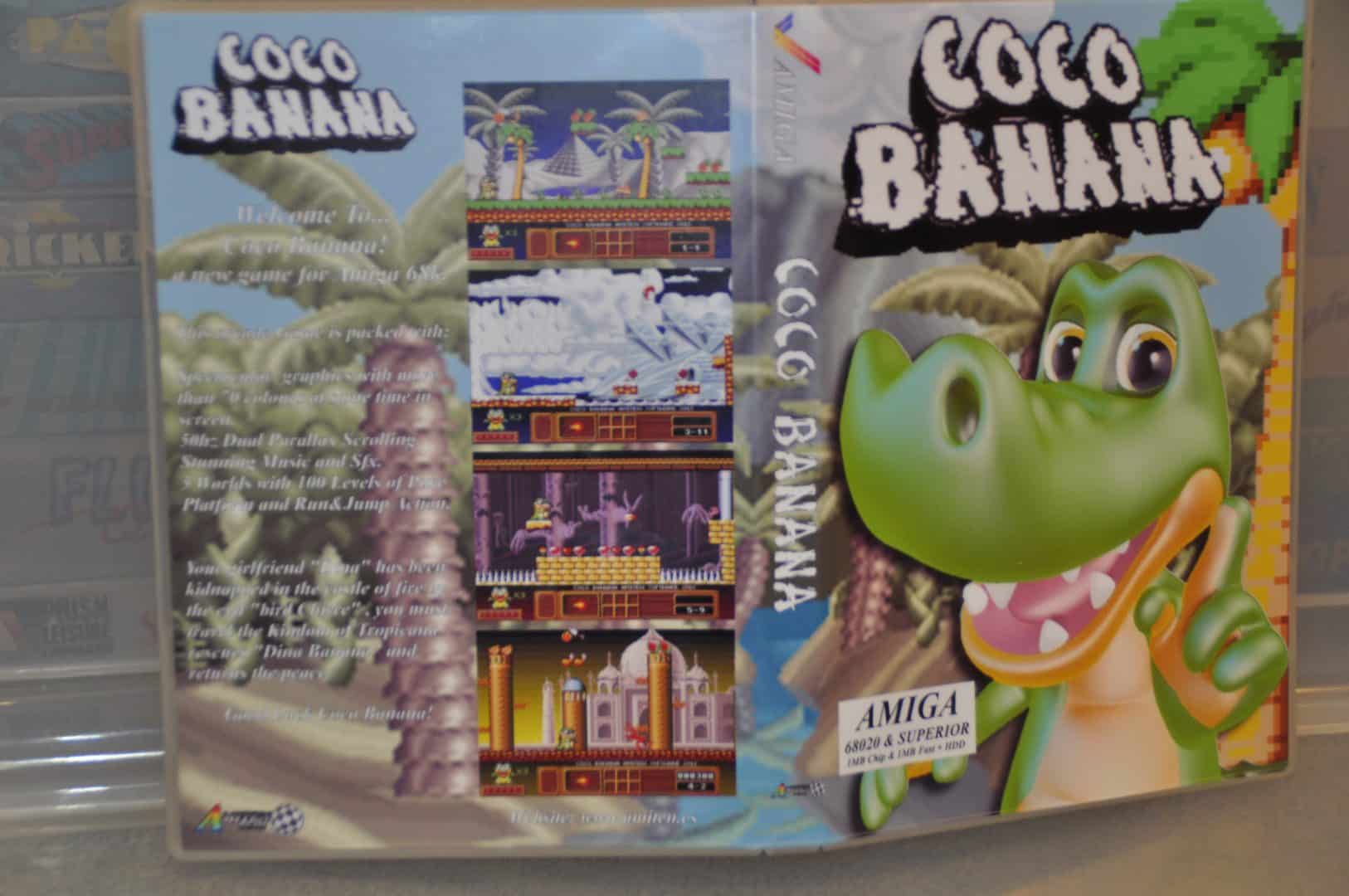 The Coco Banana DVD Box though looks great at first but once you take a closer look then you notice the backside colours and how hard it is to read the text, another complaint is that the box really doesn’t follow any standards either which is a common thing on Amiga these days sadly. 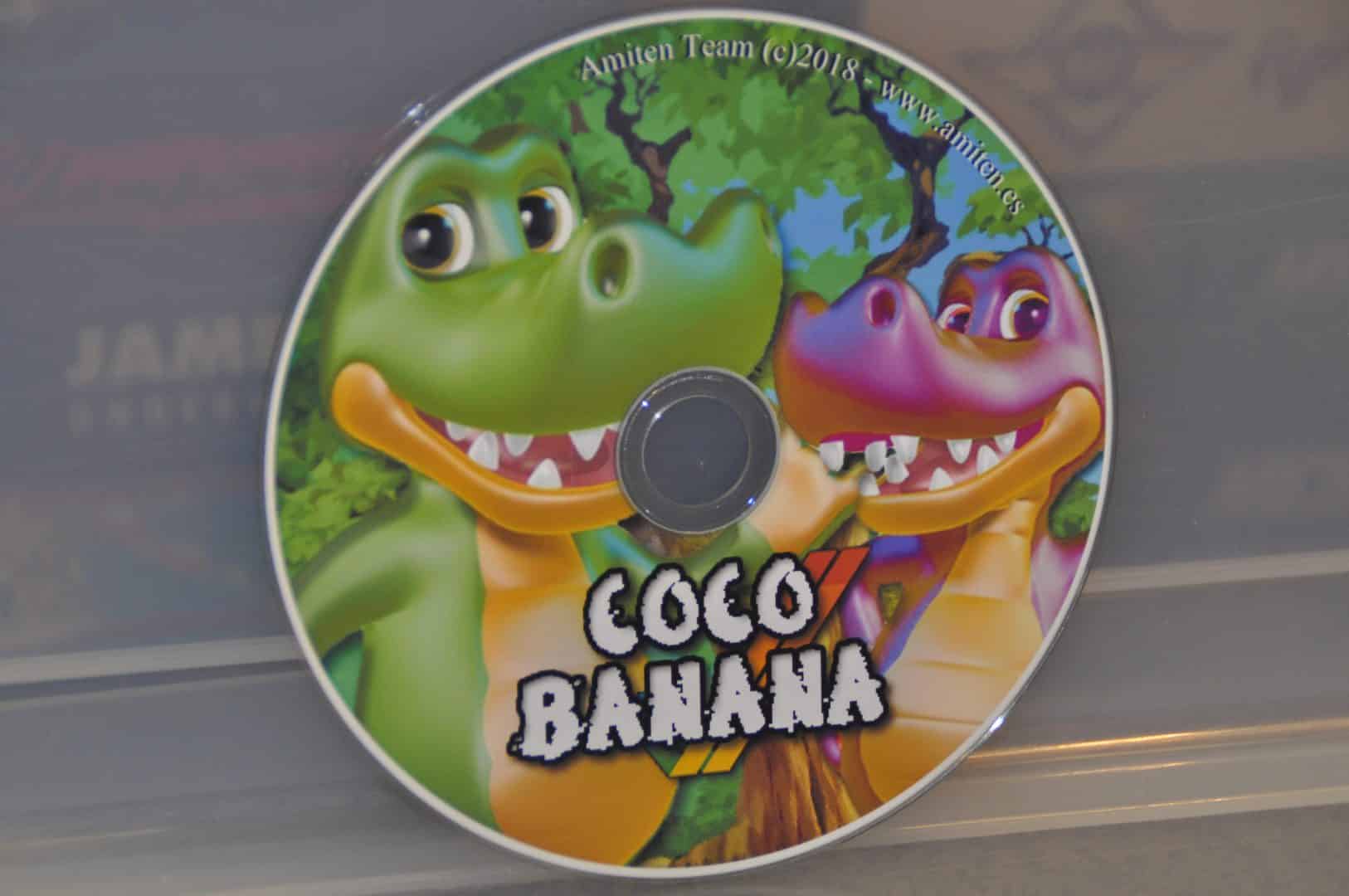 The game CD looks good too but for some reason, it is just a CD-R with a label on it…

There are 5 rather big worlds, all with the typical styles like Sand, Snow, Castle and so on, I liked world 3 the most which were a snow level with a rather cool end of level boss, but with that said i also enjoyed the last world quite a bit, the music was rather catchy there and for some reason I felt the gameplay was a bit better in that world compared to the others.

Technically the game fails a bit, yes it is written in AMOS and there are limitations because of it but the game requires a 68020 and 2MB of Ram, the strange part is that it requires 1MB Fast Ram and 1MB Chip Ram which means that the game won’t work on a bog standard A1200 nor CD32 which is sad, I ran the game full speed on my CD32 with the SX-1 add-on but that got a ram upgrade (and an HDD).

AmiTen have grown a lot the last 5 years for sure and when you compare the efforts and look at the sheer amount of time and love put into the projects is when you realize that these guys do it for themselves the most and that is fair really, they never aimed for AAA standards but they did aim for something that many can only dream of, doing 2 full-sized games on Amiga. 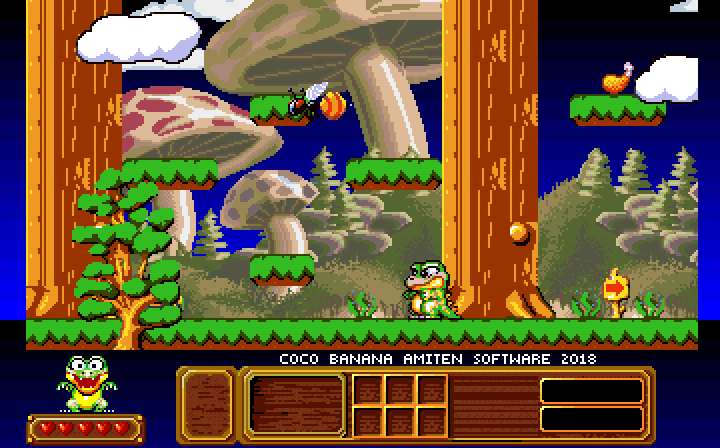 At the end of the day, you have to look at Coco Banana as a Public Domain product that does cost way too much for its own good, it was easy for most Amiga gamers out there to support this project because we need more stuff on the Amiga but I have a feeling that their chance has run out after 2 full price releases now, most won’t pay a premium price for another PD game in the future. If it fails then it is easy to blame all the controversy around the team but in the end, these AmiTen guys do a lot more stuff for and on the Amiga than most of the people out there that make the noise. Should YOU support AmiTen and buy their games? Well, I have to say both yes and no really, AmiTen needs to lower the price quite a bit to be attractive again and right now i think they should focus on shifting copies and try to repair their reputation instead of doing a new game… 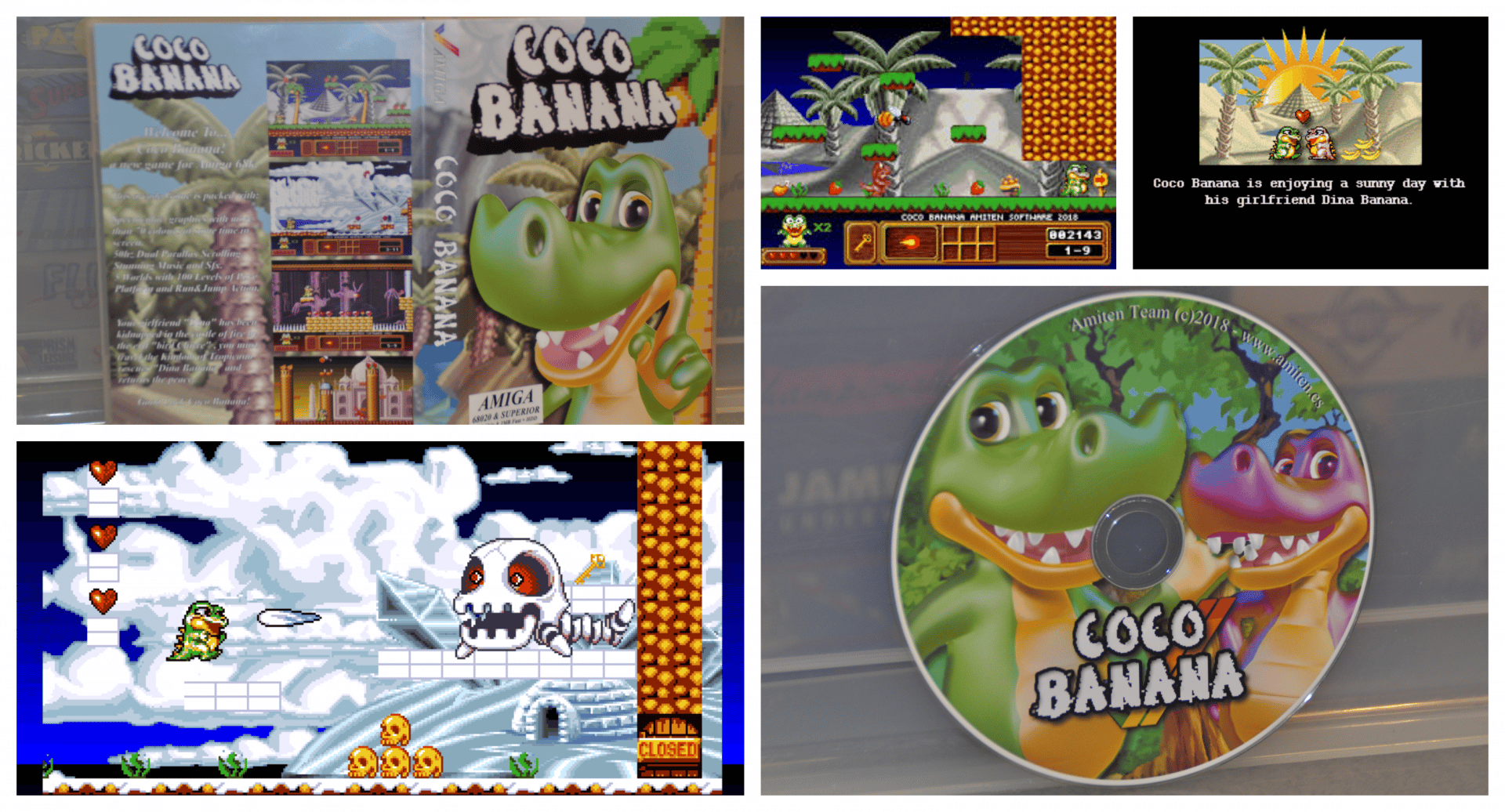 I wish Johnny, Luis and Dani the best and I am looking forward to their next project (if any).

Screenshots are from LemonAmiga (you guys are a lifesaver, thanks!) as well as Amiten’s page, box shots are from my own collection.

2 thoughts on “A Look At AmiTen’s Coco Banana”