O Lord won’t you buy me a new Assassin’s Creed?

My friends all play Call Of Duty’s, I must make amends.
Worked hard all my game time, with no help from my friends,

So Lord, won’t you buy me a new Assassin’s Creed?

Assassin’s Creed III (or was it Revelations?) was the first AC game that i did not enjoy, back then i decided to not get more games in the series yet i went and bought Black Flag for both PS3 and PS4 and i also went and bought Unity. AC Unity was the last straw for me really, the game felt ok enough but the poor framerate and the glitchfest were enough, they rushed and ruined a game that could have been awesome. I know that AC Unity has been patched and fixed since release but i played it 2 months after launch and back then it felt unfinished and nothing like what was teased earlier at E3.

So how come i went for Syndicate and even more so an expensive collector’s item? Read on…

So here it is, huge box and gobsmacking nice to look at. I have no idea why but these collectables seem to get bigger and bigger by the day, i want em all but i am running out of room and worst of all is that next year’s boxes will probably be even larger. 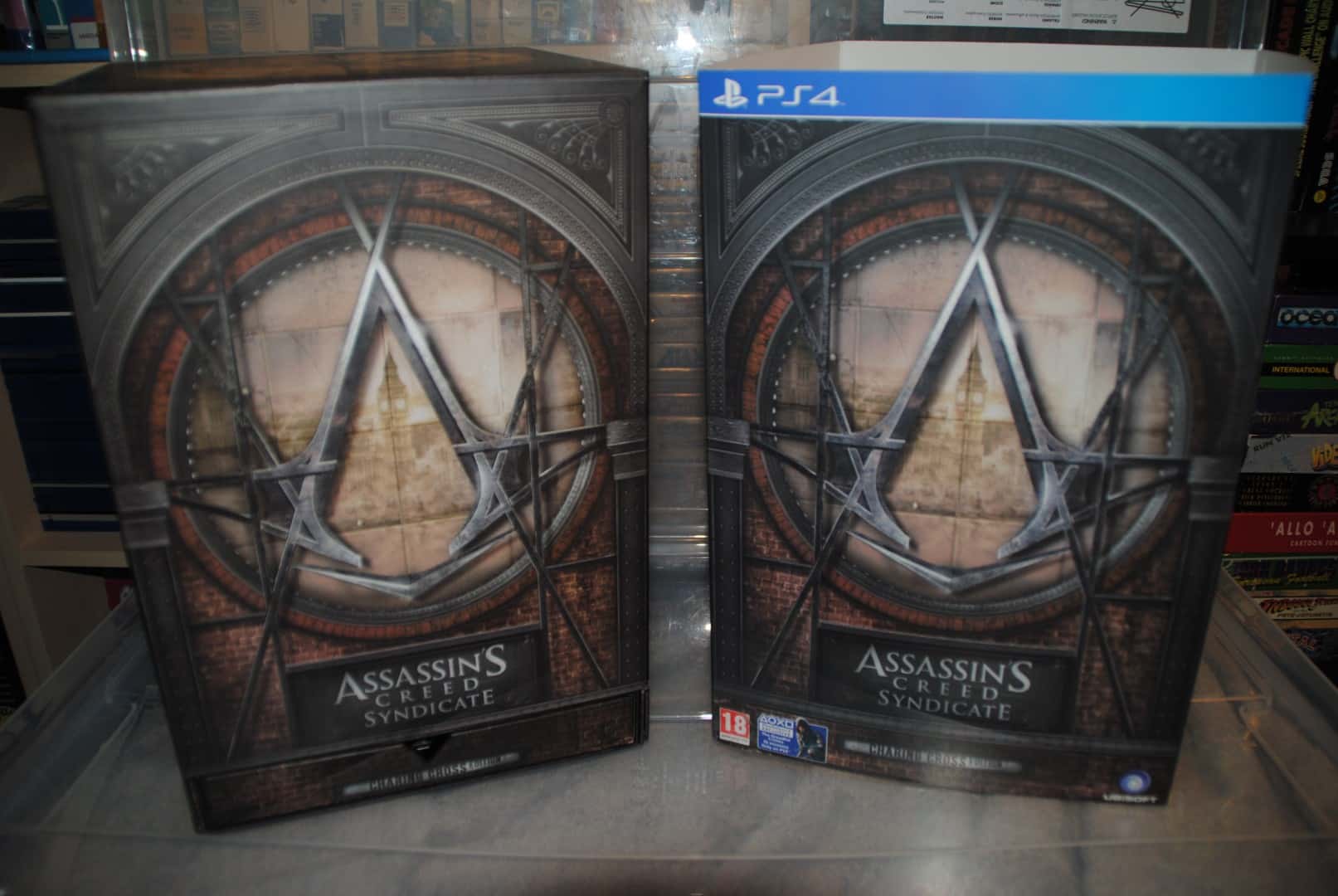 Very nice box design here with the outer dust cover is identical to the inner box and still useable after you unpack it ( Watchdogs Dedsec edition says hello..).

Ubisoft got skills when it comes to their game box designs by now, they have done loads of crappy ones but by the looks of things they have managed to set their own standard now and by that i am not referring to their figurines only. 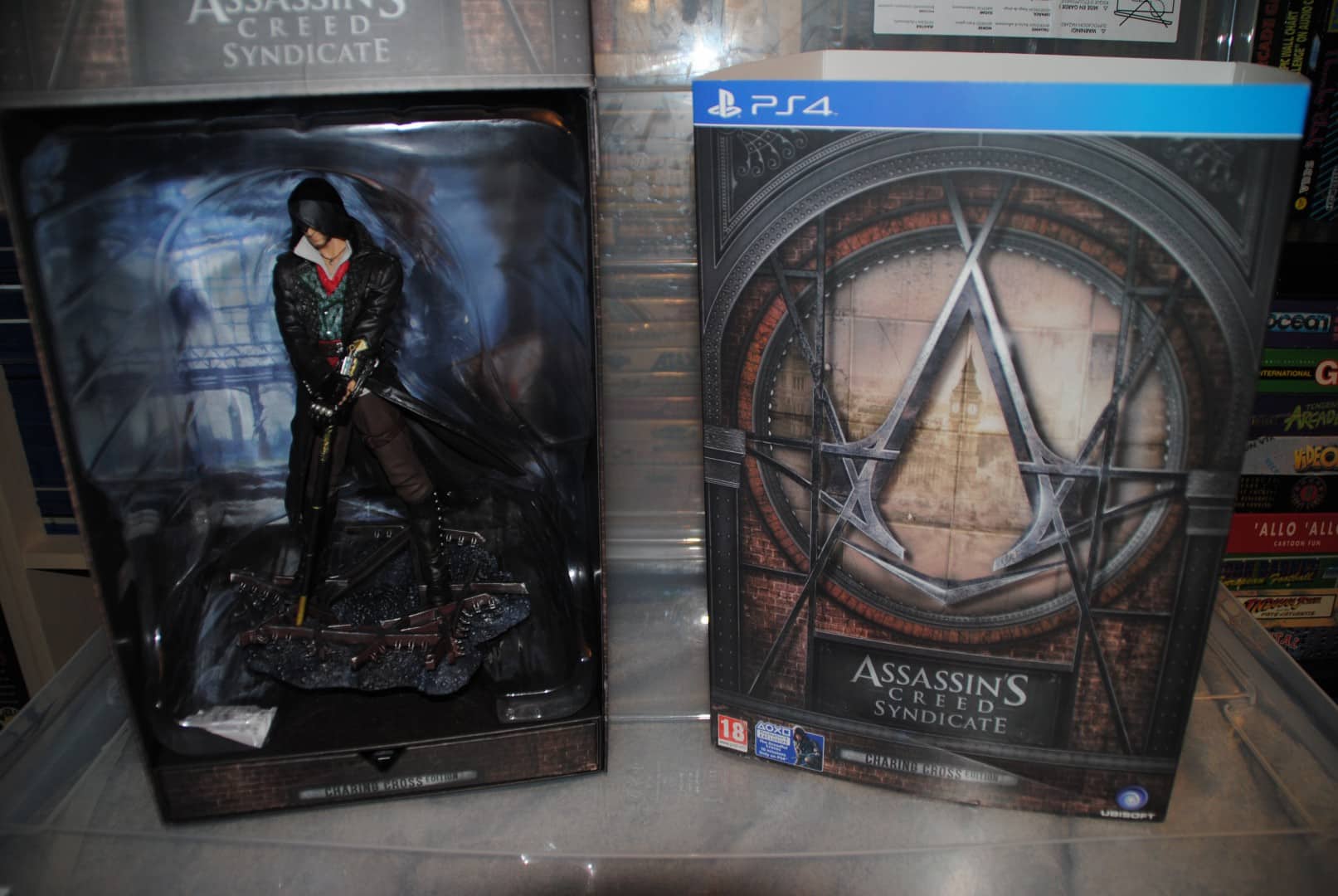 The picture above shows the figurine and next step of the box, the cover from earlier slides off as you can see in the top of the picture, yes it kinda felt like a Matryoshka doll but sadly it kinda stops at this step. 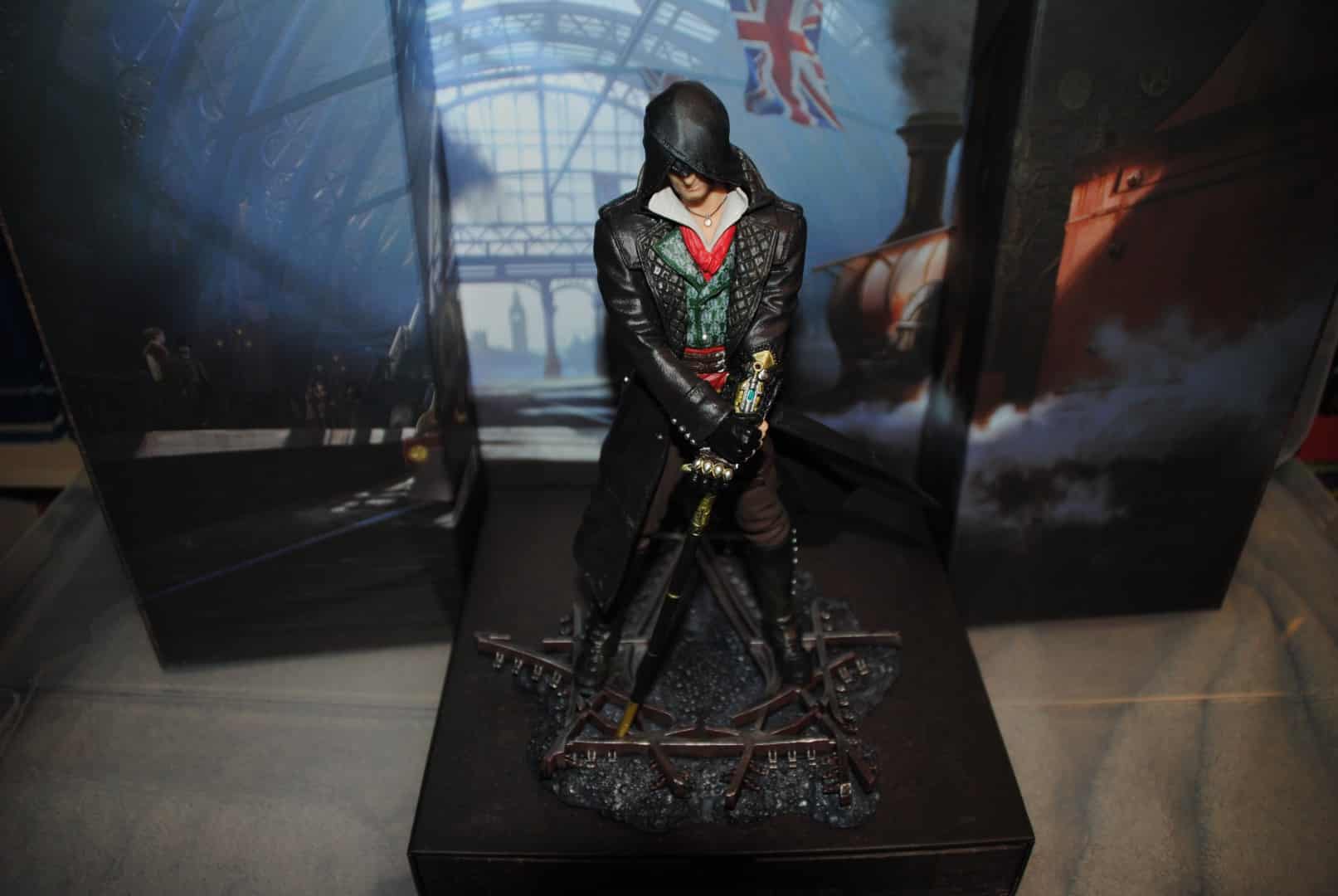 The box design keeps on getting nicer and in this step, you can see the sides of the box folded out, like wings or whatever. really cool and yes i do know there are other boxes that do this but has Victoria Station ever looked this good?.

Everything so far has been of great quality, feels solid and to be honest much better than expected.  Even the wings feel like they will last quite a while in both open and closed position.

I guess this is where i should cite another song, heavily edited for this post of course.

I can’t stop, stop collecting
This hobby it makes me high
I hear my self-screaming
I’m feeling so alive

Let this go on forever
I don’t wanna get off this ride
I can’t stop, stop collecting
This hobby it makes me high

The figurine is pretty darn good and i expected that to be honest, most if not all of Ubisoft’s figurines lately have been really good. It feels perfect and the details are great, i know that there are at least 2 models of this one and the only part that differs from them is the ground their standing on.  The other model has cogs underneath him. 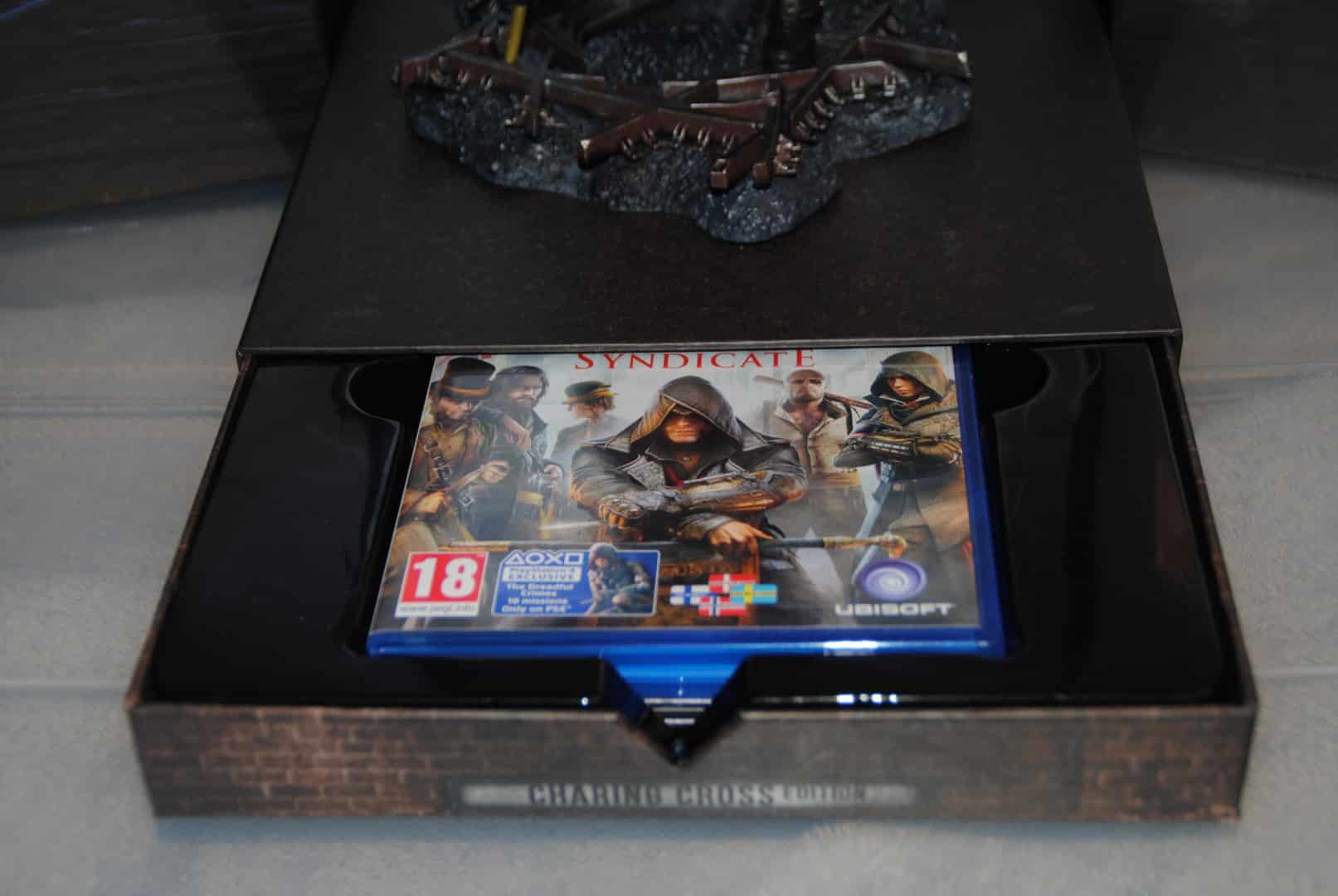 Here you can see the last moveable section of the box, a nice slideable drawer kind of thing where you can find the game, artbook and so on.  Quality is yet again top notch here and if there is one thing that will make this hard to find in mint condition in a decade then it is because of this drawer. The drawer sits firmly in place and require some force to open, not much but enough to wear and tear the sides and front of the box for sure. 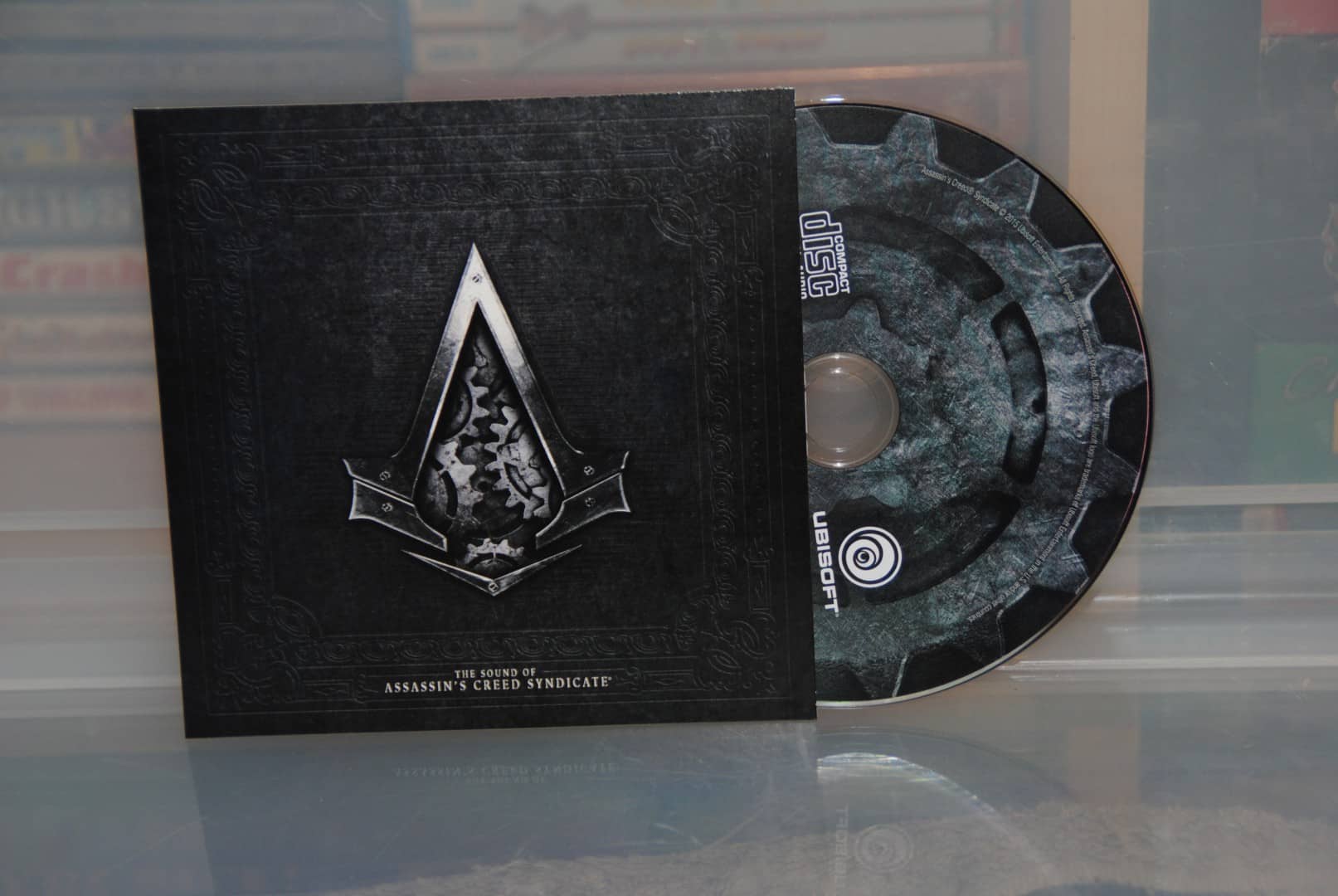 Yey. another CE with a proper CD and not just digital download code for music, i have yet to check it out but i will soon enough, really appreciate how some publishers still push these CDs instead of that boring DLC code that will most likely stop working a year or 2 after release.

This map is some of the reason why i bought the game, i mean, the setting in Syndicate is from the Victorian timeline (the 1880’s) and that is my favourite timeline ever in both games and movies. 1886 The Order is another game that is set in the very same timeline which reminds me that i have to do a review of that collector’s box too.

Ok, so what was the second reason for me getting the game? , It is set in London and from what i heard it was pretty darn good in terms of details too, so naturally, i had to get the game then.

Ok, so what’s next? an artbook of course. Lovely crafted and the binding is yet another nice touch with its raised AC emblem. The artbook is most likely a cut-down version from a larger book but unlike the Nathan Drake Collection book this one felt a bit more complete, but then again this might only be because i have not seen another Syndicate book.

The game box and disc together with some flyers and DLC codes, Ubisoft has as always bundled exclusive DLC in the Collector’s item box and it is easy to see because of that “Not to be sold separately” print.

Oddly enough the season pass is not included with this box, only a flyer for it. No special price either. I will not bother with buying a pass for this game although that Jack The Ripper DLC is mighty tempting. 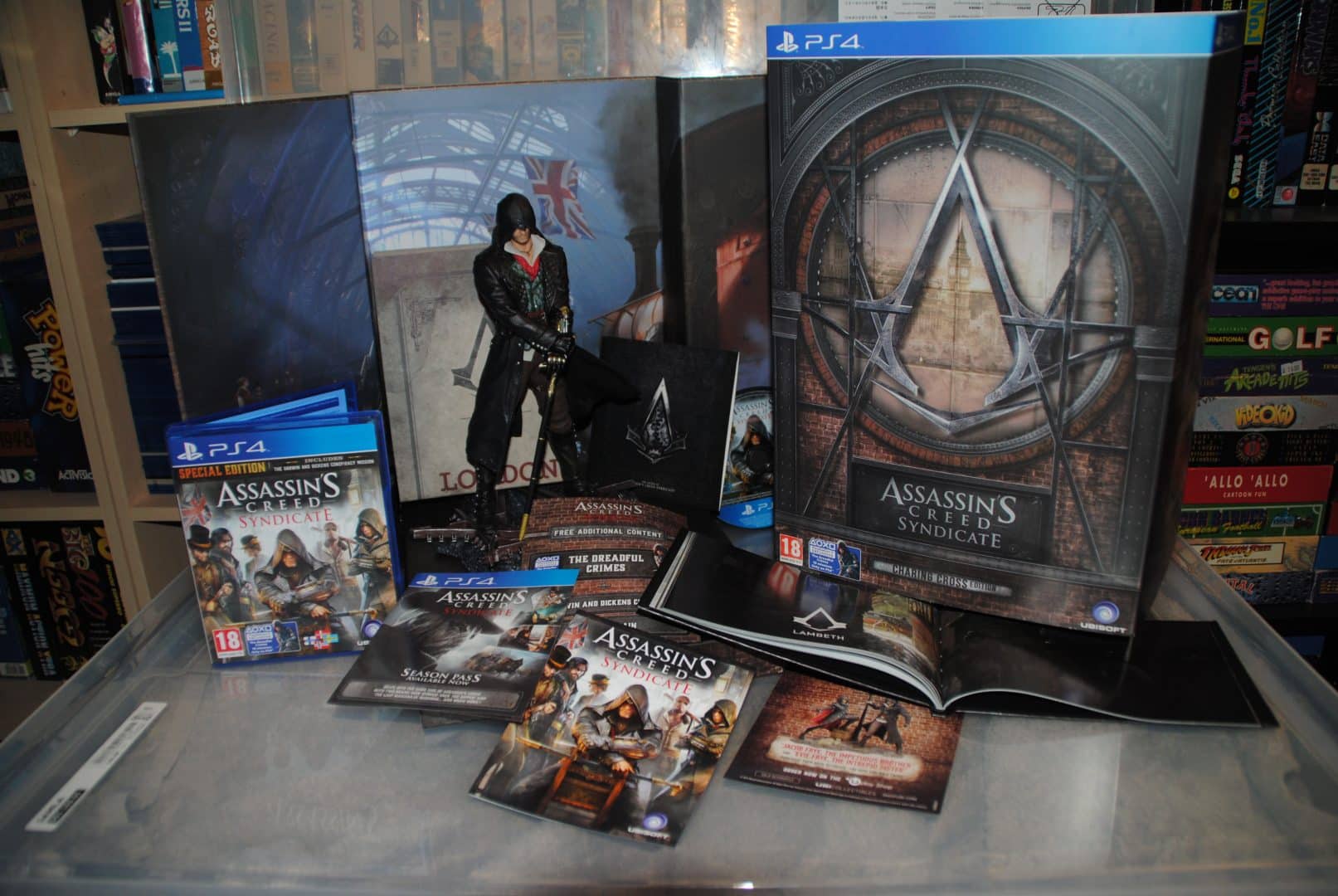 Here you can see all the goodies that come with this edition, a great bundle and one that will look awesome on my shelf.

So what is the main reason i got this version/box for?, The price was very good as i somehow managed to stumble over a cheap version from a pre-order that wasn’t picked up, or rather cancelled and i only had to pay the rest of the amount which was less than buying a standard edition.

So, Cheap, Victorian timeline and it being in London was the reasons for me getting the game.

Remember how i have reviewed boxes and stuff before and not tried the game? , well this time around i can share that i have completed Syndicate and that i am not all that far from a platinum trophy. I have to share with you guys that i love this game, yes the graphics have been “turned down” but the details are still there and most of all the framerate is much better now compared to Unity for instance.

The story in the game is solid enough and while the game feels very little like a proper AC i still have to consider this as one of the better games in the series for a long time. Gone are all the annoying bits like “follow X while he talks and your controls are limited”, gone are the endless sneaking missions. 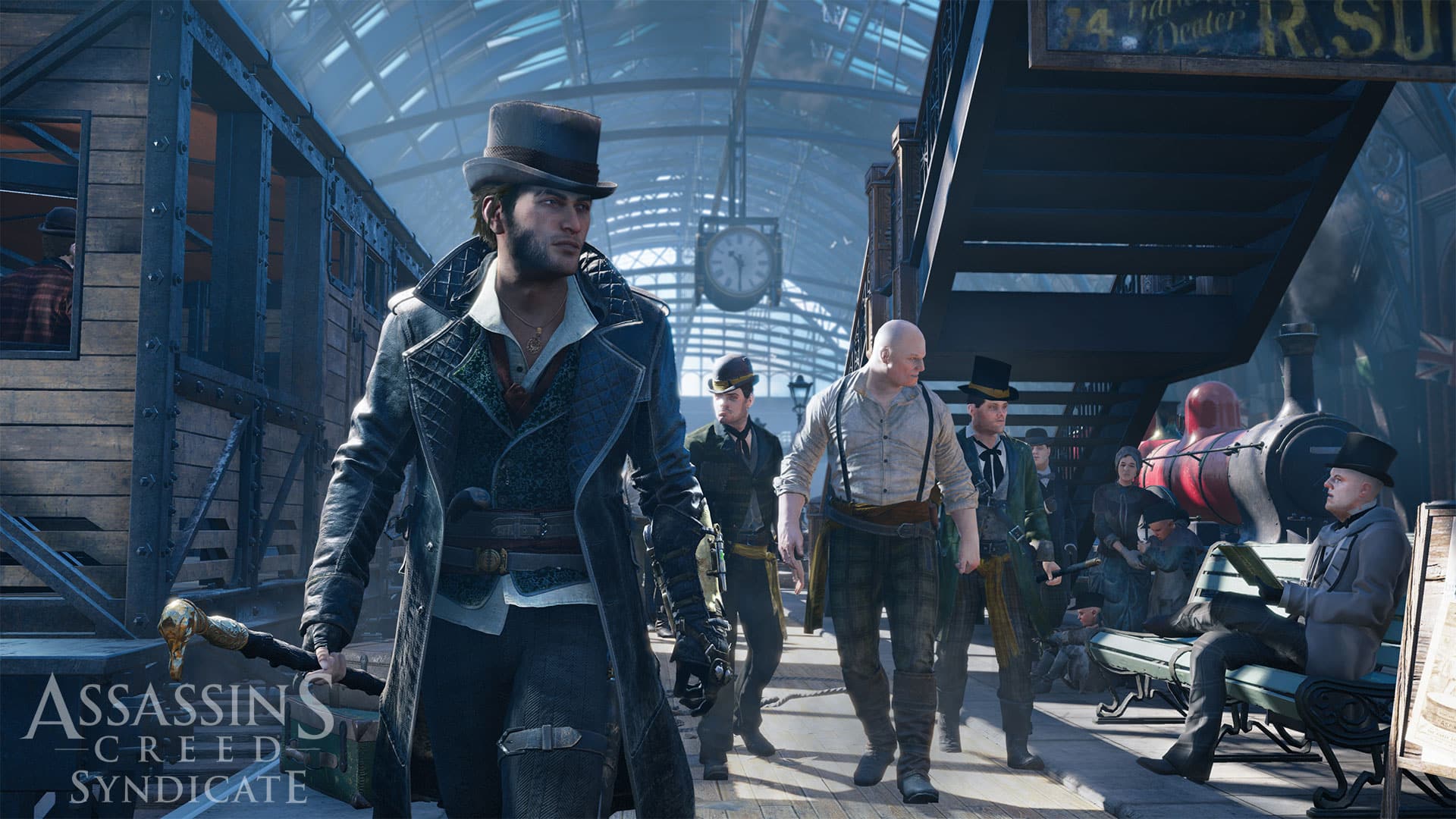 Some sad things are that Ubisoft has forgotten about what makes AC their best IP (today) and that is the Animus, there ain’t one in this game, well if there is one then it is 0.1% of the game.

I could go on about the game and do a review of it but this article is about the Collectors box and i will just leave the rest for another article.

Lyrics stole and edited from :

Thanks for your time and stay tuned for more box reviews soon.