Now and then I lay in bed and think about what to blog about next time, often classics pop up and many of them that were part of a time when I had loads of friends locally, and most of the time we played competitive games like California Games, World Games and so on, BOBO – STIR CRAZY was one of those that people remembered we played but never could explain what it was all about other than “prison game” and “peeling potatoes” and that it was hilarious. As always with 30+-year-old stuff, many have long ago forgotten the name of the game too.

BOBO Is A Character In The French Comic SPIROU 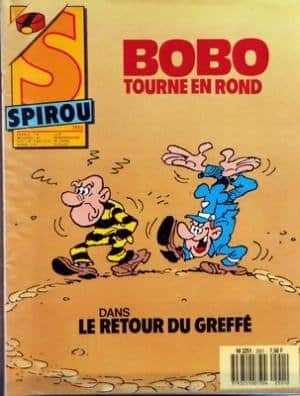 I never read much of the Spirou comics really and I certainly had no idea that it even was a thing back then (except for Marsupian) but as time passed I eventually learned that these comics had a lot of different characters that I saw in other forms like games and movies etc.

Ok, over to the actual game. I am not sure if this game came out for the Commodore 64 first but that’s where I first played it anyway, I loved the graphics there but wow I still remember the day I tried the Amiga version for the first time, the graphics felt like a real cartoon, today it still looks Ok and it would be unfair to say it has aged badly like many other games from that era (the mid to late 80s).

BOBO might not be as fantastic as some other games but people remember it as it was different from most other games at the time, just like North & South (which is also by the same publisher btw) which is one of those games that everyone remembers, I guess that is because it has been revived a few times over the last 30 years or so.

BOBO is essentially a party game with six events that will put a big smile on your face, it is simple but it works thanks to its charm and easy mechanics, it carries the craziness and simple humor from the comics.

Have You Ever Had Fun Peeling Potatoes?

The second mini-game is the reason I kept playing this game, peeling potatoes where you have to do it quickly and precisely. The control system can be a bit tricky to figure out but to simplify it, lob the potato up in your lap and waggle the joystick like crazy to peel the thing, and hit the fire button to throw the peeled potato into the kitchen, if you haven’t done a good job the guy in the kitchen will kick it back and you will have to start over again.

It works remarkably well. it is funny and original.

The Arcade Classic Tapper Get Swapped Out With Canteen Prisoner Feeding…

Love the concept of this one, it is the 1984 game from Bally/Midway Tapper where you serve beer but in BOBO you serve food instead, and to top it off you have to feed them.

Another event that works better than it looks, is tight (in an odd way) controls that will make you stressed, and to make it even more annoying is the sound of screeching doors and an angry man coming out and bitches at you (maybe a boss?), your mission is to wash the floor because prisoners and dogs (WTF?) go in and out with dirty shoes and leaves footprints/marks on the floor.

Sounds simple enough and it is one of the easier mini-games in BOBO but that door screeching sound is of RAGE potential.

The Trampoline minigame works well, your task is to bounce other prisoners over the wall. It starts with one prisoner but this escalates to several over time and it does get pretty hectic if you’re good at it.

You will need to get used to the controls to master this but a few goes and you will bounce them over the wall like a true master, in good BOBO tradition (like the rest of the game) the most logical

way to do a thing ain’t necessarily the correct way to do it.

The powerline mini-game in BOBO is pretty much straightforward, jump between 3 lines to avoid electric sparks(?), the draw distance is a bit on the short side to make it more challenging most likely, it works and it is fun but it is one of those minigames that get a bit old too fast.

As with the rest of the game it’s always trying to make you smile with charm and comical relief factors like animation, music, and so on.

The last and final minigame is the hysterical sleeping event where you have to stop the others from snoring and talking in their sleep etc, so basically, you run around putting their blanket back on and talk gently to get to sleep quietly so you can get a nice sleep without getting annoyed by the others, to top it off there’s a pissing pot (?) on the floor between the bunk beds that you have to jump over to not make any noise so the other prisoners wake up, easier said than done really as this is another one of those stressful events.

Great graphics and style, lots of cool animations that work well too.

The final verdict is probably easy to guess if you read the whole review, but yes this is a game that I love and simply can’t get enough of when playing it with family and or friends (6-player Competitive), BOBO is simple, funny and the charm is through the roof and probably the first of its kind before North & South popped up a year or so later. The game was a must-have back then to everyone that wanted a party game, now today there are better ones on the consoles and such but if you want some Amiga fun today, well then you can’t go much wrong by dragging this out of the cupboard or a TOSEC/Whdload collection.

2 thoughts on “The Games We Never Talk About: BOBO STIR CRAZY”