Welcome to yet another “The Games We Never Talk About But Should” article, this time I’ve decided to do another one of those games that I used to love back then but many others never gave a chance, the game is one of Vulcan’s Mega series games called The Strangers which was developed by ABLAZE.

One of the later Amiga games is this one which means a lot of people never got to play this one, it ain’t rare or anything but just one that just got forgotten sadly. The Strangers ain’t a technical marvel or anything but it does stuff that no other game like it has done on Amiga before it.

One Man And His Girlfriend = VULCAN SOFTWARE 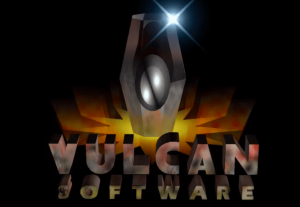 Vulcan Software started off pretty quiet back in 1994 but it soon got big and very popular among the Amiga gamers out there.

Vulcan was for the first few years just a publisher and developer name for a man (Paul Carrington) and his girlfriend (Lisa Tunnah), but the company eventually evolved into something much bigger.

Other developers were looking for publishers at the time as the demise of Commodore meant many publishers just left their planned stuff and never fulfilled their part of the contract.

Vulcan Software then decided to become a publisher for several studios, most if not all of them had no track record (note: had never released a game before) which meant the risk was high for Vulcan but they took a chance and they published no less than six games from external teams by the end of 1998.

If all the developers had finished the stuff they had signed up on, well, then it would have been 10+ for sure, maybe more as some were never previewed in mags etc I guess as it was either too early in the process or someone or something stopped them for being announced in the public at the time.

The Strangers was developed by a studio called ABLAZE back then but these days they’re known as Cypronia and they were one of the first commercial game studios to come from Slovakia (Still active today too), they also made another game on the Amiga and that was the insanely good game NAPALM (1999) which is the best Command & Conqueror clone for our beloved machine, expect a review on this very site at one point. 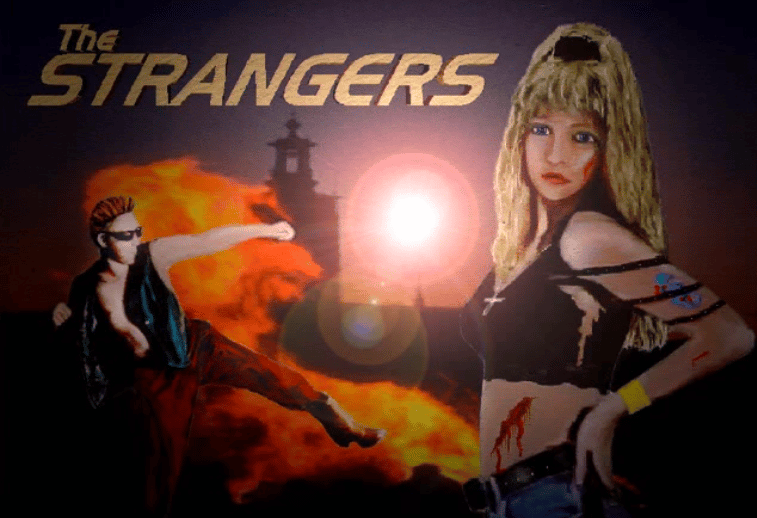 I have no idea how this picture idea came to fruition but at the time of release I wondered what this picture had to do with the game, I wasn’t the only one and I just had to ask Paul himself at one of the shows right after the launch of the game, well I don’t remember all of the stories but he explained that it was just a crazy idea he had when doodling with the Box art and loading screen so he decided to use his own mug as well as his girlfriend, Lisa, in the foreground.

It does look pretty cool in a really strange way, it works but errr, it is very cheesy and awkward and I bet it felt like an awesome idea at the time.

WHAT THE HELL DID I JUST WATCH?

The intro… is awful to put it nicely, I have no idea what the hell it is even trying to tell us, I mean, there’s a car chase that moves at like 4 frames per second and follows 2 cars, one of the cars eventually enters a tunnel and then the camera starts twirling and then when the car exits the tunnel, well it falls off a cliff and explodes… WHAT THE HELL?

Seriously, at release, I thought my copy was broken and was more or less prepared to return it and get a new one, yes the intro is that bad, it has no meaning and it ends in a way that made absolutely no sense at all (and while I would never have asked for a longer intro of this quality), yes one has to really wonder what went wrong when doing this intro and why it was even included in the final product at all.

Well, at least one thing was OK with the intro, the leading car was red and we all know that red cars are the fastest, right?

From HUH? To Awesome In A Heartbeat 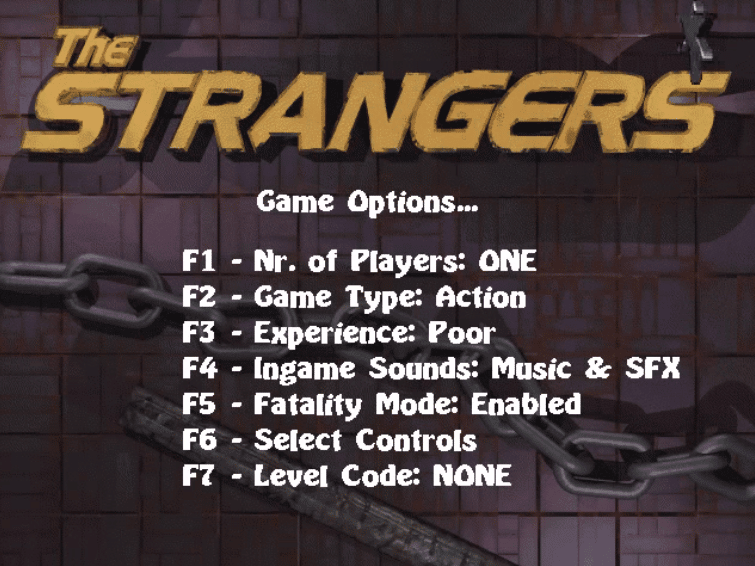 After that horrendous intro, we get introduced to a lovely story screen (in a picture below together with other story screens) with a cool sampled voice reading some story (err…) lines before the screen jumps to a really cool main menu which is presented with an animated icon as well as a cool background picture, a kick-ass tune, and a shitload of options (several pages actually) to chose from.

There’s a loading screen + music for all 8 levels in the game, they are all pretty varied and some of them are pretty decent while others are not at all. The concept and idea behind this are great and it’s cool to see they put this much effort into a screen that most would just skip as soon as it pops up.

I decided to not flood this post with too many pictures so I only took a few of these screens and decided to have more in-game screens instead.

Here you can see four of the eight levels in the game, the first thing most notice when they have played the game with me is the amount of blood in the game, I have a feeling that this was a mid-90s syndrome in gaming to add blood everywhere (Mortal Kombat, XTR and Carmageddon is a few of game).

One of the first things I thought of when I played this game back then (still do btw) is that it has like seven or eight characters on screen at the same time, sometimes there are even weapons or such to pick up and use too.

Oh, and yes, one more thing is all the blood…oh, I said that already, ok well there is both Sound-FX and Music at the same time + there’s a lot of blood in it too… err, ok you guys get the point.

Oh wait!, IS THIS THE REASON WHY THE CAR WAS RED IN THE INTRO?

JUMP, KICK, IT’S ALL IN THE MIND

A street brawler ala Target Renegade / Double Dragon needs one of those annoying jumps and kicks the motorbike off the bike thingies, right? Well, have no fear, The Strangers got that too but thank god it is over in a heartbeat and luckily not as annoying as most other games with this kind of gameplay.

Lovely locations across all eight levels really, some are dark and set in typical locations like the subway, the dungeon or prison and so on but it works and the graphic artist has at least tried to vary the location style throughout the game.

You can pick up stuff like barrels or weapons and so on in order to stand a chance against the enemies you meet in the game.

The fighting mechanics in the game is fairly limited and it does get a bit old quickly but it is still fun to hit guys lying on the ground or jump kick one of the bosses in the game and look at his avatar at the bottom of the screen reacting to it (note: BLOOD)

Moving around works well too, it is not like Renegade where you are more annoyed than not while trying to figure out how to attack the guy in front of you.

First There Was An 3D Rendered Intro That Sucked, In The End, We Got A 2D Outro… 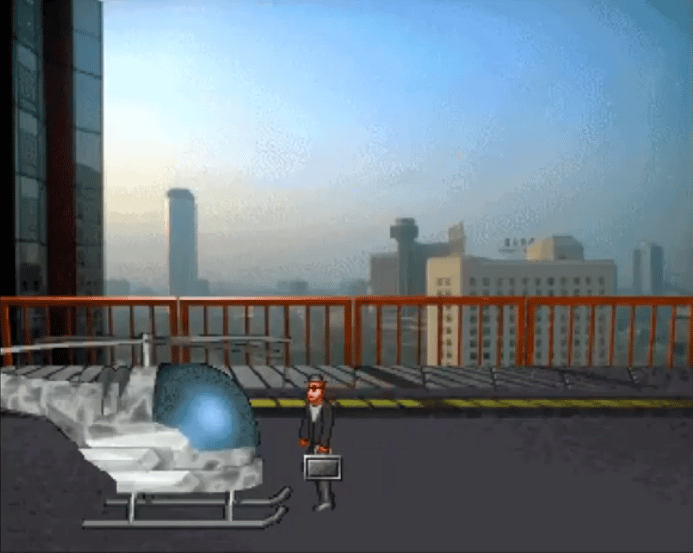 The ending in The Strangers is yet another odd one, I mean, there was a 3D intro, a 2D game and the ending is 2D and neither the ending nor the intro makes much sense in terms of connecting the actual game beyond that there is a bad guy somewhere. Few frames and over before you even realize it started if you never completed the last level (which is hard btw!), well you ain’t missing much.

What most people never realized back on release is that this game actually supports up to SIX players in Co-op/versus game modes, yes you will need a 4 player adapter (like the one from the Dynablaster box) which is easy to find these days thanks to there are a lot of sellers selling homemade versions of them for a cheap price.

The modes that are included in the game are the normal story mode, practice levels, deathmatch and a mode called Gang War, all of the modes more or less play as expected and in my opinion, the only mode that is really worth playing is the story mode, but that is all up to you guys what you want to play. 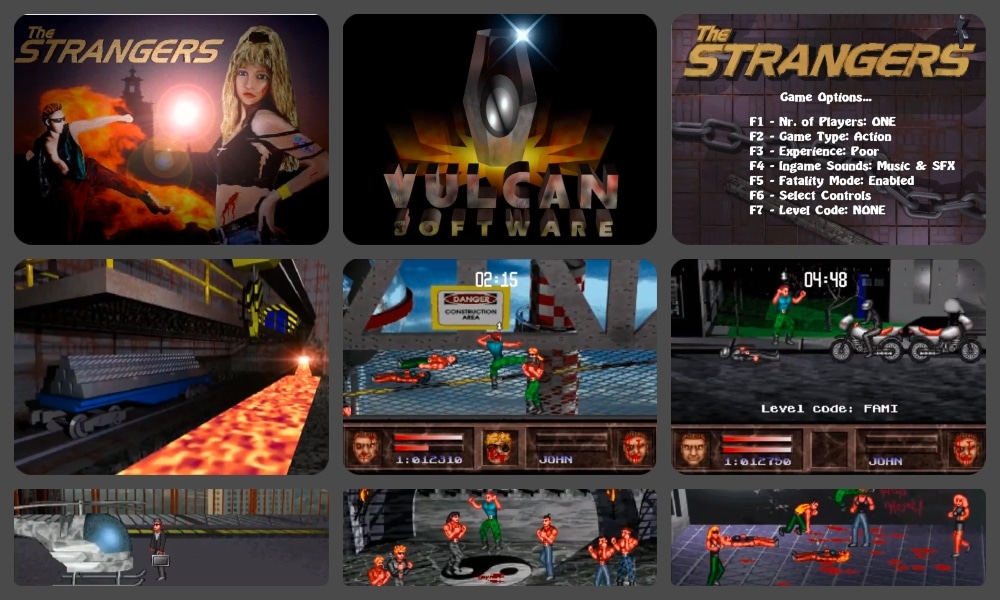 Did you scroll all the way down to this score or did you actually read it all? Well, I will sum it all up here anyway. The Strangers was the first MEGA SERIES game from Vulcan and at release, I just loved this one and had high hopes for the next game in the MEGA SERIES from Vulcan.  The graphics work but is far from great, luckily they are quite varied and try a few next things to make the player entertained. The music for me is the best part of this game, I love how they did a lot of different tracks and even put them in loading pictures, menu and in-game. Couch Co-Op was always a huge plus back then as I had friends locally who came over to play Amiga games while eating junk food and drinking beer, so yes it was essential for me to grab it as soon as it was out. The Intro is horrible and not worth your time, the ending is over before it begins. The difficulty level in this game is adjustable in the menu but some of the later levels in the game will piss you off for sure. Not tried this game? GO GRAB IT RIGHT AWAY!

Free Download is available all over the internet but here’s a location where got both the Floppy Rip version and the Amiga CD versions, go have some fun.

PS: Vulcan Software all of a sudden woke up last year after 16 years of silence, a new game is actually on the way, when and where is unknown for now.

3 thoughts on “The Games We Never Talk About: The Strangers”