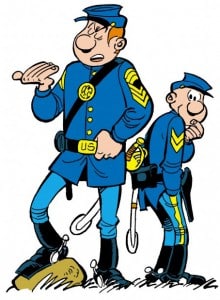 It is clear from the very first second that this game is not to be taken seriously, it is a comic relief based upon the American Civil war with characters from a comic series named “Les Tuniques Bleues” or something.

I guess that the name in English would be The Bluecoats.

These characters first showed up in the French magazine Spirou but eventually, they got around to get their own one.

A tiny trivia is that the series may look French and feel, but they are actually Belgian.

e game was created and published by Infogrames and was an Amiga exclusive at first but soon after an Atari ST version was released and once these 2 versions had taken the world with a storm, a gazillion of ports was eventually put out, there is even one out on iOS/Android.

There is a lot of ports and a few remakes of this game out there which i have not tried yet and to be honest i guess i never will.

Update: There’s also a PlayStation 3 and Xbox 360 version out now, both ports are both good and bad…  Not sure if i want to recommend them to others than huge fans of the original.

Anyways, here is my piece on the Amiga version from 1989:

North & South is first and foremost a strategy game but this is only if you look at it for a few minutes, it won’t take you long to realize that this is more of an action take on the strategy formula from so many other games that look like this and maybe the most known one is R.I.S.K.

North & South is best played in 2 human players, versus mode as playing it against the computer albeit fun can be a bore at times, oh and multiplayer couch play beats just about everything there is no matter which game, right?.

Since it is a Vs. a game this means 1 player on each team, it doesn’t really matter all that much which team you chose other than a closing picture and such. All animations are basically the same and to be honest, it doesn’t matter at all and it didn’t matter back then either (except for the flag and colour of the player of course).

The gameplay of the strategy part is straightforward, it is turn-based and the player with the most land wins the game. There are a few nice tidbits in here though, you get money by taking land but you get more money if you take land that is located near the train tracks. So the goal of the player should be to take certain land spots to get the most money.  The money is spent on troops of various kind (like in R.I.S.K.).

The menu system is well presented and quite out of the ordinary back then, humorous touch to every button press and it even “mocks” the anthems of various countries too.  Various strange options are in the game and among them is an option to disable the action stuff in the game, you know, the fun stuff.  This is done to make it more “strategy” i guess.

Tickling the camera dude in the arse is always a must, my 6-year-old son also think so, sometimes too much…  Wait, wait, just one more time, please!.

It is pretty obvious that there is a link in the graphics to the game BOBO – Stir Crazy too and it is also made by some of the guys in the same team (and perhaps comic owners/creators?), yet another funny and hard game.

North & South is a very hard game and sometimes very unfair. The arcade/action stuff pictured above is the most annoying part really but once you have played it enough then you will enjoy it more.  Fun stuff albeit frustrating and unfair.

The controls are made this way, it is meant to be hard as if it had been normal or easier then the game wouldn’t have been so fun to play over a longer period of time.  The developers of the game knew what they were doing alright!.

A nice touch is that it plays a certain sound whenever you move and if you listen carefully you will figure out the song, not very hard though, a nice feature.

Various versions of the arcade games are present in the game but they’re basically the same, therefore i didn’t bother to include shots of them here.

Anyone who has played the game probably remembers the Indian and his “UGH!” and maybe the ship? sound effects help this game to higher levels as it is somewhat silent but when there is a sound effect it is at least of top-notch style.

There are some iffy things about the game though and because of these i will never think of it as one of the best games on the Amiga,

Infogrames had a certain style to their games and while i didn’t buy all that many from them i still think highly of them. Infogrames was eventually grabbed by ATARI where they went on to make a lot of good PS2 games.