Doom, a love or hate franchise.

The 3D boom started for better and for worse, many very good 2D games in development got cancelled, many games started to use pseudo-3D effects and maybe the worst thing of them all was that most 3D games at the time were absolute pants.

I never did like Doom much, to be honest, i didn’t eat the 3D “First Person Shooter” hype before Quake arrived, but when that came out, well let’s just say that i wanted Quake on the Amiga badly.

Oh well, its been 20+ years already so a reboot was about time if you ask me. 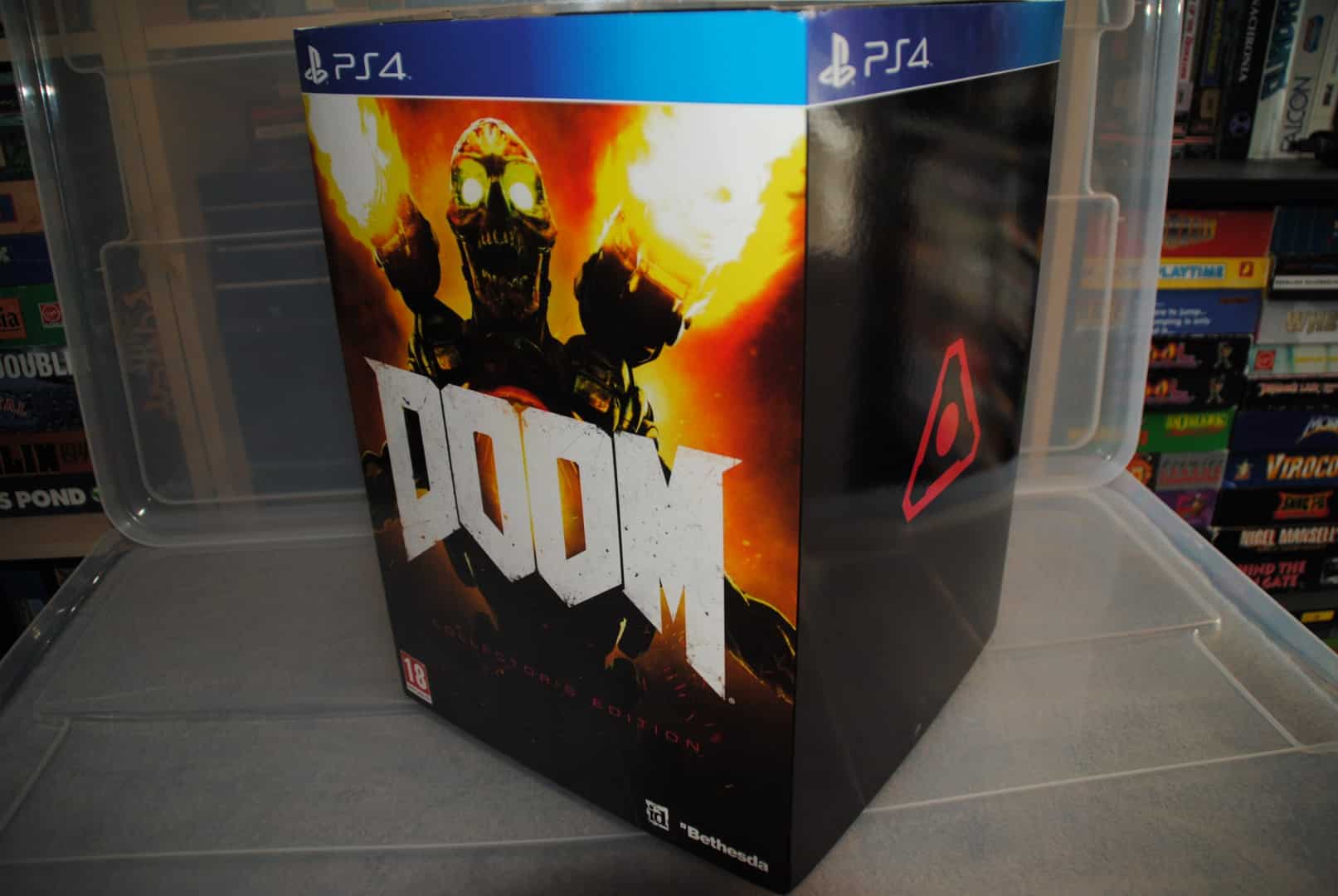 The box screams buy me, buy me! , it may not illustrate the game all that much but most games today share that very same design. 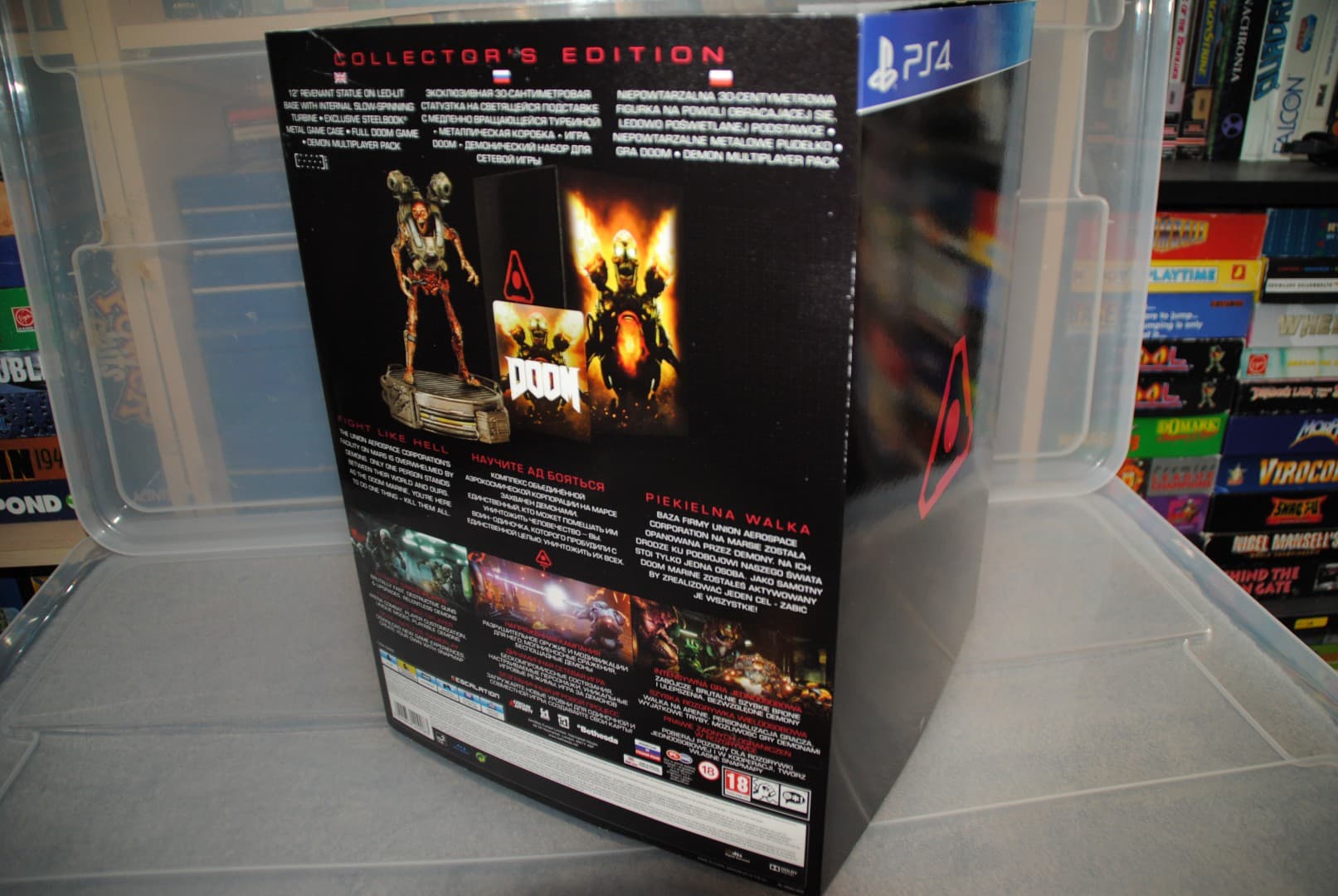 Normally i would include both front and box in a gallery at the top, but this time i want to mention the size and design of it.

the box is huge, colourful and the back of the box is designed in a very good and clean way.

When i opened the box i got presented with this ” silly” message, i mean, who the hell opens a collector box in a rough and abruptly way?.

i guess many just buy these things because they got the money to spend on it and all that matters is just the figurine, not for collector purposes.

Styrofoam box for the figurine, embossed DOOM logo on it too, looks great!.

The figurine looks fantastic standing there in the box, huge is it too.

batteries included too, hmm what do they do?

I managed to find the power switch after a few puzzling minutes, it was hidden on the side which may not sound too hard right? wrong!. The switch was hidden behind some plastic, some really cool plastic which made the switch hard to see.

With the batteries in place and the power switch on, a red light turned on.

So, the light and figurine looked a bit cooler now.

A few moments later i noticed that the fan underneath him was supposed to rotate, i tried to fix it without any luck.

As usual, i decided to do many closeups of the figurine, as seen above – it looks incredible.

The details, the design and colours make the posture of the “alien” look really scary.

He carries a huge gun on his back, his head is red as hell.

His stomach and umm scrotum look way cool, cables coming out it and attached to his legs(?). The details are impeccable, the colours too.

It is the coolest contestants and colours i have ever seen on a figurine, well at least of those i own.

The pictures above covers his legs and hands, looks great!.

I have tried to use wide angle and overfocus here, but for some reason, my camera refuses to do the usual wonders that i have done before.

More close-ups and attempts to view more details, while the figurine is huge i still struggled to do some awesome pictures.

I have some good news though, my camera started working as before now, why i do not know but my guess is probably my lens that is acting up.

The box contains a wonderful steel box, absolutely one that i will have on display.

The box includes very little beyond a Dishonored 2 leaflet… 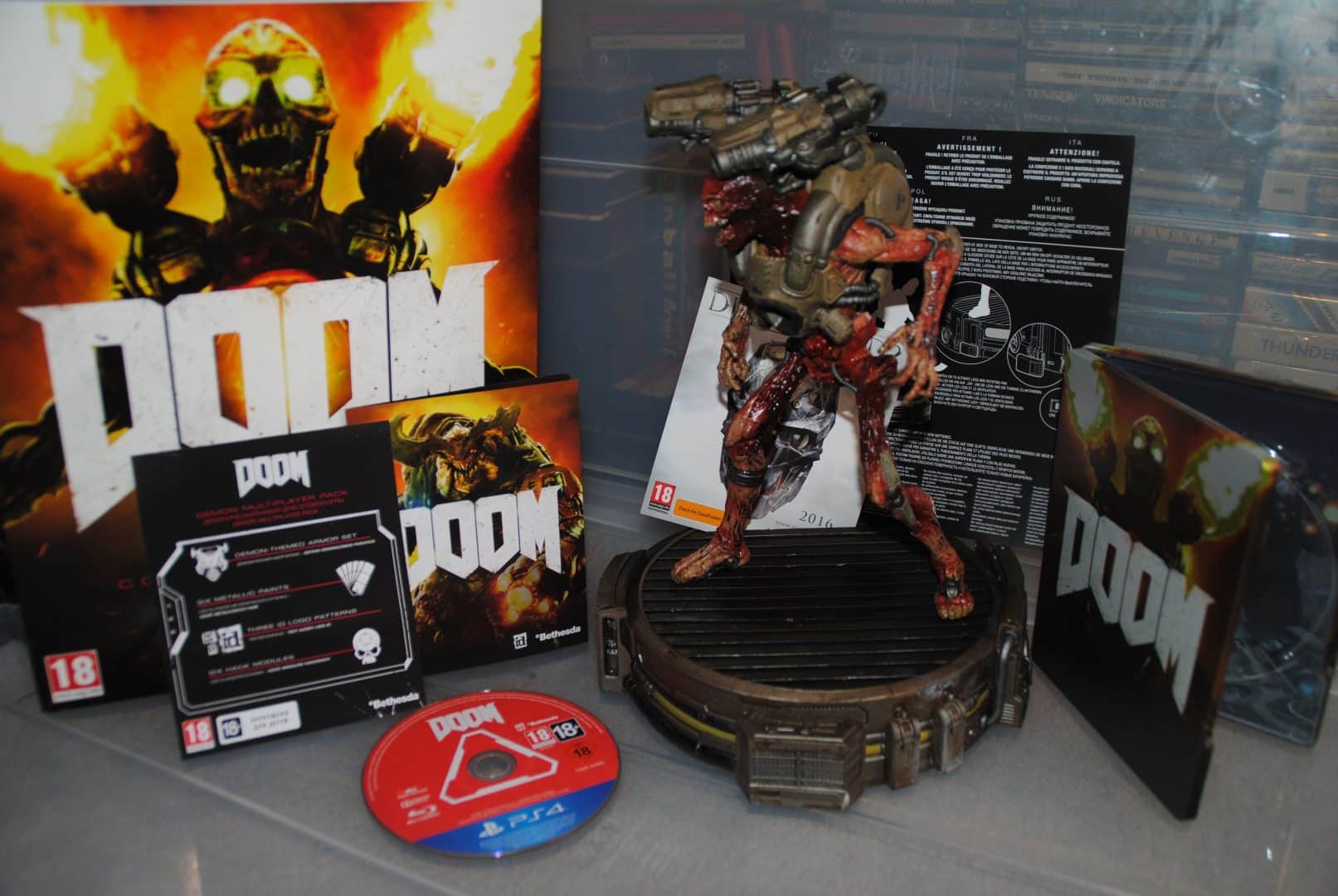 Here you can see everything in the box, an amazing steelbook and figurine, but beyond that, there is nothing else, no cool online codes including something good for SP or MP.

Was there something else planned? Why not include the basics of today’s Collector Boxes?

I won’t complain though as this box includes some of the best stuff so far this year.

Shame that the fan under the figurine is broken, i guess i can repair it myself, but things like this piss me off, and i find such issues disappointing.

A small check around the interwebs mentions a lot of other people having problems like the fan not working, the plastic in front of the power switch not being able to remove etc.

3 thoughts on “A Look At Doom Collectors Edition”