Hermes is actually a Dreamcast game with AmigaOS4, MacOS-X and Windows versions on the same CD.  The Dreamcast version can be seen as the main dish here i guess, the rest as side dishes, as it is mostly seen as a Dreamcast only title because it is the only format the game autoboots on.

The last attempt of this that i know of was Leona’s Adventure but as you may know, this project failed to materialize on the Amiga (see my articles). 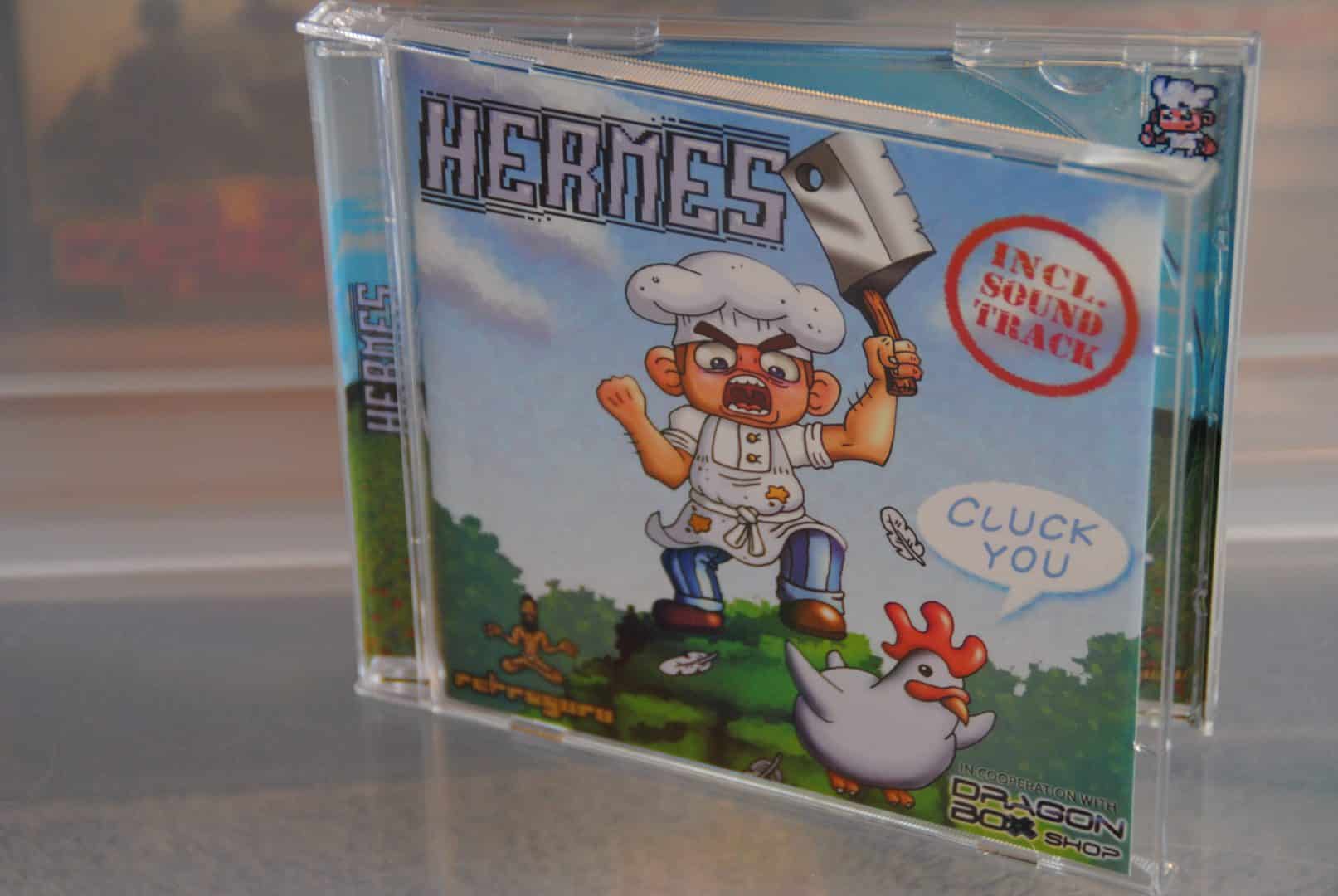 The game comes in a standard jewel case and not a Dreamcast one sadly, it does look great anyways due to it being transparent and maybe best of all is the colour design.

I guess one shouldn’t complain as its been way more than a decade now since last time i saw a new Dreamcast case around. 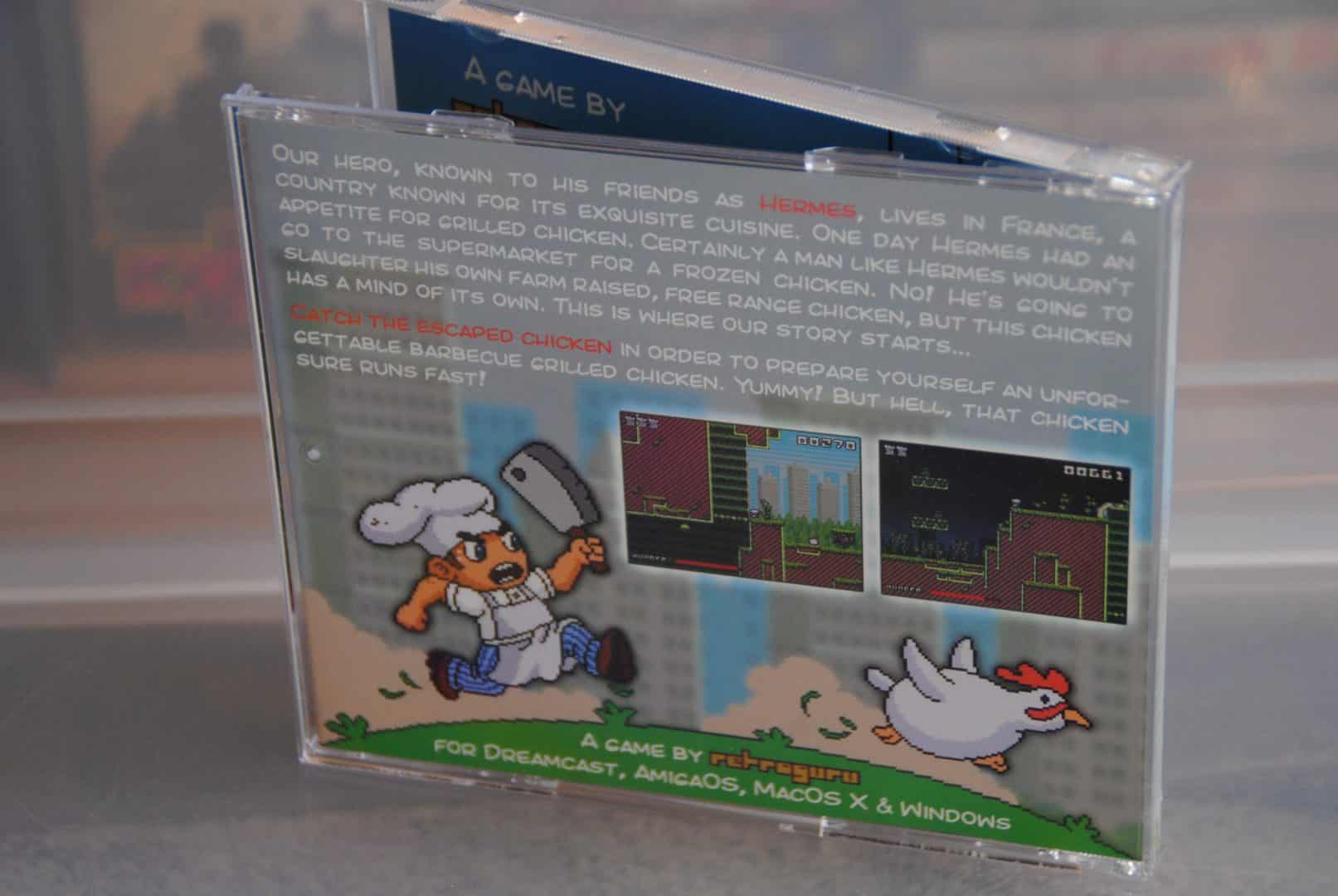 Oh and seeing that AmigaOS name there certainly doesn’t make it less attractive. 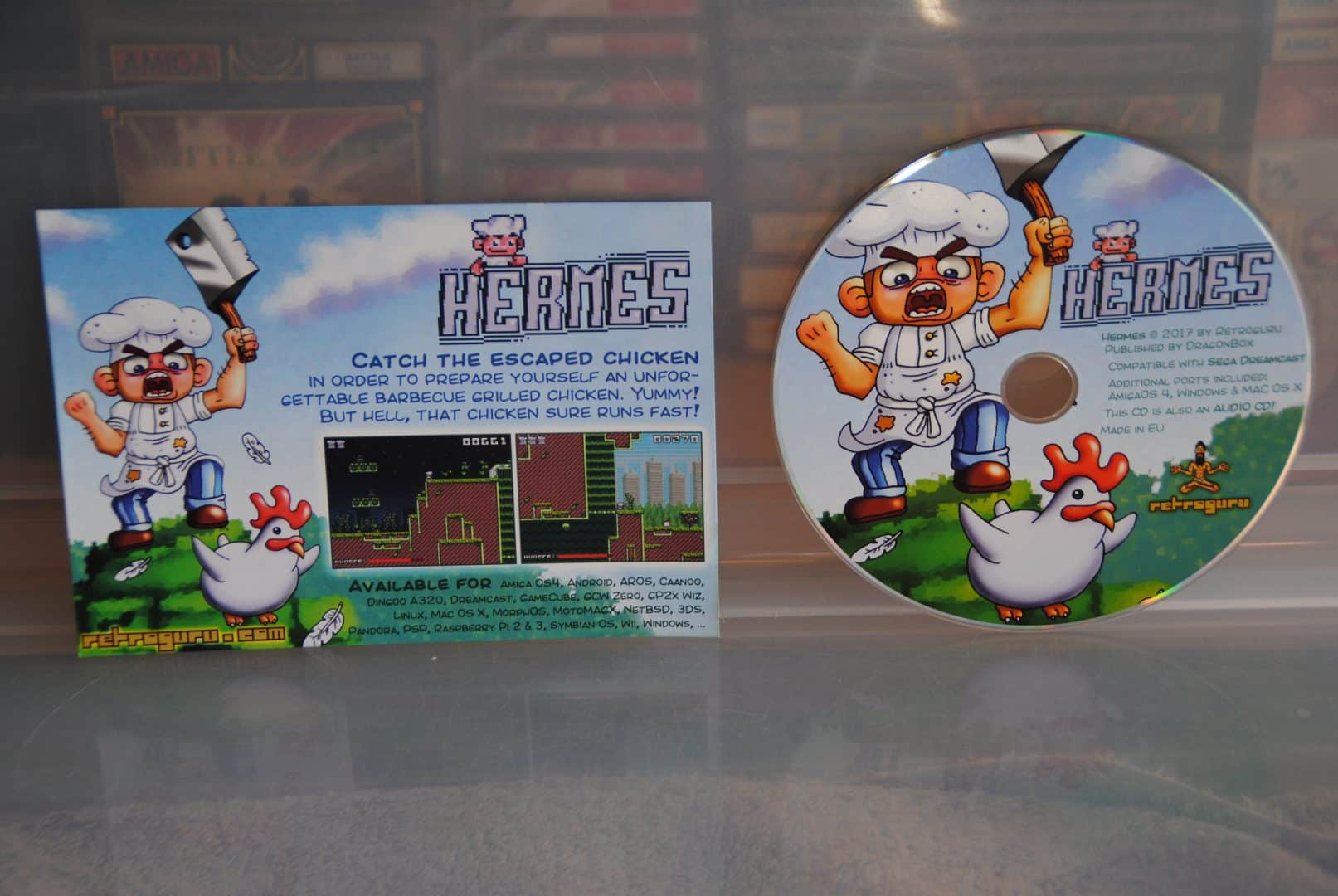 The CD and leaflet are using the same graphics and style and yes it does look gorgeous in my eyes. 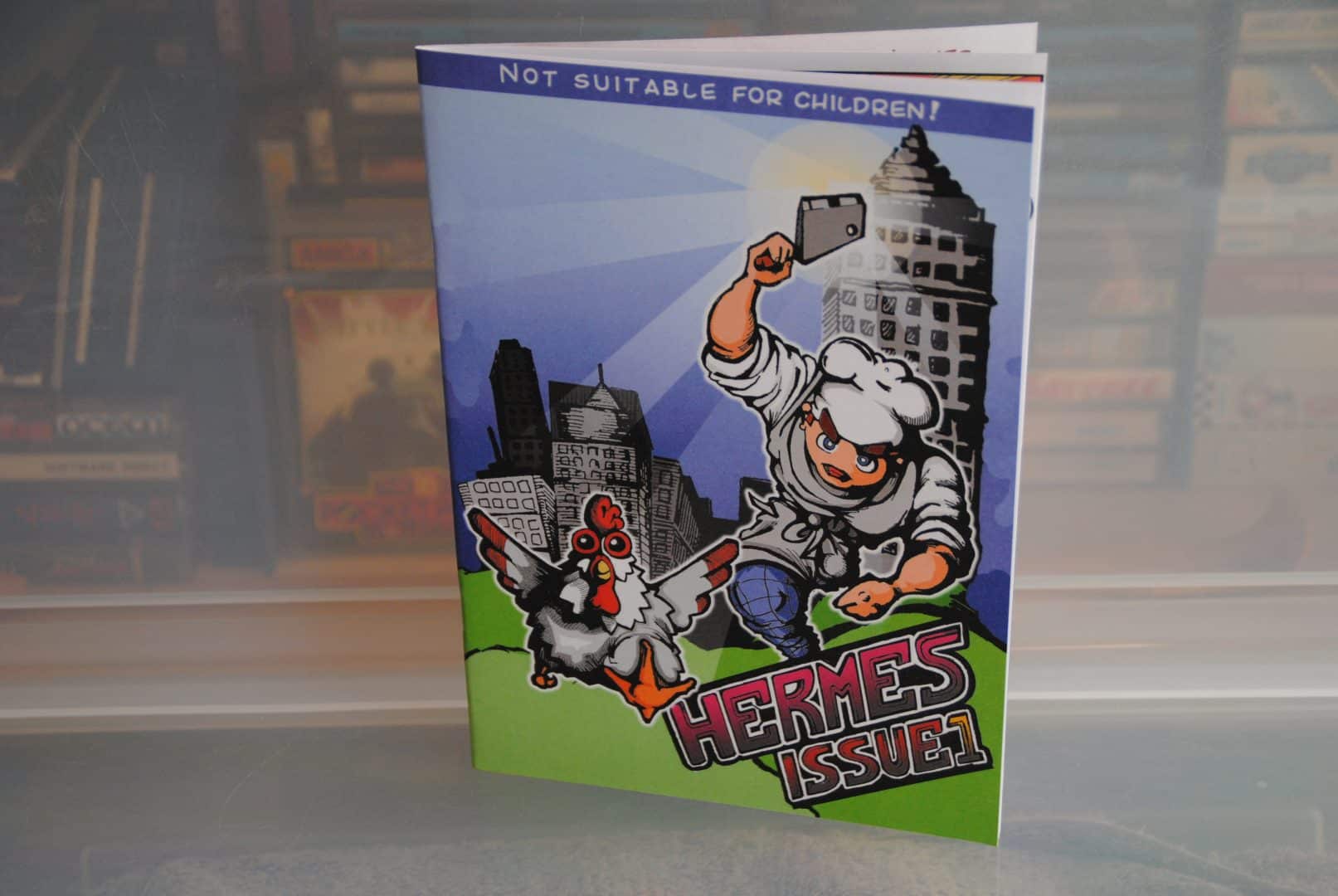 A Comic book is included too, pretty big too.

The graphical style is a bit different from the game and cover but it is still pretty cool looking. 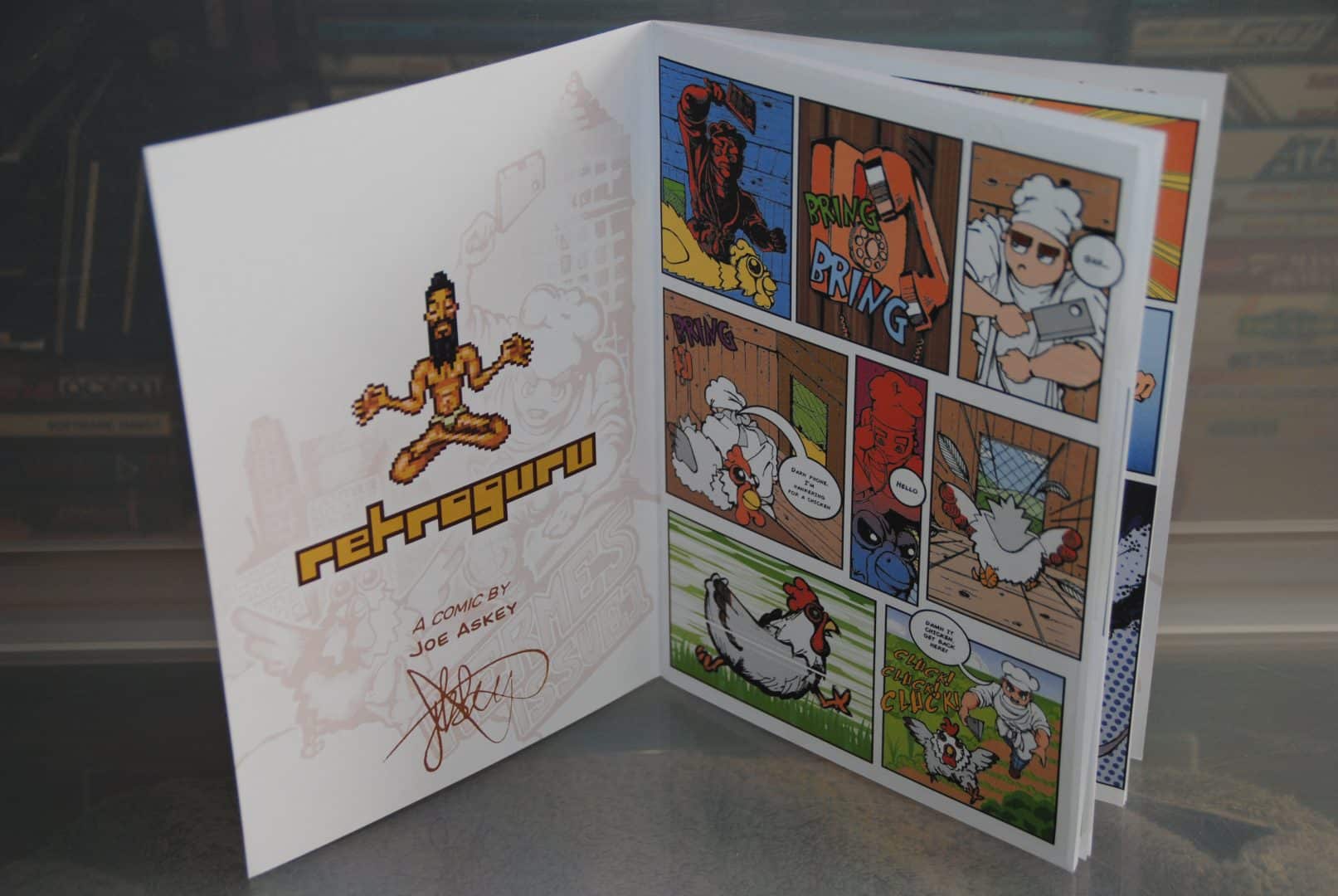 The theme of the comic is the same as in the game, funny, rude and a bit on the edge.

Very good use of colours in the comic but the paper used ain’t the usual type found in mass-produced comics sadly.

The game is actually pretty good too, good game design and a lot of fun are to be had in it, a lot of crude humour and bad jokes but i am pretty sure most Amiga guys (and Dreamcast) can handle it, if not, your loss.

Silky smooth scrolling, an awesome chip soundtrack (CD version even has proper CDDA tracks to make it even better) and with graphics that screams top quality and quite similar to the “Pierre Le Chef’s Out To Lunch”  style at times.

You can’t go much wrong here if you want a retro platforming game for your Amiga One or Dreamcast.

Free Download versions for most formats can be found here on retroguru.

Here’s a video of the game running on AmigaOS4.1 in window mode, decided to use this video instead of others as the quality was pretty good and that it’s actually running on the Amiga and not the Dreamcast or whatever version.  – Subscribing to George’s Youtube channel is also recommended if you’re into Amiga stuff. 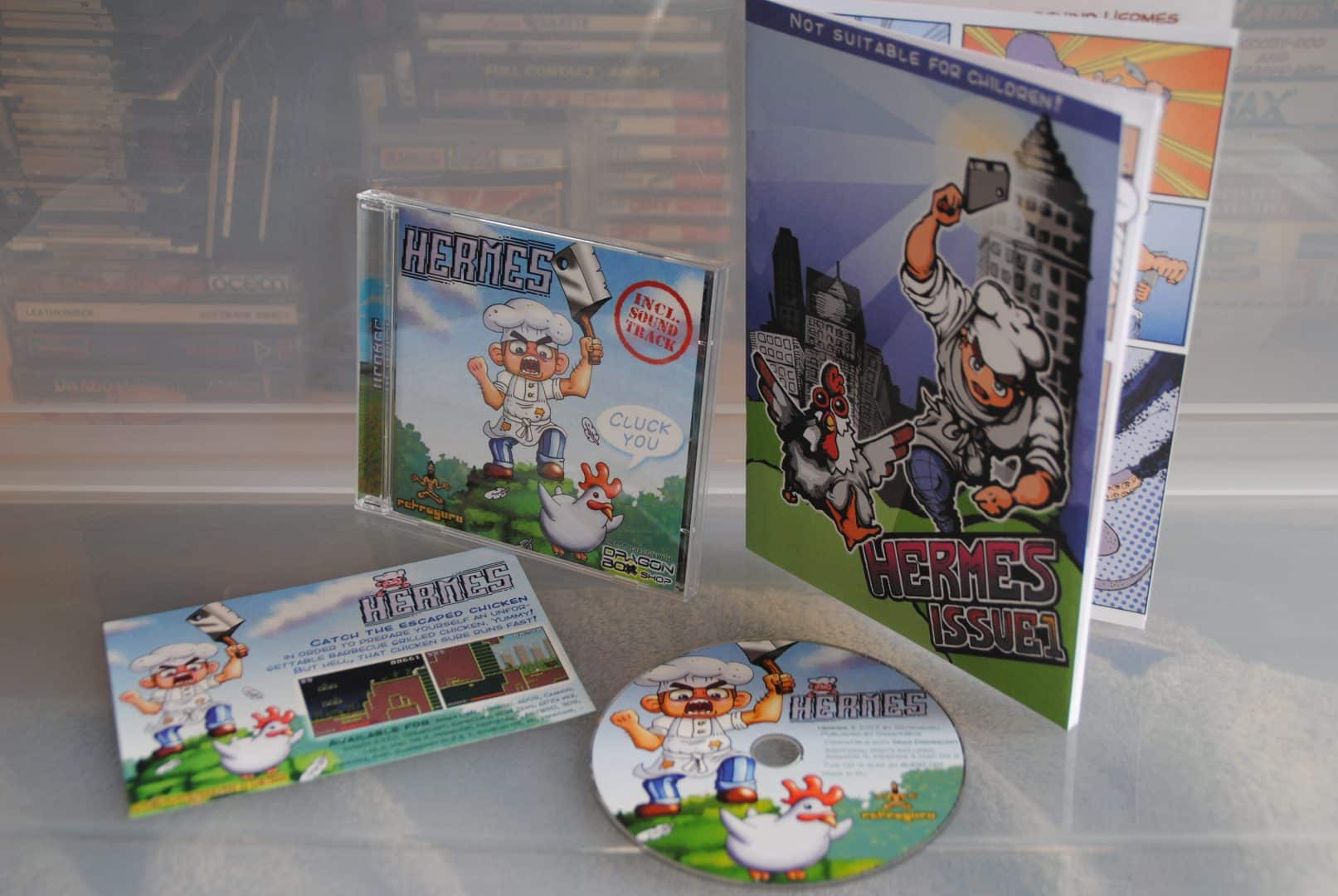 So, is Hermes worth getting on CD even if you have the free download? , i personally have to say yes as it’s cheap and the money goes to the developers who decided to support the Amiga too, that said, i am not too sure if this will ever be a collectable in the sense of it being an Amiga game due to it being a Dreamcast title, that said – anything Dreamcast is collectable too so…

The CD version can be bought from Dragonbox for 15 Euros.

Support retroguru now and get the game!.