Just Cause 3 CE is probably my last article about boxed CE/LE/SE stuff for a while. I have spent too many articles and time on reviewing everything in a box from crap to pure gold this year. 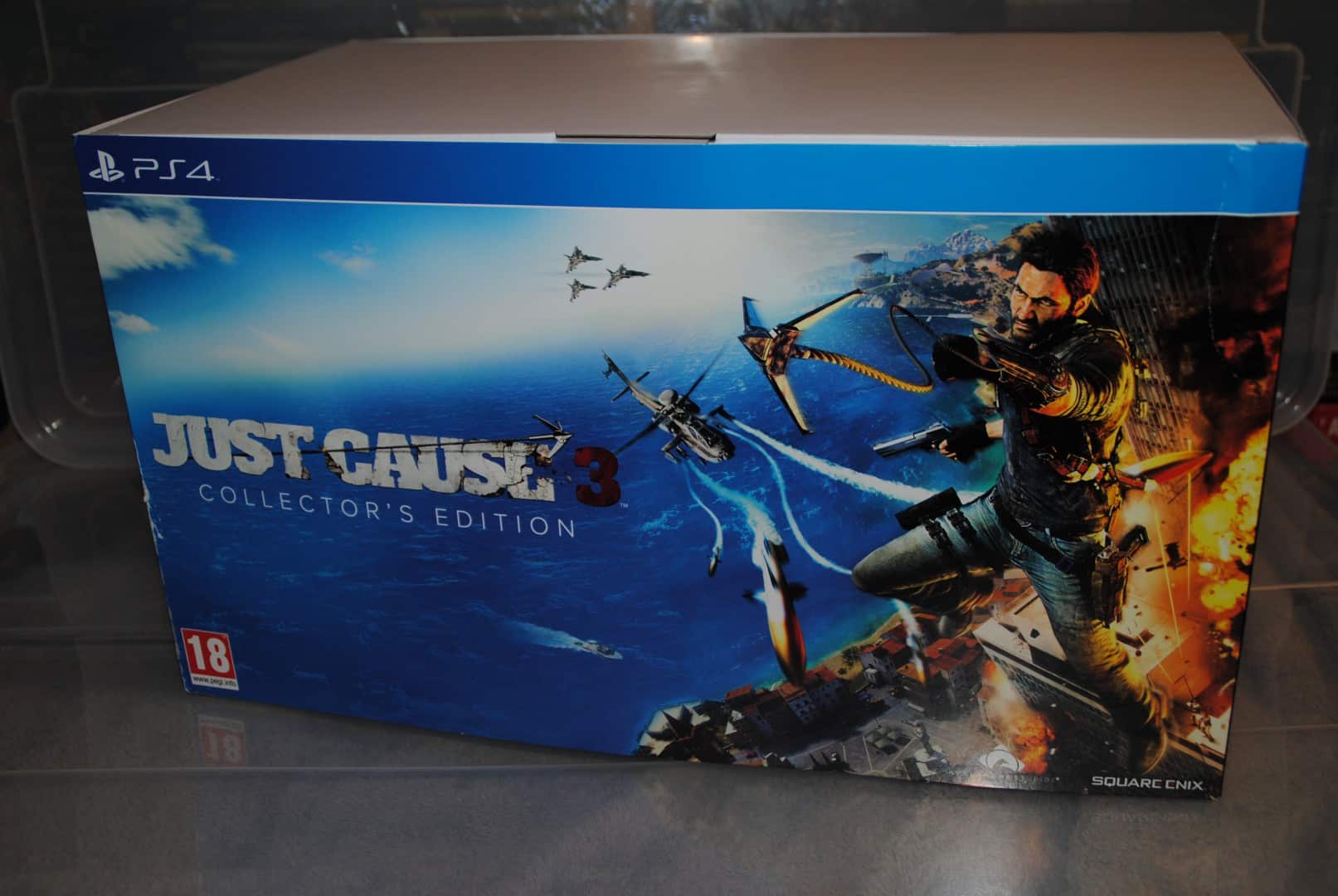 The box is huge presented very good, awesome art design and it is a perfect match of colours and the flashy look. It screams buy me, i am awesome etc. 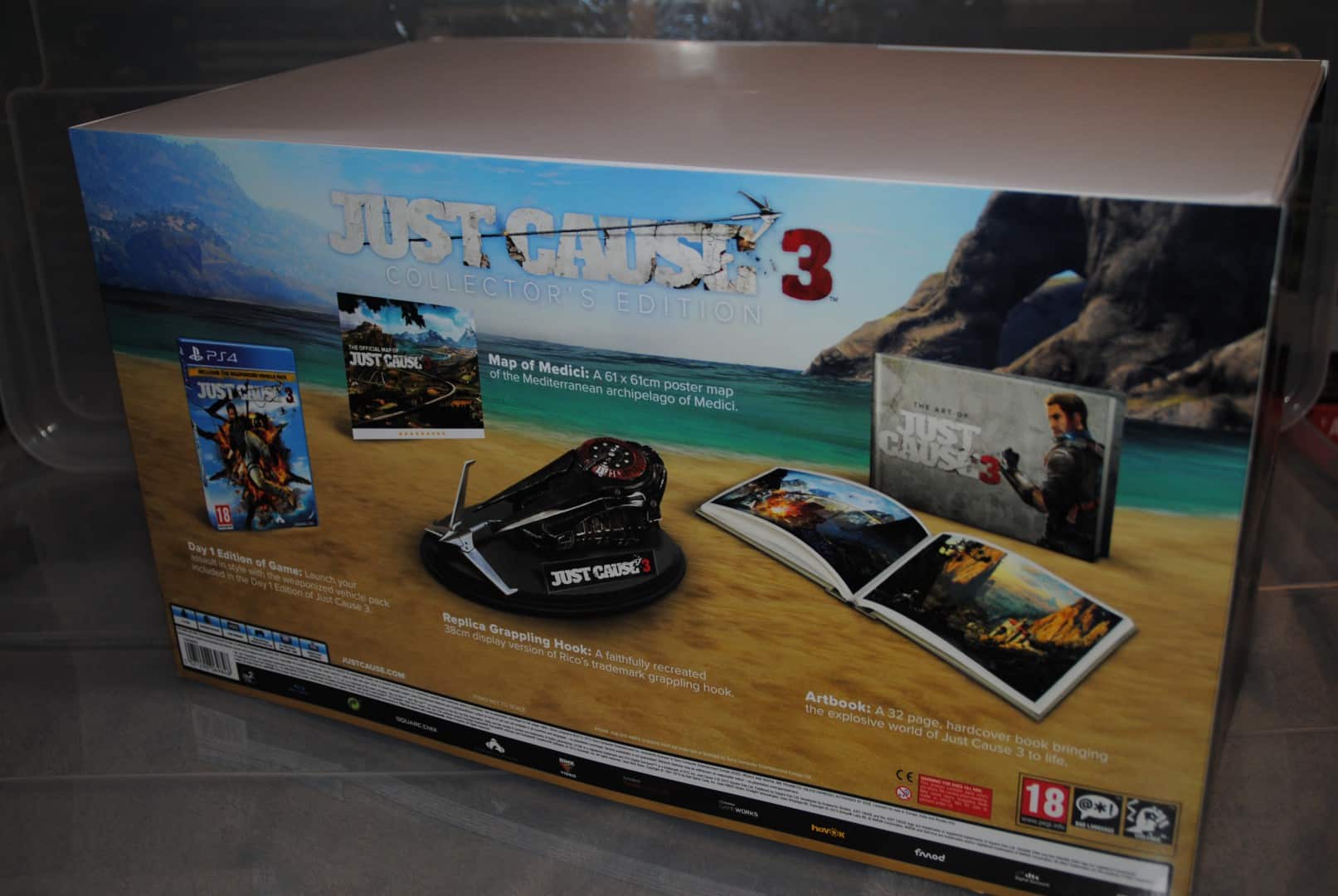 I must admit that i took a peek inside the box before writing this article, yes i know, shame on me.

The back of the box shows everything that is inside, a bit sad really as there are no surprises, that said when you look at the picture it shows more than enough to make that premium price worth it. 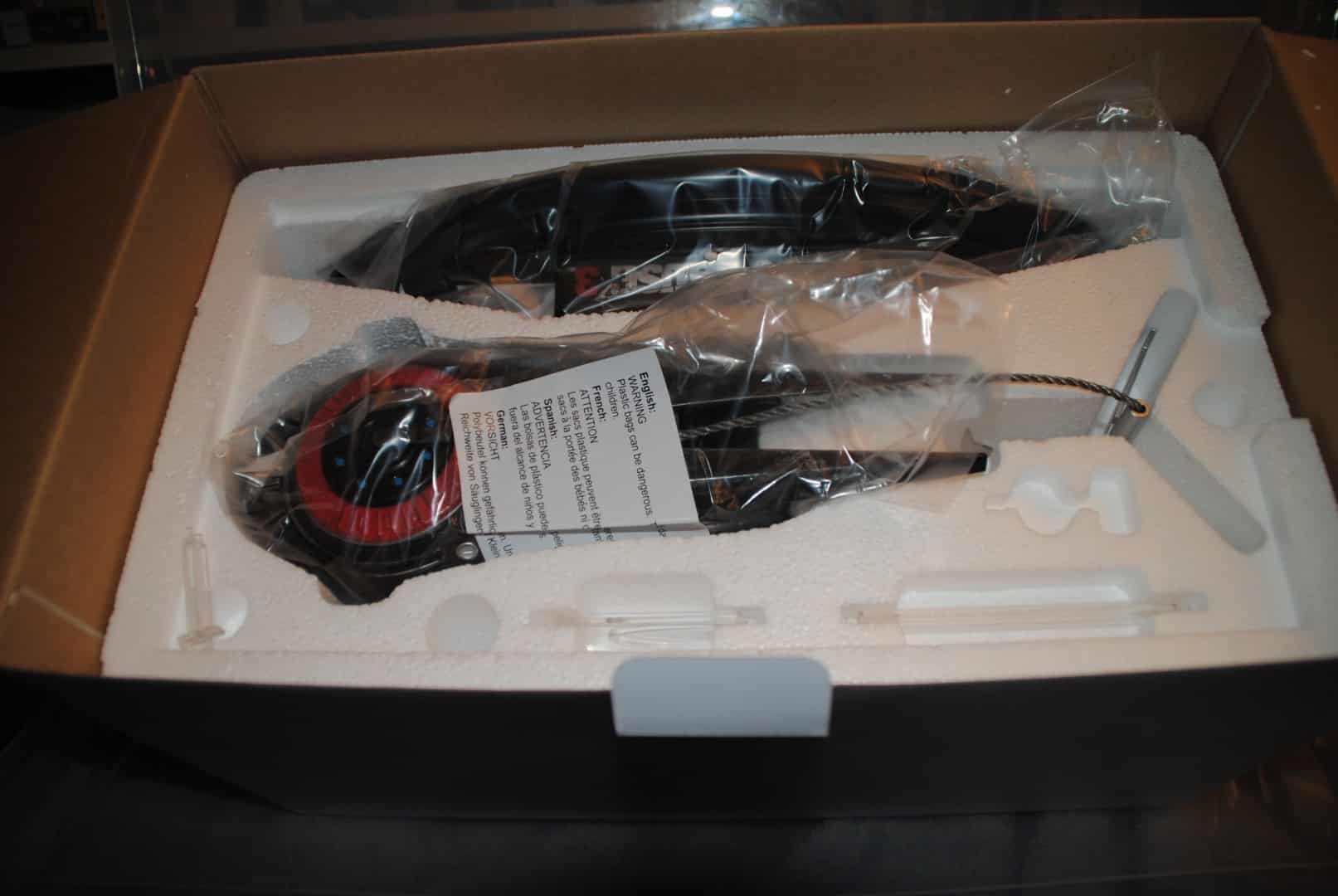 Time to open the box then, at the top of the box lays the grappling hook and at first glance i said to myself, hey this ain’t full sized!. 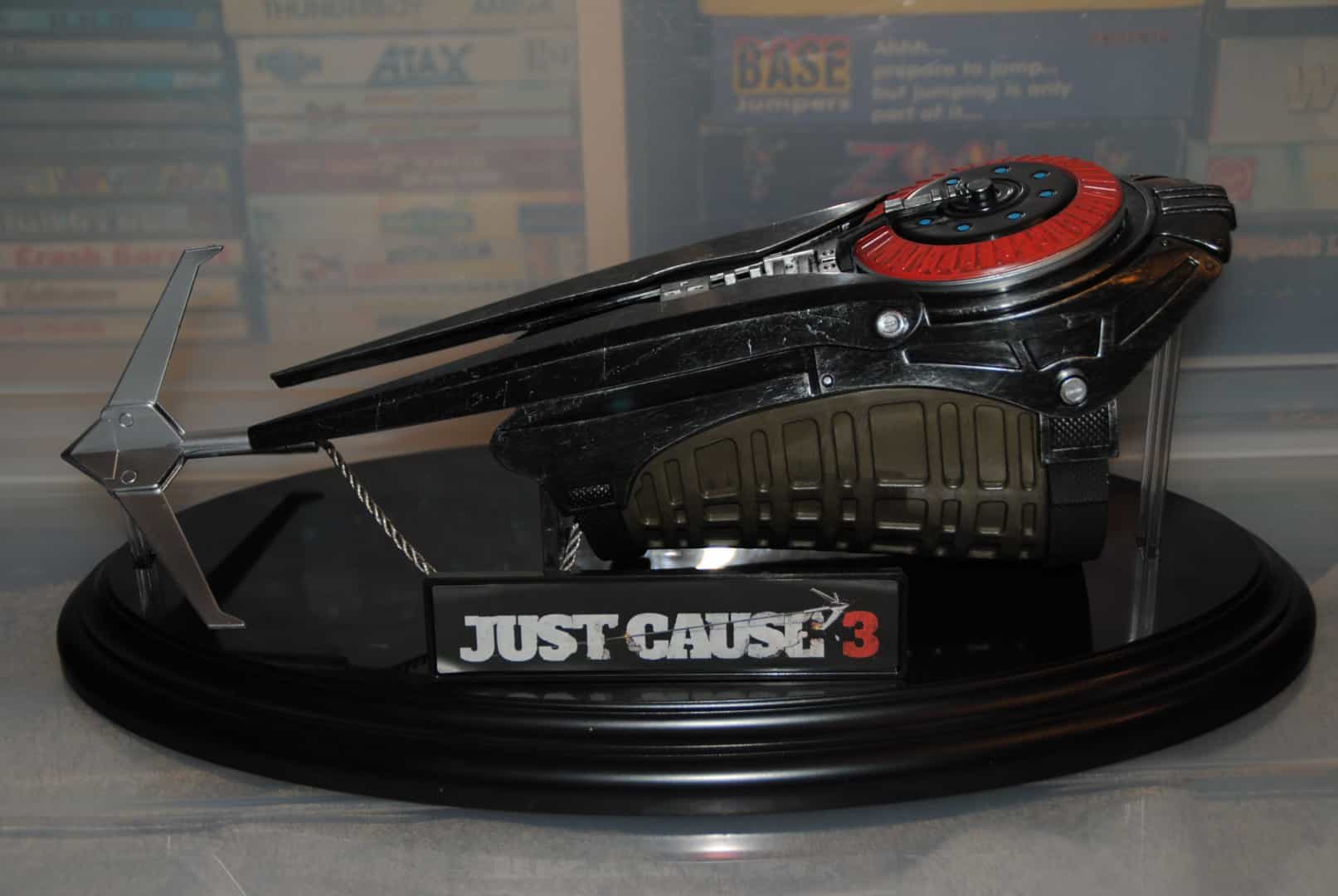 After some fiddling with the steel wire and some pillars things that you aligned the thing with, well the result is in the picture. The gorgeous result looks absolutely brilliant. 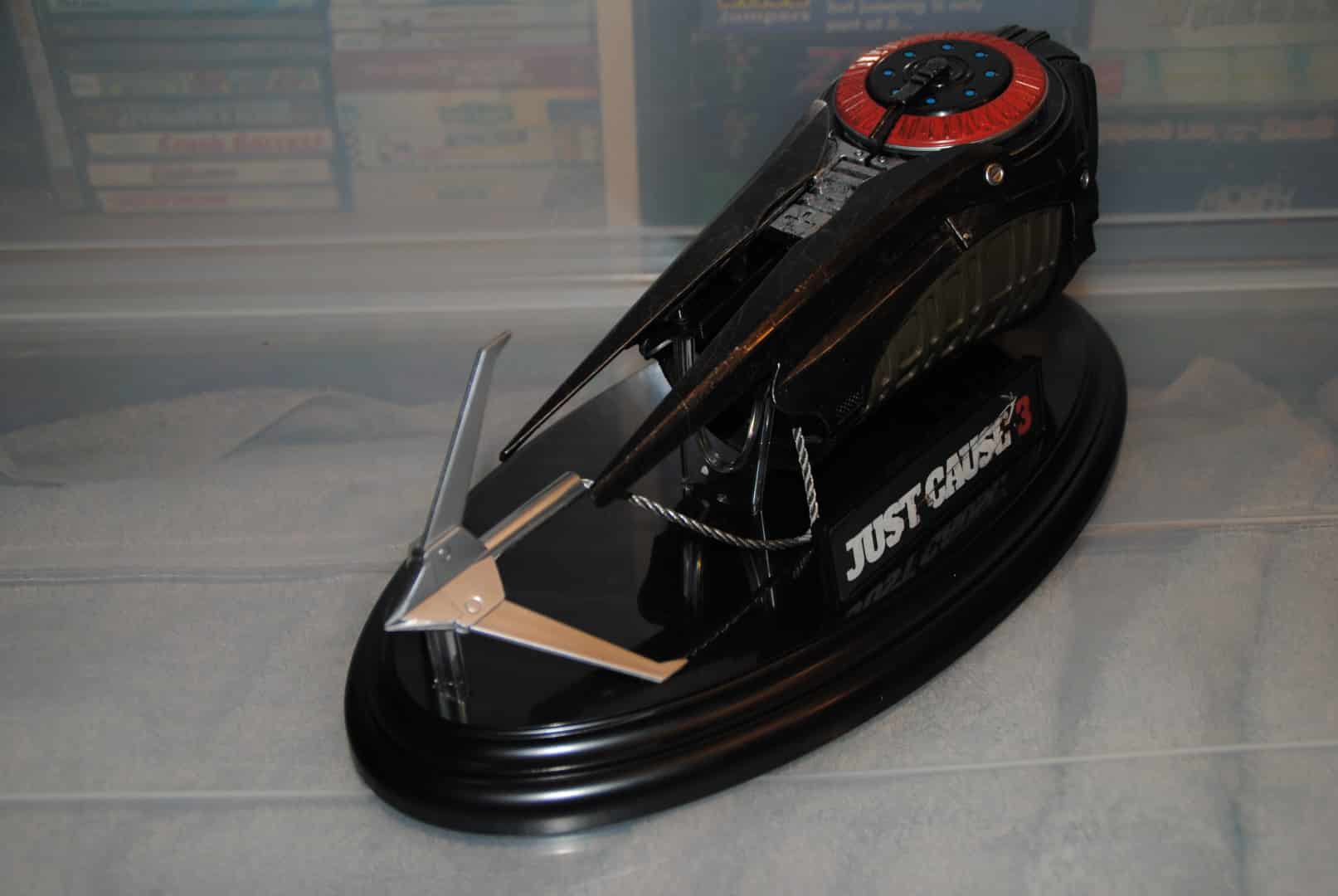 After the picture earlier i decided to move the wire a bit, the result, AAAARGH!. The wire is so stiff and the pillars so loose that i gave up eventually and just put the cable on the outside of it (see picture above). 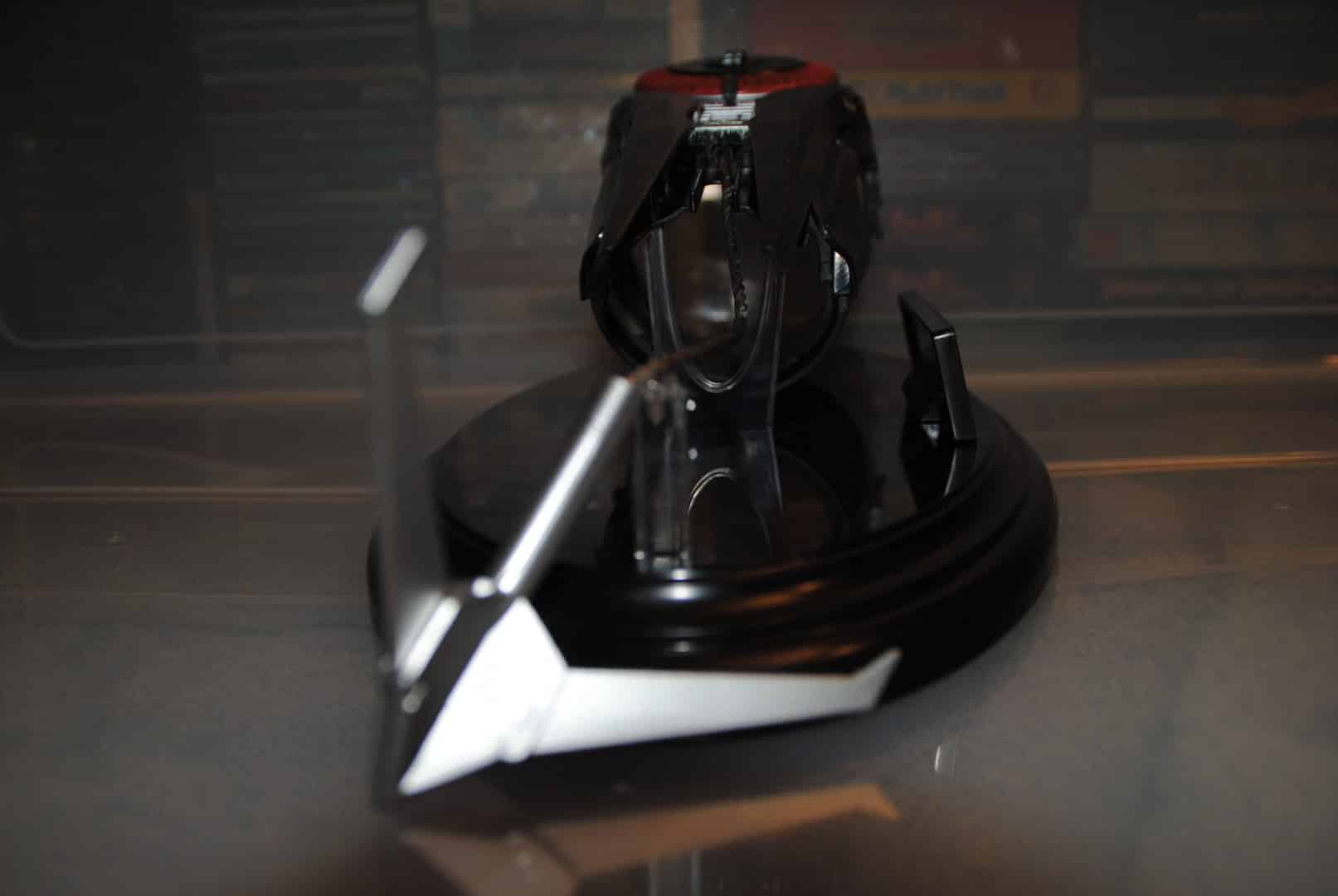 The grappling hook works! it flew up the wall and the “glove” made a really cool electronic sound, but then all of a sudden there was smoke coming out of it and there was a loud alarm too. I tried to remove it but it was impossible, all of a sudden an Indian woman stood next to me and told me to stand still while she fixed the grappling device.

Ok, ok, that was a lie and in fact, it is a scene from the game.  The grappling hook does only work in the game sadly.

Some more pictures of the unit above look amazing if you ask me. Would look great on my figurine and collectables shelf for sure.

I tried to see how it worked when i hooked it up so it would hang after the cable. Looks nice but my hand ain’t in there, i have no idea how it would look with someone’s hand in it really, more about that next. 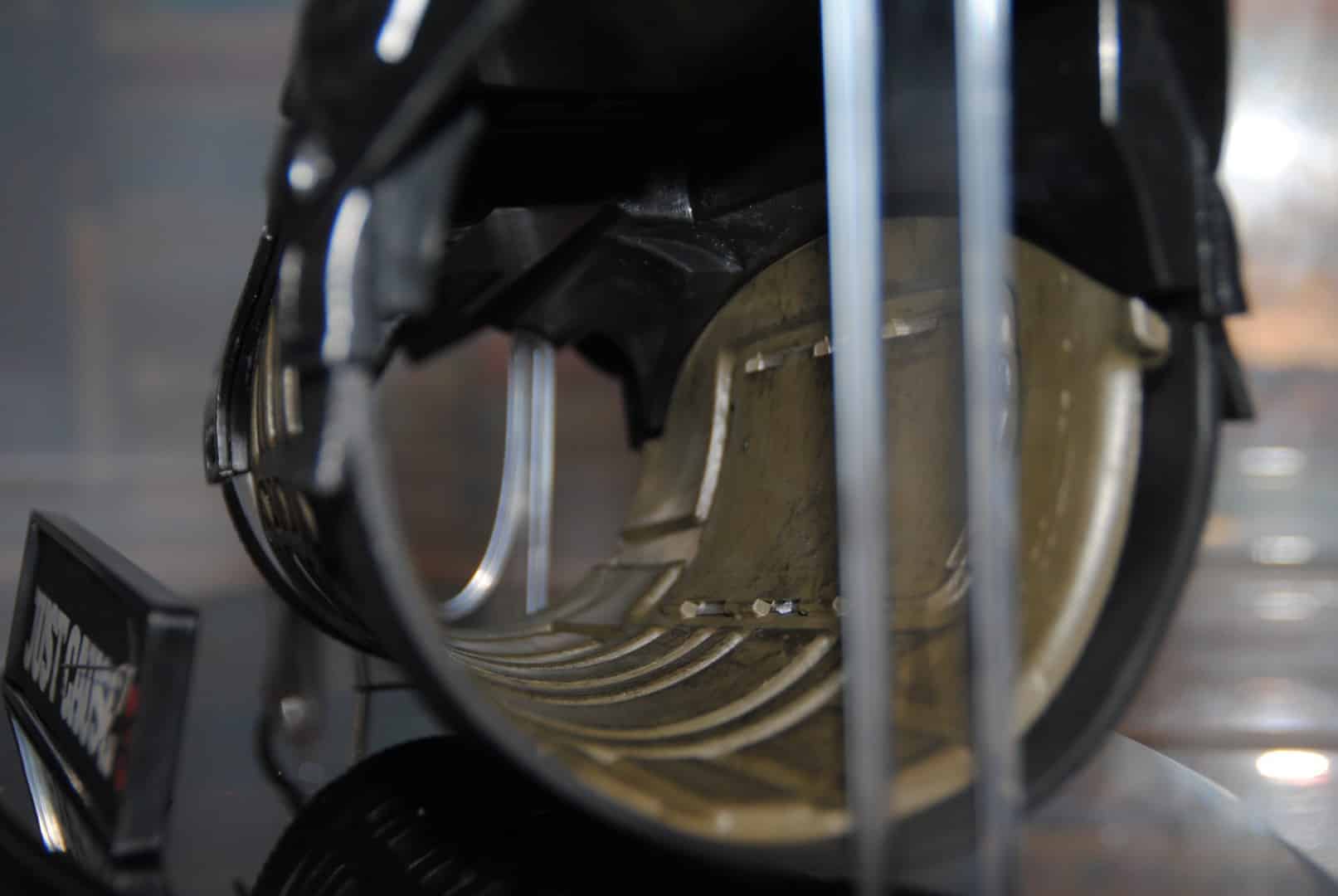 The details on this thing are impeccable, looks bloody brilliant, but there is one catch and that is that my hand will never fit inside it, i have a plan to attach it on my son’s arm and see if i can do a picture of it. 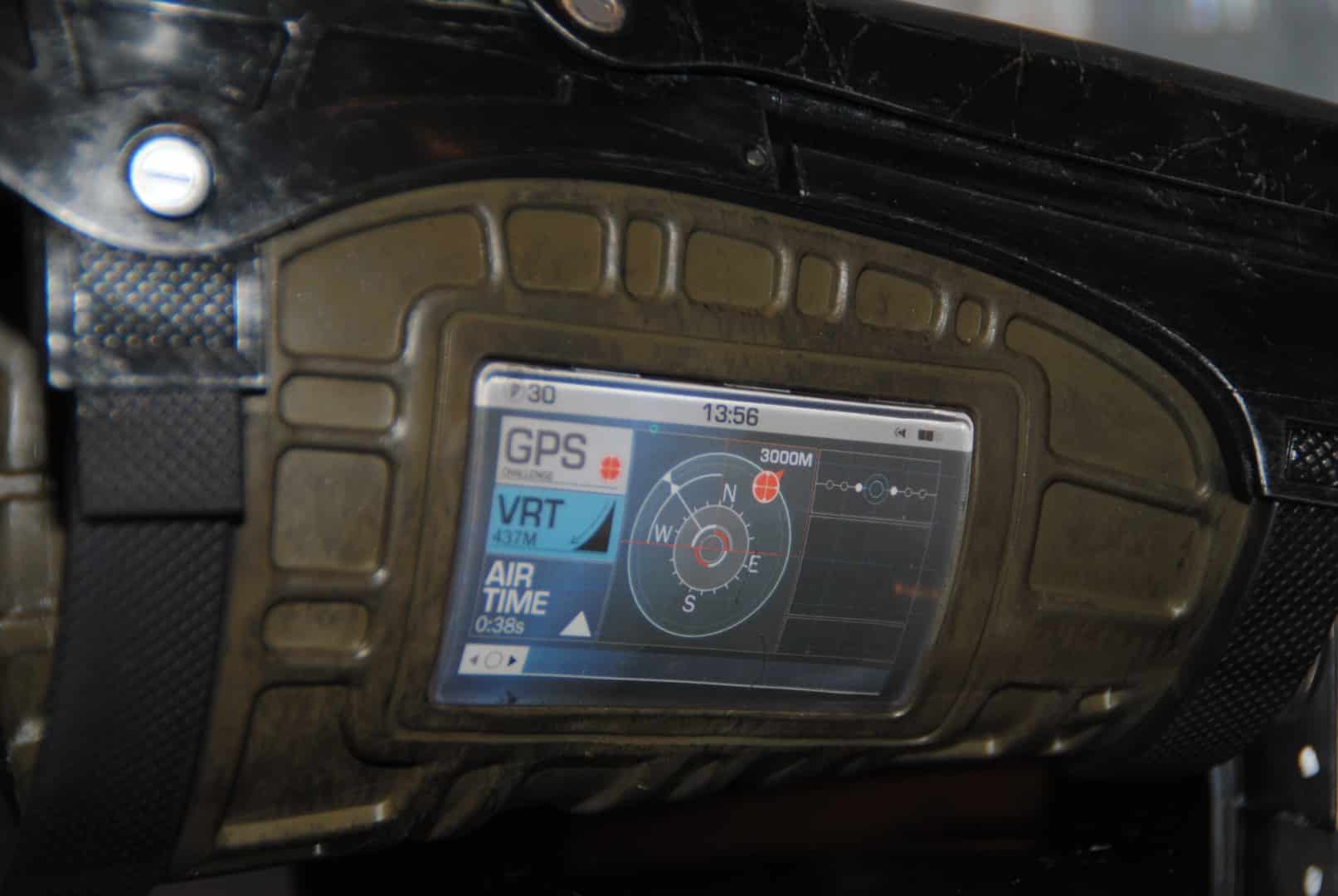 A close up of the display, sadly it is just a sticker. Looks great though, like from a toy in the mid-90s. 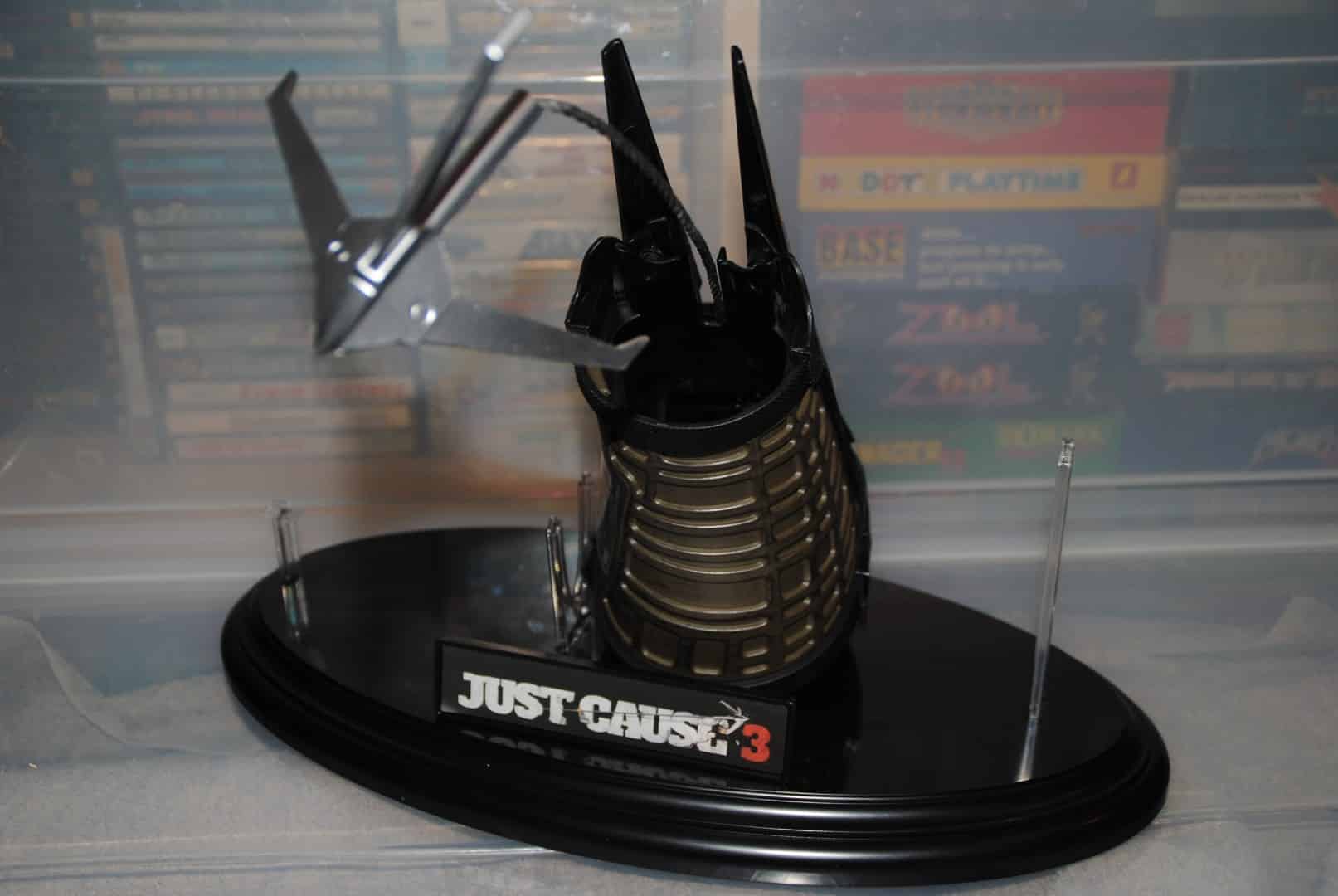 Worm alert!, we need to call Muad’Dib. In this picture it looks like the hook is flying out of the unit, sadly this is just a camera trick.  It is time to move on, next item is.

A map!, huge map with a poster on the back of it, the poster is the actual CE box design, not a bad move.

The map is detailed enough for most, i have yet to play the game for more than an hour and have no idea how accurate the map is and if one could use this one as an advantage over the in-game map. 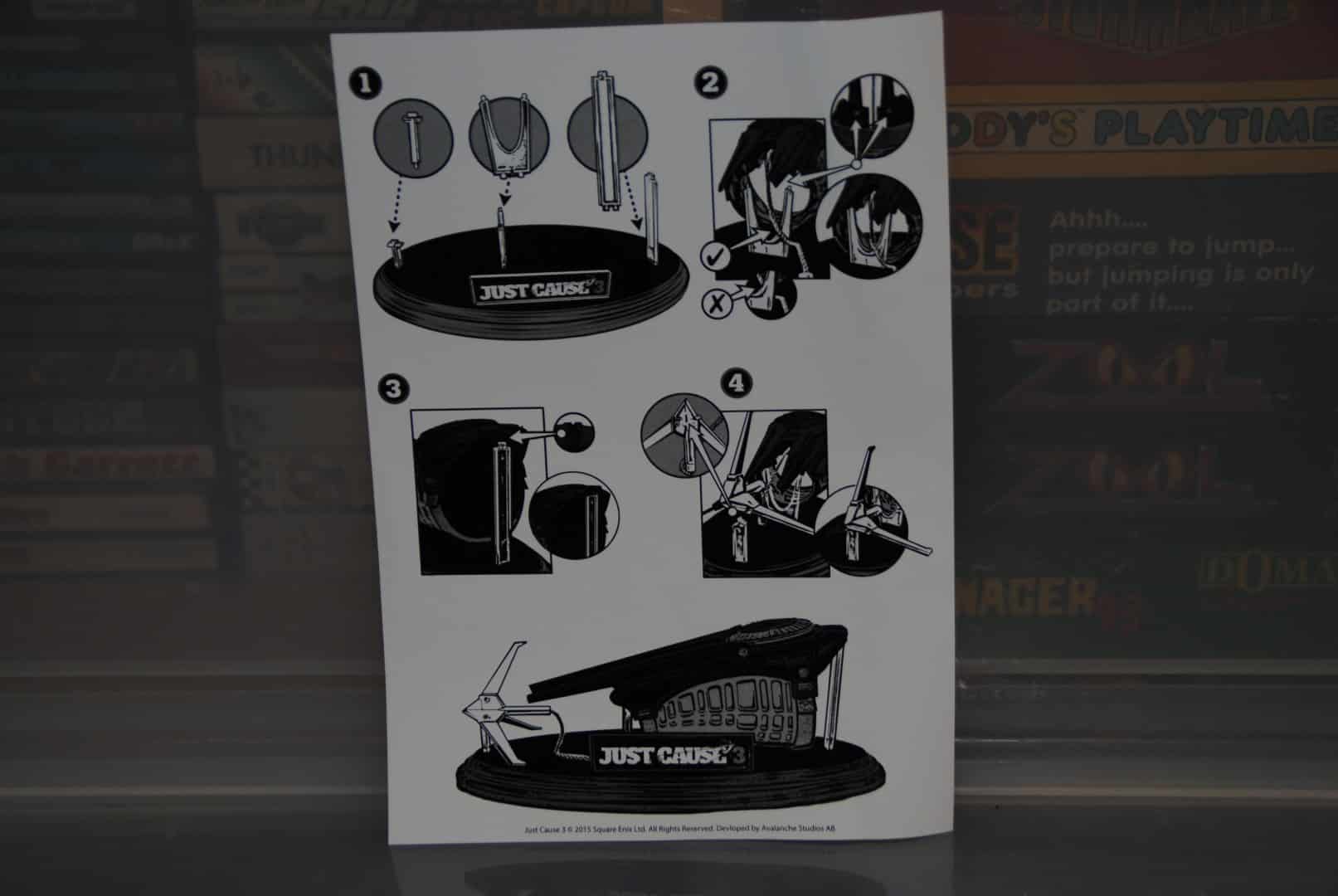 Oh, this is the instruction manual for the grappling hook, oops, oh well seems i did everything correctly anyways. 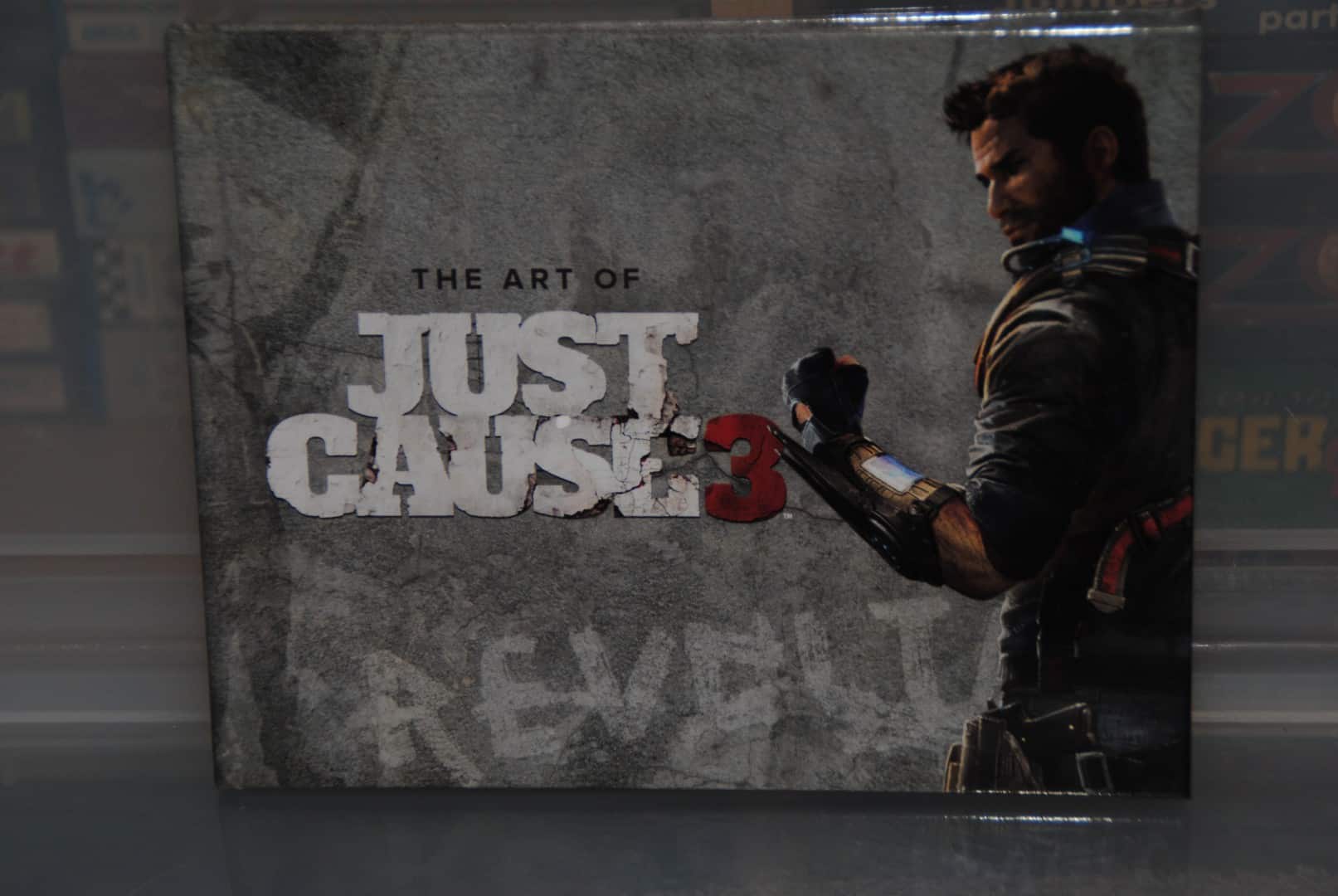 Yahoo, artbook time!. a nice A5 sized book with some 30+ pages in it. I love these things and luckily this is one ain’t shit like the Rainbow 6 book.

Pictured above is just a few random pictures i took, the binding is quite good and that also goes for the material used.

This the box, awesome art again and it is cool how they went and did a different one for the CE box and the actual Blu-Ray cover. The CD label makes me think of a certain guy in South America, great stuff.

The season pass is not included in the bundle, there are some codes though but only for vehicles.

No steelbook inside this package sadly, but for once in a long time, i really don’t care all that much due to the rest of the stuff in the box.

The game itself has not been tried all that much, but that opening song ( Prodigy Firestarter revamp by Torre Florin( slow version)) made me go totally ape, this game looks like it is made for me.