What do you get if you mix a Blizzard title with a collectors edition?

Well, i guess you will have to keep reading to find out. 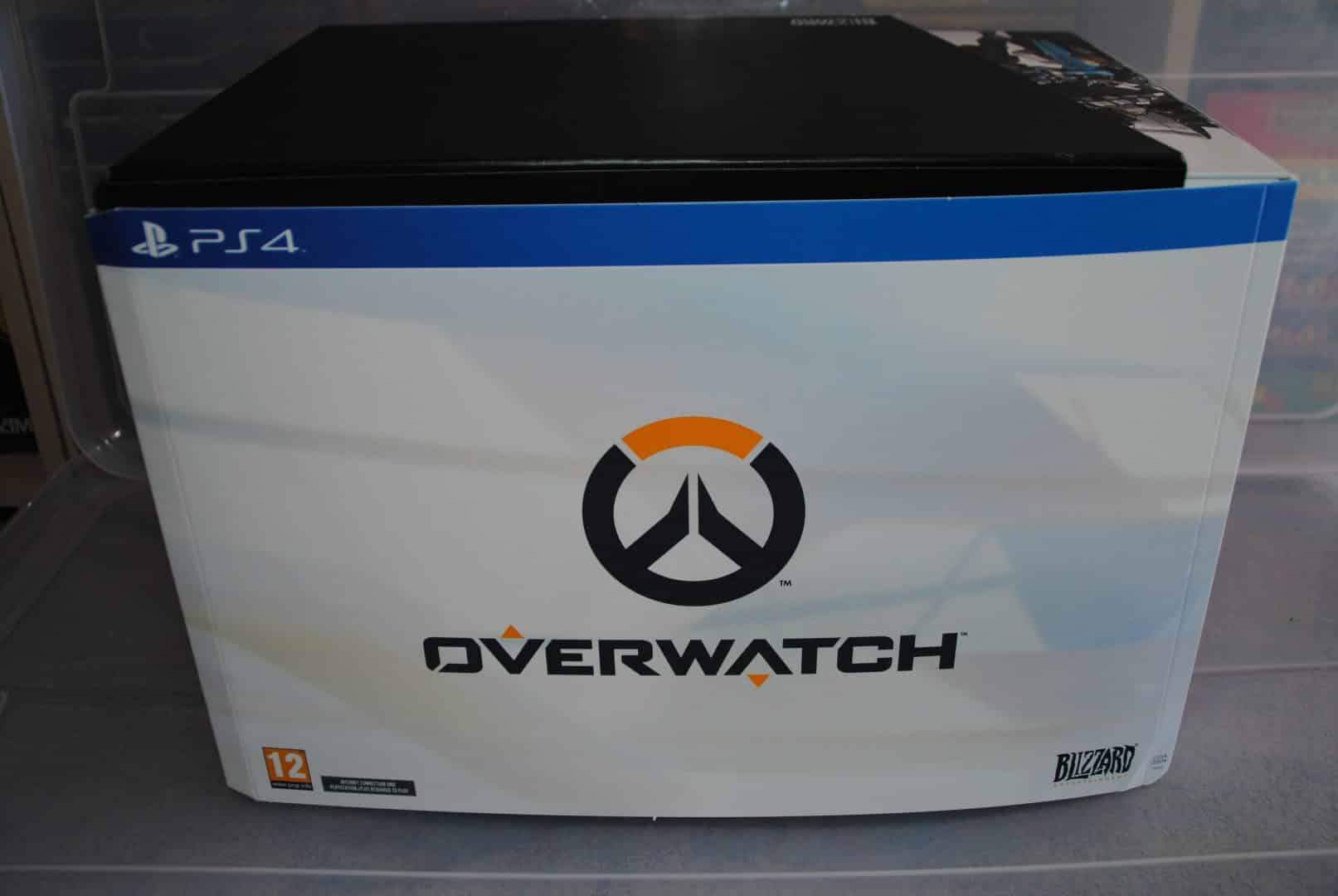 This huge box popped up in my mailbox yesterday, to boast a bit more there was actually two of them, for free. Running this blog is turning into something very good, but then again i have been running it for over 4 years now. 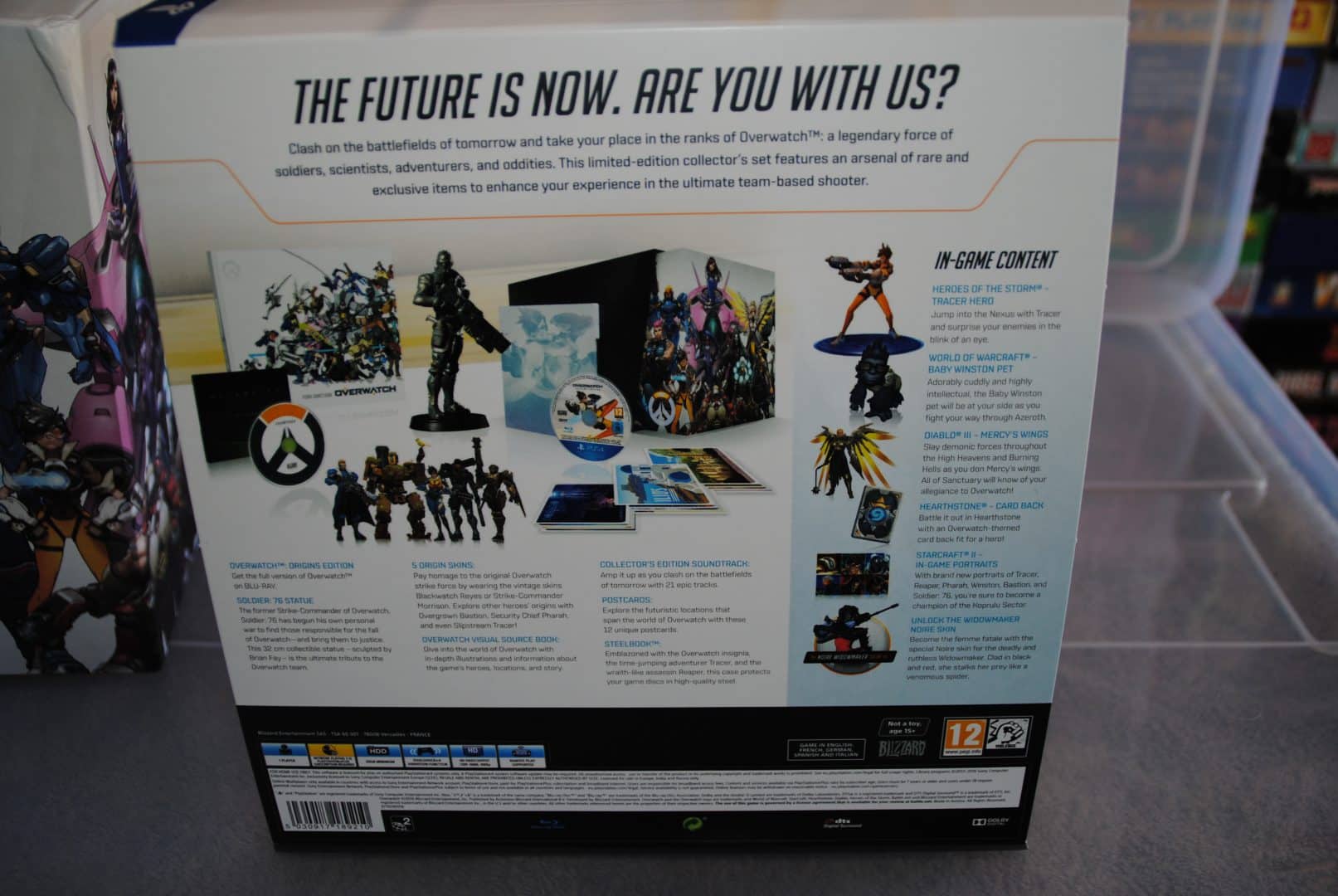 So here i am, two huge collectables and one to go to a friend or a reader, what to do? – I will have to decide later on.

I have been lucky lately, i have got lots of nice stuff from companies all over the place ,and i while i have only written about some of it due to me being quite selective what to write about, and maybe most of all i do not want to turn into a “send me stuff and i will give you a good score” type of site.

Ok, now over to the “review” of this collector edition… 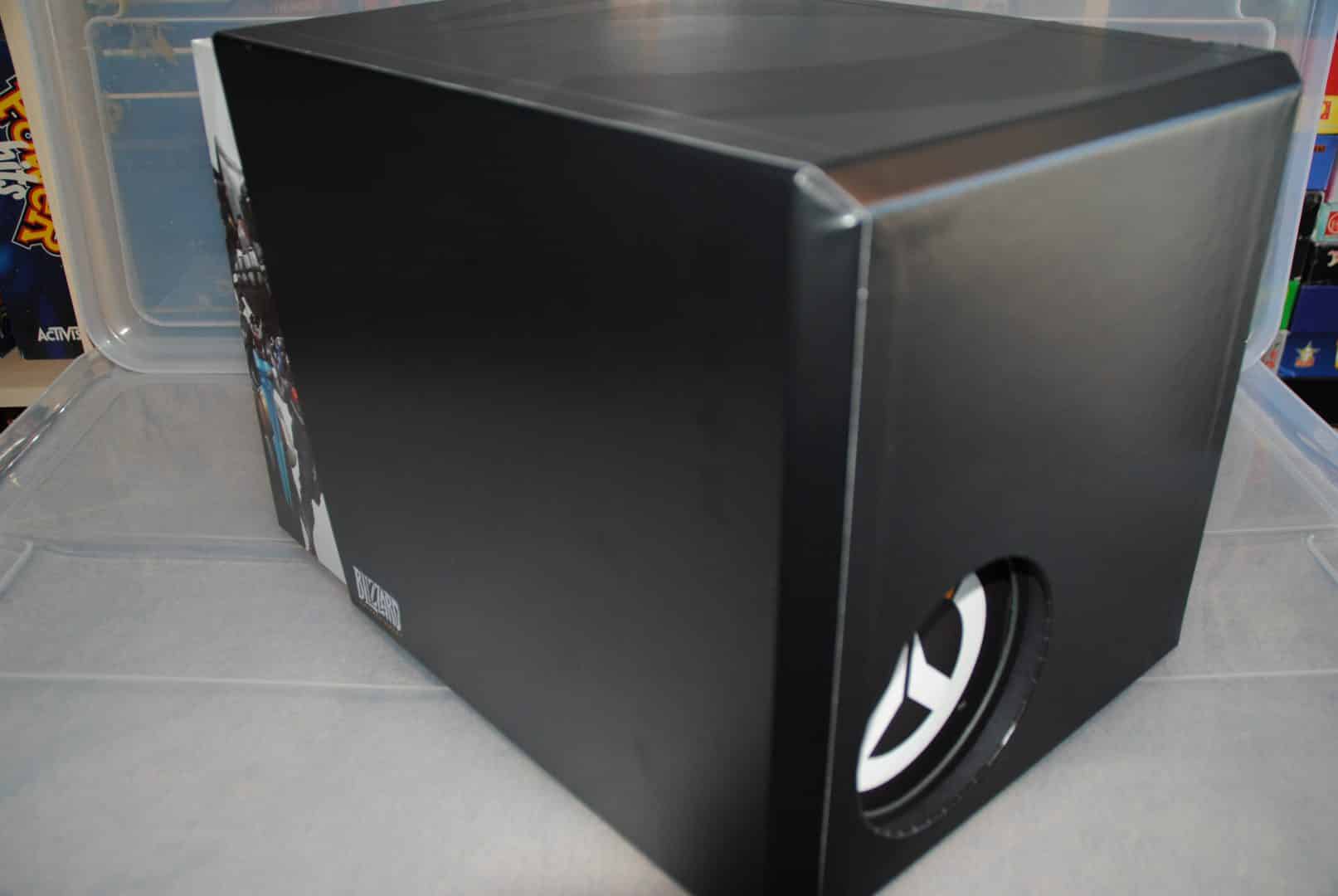 The outside sleeve shown a few pictures up shows a really nice looking box art, i have to wonder why the information is on the side of the box instead of the normal “on the back” way. (yes i know this have been on a few other titles too this year).

The picture above shows the box inside, there’s a peeking hole at one of the sides, the box is made out of really stiff, and strong cardboard, it feels very solid and very heavy.

Inside that box is another box, this time it is not just a black box with a peeking hole.

The art on this box is really good, they have spent time on this one for sure.

This cardboard box is also of great quality, i have never seen this before in a box that has several boxes and all of them of top quality. 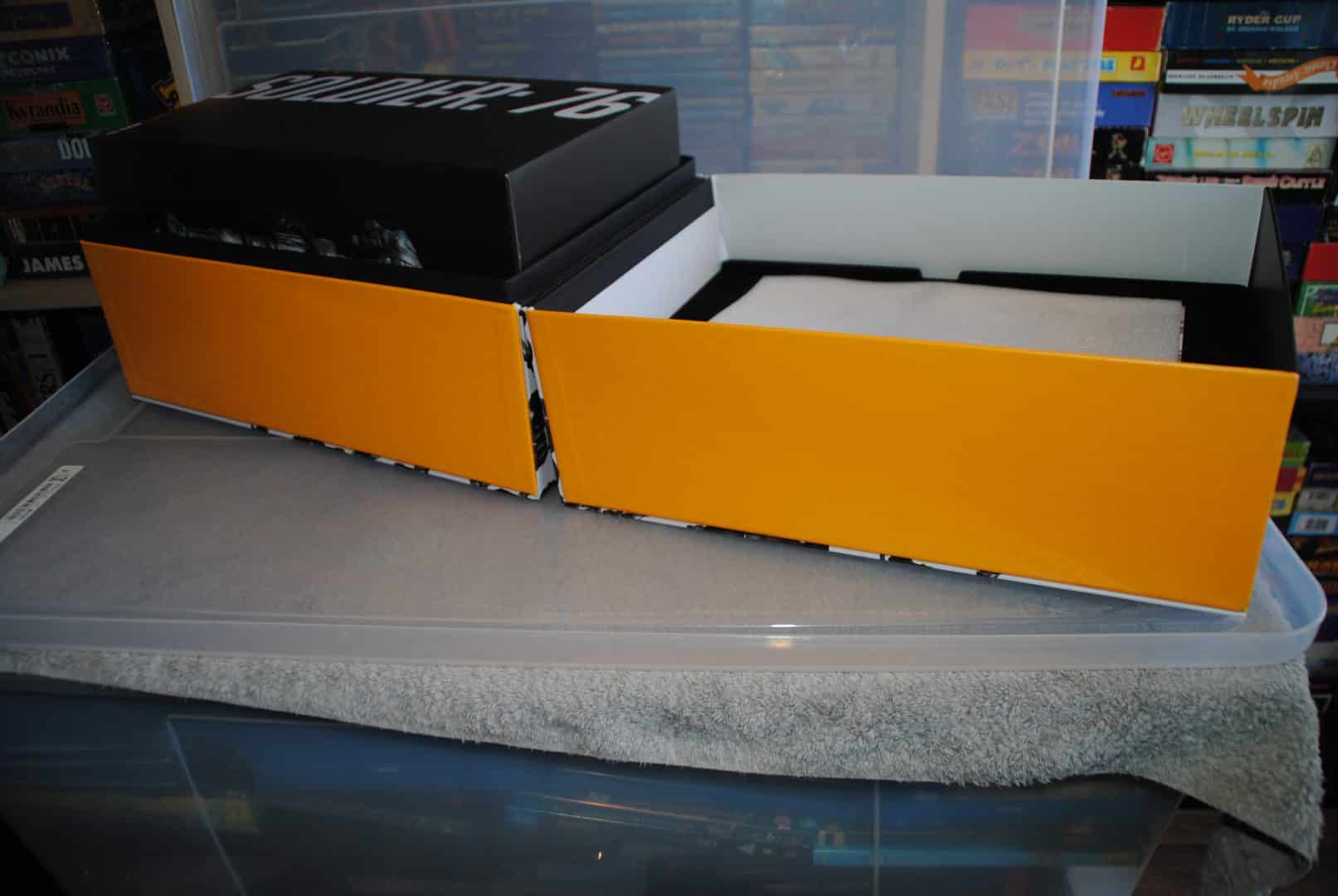 Time to open the box inside the box then, a flip-over box and every millimetre inside is used for something.

The first thing i spotted was that there was yet another box inside here, it says Soldier: 76 on it, i will take a look at that one soon.

So what is next then? , the left-hand side looks like it holds more than just the game, time to take a look then.

Yes!, an artbook, decent sized one too.

The book comes with a transparent sleeve on the outside, it adds the little extra to make it look even better.

Most of my readers know by now that i love artbooks, figurines, and Steelbooks.

So far this box is looking good.

Time to do some photos of the book.

As soon as i opened the book i realized that the binding was a bit iffy, it is not a hardback so it is hard to view without putting a strain on the binding.

It didn’t take long before i heard the glue making sounds, why did they not print the book in a better binding?.

I really want to look in the book, and i will most likely do that a lot over the years, but i fear the glue/binding won’t hold and eventually the book will fall apart.

The next item in the box is an OST (Official Sound Track) CD, most games today comes only with a DLC code for soundtracks, so the inclusion of this CD is a good thing, that is if i like the music of course. 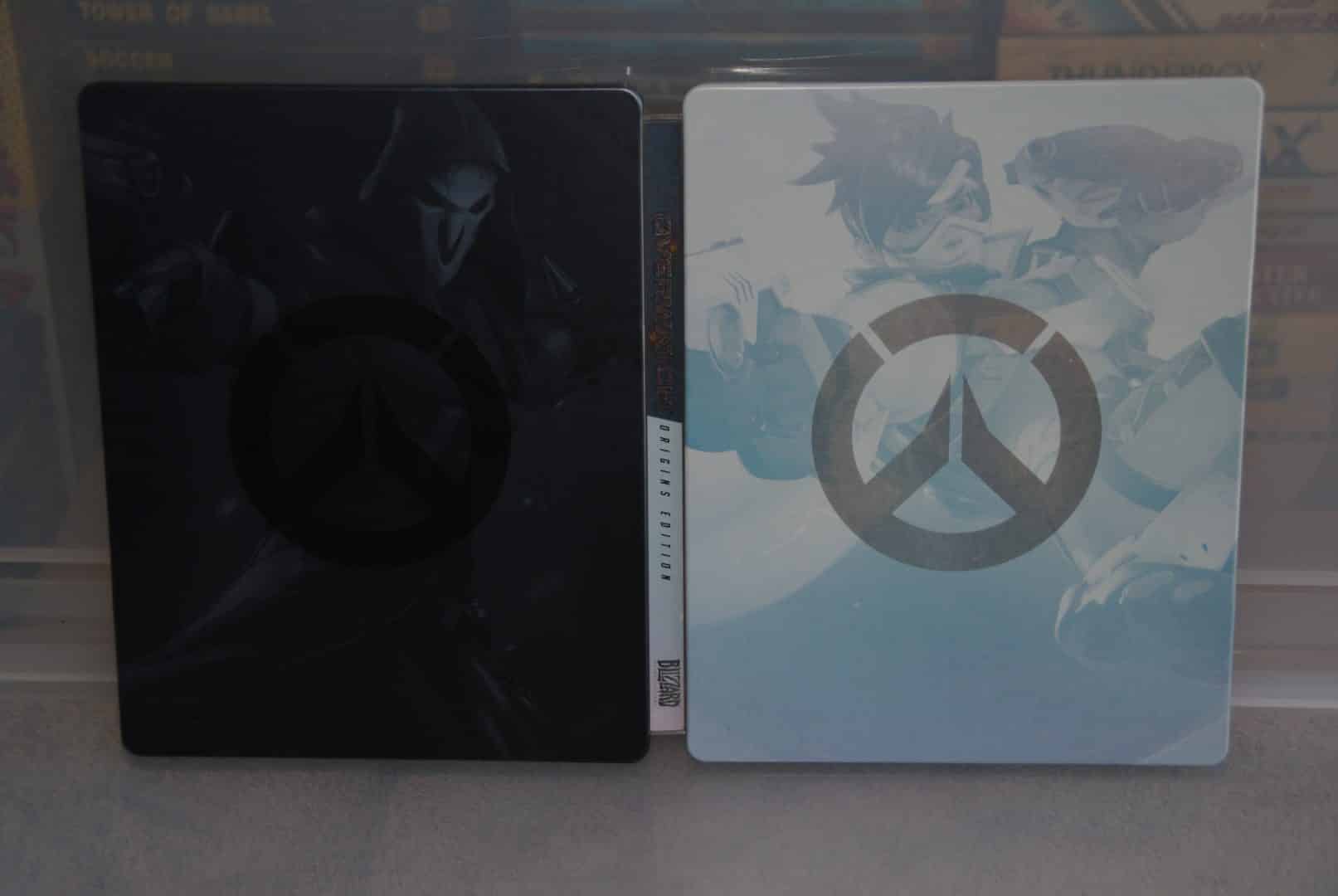 A Steelbook!, i love these things and every game that comes with one get a +1 score from me.

The box comes with an embossed logo/design, clean and cool design and of good quality.

Nothing out of the norm here, some DLC codes, a Blu-Ray etc.

Quite surprised that there ain’t more codes or extras included in terms of DLC. 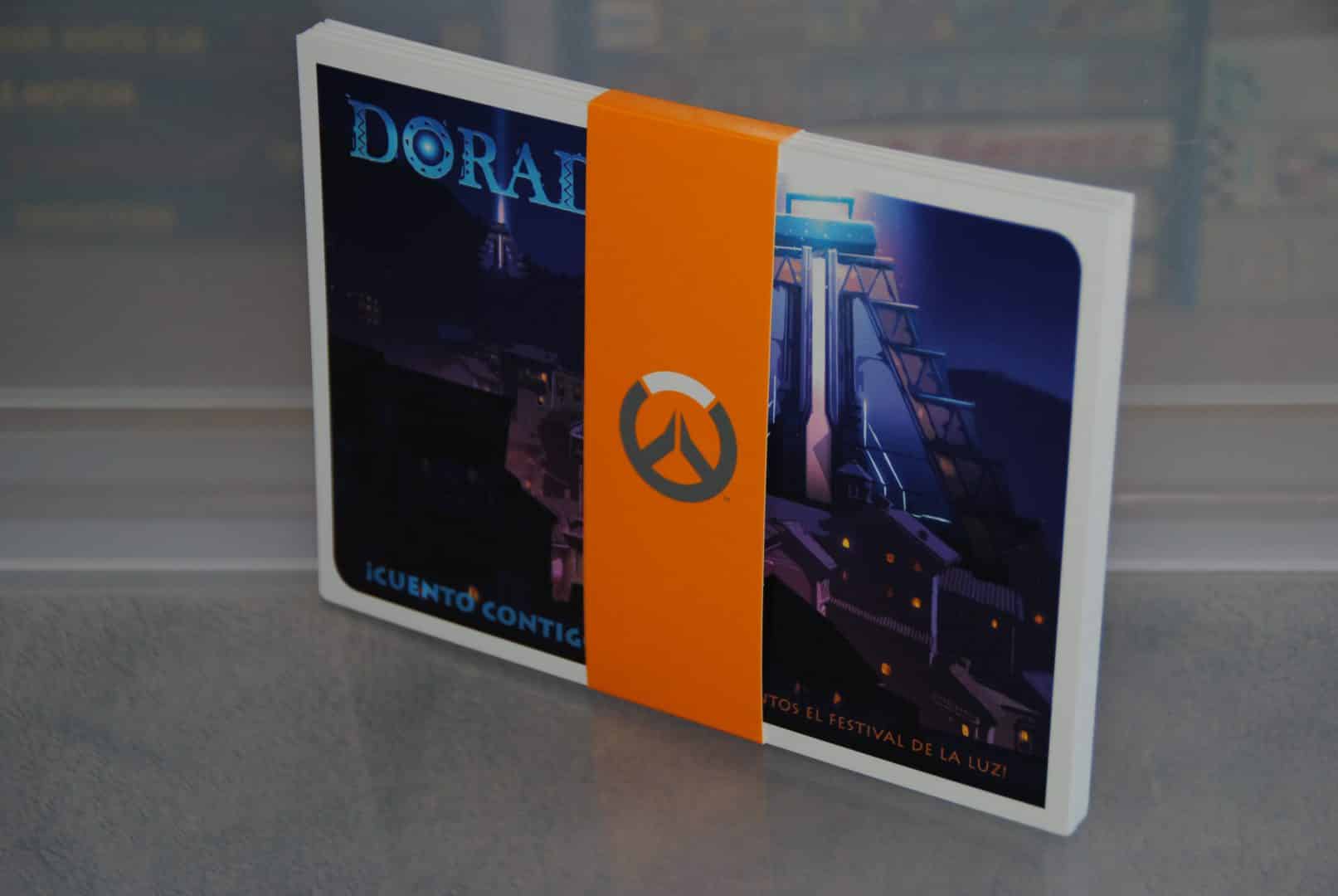 So what’s this then? , a bunch of postcards/art cards!.

My god, this C.E. is turning into a killer collectable, the paper is of good quality (again) and the art on them looks great, more pictures below.

These art-cards looks amazing, it is art i would happily have on the wall in my game room.

The last time i got quality postcards/art-cards of this calibre was with a Loot Crate a few months back, and before that one was Shadow Of The Colossus i believe (yup, ages ago).

The soldier: 76 box is yet again another top notch one, quite funny how they managed to squeeze so many boxes inside a box…

Believe it or not, there’s one more box and this time it is a styrofoam box which has the company logo embossed on it, neat stuff although not all that uncommon lately.

Every time there is a styrofoam box inside a C.E,L.E or S.E, well then there is a figurine inside, right? 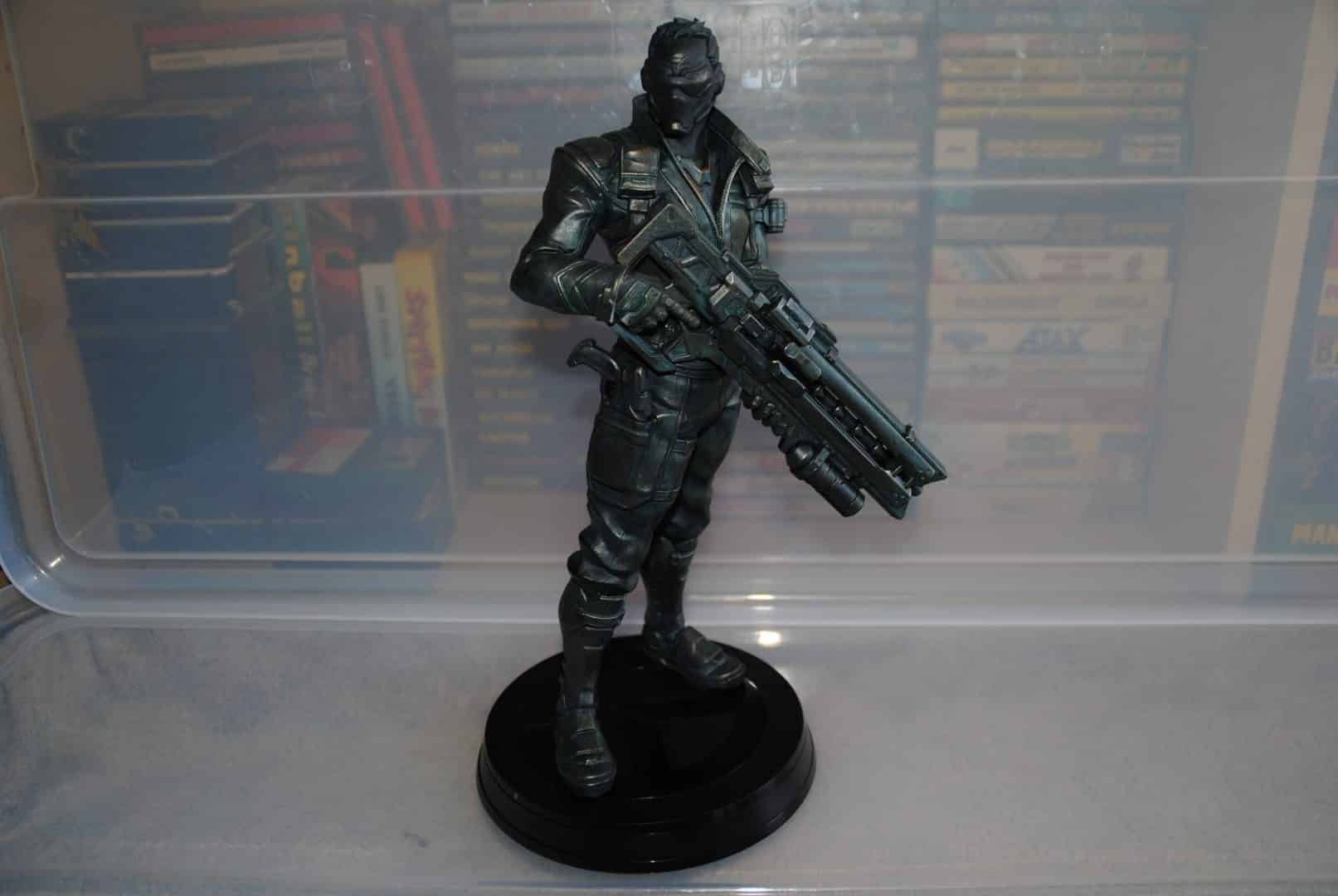 Yup, a figurine it is, a really cool one too.

The figurine shows a “relaxed” Soldier: 76 holding a huge gun.

Why the box has this character i do not know (yet) because the game holds a lot more playable characters from the get-go.

The first thing was that i had to bend the figurines legs to fit the stand.

I hate bending and moving things that could break in a heartbeat, but i found the manual describing how to do it afterwards i had assembled it, heh typical.

The figurine has a lot of details and oddly enough everything is in one colour. Damn, only one colour?. 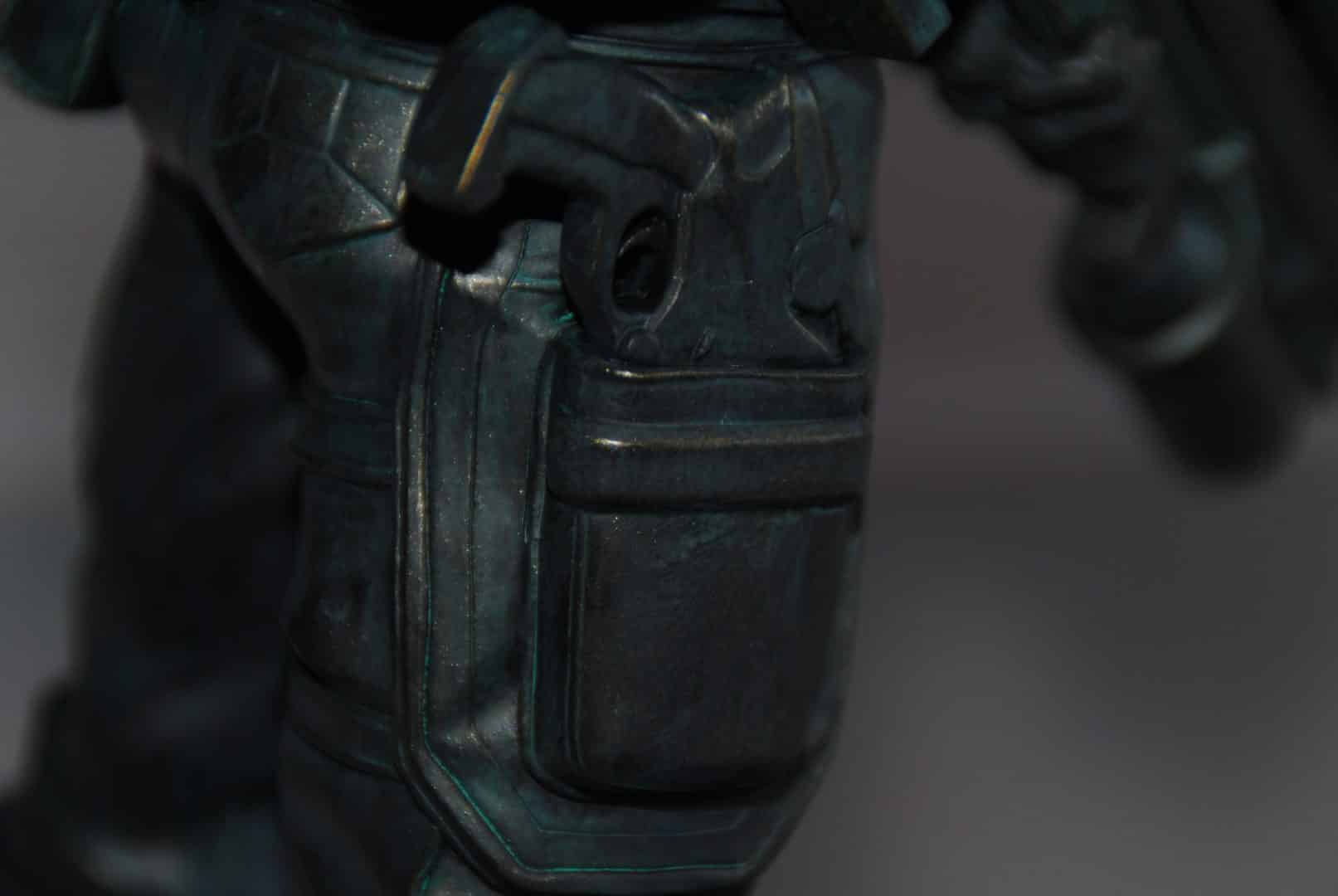 Holstered gun, again the attention to details is impeccable. The guys producing all of these figurines lately certainly knows how to impress me lately. 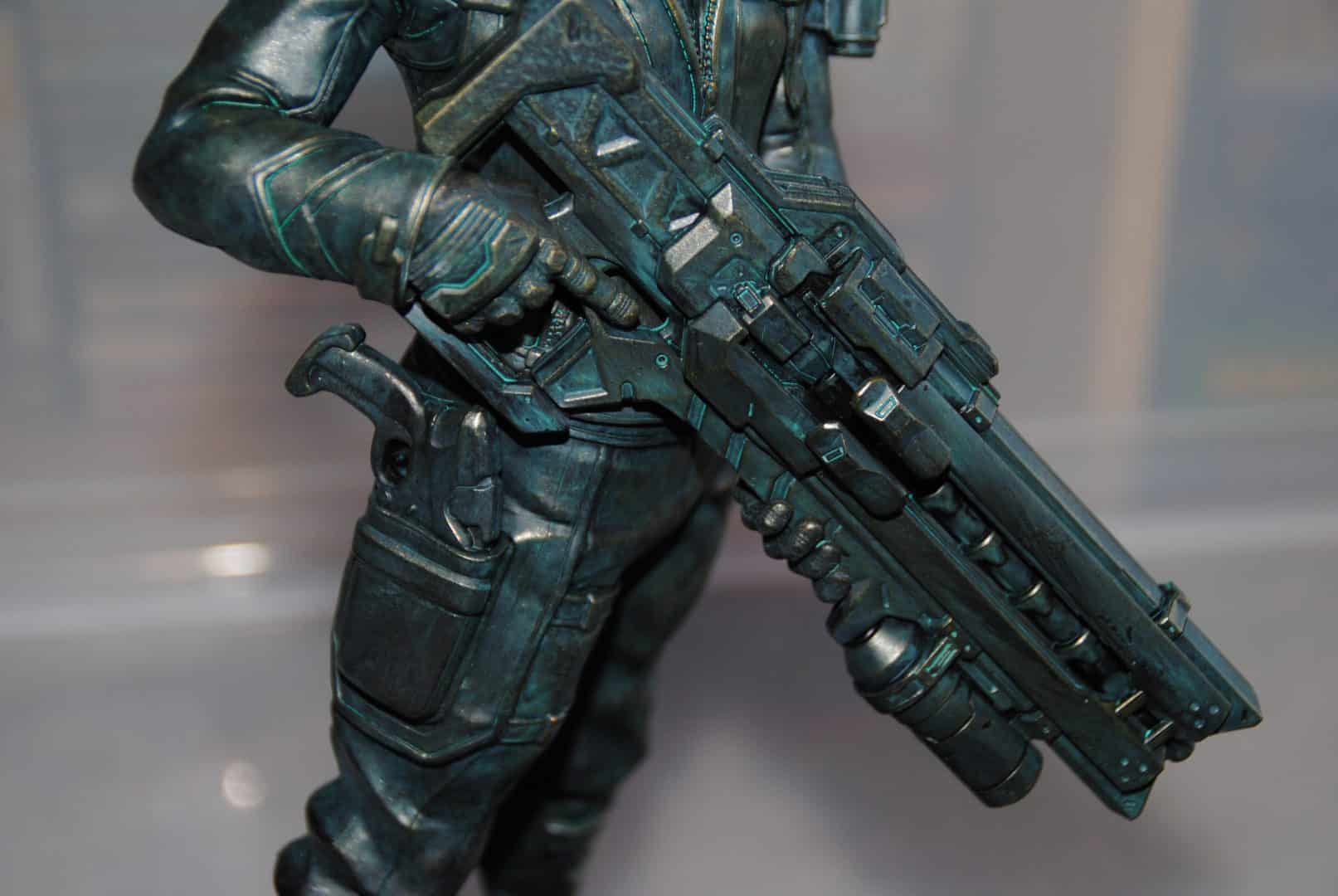 A closer look at the huge gun, it looks really good and almost as if it had been the real thing(?). 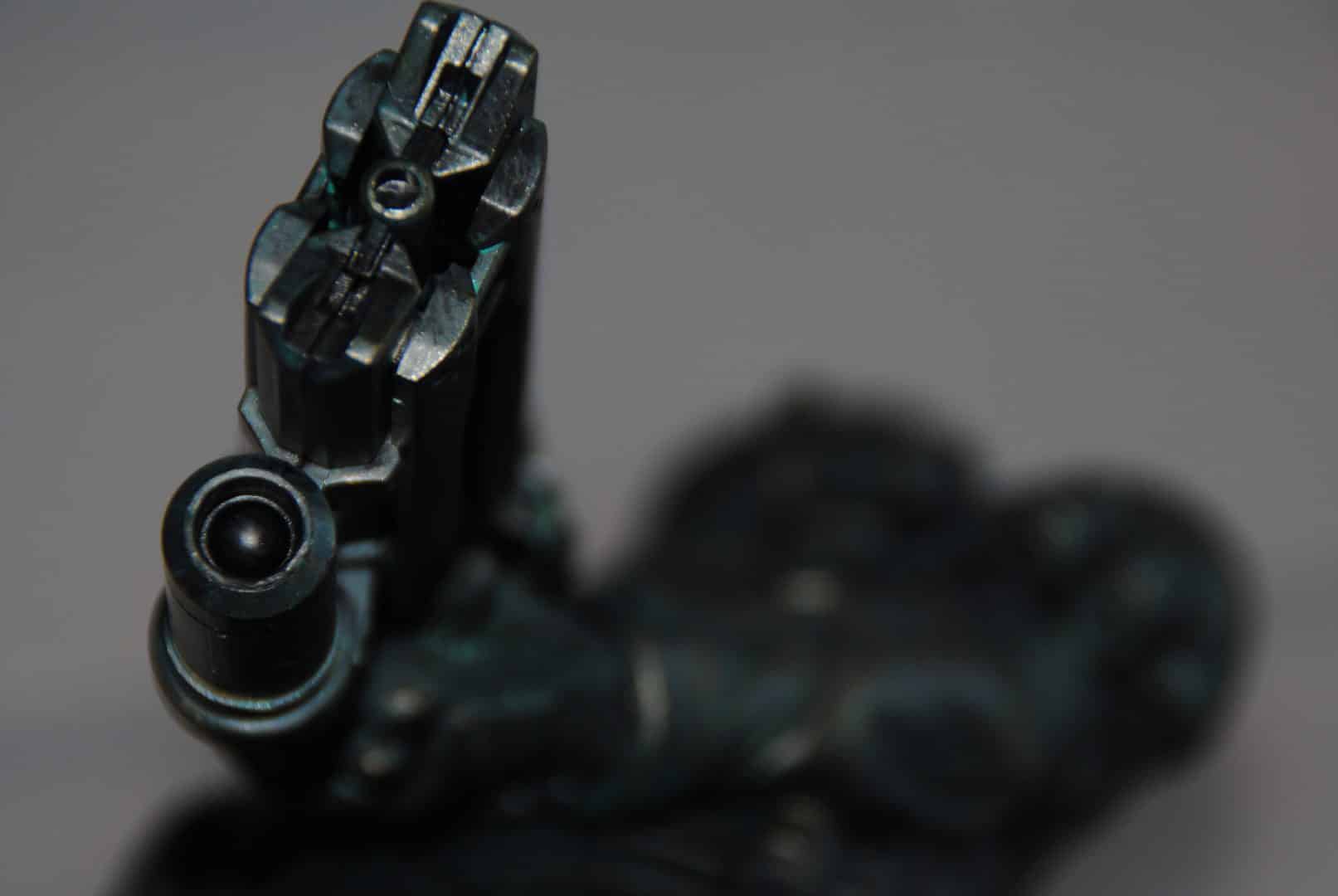 I just had to do one of these shots, of course, depth of field works really good sometimes and this time was no exception. 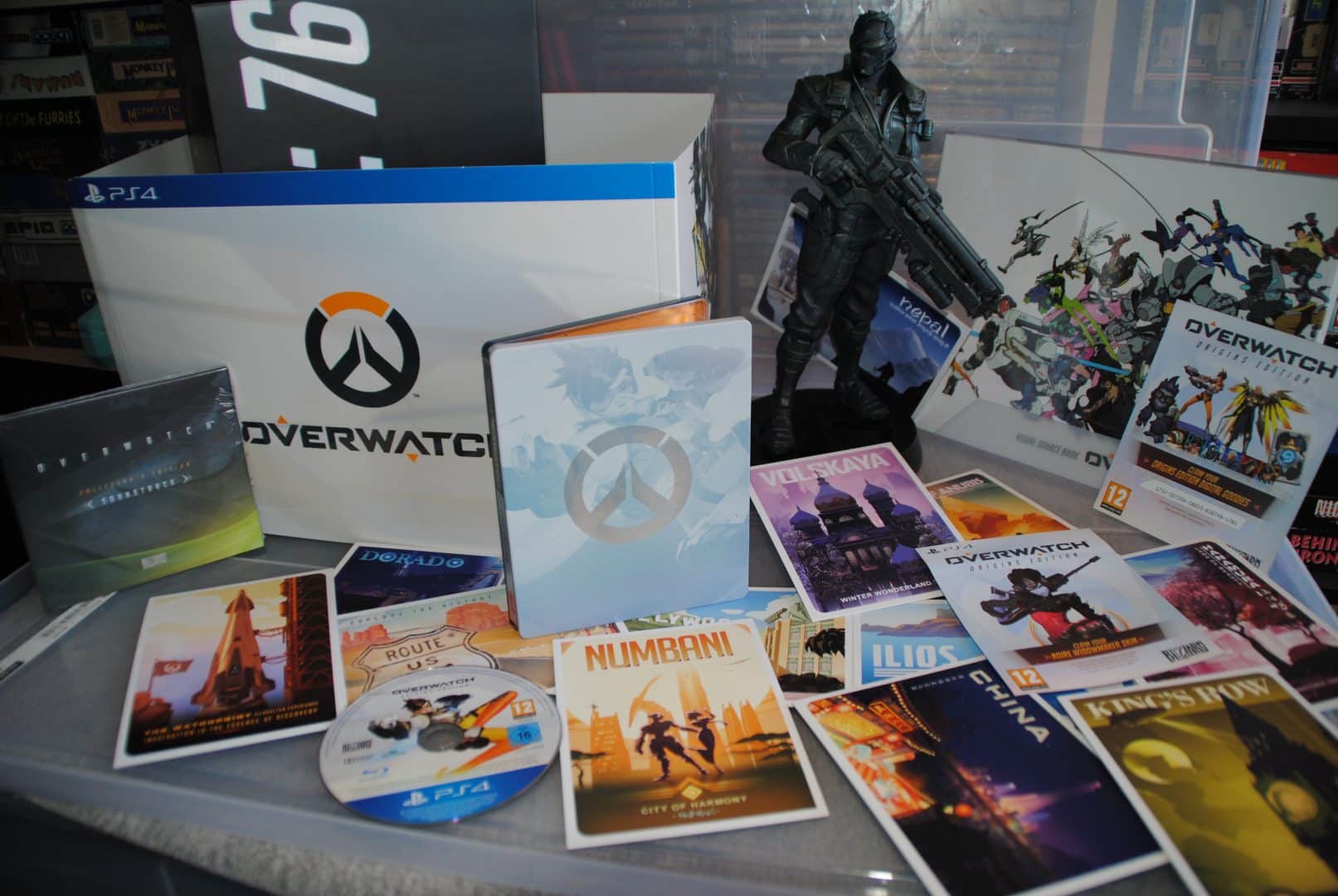 Ok, so this picture completes the article (as always), one huge box with a lot of boxes inside (sorry, no room to include them in the shot).

This OVERWATCH Collectors Edition has to be one of the best i have ever seen, yes i know i have said this several times before, but yet again the list has changed and this is definitely in my top 5 of all time Collector editions (only beaten by Darksiders 2, Elder Scrolls Online, God Of War Trilogy and if you have followed my blog over the years then you probably know the fourth one.