Persona 5 has been in my backlog now since the day it launched back in early 2017, Pictures was done right away and a game and box review was planned shortly after that… Now 18 months later and the game still hasn’t found its way to my PlayStation 4 drive.

The backlog is a bitch which means that there will only be a box review now and maybe a game based one later on if there are enough people asking me for one.

First things first, this Persona 5 Take Your Heart Premium Edition box is exceptionally good looking and while the pictures may look good and all, well let’s just say that they look much better in real life.

This edition comes in a strange uncommon looking box design, the usage of colours and art is downright brilliant and one heck of an eyeopener on the shelf.

Inside that awesome box/sleeve seen earlier comes this fantastic-looking inner box thingy, awesome art can be seen on all sides of the box and needless to say it looks like the artists used a lot of time designing it.

The colours, the style, and the quality is nothing short of awesome.

Everything inside the box is carefully planned and designed to fit the theme and style of the game and box, everything feels very exquisite and special.

The artbook is aptly called “The Aesthetics” and yes this is one of those books that you won’t put down easily, lots of pages, fantastic print quality, an insane amount of details and lots of interesting things to read and study for fans of the game and art style.

Definitely one of the best art books out there for a bundled edition.

Morgana plush toy anyone?, it might not look all that fantastic and it’s not one that fits in my collection in terms of OMG plushies, well that was until I saw what the actual prize this thingy goes for out in the open…

Supposedly a very “sought after” item and one that will most likely go up in value forever…  WHAT?…

How about this one then?

A very stylish bag, good quality too and with a typical Persona 5 thingy…

Yes, it’s a HIDETORI GAKUEN HIGH SCHOOL/ SHUJIN ACADEMY BAG, Very sought after and already going at crazy prices on various places on the internet, a rerun is being produced this summer and will be available soon.

The rerun edition can be pre-ordered from PlayAsia, but it ain’t cheap…

Another cool bonus is this soundtrack CD called – P5 Sounds Of Rebellion which use a different colour scheme from the rest of the box which makes it yet another win, they could’ve easily just slapped that big box cover onto it with a – Soundtrack – subtitle underneath.

A really good looking Steelbook + sleeve is also included in the box, the inside of it contains one of the best pictures of the whole box, but hey, i guess one could say that about everything in the box.  Outstanding Steelbook, a proper collectable, and one that i want to show to everyone. 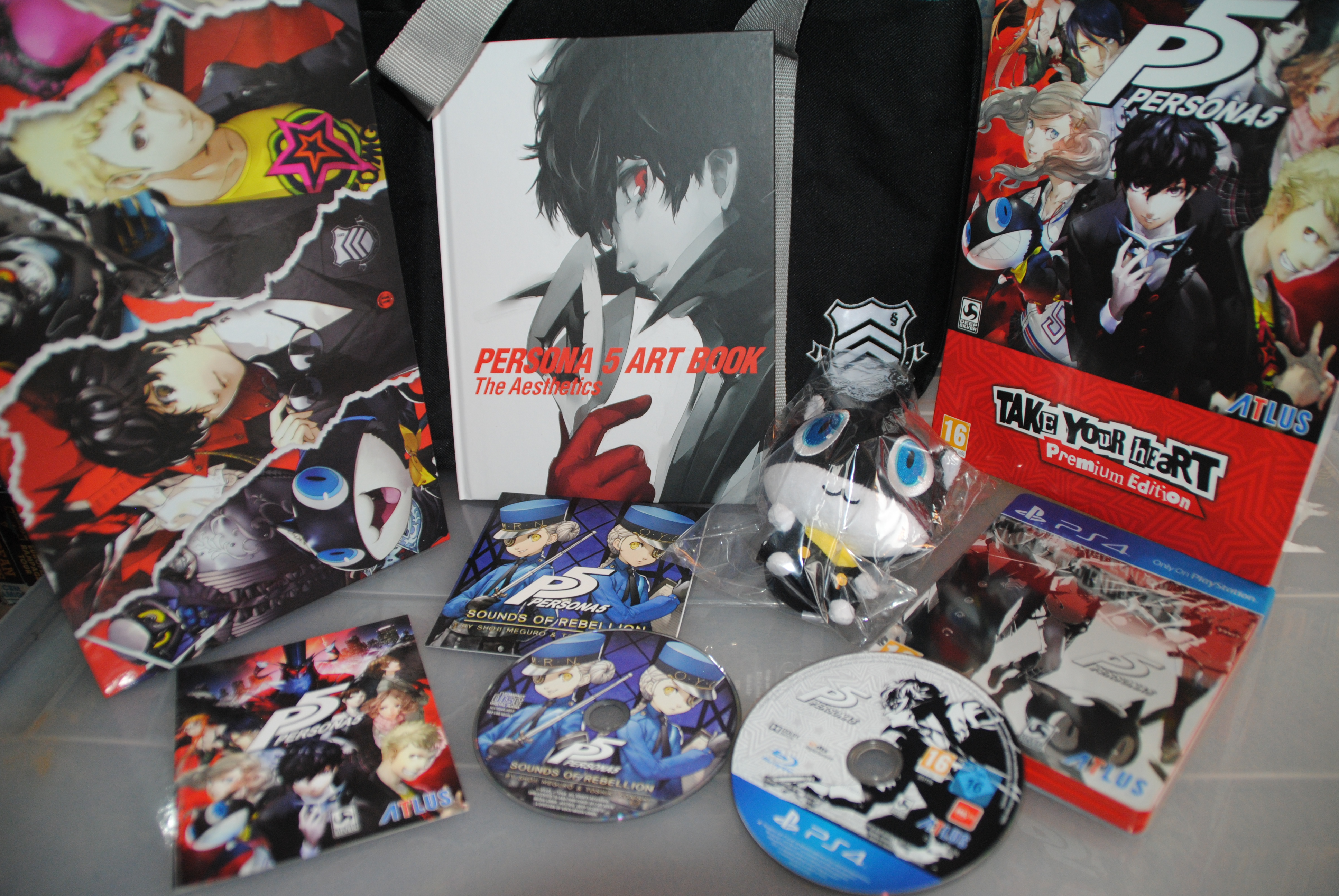 Persona 5 – Take Your Heart Premium Edition is nothing short of a colorful explosion, brilliant use of colours and the stuff that comes in the box ain’t far from fantastic but sadly the stuff included ain’t typical “put on display” items which mean the collector in me will let them stay in the box forever after, that said – people will use these items which means that the value of this CE will rapidly go up in value over the next few years.

2 thoughts on “A Look At: Persona 5 Take Your Heart – Premium Edition”