It is time to go back to 1993, a time when the Amiga had AAA studios still releasing games and everything looked absolutely brilliant. Digital Illusions had just released some news about two upcoming action platformer type of games and they also reported that their last pinball game (Pinball Fantasies was just recently released for the A1200 and CD32) was doing brilliantly and that it was time to try different genres too.

One of the games was Benefactor, a really good action puzzler game that a lot of people just blatantly seem to have ignored and the other one was the unreleased game (but finished(?)) Hardcore which most people think of as what could have been the one game to dethrone Turrican II from being the ultimate run and gun game on the Amiga.

One year went and…

The last thing we heard about the game was that Hardcore had been cancelled by Psygnosis along with another game called Malfunction, neither of the games would be released… Rumour has it that an incredible 13 games from Psygnosis were cancelled thanks to them going away from the 16bit era and into the 32bit one (PSX/Saturn etc).

15 years later we all of a sudden got a reminder from the original developers when they (out of the blue) showed Hardcore at Sweden’s largest Demoscene party, the version they showed was the (also unreleased) Sega MegaDrive version and not the Amiga version but it gave us hope that they had the Amiga version somewhere too.

It then became very quiet again, this time it took 7 years before we heard something official, a teaser trailer was released and an announcement but still no mention of the Amiga version though.

Guess what… it became quiet again.

A year and then some later (March 2019) the game got released but… only for a console no one has ever heard of (well, me at least), a console called the Mega Sg which sounds like a rather cool console and one that I will look more into at a later stage.

And then this happened…

Woohoo, a whole new trailer… or wait, it is almost identical to the old trailer but now it has changed the name to ULTRACORE and yes the tank styled top-down driving sections are gone from the trailer…

Pre-orders up for PS4, Vita and the Nintendo Switch is a very welcome thing and as soon as I saw the video I rushed online and pre-ordered it.

Then the day came, it is a few weeks ago now but still fresh…

The Collector’s edition comes in one of those Strictly Limited boxes with a slipcover on them, that said, this one is much better than the awful Ninja Warriors Uhh, Ninja Saviours black box.

Well, at least for the front anyway as the backside is as you can see yet another awful one where it is just black with some stripes on it and yes, in German…

The box itself looks much better than the slip slipcover and one has to ask why on earth there are variations of the very same box, but then again, just you wait until you see the actual Blu-Ray box.

The quality and presentation of the box itself is good and will most likely tolerate heavy use which is good.

This is what you see when you open the box, lovely pixel art inside.

Strictly Limited included a postcard from them to us, 5 months or something delay and all we get is this? – oh well, we got it in the end at least. 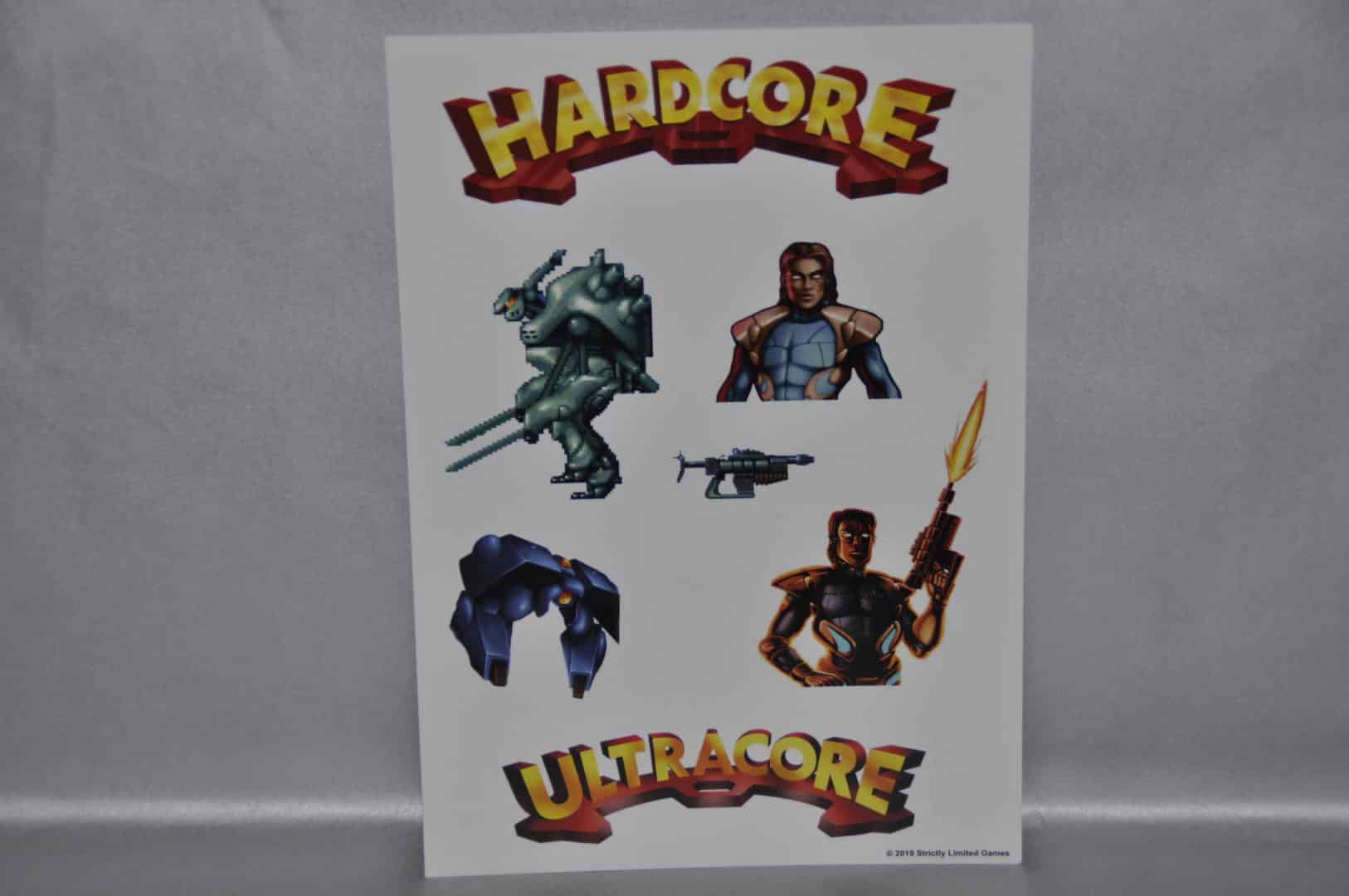 A bunch of stickers comes with the box too, some really good… others not. 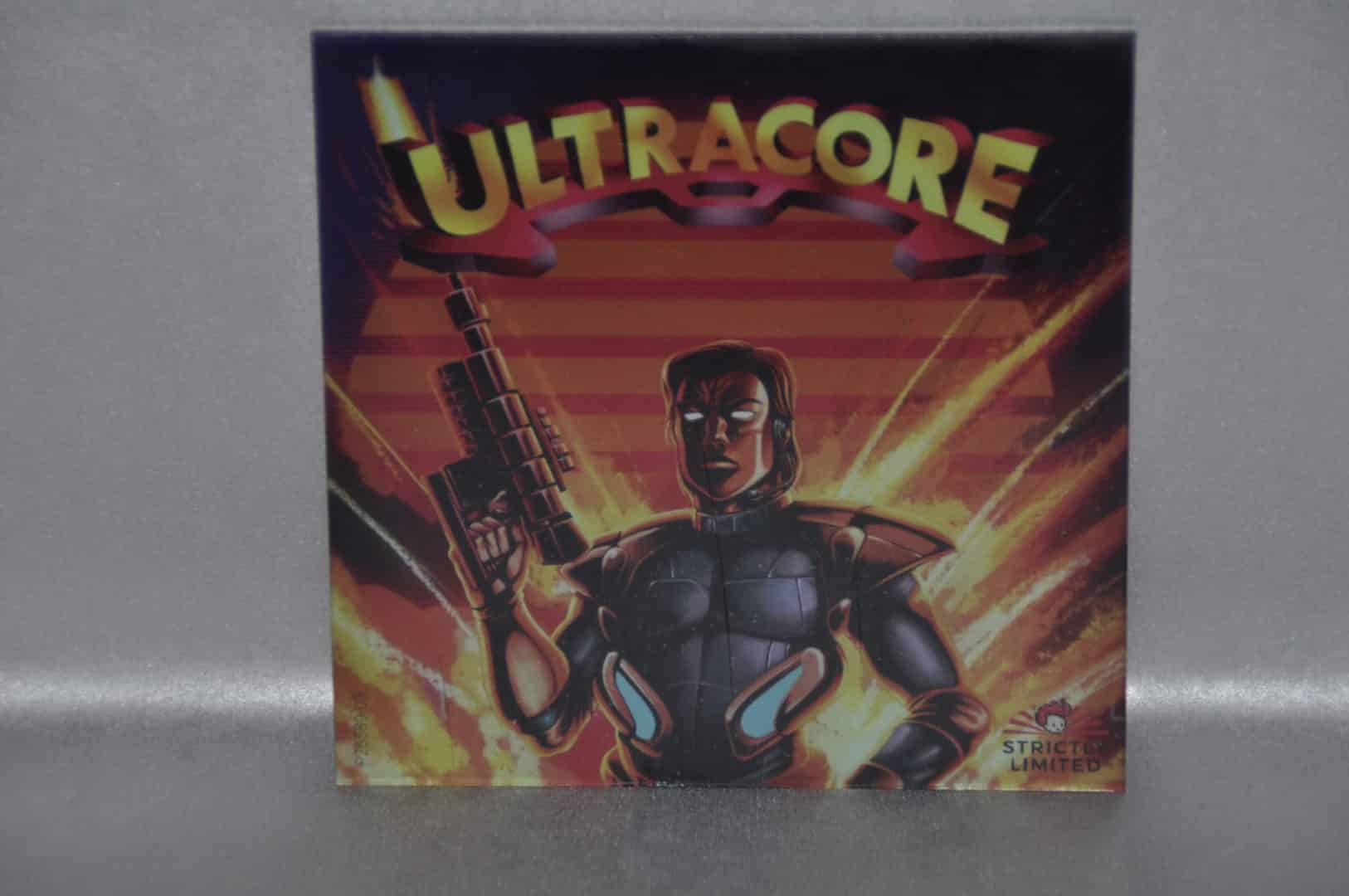 This might look a bit faded but it ain’t, there’s a small plastic film on it and I have decided to not remove it for now.

What is it though? – maybe it is a coaster? 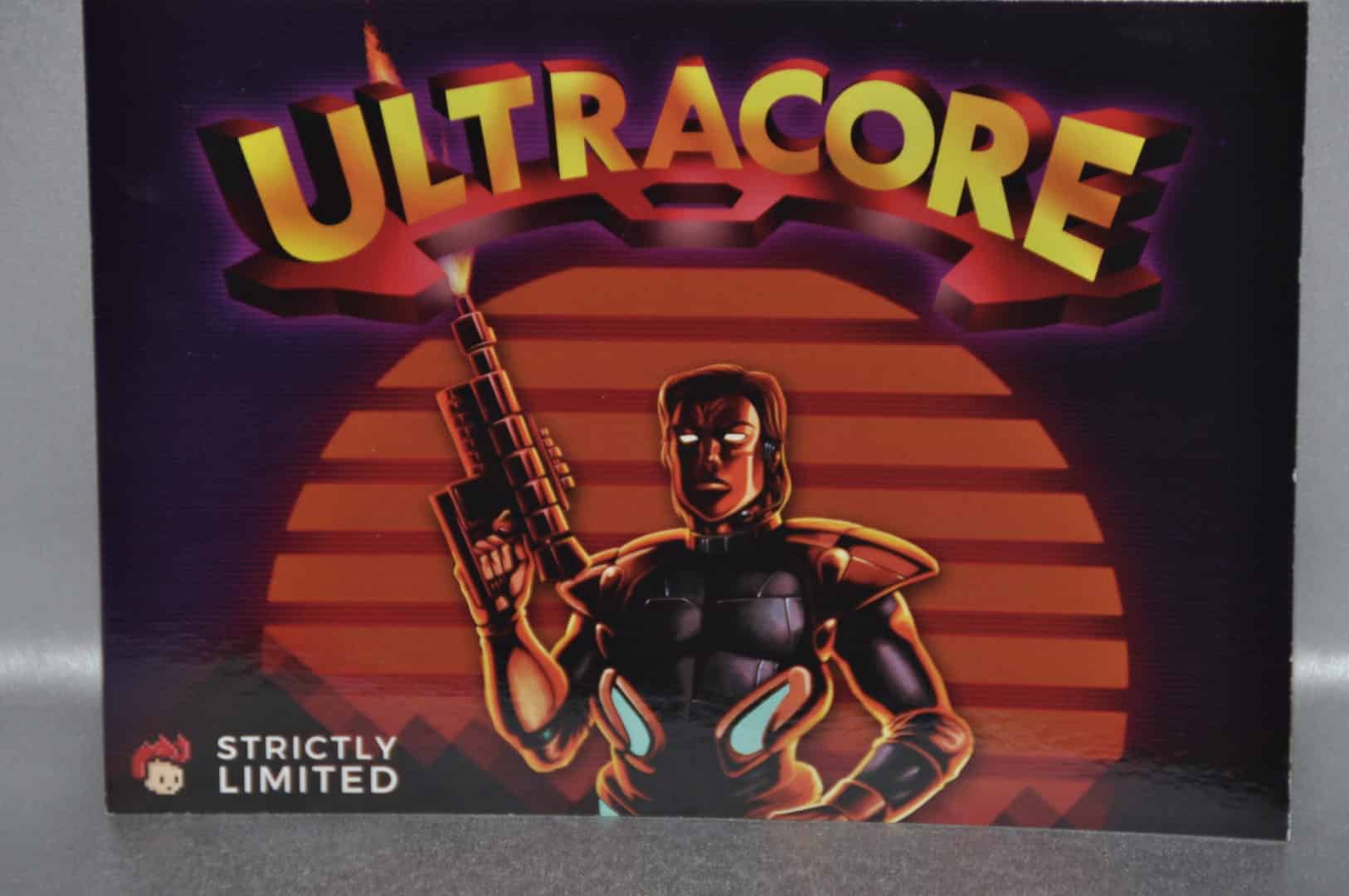 Another postcard and this time a really good looking one. 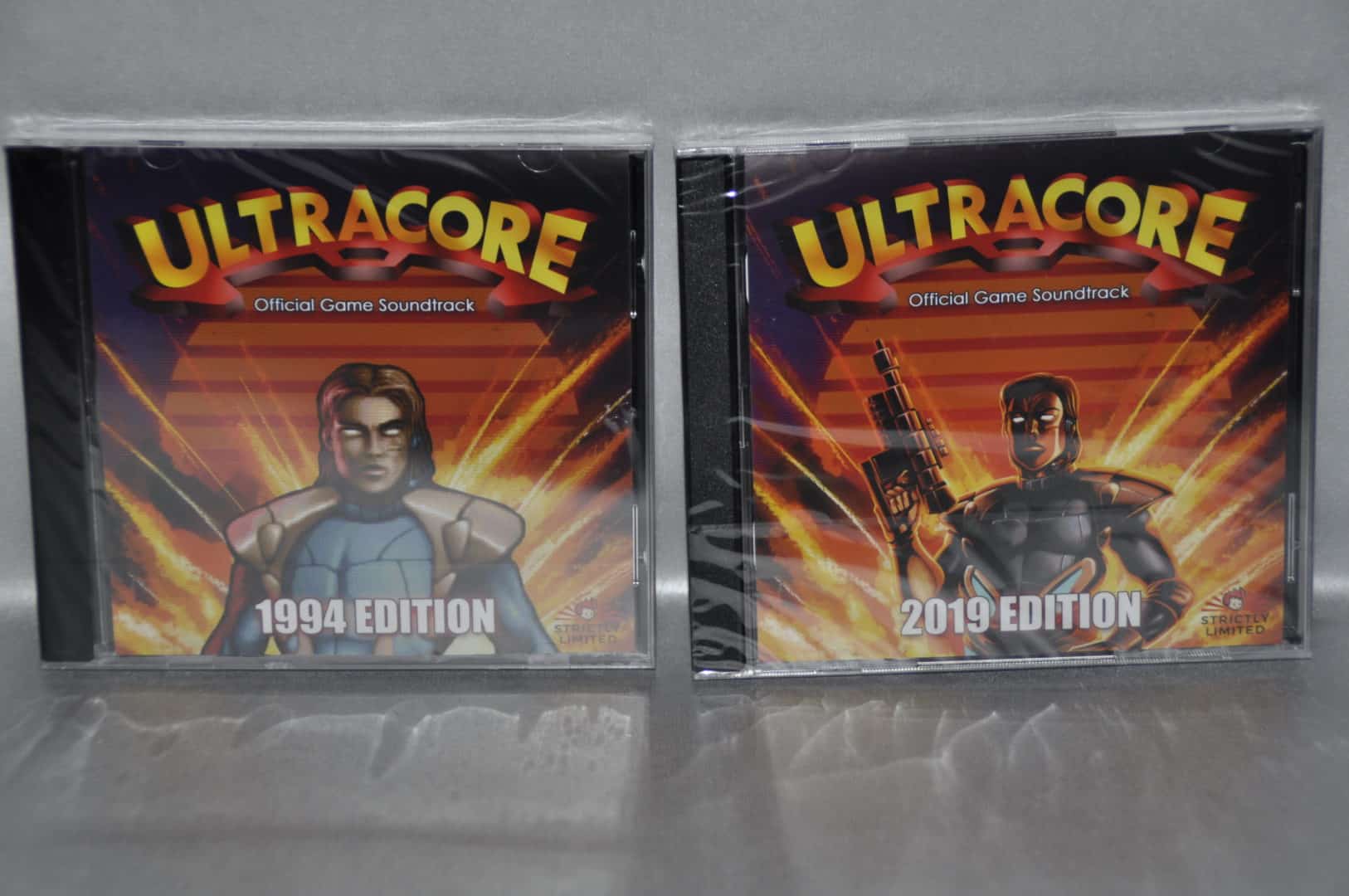 The box also includes the music from the game and best of all is that both the original music and the new music is included.  The 1994 edition is on one CD and the 2019 edition comes on two CDs. 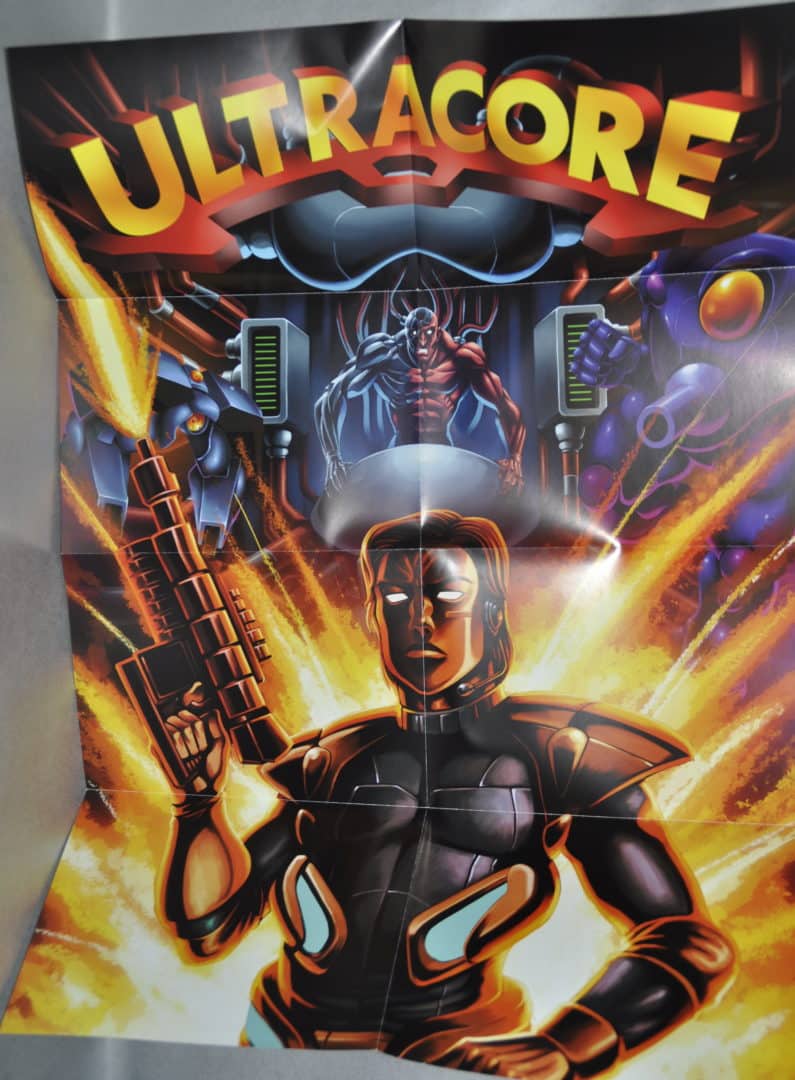 A huge poster is also included in this Collector’s Edition, love the look of it and the print quality is really good. 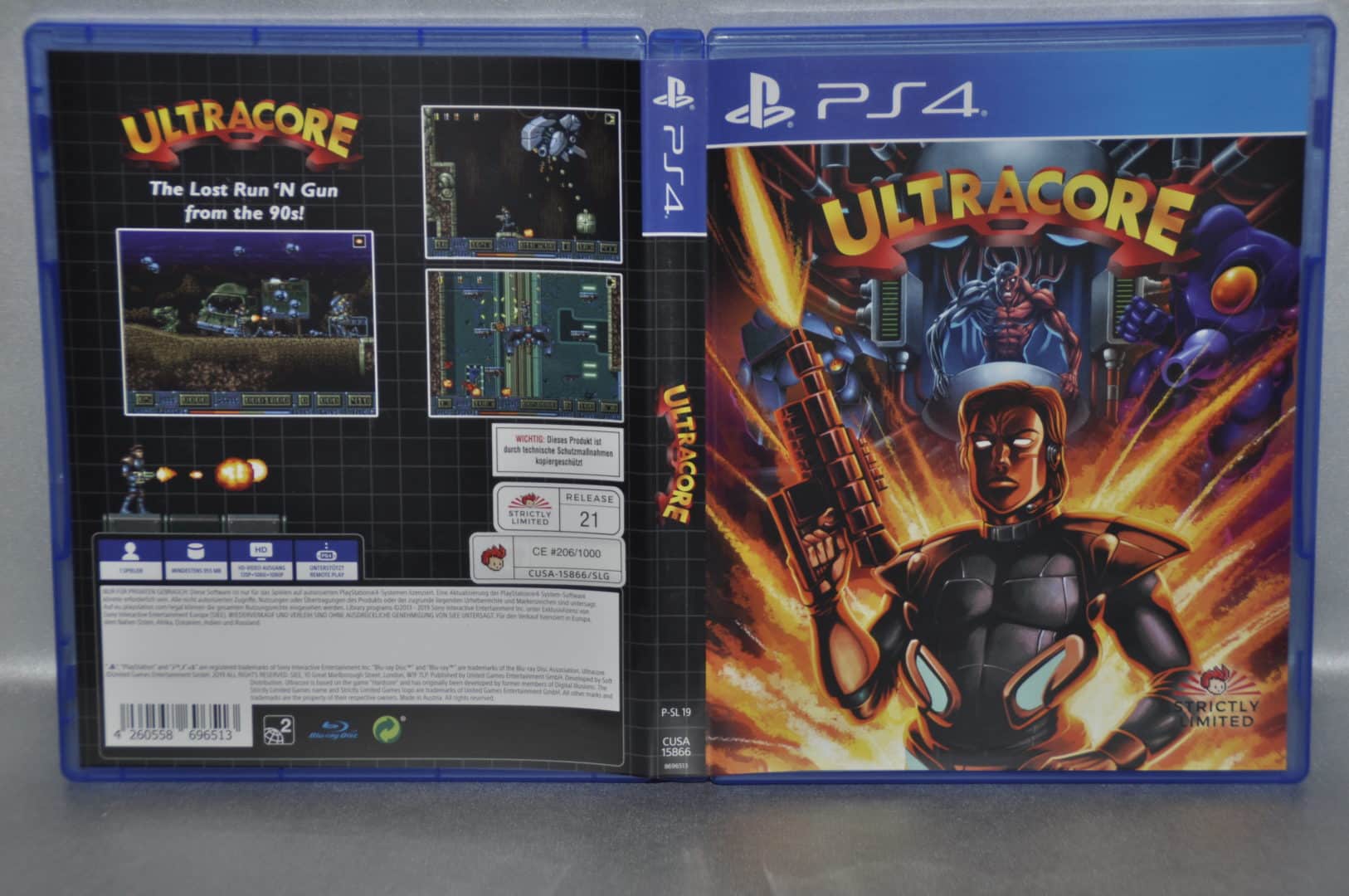 Here is the Blu-Ray cover I mentioned earlier, why on earth doesn’t the slipcase got this art style on it? – It looks brilliant and just the way I would want it, not some stupid black page with some white lines on it. 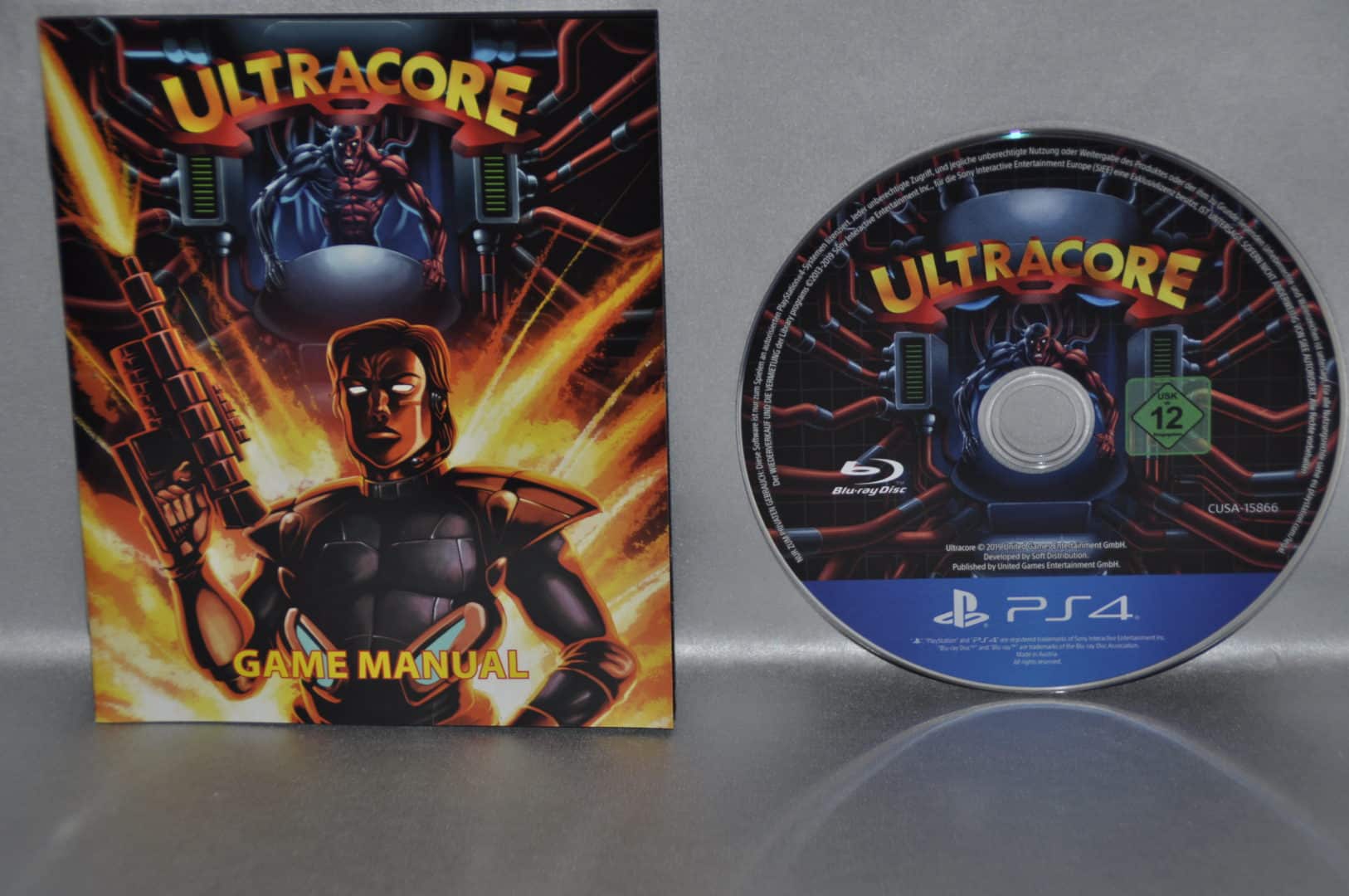 Manual and CD looks great too, good to see they used different pictures on them. 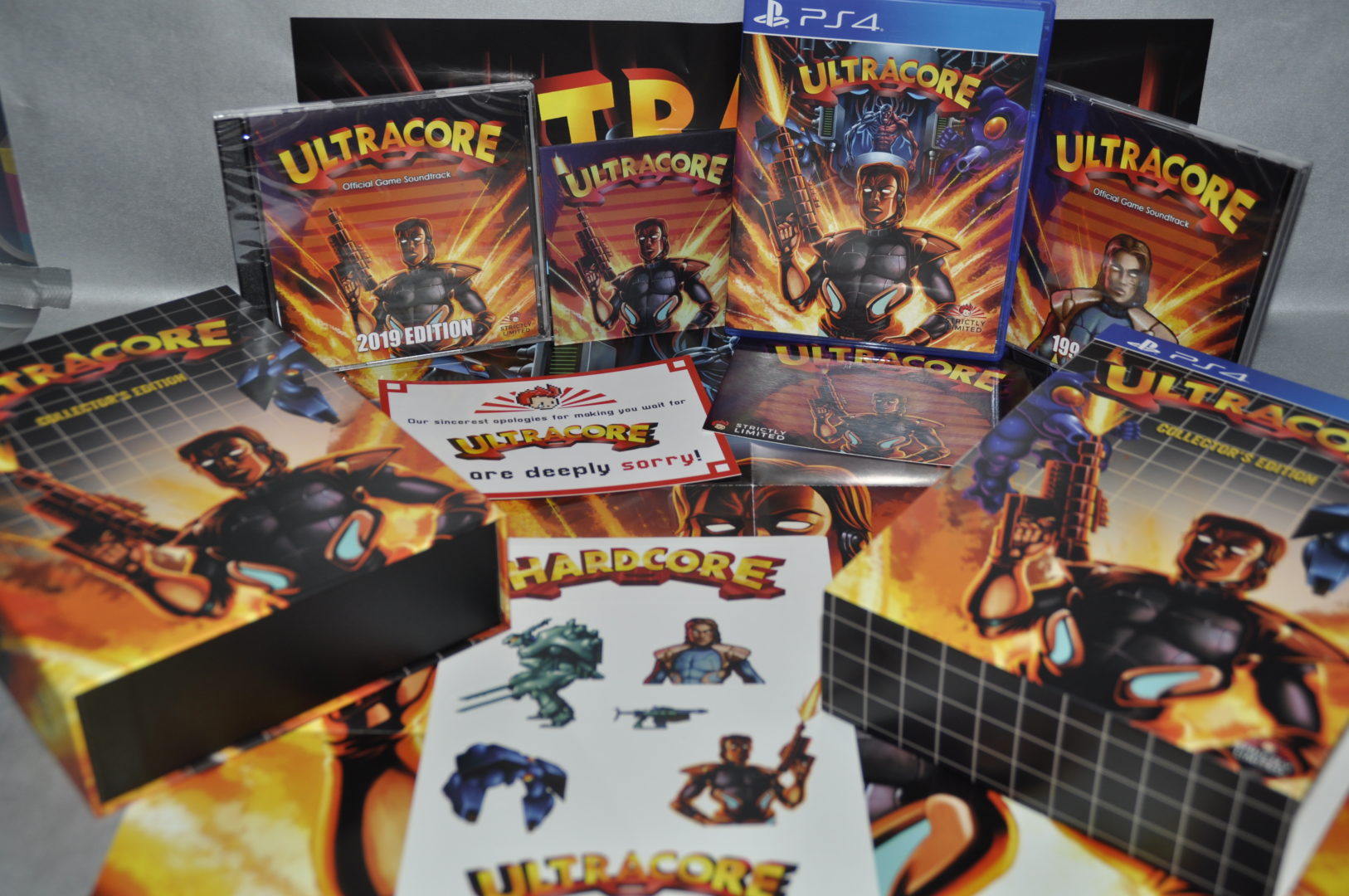 Here you can see all the stuff that comes in the Collector’s Edition box, if it was worth it or not remains to be seen but as most know I was more interested in the game than the actual CE but decided to go for it to show my support.

So, what about the game then?

Well, Ultracore is very similar to a game I wrote about last year, namely Land Of Genesis and I am pretty sure they could have used the same engine if that was a thing but as we know, this was an Italian game and Hardcore/Ultracore is a Swedish game with 6+ years between them.

It looks great, it sounds great and it plays somewhat good until you get to level 2. 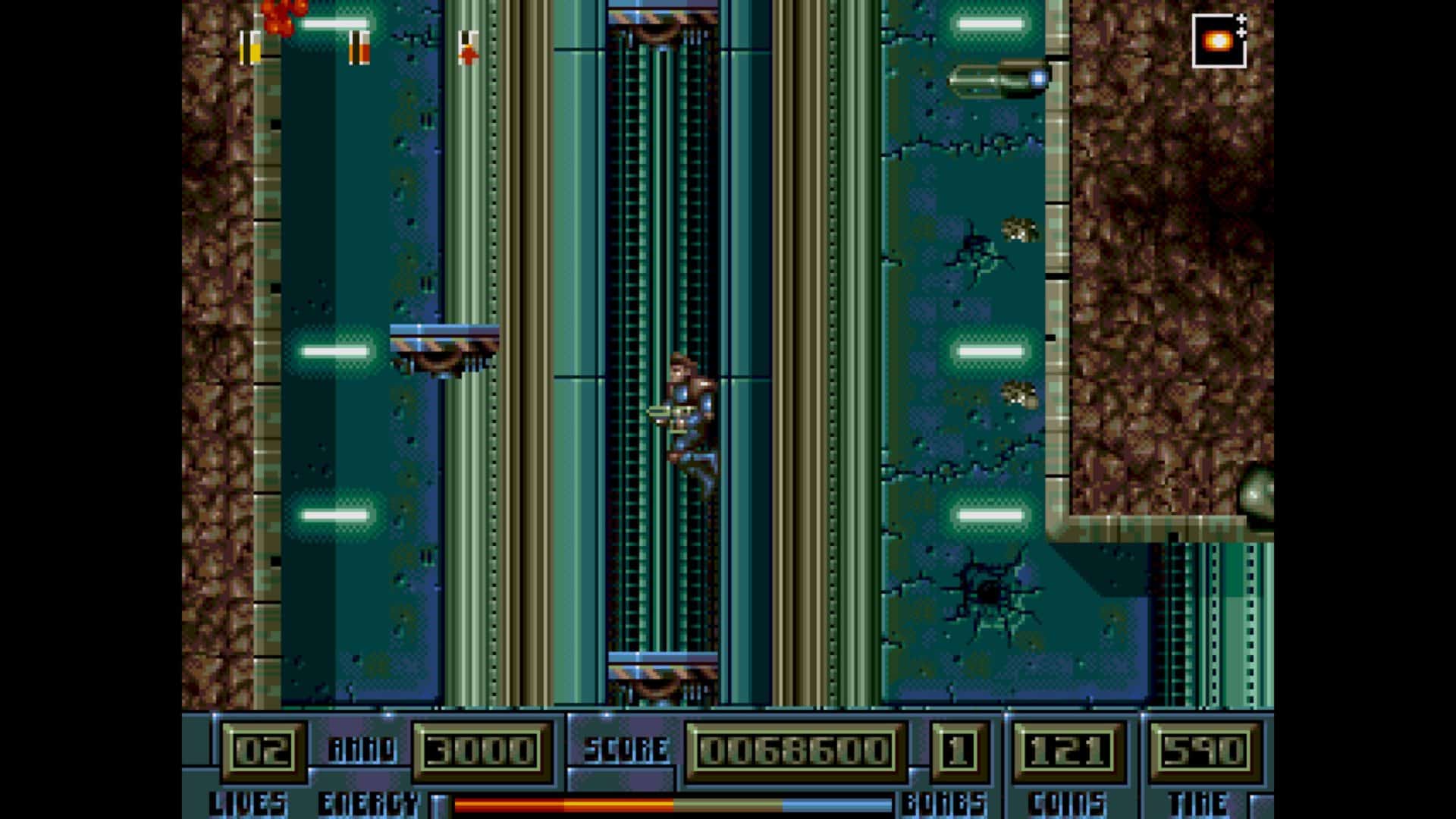 What happened on level 2 then you may ask?, well, I got stuck and have been stuck for a while as the game is hard and yes it asks you to do impossible jumps that I can’t understand how to do.

Such a shame that I hit this problem and right now I wonder if it is a glitch or something, I replayed the game 4 times now to this location and yes, I simply can’t get past it and I wonder what the hell am I supposed to do here.

In the manual, it says you can reach new heights by using gravity and movement of the ramps but no matter how much I have jumped I still can’t make the jumps and therefore I die.

The game is old school styled so you got only a few attempts before it is game over and then you have to start from scratch, that said, there are some insanely long level codes that you can type in but you will still have to play all the way to where you got stuck earlier anyway and yes the levels are long, very long, too long if you ask me.

It is not all bad though as the game is actually silky smooth (60fps?) and fun, loads of weapon upgrades and bonuses to look for and as with every DICE game out there, there are easter eggs everywhere.

You can choose between the old MegaDrive/Genesis music or a new nextgen 2019 music and while both are enjoyable I have to admit that I prefer the new music as it is much more pleasant to listen to as I got problems with listening to MegaDrive sound for a longer period of time.

Such a shame they didn’t include the superior Amiga music (yeah, what else is new, Flashback, Another World, Prince of Persia and so on says hello…).

The best part with the game is the controls and the way they turned the game into a Twin Stick shooter and put optional jumping and special weapons on the shoulder buttons.

So, here we finally got Hardcore or rather Ultracore as it is called now, a game that I have been waiting for since early 1994. The soul of the original Amiga/MD game is still here but it has changed to something better and worse, it looks worse on the flatscreen TVs for sure but the controls are better than anything they could have pulled off back then for sure (especially on the Amiga with the 1 button situation). I wish I could play this game on my CRT but my PlayStation 4 only got an HDMI out port…  As for the Collector’s Edition box, it is OK I guess, far from what I expected sadly and something I would not recommend to others out there which means that you should just get the game instead of this CE box.

One final thing though, the Amiga version and what happened to it? – Well, we will know one day I guess and yes I won’t give up the chase until I get it.