You might remember a post about the return of Mutation Software (and how he planned to re-release some of his old games to test the market)  that I did a while back, well, the games launched a few weeks ago as planned and best of all is that all 3 games sold out in a matter of hours. This is probably where some of you will go – Oh no!, I forgot to order the game or whatever, fear not as Adrian is already hard at work doing a second run that will be ready early next month.

I’ll start with the game that I like the most of them, a game I have always had a soft spot for, the platformer Tin Toy Adventure. 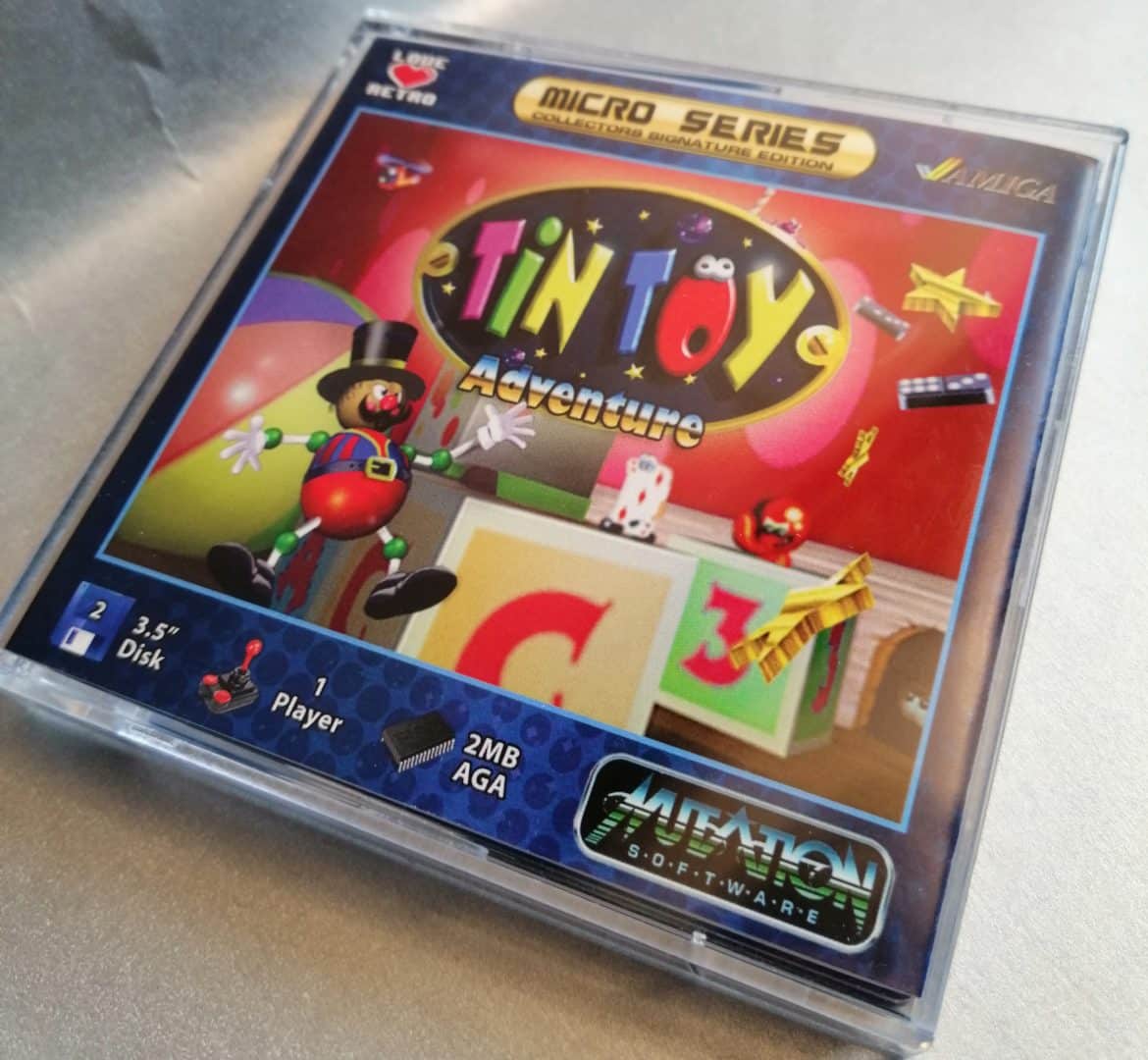 The first thing that you will notice with these Micro Series games is the boxes and format they come in, tiny jewel cases that are unlike any I have seen before and I must admit that I expected these things would come in a traditional jewel case box or whatever.

The jewel cases are just about the size of a floppy disk, the build quality looks solid and of proper quality from what I can tell (for now).

The box art has been changed since the first release (the one from 2006, more about that later) and while I liked the original box art it has to be said that this looks way more professional and in line with what to expect from someone today. 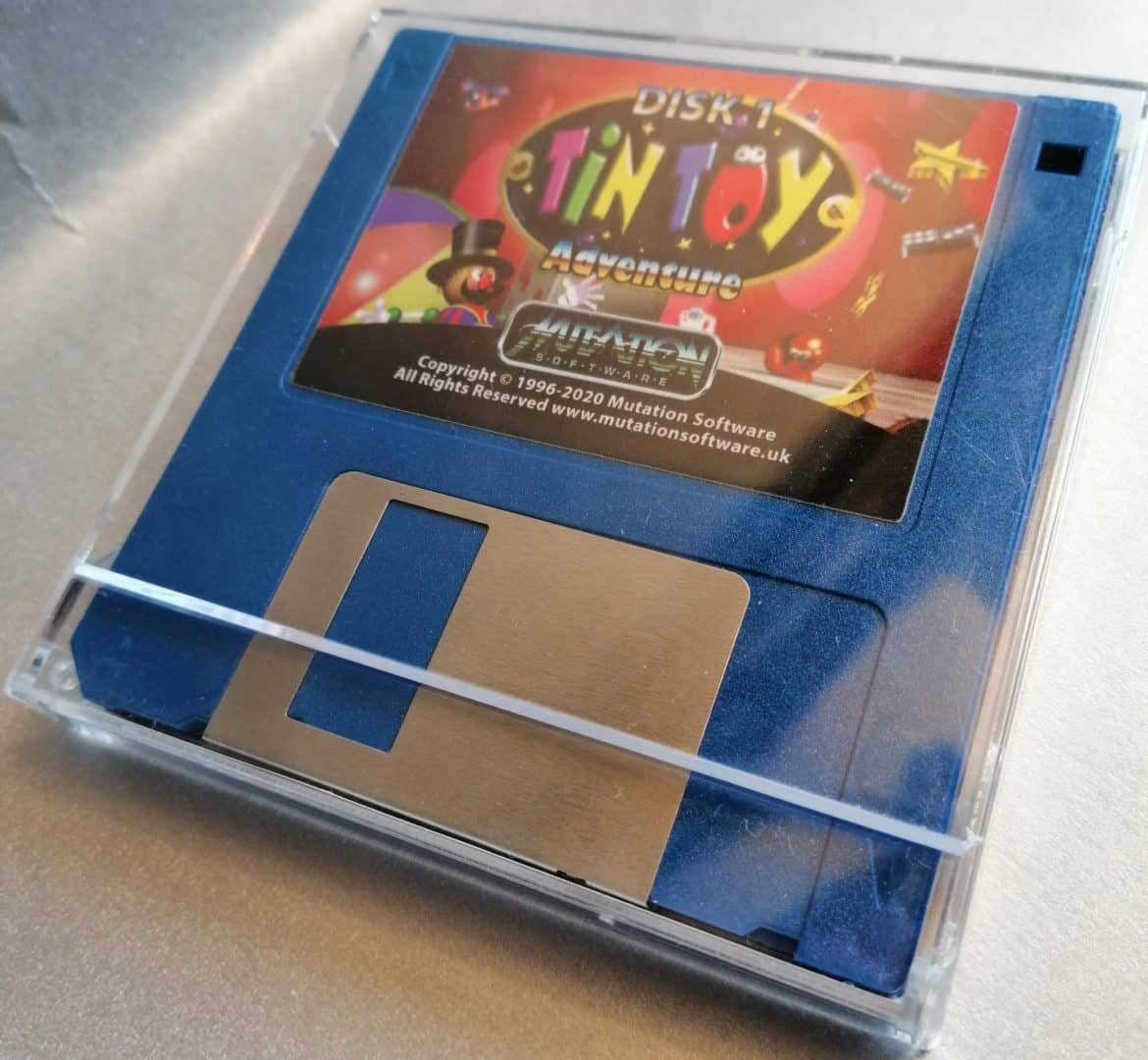 Tin Toy Adventure comes on two floppies and this is the maximum of floppies that you can have in these boxes.

The downside with these boxes (so far) is that you can’t see the backside of the cover as the floppies are on top of that so you need to take the floppies out to look at it. 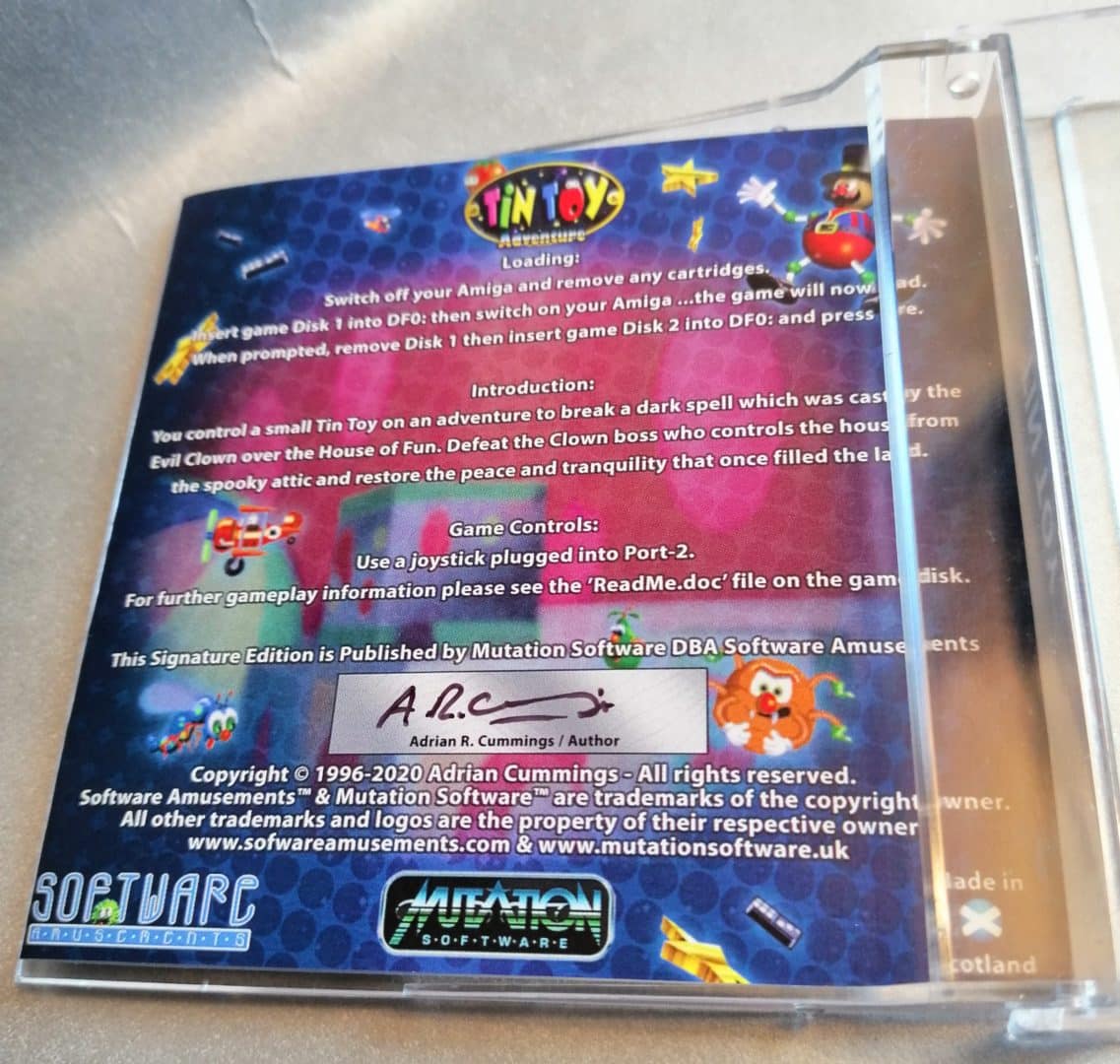 Here you can see the backside of the box, no screenshots or such and there ain’t a manual either (beyond a few lines) but then again, who needs that for a game like Tin Toy Adventure?

It has to be added that there are instructions on the first disk as well as a Harddrive installer so al in all there is no need for a printed manual. 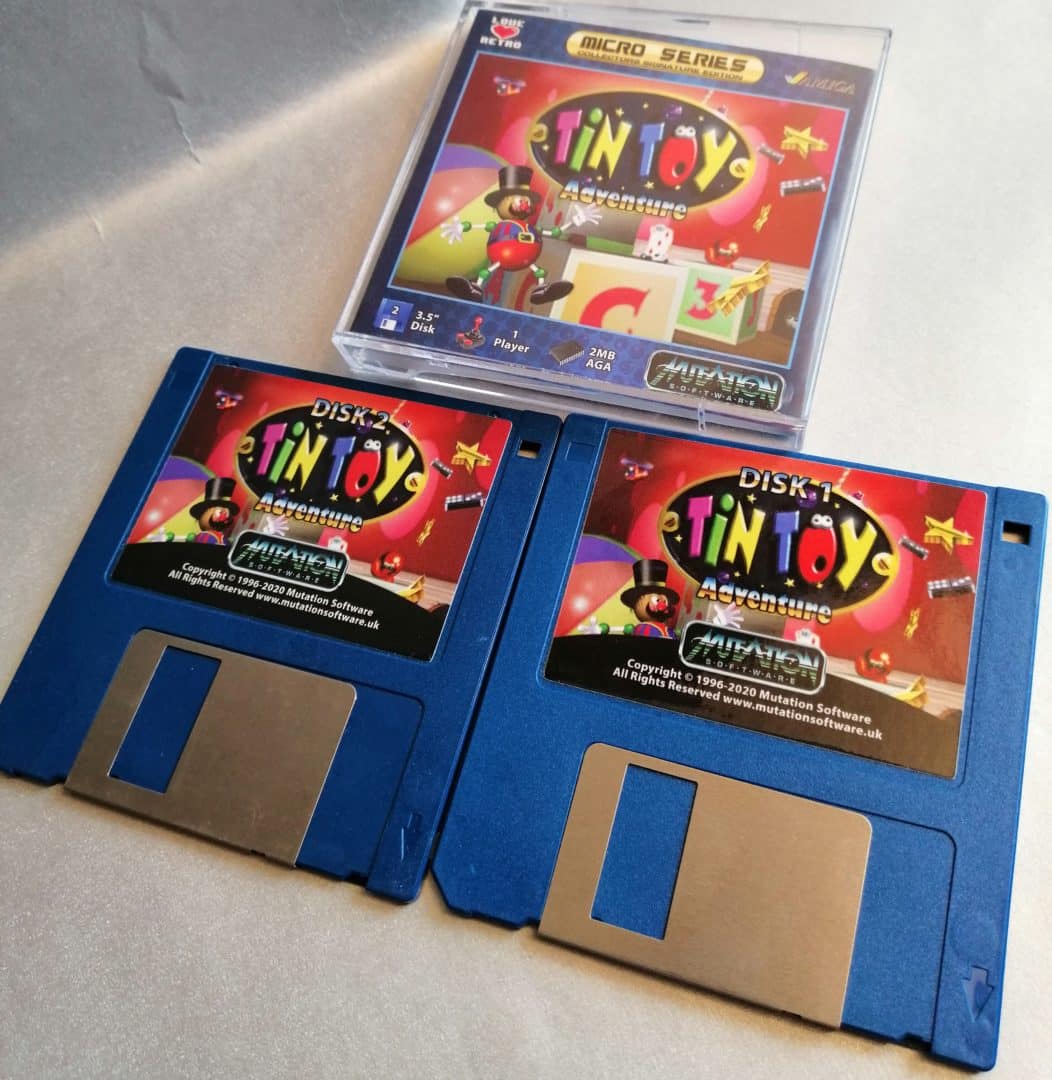 The floppy labels look great and feel very well made too. 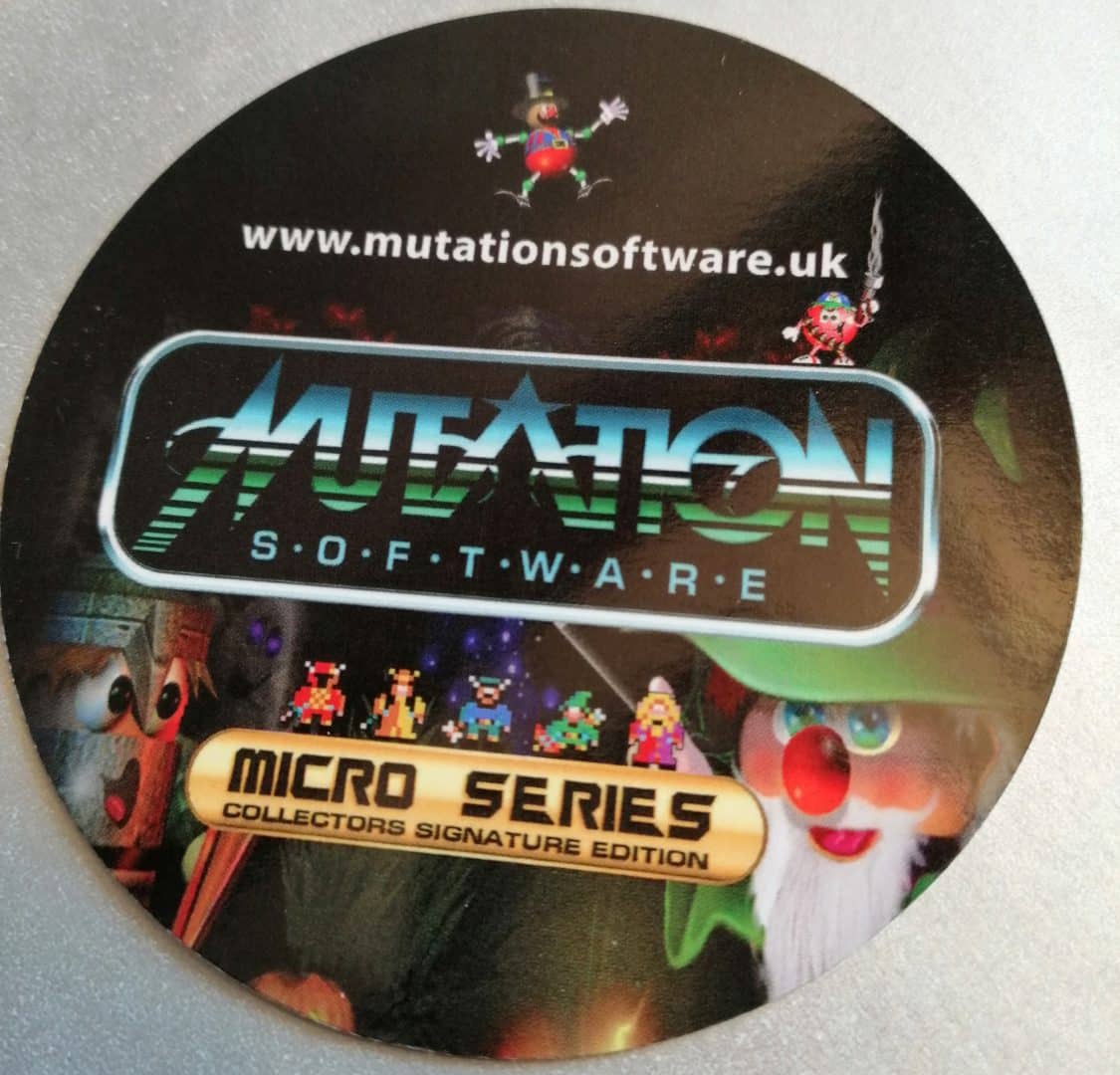 Every box comes with a sticker (i thought it was a coaster at first), it shows a picture of their next product, a game called Viz and will be a brand new game for our beloved machine.

I also got the original versions of the games and would like to show some pictures of how those boxes look and why I wanted to own both (and most likely you want that too after seeing this). 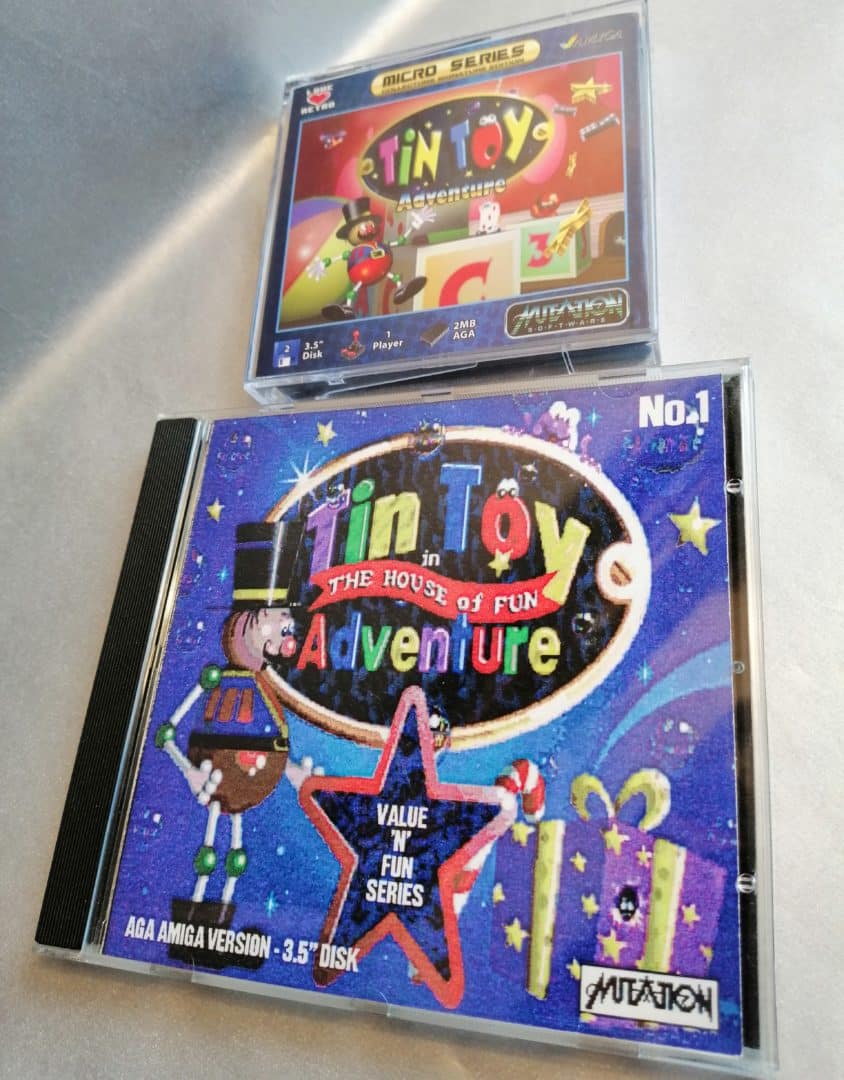 The first version came in a traditional CD case with completely different art and as you can see the print quality is far from the 2020 version.

This is the inside of the CD case, the floppies came with a simple label and funky attachment system for them to fit in the cover.  The backside is the only downside (again) which yes, will only show you the floppies and not screenshots or whatever.

I urge you to go grab the game if you haven’t done that already, a solid game and the new box is well worth it too.

The second game in the series is Tommy Gun, a crosshair shoot em up.

I never really fancied Tommy Gun all that much, I mean the graphics and style are good but the gameplay never appealed to me even though I like games like CABAL and Operation Wolf and so on, but yes I still had to get this new version too (of course).

Really good looking cover art on this one, love the use of colors and in my opinion the best looking one of these three new releases.

The game comes on one floppy disk and as with the cover art, the label looks fantastic.

The backside is also colorful and good looking.

The third game is a game called Castle Kingdoms, a game that many probably never played but should give a chance as it is a solid game that deserves more recognition thanks to its action-adventure RPG-ish feel.

The box art Castle Kingdoms is like the two others really, well designed and good use of colors and style.

The front is my favorite for this game but the more I look at the floppy the more I like it too.

Really solid title and I urge you to go online and order it right away.

Ok, so that’s all 3 games for now and as mentioned they are all re-releases and games that many have already played in one form or another but now you got the chance to show your support and own them. 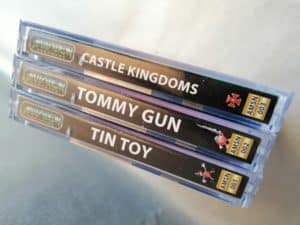 Oh and yes there is one more thing too, they all come with a matching spine which means that all collectors out there will want to get every game in the series right away so there won’t be any holes in the collection further down the line.

I never did find Tommy Gun and Castle Kingdoms boxes back then but luckily I managed to buy the compilation Mutantology a few years later.

The compilation itself is fine when it comes to the games, I mean, wow 10 wicked games and three of them are commercial titles and yes it also got the amazing Blitz Bombers and Dream Cars on it but I always had the impression that this compilation was a bootleg one with its bad print quality, bad CD-R quality and yes a Label on it that looks horrible. Epic Marketing and Alive Mediasoft spring to mind here. 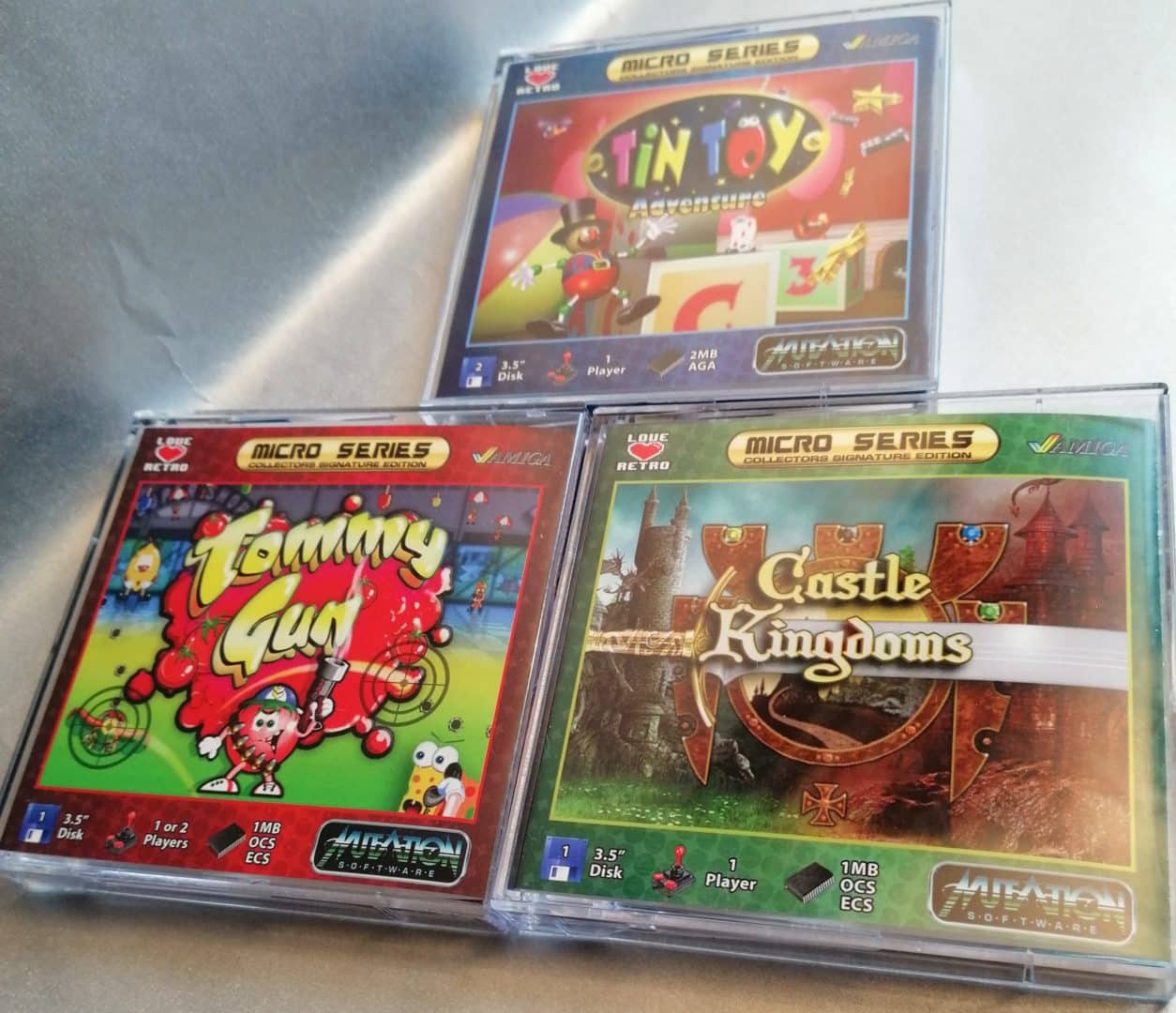 Go online, order these 3 new re-releases from Mutation Software website right now to support and to show that the Amiga is still alive and that it might be worthwhile to develop brand new games for, they ain’t expensive and you can even buy them as digital downloads too if you got no room or interest for the boxes.

For Prices and more information go to the Mutation website.