It is not often that i write about magazines anymore on the blog, and when i checked now i could only find a total of only 3 articles on the topic. I must admit that my love for magazines have faded over the years due to the fact that there ain’t anything out there anymore that i subscribe to, well except for Amiga Future which i have written about twice already. I rescued a lot of mags a couple years back too....

In most cases i never get free stuff as there’s always someone faster than me…. but, sometimes i find things like this and albeit not an amazing lot i still cherish it more than most seem to do.

My latest find was a small lot of magazines from the 80s and early 90s, a very focused period by the look of things (every issue in here is more or less from the same period across all formats). 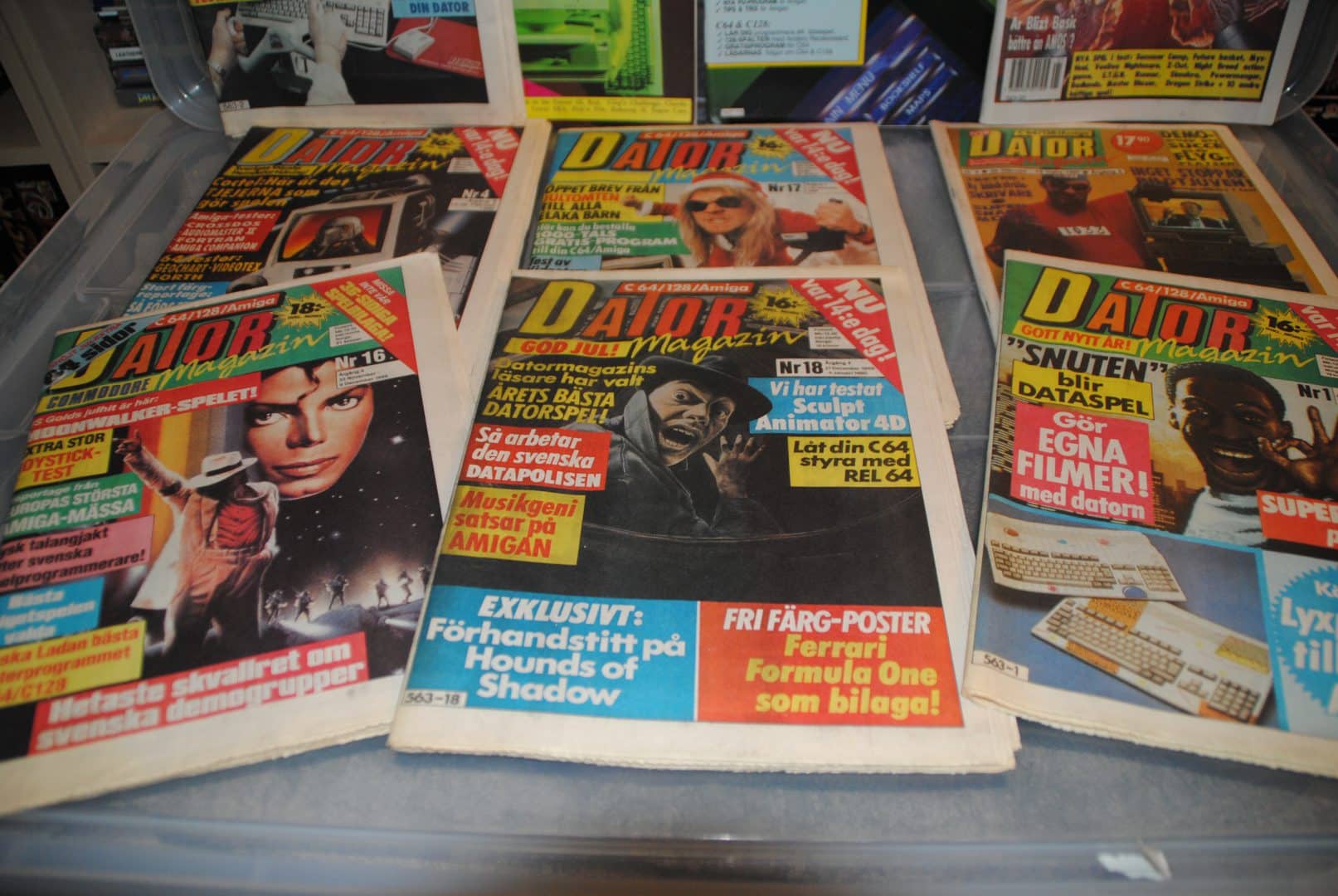 First up in the pile was Dator Magazin, a Swedish magazine that started in the small with a newspaper look a like format and eventually went towards being a standard magazine over the years. 4 major changes in looks were made over the years, this is the second change that is pictured above. 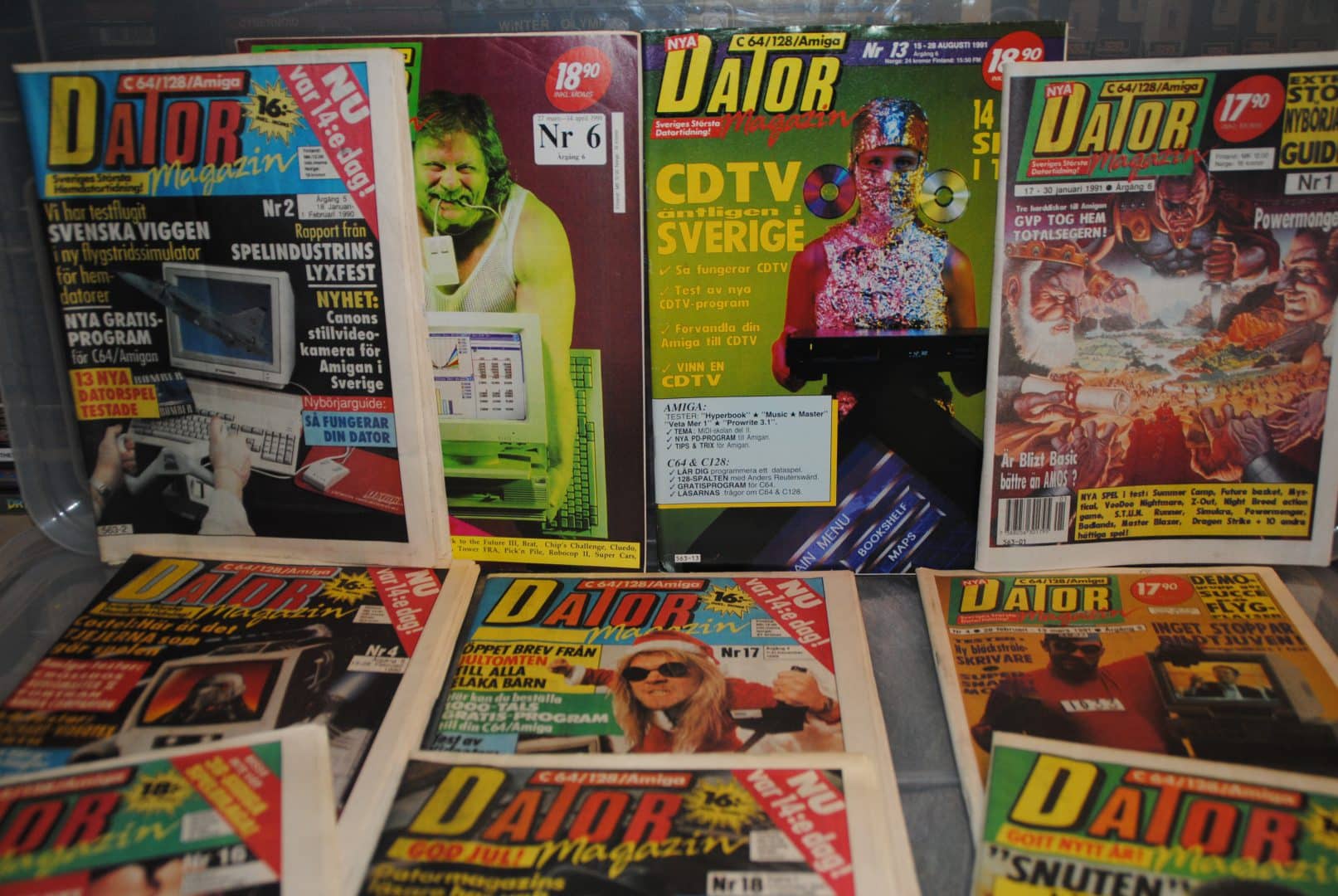 It eventually came back for a 5th generation too but i have yet to find one of those and to be honest i haven’t looked for one either due to them only covering PC.

The state of these 10 magazines are as to be expected from 25-30-year-old magazines/newspapers, best of all has to be that they are complete, as in no missing pages or whatever.

Oddly enough, DatorMagazin has stood the test of time in terms of design and layout, they moved on with the times and updated it all the time. 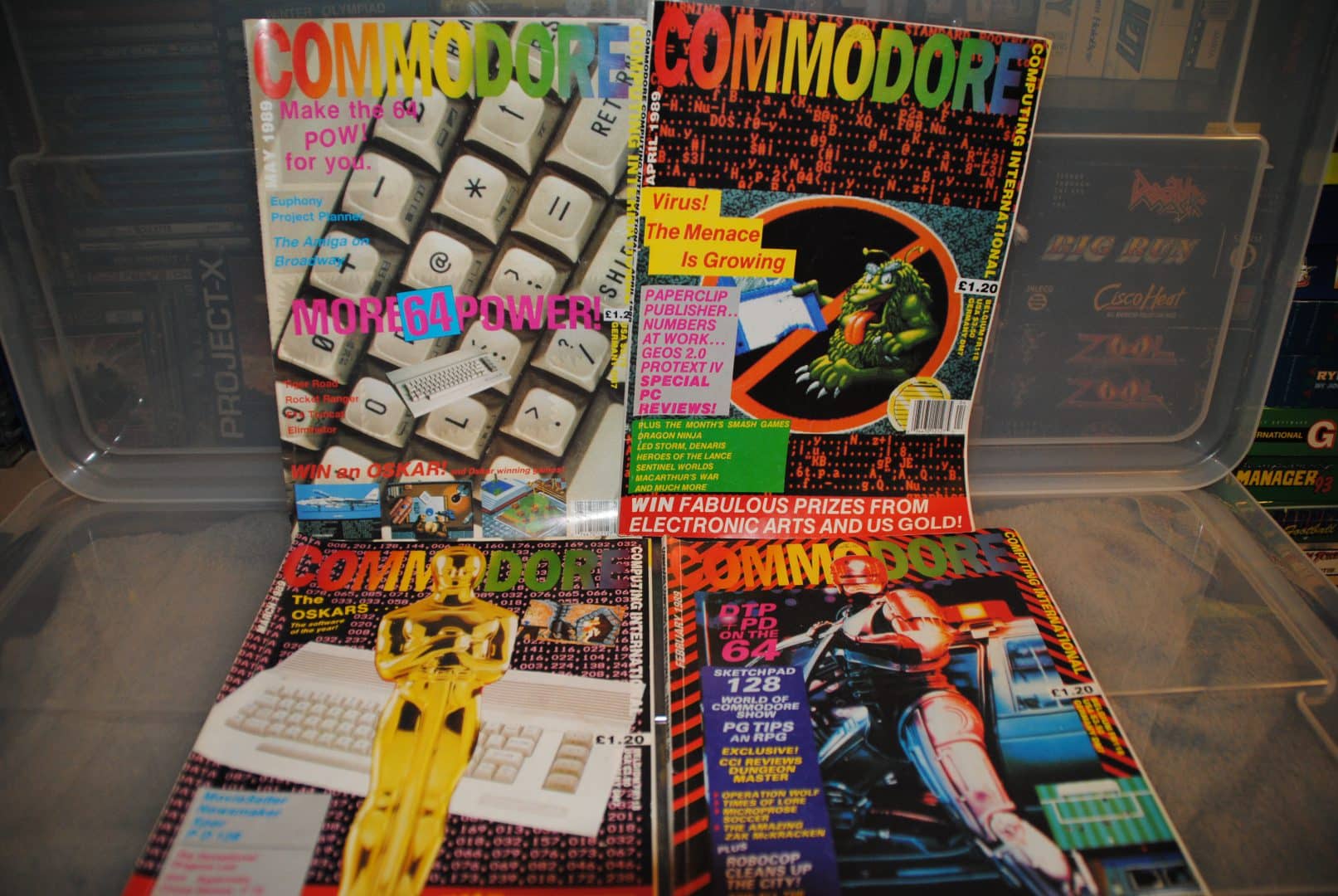 What’s this then?, Commodore Computing International, yup i thought first that it was Commodore User… I do remember this series of magazines but i must admit that i somehow mixed it up with Commodore user, i guess this is what happens when i stay away from the Commodore 64 scene for too long.

Gotta like how they snuck in some Amiga stuff at every chance they got, loved to read their Rocket Ranger review and for odd some reason this is not the first time you see a Cinemaware title in this article.

Soldier Of Light was another cool game in my opinion, i do agree that both the C64 and Amiga ports could have been better but i still enjoyed both of em…. mostly thanks to the music i guess? 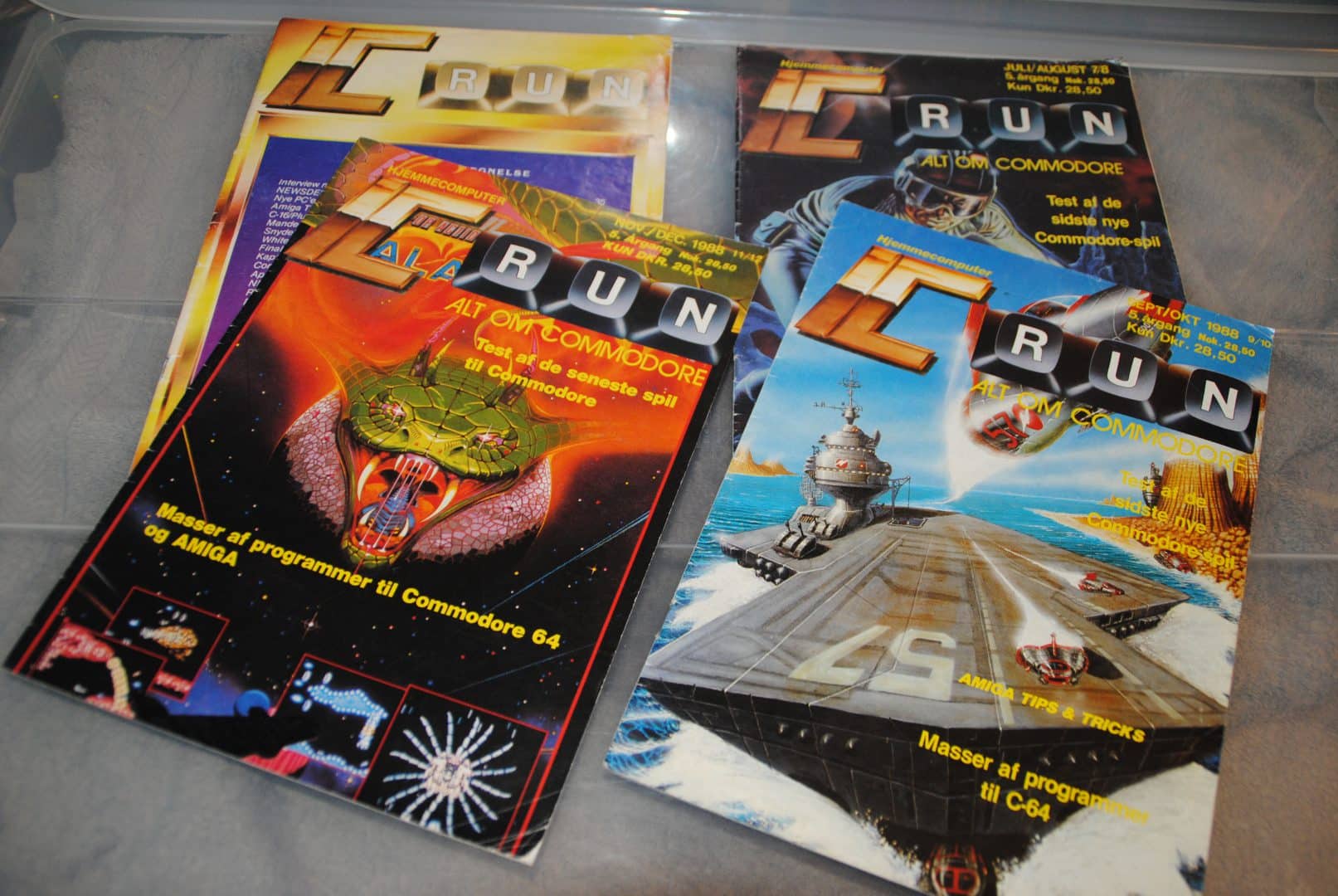 IC RUN, a Danish C64 and Amiga magazine, there were 4 issues in the lot that i got, 1 missing the front page and i feel that some pages are gone here too, i have not read up on the magazine details yet but it looks like it was the magazine originally called RUN which eventually turned into IC RUN. Oh and to make things even more interesting, it came in several languages too.

The magazine covered everything from the Demoscene to game reviews, lots of articles about programming and even better is that it got some really good demoscene effects tutorials in there too, not just boring text stuff…

King Of Chicago review, damn it was good to be a gamer back in the late 80s, oh and yes Buggy Boy C64 was much better than the Amiga version……

One thing though, not a single page in colour… i guess that came in later issues? 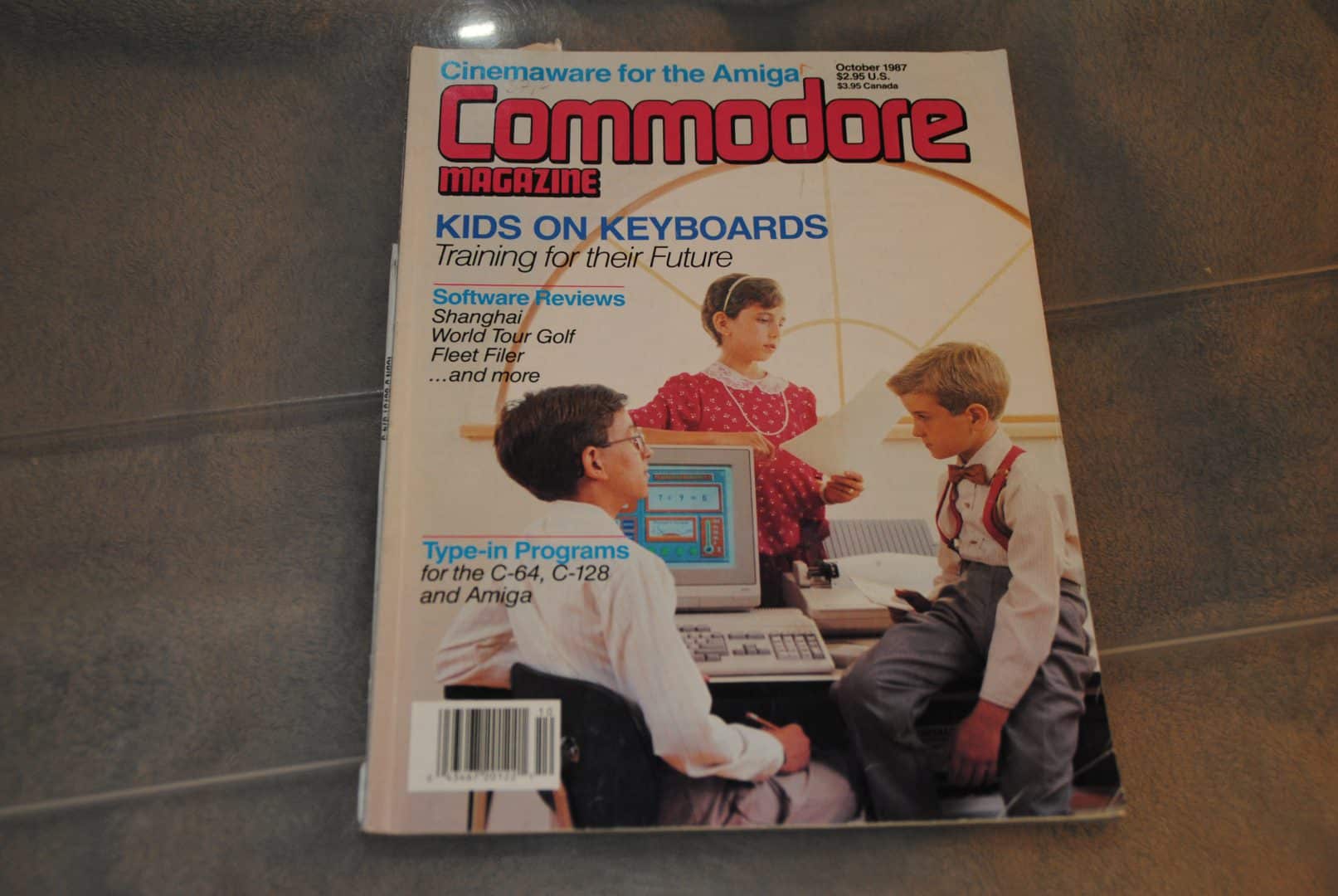 There was also 1 issue of something called Commodore Magazine in the lot. Never seen this one before, an English magazine with a more professional look, well at least on the cover.

Reading old magazines is like time travel for me and this magazine is no different, so many cool things in this mag here and i have to say it is the first of the lot that had me really impressed so far. 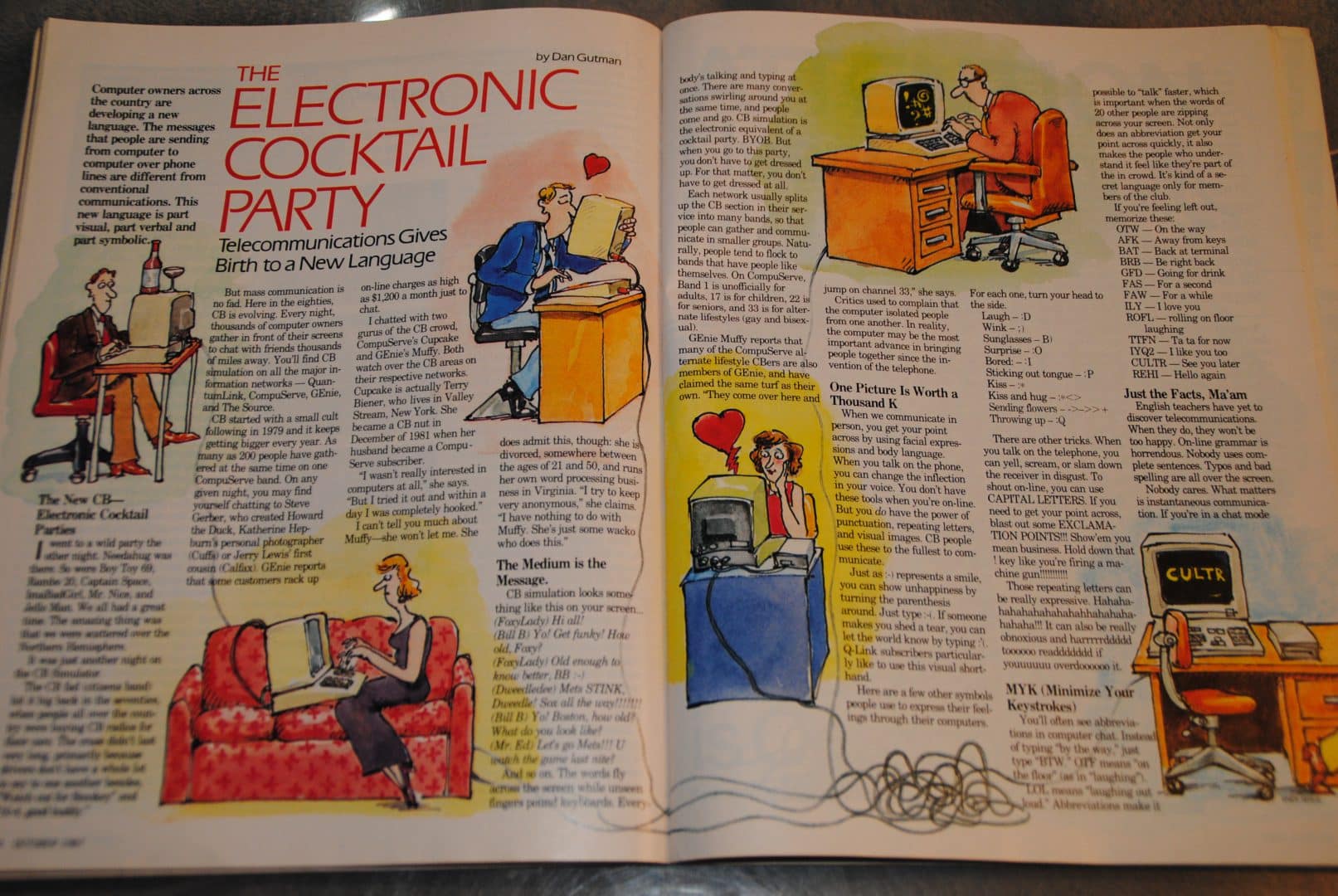 Hang on… yes you are correct, the date stamp of the magazine is indeed 1987! now look at this article again, what the hell?

This is huge, this is internet dating before it even happened….. 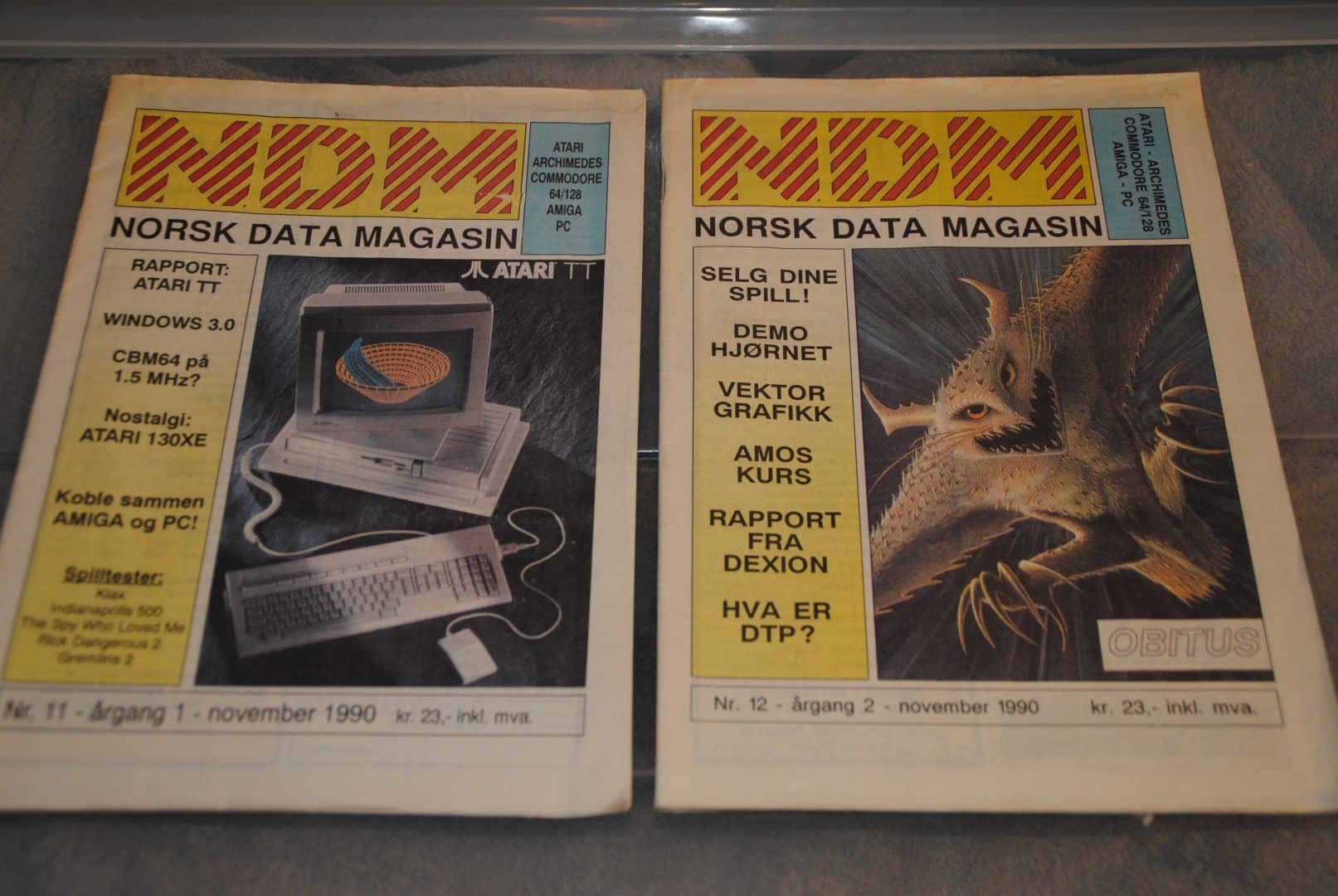 Another rarity in the lot was the (very) short-lived Norwegian NORSK DATA MAGASIN, 2 issues of it and both are dated November 1990 although year 1 and year 2… uh, yes i have no idea yet, will have to double check this once i get the time.

NDM was a pretty standard computer mag, reviews of the latest games and a few pages of “how to” and maybe the most important bit was the “swapping/ buy/sell” pages in the back of it. Looking at the names in these pages today brings many familiar faces from copy parties and such from the era. I need to get every single issue now, adding them to people on Facebook is fun… Hey hey! do you remember me from 1990? we used to swap games for years!. 😀 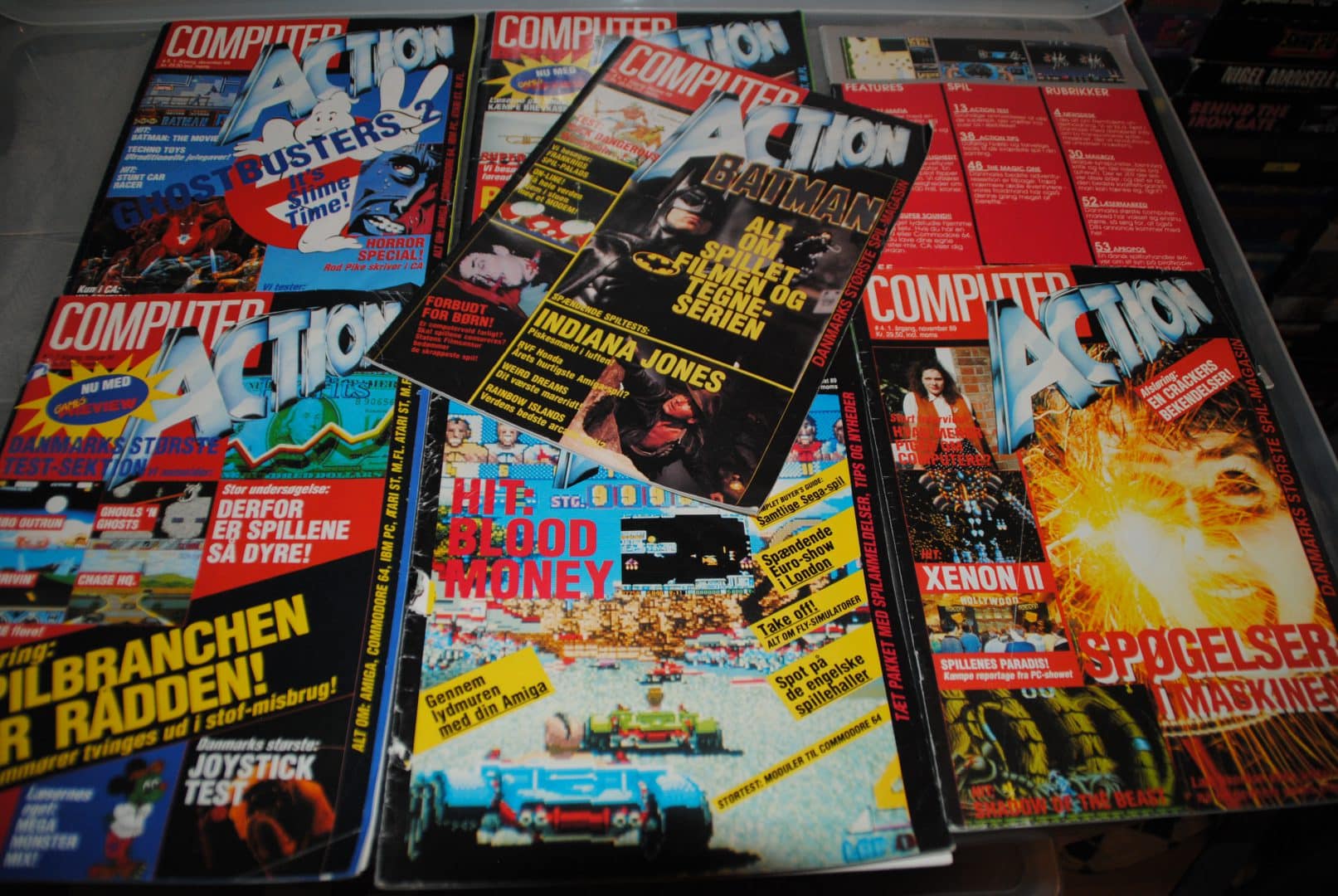 Computer Action, 7 issues of the magazine was in the lot that i got and i must admit that these also feels new to me, I can’t remember seeing them in the local newsagents back in the day.

Computer Action was a Danish C64/Amiga etc magazine, a very familiar look/design to it and lots of pages in colour too.

I guess these mags was only available via a postal order in Norway or something? , either that or yet another thing have escaped my brain over the last years. (yes i am getting old….).

Next up is the most known Danish mag in Norway… 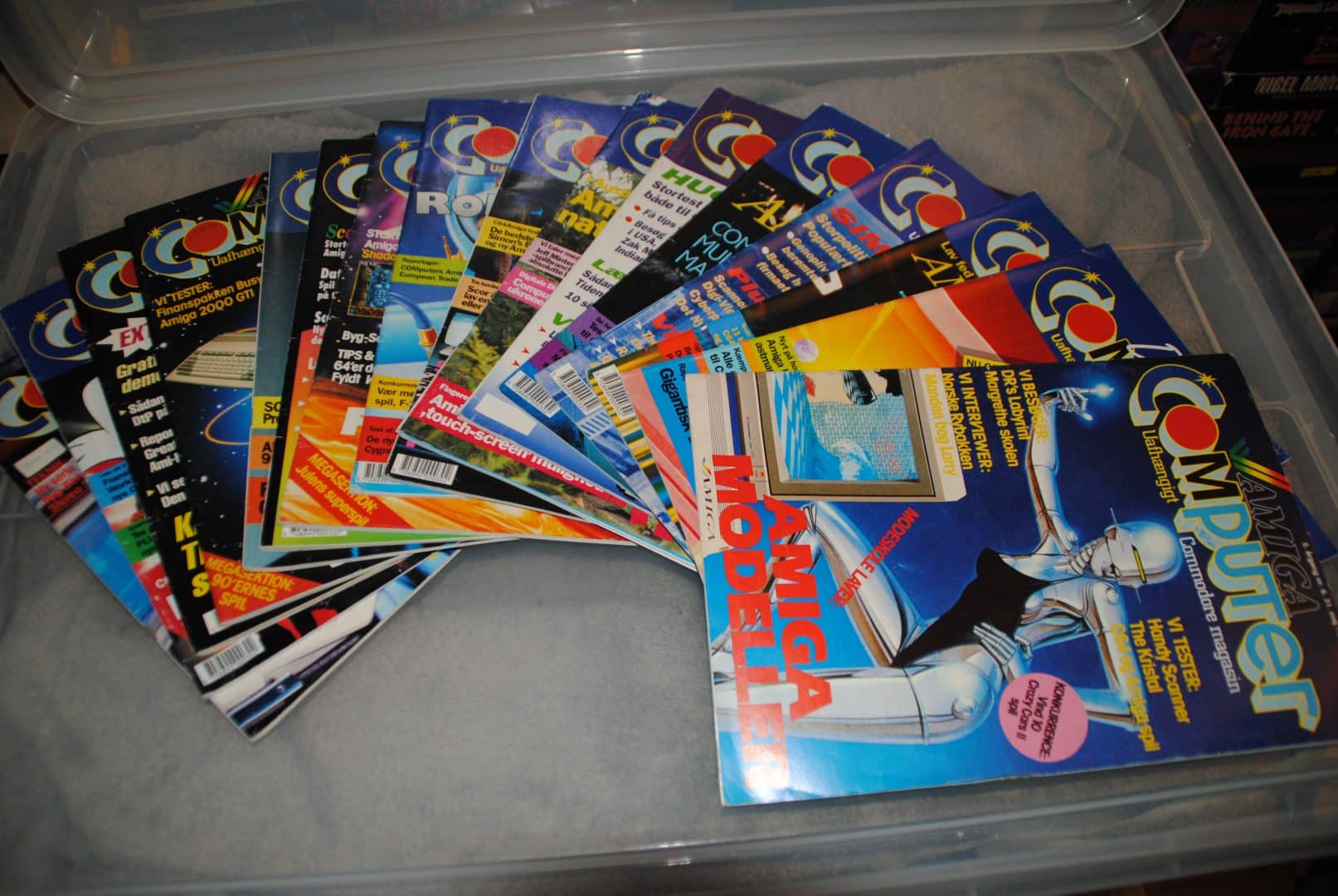 16 issues of the well known Danish Amiga Computer Commodore Magasin mag was also in the loot, the mag was renamed to “Det Nye Computer” a while later and it was one of my favourite Amiga mags for many years.

Hugo adverts, demoscene articles, peculiar review scores and so on happens to be almost like a trademark for the mag, i remember being really mad at them many times while reading their reviews but for some reason, i still went out and bought most if not every issue of it as soon as it came out…

I miss my collection a lot, even more so now when i got these… 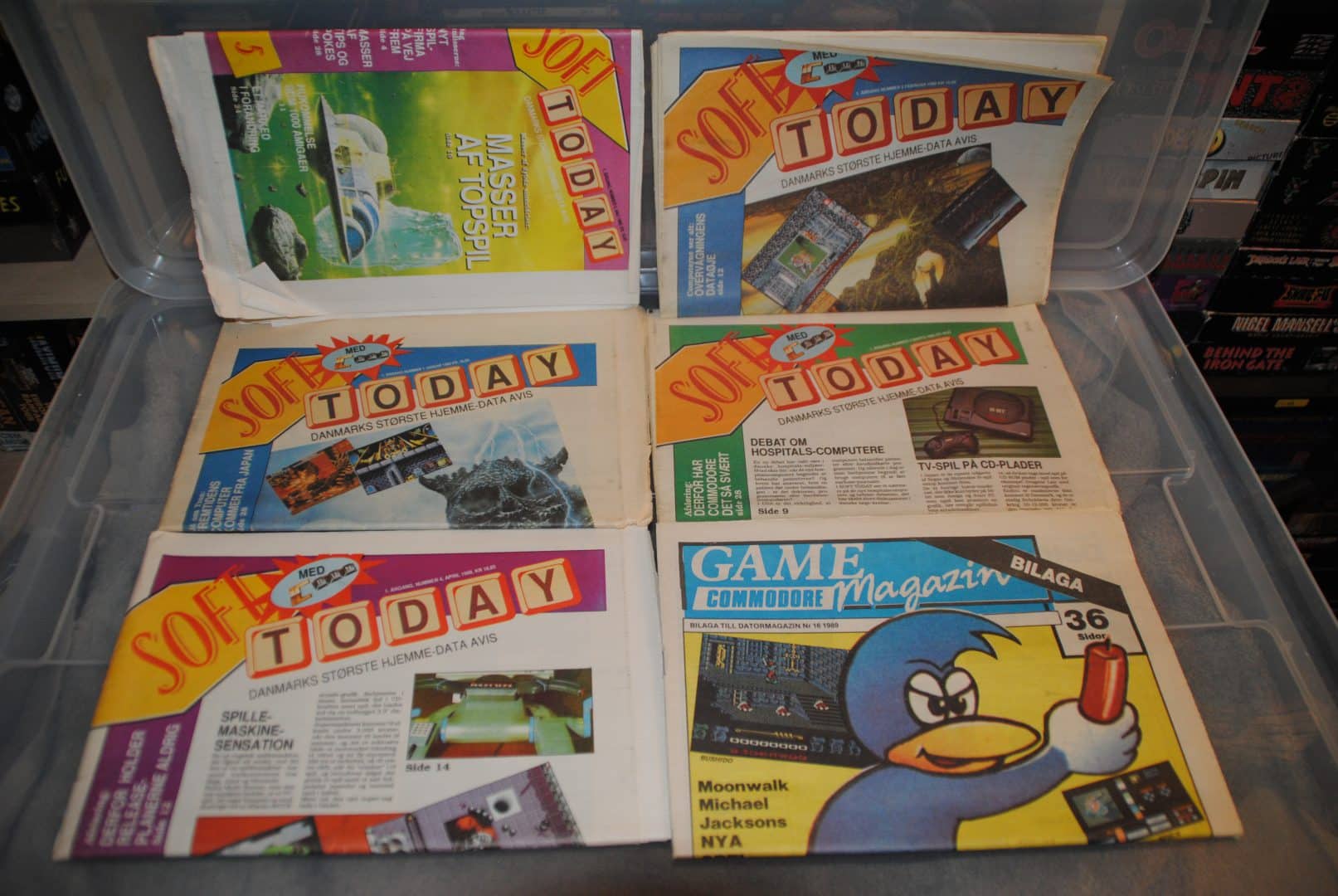 Here’s another oddity, SOFT TODAY which looks like it was some sort of an insert in a traditional newspaper or even a magazine like IC RUN.

5 Issues of SOFT TODAY was part of this lot, the 6th one is something called GAME COMMODORE MAGAZIN, totally clueless on what this is really, it looks very old..smell very old and look very outdated.

Yes, i might not like the design of it all but OH MY GOD did these 6 mags send me back in time, just about every game reviewed in here was in my c64 or Amiga collection back in the day.

Star Paws, Afterburner, Thunderblade, Powerdrift, Moonwalker, Super Wonderboy, Stunt Car Racer and so on… what an amazing time it was for the home computers back then…

Say what you want, for us retro lovers even crap can be gold and while this mag wasn’t all that it will still be loved and taken good care of in my collection. 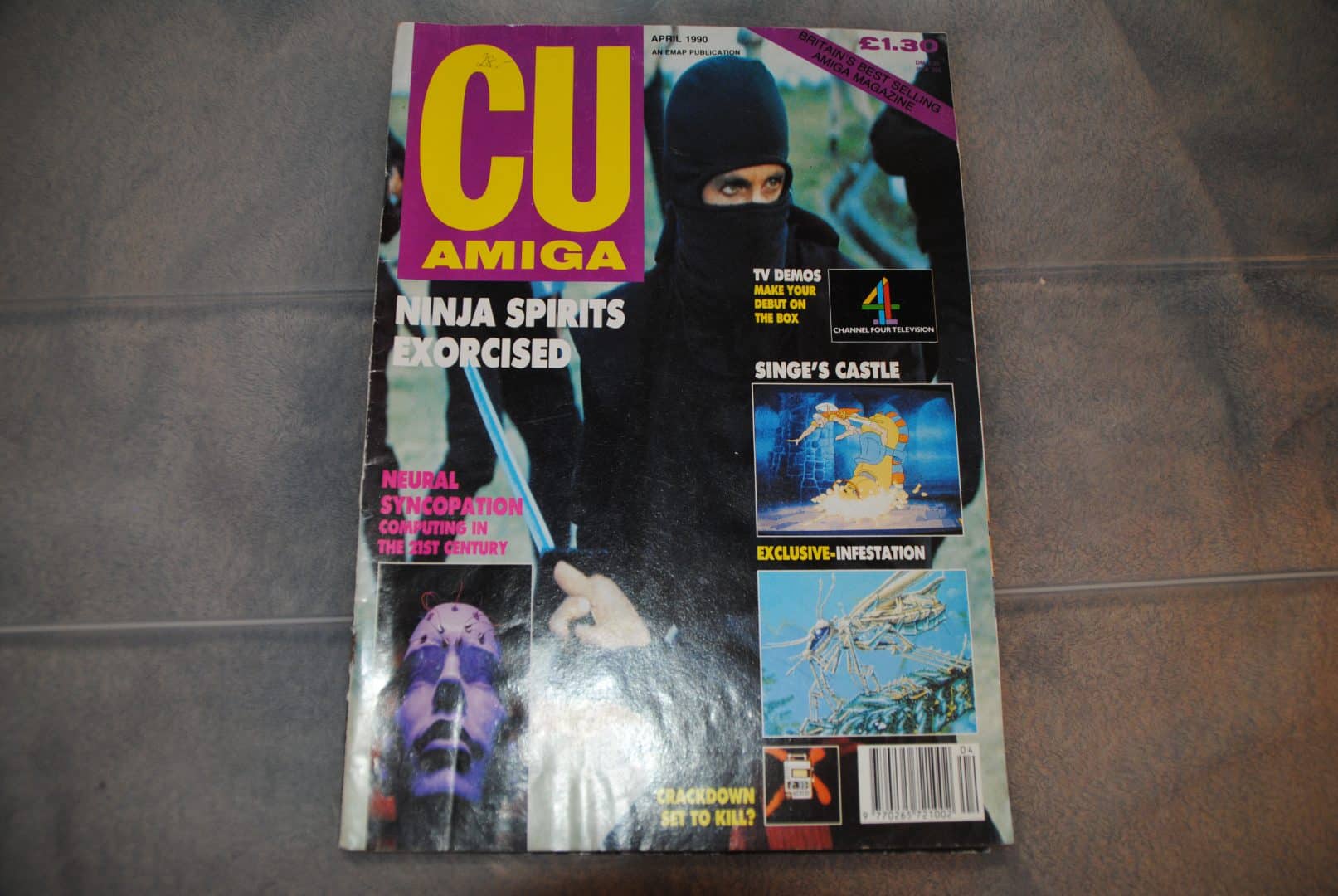 1 issue of the most known Amiga magazine around was also in the lot, CU AMIGA.

I got quite a lot of CU’s last time but this one wasn’t in the lot so my CU Amiga collection is getting nearly complete now for 1990-1992.

CU Amiga’s got a lovely design and while there are better ones from the same era i still have to say that it is such a pleasure to read them, good reviews and lots of exclusive pictures.. a lot of pictures actually.

The Arcades section was always a highlight in the magazine, if i saw them in the CU then i went to the local arcade and asked if they would get the machine anytime soon, share pictures with ’em and so on. Wonderful times!. 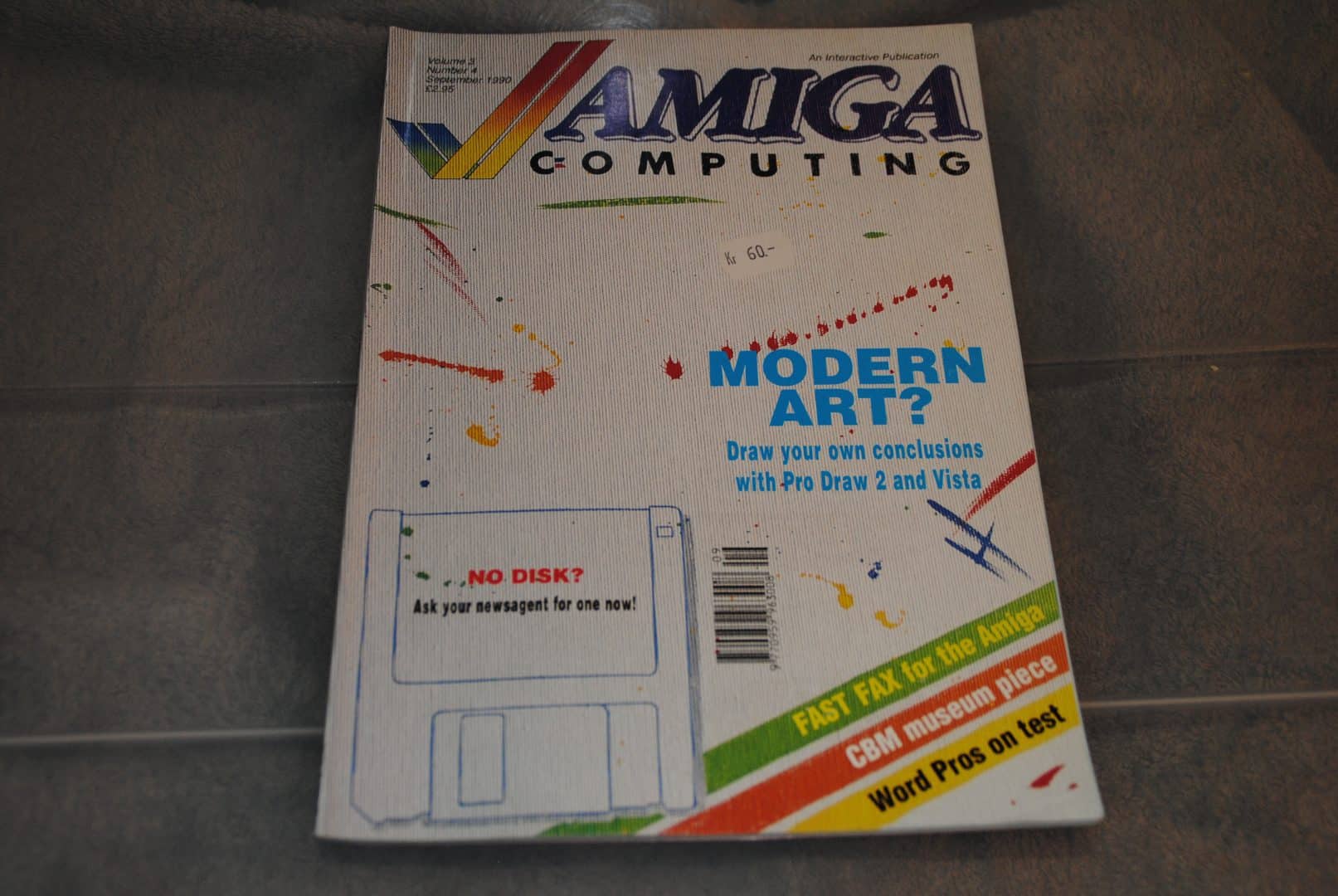 Amiga Computing, one of the more “serious” focused magazines for the Amiga.

Always loved this mag and maybe one of them i found to be the most consistent over the years, no idea why but it just felt “special” and a bit more grown-up compared to the others like CU, AF etc.

Amiga Computing always had some special article in them that you wouldn’t find anywhere else, and no it wasn’t just interviews or such as it was more about places where the Amiga was used for actual work stuff.

These things mattered to me for some reason, it was fun to read about museums, space stations, movie industry and so on that used Amiga’s.

I have to admit that i have learnt a lot from Amiga Computing over the years, i still pull references from it even today. 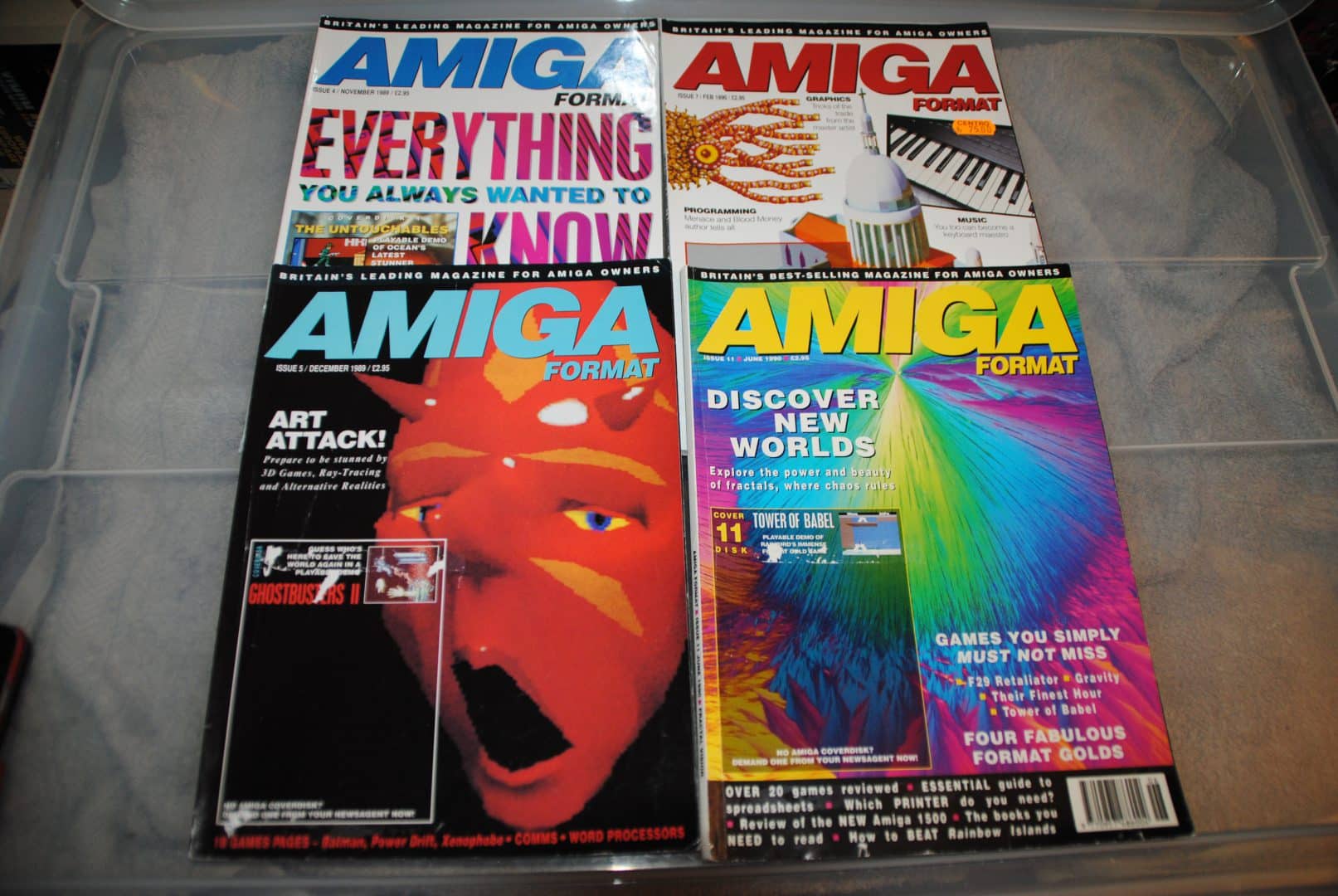 Amiga Format was probably the longest running Amiga magazine, i received 4 issues in the lot, lovely magazine and it is easy to see why AF was popular back in the day.

AF used to be standing side by side with CU in the newsagents but in many readers eyes it should have been in front of it, i always had to get both but then again i bought just about every magazine out each month back then.

Wonderful adverts in AF, lots of huge screenshots maybe best of all was all the previews of upcoming (and sometimes never coming) games. 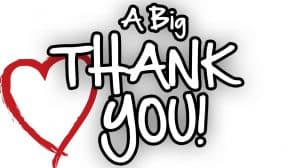 I would like to thank the guy who gave this lot to me, Jan Fredrik Leversund, thanks, man.

So what’s next for me?, well this article is actually a month old almost now and since then i have scanned every magazine in 600DPI and uploaded it all to the internet, they will eventually pop up on Amiga Magazine Rack but not exclusive as i came over a new project that i will support too (more information about this soon).

Reading old magazines may not be for everyone but for me, it is almost like a proper time machine, so if you got any magazines that you want to part with and want them to go to a safe home/resting place then let me know.