In my long-term “career” as a gamer, few games (or game sagas) ever gave me so many opposite feelings like the Silent Hill ones.

As an example, Tomb Raider really disappointed me with “Angel of Darkness” (which I couldn’t bare after the first 5 minutes), and Resident Evil has had a few drawbacks (IMO) with some of its installment, like the “Outbreak Files” of the PS2 era and the recent RE6 (Ok, even RE:ORC. But I love that game and you know it!).

Nonetheless, Tomb Raider reboot was an excellent game (Platinum!) and I know I will buy an RE7 regardless …!

Silent Hill is all a different story. I don’t know what it is with this “IP”. It might have something to do with its main plot been soaked with supernatural religious elements with which, coming from a strong Catholic background, I can’t really cope with OR, (original trilogy aside) some of the games were simply not good enough (or a combination of both elements).

Just to make myself clear, I’m not saying that I disagree with religious themes inside a game: I’m just saying that “SH” literally filled me with anguish, and it is just a strictly personal thing.

As I guess you all know, when in 1999 Konami came out with this survival horror, not many people would have bet on its success since at that time Resident Evil saga was at its undisputed top. Furthermore, the game featured a 3D explorable world which graphic appearance couldn’t compete with the beautiful (albeit static and pre-rendered) RE backgrounds. I remember that, after reading a few reviews, I decided not to wait for the European release and I bought the US version, which made things even worse due to the NTSC-to-PAL conversion. 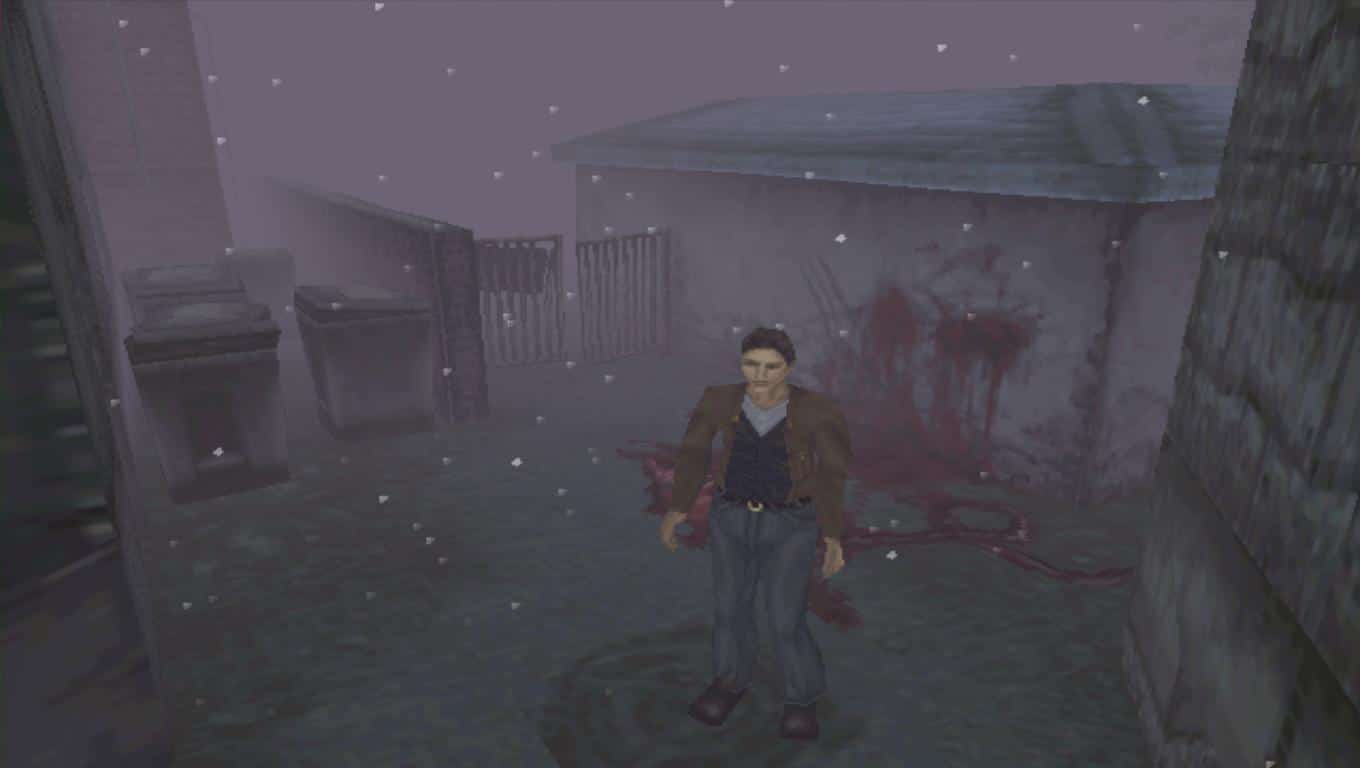 Despite that, Silent Hill redefined the whole concept of survival horror setting new standards for the entire industry to follow.
What made the first game a great one was not only the plot but the idea of putting ordinary people (not a hero this time, just a father desperately searching for his daughter) in an extraordinary situation (supernatural forces) but in a very ordinary environment.
This time there were no exclusive mansions or super high-tech laboratories: just ordinary houses, schools, hospitals and amusement parks. The result was brilliant. Every time in the game I entered a house (so similar to the one in which I used to live at when I was stationed in the US) or a grocery store (where I used to buy food) I felt like REALLY being there (I knew those places so well) and it struck me to death, since this time “my own” kitchen could hide some unnameable infernal creature. Not to mention the part in which I had to survive a boss-fight on the same “Horse Roundabout” which I used to go to when I was a kid. 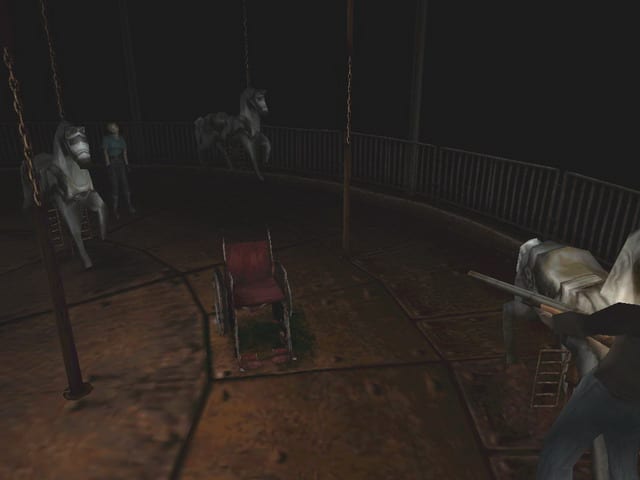 Unfortunately, although rather good, the following games couldn’t keep up with all those good ideas and the sequels started to look like just simply more of the same. By the time of “Silent Hill 4,” the saga was already dead, even if the initial concept of “The Room” was somewhat appealing.

Konami’s brilliant idea of using an entire cursed town as an enemy, instead of the usual zombies, aliens or similar stuff put the gamer always in danger on the razor’s blade, but developers started to choose different ways to scare that only succeeded in annoying me. It was not fun to ride through Silent Hill anymore, and creatures filled me with stress and anxiety which wasn’t fun to experience. Konami tried to revamp the series using third-party developers but, IMHO, it never worked.

So, my preferred survival horror (RE had already steered toward action-horror) became in time something to stay away off, something not to waste time with, until …..
…. well, until Tony sent me a copy of “Downpour” (thanks again, mate. I owe you)! 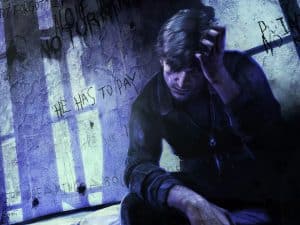 Honestly, I didn’t like the game that much at first, but I learned to appreciate it in time. I personally think that we are still a long way from the original, but we probably are now on the right path. In this chapter you are Murphy Pendelton, apparently convicted for a minor crime,

which finds an unexpected way out of prison when the bus he was on crashes during inmates transfer. Poor Murphy doesn’t know that prison would have been a much better fate since the bus crashed on the outskirts of Silent Hill! That’s why, from that moment on, bad luck is universally known as “Murphy’s Law“. (No, wait! That was another Murphy! Ha-ha). 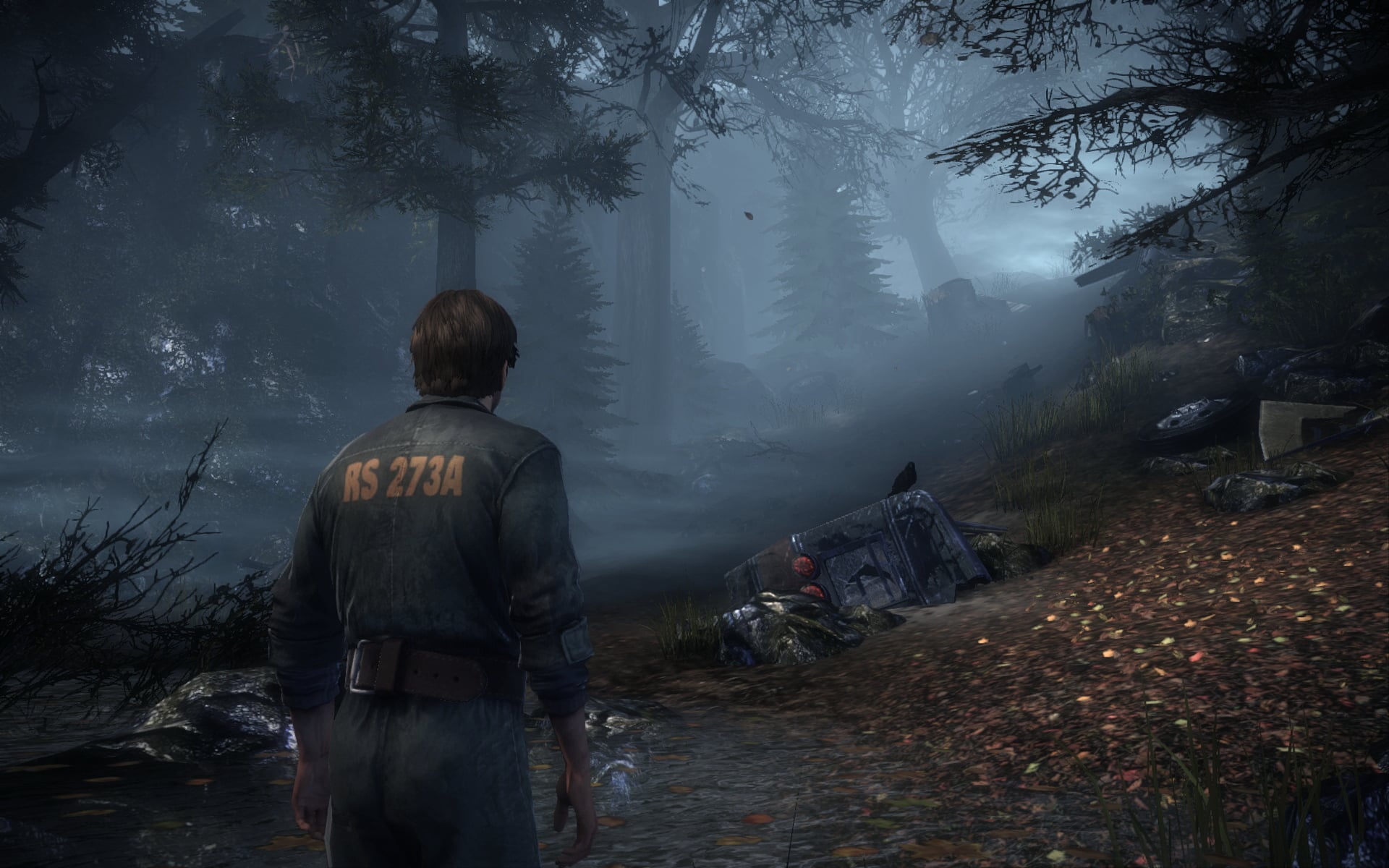 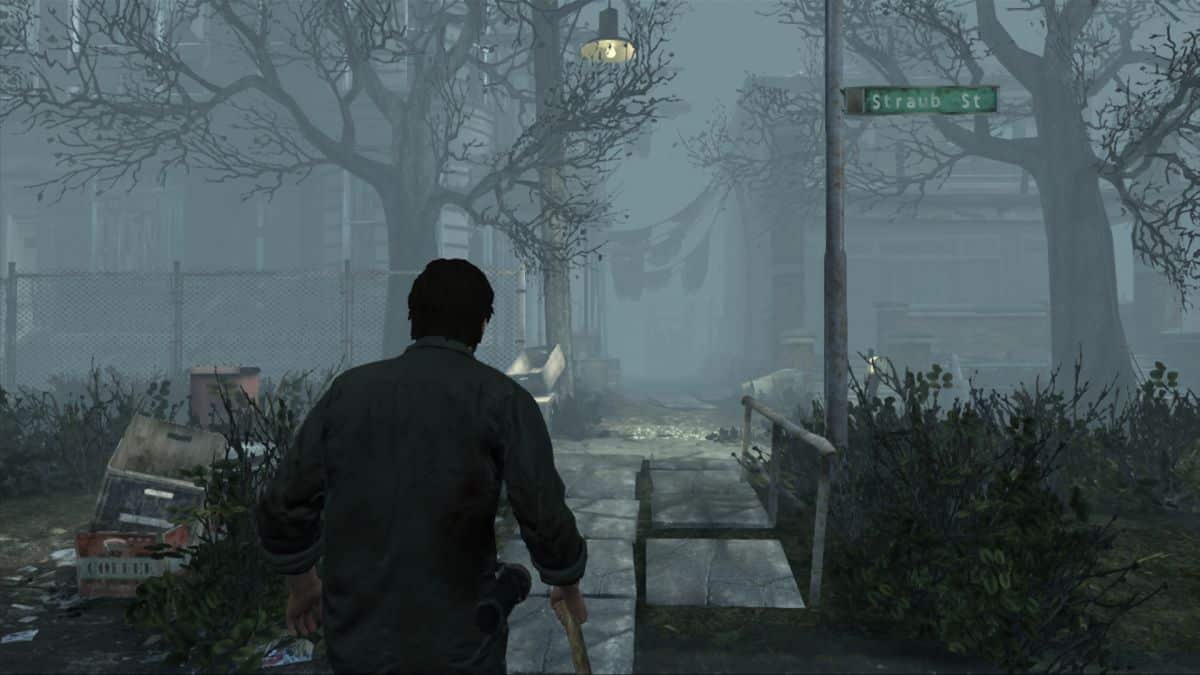 As usual, the town is mostly deserted and exploration phases can be long at first. Luckily, although not always very inspired, creatures are present in the right amount, giving you time to breathe every once in a while. 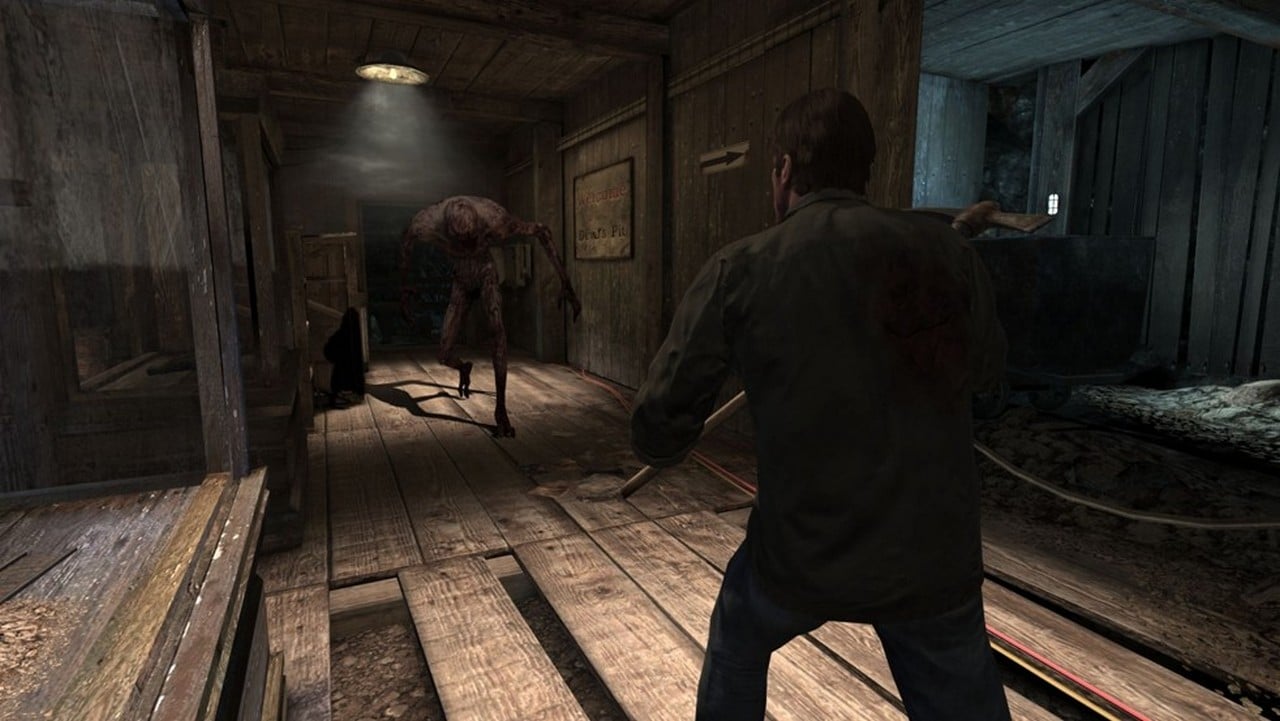 The game now introduces optional missions, that not only add replay value but can be rewarding in their own, facilitating your movements across town. One of those missions, upon completion, will give you the possibility to quickly move from one side to the other via underground tunnels. Like the more recent titles, you start your journey without a “clear” objective to achieve. Murphy is just trying to put as much ground as possible between the police and himself. In other words, the constant idea of having to find the missing daughter (SH1) or unveil the mystery about your wife’s letters (SH2), is not there at all. Hence, for a good third of the game, you will feel completely lost, hopeless and with no way out. 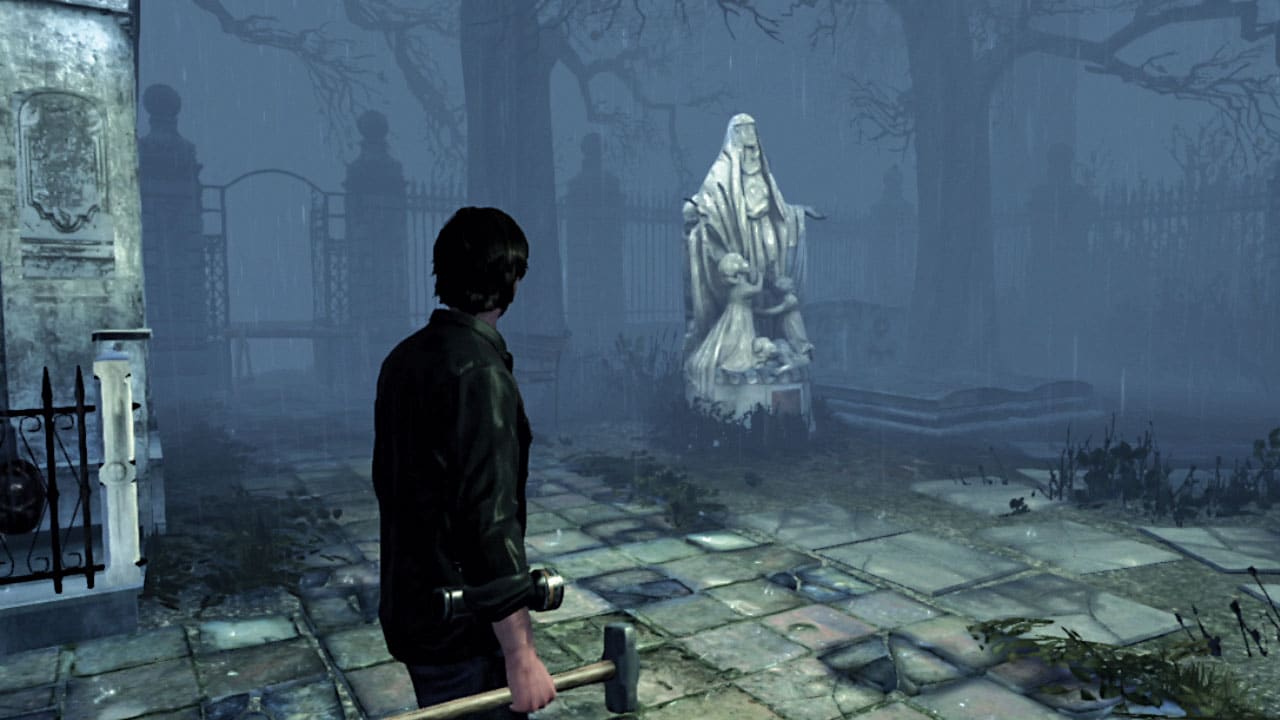 From my standpoint, this situation – common to all the preceding titles starting from SH4 – is very frustrating and represents a major turn down, but when you finally get to talk to the “D.J.” who is constantly following your progress over the local radio, things start to change. At that point, you have finally someone to back you up, someone who will at least try to provide you with a way out, who will not overlook all of your questions for whatever reason. 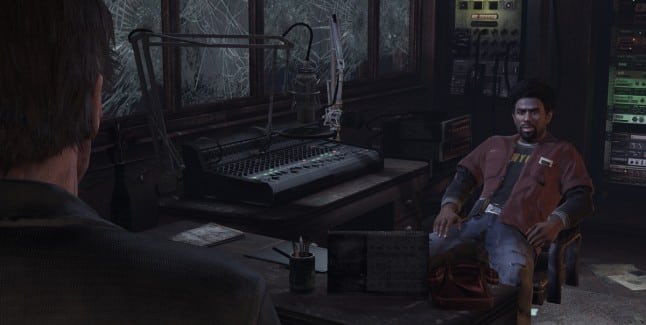 I always hated the way in which game designers thought they could enhance suspense just leaving every question in mid-air (or, worse, totally unanswered). This thing happens sometimes even in “Downpour”, but they are less unnerving than before. For over half of the game, there isn’t a real big boss to fight, so you are actually playing at a different pace compared to the usual one. Nonetheless, considering how the plot unveils, in the end, this choice felt to me like the right one.

What I really can’t stand here is the controls map. I didn’t like it at first when I wrote my RANT2.0 and I totally hate it now after having almost completed the game (72%). Is there a reason why you have to drop (and lose!) your gun if you want to pick up a knife (or a hammer, for what it matters)? I know that in a real survival horror your inventory cannot be unlimited, but this is ridiculous! And why the heck should you map a flashlight on the L3 button? I ended up fighting in complete darkness countless times since I was trying to escape at the same time and the left analog stick was under “heavy duty” conditions! In addition, the game tends to literally freeze from time to time, even while saving progress. Also, every once in a while you will perceive white “flashes” (a thunderstorm, or simply the sun rays trying to pierce the thick fog?). Trouble is that this happens even inside closed and windowless rooms! Finally, some locations are maybe too dark to watch and, considering that Downpour comes with 3D Stereoscopic graphics, … how solid can darkness be?

Despite all these evident flaws, I liked returning to Silent Hill this time, since I found a good balance between fun and fear, between exploration and anxiety, between punishment and reward. It’s indeed a pity that the anguish is still there, even if in lesser quantity because I had the feeling that this game was finally different (and better) than many preceding titles (“SH: Homecoming“, just to name one).

So keep on working, Konami. For the first time in years, I’m now waiting for a new chapter.

Have a nice day.

PS: I’ll keep updating this post until I finish the main storyline at 100%.

Crossover time:
Movies: Silent Hill and Silent Hill: Revelation (Director Christophe Gans stated very clearly that he was a HUGE fan of the original game, and he got the rights to shoot the movie thanks to a video interview to Konami). Wiki ;
Music: “Anguish and Fear” is also a Yngwie J. Malmsteen song from 1985 album “Marching Out”. I fought that Scandinavian readers among you guys would have appreciated that. 🙂

Edit Friday, September, 6: I reached a 92% completion rate, yesterday night. I’ll try to post a few pictures of the last (dark) level starting from next week.

Edit Monday, September, 10: Game is now 100% complete, as you can see below. I didn’t complete any optional mission (even though I started most of them) since I rushed through the game as quick as I could (so many games, so little time). 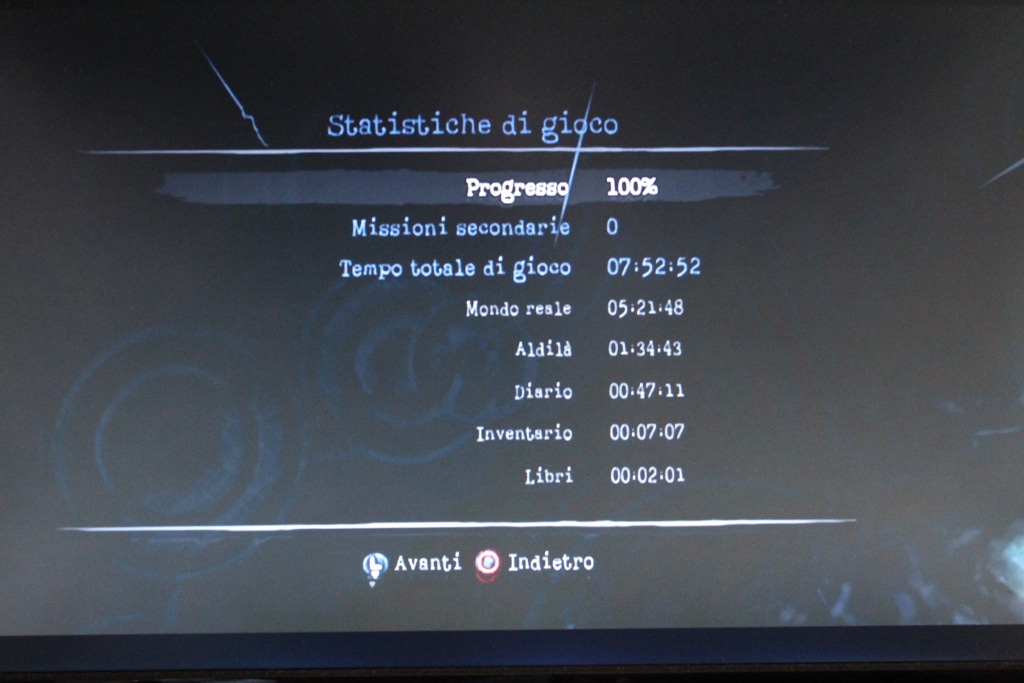 I can confirm what I wrote in the article (and Tony underlined in his comments): we finally have something to look forward to. The game, although flawed in many ways, has a good story and could finally be a new beginning.


Follow Us... Inspire Us To Get Better... Keep The Flame Alive
Tags: resident evil, Silent Hill