While this game International Ninja Rabbits never was a huge hit or a gem or what so ever the game somehow managed to do something to me, it was not on the Amiga actually as it was on the C64 where my memories are attached to it. and don’t ask me how or what as by the time this game came out (1991), well let’s just say that my game machine was 100% Amiga only. (i still had the c64 of course).

(The C64 games must be older than 1991… maybe the versions i played or at least the first one was a leaked alpha or whatever or maybe it was one of the games that i played when friends were over for copying disks and the Amiga was occupied with X-Copy (Click-Click-Click-BRRRRRT-Click-Click..) so we had to use the C64 for our gaming needs).

International Ninja Rabbits is actually a sequel to a game called something as amazing as NINJA RABBITS! and to this date, i still have issues to tell them apart as that’s how similar they are to each other… 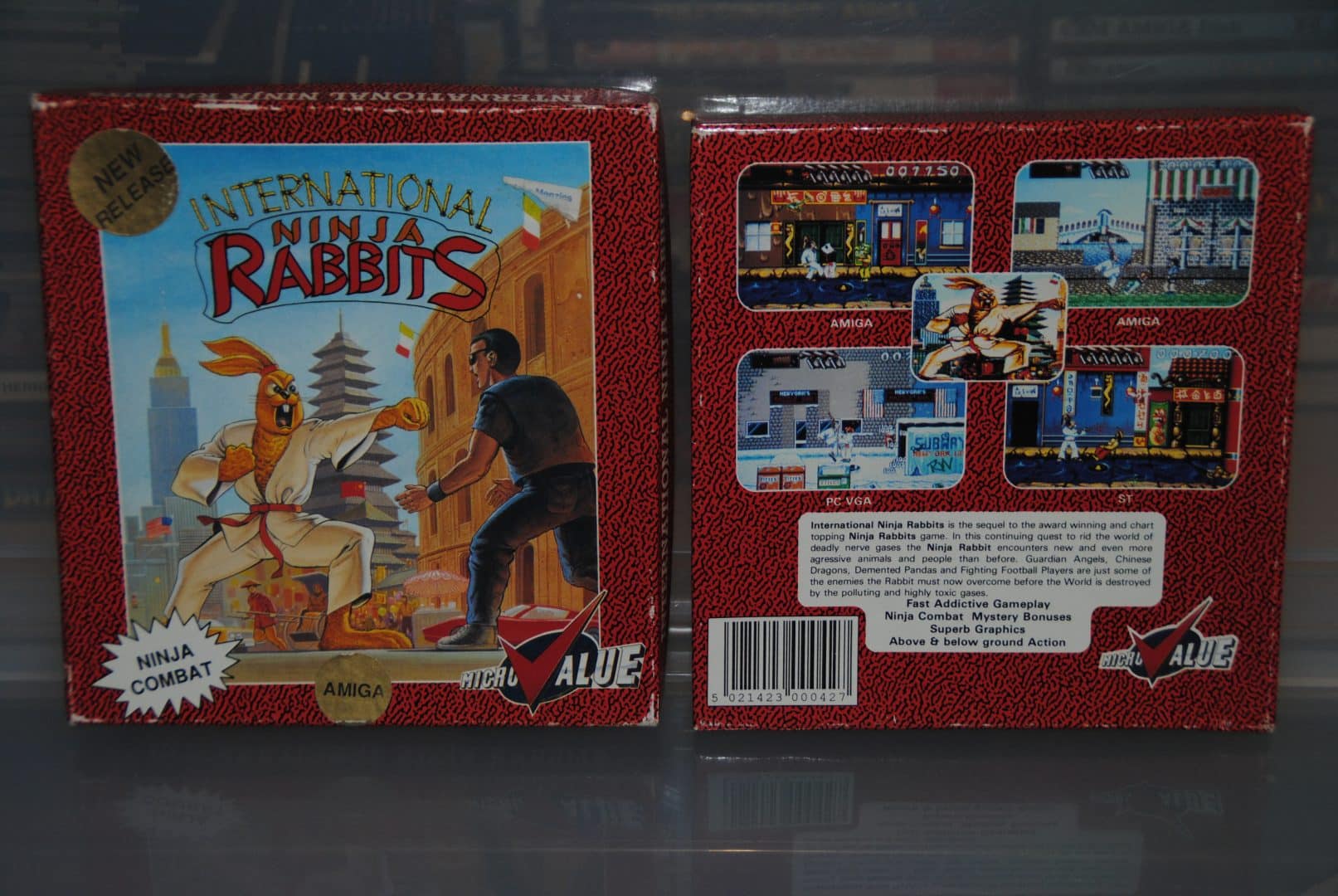 I remember i bought this game while i was away at school as i lived like 3 hours away (by car) from home ,i only went home at the weekends if money allowed it and i had no room/place to put a TV and my Amiga in the “room” of 3×3 square meters, and i having played the somehow shitty but fun game on the C64 i couldn’t wait to get home and play this Amiga version with its uber-cool graphics..

Every Amazing Amiga port of an C64 game had to have advanced manuals like this one…oh wait.. it’s the C64 manual. 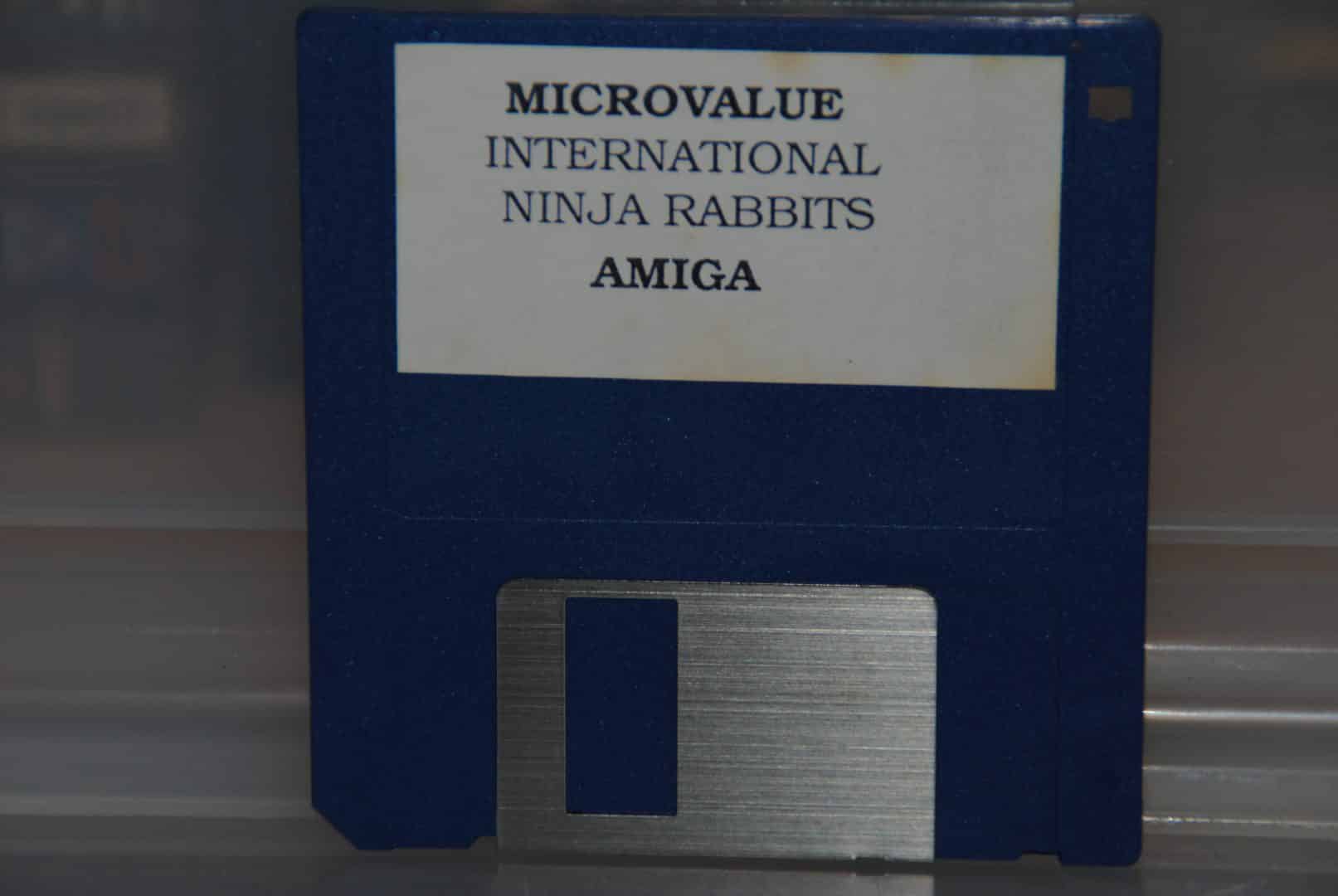 Microvalue was a budget line and that is how and why i have so many of their early games as i had little money and buying these games for £4.99 english pounds was pretty good even though lots of their games stunk…

Main menu screen and a cool one, same as on the C64 (which also had a cool menu) and so far so good right?, well not really as everything that was broken on the C64 is broken in the Amiga version too but it’s actually much worse.

Pictures may look ok enough but when you start moving or rather try to move. well, then you realize that you have entered the world of a sprite animation of maximum 3 frames.. or even 2…

and the speed of it must be one of the most unresponsive games i have played in my now 30-year-old gaming career.

The game is not of the scrolling sort, it’s screen by screen and that can be ok enough if it’s done right but in this game the graphics look ok, it’s a city but that’s it…for all i know this game could have been based upon an oil rig as the story and concept just doesn’t match… The first one was green and out in the forests and well i don’t want to spoil it just yet but somehow tricked me into buying this.

So why bother writing this article? , well as i said…there’s something about it and while i realize that time is pulling a prank on me i figured out where it all went wrong… I was expecting this Amiga version(s) to be more like a certain Bunny Ninja game on the C64… do you know which one?

Samurai Warrior – Usagi Yojimbo , one of the best games on the C64 and a game i played for months upon months back when it was new and i bought the International Ninja Rabbits game on the Amiga in hope that it would be as good or based upon it due to the power of the Amiga and not like the C64 versions of them..

Just as a bottom line comment, i have no idea what so ever if Usagi or Ninja Rabbits are connected to each other but i guess the guys behind this game took inspiration of Usagi and didn’t have the skill to pull it through.

WHY OH WHY DIDN’T ANYONE DO A PROPER OR PORT OF SAMURAI WARRIOR -USAGI YOJIMBO GAME ON THE AMIGA!!!!

Screenshots for the Amiga version is taken from HALL OF LIGHT.

Box shots are from my own collection.