And so I finally fell for this game as well …

Attack on Titans is one of those cross-media products that I originally missed and when I somewhat made contact with it, the extreme hype that anyone seemed to have drawn me even further away.
My domain revolves most of the times around niche products, even because when the hype is too high it often ends up in nothing good.

This time though, there were too many good signs behind the fuss, so I dug into it and I found an interesting manga, a very well done anime (together with full-length movies, both animated and live action ones) and a fast and action-packed game. 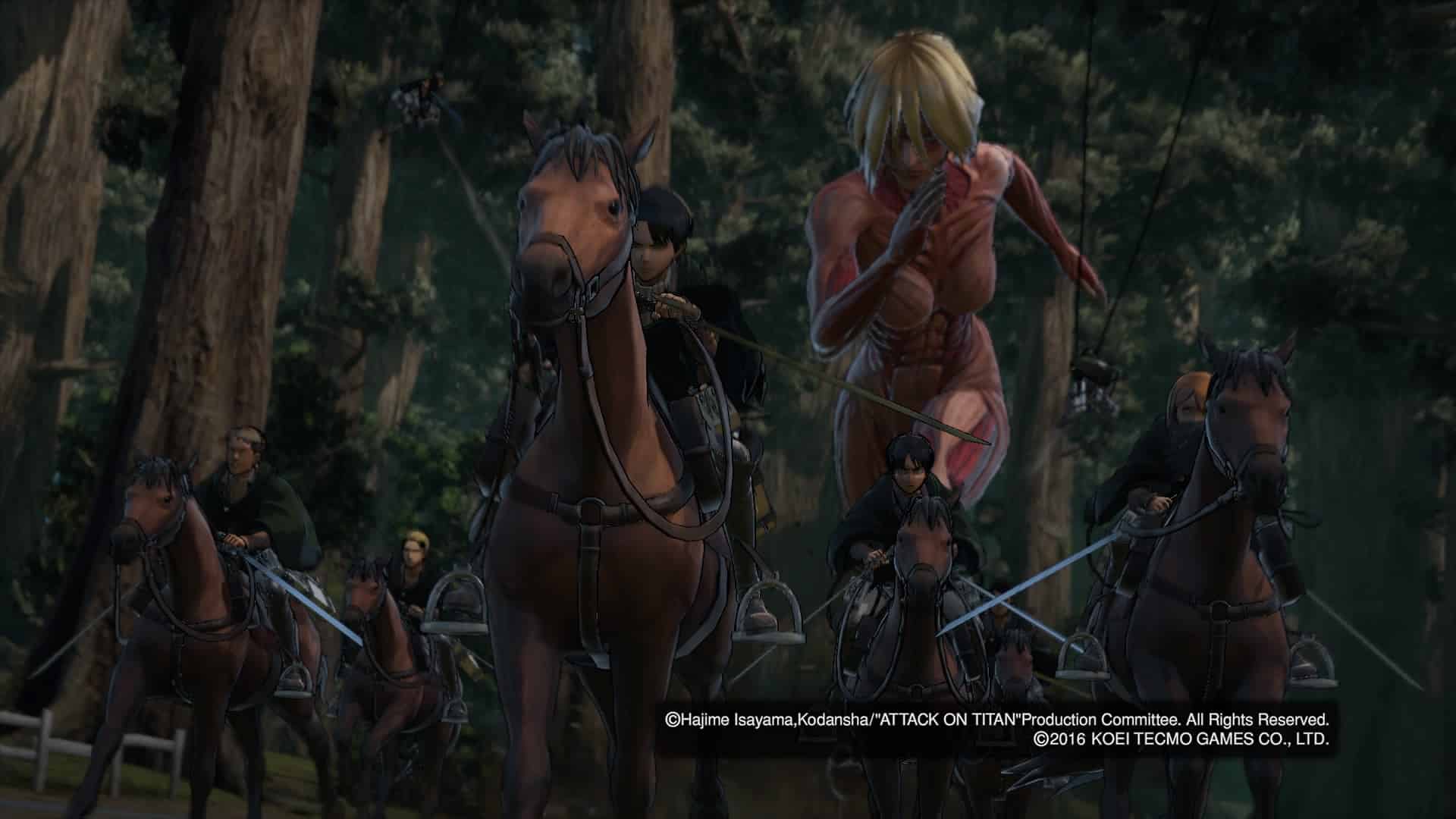 If you don’t know anything about the plot around the original manga (2009) let me tell you that in an alternate, pre-industrial world, mankind is at stake when man-eating Titans appear and start slaughtering people. Totally helpless and with no known weapons to face such an enemy, humanity retreats into walled cities, actually starting to live in a captive state.

The story starts 100 years after the first invasion, 100 years during which most of Earth inhabitants lived in a state of quiet while a few selected regiments protected them from the Titans. 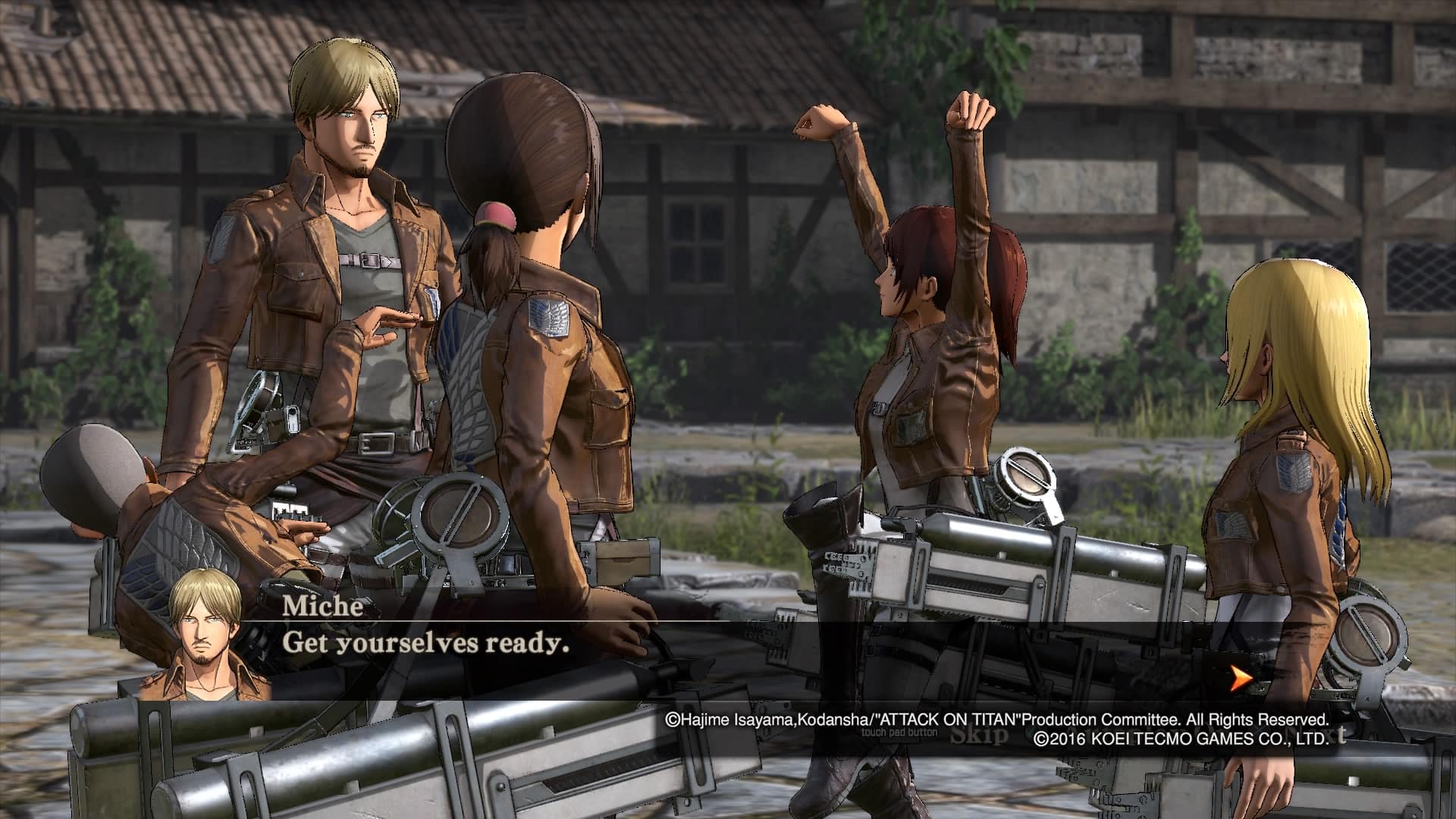 Attack on Titans closely follows the story-line depicted in the first season of the anime and explores the nature and acts of most of its main characters. While impersonating various key roles, the player has the opportunity of reliving its most shocking, courageous and exhilarating moments.

At a certain point in time, after those first 100 years of “peace”, an enormous Titan appears before the main walls and finally manages to breach them. The following invasion by lesser Titans results in a catastrophic event that leads to the death of one of the key characters’ mother. Eren Jaeger (this is his names) watches his mother being eaten alive, and the resulting shock becomes the driver to enrol in the Cadet Regiment in the attempt to become a soldier and seek revenge. 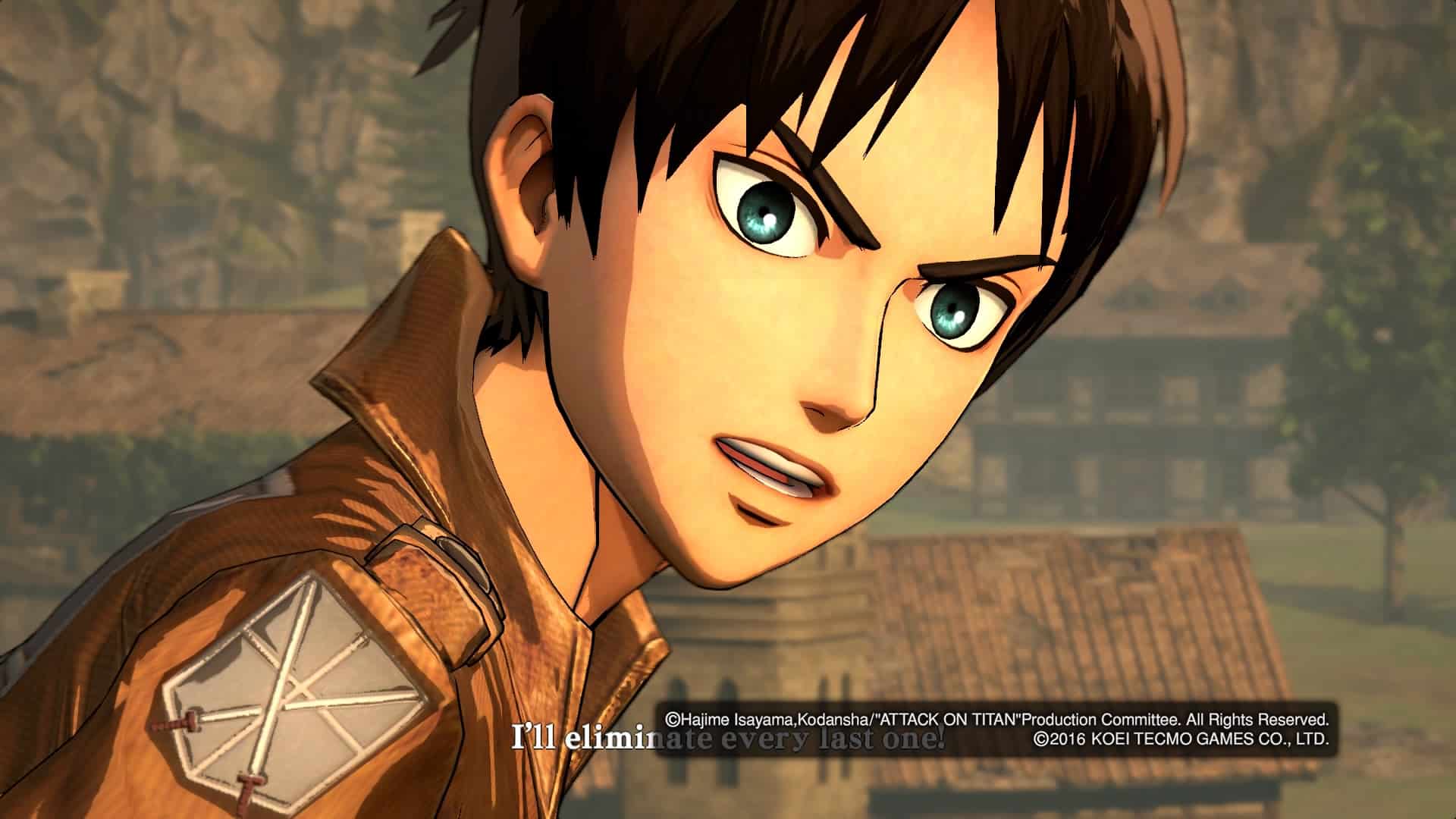 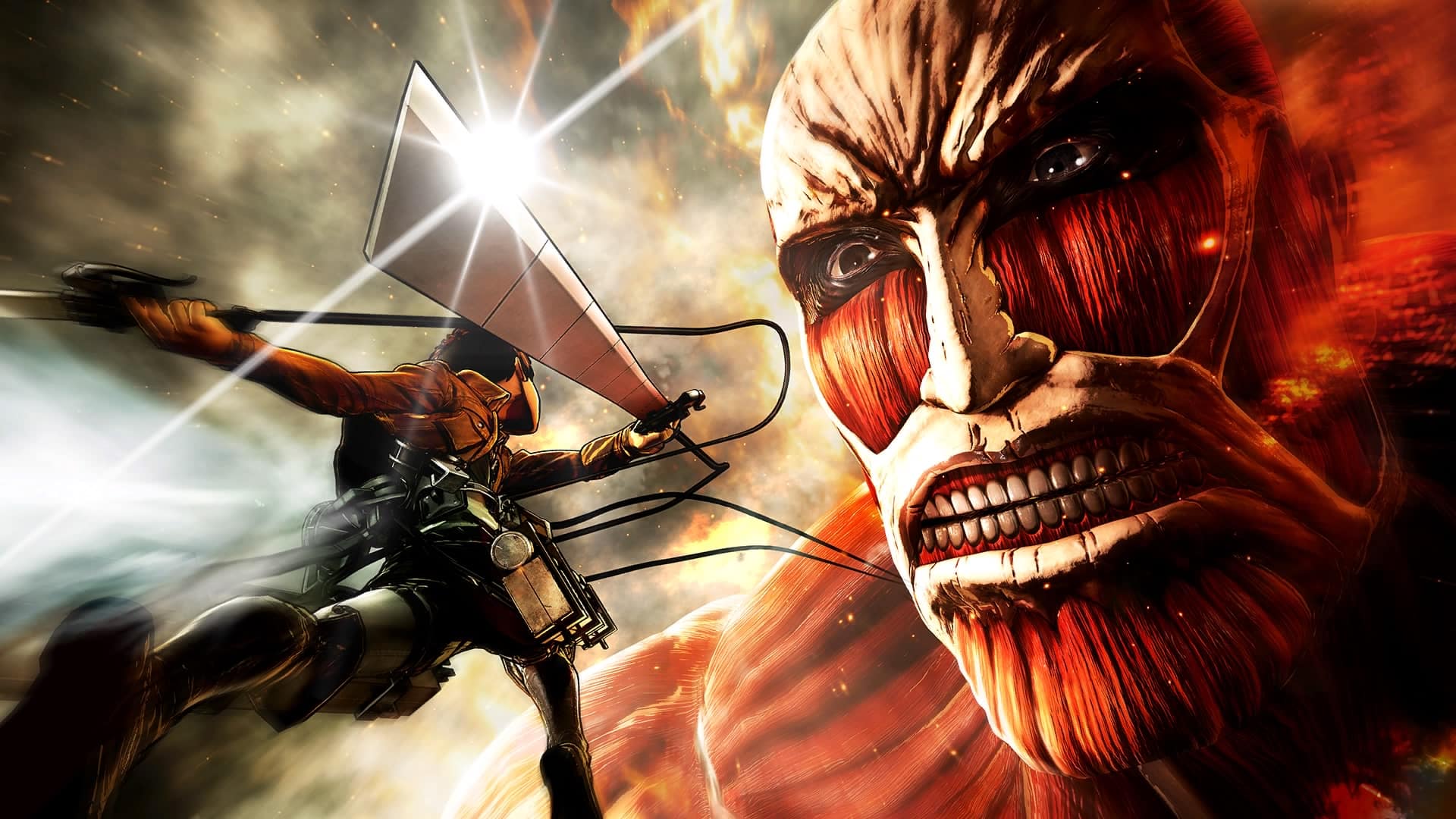 Nonetheless, this overpowering foe is just too much for most humans, and many of them strive to become a high-rank soldier just to have the chance to join the Military Police Brigade (who guards the Royal Family) and end up living in the innermost (and heavily protected) part of town.

The environment set-up is consistent with a middle European steampunk alternative world, where soldiers use compressed gas-powered devices (called ODM: Omni Directional Mobility gears) to move in the three-dimensional space in order to get to the nape of the Titans. 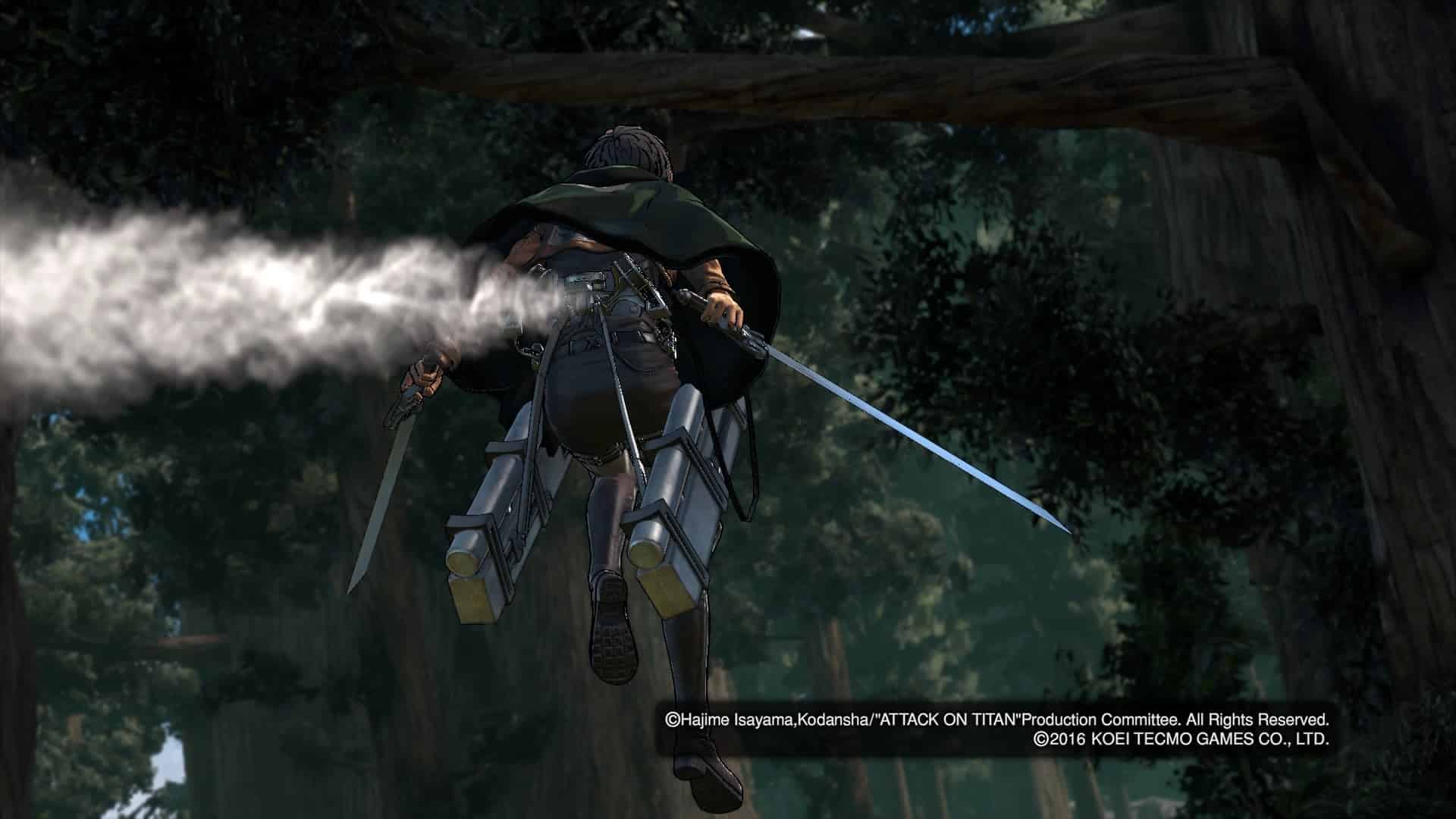 This is, in fact, the only part of their body that, if struck, kill them in an instant. Of course this is easier said then done, since Titans can grab you and crush you before you even realize it. After that… well, death better come quick.

The game features two distinctive modes: Attack (basically, the story mode) and Expedition (side quest exploitation). After completing the main game, roughly 3 chapters containing 25 episodes in total, you will able to access a post-game chapter that will enable a full replay of the single episodes and will let you play the Expedition missions from within the Attack Mode.

Also, whilst during the story campaign you will be forced to play only with selected characters, the post-game campaign can be completed with a character of choice, each one with slightly different abilities and combat skills.

The Expedition Mode can also be played with online friends and cross-saves are enabled through the PS3 and PS Vita versions of the game, so you can virtually play from your living room to the toilet one … Since I bought a physical copy of the software via Play Asia I don’t actually know if a cross-buy version was available as well or if you have to buy different copies of the software.

All considered, the game is a good one and even though the graphics department is sometimes quite dull, it’s still much better of most of its competitor of the same range.

The landscapes are consistent with a middle European country, with some very distinctive landmarks that made me feel at home. The following pictures, with a few minor deviations, show nothing less than the Leaning Tower of Pisa…

I had real fun while playing this game and, although I know I won’t go for a platinum, I will keep playing it for a while. I decided to award it with an 8, just to balance all its different aspect. If you are a fan of the anime though, make it a 9 and remember that AOT2 is scheduled for sometime in 2018!

4 thoughts on “Kill them all! – Attack On Titans”