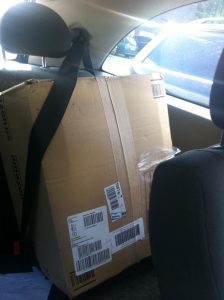 Ok so this is the second article about Defiance (see this post/article) in a very short period, this time it’s about me deciding to spend more money on getting the same game again in a more “collectible” way as I knew a shop that sold a version which included a season pass for less of the price of the season pass itself so I decided to dive in and buy Defiance : The Ultimate Edition, the price was less than 20 GBP (British Pounds).

I placed the order a while ago and wondered if it had been lost in the Post or if the Toll/Customs decided to open it and start investigating (as soon as they do it will take weeks for them to actually send it to me due to paperwork and so on).

I went to the local shop yesterday which is also the local post office and the clerk told me that there was a package for me here and that it’s been there for 10 days now and if I had forgotten about it… (what?.. I never got a message about it…)… 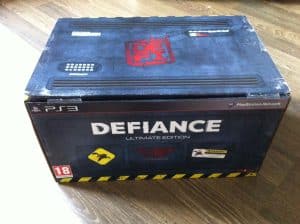 While filling out the forms and so on the guy started looking for my package and I was jokingly saying “it’s the huge one on top of that shelf”.. ah yes he said, finally we can get rid of that… yup, it was mine… I went.. WHAT? it’s fucking huge man!.

I take games and game boxes very seriously as you can see in the picture above.

What the hell (sigh) is in this package.. I thought it was just a Steelbook edition or something.. but nope.. it turned out to be…

THE ULTIMATE EDITION, umm well I know I ordered that lol but seriously this box is bigger than my Killzone 3 Helghast edition (which btw is huge…), shocked as I was I continued unpackaging this monstrosity.

What!, it turns out there is even a special edition and that this edition includes that material too, I bet the Special edition is more expensive too… don’t ask why but that is something I have noticed up through the years.

This version includes a huge bag, great quality too and while the brand is not showing I still managed to dig up some info on similar bags and the price ain’t cheap and best of all this bag is the same as in the game, all the pockets and so on. Stunning!. 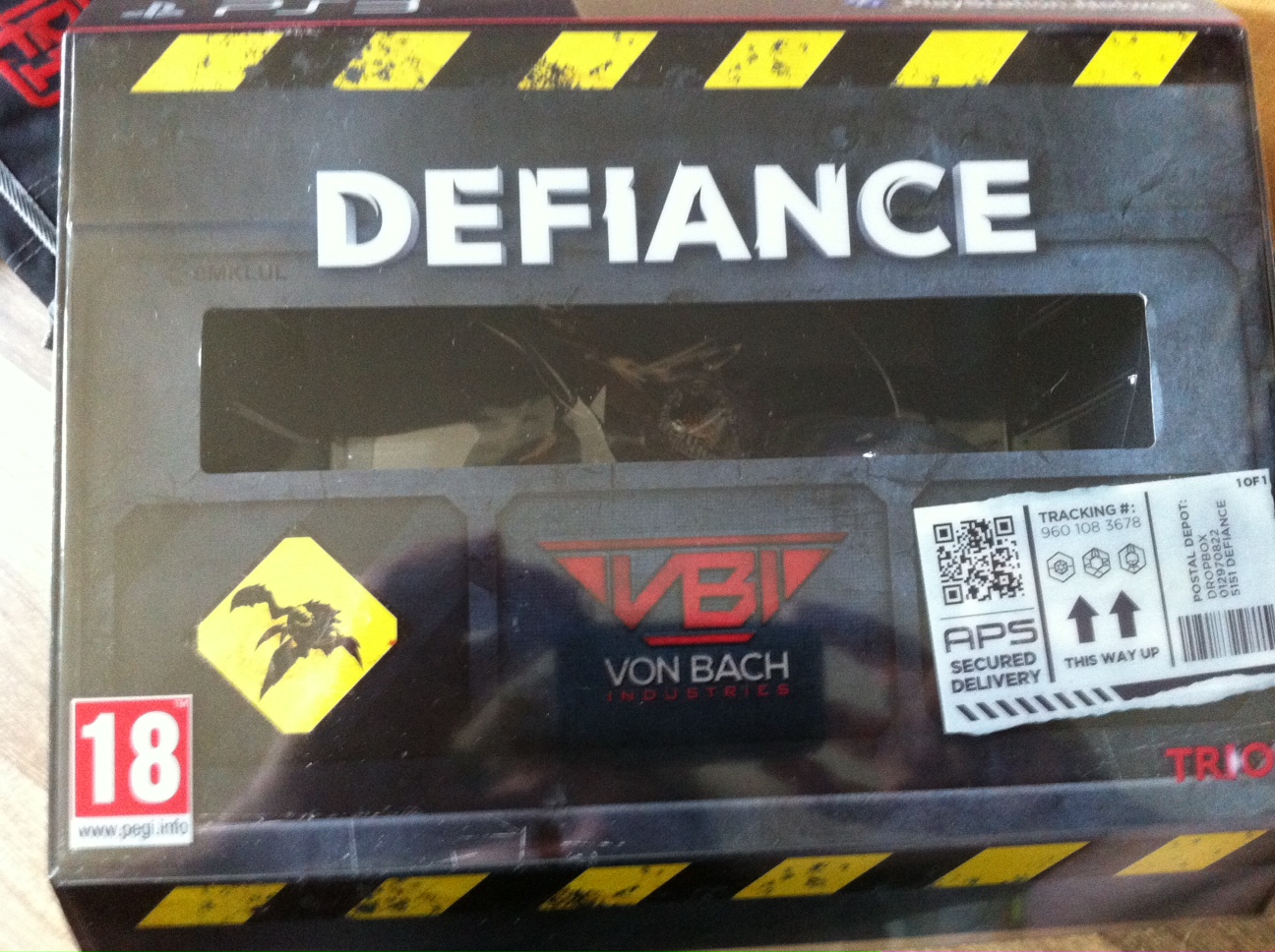 This is the special edition box and it’s one of those “Ghostbusters” boxes where there’s a monster inside and the box is full of warnings and pictures of various things, explicit quality!.

One heck of a box, it even has those “flaps” openers on top. 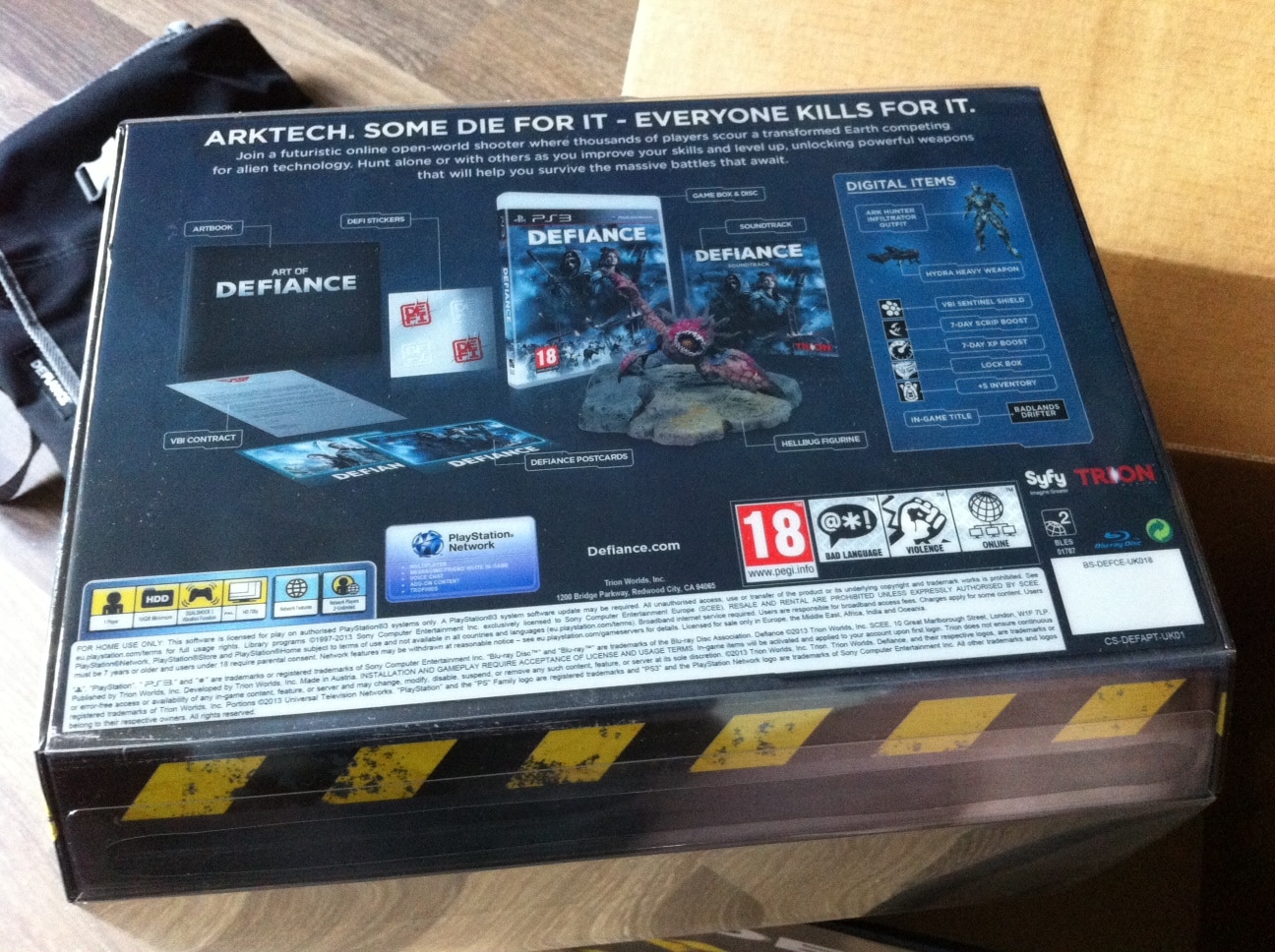 Here it shows the content of the Special Edition, amazing how I got all of this so cheap, I mean.. I got the Ultimate Edition stuff mentioned above and all of this! it must have cost a fortune to produce?. 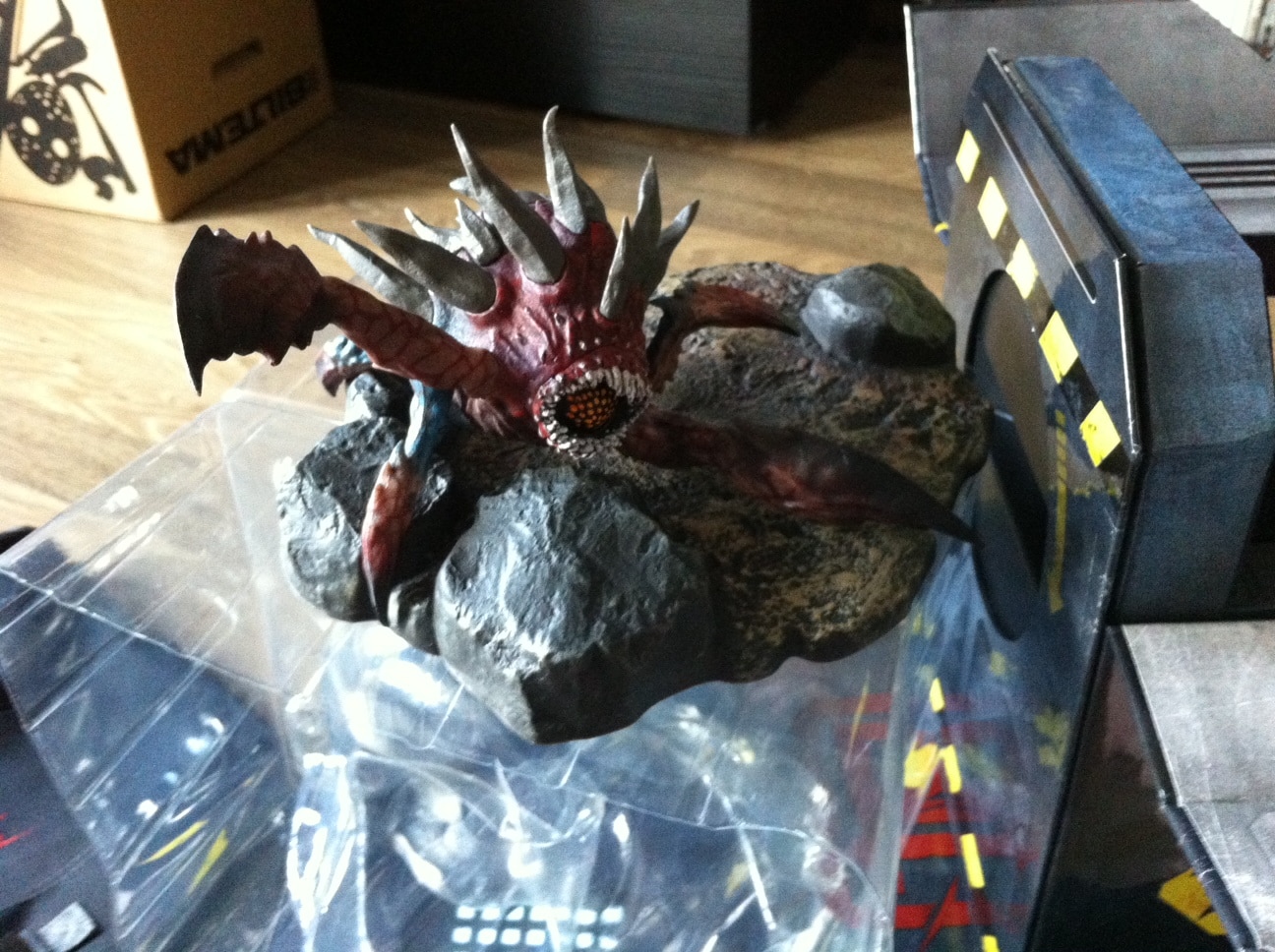 Here’s the figurine, sadly the figurine is not attached to the “ground plate” but still this is pretty cool and the size is perfect, not too big and not too small.

ARKFALL! time! ok no, I will not shoot this figurine to pieces, 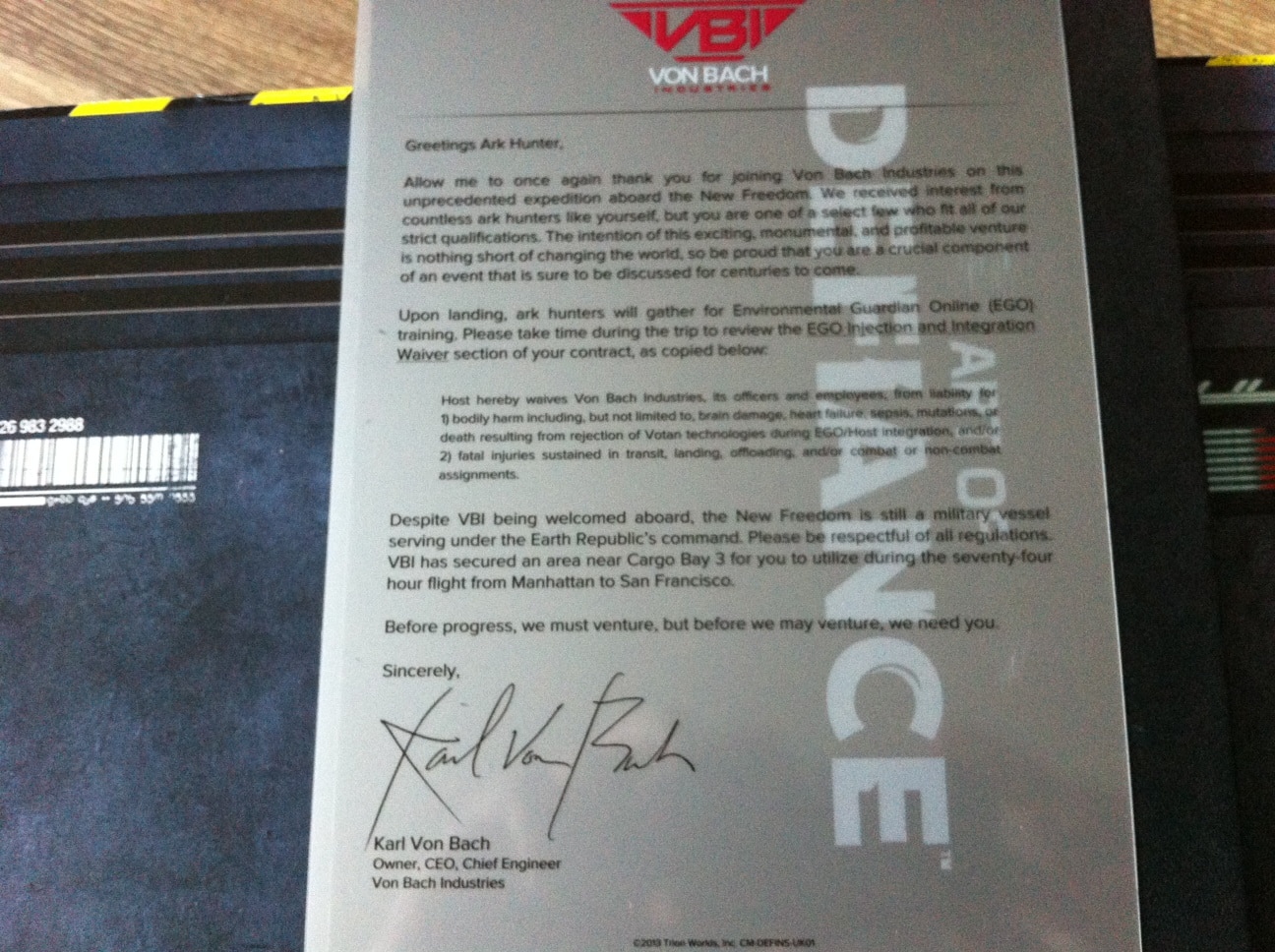 Very nicely laminated look on a transparent sheet, it’s the recruitment paper, looks authentic and could have fooled anyone I think (ok maybe not…). 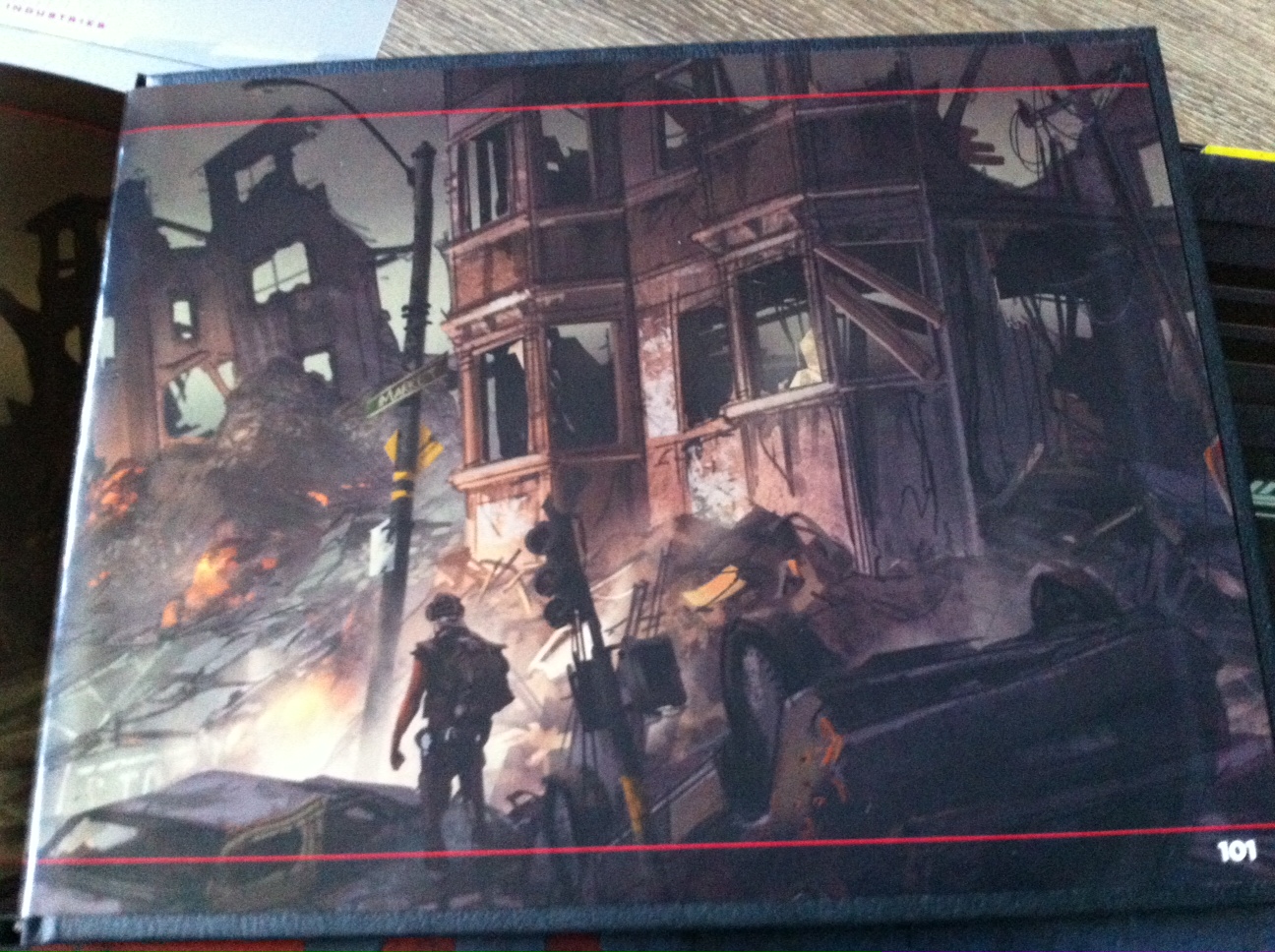 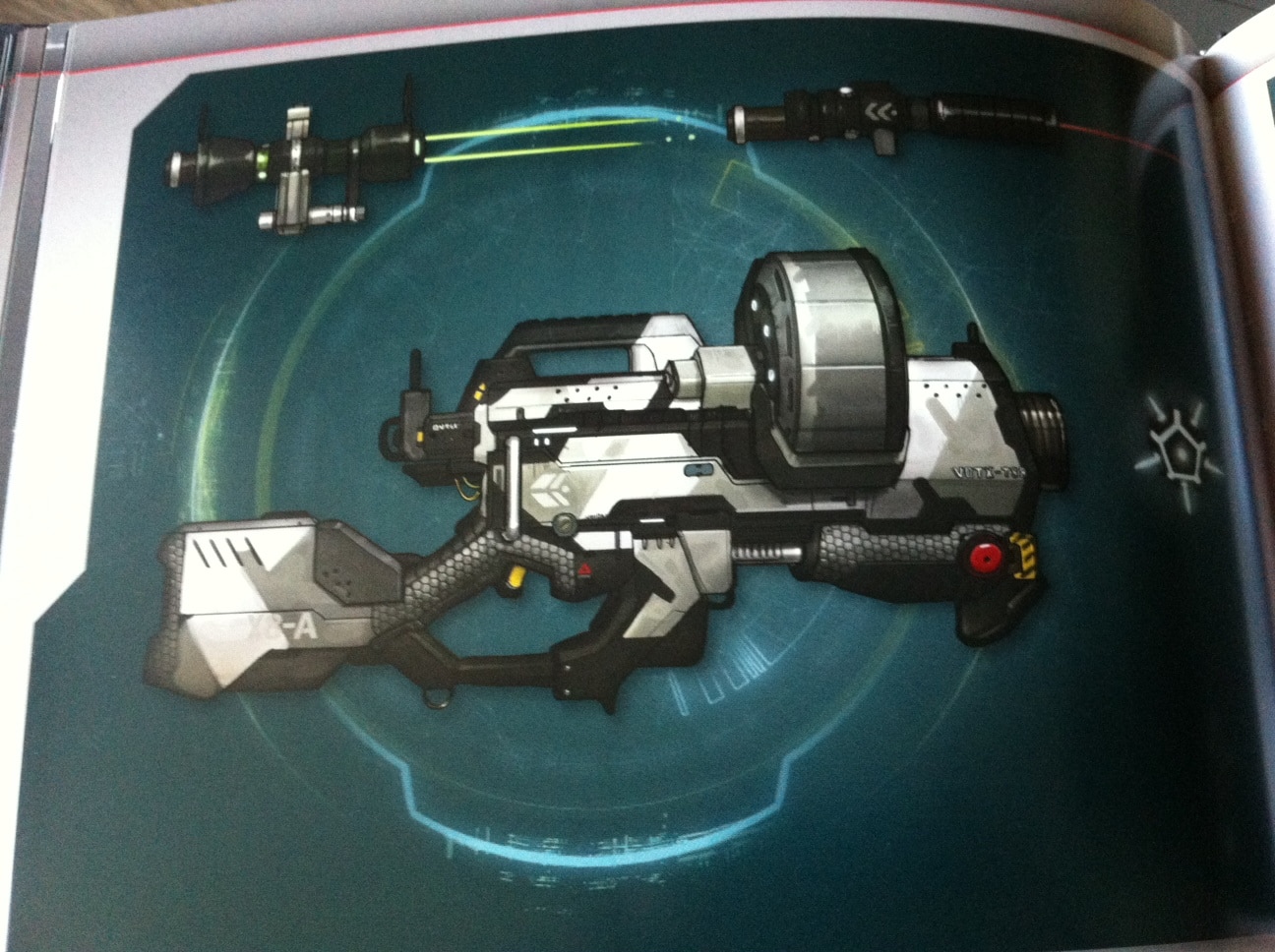 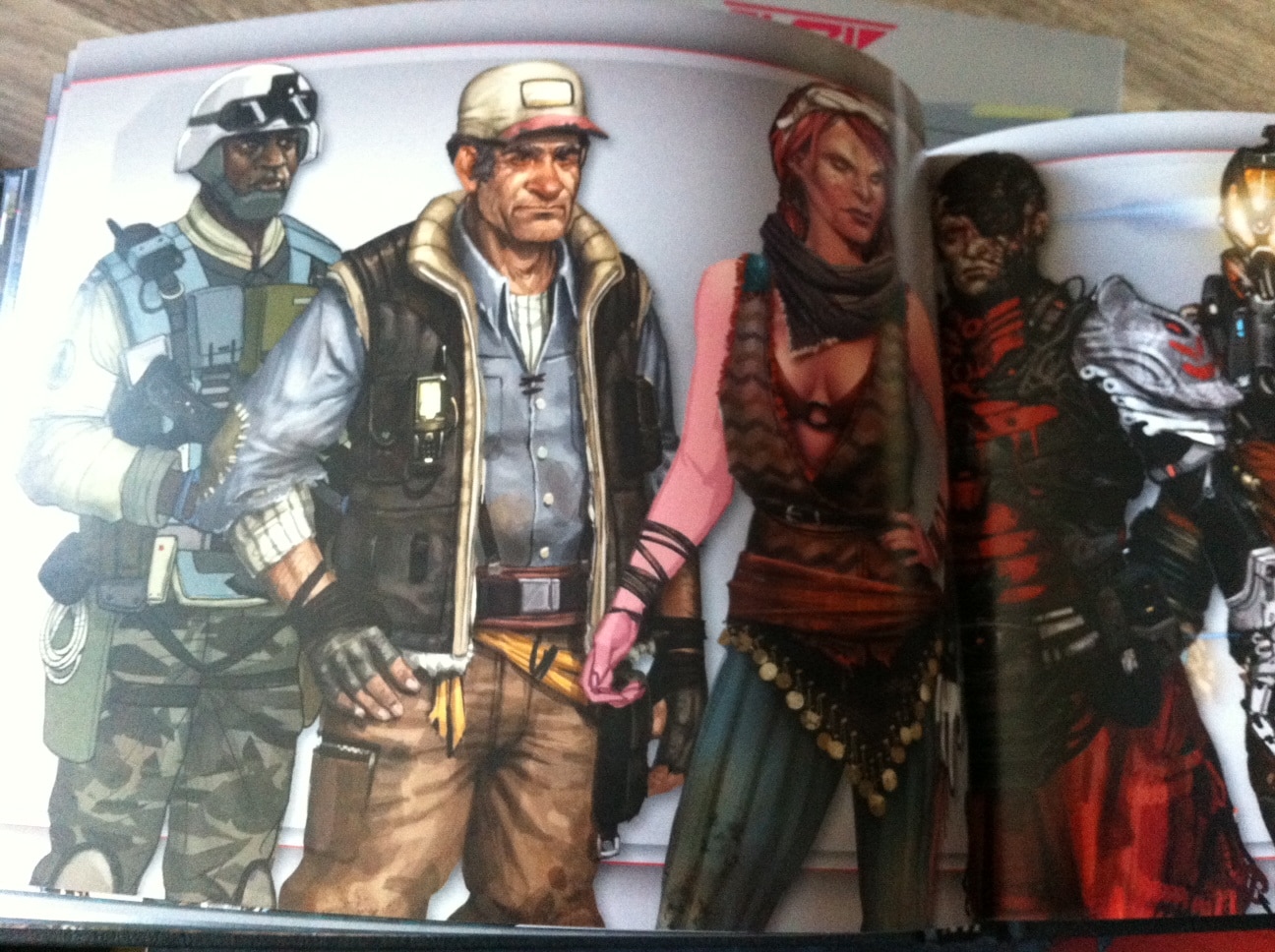 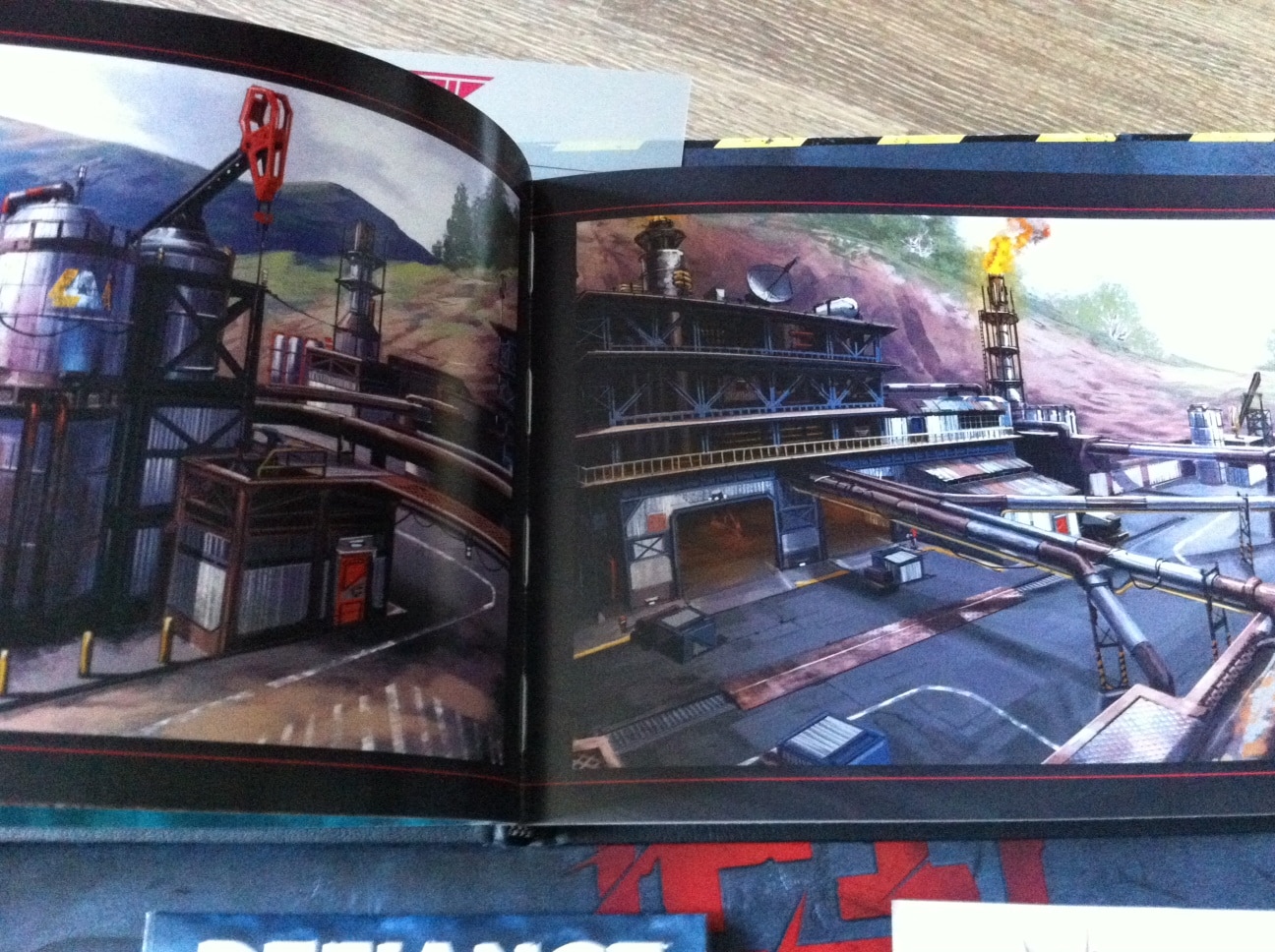 Some pictures from the Artbook, the artbook is 101 pages! so no i have not taken pictures of all but the book is of the “now” usual quality, great quality and yet again it can’t have been cheap to produce, this book (like most others) will be one I will drool over for years, game art and general fantasy art is just the thing for me. 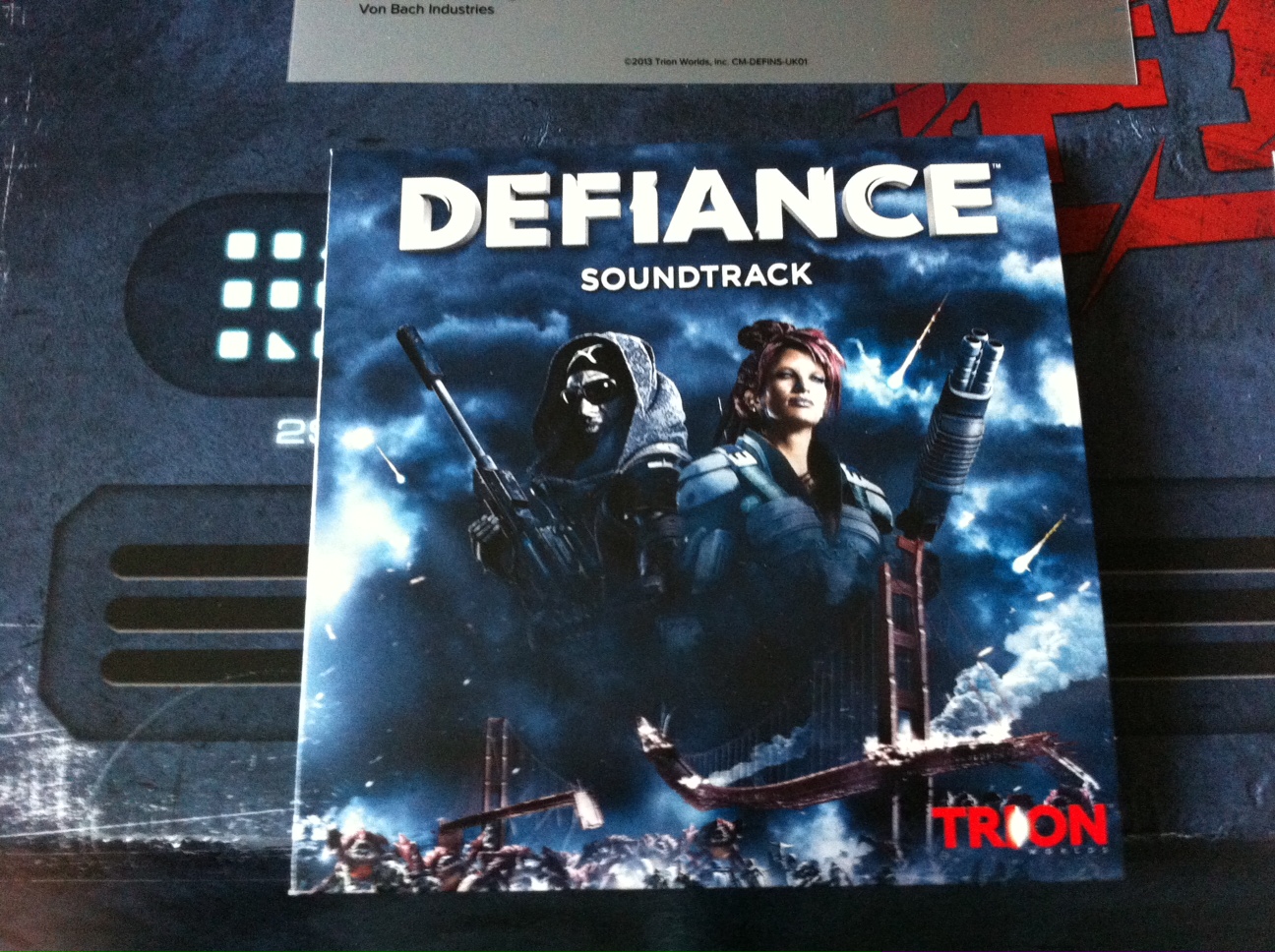 The soundtrack, not sure if I even noticed a soundtrack in-game but yes it’s there and according to many fans the soundtrack is pretty good too, I need to check it out for sure as in-game I just play and if the sound is good then I don’t turn it down or switch it off so… Cool how they added an actual medium instead of a digital download code. 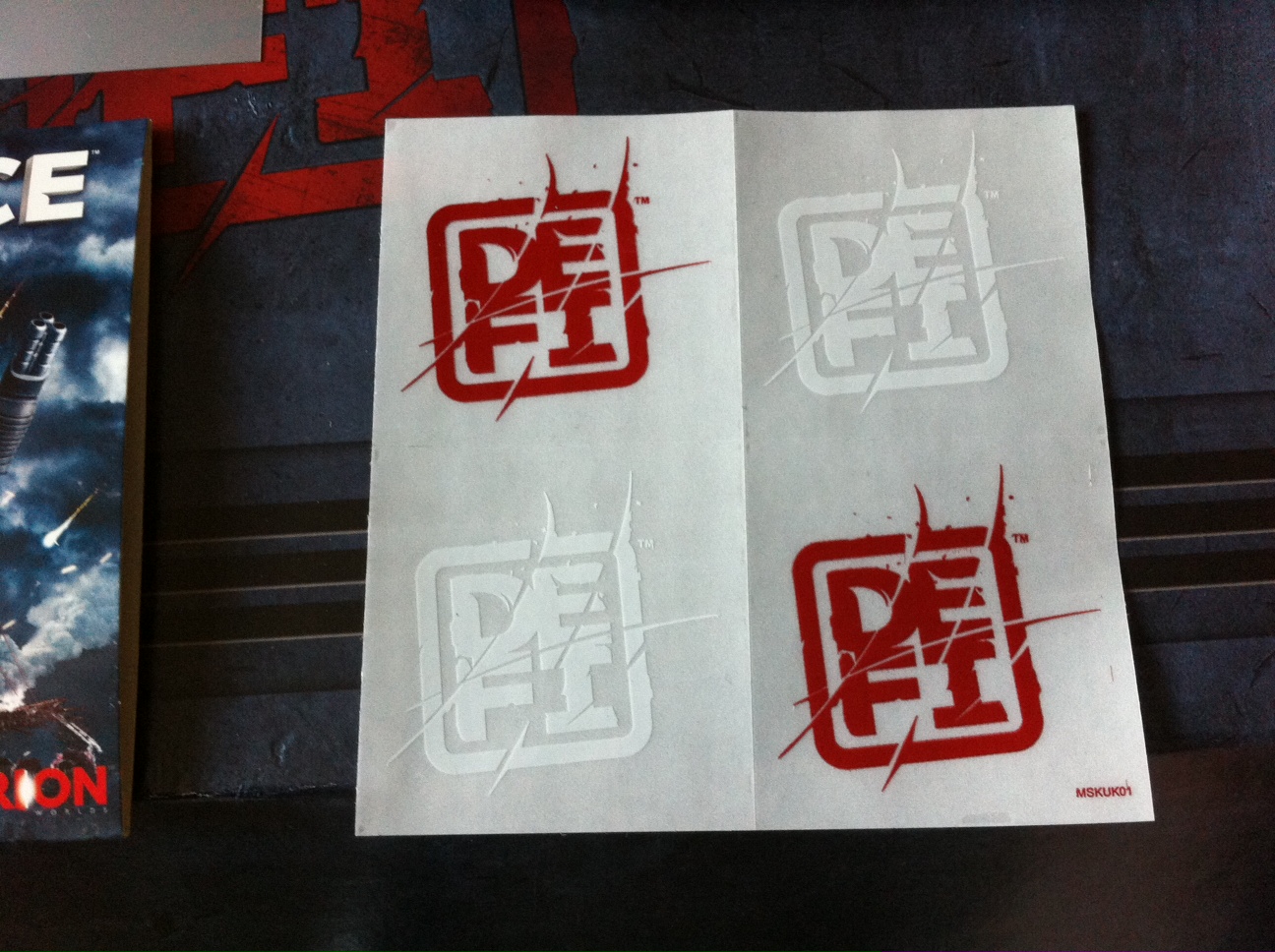 What’s a Collectors Edition without some stickers? boring transparent stickers this time around but they will do for now. 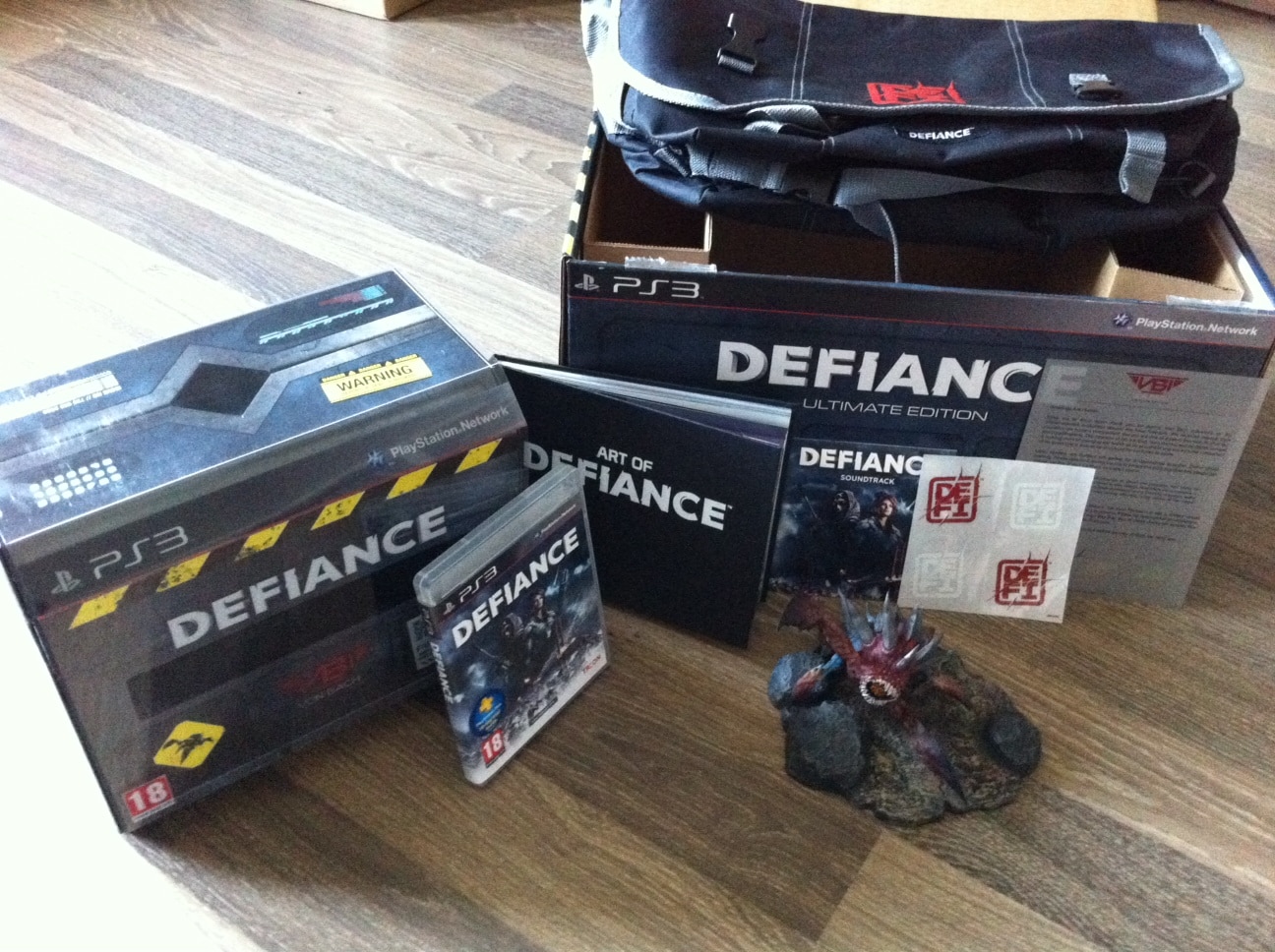 I guess you guys hate me for finding this one but anyway it was on Amazon.co.uk but they’ve bumped the price up now.

Only 1000 copies were made of this Ultimate Edition and it’s amazing how these things haven’t sold out yet, overlooked due to little information at the websites/shops I guess.

A final message to others out there, the Season Pass is located inside the actual game box manual, so they even made a special game box (which evidently is exactly the same as the normal release) run just for the season passcode on the manual.

PS: It was worth it to buy the same game twice (standard version and now later the this one).

Follow Us... Inspire Us To Get Better... Keep The Flame Alive
Week 33: Stuff In The Drive You’ve been “Helghasted” – KILLZONE 3 HELGHAST EDITION

3 thoughts on “Defiance Collector’s Edition – One Of A Thousand?”