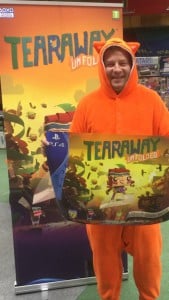 Tearaway Unfolded: Special edition showed up in my mailbox a few days ago and while it was a surprise i still had a feeling why it popped up the reason?

The reason must be this promotion thing i did right? , well that is my guess.

I ran around the convention in a “squirrel in the game one-piece suit” for a while. I managed to get some attention alright and maybe enough for me to get this freebie too (which would be my second freebie in 1 week).

(I guess you guys read that Retro spillmessen article i published a week or so ago? if you haven’t then you should do it as it covers a lot of cool stuff from the largest game event in Norway.)

The Tearaway Unfolded Special Edition box looks like it is going to burst, the plush toy is a bit too big for the package, a plus for collectors really as this box design is bound to be damaged over the next years/decade so the value on a mint box will go up.

Say what you want, this box is awesome looking and certainly a game i would buy in a heartbeat just because of the box and its design. Cardboard rules!.

So this is the Special Edition right? well, how come there ain’t any steelbook in the package, odd. I guess there’s a second edition (perhaps Collectors Edition?) that got one then?.

The plush toy is quite charming but i have to question why the colours are “off” when compared to the in-game ” Iota “, i am sure there is a reason for it and one i will look into once i actually play the game myself.  My son (6) loves the game, he has so far achieved 25% or so in the trophy list which by the looks of things is quite good as most of the trophies are rated “rare” for now.

Ok, so this is the stuff in the box + a PSN code sheet which i forgot to do a picture of. Not a huge box or whatever but it looks good and it was free too.

I did some research about this box and i found out that this box is actually quite rare from the start, this Special Edition was only released in these countries: Australia and New Zealand, France, Iberia, Benelux, Norway, Middle East, South Africa.

So let’s see if this will end up like the Lara Croft box, supposedly rare but found everywhere in Norway (well not everywhere…). America had one too but that only included a downloadable copy of the game (along with the other goodies from the C.Edition).