So the PS3 version was a brilliant game but how good is the Vita version compared to it? I have heard good and bad stuff about the game since the release of the Vita version and to be honest i didn’t expect too much really.

I knew that the Campaign mode “road to glory” had been removed and at first i thought that had been removed because the game was too big to fit on the memory card, sadly that’s not the reason as the game is only 600 MB or so as it stands now.

I have absolutely no idea why the campaign mode was removed as it’s not like the game is broken, bad or a cutdown or anything, read on and get surprised.

The thing that surprised the most was that the physics is really good and it feels almost if not the same as the PS3 version although a bit hard to compare due to various reasons like the lowered FPS and the Vita controls (same but a bit more quirky to hold).

Graphics quality has been lowered as well as the resolution which made it pixelated but by all means better than Asphalt and Spy Hunter which had pretty lame quality compared to this and Need For Speed: Most Wanted.

WRC is all about driving fast so the graphics don’t mean much if the physics and handling are up to scratch. The Vita version may look great but the PS3 version looks a million times better. 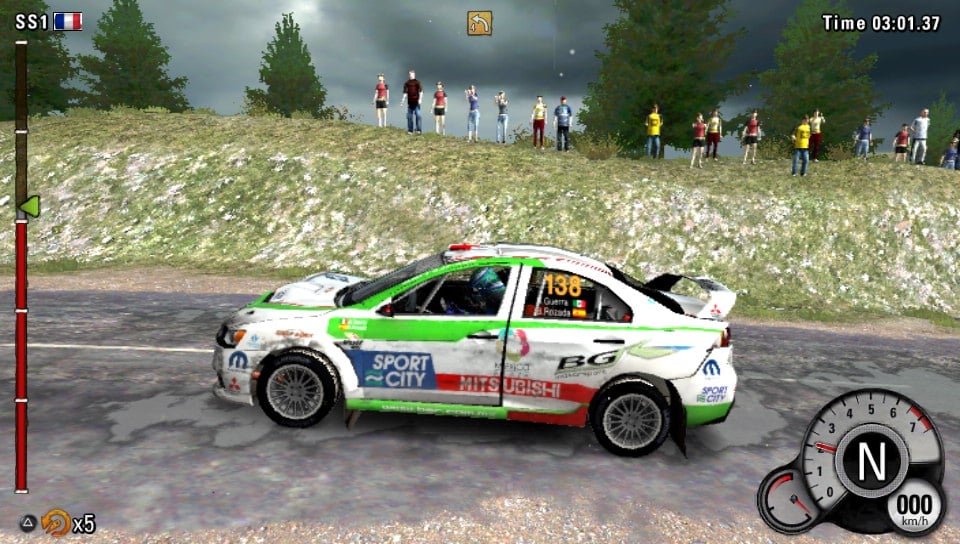 Damage Models and difficulty associated with it is intact with the PS3 version.

Rain and Fog ain’t anywhere near the quality of the PS3 version, it’s just some splashes and why it’s like that is quite hard to understand.

The car gets dirty and you can wash it away when driving in water so it’s not all that “empty”.

Track details are gone on several tracks although i think it’s about the same on the whole.

On some of the tracks, there ain’t much shadow maps used so it looks quite lifeless at times when you compare it to the PS3 version. Replay modes are the same as the actual driving so there ain’t any “cheating” in it, so what you see is what you get.

There are no signs of those horrible minigames in this version and that is a good thing as those speed gate, drifting events made the ps3 version look too casual and generic (think DIRT 3)…

The sound is the same as in the PS3 version, standard fare really but the stuff that is in there makes the gameplay better as its easy to know and learn how to drive with the sound on, like drifting handbrakes and normal brakes and so on.

Is the game a quick and dirty port? , no it’s not but it could have been better as we know the Vita hardware is so much better than this but i am thankful for what they have done so far and i hope Milestone will do another WRC game soon.

If you want to read about the actual game and not the differences then you can check out the PS3 article of the game as that is more informative about the gameplay itself.

The article is located here.

See? some tracks look awesome and other not so much… WRC3 VITA is not a bad game, actually, it’s one heck of a game and one that i platinumed and that’s nothing i would do if i hated the game.

I wonder why so much stuff was left out of the VITA version, it doesn’t make sense really but i guess they want to add it as DLC but so far there haven’t been released much.

The Online part of the game is the same as the PS3 version and there ain’t a sign of LAG or dropouts or whatever and that is quite a feat when you compare it to other games these days.

3 thoughts on “WRC 3 On The PSVita – Rally Cut Into Pieces But Still Brilliant!”