It’s no secret that I love shoot ’em ups and especially Oldschool ones, Habroxia was released a few weeks ago to little fanfare and therefore it nearly passed me by, but luckily I was looking for another game that came out a while ago and while I went through the last months of games on the PlayStation Store this game popped up out of nowhere.

This write up is mostly for the PlayStation 4 version but it is also available for the Nintendo Switch and PSVita as digital downloads and yes the PSVita / PS4 versions are CrossBuy (woohoo), but before you buy the digital version… see below! 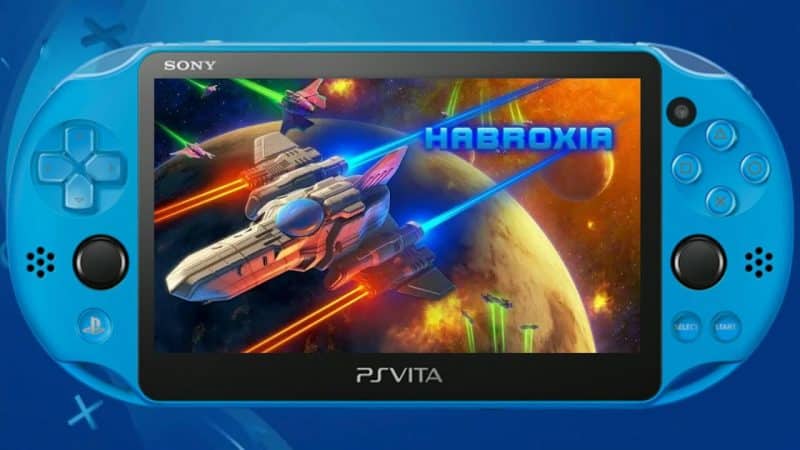 Habroxia’s developer Lillymo Games got help from EastAsiaSoft to publish this game in physical form for the PlayStation Vita (YEY!) and while I have not pre-ordered that edition yet I still want it badly as it looks incredible (as usual), the Limited Edition box can be bought at PlayAsia. 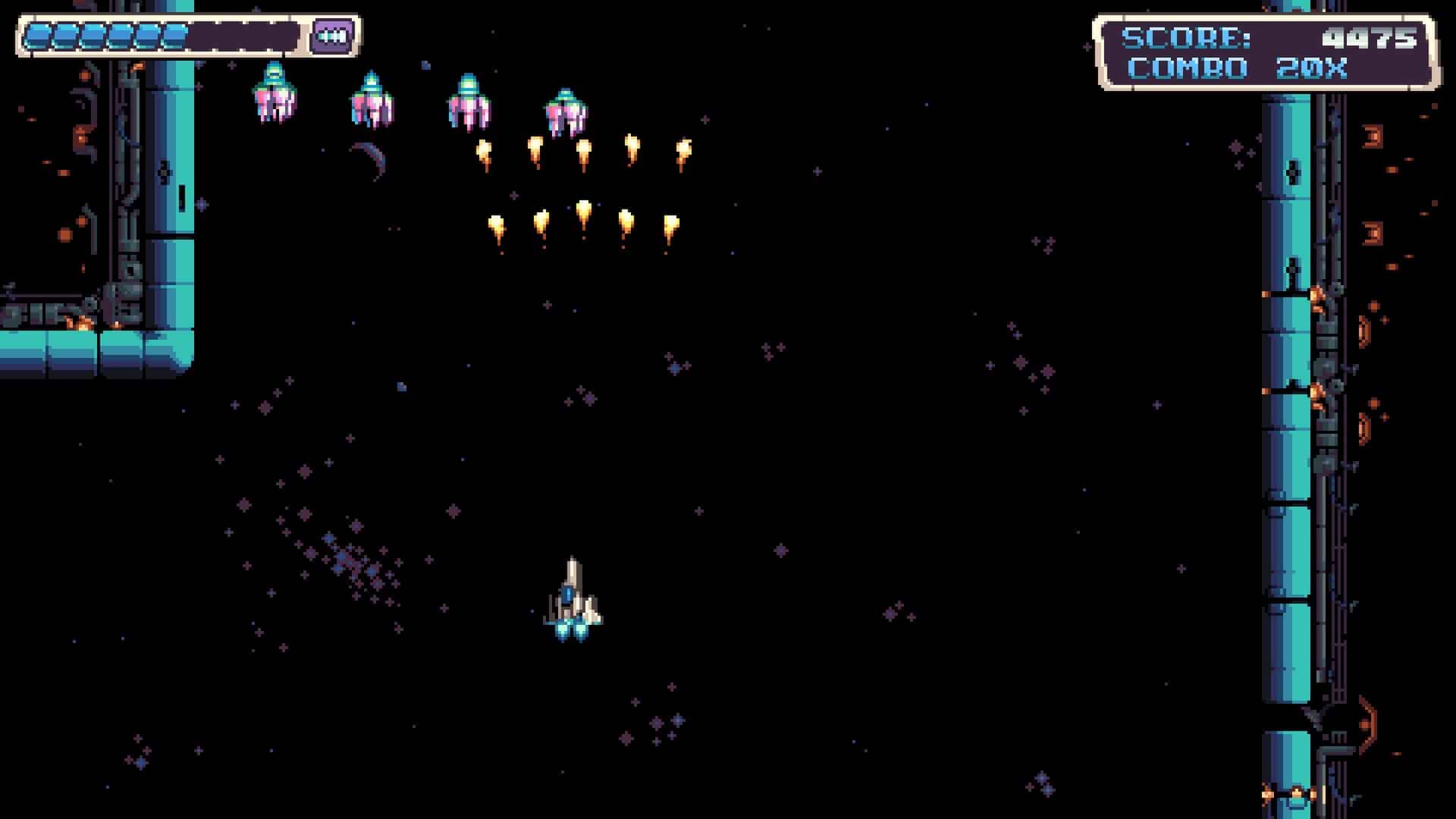 Habroxia mixes vertical and horizontal game modes between levels and sometimes mid-levels by itself, you can’t change it yourself (which is good) and the transition is smooth and lovely with a bit of Mode7 type of sprite scaling look-alike trickery (for fun).

The graphics feel mostly like a game from the late 80s but it still manages to look alright without going the awful pixelated way that so many games do these days, the framerate is always 60 frames and there was never a single frame drop to be seen while i ploughed through the game earlier this week. 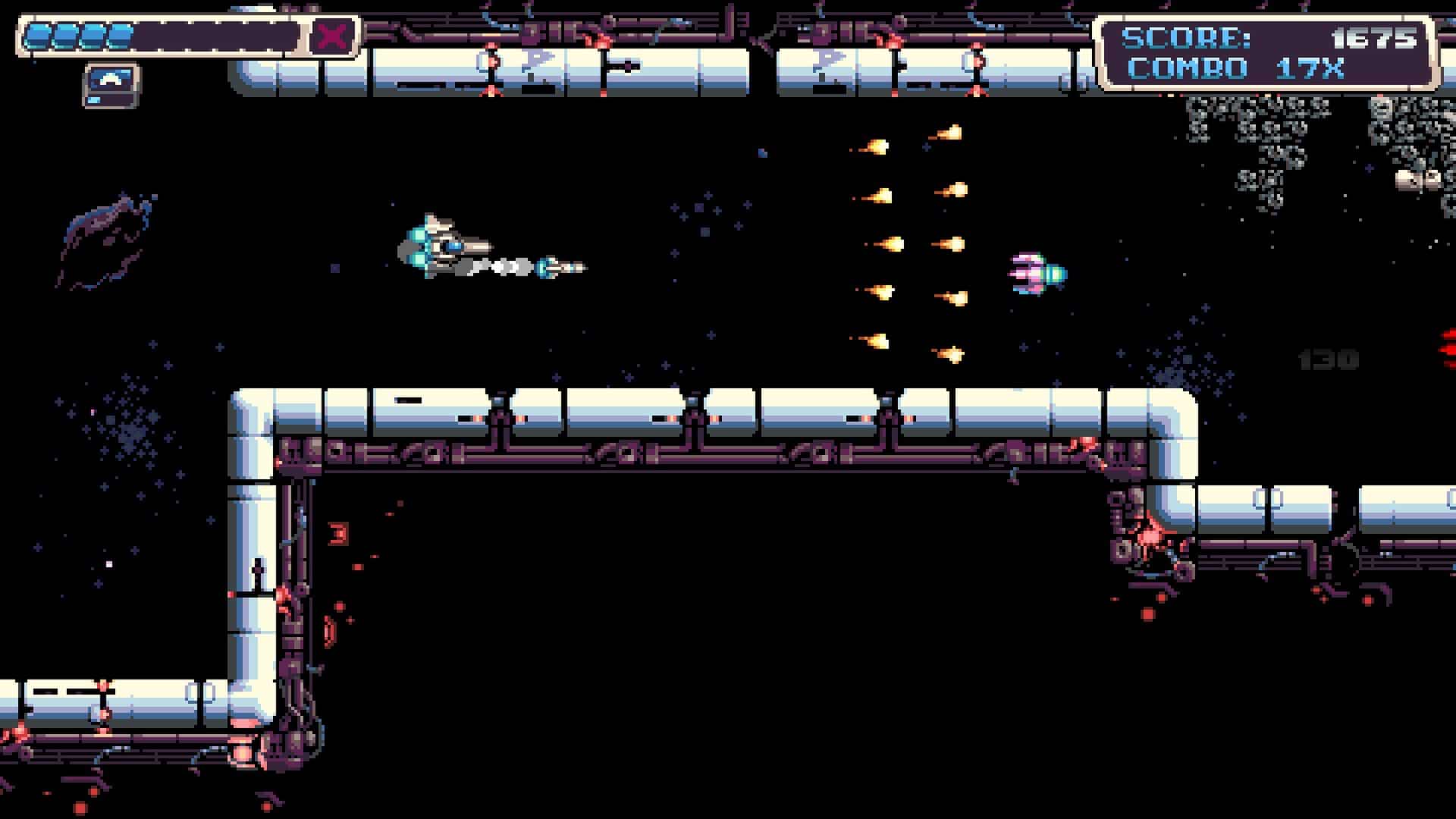 The weapon system and mechanics are a bit of “both-worlds”, you buy and upgrade weapons between levels but you also pick up weapon upgrades throughout the levels while playing.

There ain’t many weapons in the game but the ones in here (spread fire upgrades) certainly feels more than enough thanks to the upgrade system and implementation of it all. 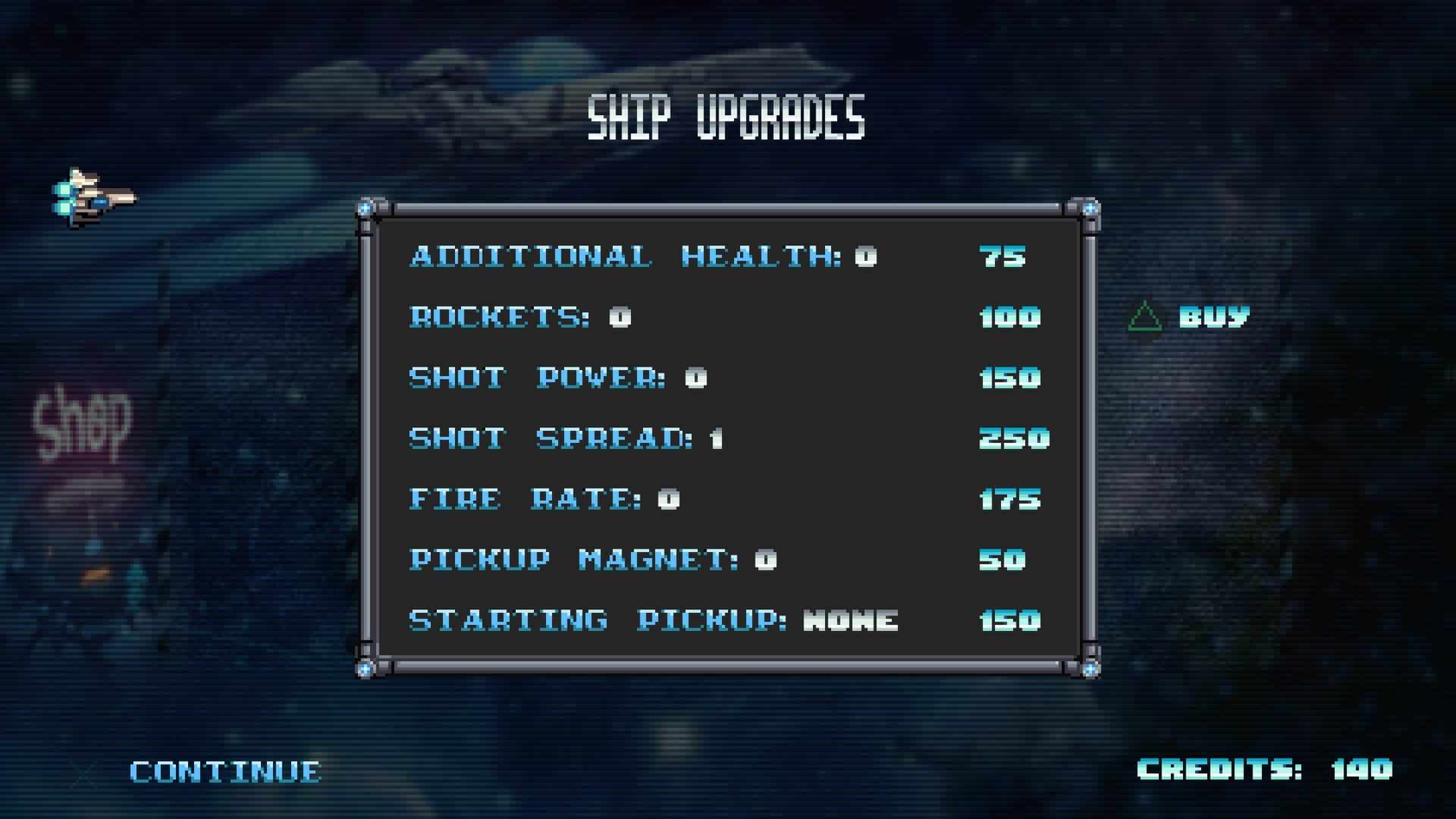 This is the ship upgrades menu and as you can see there ain’t all that much to choose from, I went with Shot Spread the two first times and then later I upgraded the Shot Power and Fire Rate and by then I had more or less become invincible and this just by replaying the first few levels to gain credits (cash) to buy weapon upgrades.

Some might think it is a bad idea to reward the player with upgrades that lasts forever but I love that you get rewarded by playing the game a lot and won’t have to replay from the very first weapon and upgrade every single time even though it does feel like cheesing your way through the game.

The game got quite a few boss-fights spread over the 15 levels in the game and the variation is good and I am sure some of you out there might struggle a bit with them too but by the time I got to them, my ship was very overpowered thanks to replaying earlier levels a lot.

The game keeps on giving and by the time you have completed the game, you will have at least two additional game modes which are both fun and worth your time (trophy wise). 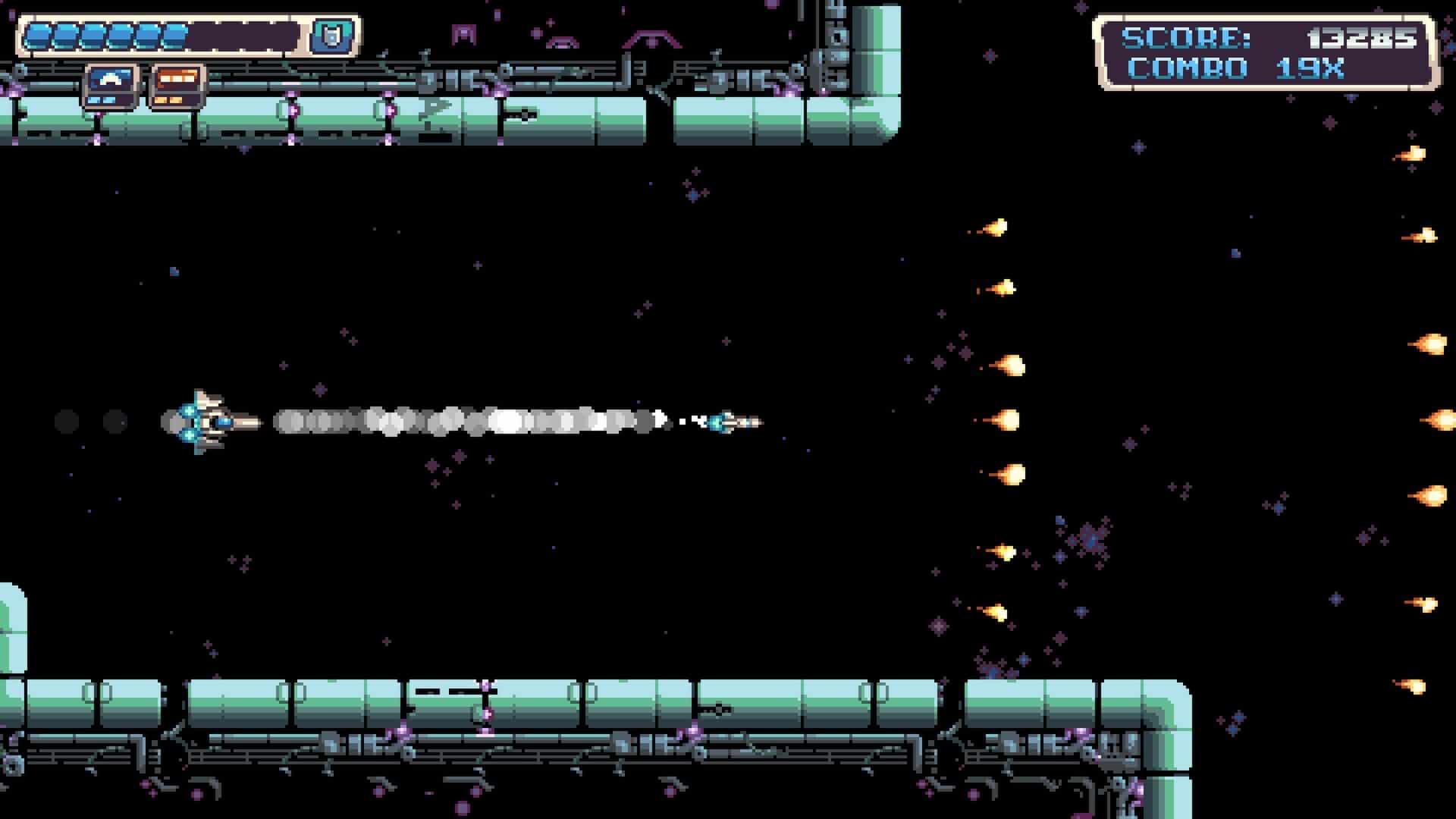 The sound and music in Habroxia is somewhat a letdown, well especially the music as there are just too few tracks and not all of them are memorable, to say the least.  The odd thing though is that it grows on you and you might find yourself tapping your fingers at the controller (or whatever) at one time while playing, so there’s something about the music in the game but I honestly think it deserves a better one nonetheless. 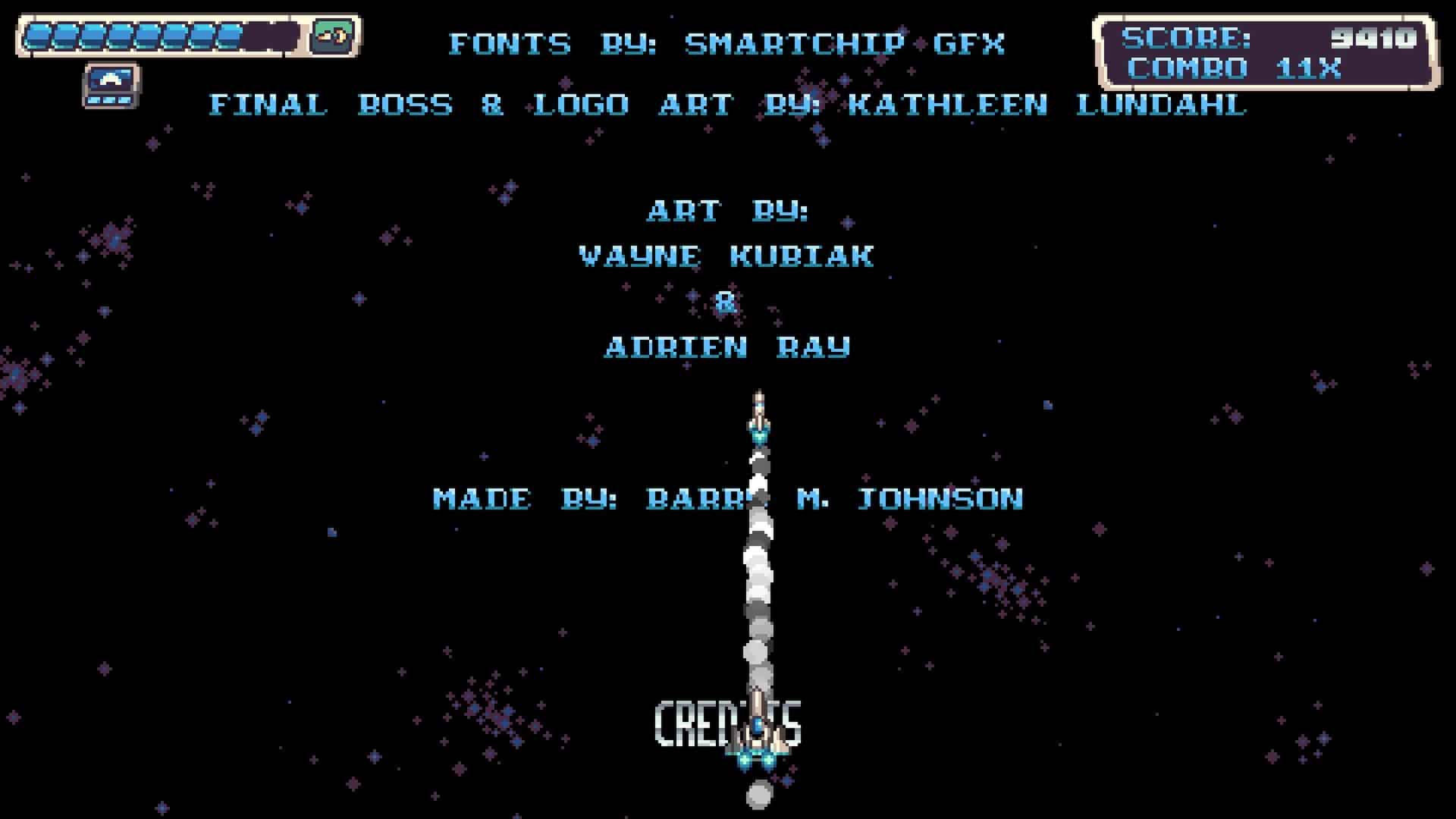 One of the things with Habroxia is that it also tries to be one of those high score chasing types of games but it is done in a very subtle way with a scoring combo and kills linking system which means it won’t ruing the actual gameplay with contemporary stuff like that you have to complete the level with X kills and so on or else you must replay it and so on.

Habroxia is one of the better games retro Shoot ‘Em ups that I have played on the PS4 lately as it never tries to be something it ain’t and what it does is done in a very elegant way which shows a lot of love towards the never-ageing genre of the Arcade alleys of lost time. Habroxia might be too easy for the elite but they will still have fun while it lasts and the game is only 5 Euros (or so) which means that this is a game that everyone should take a chance on.

Give this one a chance, you won’t regret it.