There are a few games from my youth that i somehow managed to nail perfectly even if they were next to impossible to master for most.  Gradius ( or Nemesis as it’s called in Europe) is one of these games that i completed without losing a life, and till this very day, i still remember the enemy patterns for most sections of the game.

Super Hydorah is clearly a tribute to the old Konami shooters of the 80s, to get closer to Gradius than this one is most likely impossible without lawsuits and whatnot, the enemies and the level design of the first Gradius game is very much present in this game and while playing it i asked myself several times if this was more than a fan based title (read.. a licensed reboot/*make of the series(?)). 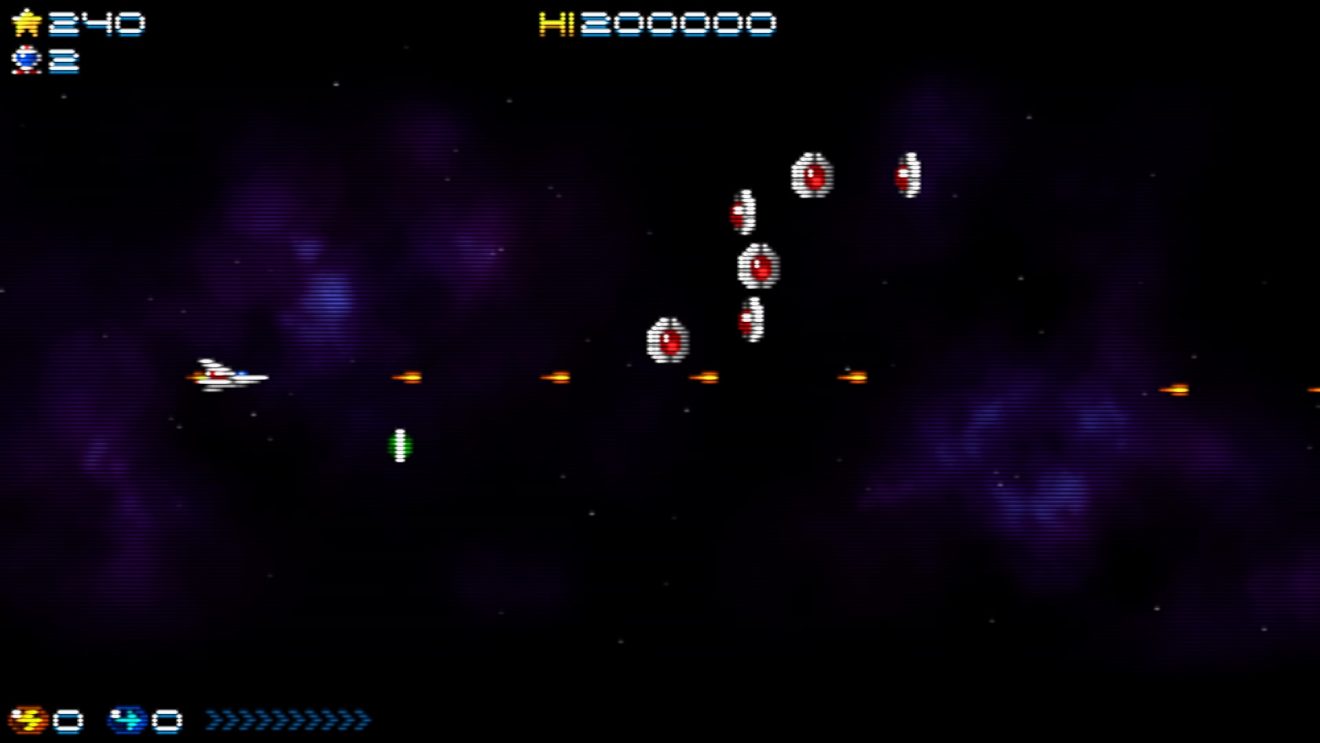 The very first enemy wave in the game is almost the same as in Gradius, a little bit scary really but luckily the music ain’t the same and the weapon upgrade system is a wee bit different too (at first anyway..).

I must admit that i really wanted the C64 music from Nemesis here, come to think of it i would love to have all the music and the game too… 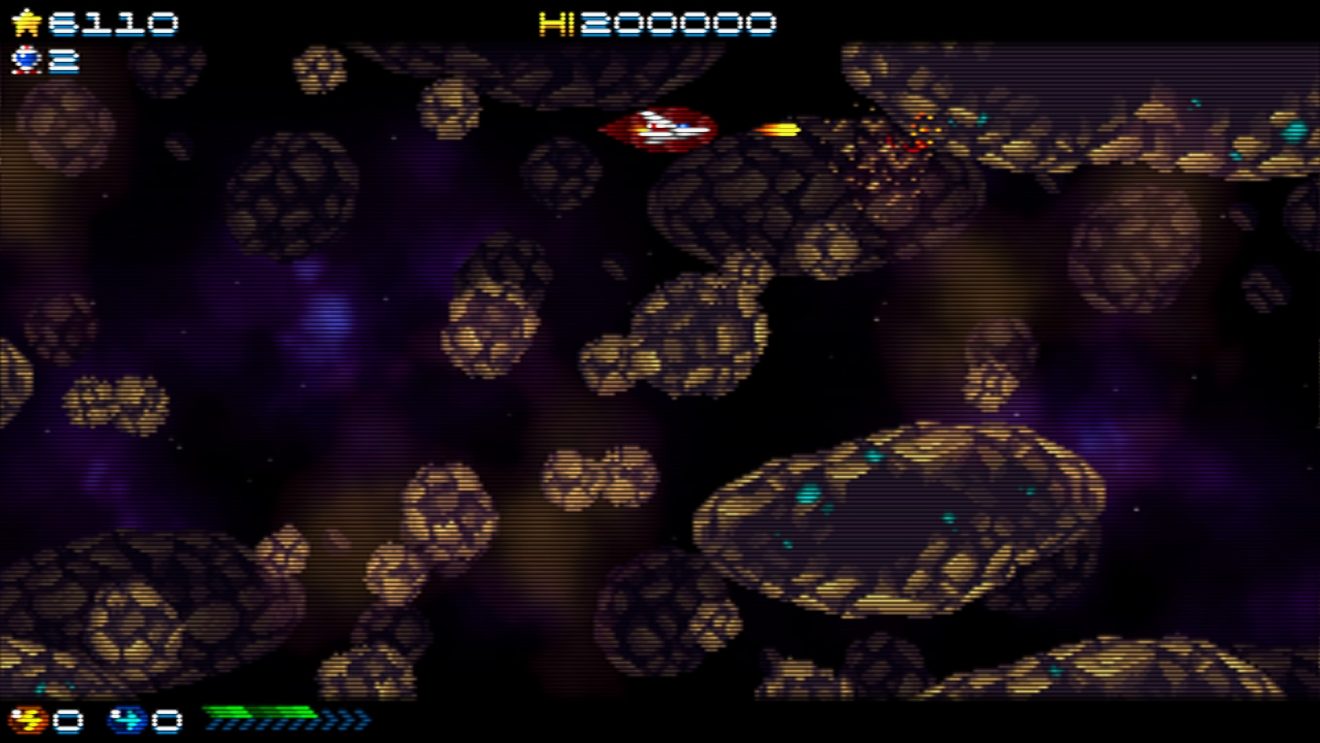 Several of the levels in the game feels “stolen” from Gradius and while good i always ended up wanting to play the C64 game instead of this, one of the reasons for this is the upgrade system as it seems to level up the weapons in a very confusing way by picking up lots of pickups before getting one instead of the quick “waggle” option from the arcade*/c64 version. 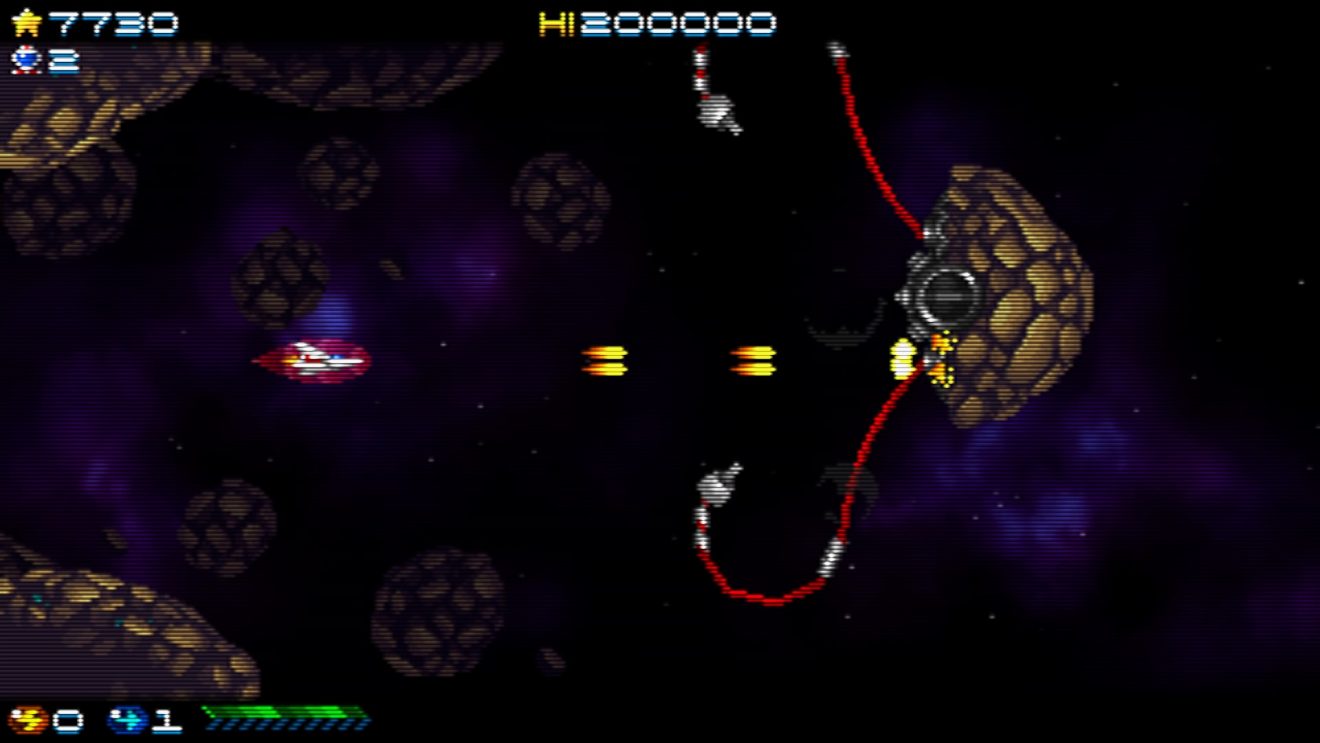 This is the first “boss” encounter in the game, not as cool as the spaceship in Gradius and definitely not as chaotic either, but for some reason i still died a few times, the bullet design feels off at times and while simple it still tricks you into dodging bullets without needing to do so.

This seems to be an ongoing problem for me throughout the whole game, there’s something about dodging bullets in this game that just feels broken and it’s very clear that i need to practice a lot before i will master this game for sure.

After each boss fight/end of a level you get a new upgrade, the upgrade can be anything from the main weapon to rockets etc and once unlocked you can u select any combination of the three that you want.

You also get access to a mission select screen which lets you select different routes, you can’t replay missions with this option sadly but it does offer some diversity and it paid off for me when i was really stuck on one particular mission.

The graphics get better throughout the game, some of the levels will look very familiar to Gradius and others not at all, the enemies are varied and most if not all got different attack waves which add quite a challenge, to say the least.

The graphics never impresses but the style and retro feel is consistent and definitely never falls short of what it aims to do, and maybe most of all is that it stays true to the 16/8bit goal and not just a typical “let’s make something look retro” thing. 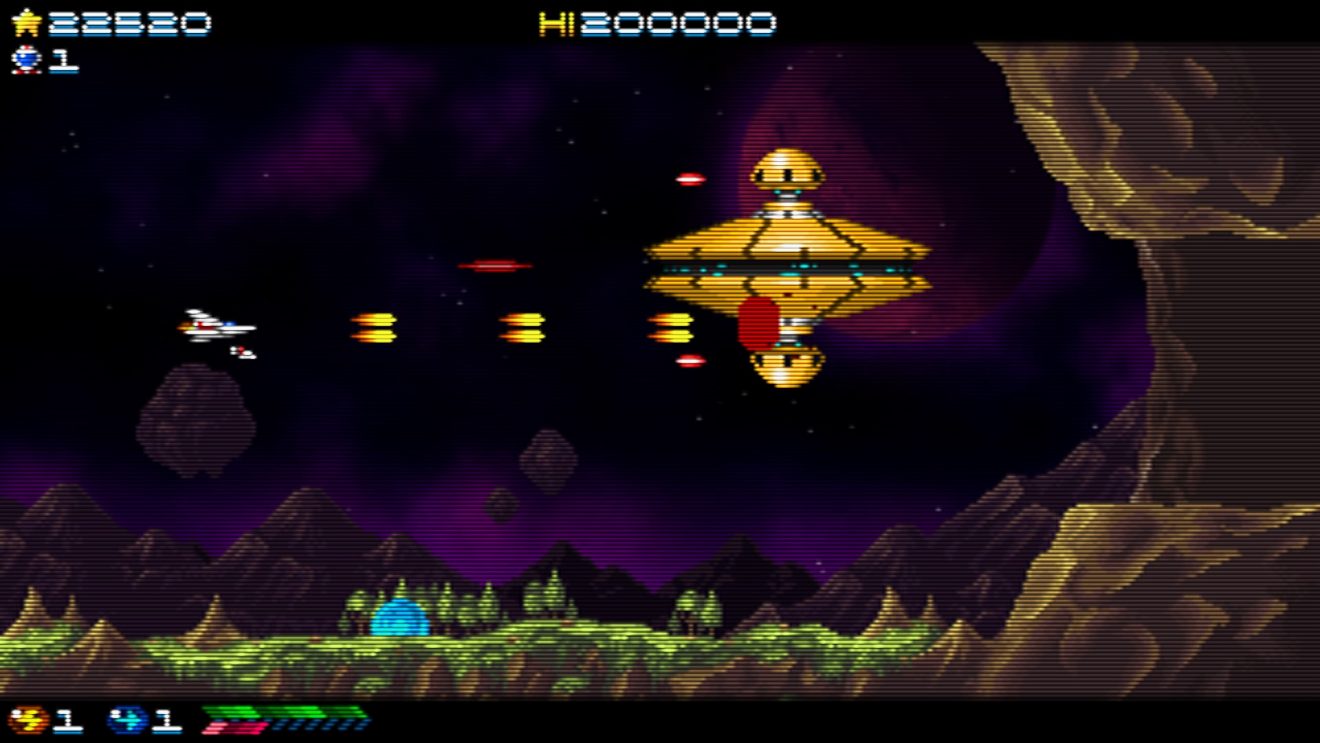 This is the second boss encounter, pretty sure that I’ve seen this one somewhere before.

This boss is much easier than the first one and i also think it’s better too. 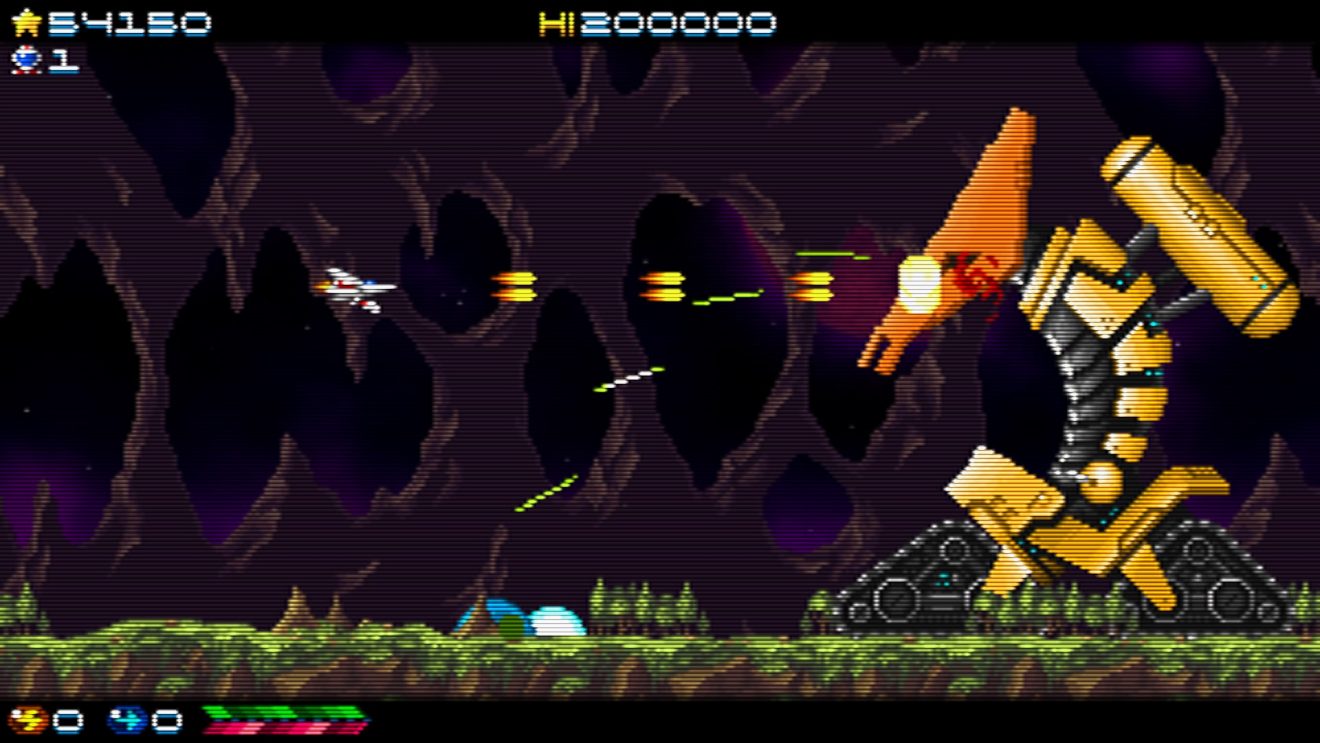 This is the first hard boss fight, died a lot of times here and this is where i first got to understand the “insert coin/continue” system in the game.

A brilliant boss fights this one and certainly a proper challenge too, i bet that this will be much easier after a lot of retries as its doing everything in a certain order.

If you lose all your life’s in the game then you get to a “continue?” screen where your score will be reset and you will have to start from the beginning of the level again, the more of these continues you use the lower the score will be which in the end will be pretty crucial to your “trophies/achievements” list as many of them are targeted towards you level score. 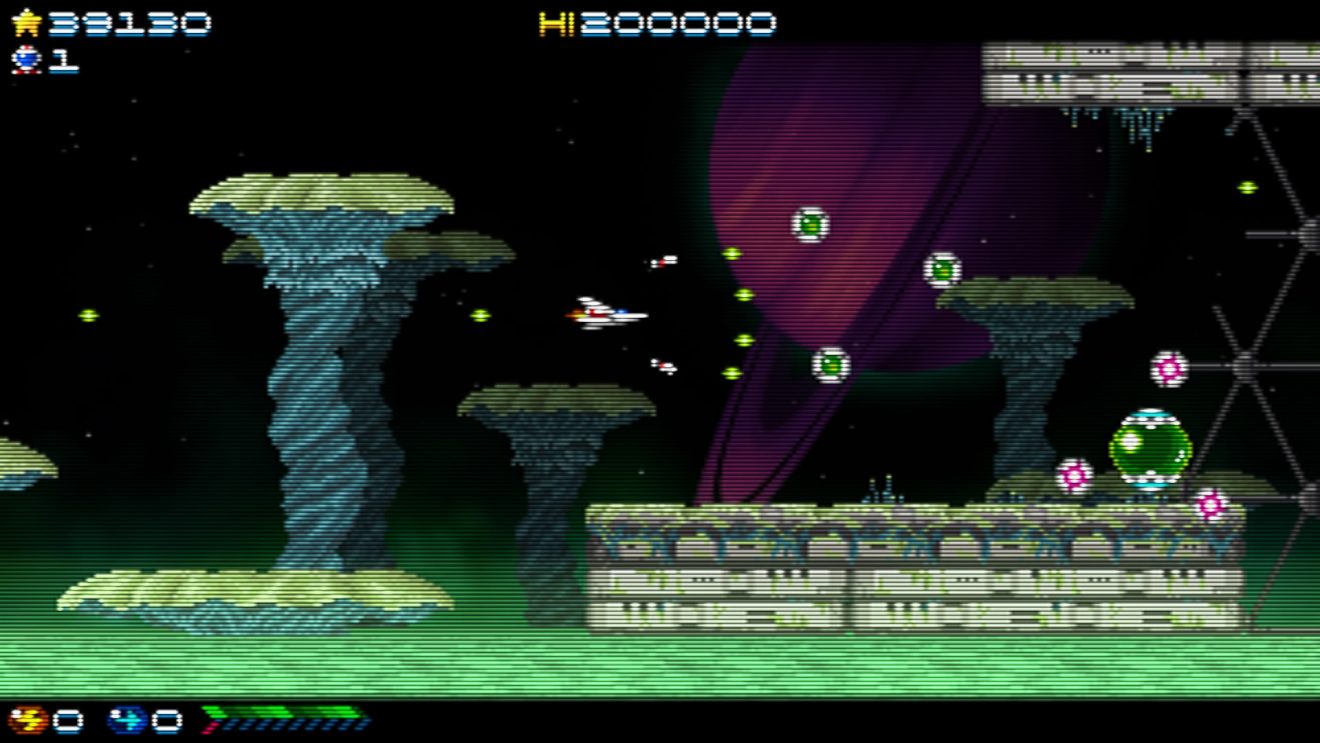 You will eventually level up your ship to be one overpowered shooting machine, i have not got there yet but as seen in the shot above, triple shots, dual rockets and “backwards shooting” is what i got so far and by the looks of things this is just the start of what to come eventually.

I need more time to understand the levelling and most of all to find out if its possible to keep the weapons even after you lose a life.

One thing is for sure and this is that Super Hydorah got much more fun when i started to get all these upgrades.

This is the official release trailer for the game, it seems that it was a PC and Xbone title first and then ported to PS4 and Vita a few months later.

I have not tried the VITA version yet but to my huge surprise, it’s cross-buy!  For some reason the game wasn’t activated as a Crossbuy game when i bought it so i thought it wasn’t one, to fix this i had to download it directly on the VITA as neither WEB PSN & PS3 had it in the download list for some peculiar reason.

Super Hydorah falls short of being amazing, i struggle to find the magic spot and keep on sucking in the game too making it very hard for me to progress in it. I feel that it’s not the difficulty level that breaks the game but a technical one, for some reason dodging stuff in this game feels off and broken. The potential of this title is insane, to say the least, and I am really sad to say that this is a game I can’t really recommend to other than the super hardcore ones out there who really can’t get enough of sidescrollers.

6 thoughts on “Super Hydorah – A Taste Of Konami’s Gradius”