The Arcades, bowling alleys and burger shacks had them and every time i saw one i just had to check it out. I was flat broke 99% of the time, yet, I still had the urge to scout all over the town for new ones as often as possible even if all i would do was watching a demo screen on em.

So WTH am I on about? , Arcade/Coin-op machines of course! sometimes normal ones and sometimes massive ones that looked like cars, aeroplanes, ships, skateboards, bicycles or basically anything that the devs and manufacturers could come up with.

Force Feedback, huge screens, loud sounds, pneumatic, hydraulic cylinders, lots of electric led lamps and switches was just a few things that made the Arcade machines so special and popular.

Do you miss them?,  the video below shows Force Dynamics latest contraption called “401CR” together with one of the best driving games of the past “OutRun”.

Yes it is indeed over the top and then some, it is extremely polished and most importantly is that this is not just a glorified Arcade machine as this thing is actually a driving simulator which use location-based technology and to see this thing with a next-gen game is the closest thing you can get the real deal for sure.

By the sound of things is that there is support for several driving games already (both Arcade and Sims) and it even supports aircraft simulations and games too.

Also, Consoles (PS3,4, Xb360 etc) is supported,  but i have yet to find any proper data on someone testing this together with VR kit like Morpheus etc.

Will this be the new standard in gaming for the next generation? who knows? interesting times ahead for sure.

And here is a video of the game Assetto Corsa and while i love OutRun i have to admit that i would love to try this one too.

Amazing is it not?, well it can be yours if you really want it but it will cost you $55.000, yes that was the price of the last one on eBay and for the record, this is also the same price range as a used Ferrari Testarossa … 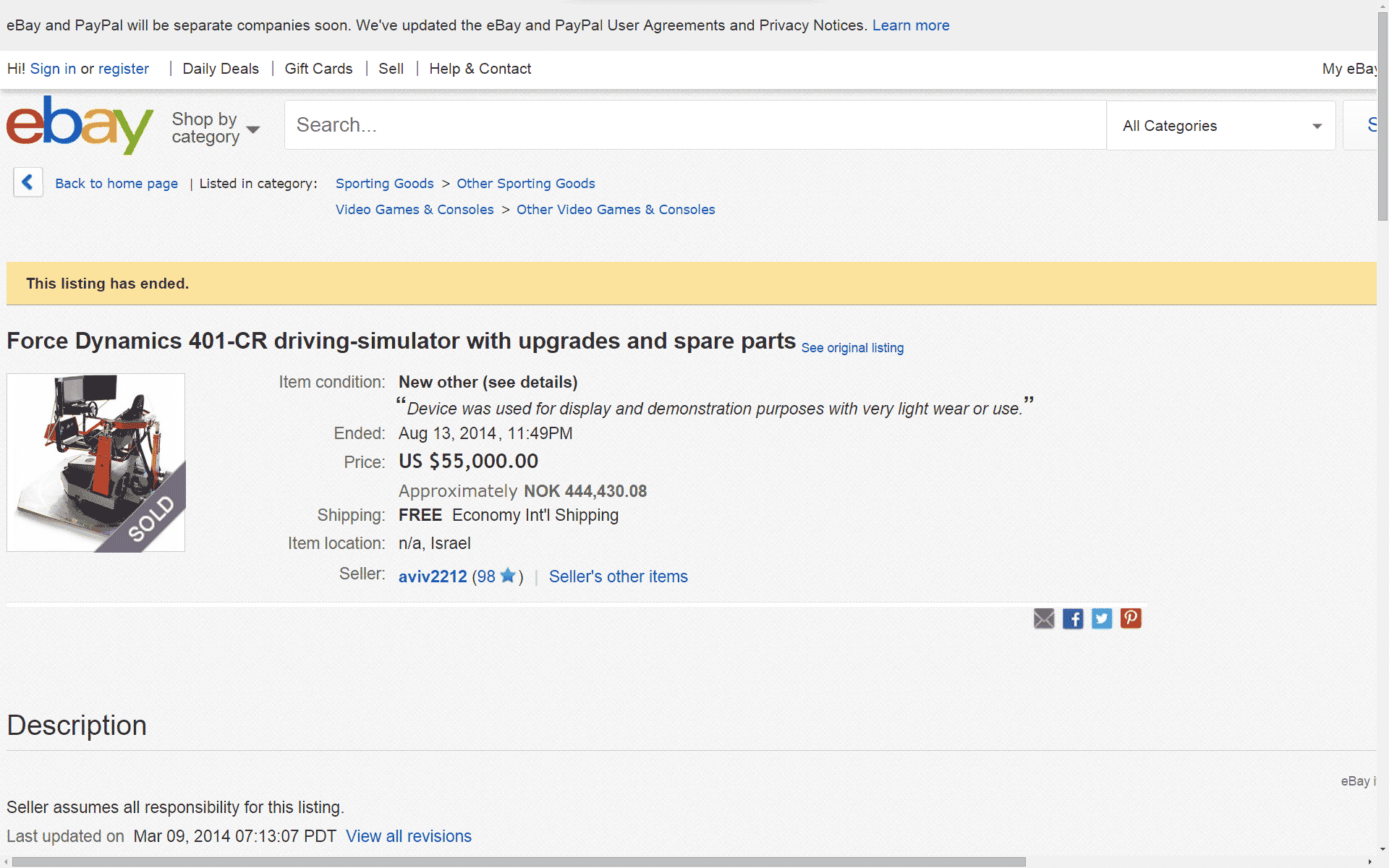 That price tag is steep and one has to wonder if it is really worth it, is that price including a service agreement plan? what kind of guarantee is it on this thing and its parts?

Many things to consider here like what happens when something collapses while moving. Why is the screen of such “low” picture quality? , do TV/Monitors like to be thrown around like this?  How many “G” is this unit actually pushing at max?…  and so on…

I would love to get one but i will never fork out that kind of money for such a thing for sure so this will just be another one of those things that go into the “What if” shelf.

That said, imagine if one of these babies showed up at some sort of event or theme park, 1-hour waiting times for 1-3 minute in this machine looks like it could be worth it.