The Games We Never Talk About (But Should) (TGWNTABS) is back again and this time we will talk about a rather unknown game.

Vektor Storm by Inova Games is the one I picked for the return of the games that I feel never gets talked about, the series has been the most popular article topic here on the blog since I first started it back in March 2019 with Kid Gloves II.

First of all, a little story about how I found out about this game:

I have always been a Tempest fan and for ages, I felt that the Amiga never had a decent version of the Dave Thurer coin-op classic, Well that was until I saw this game at The Gathering 1994’s big screen for a wee bit, I am still trying to remember why it was shown on the big screen but I guess it was a Jeff Minter/Dave Thurer Tribute thing or even a Tempest one.

Long story short, as soon as I saw it on the big screen I went around and asked if anyone of my swapper friends had the game but no one did as all they spoke of was the then just-released Apocalypse game and that Vektor Storm was an old game.

My search continued at the party premises as I was determined to find the game, boxed or just a pirated version, I eventually met a huge arcade fan (who stood playing Mortal Kombat in the arcade section at TG94) and I told him that I normally play this game with a one-button setup on the Amiga and he then looked at me like if I were insane and replied – WHAT, the Amiga has Mortal Kombat? 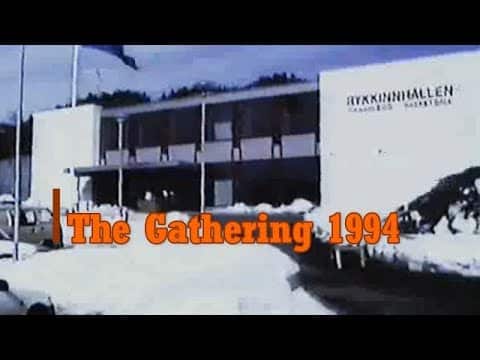 He told me that he had brought his Amiga and C64 with him to the party but he was not all that much into the Amiga games, except for some Arcade conversions but was totally into scene demos and had entries in the Amiga and C64 compos that year.

He then moved tables over to where I sat so we could discuss demos and of course a few games, and yes show him Mortal Kombat for the Amiga.

For reference here, Mortal Kombat came out on the Amiga in February 1994 and TG’94 was in the first week of April which means MK was a relatively new title even for crackers/swappers and such.

I showed him a few games and scene demos I loved, but when I showed him one of my new starfield code examples and high res logo and tunnel Vektor zooms he said, oh! this reminds me of my favorite Amiga game – Vektor Storm.

I then asked in a less enthusiastic way (to not show the huge desperate nerd factor I normally show when I really want something), you got it with you? He replied quickly, Yes of course, and then took it out of his suitcase, a beautiful Amiga box with the name Vektor Storm on it, I struggled to not scream out – CAN I BUY IT FROM YOU?

He then fired up the game and from then on he was my best friend forever, well, he didn’t sell me the game sadly but he let me copy it, and honestly, the only things I remember from TG’94 is the horrible sleeping facilities, the smell of pizza, beer, smelly kids and Apocalypse and yup, Vektor Storm, we must have played it for like 60 hours at the party haha.

We met up many times after TG’94, his name was Tommy (Dexterian), who sadly passed away in 1998 in a car accident and no he never did sell me his copy of  Vektor Storm... 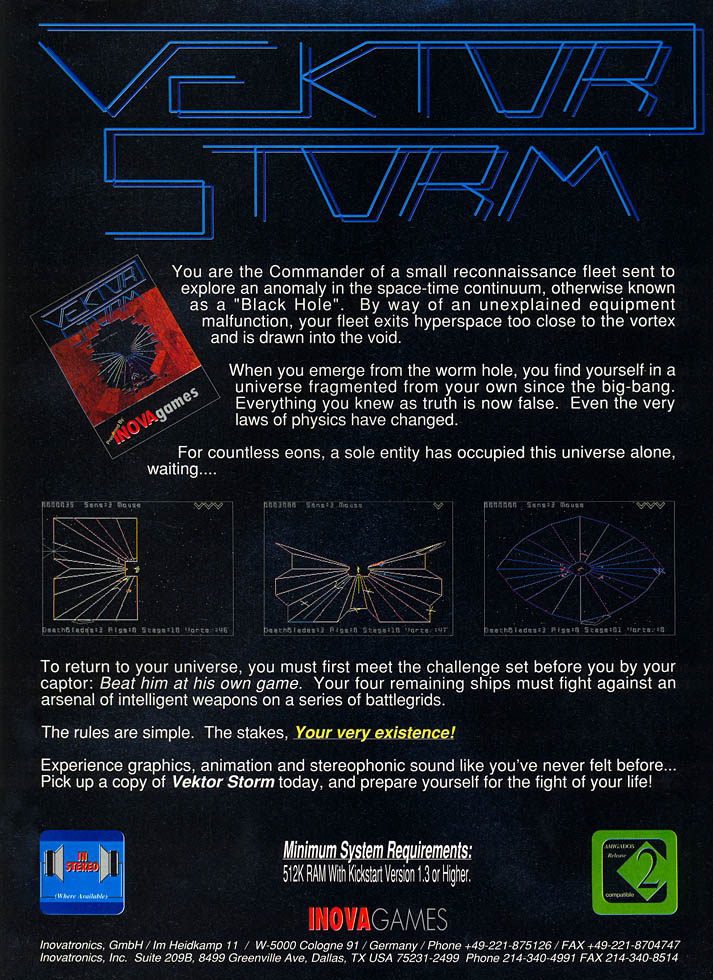 Vektor Storm came out in 1992 and one of the reasons the game is pretty much unknown to most was the price tag of £29.99 (other and much more profiled titles was 19.99 and 25.99) according to Lemon Amiga, I have never seen the game in any shops and I’ve never held one either (other than Tommy’s box), and that annoys me a lot as the game is one of my all-time favorites.

The advert above is another thing I feel that I’ve never seen in a mag either, but there were reviews in a few mags and the game got mediocre reviews and very little recognition.

“To be honest I thought the game was a shareware title with a box release from the developer.”

Vektor Storm got a lot of levels and there are even boss battles, many of them identical to Tempest in terms of what you see but there are enhancements here that ain’t in the original and yes the framerate in Vektor Storm is really good, heck I’d say it is better than the Arcade.

The controls, weapons, and general feel of the game are very good and while it does get hard quick it is never impossible, I have read elsewhere (Lemon, EAB, etc) that there are framerate issues where you get frame skipping every now and then, to be honest, I have never felt that but then again I’ve never analyzed the framerate either and if there are problems this might have been that I had an A1200/030 when I first discovered this game and to be honest I have never played the game on anything lower than an 030 CPU with minimum 4MB Ram. 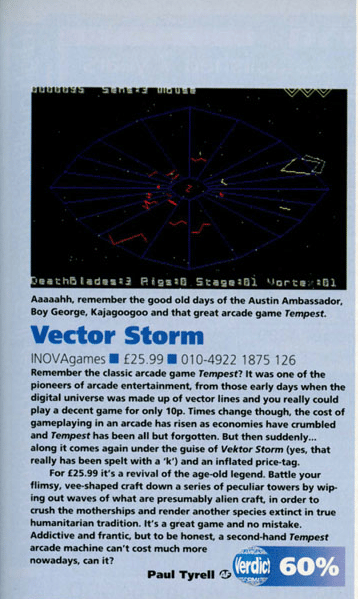 Oddly enough there are only like two games on Amiga that are as fluid as this one, No Second Prize and Vektor Storm which is quite strange as the technology was there for sure (just look at F/A Interceptor and Robocop 3 as examples of an evolving tech, the Demo-scene had loads of impressive Vector demos at from 88 to 94.

A better CPU certainly helped and this is one of the reasons why the PC/-*MS-DOS platform got way more advanced Vektor games early on, huge CPU and Memory setups had no problem doing awesome flight sims already in 1990 while Amiga was stuck in the 68000 era with 512kb as its main target audience, crazy to say it nicely and while it helped a lot when 1200 came out it was still too slow due to it had no Fast Ram by default which meant that the true potential of the hardware was hard to support for most companies due to a very limited number of users had upgraded to HDD and Fast Ram early on. We saw more advanced games (and ideas) for the AGA platform but it never took off as most companies left the Amiga as soon as sales declined and as Commodore folded the final nail in the coffin was made as then just about every huge developer turned away after projects were finished.

Luckily we had a few impressive games over the final years, TFX and Tornado were games I loved to bits even if they had “issues” and was much better on other platforms.

The reviews for Vektor Storm were really unfair if you ask me, the reviews I have found online rate it as 60 out of 100% and most reviews seems like the reviewer just rushed the write-ups to move onto another game, this is very sad as this game is simply just too good to be ignored for people that love the arcade.

” It’s a great game and no mistake. Addictive and frantic, but to be honest, a second-hand tempest arcade machine can’t cost much more nowadays, can it?”

No idea who proofread that text but you get the point and it clearly says it is a good game, look at other rubbish games the same year that cost way more but still got more than a 60% rating, or heck look at the horrible and almost unplayable American Gladiators that cost 19.99 and got an 80% rating the very same year… WTF? 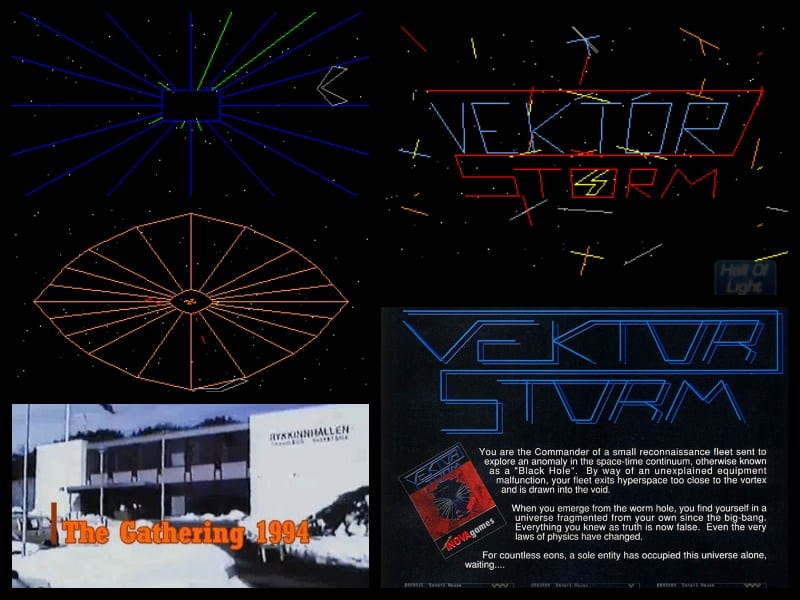 It is no secret that this game is one of my most wanted titles ever and that I am rather desperate to have it in my collection but this post will most likely push the prices up a lot, with that said, what is there to bump if no one ever put one up for sale, to begin with. Fantastic game and I give a shit about what it cost back then, a good game is good even if it has a hefty price tag, heck at the same time people bought god damned Nintendo games for 4 times the price. A true gem and I am very happy that they showed it on the big screen at TG’94 so I could start hunting it down and play it so much that I still remember the game and levels almost 30 years later!

Thanks to LemonAmiga, Hall Of Light, and Amiga Magazine Rack for much-needed info (plus screens from Youtube and adverts, etc) as to why the game had such a stealthy release compared to other titles the same year.

5 thoughts on “The Games We Never Talk About: Vektor Storm”