I am Emilia, daughter of Augusto Vittorini, who founded the Industria Torinese Automobili (ITA) with his brother Tullio. Dad is abroad trying to raise funds, but something went wrong and Uncle came back slamming the door. I have to find out what happened and how I can help my family. Wish me luck!

With words like these, a few years ago, Davide Bucci started his trilogy of text adventures about a young and very independent Italian woman bound to success thanks to her strong character, charisma, and will to explore and overcome even the most difficult and unusual situations. Similar to an ante litteram Lara Croft, Emilia will travel around the world to help his family and friends uncover dark secrets and secure criminals to justice.

I’ve always been a fan of Interactive Fiction, but this time I was actually put in the right direction by ToAks who, on these very pages, reviewed the Amiga version of Davide’s second game, The Queen’s Footsteps (article here). Like many IF developers today (Stefan Vogt and Hugo Labrande, just to name two), Davide compiled his games not only for the Amiga but also for most 8 and 16-bit architectures out there. Thank to him, I finally had the chance to play games on my C128 in 80 column version, a thing that I wanted to do since I bought it in 1986.

Blogging about text adventures is always difficult since there are no awesome in-game graphics to show, and publishing screenshots can either be boring to most or inadvertently disclose plots and solutions that should be discovered by the player only. Instead, I decided to cover the entire trilogy in a “narrative way” in order to give you useful information without spoiling the fun.

So, after taking care of the “race businnes”, at the end of 1903 I joined the Italian Archeological Expedition in Egypt led by Ernesto Schiaparelli, the director of the Egyptian Museum of Turin. Nine months after, I came back to Turin via Genova, Italy. My steam ferry arrived in town three days earlier than the cargo that was holding 25 wooden boxes containing Queen Nefertari Meritmut’s grave goods, a real treasure! Upon arrival, I caught a train back to Turin and, once onboard, I got invited to a sumptuous reception organized by a wealthy art lover, Eugenio Collovati, count of Raligotto. Discovering that part of the treasure was stolen put me on a hot trail that made me explore the city of Turin and discover its secrets.

Three years after those events, on April 19, 1907, I spent some time in Varenna, a nice little town on the shore of the beautiful Lake Como. I was hosted at the magnificent Villa Briccorosso; Princess Lucilla Briccorosso was preparing for the Silk Road Race, a 10,000km rally raid between Cairo in Egypt and Peking in China, to be done by car. Once again, I represented ITA, founded by my father, the company that built the car the Princess just bought to use during the rally. The car was supposed to be delivered that very day, but things never went as planned.

The entire trilogy takes place, for the most part, inside Italian cities and villages of the past century, a very unusual thing for these kinds of games. Also, they are actually soaked with steampunk references that are even more unusual. Besides being good games on their own, these are some of the reasons why, in my humble opinion, people should play them, since they are evocative and full of intelligent humor, as you can see in the following picture. 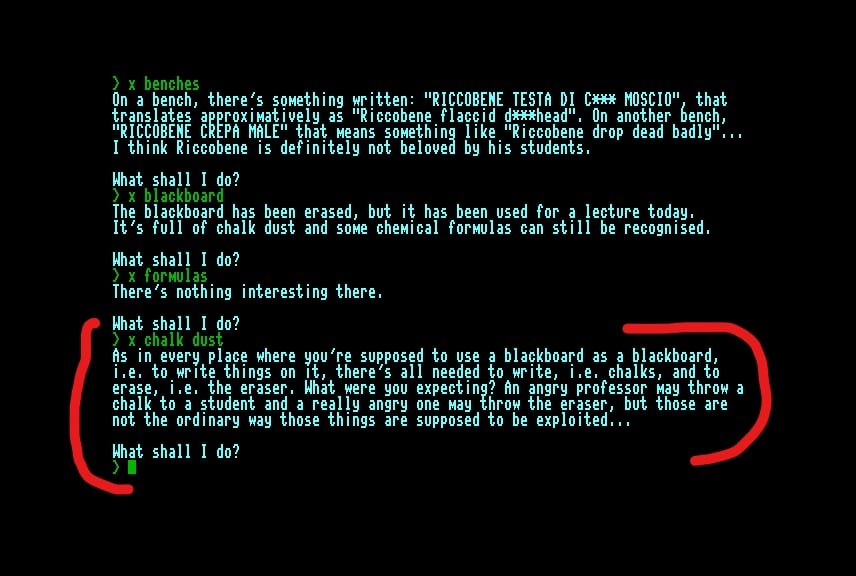 As said, these games are available for many different platforms, even those with less than 32KB of RAM (except the VIC-20, which will need a proper expansion if played on the original hardware). To achieve this result Davide split each of his games into three parts, and access to the single parts is available once you complete the previous section of the game and a password is given. Also, from a technical point of view, he coded his adventures using the AWS engine (Adventure Writing System) and then tweaked the results to adapt them on the machines he liked. As an example, the C64 version was obtained by writing a custom “aws2c” converter and by compiling the resulting code with Cc65. The MS-DOS version was obtained by using the Borland Turbo C++ and tested on DOSbox.

1 thought on “My Name Is Emilia Vittorini”