I have once again decided to bring back another old and forgotten game that never got the love it deserved back in the day, oh and I have decided to turn this into an actual thing here at the blog now, the name of the series will be – The games we never talk about.. (But should?)

Kid Gloves II: The Journey Back was originally called Little Beau but the publisher (Digital Magic Software) went bankrupt just before the game was supposed to launch, luckily Millenium (Interactive) took notice of the project and decided to rescue it.

A few things changed after Millenium took over the project but the most notable one was the name change, Kid Gloves was one of the games Millenium had banked a lot on earlier and for some obscure reason they decided to brand Little Beau as a sequel to that and this is most likely why no one ever talks about Kid Gloves II and even more so why there is no graphical nor gameplay connection between the two Kid Gloves games what so ever.

Trivia: Ever heard of a band called RUSH? (Hello Stewart Gilray :p) Well, they did a song called Kid Gloves and one has to wonder if Millenium (or the original coder for that matter) picked the name for the first game based on this…

Kid Gloves II was released for the Amiga and Atari ST in 1992, the Commodore 64 version was never mentioned again after Millenium took over the project and strangely enough there seem to be very little information about the C64 version around the internet today (except for this AGTW article), the reason why I mention it now though is that I remember the previews from old magazines and how they made it sound like this might become the best platformer ever to grace that machine.

Those old previews and dev talks certainly sparked my attention and I decided early on to follow the game and the developers (Dave Semmens & Doug Townsley) closely.

When it finally launched there was next to no hype from the media and the reception was lukewarm and reviews ended up in the “it’s ok” and “could have been better” range and I felt that they didn’t give the game a chance and that most (if not all of them) didn’t even play it beyond the first level.

There are a couple of things with Kid Gloves II that has to be mentioned before you lose interest in this article and skip to the next one, jokes aside I’d like to continue with a few things I like in this game like how it’s built up, yes your mission is to save a pretty girl locked away in a castle and to get there you will have to travel high and low around the six gigantic levels (they are maybe too big actually?) and there are some nice mini-games hidden away in the levels so that you won’t get too bored of the usual platforming style.

The mini-games are actually some vending and arcade machines that you find on your way, some better hidden than others and they are actually pretty good fun, one of them is a rather decent horizontal shoot ’em up game and the other one a slot machine which got some pretty good prizes that will make your journey easier (if you get lucky that is).

One of the worst things with Kid Gloves II is the difficulty level really as if you play it wrong then it will end up being way too hard and frustrating, it will take a while to figure out how to get (and use) the shield and upgrades/power-ups.

Your little hero got a health bar but it’s too small really and the first few times you might even die without figuring out why. An example early on is where you jump too high and hit a spike with your head might end in dying before you realize what just happened.

Bad collision detection or just bad mechanics? I’d say a bit of both but once you have played the game a bit this won’t be much of a problem afterwards.

Sadly there are a few more bad things about Kid Gloves II and one of them is that there’s an in-game timer there just to piss you off, it will make you rush it more than you should and therefore making the game harder than it needs to be as you will make all those typical badly timed jumps and so on.

Another thing is that your main weapon is one of those “hold the button longer to swing it with more power” type of things, it just doesn’t work as good as it should and in most places it will just be annoying.

I decided to include a gameplay video, there ain’t many videos out there which shows the popularity for this game sadly but the one included shows at least a little bit of the (first two ) levels in the game.  The quality is a bit off but you get to see and hear the cutesy graphics and soundtrack.

I always fancied the graphics in this game as it tried to be familiar yet different and there wasn’t really enough of these games on the Amiga (in my opinion anyway), most console owners of the time had like tons of these type of games at the time but things changed for the next 12 months with brilliant games like Addams Family,BC Kid, Alfred The Chicken, Yo Joe and so on for the Amiga. 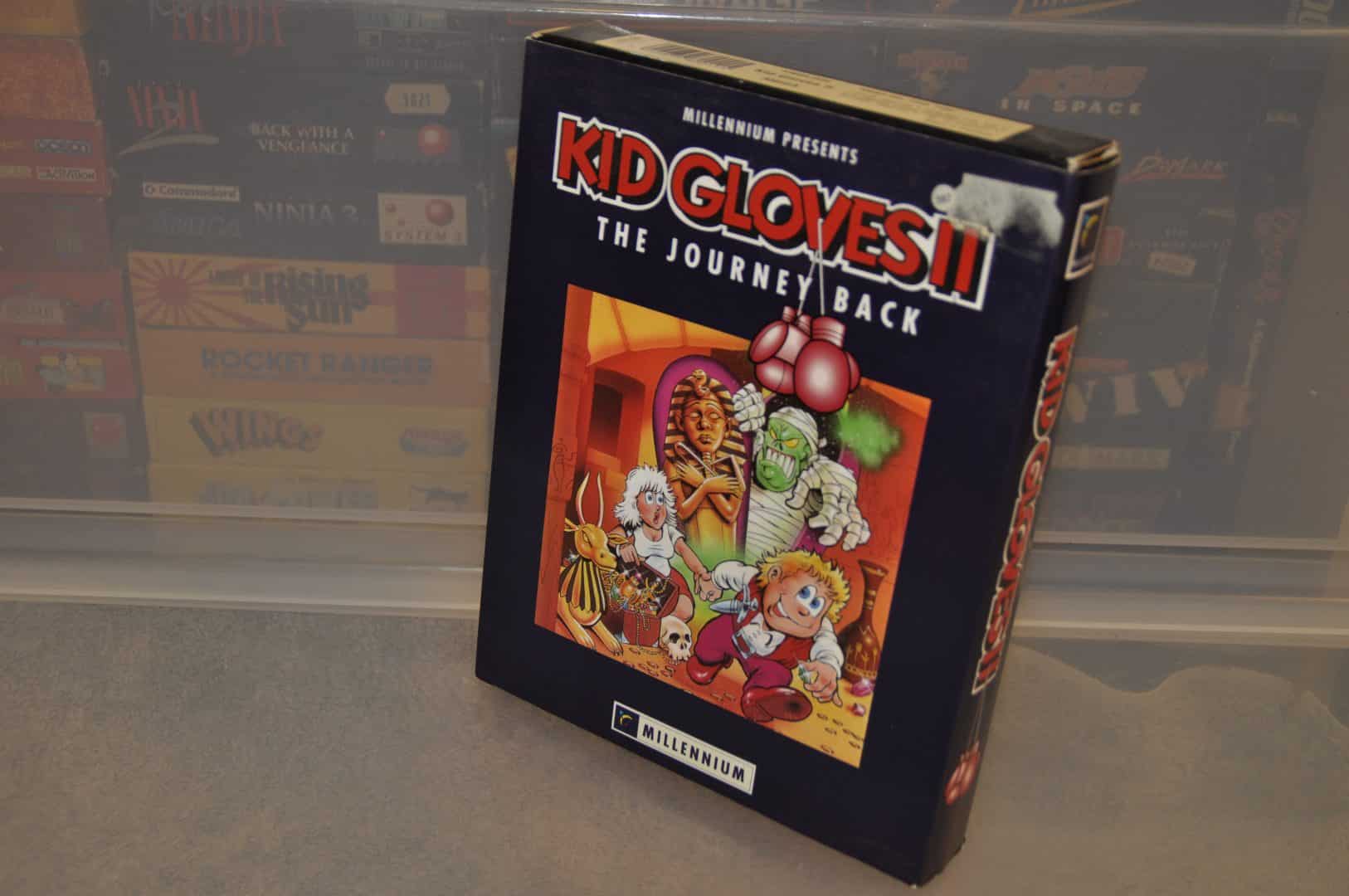 Very cute box and it fits with the era it came out in, a mix of the 80s and early 90s really but one has to wonder if the name did it any favours. 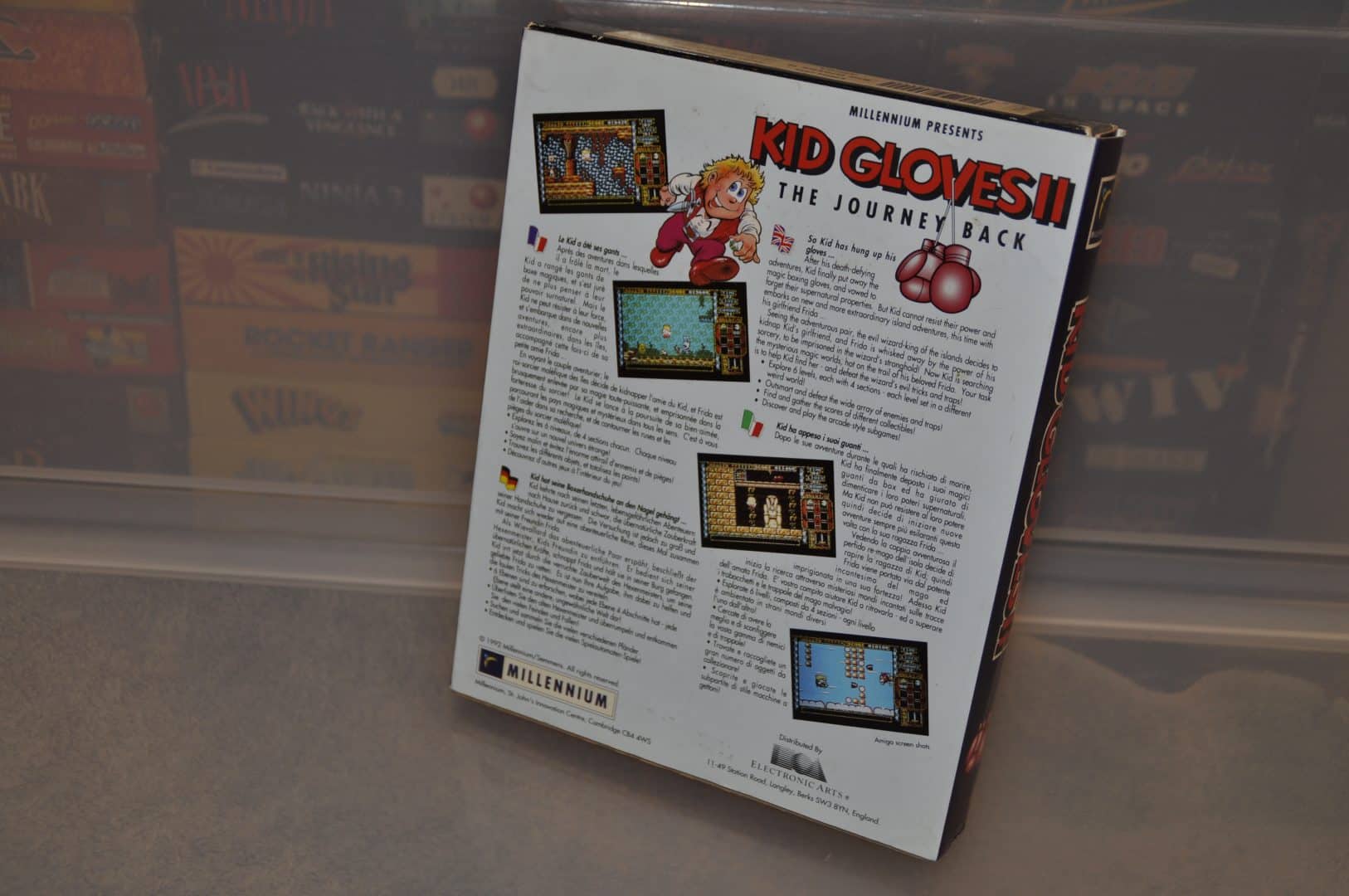 ELECTRONIC ARTS on a Millenium box?  Seems they had the distribution rights in some territories.

Pretty standard fare but there is a lot of information in it compared to other platformer games of the same era. 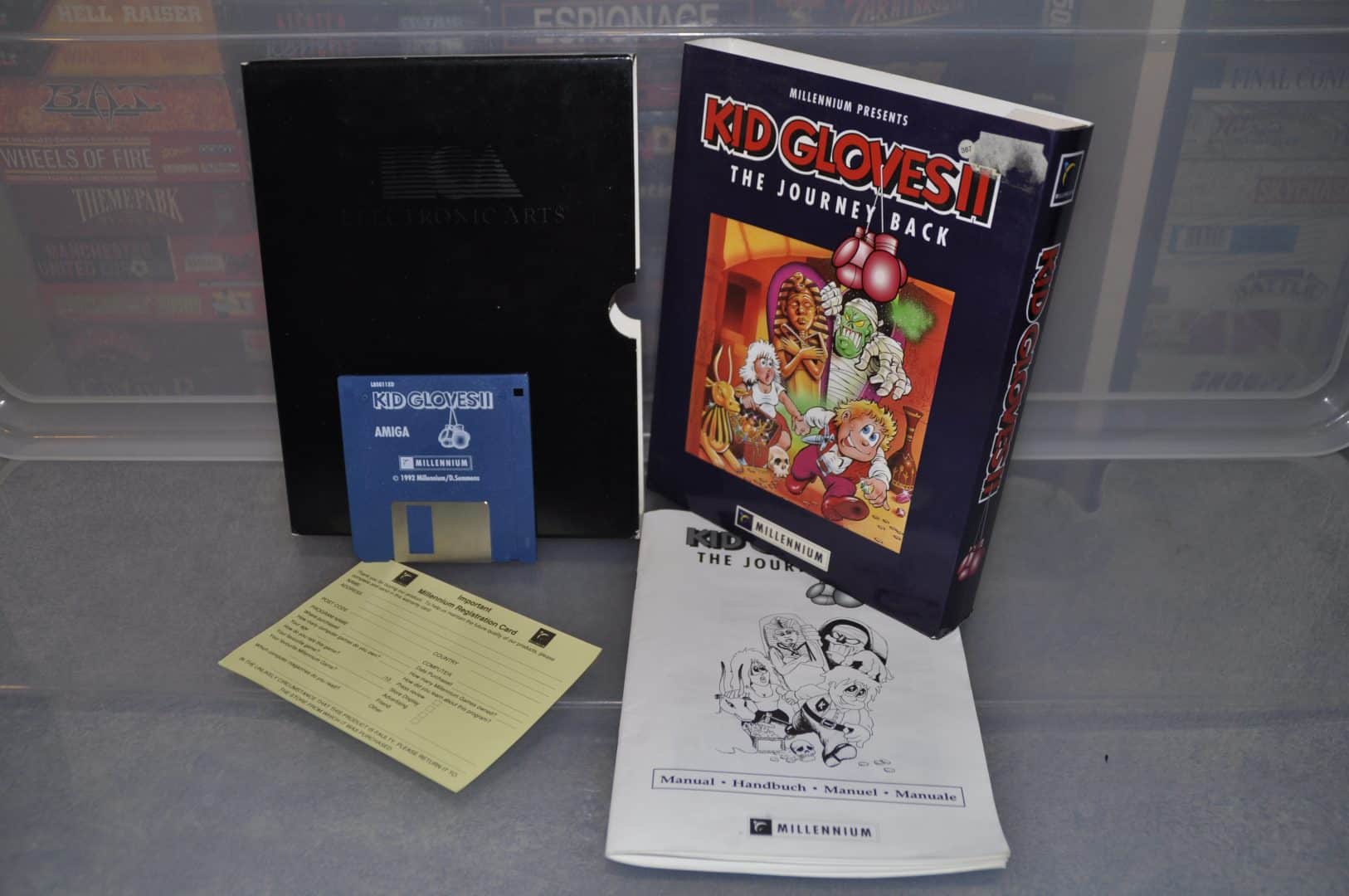 Kid Gloves II: The Journey Back could have been a proper winner for sure but it came out a little too late for some and it had a few annoying flaws and some strange design choices that made the game a little too difficult for the player/age group it was targetted at. The cute sound/style combo bundled with its general mechanics works great once you get used to it and well worth your time. The game is huge and varied with a level design that is more in the line/style of games like “Super Wonderboy In Monsterland” than your traditional platformer which means that this might not be one for everyone sadly. 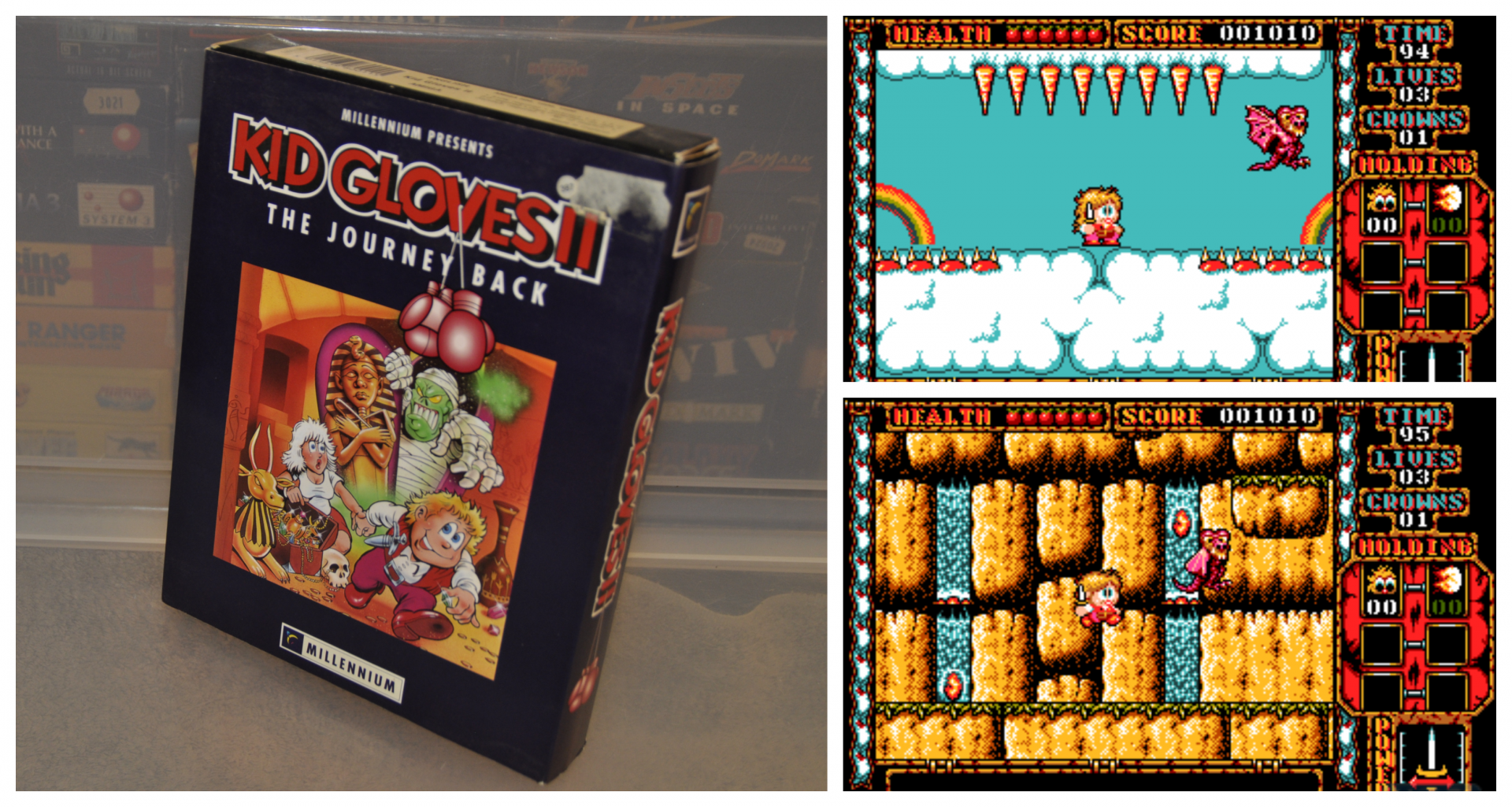 Where are they now?

So, what happened after Kid Gloves II then? Well, Dave Semmens went on to work on many good games really and most here might know his Amiga port of The Lion King and others might remember him from his Acclaim or Psygnosis era where he was involved in games like Colony Wars and Retro Force etc. Dave ain’t working in the Gaming industry anymore sadly.

Doug Townsley worked with Dave Semmens on several projects before & after Kid Gloves II but he eventually joined Climax and have been involved in a lot of projects including the just-released (2019) Xbox One game Crackdown 3.

4 thoughts on “The Games We Never Talk About: Kid Gloves II – The Journey Back”