The Games We Never Talk About (But Should) (TGWNTABS) is finally back again here on the blog and this time around it is to talk about a game series that is actually still running today and as crazy as it might sound all 3 releases since 2009 till now (11 years)never ever popped up on my radar.

The Developer Exor Studios certainly has milked the game for a while now but then again if it had not been for that then I would never have seen the game in the first place and yes to top it all off they even GAVE the game to me for FREE* many moons ago with the Playstation+ monthly PS3 games subscription scheme (October 2013) and that ownership even transferred over to the new version released on PS4 last year. 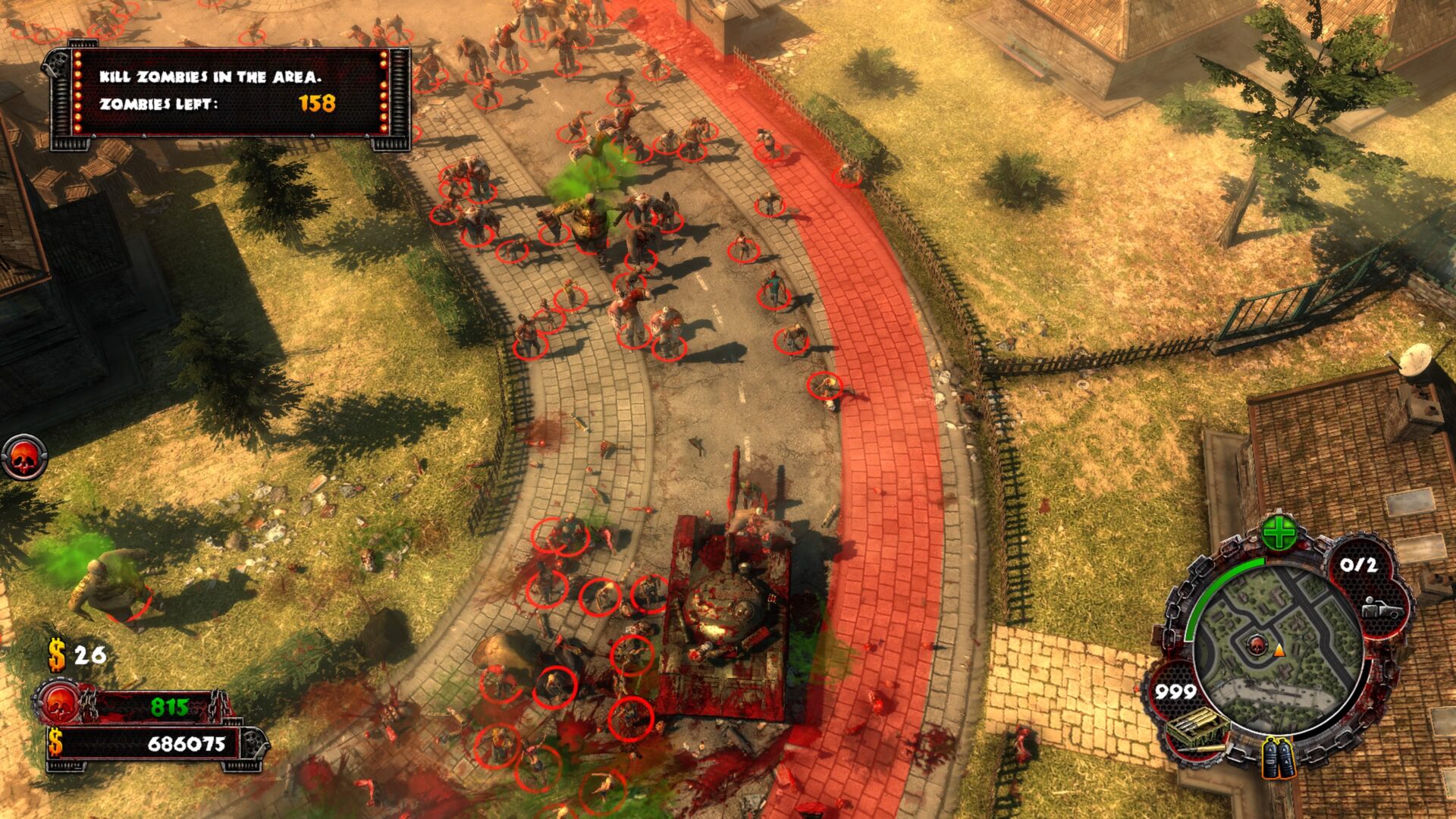 Zombie Driver is a very typical old school type of game with some very strange mechanics and so on, the base of the game is an overhead drive em up, a type of game like we saw so many of back in the Amiga and PS1 era and luckily it ain’t an open world or whatever but there is a rather huge map towards the end where you get a single main mission and a side mission for each level.

There are 31 levels in total and while most of them are all about killing Zombies with various weapons and upgrades as well as vehicle types there are also missions where you have to tread a bit more carefully too, the amount of action going on are almost over the top from the very first second but just when you thought there won’t be room for more enemies then it just gets 10 times worse, seriously the amount of stuff going on at times is totally bonkers.

There is a story in the game but to be perfectly honest I found it totally unnecessary and somewhat “in the way” of the actual game flow and dragged the immersion down a bit by adding a pause to a somewhat other chaotic and brilliant experience.

Some of the story missions are themed like you have to rescue a police station in order to retrieve a police car that you have to use in a later mission and so on but the bad thing is that the story boxes and voice-overs just feel overdone for most of the time so you end up ignoring what’s going on and just want to press on and kill more Zombies! (which you can’t as you have to wait while the shit is going on).

The missions can be timed or they can have a certain target that can get lost or die as well as general “kill X” or pick up a car etc but all in all the missions are short and won’t take too much time to do although some are harder than others and yes there are times that you will beg for mercy for sure but yes there is always a way and in this game that is a weapon and car upgrades. 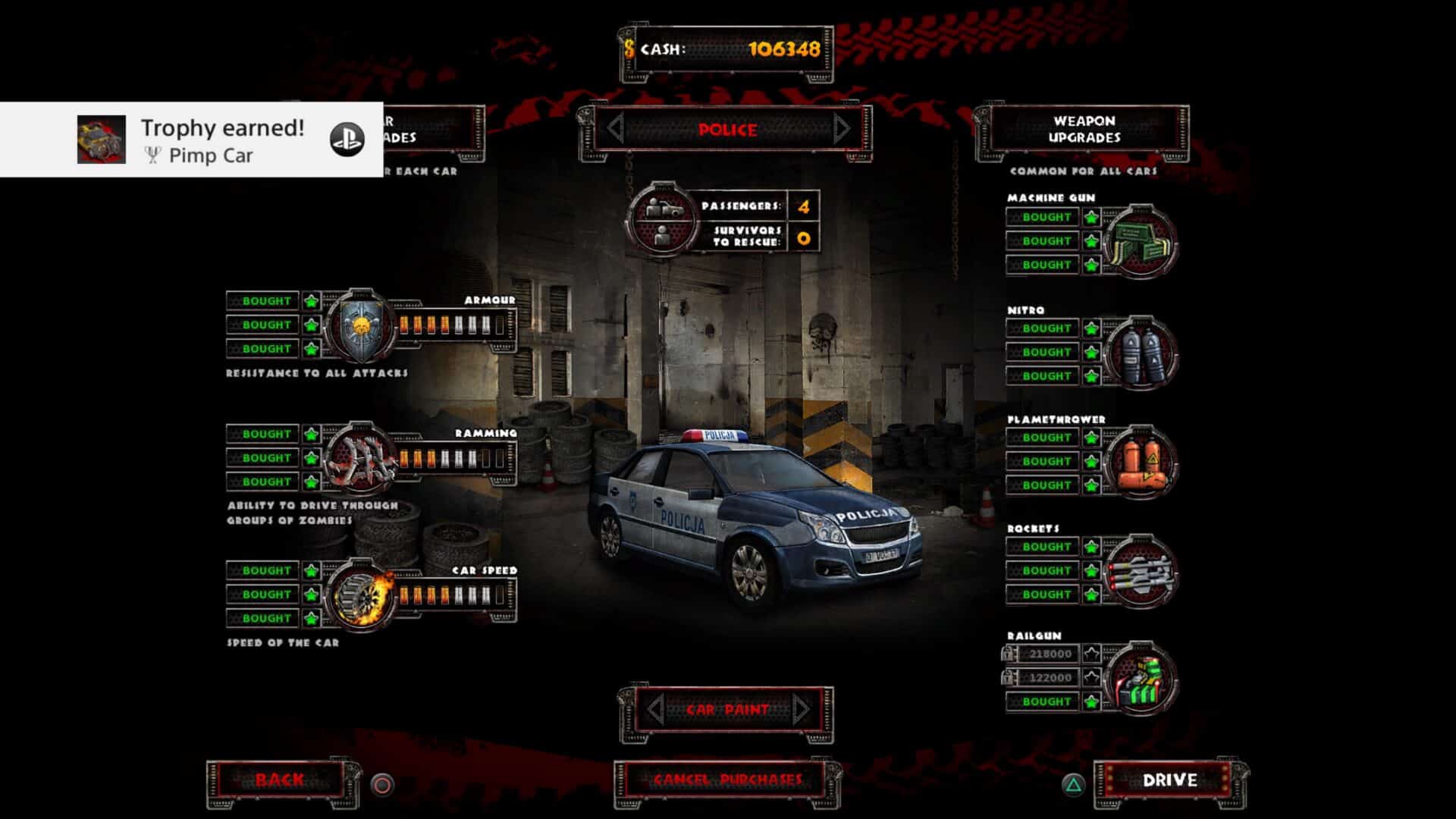 The weapon and car upgrades won’t disappear when and if you die but some of them are only obtainable by doing certain missions (like side missions) and yes you will have to grind your way up to the best upgrades by replaying missions or whatever. You will only need to upgrade weapons once as they carry over to every car in the game (even if you unlock them later on) but armour, speed and ramming upgrades have to be done to every car individually.

The car handling and general playability of the game are quite good but also a bit of a struggle as you just have to decide what kind of vehicle suits your driving the best, small sports cars handle like an untamed lion but a big lorry can be way too slow for you and I found myself using a bus a lot on the rescue missions as that had pretty good armour and could hold a lot of passengers at the same time which meant I could drive slower and more tactical and pick up all passengers in one single trip instead of driving back and forth all the time. 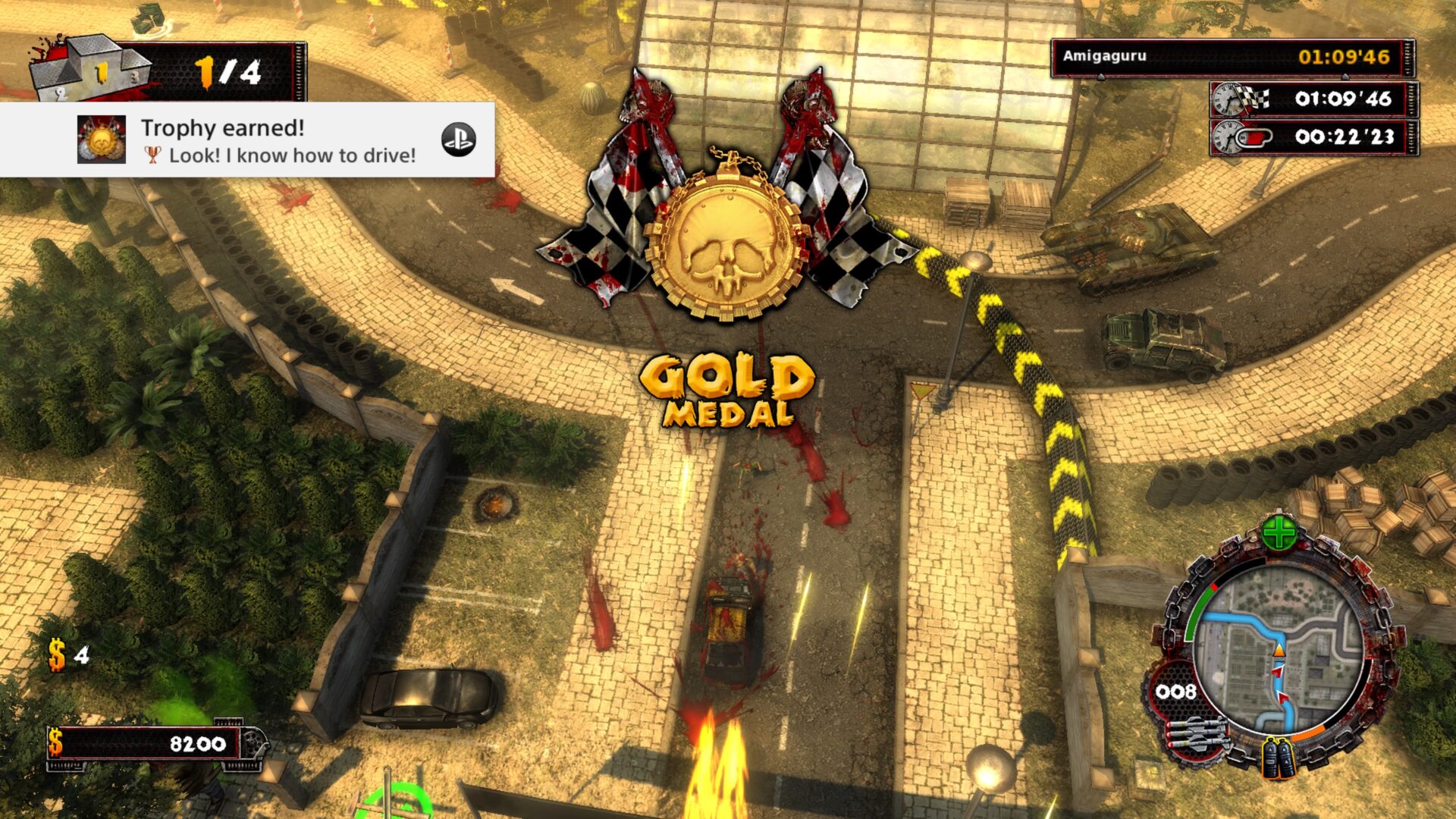 I mostly want to recommend the game based on my experience from the campaign part of the game but yes there are two more modes in the game that will make the game last a bit longer too, neither Blood Race nor Slaughter mode is bad or boring to play but it is a bit more of the same.

The Blood Race is basically Micro Machines with a twist where you get various types of missions like Racing, Endurance and Eliminator and there are ways to get money and so on at the same time like by killing Zombies in the road and so on.

The money and upgrades from the Campaign mode do not carry over to the Blood Races nor the Slaughter arenas which means that you will have to play the game quite a bit here too if you want your cars to be souped up.

That said, the Slaughter mode always starts on ZERO weapon upgrades and the longer you live the better the upgrades you find on the map.

The final verdict for this game is a bit hard to set as yes I needed a new game at the time I found this one and I just love retro-inspired games and yes one of the best things to me is the top-down racing genre like this game got, it is crazy that I’ve had this game for 8 years now without even trying it but it all boils down to the fact that when this game came out i got led to believe it was a totally different game, to begin with, and I never expected it to be of this quality. I have had brilliant fun with Zombie Driver HD (PS3) and it has so far taken me over 50 hours on my road to a platinum trophy ( I am very close now) and yes I will do the same all over again with the PlayStation 4 version right after as this is how good the game is. No, this is not a AAA title but who said a good game had to be that.

2 thoughts on “The Games We Never Talk About: Zombie Driver/HD/Immortal Edition”