I blogged twice about Tales Of Gorluth back in 2014 and I promised to do another article about it too and needless to say that I did not forget it but I just never got around to playing the game enough to really write something informative and decent about it.

Amiworx is the developer of these games and their fourth(!) game (Tales Of Gorluth III) in the series is due out later this year, but more about that later.

So, let’s start with the first title then…

Tales Of Gorluth was released back in 2014 and sort of took me by surprise with a somewhat rather stealthy release, there were a few reasons to why not many talked about it but I’d go as far as saying that all the “it’s made in Backbone so it sucks” comments were uncalled for and the product is much more than just a Backbone game.

So, this is probably where some of you will go… uh? what is this Backbone thing and why is it so hated?

Well, Backbone is a pretty easy and decent game creation tool to work with but also very outdated and system resource heavy unoptimized pile of crap which means that simple games end up being slow and memory hungry for no reason whatsoever (to the end user).

Amiworx managed to do several things right even with Tales Of Gorluth thanks to focusing on two important factors, gameplay and picking a type of game style that the Amiga needed badly.

Yes, as you can see in the video it is a bit like the old Zelda games, an overview RPG adventure type of game with simplistic fighting mechanics (with some brilliant music too btw).

Tales Of Gorluth plays great and while it does have its problems they are more because it was their first game than actually a bad game or even because of it being a Backbone game.

Tales Of Gorluth II was more of the same but it also introduced new features and better quests lines which made it into a rather sweet update on the first game, but in the end, it didn’t really seem like a new full-blown game to the community and therefore most likely ended up as a bit of a ” Was it a new game or an update?” thing.

The excellent music quality from the first game is also in the sequel but now there are also better graphics and more to do in general, Amiworx released a trailer on release which shows the potential of the game and yes, it also contains really good music too, so be sure to watch it right now! …

If the trailer didn’t hype you up then maybe these in-game screenshots might help, I never complained about the graphics in the first game but yes the whole game felt pretty much as if it was just the same graphics throughout the whole game.

The new graphics are not only better but also much more varied than the first game and it also shows that there has been more than one artist involved.

After Tales Of Gorluth II,  Amiworx decided to try something new with Backbone and that was to create a side-scrolling action adventure game instead …

Which brings me to a game released late last year:

Heroes Of Gorluth is first and foremost the most ambitious Backbone game I have yet to see, the quality music from the Tales games are also present in this new game but not only that as it feels like if it’s the same games only in a different view angle.

This is the first game in the series that supports the CD32, the game runs ok enough on it which is quite nice when you compare the system requirements for all 3 games so far, Amiworx has most likely found a way to make them Backbone games less demanding in both memory requirements and raw power.

I decided to include another “Longplay video” to show how it plays, as you can see in the video is that the game does not move silky-smooth and there are also some precision problems as well as a very mixed game design style.

I really want to like Heroes Of Gorluth but the game is littered with game mechanic flaws and way too much guessing on what to do next instead of just following goals or such.

If someone had seen my first time playing the first room in the demo then they would have understood why I am a bit negative to this game, I mean, I literally had no clue or idea how to get out of the first bloody room really.

The thing with problems and mechanics like this is that it adds frustration as well as a “is it broken/did it bug out on me?” kind of situation which then leads to most people just switching the game off, most likely anyway.

Other issues are that the graphics can often be hard to “read”, I mean, it is not always clear if you can stand on some of it, or maybe it is a door that you can open but there is no way to tell if it can be opened or not, everything ends up being a guessing game sadly.

This is sad as there is so much more to this game than some broken game mechanics and puzzles and as Per shows in the Longplay video above, the game does get better and better throughout the game and there is actually not all that much of “where do I go next or what do I do now then?” after the first few locations either.

Amiworx tried really hard to make the best 2d side scrolling game possible in Backbone here for sure with Heroes Of Gorluth, it shows how much time and effort they put into it and the good stuff with the game really works good and the music is (as always) awesome, but the bad stuff breaks the fun and made it really annoying to play sadly. I am 100% confident in one thing and that is that these guys would have made a much better if they had a game coder who knew some of the better tools out there. The effort gone into the game is beyond expectations really, a bunch of adjustments to the gameplay would have made it a much better game for sure but not without getting rid of Backbone i fear.

And this brings me to the last game in the series…

Tales Of Gorluth III is out this year and it is already looking like a really good upgrade from the 3 older games, check it out right now, the trailer is really good and a good motivator to support them.

You really shouldn’t miss out on these games if you are into adventure and puzzle games and by the looks of things they saved the best for last, I know I will support them both by getting the game and by writing about it. 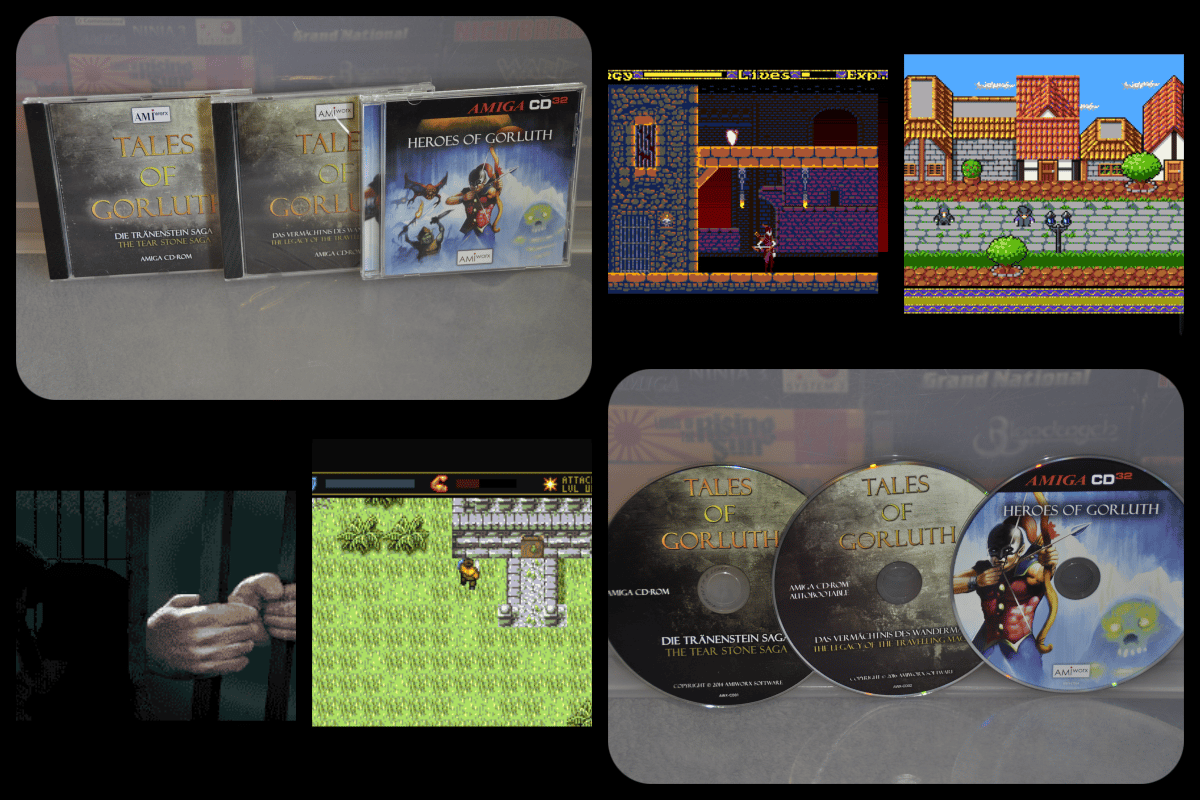 This article is not really a review or anything but more of a hype article towards the next game and one that I should have done ages ago, Amiworx have tried their best and the progress seen over the last few years have been good although there are still flaws and such in their games it is clear as daylight that these guys really love what they do. I really enjoyed the two first games but Heroes drags the score down a bit as I got way too angry (for the wrong reasons) while playing that game.  The overall score might not be as high as some people expected it to be but keep in mind that these games ain’t for everyone.

The last 2 games as well as a pre-order for TOGIII is available at their online shop.

2 thoughts on “The Gorluth Games So Far – Zelda On The Amiga?”