I’ll start this review by going back, way back to the year 1995… The Amiga market was drying up and there was a trend of upcoming projects just vanishing from the lists in magazines, on newsgroups and so on which brings me to …

A game by Halibut, yup that was the original team name of Nivrig games and the game was Turbo Tomato and the reason why I remember it so fondly is that this was at one point destined to be published by none other than the none other all-mighty PSYGNOSIS.

Then it all went quiet for a few years and APC-TCP was set up for publisher but again it went quiet but this time not for years but decades, over 2 decades to be precise as Nivrig all of a sudden chose to show up at the Amiga Ireland show in January 2020 and tease us with his old 1997 build of Turbo Tomato there and that ultimately left him with the impression that a bunch of people wanted this game to get finished.

It didn’t take long before there were rumour murmurs about Turbo Tomato being resurrected and when I heard it directly from TDK that he was working on it and that both he and Nivrig was back on Amiga, well, I just had to try and see if I could help the project in one way or another.

It all eventually led to me helping the project with QA and it has been a joy to work on it, a really good team and the game has turned into something really unique on the Amiga, not a single game on the Amiga like it (that I know of anyway).

Long gone are the Psygnosis and APC/TCP logos or hints as the publishing rights went to the quickly growing Bitmap Soft that I have mentioned a few times before here on the blog. 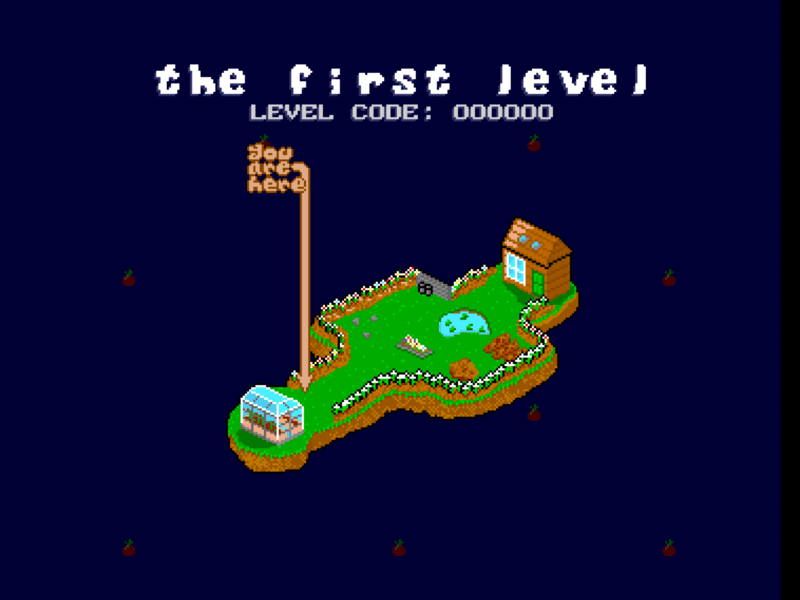 What the hell is a Turbo Tomato anyway?

Nivrig’s own description went like this (back in the day):

Turbo Tomato kicks off from the start with a really good startup picture (which is also the retail big-box image) by Stoo Cambridge (yes that old geezer that worked at Sensible Software and did the amazing Cannon Fodder and Sensible World Of Soccer gfx).

This image is accompanied by an excellent music score by Mark Knight (TDK) that you probably know from huge classics like Captive 2:Liberation / Wing Commander and many more as well as being in the demoscene group Melon Dezign of course. 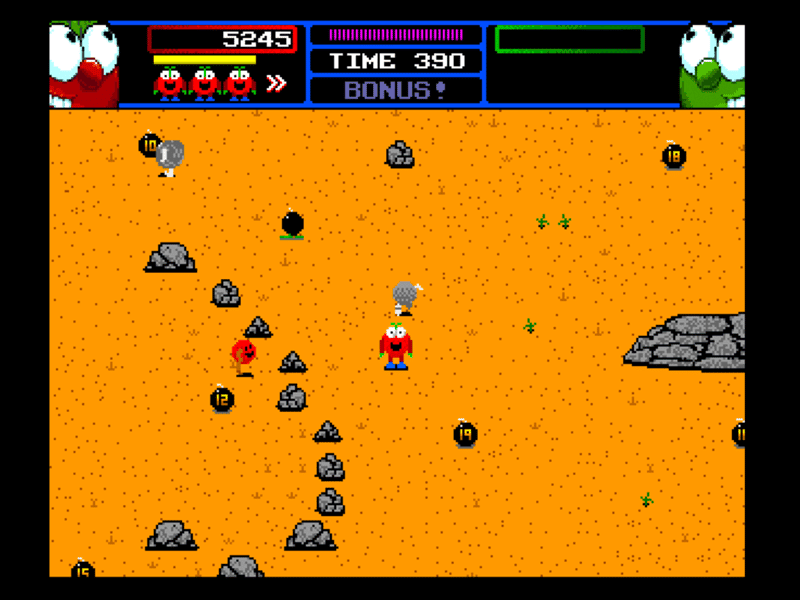 TDK supplied several songs for Turbo Tomato and they all lift an already excellent game to new heights which brings me to the actual gameplay graphics and style.

John and Adam Girvin did most of the in-game graphics back in the 90s but to my knowledge, John did the finishing touches this year (without Adam) although the very talented Kevin Saunders and Chris McAuley helped with making this game look like it was originally intended to do and at the same time fresh.

Yes, the game might look a bit primitive at first but once you start playing it and give it a chance that is when you will realize the insane amount of charm and humour there is to be found in it bundled with awesome turbo speed gameplay mayhem.

The game is such mayhem that I had to take a break from it for a few days (several times throughout the whole project) as my hand simply swelled up, muscle pain due to excessive Zipstick use and so on 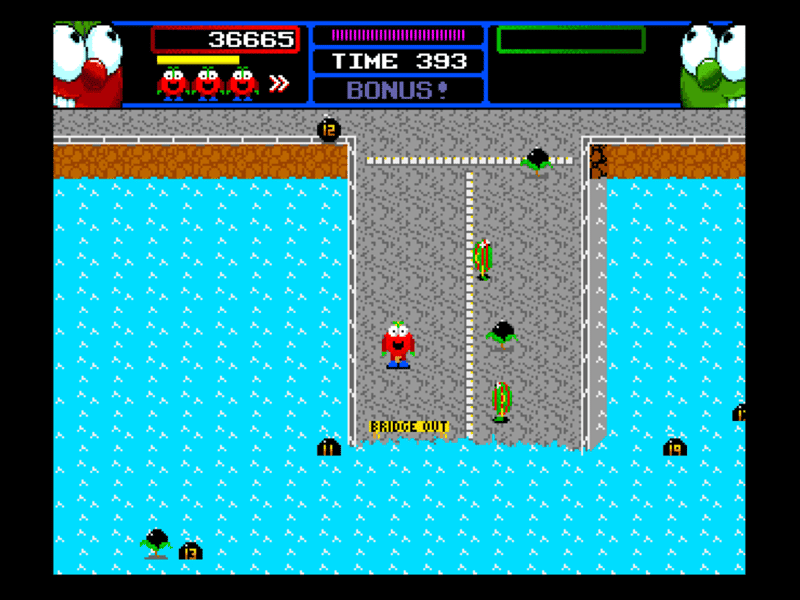 Most of the time while playing the game will be a rather stressful time and yes you will die at random times because there is a lot of action and whatnot to take your focus away and these things can break a game for sure but after months of adjusting and trying to make it addictive and fun has paid off and as the game is now in release form I will just say it like this – You will die, you will want to take breaks but man you will return stronger for every time you start the game and maybe one day complete the final boss and get to see the awesome ending.

Oh wait, there is one more thing, the game comes with built-in trainers and cheats that are accessible from the very first time you start the game, in other words, you can just switch them on and play through the game if you just want to play through the crazy and hilariously funny “story”. 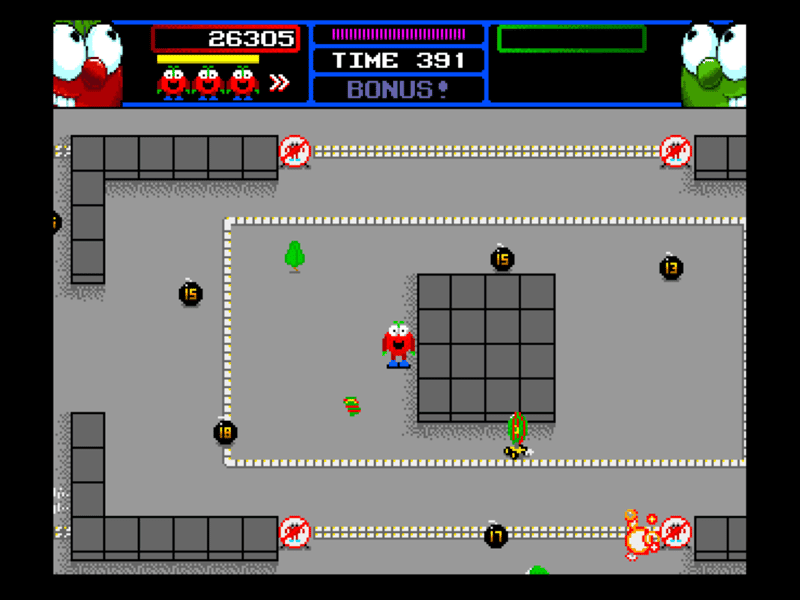 The concept of the game is to kill all enemies to get to the next level and once you do that you get the chance to select your path too as the game has lots of different paths to each boss which means there is actually quite a bit of replay value too here.

The game mechanics are simple, find a bomb and throw it at an enemy but yes that is often easier said than done due to the speed of the game oh and yes the bombs even got a timer on them so yes holding one or walking past one that says 01 normally means PANIC, IT IS TIME FOR PANIC RIGHT NOW! (in most cases of panic I throw them into the wall and they bounce right back into me…)

The game also offers 100% drop-in/drop-out at anytime type of multiplayer co-op, if you thought it was mayhem in 1 player, well, let’s just say that in co-op it is just TOTAL CHAOS haha, friendly fire and bullets everywhere, never before has I seen this on Amiga, what a blast it is!

The game is littered with bonuses, upgrades and so on and the more you pick up the crazier it gets and there are a lot of different enemy types and all of them behave differently like some shoot, some throw bombs, some spew flames etc, the pic above has a REALLY ANNOYING BEE or whatever that you trigger by walking into the flower section.

Yup, IT DOES SAY KEEP OFF, I know but GOD DAMN IT… the game is chaos and it is so easy to step into the flowerbed :p

So my tip to you, watch out for signs like this or hazard signs and so on as they are more than just graphics. 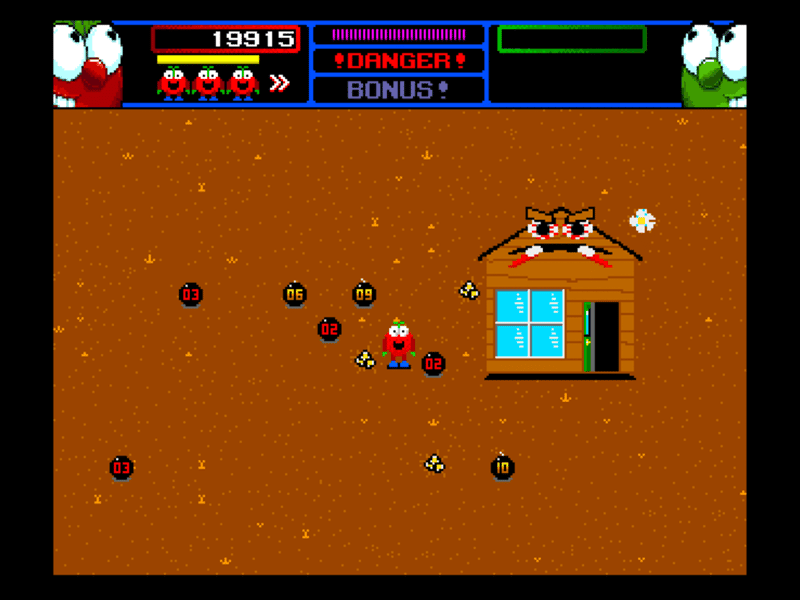 There are 4 main bosses in the game (and a few mini-bosses) and all of these have very distinctive attack patterns and design choices and I honestly doubt you have ever seen anything like them in a game before, originality, humour and design twists really do wonder for the creative soul.

Like this first boss, it is a tool/garden shed lol and the way to win over it is to actually break the windows by throwing bombs at it, a really satisfying boss fight really, it is not often I get told to break a window on purpose but then again I have never seen a jumping shed either.

It just works, the sound, the music, the action, it is all fine-tuned and adjusted to make the best window breaking experience ever seen in an Amiga game. 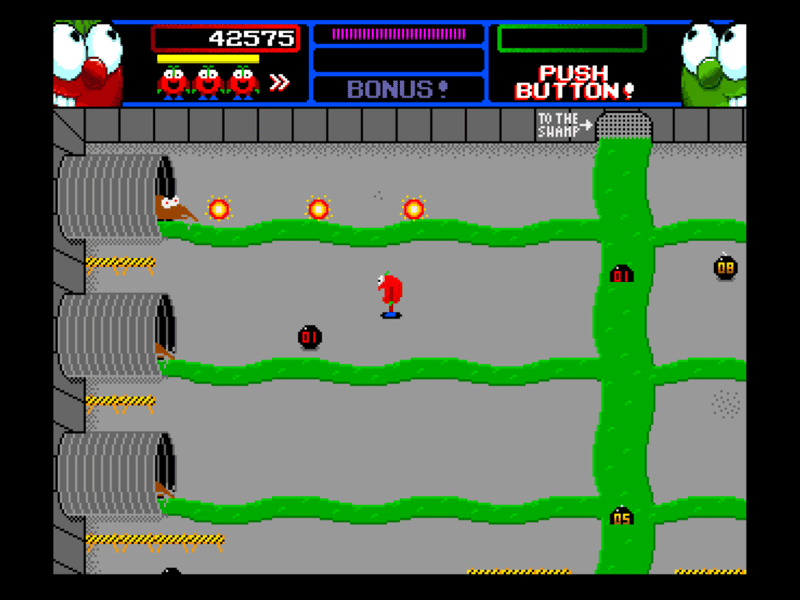 Totally bonkers stuff is seen throughout the game but I have decided to only cover stuff up to the World 2 boss fight (out of 4) so that you guys get some surprises while playing it too.

The second boss fight is a very strange one, it is in a sewer covered with rats and to kill them you will have to shoot them as they stick their heads out, this boss was my enemy for months in the beta but I think we nailed it in the end by making it really fun (and challenging) and not just random chaos.

(The picture used here is from an older build that differs quite a bit from the final build in the game). 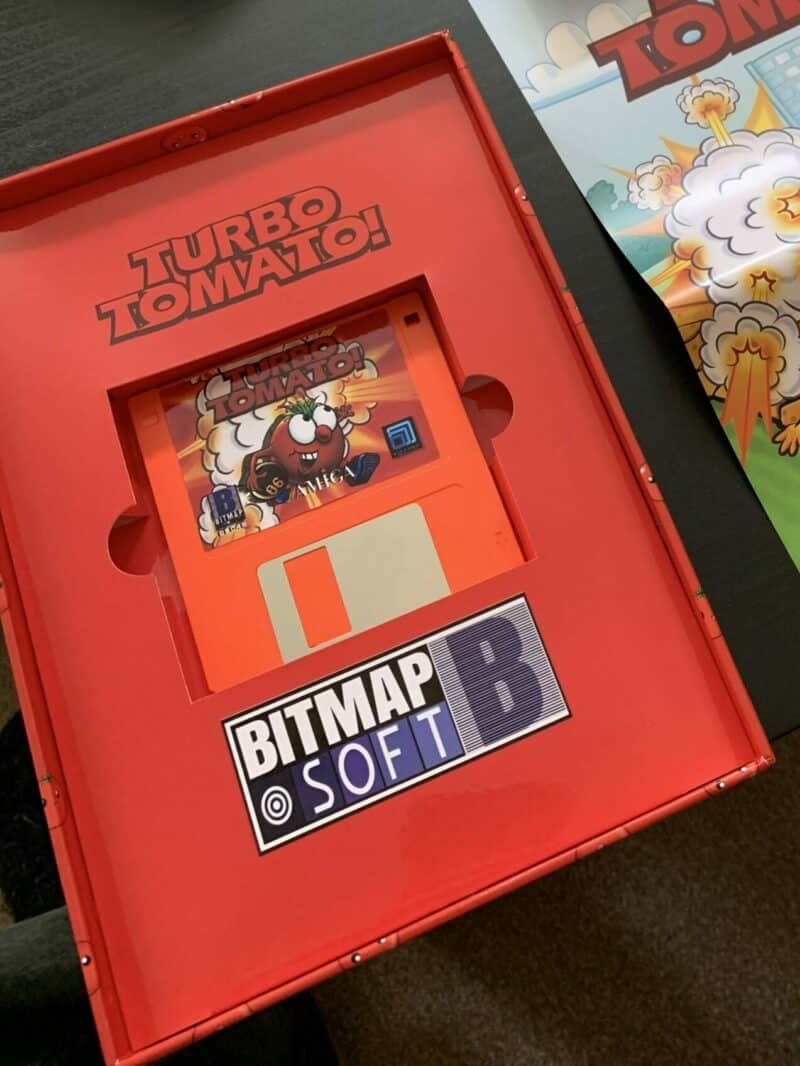 The Physical edition review will be up later on but I will mention a few things about it now.

The most notable thing with the box is the colour, it has to be the reddest (hah!) box in my collection and I love the side art to bits, it just screams PULL ME OUT and PLAY ME NOW!

TURBO TOMATO comes in the same exact size as the Slayers of High Toro box that I reviewed a week or so ago and it comes with a Poster, stickers and an instruction booklet in colour.

A really cool new addition that comes with this box is the Floppy disk pocket (!), a thing I have been wanting to happen with new game releases for quite a while now.

Bitmap Soft has finally found its way with a standard they like now and it has to be said that they are doing a mighty fine job here and it won’t take long before developers will do what they can to have them as their publisher for their upcoming game(s). 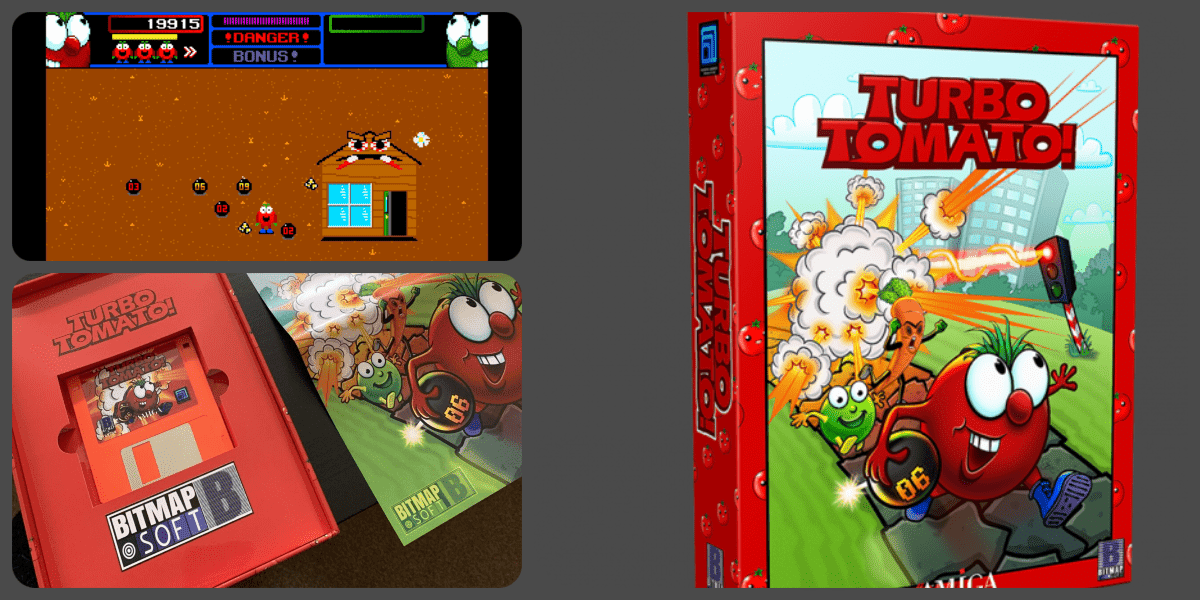 Turbo Tomato is a game like no other on Amiga for sure and in fear of repeating myself in just about every single release lately, yup, this is yet another BUY IT NOW game as it is a keeper and one that everyone out there with or without a kid will love as long as you give it a bit of time. The style, the mechanics and the amount of time that must have gone into all the humour and ingenious details has most certainly paid off as yes this game is unique, original and really fun and maybe most of all, a game you can play with your kids and they will love it to bits just like you.

The game is available in both physical and digital form and the place to get them from right now are at the Bitmap Soft website. The price, £25 for the big box version and £10 for the digital download, GO GET SOME.

What an honour it has been to be part of yet another huge Amiga title, forever grateful that the developer scene hasn’t killed me just yet :p