“Borrowing heavily from the arcade game Karate Champ, The Way of the Exploding Fist plays and looks fabulous thanks to the use of over 600 sprite images to animate the player’s movements. The game’s great graphics are complimented by a haunting oriental soundtrack and bone-crunching sound effects as players punch and kick their way to the 10th Dan. The Way of the Exploding Fist was a huge hit scoring 10/10 and game of the Month in C&VG and a 93% Sizzler in ZZAP!64, with Julian Rignall praising the game’s “state-of-art animation and brilliant gameplay”.”

Originally developed on the Commodore 64 in 1985 by Beam Software (Gregg Barnett, Bruce Bayley, Neil Brennan and David Johnston) and published by Melbourne House, the game was such a big hit and ports were soon made for other 8-bit systems of the period, like Amstrad CPC, ZX Spectrum, BBC Micro, Acorn Electron and Commodore 16.

As in modern fighting games, it’s possible to play against the computer or another human player. The solo matches are composed of a series of one-on-one encounters where winning the match takes the player to the next stage and a more difficult adversary. The game doesn’t sport energy bars but the player needed to get two complete yin-yangs before the time is over to win the match. Like in real martial arts fights, you will obtain half or a full point depending on which technic you use and how you land it on your opponent: half a point is represented by half icon; two complete icons end the match.

Despite its apparent simplicity, The Way of the Exploding Fist was a very good game, featuring a full range of moves and highly responsive controls. Like many other games of the period, it was also “dangerous” for your peripherals (I don’t remember how many joysticks I destroyed by playing it) so, if you are craving for a match or two, I would suggest an emulator and modern hardware. I know it’s absolutely not the same, but if you break your precious QuickShot please don’t blame it on me! LOL! 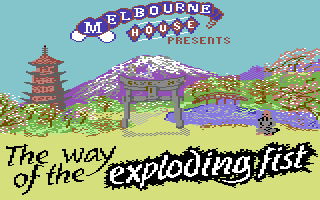