Thursday last week was the day that we have been waiting for, yes WipEout Omega Collection finally got finally updated. The update has been one of the most anticipated updates in a long time.

The update is quite the major one too, the whole game is turned into a PSVR game with this patch, every single feature in the game is in VR too now, there are no cuts or sloppy work to be seen anywhere.

I bought the game last year and asked myself why on earth this wasn’t a VR title, luckily SONY / EPOS/ Clever Beans listened to our prayers and announced a PSVR patch right before Christmas. 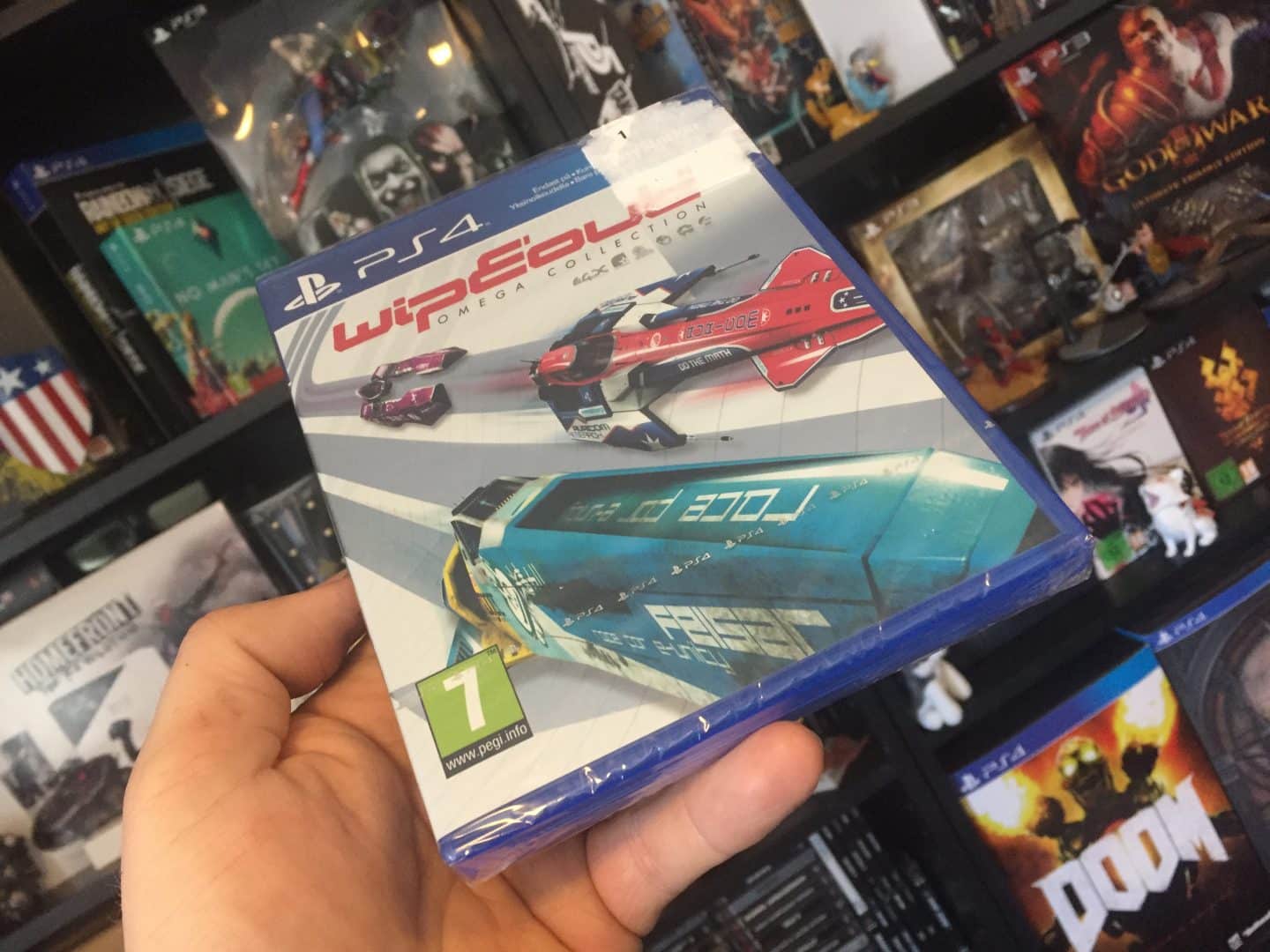 I found this sealed copy of the game in a bargain bin not long ago, less than 7 Euros was what it cost me and i know that this will be sought after now that the VR version is out, i guess many shops regret them getting rid of it just a few weeks before this relaunch.

I will quote a friend who said ” there’s always just shitty games that no one buys in those bins “, his words not mine.  I also picked up Ratchet & Clank, Prey, and Yooka Laylee at the same time from the same bin.

The first thing that hits you when you try this game, is how freaking awesome and clean it looks, everything screams AAA.

The looks stick with all three games in the Collection too, the Vita game 2048 is the best looking for sure, but every track and setting the game is just downright mindblowing.

I have never seen a frame drop or tearing or anything like it, everything is silky smooth and i am pretty damn sure this is the closest you will ever come to riding a POD Racer like thing on a PlayStation 4.

There’s a photo mode in the game too, but i never tried it as i found the usual VR “share button” grabs looked absolutely brilliant nonetheless.

The menu system in the game is pretty unique with a solid music score and with an animated backdrop which is most likely the first thing that will make you go WOW with the game, the sound fx in the menu works splendidly in VR too.

Not every level is dark or grey, actually, that ain’t true as there are lots of levels in daytime and sunshine etc.

This tunnel always impressed me, both in VR and in Flat on the PS4 but i really liked it in 3D on the PS3 too, the colors used and the clarity of it just makes me go – OMG IS THIS REAL?.

I have to admit that i am really impressed here, even though this is a near ten year old track.

Then there was the sound, music and so on.

The music has always played a huge part in the Wipeout games and while the original PlayStation One 2097 music set is impossible to beat, the music in Omega Collection is still superb and gives that little extra when you are going at Mach 1 speed.

There are enough music tracks in the game to make most happy.

The sound fx are the best yet of all the games in the Wipeout franchise, the “3D sound” works really good, the sound of ships flying past you on the side  sounds incredible, the weapons sounds great and maybe most of all is the multiple speech types you get for each type of ship producer/make.

Who the hell said VR games never was beautiful, seriously this is just so good looking that I probably restarted this track like 10+ times the first time i unlocked it.

I simply can’t even imagine how the next generation PSVR sets will look like.

This is the only track that i am a bit, well i find the track not as polished as the rest of the game and maybe most of all it’s pretty annoying to drive at the later stages in the game as the ships are too fast for it.

That said, this might be the best of the lot once i get the hang of it (i have gold but still suck at it).

Another brilliantly designed track, this is on my top 3 of all time list of Wipeout tracks.

The jumps, the tight turns and maybe most of all the boost pads are placed perfectly.

This here is my all time favorite track, seeing this in VR made me realize that this game is one of the best i have ever played in VR.

This track alone made me forget about Polybius in VR for a moment and as of now, i can say with ease that the number 2 VR spot is in danger, yes this game is THAT good.

The Zone modes (Zone & Zone Battle) are still as fun now as they were back in 2009(?), fantastic speeds are what you drive at here, if you can stay alive that is.

Absolutely brilliant stuff and more so now than ever before thanks to VR.

Detonator is one of those modes that i had totally forgotten about, it was first introduced in the HD Fury package on the PS3 and just let’s say that it’s better now than ever thanks to the VR and the feeling of being there, easy to play hard to master.

The Detonator and the Eliminator modes made the last package in the game feel fresh (The Fury package is the last part of the Omega Collection, you can select it anything you like but if played in the order it’s in the menu of the game then this is the 3rd and final one…

I have only tried the game with the PS4 PRO + VR but based on what i have seen on streams and elsewhere shows a really good looking game on the normal PS4 too.

Have no fear, you will be eaten alive in the game with or without a PRO.

The Zone mode in 2048 looks a bit different to the PS3 ones, I like how they stayed true to that and didn’t change everything into one type only.

The Zone modes, in general, can cause a lot of nausea for people who haven’t built up their VR legs yet although there are lots of options that can be switched ON if one wants to start off gently, this applies to everywhere in the game so if you want you can even play it in third person view.

Here you can see me trying out 2048 for the first time, the full stream can be found on the channel, but beware – it’s in Norwegian.

Oh, and before I forget it, the stream is only recorded at 30 FPS whilst the game run in 60+.

So what’s the verdict then?

Wipeout Omega Collection VR is first and foremost the ultimate system seller for the PSVR, it pushes all the correct switches and maybe most importantly they didn’t dumb it down for people who haven’t got their VR legs yet.  This is one of the best VR games to date and after 20+ hours of playing it (and completed all 3 careers) in VR have made me realize that this will slip into my TOP two VR game of all time list, yes in front of Polybius, REZ, and Moss.

THIS IS THE SYSTEM SELLER YOU BEGGED FOR, GO GET IT!