So what makes a game good?, originality?, Gameplay?, Mechanics?, Graphics?, Sound?, Design? everything?. who knows really as i like many games which i never should have even looked at let alone play it and sometimes i hate games everyone else seems to love endlessly…. i am Amigaguru, and i guess that is one of the reasons that i and others go to this blog daily.

The picture above: Touchpad underneath the Vita is used to make a hole in the ground where you move your finger to control the “pipe” thing over to the hidden area. 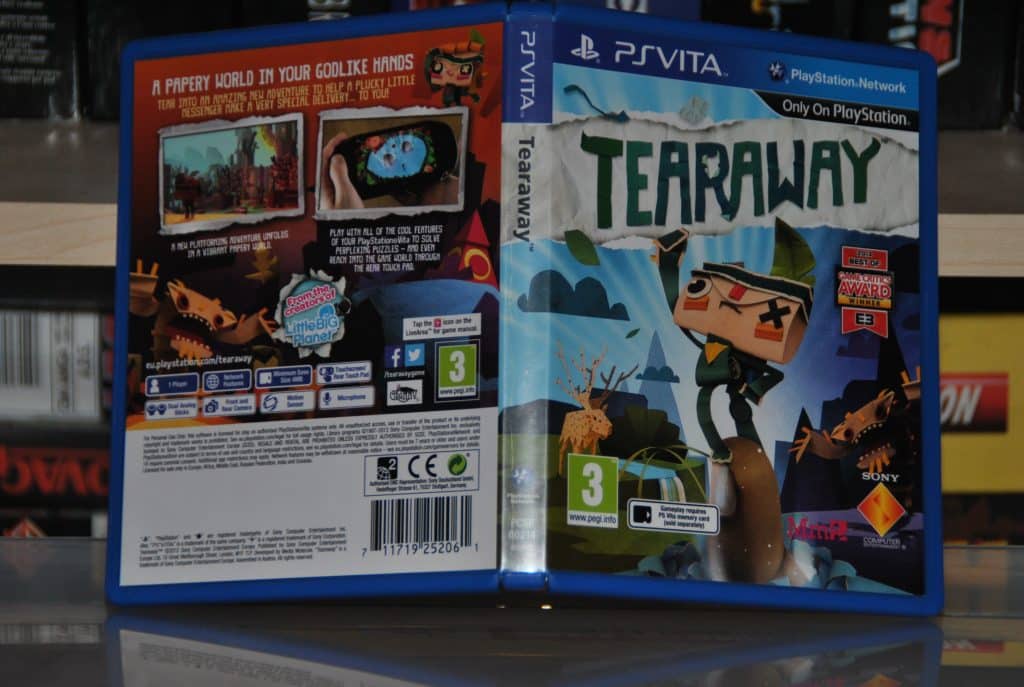 Back in the day of the golden years in gaming, with that i mean when it was pioneering everything, Nintendo formed us all with Mario, everyone knows Mario and even Luigi, good games? most certainly so but even better was how they managed to get better and still do without them breaking it to pieces like SEGA did or are doing with Sonic, many thought that Crash Bandicoot was the Sony mascot, heck even i did that and i was enormously into the PSX/1 era, Crash was what Sonic and Mario was to their consoles and as we all know now, SONY did not own the franchise and they managed to let both Crash Bandicoot and the other famous PSX/1 Mascot Spyro slip through their hands and into the wild.

The picture above: typical stats screen makes it easy for the game to see how many of the pickups are left and if the main objective is done etc.

I won’t go too much into the past but SONY have had loads of potential mascots but somehow they never managed to profile them enough or interesting enough to make the gamers and people all over the world to say “Ah yes! i know that thing!” like they do with Sonic and Mario and even Crash Bandicoot… Sony is “stuck” with major titles and characters like Kratos / GOD OF WAR, JAK AND DAXTER, Ratchet And Clank, Loco Roco and Uncharted among many others and the only one i can think of right now is Sackboy from LittleBigPlanet, a very cute mascot, underused and needs more games to its name but yet again Sony seems to somewhat ignore him in their commercials.

The picture above: this one was a neat idea, to do huge jumps like in the shot above you will have to hit the backplate (touchpad) to make the “trampoline” or whatever to send you over to the other side, works great, no issues or delays what so ever.

From LittleBigPlanet to Tearaway, Tearaway is Media Molecules second Playstation franchise and much like LittleBigPlanet revolutionized the gameplay style so does Tearaway, which is a Vita Exclusive and it use’s just about every feature possible on the Vita hardware and it is very clear from the first second you start till the very last one that this game was 100% crafted for the Vita and with no special plans to port it or whatever to another format later on.

See that ugly mug there? that’s me! and i am part of the gameplay, interesting game idea too, really funny to see how they managed to make a fool out of me throughout the game, if it had been in the schoolyard then i would have punched them in their face …umm… , gone to the teacher and told them bullying me that is…

Here the “envelope” which is the name of the character you play? get a friend, riding him around is fun and very intuitive, no issues with controls or framerates etc and it looks awesome too.
Riding animals brings me back to Mario and Crash Bandicoot times, damn i miss riding the shit out of them in Crash Bandicoot!, really sad how we have no Crash Bandicoot PS3 game, those later ones on PS2 was “OK” but far from the old ones on PS1 but still…..

Details in Tearaway are in places you wouldn’t expect them to be in a game like this, they have spent a helluva lot of time in making this game a 100% paper’ish journey and I’d say that they succeed with that…well at least later on in the game.

It was around this place that the game got very interesting for me, it went from cool to amazing really, i struggled with taking screenshots as i was too busy playing the god damn thing! but i can safely say that if you get past the halfway point in the game then you will totally not stop there as that’s when it takes chances and goes the way this kind of games should go, HARD! and challenging although this game is too generous when it comes to life’s and continues so that breaks the immersion a bit as an experience it still made me very happy!.

ooooh, they made me look like a fool again, the envelope is about to meet its destiny – ME! …but wait!, i am playing ME and i am also the envelope!… hmm will reviewers and website wannabee’s realize the point of it all or will they just mark the game down in order to justify their time browsing Q&A’s in google?

All of today’s platformer games needs a fly down a tunnel type of gameplay level…or was that only Ratchet And Clank? who cares? it works and yet again the Vita shows it can do stuff no other handheld could do…or even some consoles!.

I won’t spoil this for you guys…

Anyways, so how was the game?, the game started of pretty ok but i got tired of it as it felt a bit… “stale” but when i picked it up again and played it for a few hours more then the game got really good, i wish it had been more difficult with spawn points like in LBP (1) or even save game spots like in Crash 1,2,3 as that latter part of the game was really good and i wish i had felt the levels more than i did as it felt a bit easy due to the number of lives and such.

I will do a 2013 list for the Vita too but i can safely say that this game is very close, if not at the top of the G.O.T.Y list.

PS:Sony, if you listen!, BRING US ANOTHER LOCO ROCO GAME!

1 thought on “Wrap Around? – Tearaway PSVita”