First of all, I have to admit something and yes this is a review of a game that I actually worked a bit on as a tester++ and you might even spot me in the credits too so yes the review here might sound a bit biased and overhyped but I have tried my best to do as always and present a good read with the information needed for potential buyers and Amiga fans about the game etc as well as a few tidbits of exclusive stuff. 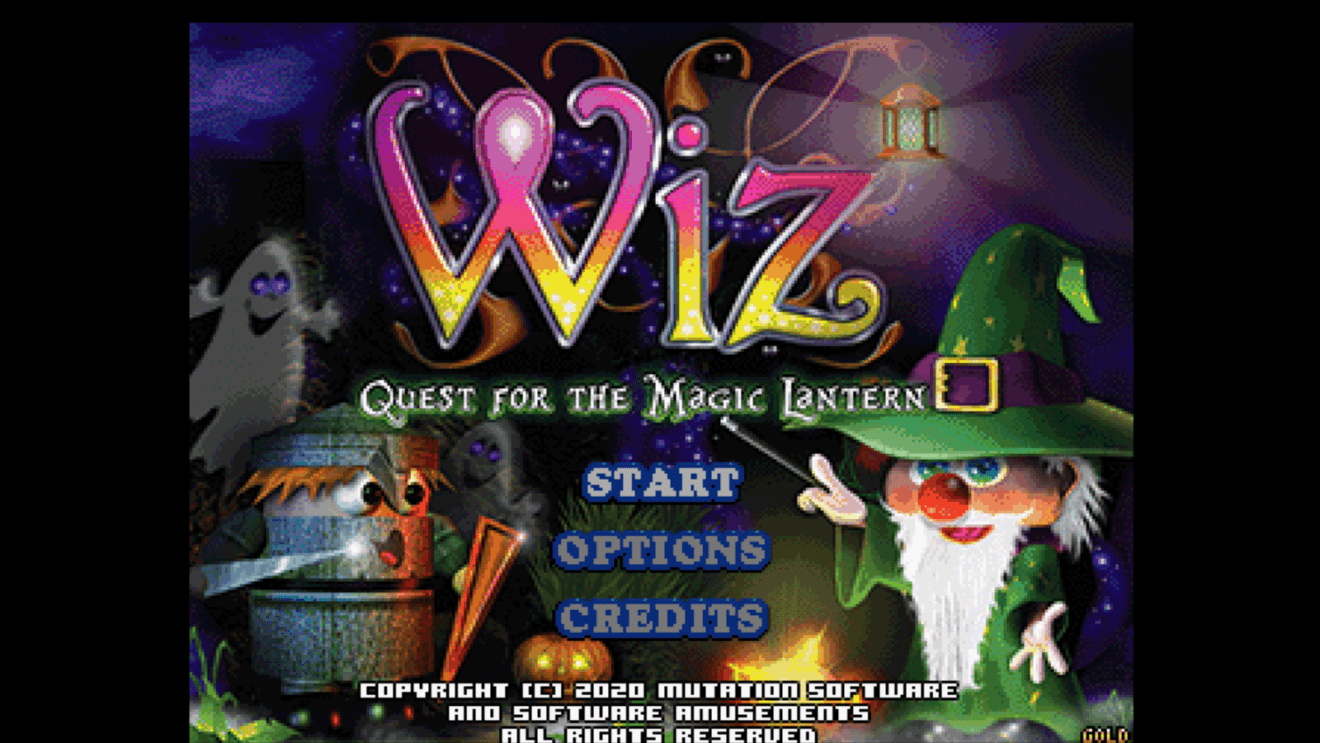 Wiz – Quest For The Magic Lantern is finally done and has now officially gone gold, printing manuals and disk labels, as well as USB stickers, are being made as we speak…errr write and as some of you know out there this game release is a huge thing for the Amiga community as it marks the return of Mutation Software for the Amiga, their last game on the Amiga was back in the late 90s and you can read more about them in one of my earlier articles. 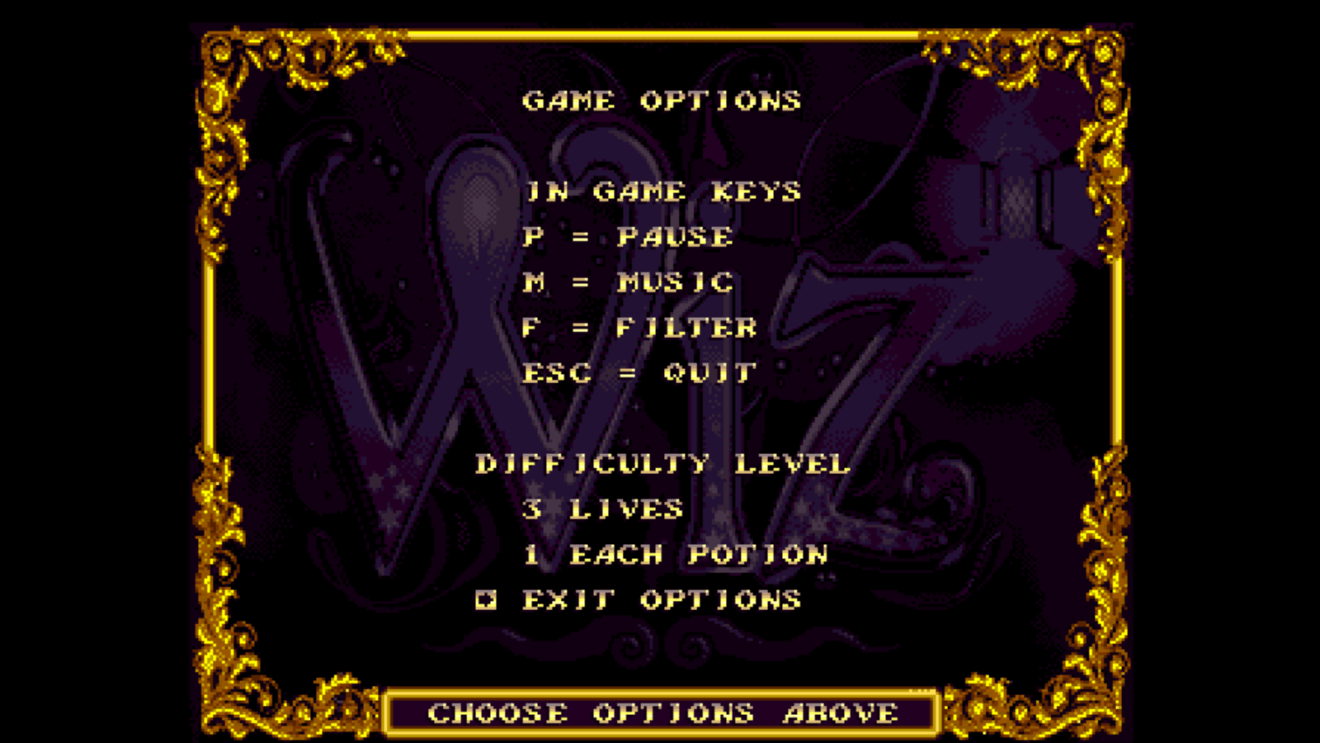 Wiz – Quest For The Magic Lantern is a typical Platforming type of game with a few minor puzzles and such to make it interesting for most people out there, the difficulty is very different to older Mutation Software games for the Amiga thanks to better game design and clearer goals(?) but there will be times that you will want to scream for sure.

But, don’t worry as there is even an option to make it easier by adding more lives (5) and potions (3) which helps a lot for most parts of the game, yes I know that there is such an option in Tin Toy too and that was still hard after adding more lives but no need to worry, this is a game for all ages.

The game also got a continue system which will let you continue from the world you got before you lost all your lives which is sure to make many casual gamers happy. 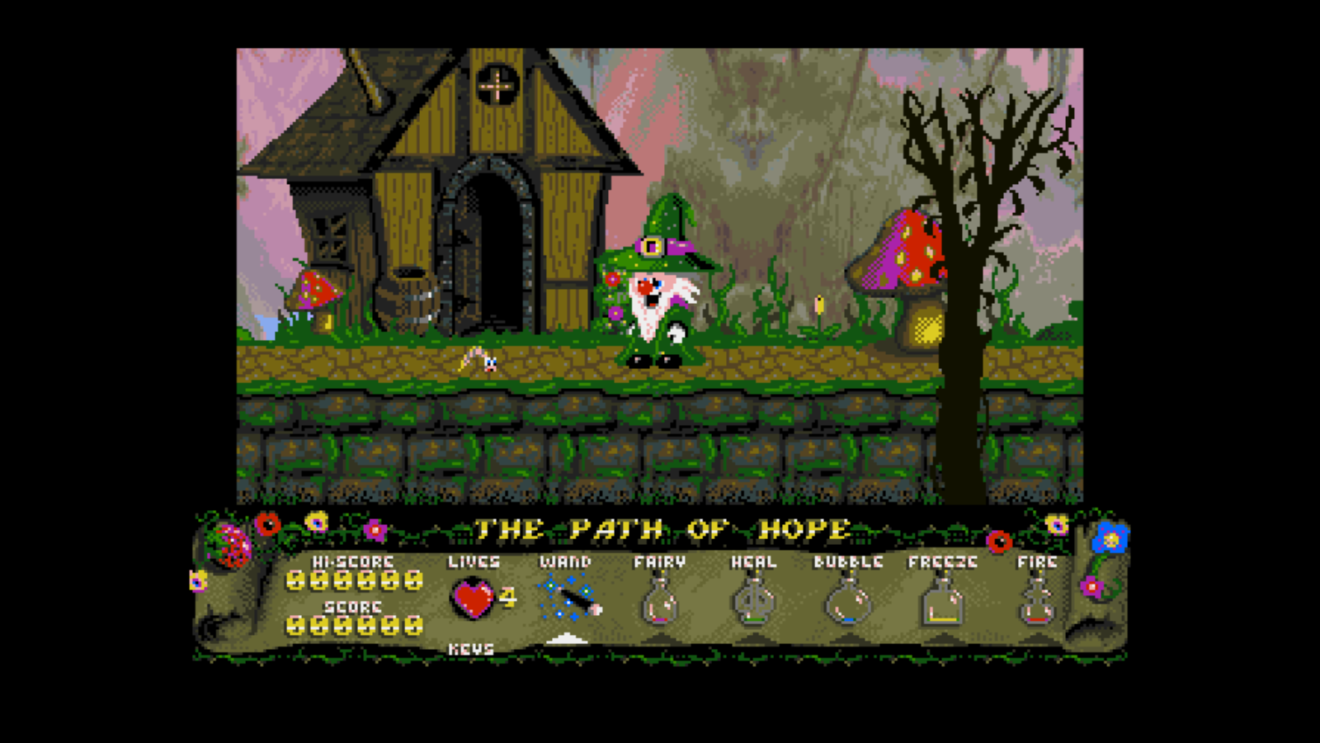 This is where your journey starts and it won’t take long before you fall in love with the style and feel of everything and as you progress through the worlds (called acts in-game) you will also be served a pretty good story about your protagonist Wiz and his quest for the magic lantern and his mission to slay the evil witch Wartnose.

This is the world (Act 1) that you can play in the demo version that was released last Sunday on AmigaBill’s wonderful hype stream, you can download it from the Mutation Software Website.

You get to pick up various flasks of potions on your quest and they come in several colours to make it easier to recognize what they actually do.

To activate a potion you will have to press DOWN and then scroll right to select the one you want to use, there is a white arrow underneath the potion that will tell which one you are about to choose.

There is also support for 2 buttons ( and more buttons) pads which means you get to jump or select potions etc with buttons instead of up/down etc. 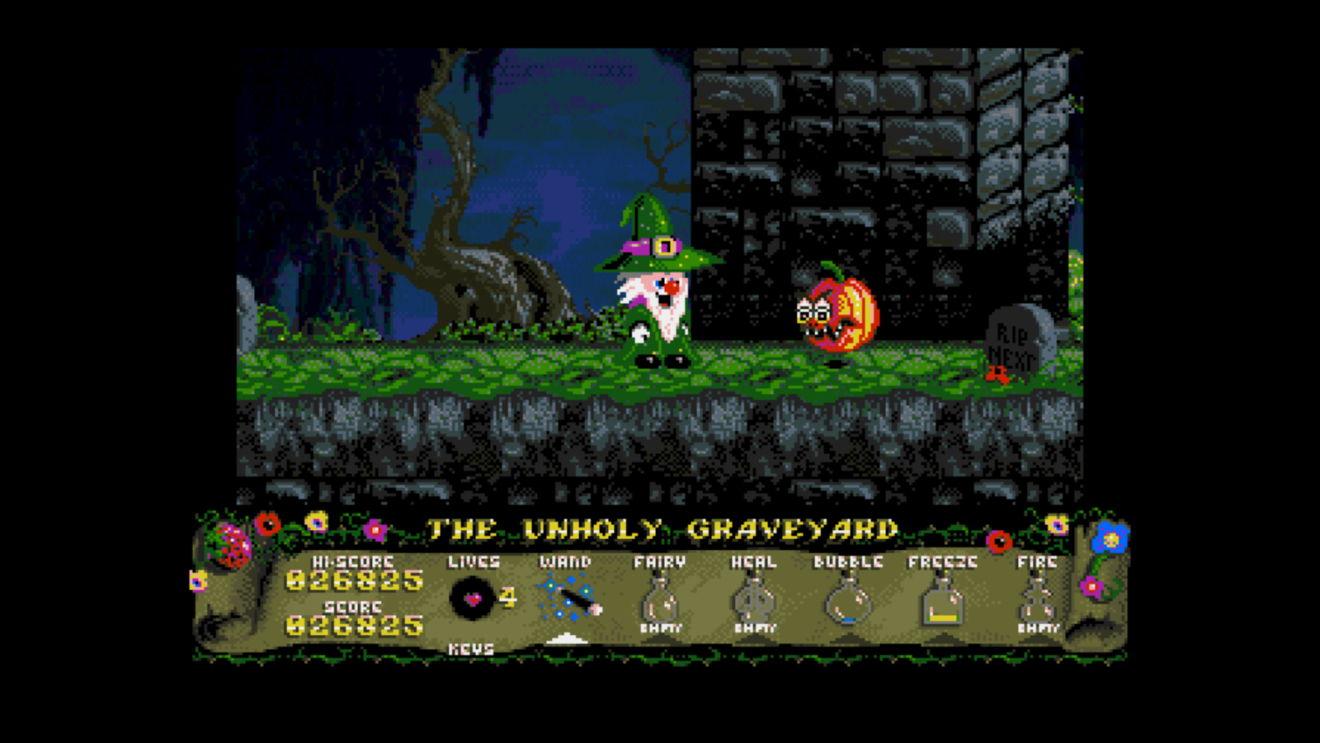 The second act sends you to the graveyard where the theme feels a bit like a Halloween type of world, the style and feel of the level ooze quality and charm and this is the first level where you will be challenged with some puzzles.

The colours, the style and the graphics keep on giving and it won’t last long before you got the tune stuck in your head too.

Jumping on enemies will kill them although some enemies will require you to jump quite a lot on their head before they die, yes even bosses can be taken out this way.

There are multiple paths to take and ways to go and you might even get lost for a bit but it won’t take long before you master it as everything is rather intuitive and most of all fun. 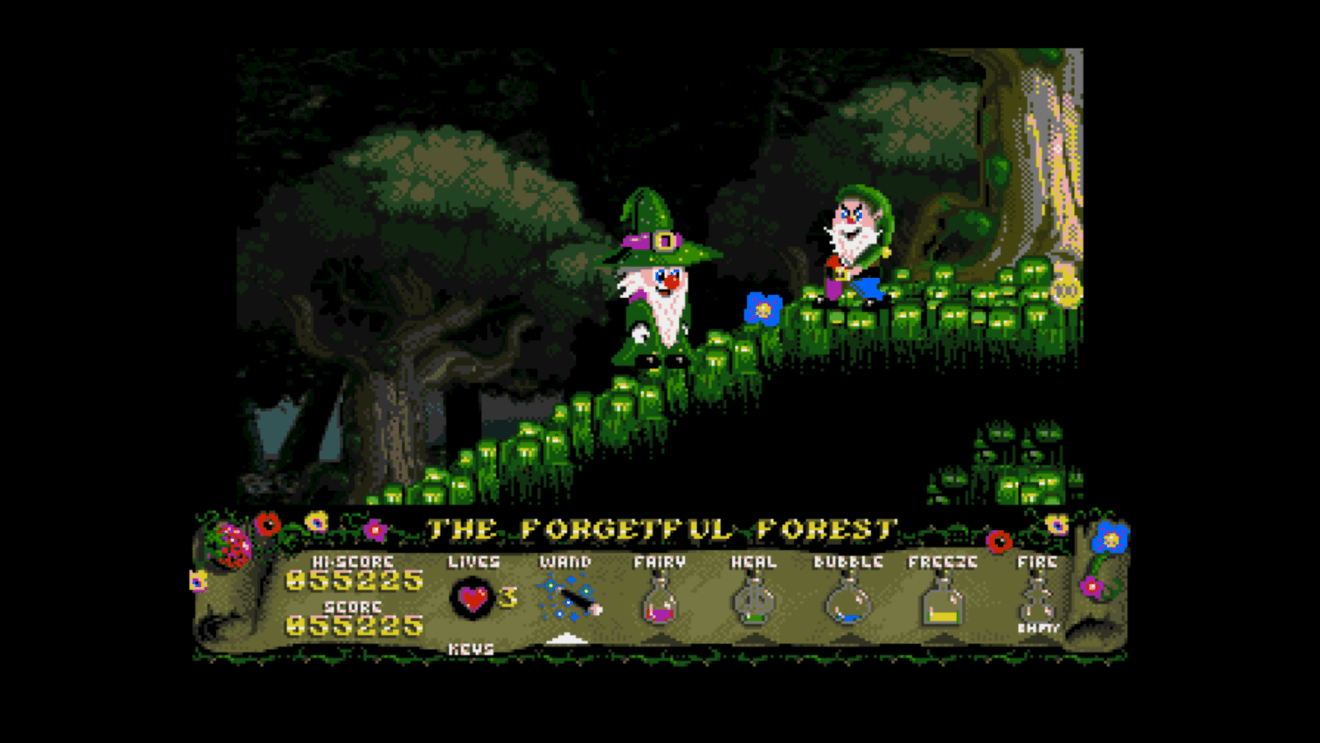 Act 3 brings you to the forest which is quite possibly the best-looking forest that you will visit on the Amiga this year.

There are some sinister dwarfs in the forest as well as a very clever puzzle that took me a while to figure out, normally I hate puzzle elements in platformers as it takes away the flow but the ones in this game work rather good without making you stop and think too much.

The amount of time that must have gone into drawing the graphics and doing the clear backgrounds in order to not make the game look too crowded has taken months of hard work for sure and yes the lovely parallax scrolling helps to bring everything into a living forest. 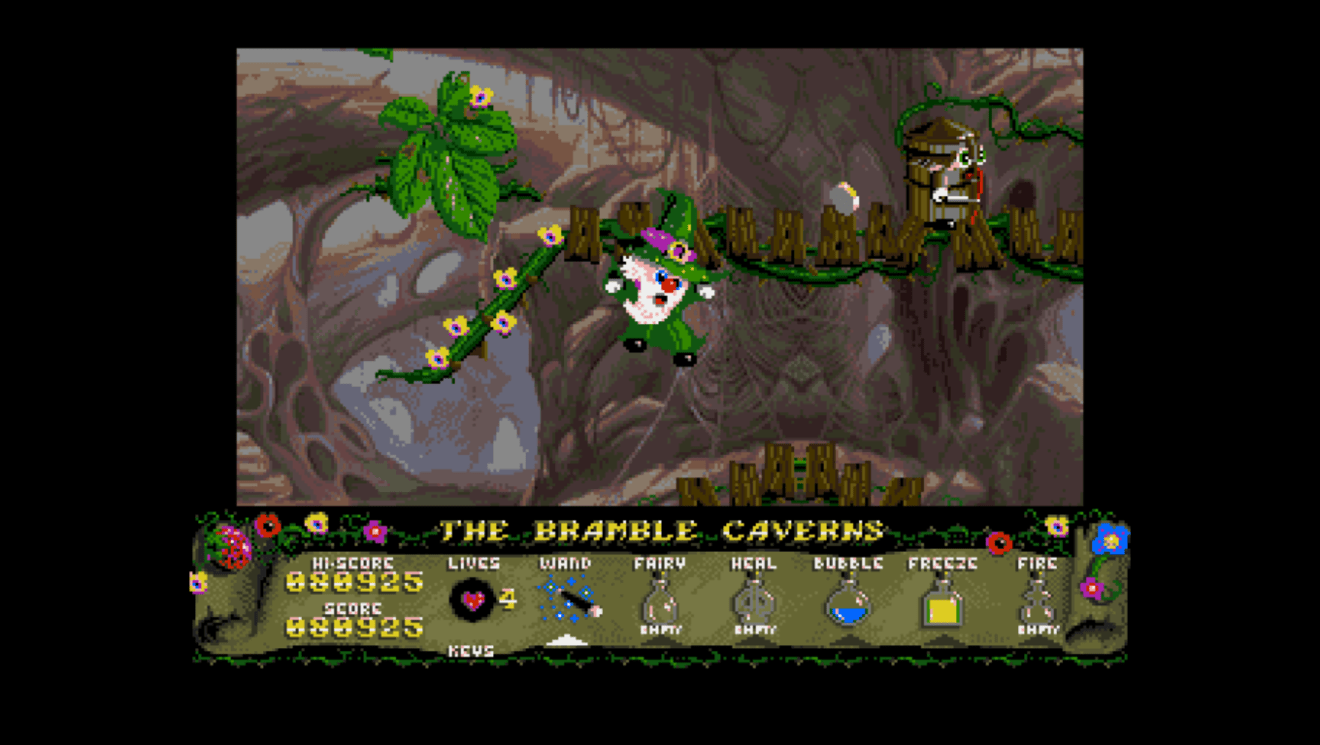 Wiz keeps on giving and the 4th Act – The Bramble Caverns ain’t any different, magnificent style, mechanics, puzzles and it is so fun to wander around looking for where you need to go, Wiz, in general, may look like a Left To Right platformer game, right? , well it ain’t,  you go up, down, left and right.

Sounds confusing and annoying? Well, have no fear.

Wiz – Quest For The Magic Lantern Comes on 2 floppy disks and works on every AGA Amiga out there, my review and tests were done on a CD32 with an SX-1 + CBM 1010 Floppy Drive and various Terrible Fire cards running the game from CF Cards and SD Cards via the games Harddrive installer.

The game will be out 07 of November 2020 and can be purchased from MutationSoftwares website and for now, there will be two versions of it and a third option will come a bit later if things go as planned…

The physical version will cost you £15 GBP and can be bought from here.

The Physical version will only come with floppy disks for a limited time, on 100 copies will be on Floppy and after that, the only way you can get the game physically is on a USB stick.

The first 100 boxes will also have a little extra bonus inside the box too so make sure to not miss out.

Digital version will be $9.99 USD and can be bought from the Mutation Software/Software Amusements Itch.io site. 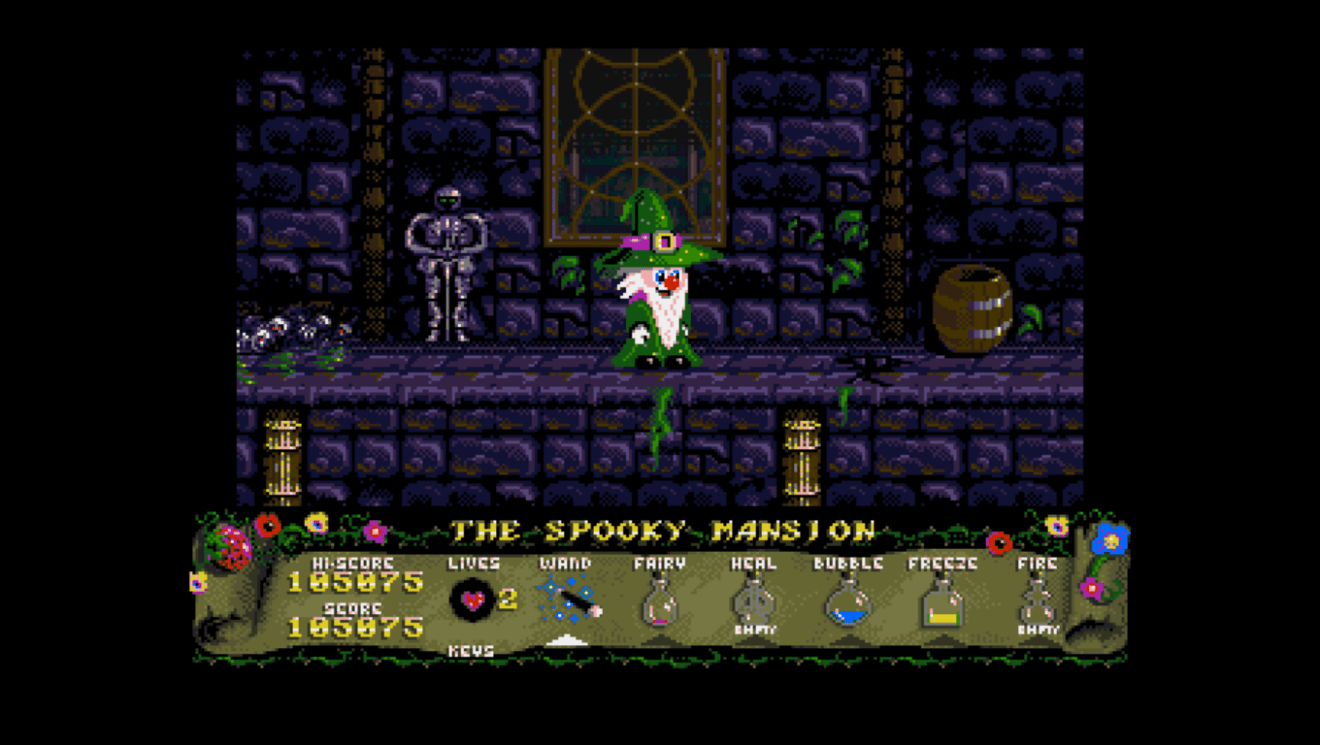 This is the final world and the only picture that I will show of it for now as I really don’t want to spoil all the fun for you guys.

The Spooky Mansion is probably my favourite level for many reasons and I really hope all of you can get to this level just to experience it.

Oh, and yes, my good friend RoarTJ dressed me up for Halloween for the article, major thanks goes to him as always.  Happy Halloween everyone. 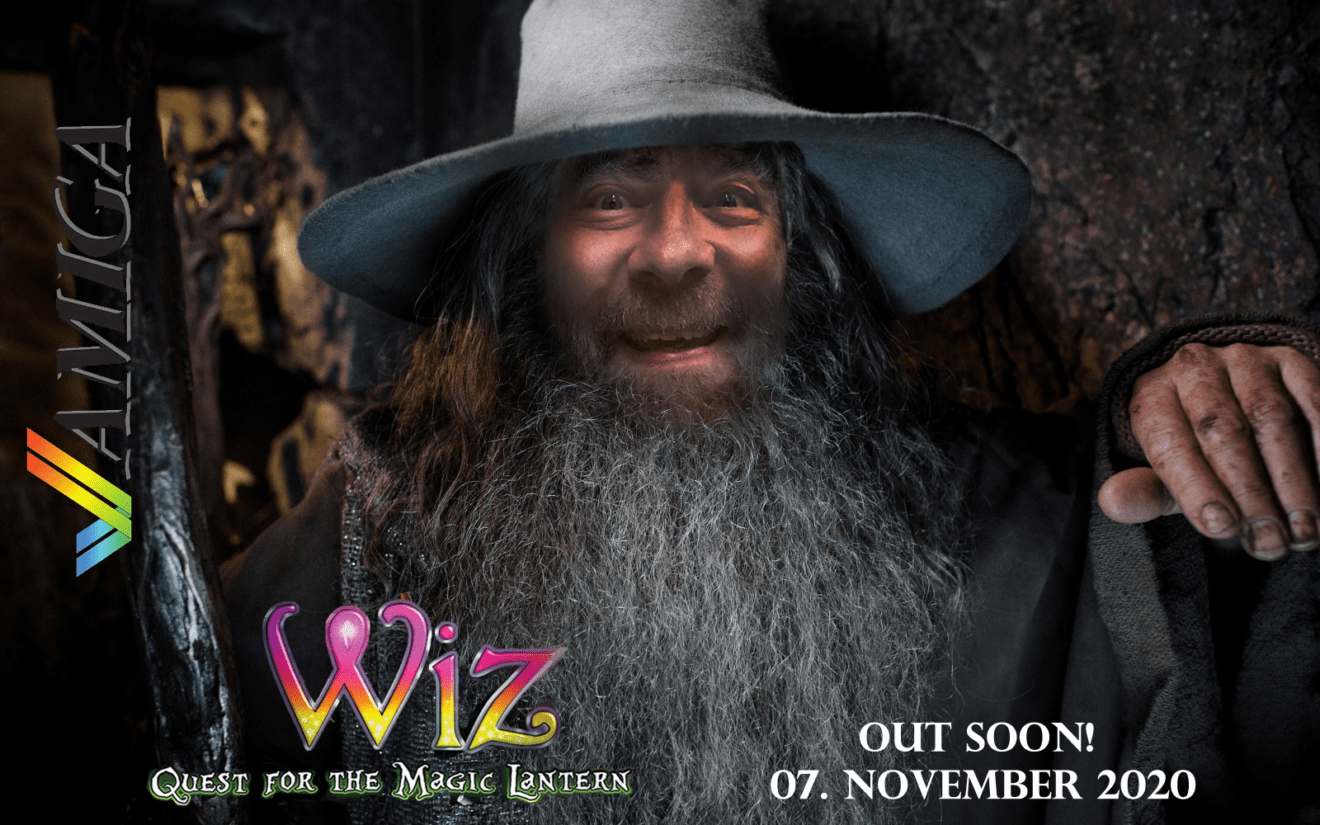 Wiz – Quest For The Magic Lantern is to me “The platformer that I have wanted for years” and while we have had quite a few pretty good platformers over the last few years none of them has reached this level of quality and style and the only thing that doesn’t bring Wiz to the very top is the boss fights where you get you to get some annoying frame drops that ruin a bit of the fun but ultimately that ain’t all that much of a problem for most people out there. Mutation Software has managed to put an AAA title on the Amiga in 2020 which means it is a must-buy title and one that every single Amiga owner out there needs to support.