Besides being a game addicted I have many other hobbies (one of them is coding) so every once in a while I scan the net for inspiration. What I usually look for are coding related books (way too many, out there), or games related stuff presented in a peculiar fashion.
It was during one of these “hunts” that I came across Terrible old games you’ve probably never heard of, a fun book by Stuart Ashen that deals with video games during “the days of tight budgets and low-quality controls”.
There are many reasons behind my decision to buy this book, one of them probably being 8-bit era nostalgia. Yet, the book is technically very well made (not the usual low standard product for this kind of subject), solid and well bound. It is also fun to read and gives you an out-of-the-schemes point of view over the product you may actually have played many moons ago…

Before starting this brief presentation I want to thank Unbound for letting me use their copyrighted material in a readable way so that you can directly enjoy snippets of the book. 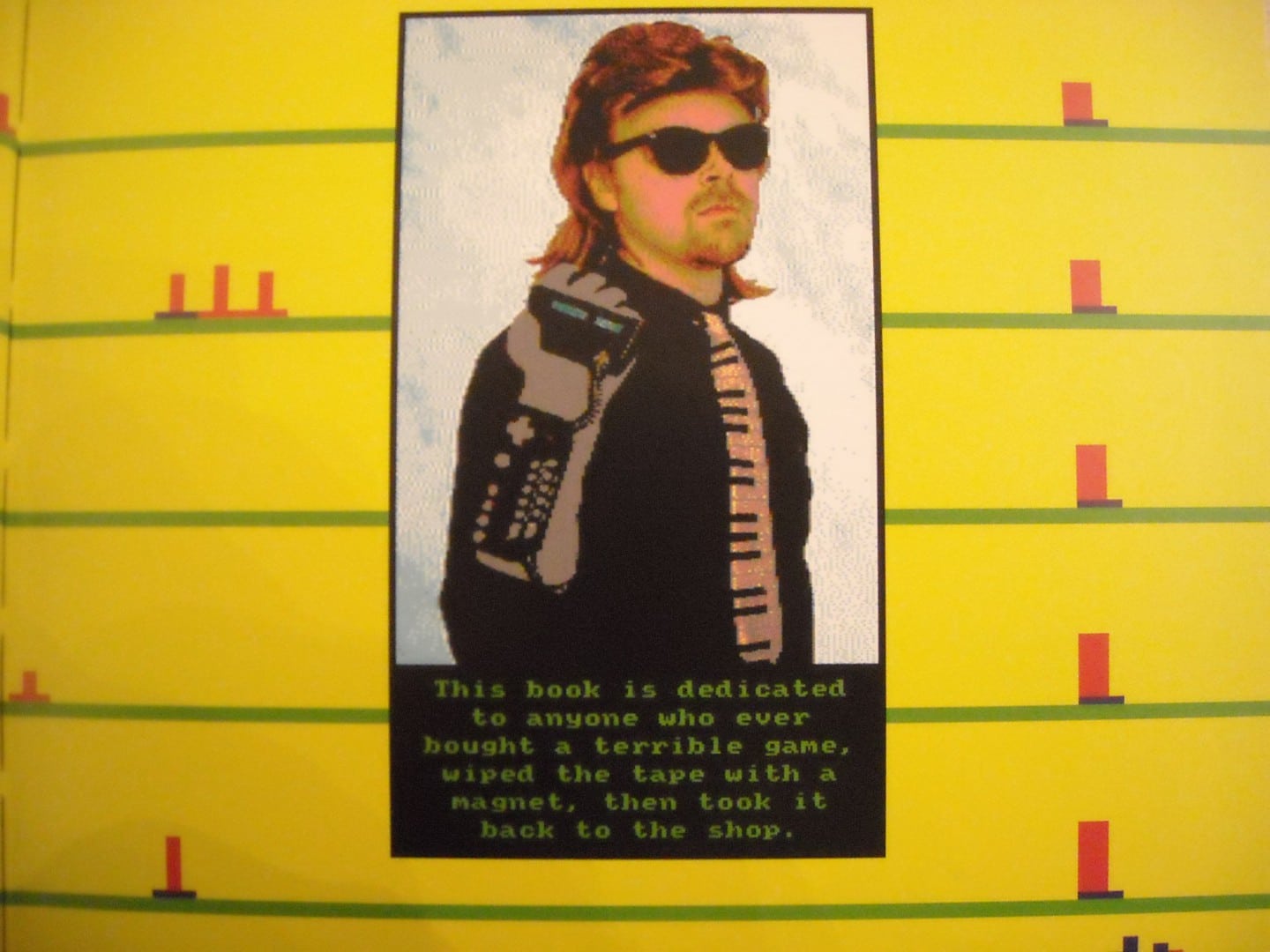 Actually, as you can see, the product is dedicated to all of us, since I guess every one of us experienced those feelings at least once in his/her gaming life. Whenever it happened, I sincerely hope it was not my fault, if you know what I mean …
The first game I encountered in the book came straight out of a VIC-20, a clone of Space Invaders. I have nothing against clones, but as the author says, the problem is the game mechanics: basically, you beat the game when you reach 100 points; since each alien ship is worth 10 points you are likely to play around 36 seconds in total. I also believe there was no trophy system in 1983, so there is absolutely nothing to claim under the voice “replay value”… Stuart was able to beat three version of the game at once by running multiple VIC-20emulators! 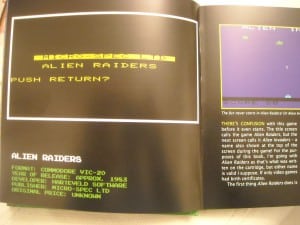 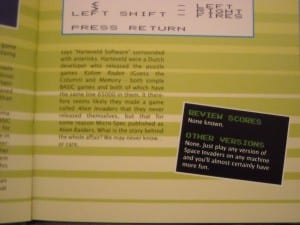 The second game I’d like to show you is Battle Probe, a top view space shooter developed for the Atari ST. Judging from the book pictures the graphics, albeit mostly orange, is not that bad, but it was the collision detection that sucked big time, with bullets passing through your ship or enemy ships trying to escape the game border. Despite their failure as game producers, Stuart grants the developers credits for creating the Technosound Turbo Amiga audio sampler used by The Prodigy in their early works. 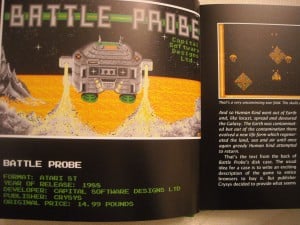 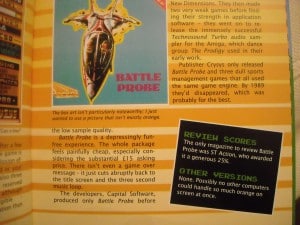 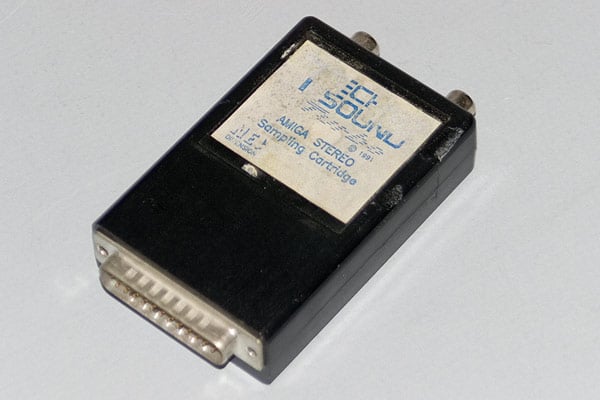 From the Atari St to the Commodore 64, it is now the time of Bionic Granny. I believe further comments are useless. 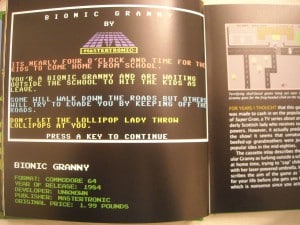 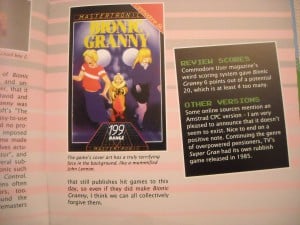 It is now the time for an Amiga game, taken straight from the CD32. It hurts to see a beloved platform in agony, so I’ll let the author speak for me … 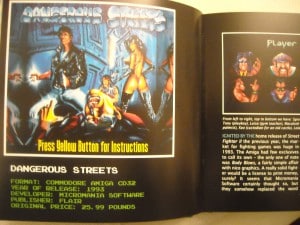 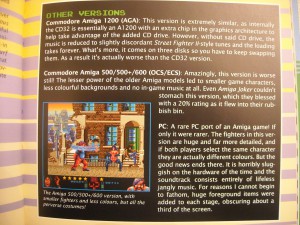 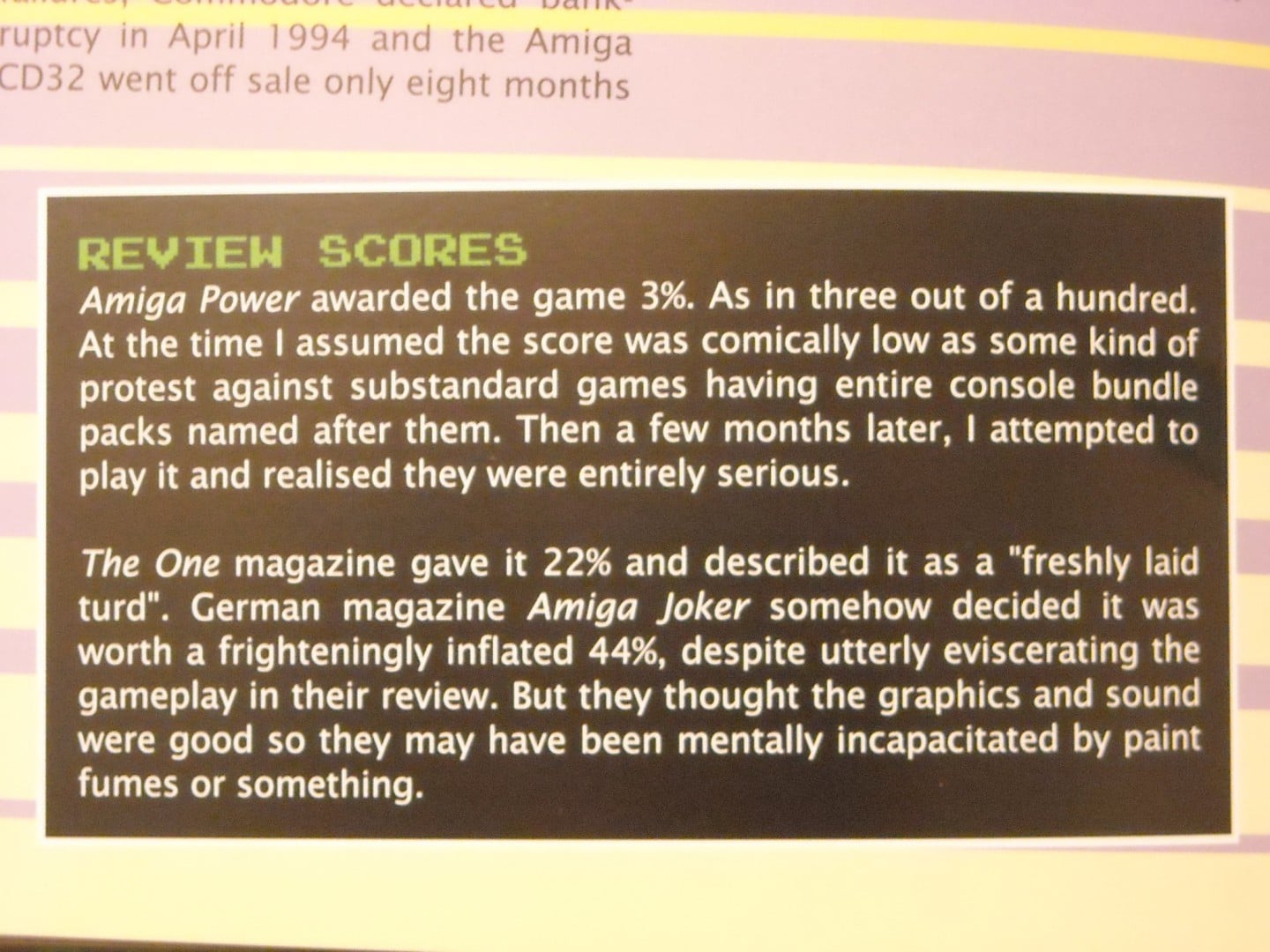 Going back to the Atari (8-bit series, this time) I’d like to present a game that caught my attention for the beauty of its title screen, showing a very nice (and today, very nostalgic) pixel art. 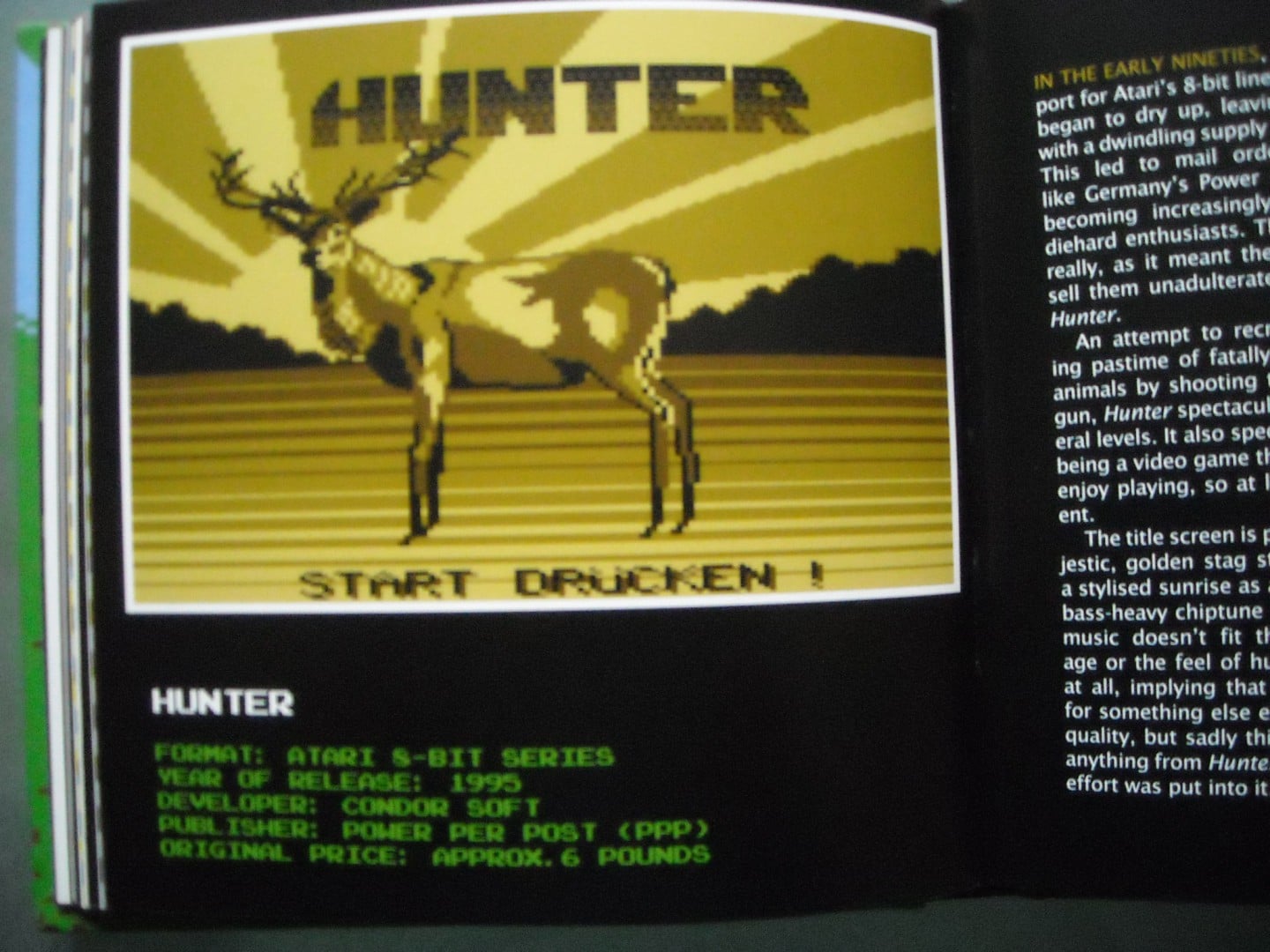 As you may understand, we are talking about a precursor of hunting games. Too bad the game fails on many levels right after the title screen, showing only a single fixed screen, unplayable mechanics and extremely limited sprites. 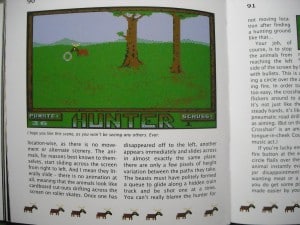 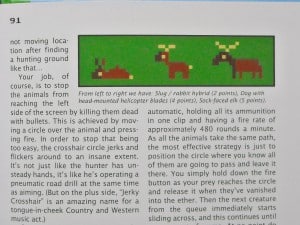 If you forgot the Dragon 32 platform you may as well forget the following game, Show-Jump, in which you had to make a horse run and jump to achieve points. The result is the following: plain yellow background and only 2 frames of animation… 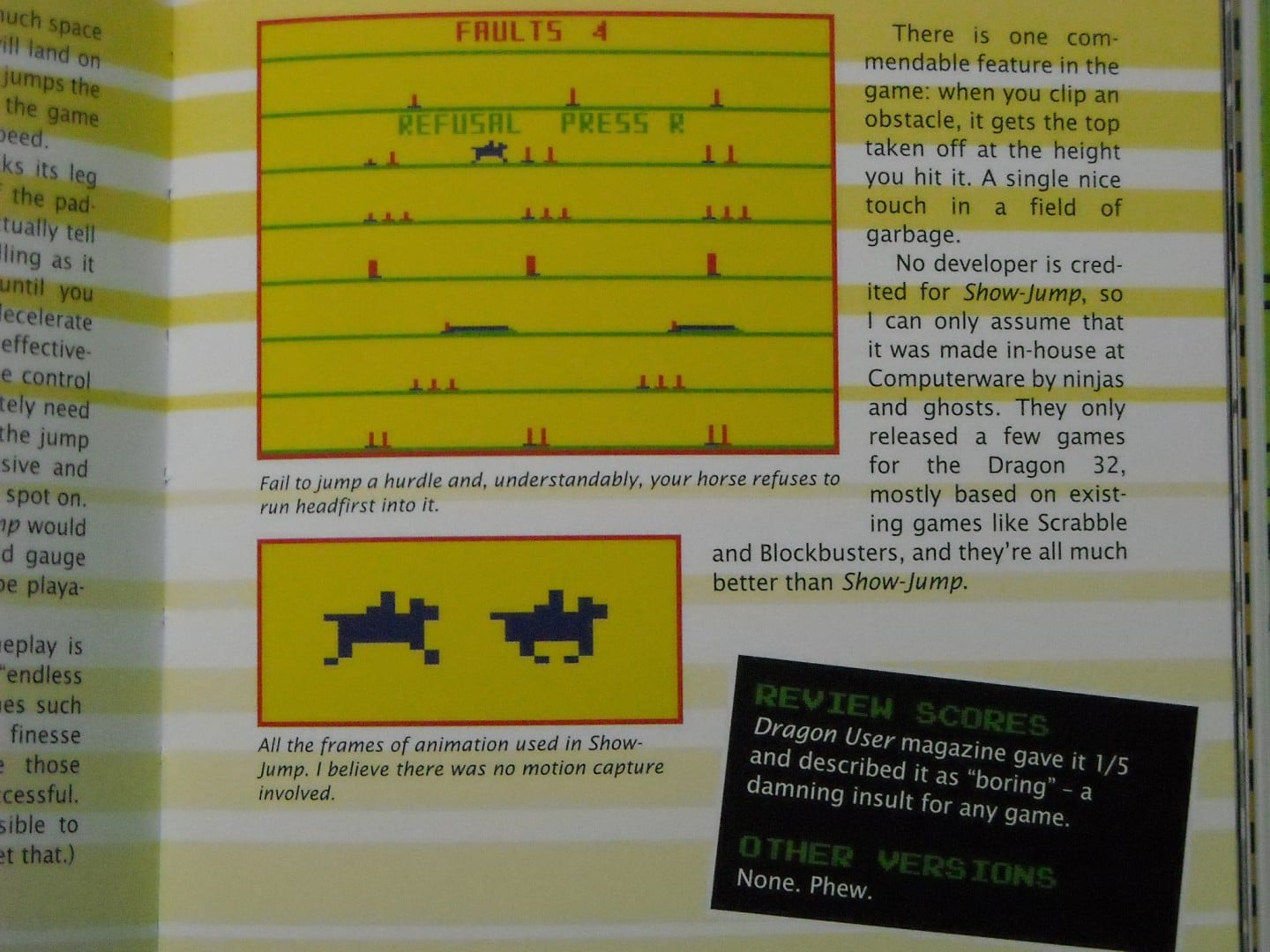 Finally, here is a game for the Amiga 1200 which in truth was never released. It was coded with AMOS Professional by the very author of the book. I’ll let Stuart himself say a few words on it, but I can only say that being a coder doesn’t necessarily mean you must produce awesome games. What I mean, before you guys start to load your guns, is that you don’t learn if you don’t try hard and, sometimes, we just do things for ourselves, out of love and passion. I personally have a bunch of games I wrote and will never release: they were meant for me only, just to prove to myself that I could do it. 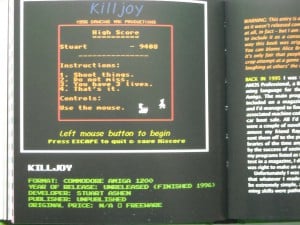 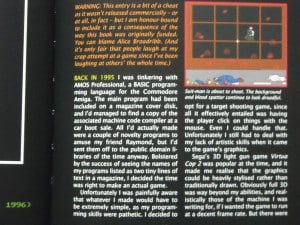 Anyway, I did have fun reading this book. Despite many forgettable games, it is still a piece of our history. If we could only learn from our mistakes… 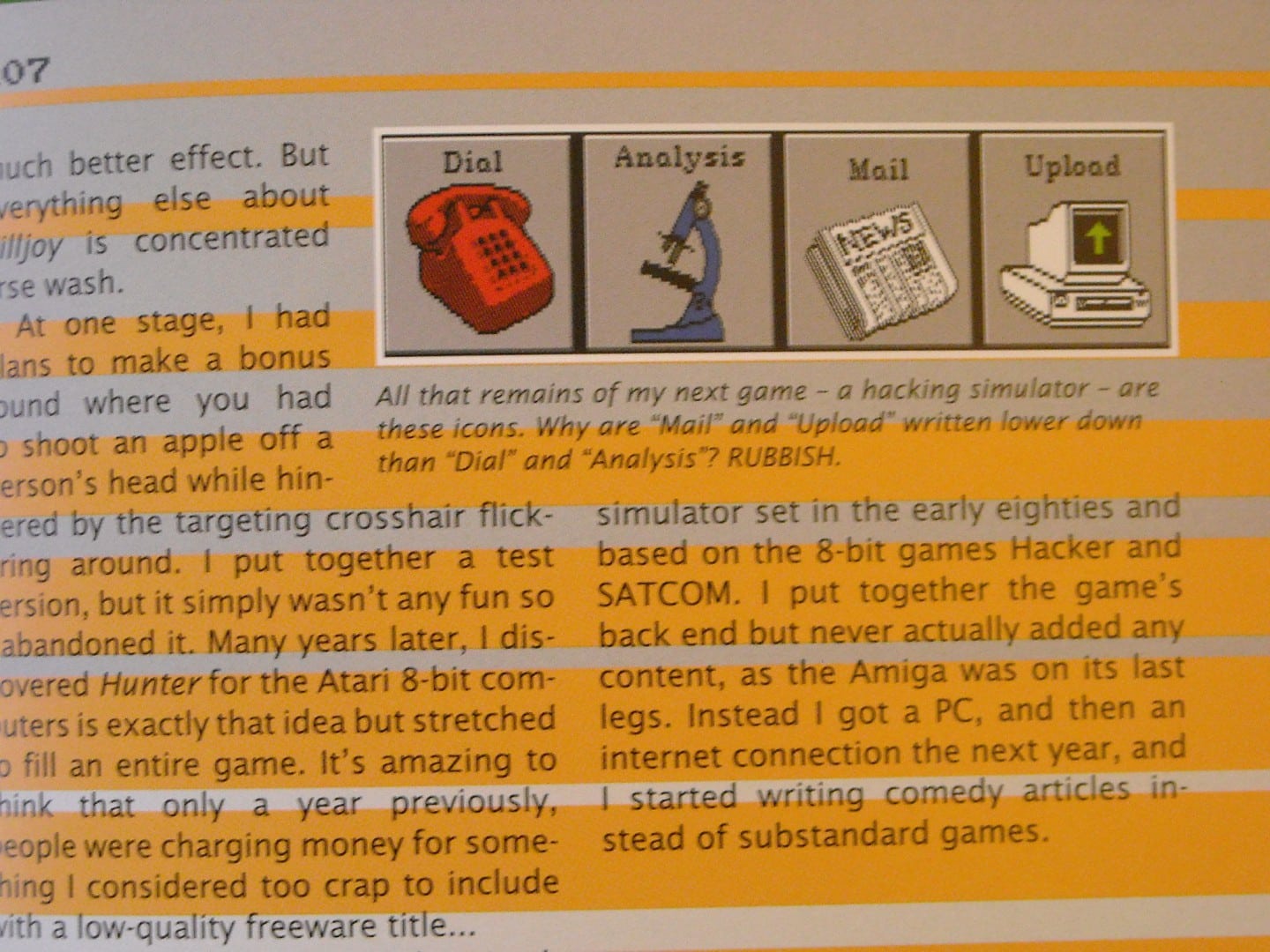 The book is also available on Amazon at this address.