The first thing i think of when i see the name SEGA is, of course, OutRun, for others, it might be Golden Axe, Space Harrier, Shinobi, Wonderboy, Afterburner and so on.  All of them Arcade classics/smash hits.

This book is about many of SEGA’s smash hits, way more than i knew about actually. SEGA ARCADE CLASSICS VOLUME 1, 170 pages filled to the brim with info about SEGA and its games.

This site is not about books really, but the other book articles have been very popular so i decided to do another book article. The book is from 2012 but i just recently acquired it. The book is about many of the SEGA games over the last 30+ years,  a few interviews and other tidbits can be found inside too. 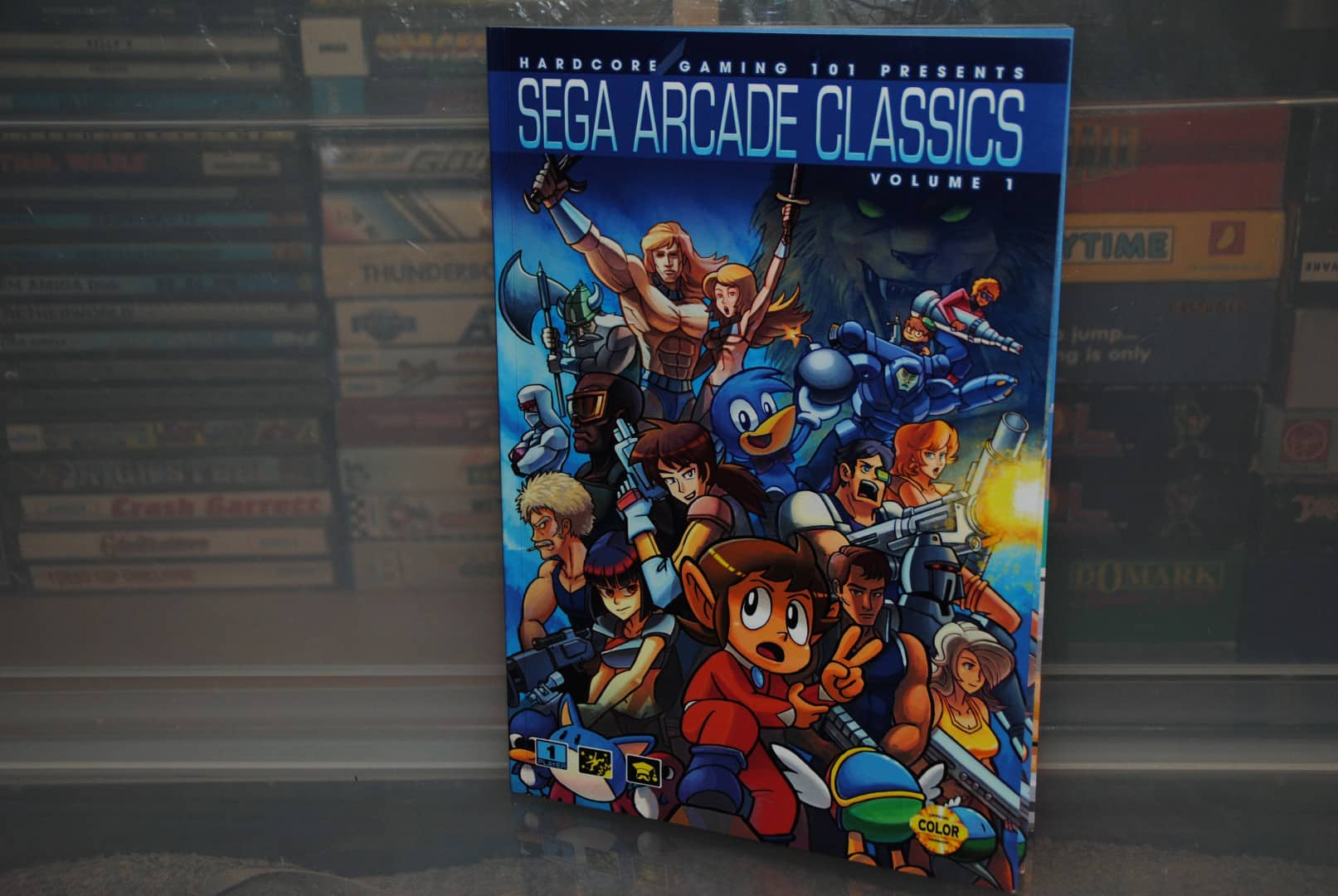 The first thing that struck me with the book was how awful the binding was, it was too stiff and a nightmare to read. Every time you flipped a page they just went back, and the further into the book you got, the more annoying this problem got.

To solve this problem was to bend the binding, and press the pages the whole time, after a few pages it all started to look bad.  It is a book so when you read it you should be able to do so without bending and pressing the paper all the time.

This book will not last long before the pages will fall out for sure.

What the hell were they thinking? 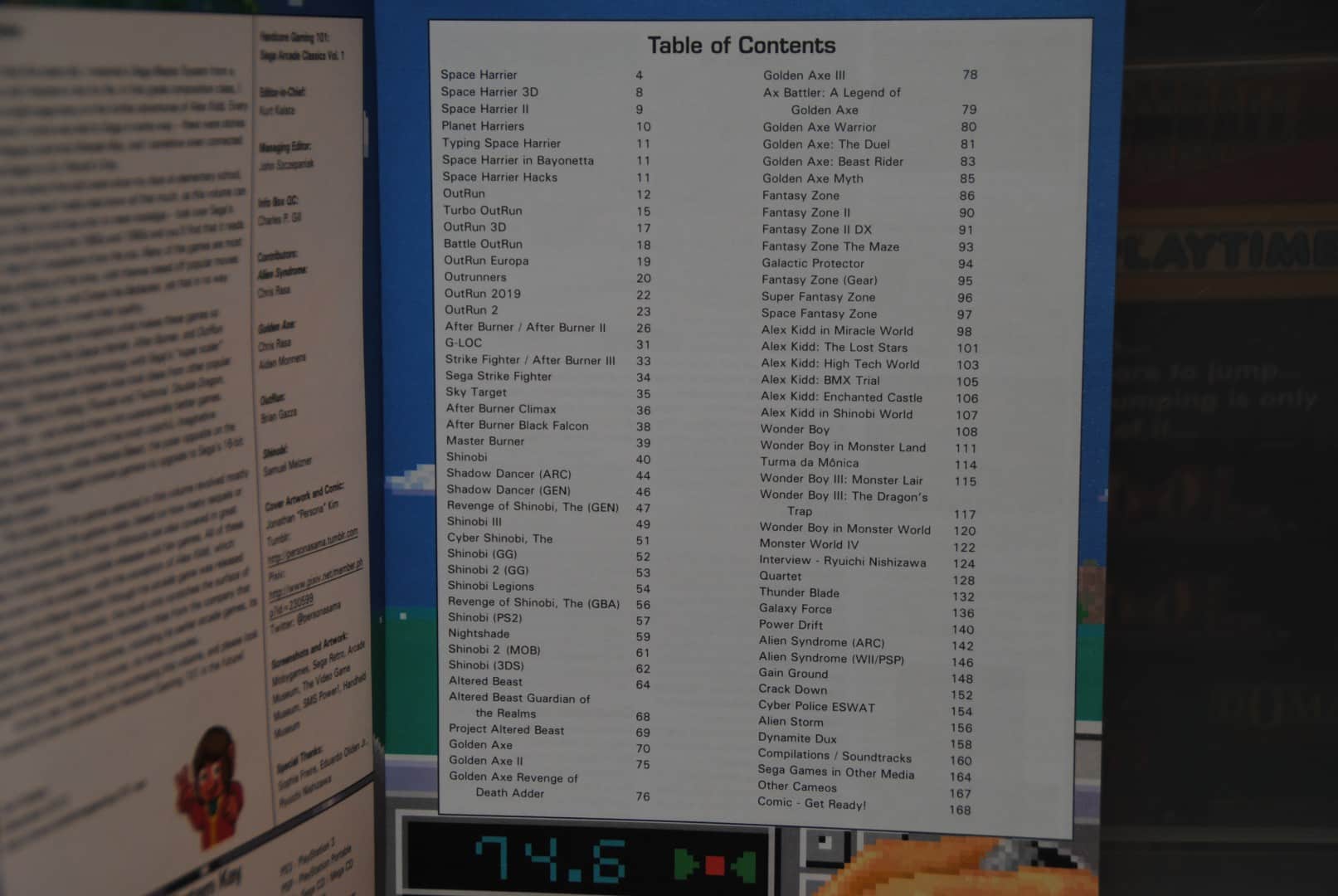 The game index of the book, a lot of games covered and while some games are listed on the same pages it is still far from annoying to read.

A huge bonus for me was of course how they managed to put an OutRun image in the background.

Suprise!, yep one of the first articles is about OutRun.A very nice comparison between formats as well as some background info and some decent shots.

By the looks of things none of the ports of the game goes unmentioned, they even included some points regarding how shit the Amiga version was.

Turbo OutRun article had some cool news that i did not know about, a huge fan as i am have never heard of how the game was possible to run in the original OutRun cabinet via an expansion board. 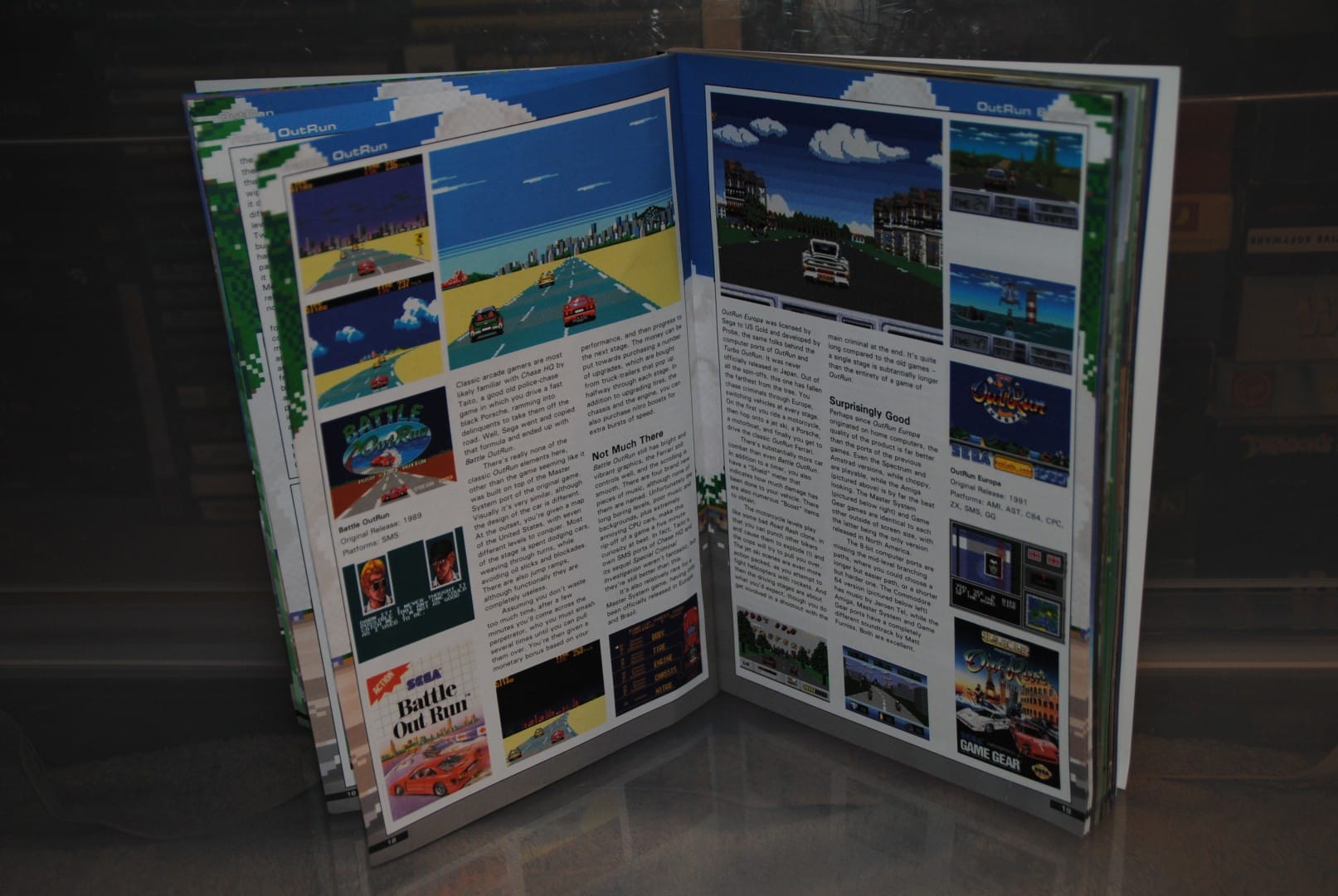 Battle Out Run and OutRun Europa pictured above, i have never tried Battle Out Run and while i want to i sort of do not want to try it, and it seems it was a wise decision too, thanks to some internet research and this book.

OutRun Europa is one of the better OutRun games in my opinion and it sounds like the book agrees with me.

Here’s another OutRun game that i have spoken a lot about before, yes OutRun 2. OutRun 2 is on my top 10 of all time games and every time i have the chance i talk about it, absolutely brilliant game and while i like that the game is mentioned in the book i still found it peculiar that there was next to no background information about the title and its dev cycle.

OutRunners is of course mentioned, but as i have said in the past (many times), i never liked the game. After reading yet another article about the game it seems i should try the game again, they hype it up like it is a real winner.

OutRun 2019 is also covered in the book and it is one of the few games that i did not know of before recently, not tried it yet and i have to say i am a bit interested in it although i am not sure i want to try it as the game was never meant to be an OutRun game in the first place. 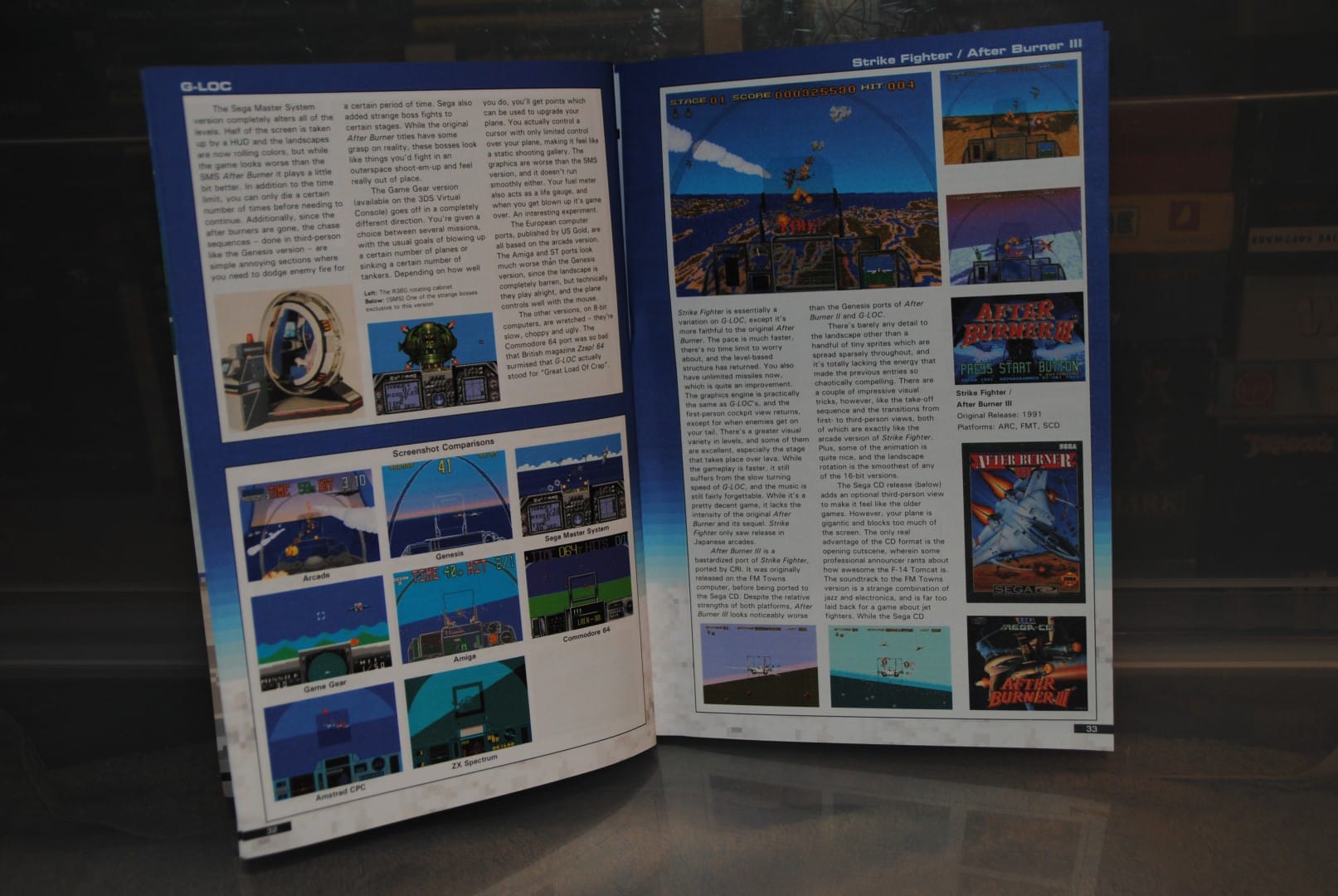 G-Loc is mentioned in the book too, was that a classic? , a horrible game if you ask me. The 360 arcades deluxe cabinet was insanely cool, and i guess that is reason enough for its included in the book. Some really cool info in the book about the game and its ports, i did not know the difference was that big between formats before now.

Afterburner III / Strike Fighter, what? ok, this book is certainly good when it comes to introducing me to new arcade machines.  Never heard of it, looks decent enough and yes i would love to try it. I doubt i will ever get to try the arcade itself, but i can always hope. 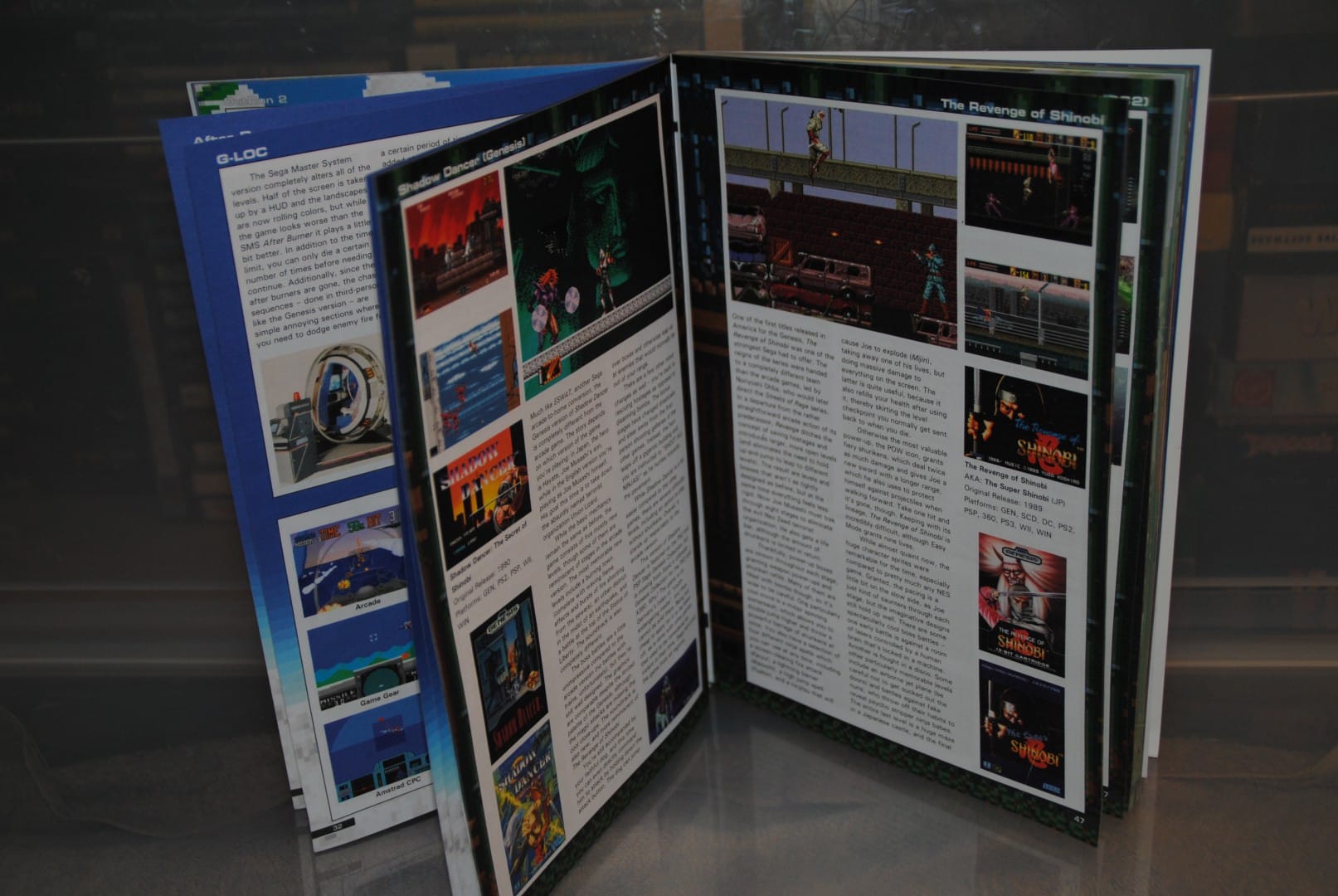 Shinobi, of course, Shinobi is mentioned in the book. The book presented me with a few new conversions and actual new games, none of them screams “try me” nor “classic” in my eyes, but cool that the book still mentioned them along with its offsprings (Nightshade among others (which btw is a kick-ass good game). 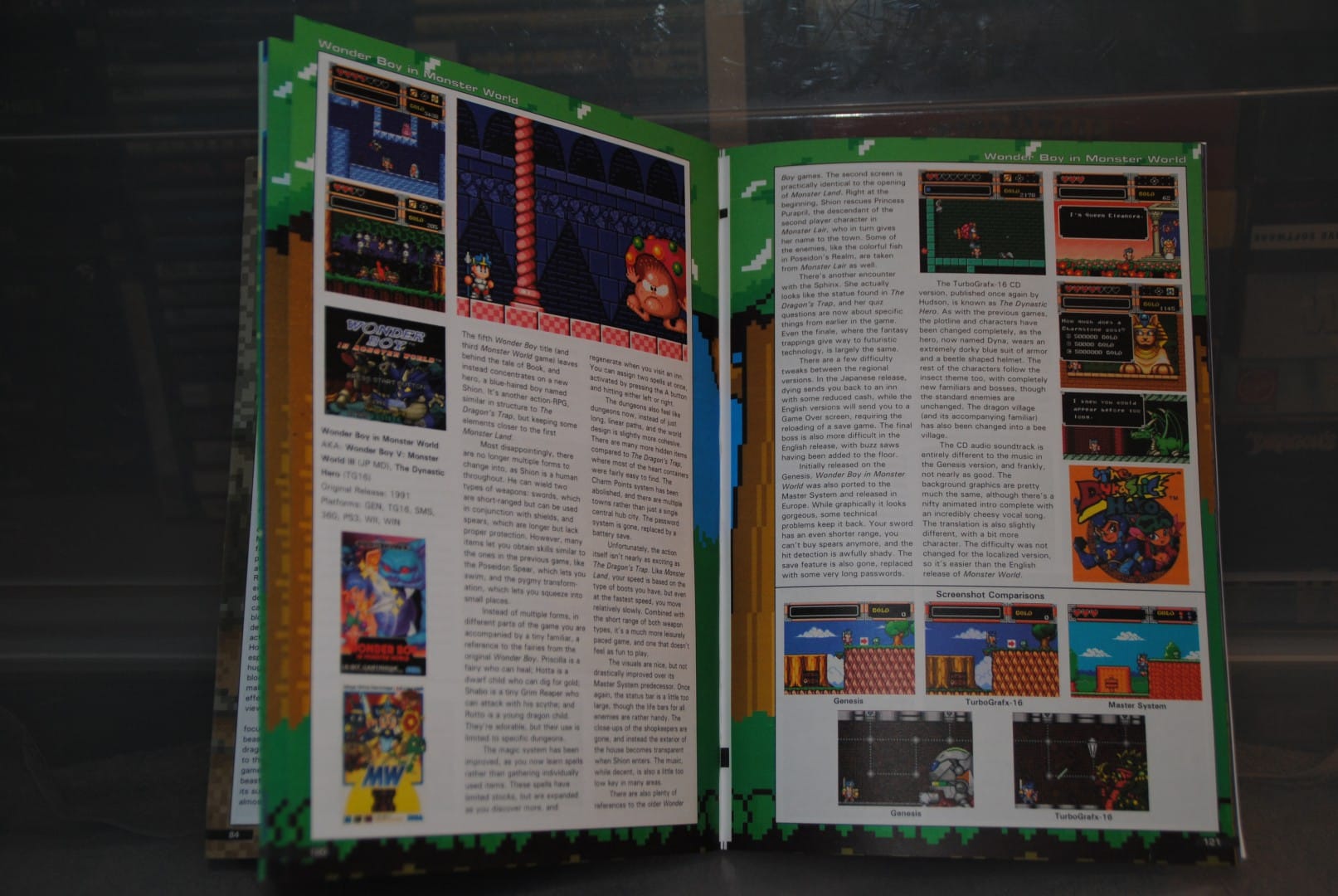 Wonderboy, a Sega classic i first met through bootleg and copies only. Really cool how they included info about Thunder Boy, a game that was more than a blatant copy of Wonderboy than Great Giana Sisters was to Mario brothers. TimeWarp made both GGS and Thunder Boy, of course, sadly Thunder boy was absolutely pants (unlike Giana Sisters..).

One has to wonder why Wonderboy has not been rebooted, imagine the series rebooted with similar love and attention to details like Bionic Commando Re-Armed got.

Golden Axe, a lot of titles in the series, a lot of them that i have never heard about, sadly most of them seems rubbish to say the least.

The book covers some of the history regarding Golden Axe 2 and 3 and why some ports never came out and why the others were not identical to the originals, a interesting read. 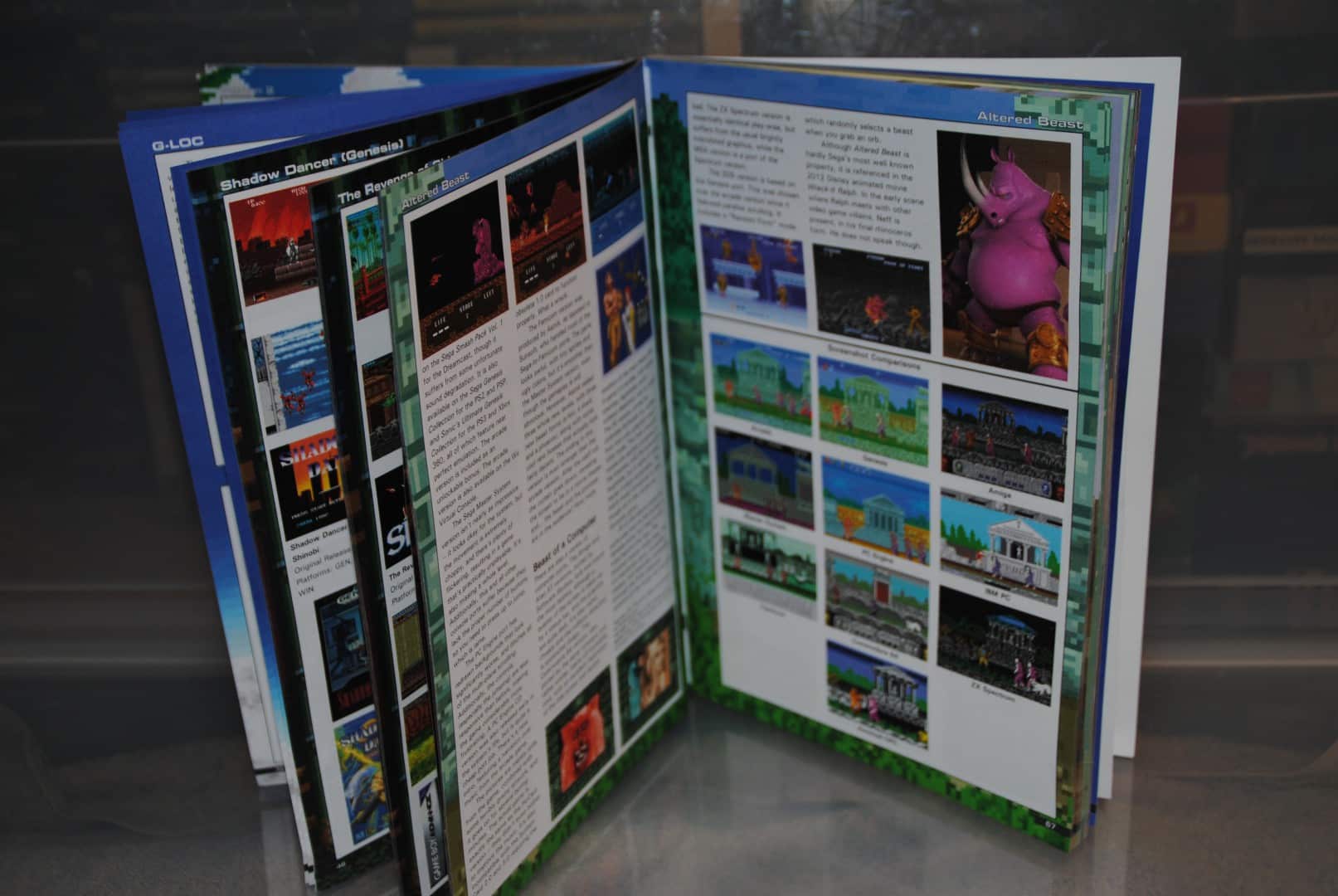 Altered Beast, the article here had some really nice tidbits in it, how they included one of the bosses from the game in the movie Wrecking Ralph and i finally got confirmed that the game has very different quality between formats.

I could go on forever really, lots of great games in the book and lots of small hidden info about the dev cycles and how and why some games never materialized on consoles and computers.

The following has been edited because it is wrong: Shocking to see Sonic not mention in here, i do understand it as Sonic was never turned into an arcade game so that is the real reason for sure.

There was actually an Arcade game released, i don’t know too much about it yet, but i have to wonder why it is not mentioned in this book. (Thanks Aaron Miller)

If the book had not had that horrible binding and the odd bad article then the book would rank pretty high on my list of better books, instead it lands on mediocre and a lost opertunity. The name of the book indicates that it is more books to come, so let’s hope that will happen one day.